Not A Mickey Mouse Concert Venue 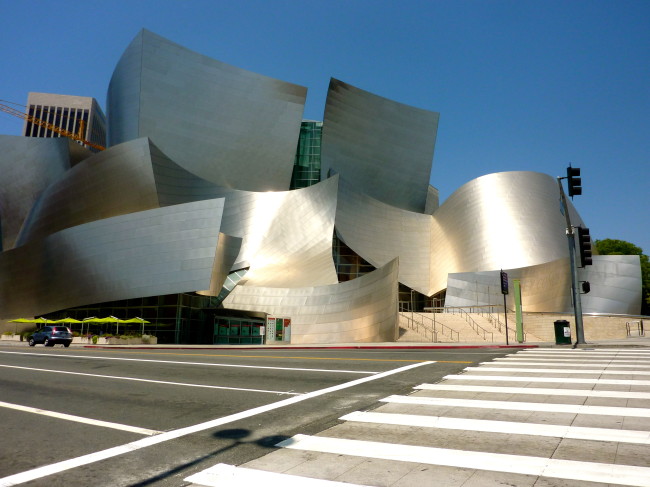 Tracy and I had recently been to a Walt Disney Hall concert featuring Mozart and Brahms (well, it was their music…it would be quite an event if Mozart and Brahms really showed up), so when we were downtown recently, we just planned to walk around a bit to take in its unique architecture. 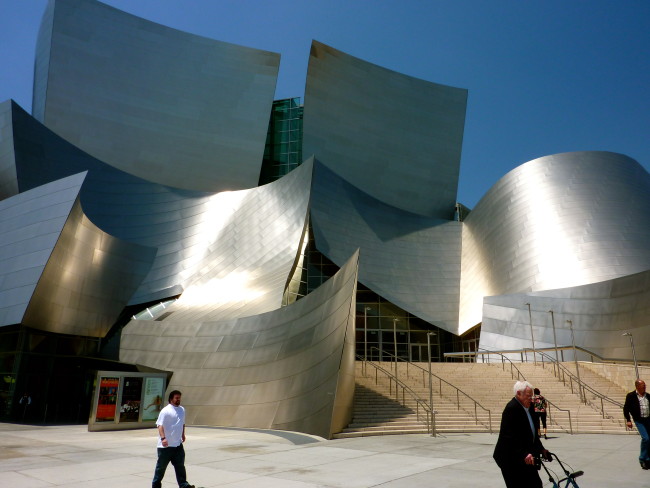 Since I was attempting to lose weight (which is most of the time), I ran (ok, walked quickly) up the numerous stairs to where the garden is located. I saw people with headphones on, so after (slowly) coming back down, I said to Tracy, “Let’s see how much the audio tour costs.” 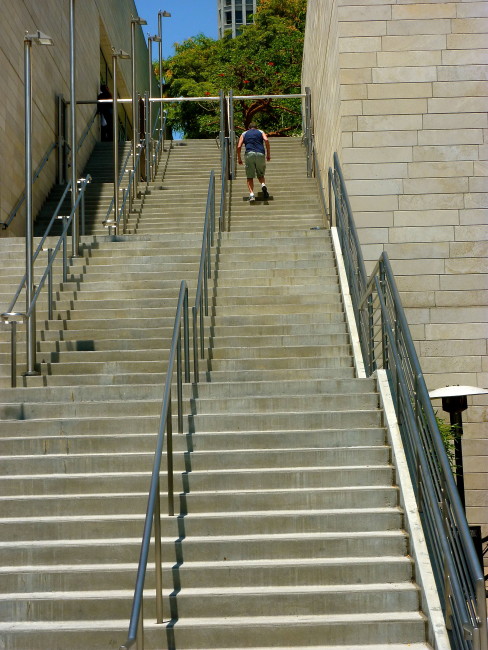 Once inside we received the remarkable answer…”Free!”  So off we went on about a 60-minute audio tour narrated by John Lithgow. 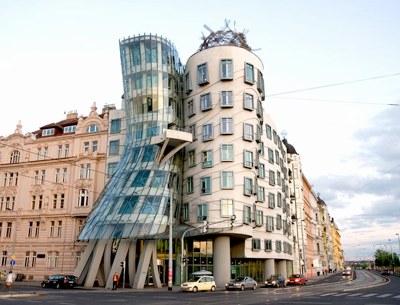 Walt Disney Concert Hall was designed by Pritzker Prize-winning architect Frank Gehry (designer of The Dancing House..above… in Prague…photo from website). The concert hall is part of Music Center’s collection of performing arts venues. Walt Disney Concert Hall is home to the Los Angeles Philharmonic and the Los Angeles Master Chorale. Walt Disney’s wife Lillian donated $50 million dollars, but it went way beyond budget…way beyond ($274 million). It opened up in 2002. 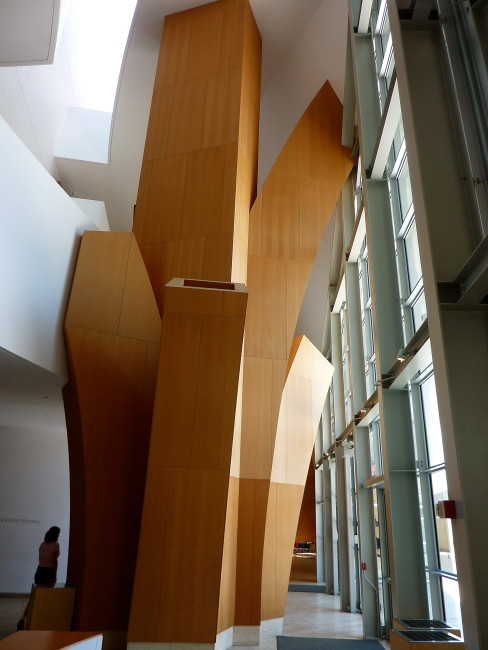 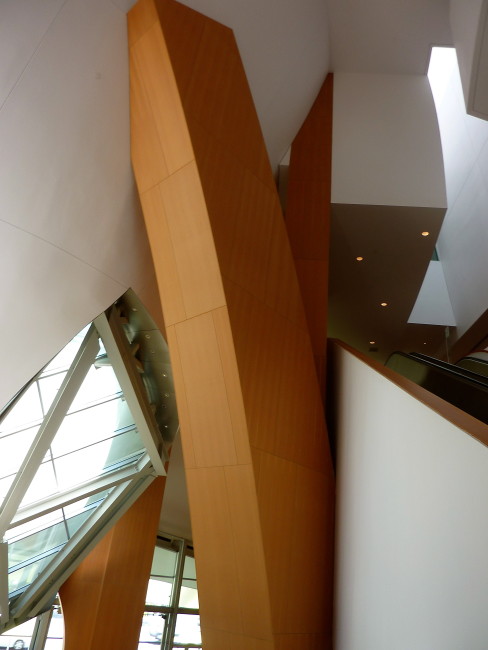 The first thing you notice are the huge Douglas Fir Tree Columns. From the website: “The columns contain the inner workings of the building and deliver air conditioning and lighting to the main lobby. The “tree trunks” are an example of Walt Disney Concert Hall’s dialogue with nature.  Throughout the hall, you’ll see how architect Frank Gehry has incorporated Lillian Disney’s love of gardening.   She once told Gehry that she wanted the hall to feel like a little old cottage in England covered with vines.” 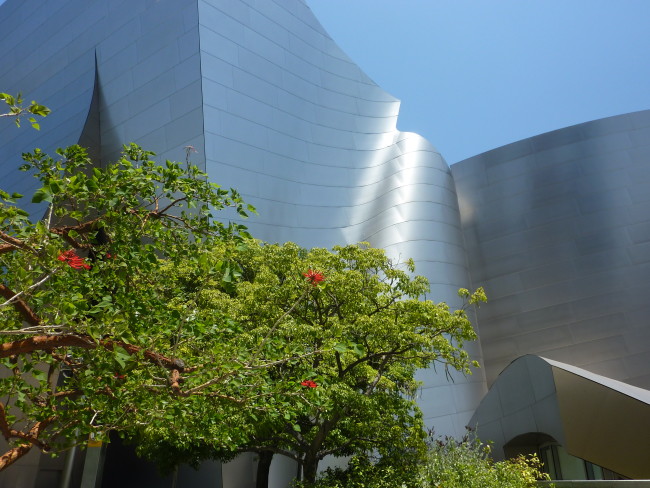 Hard to believe in looking at it now, but Gehry originally wanted the hall to be covered in stone. He changed his mind and decided to use stainless steel. There was one pretty big problem after it was built…shortly after Walt Disney Concert Hall opened, residents of neighboring condos discovered that the glare from the building’s stainless steel heated up their rooms by as much as 15 degrees. The concert hall had to dull the surface and reduce glare with a new finish. 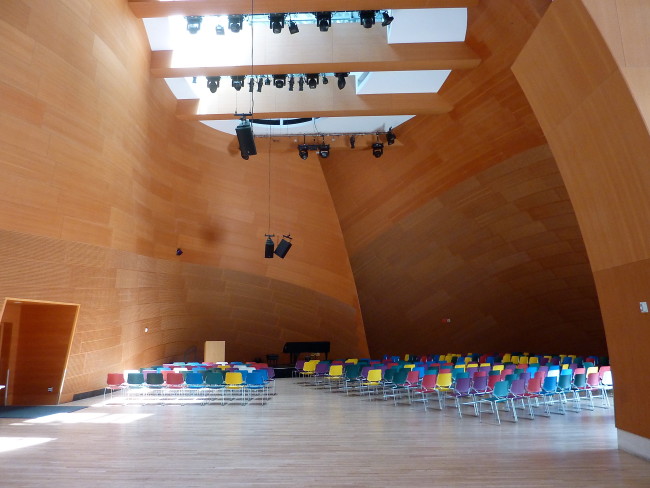 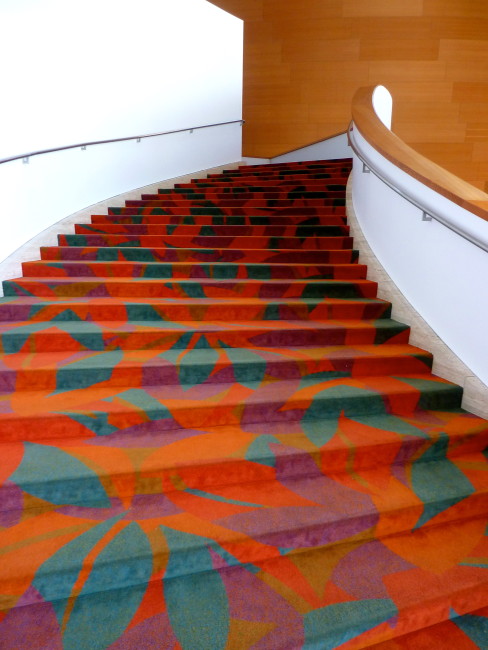 We walked past BP Hall (where pre-concert talks are held) and saw the Henry Mancini Stairs (yes, donating money has its privileges). 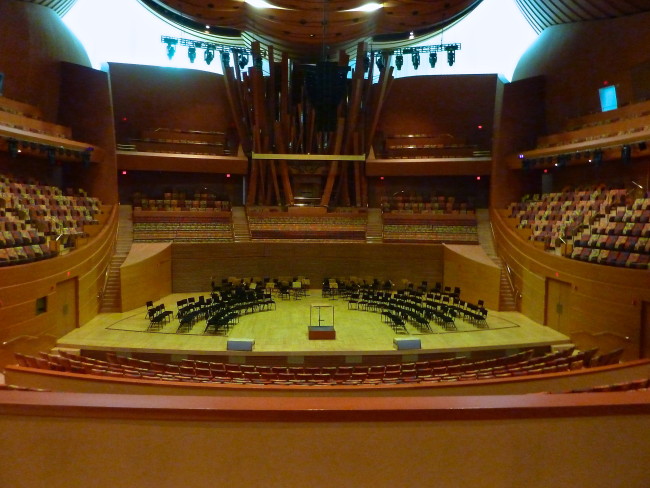 Because no concert was going on we were allowed to visit the auditorium with its giant organ. 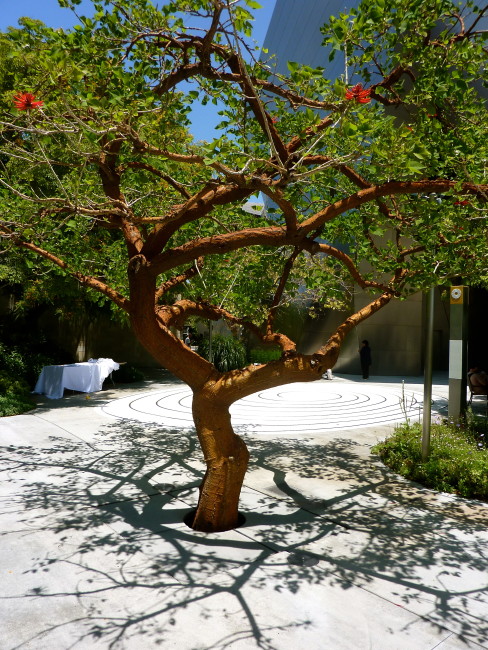 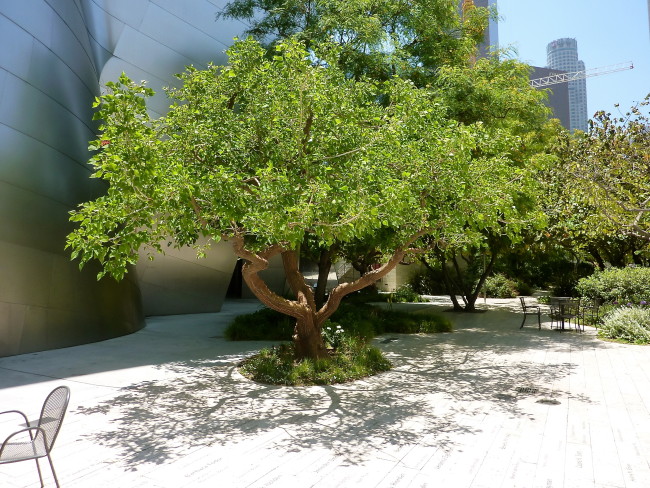 We exited outside into the garden that has 45 trees. 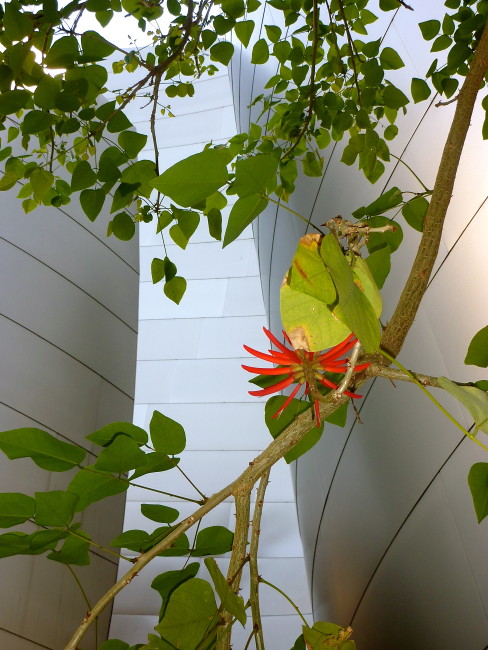 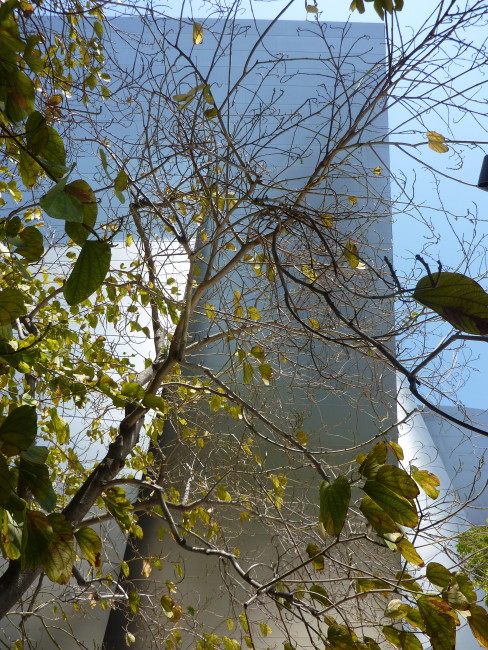 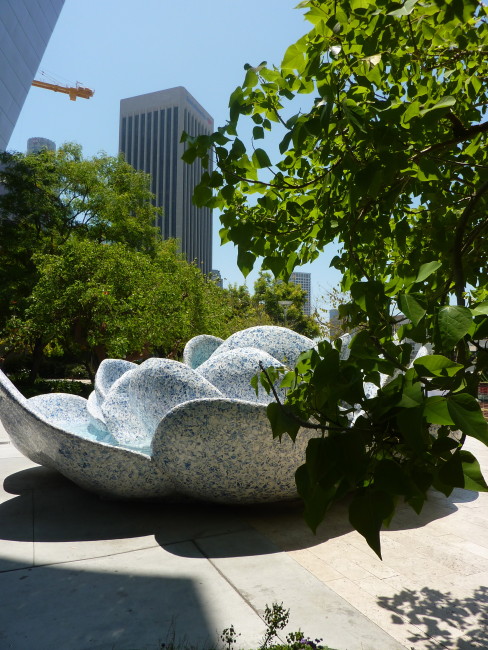 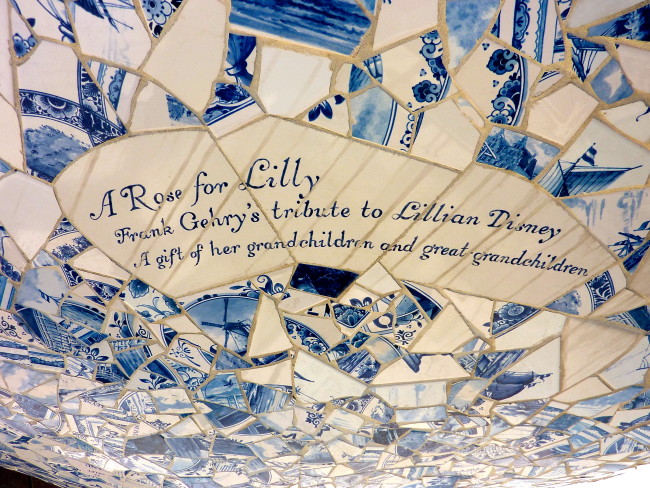 The centerpiece of the garden is the A Rose for Lilly Fountain specifically designed as a tribute to the hall’s initial donor.   Knowing that Lillian loved Royal Deft porcelain, Gehry and his team broke more than 200 vases and 8,000 tiles to create a mosaic for the fountain. The Dutch government would not sell the cheap stuff (which lillian loved) to them, so they had to use the expensive stuff. 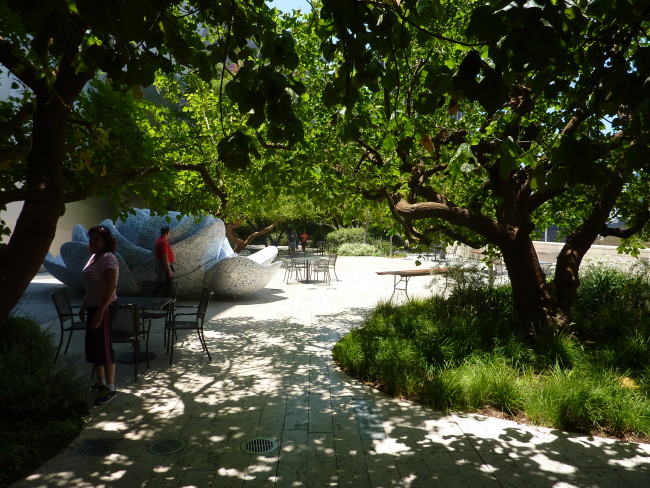 Even with a team of eight artists working nearly seven days a week, it took more than four months to complete the fountain. 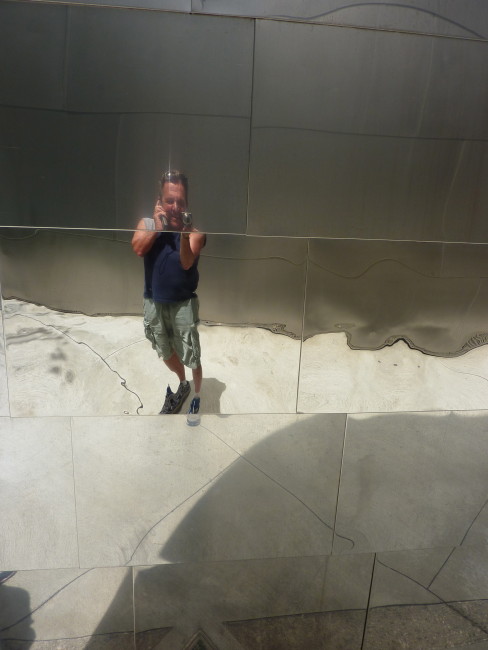 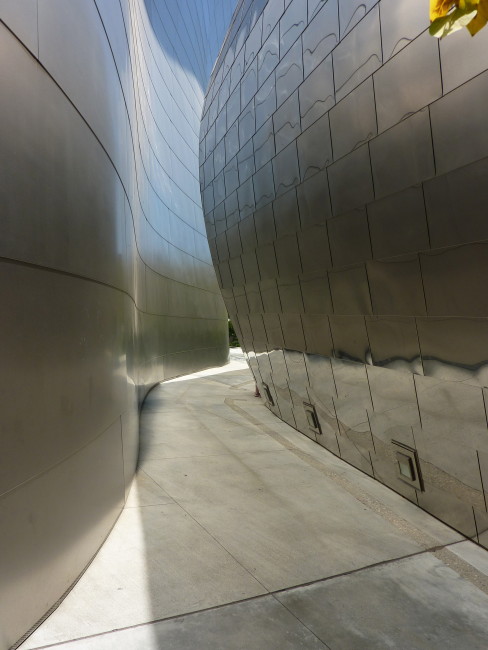 Walking through some of the smaller spaces was almost like being in a Funhouse. 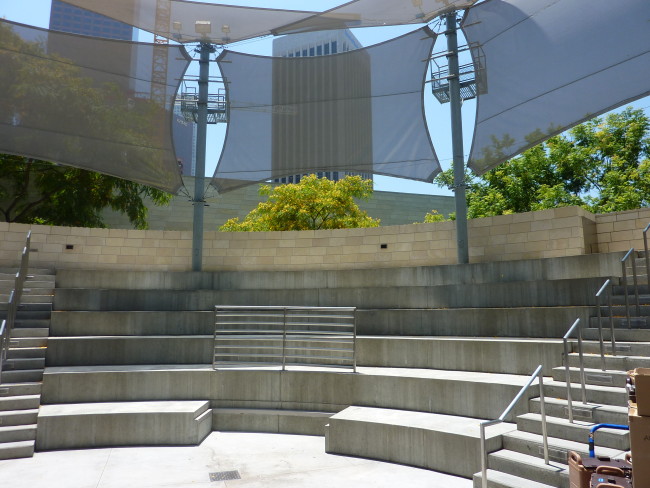 Next stop was the amphitheatre where they hold outdoor seminars and other events. 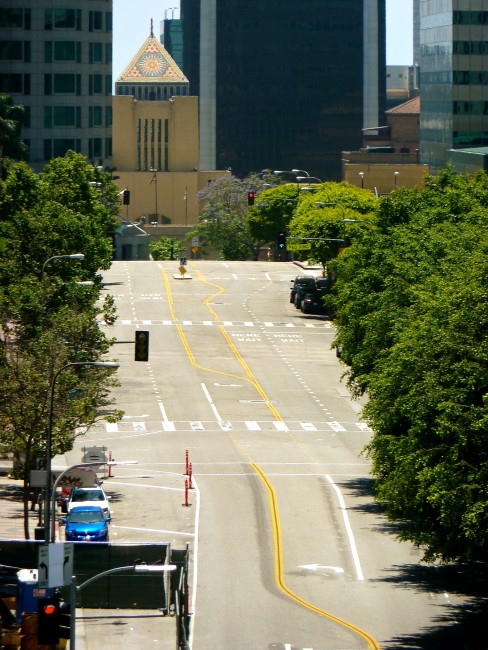 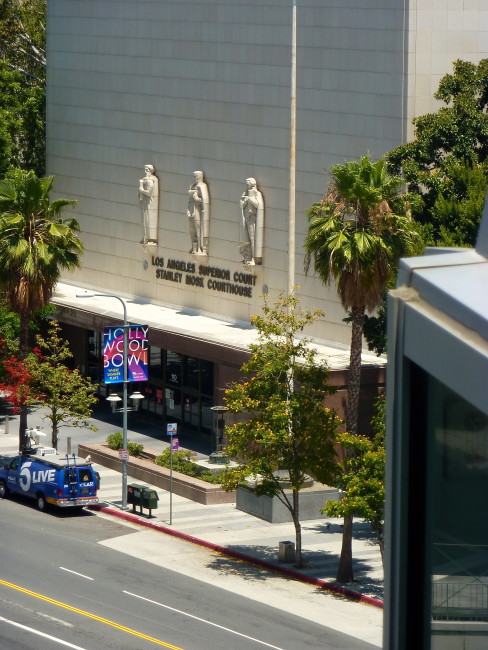 Gehry wanted there to be great views from to the concert hall’s neighbors.  It sits modestly within the city. We looked down to the Los Angeles Central Public Library, another  L.A. spot you should visit, and also down at the Los Angeles Superior Court House. 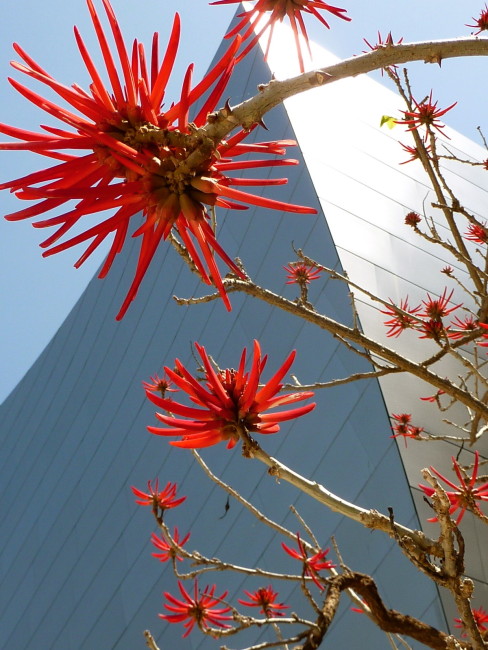 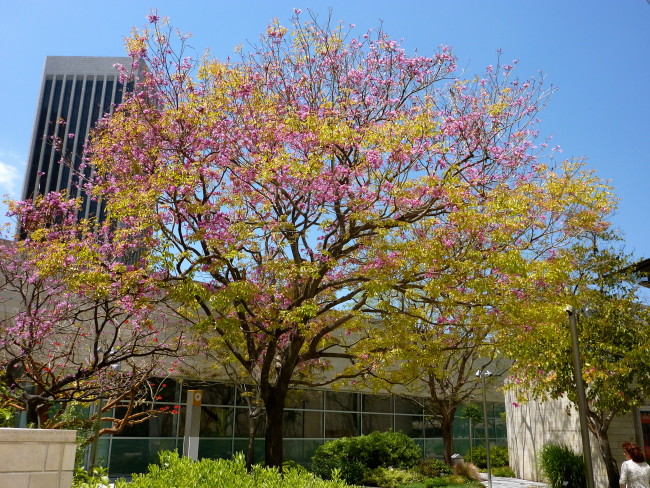 There are also the free guided tours, and I highly recommend seeing a concert here if you get the chance.  The prices aren’t cheap for concerts, but it is worth the money. 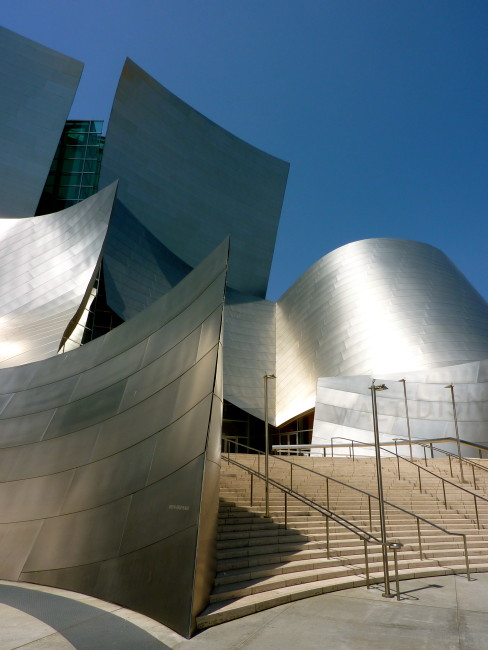 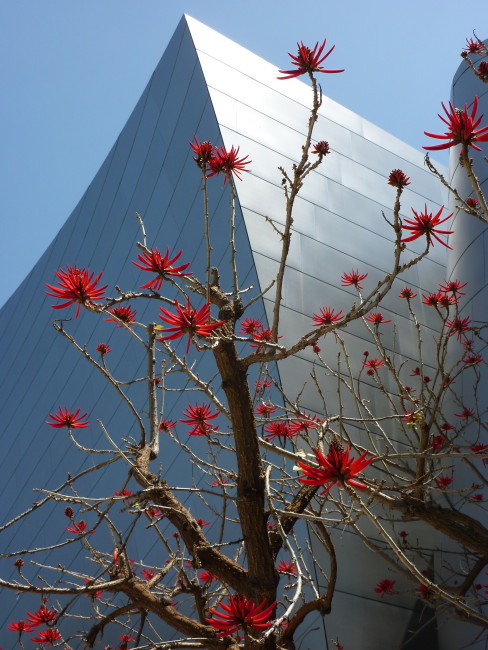