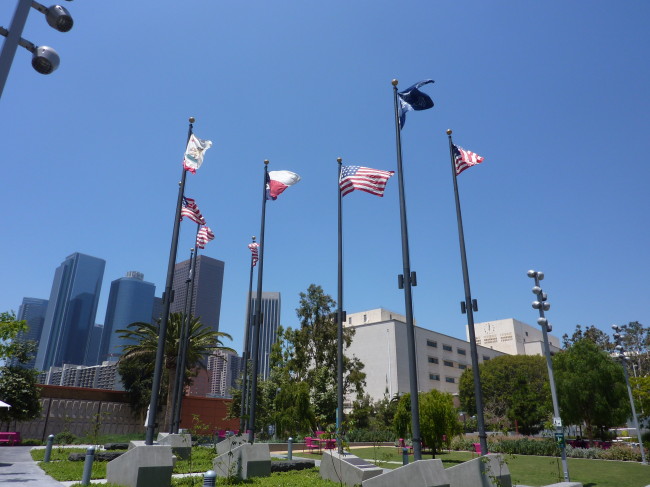 I often hear people ignorantly spout off and grouse, “There’s nothing to do in downtown Los Angeles on the weekend.” 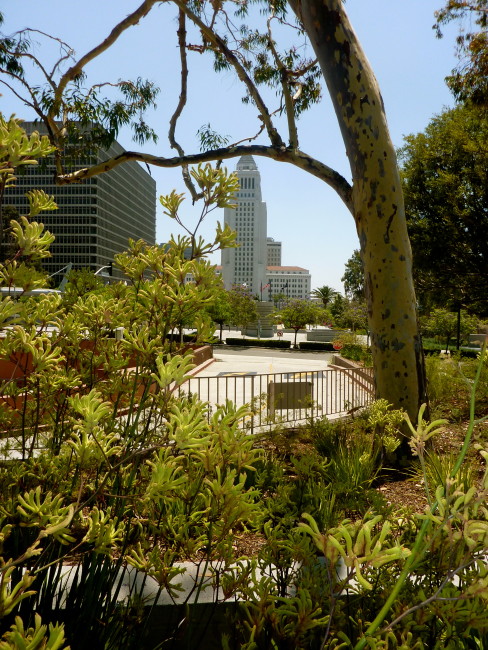 When I hear that, I reply, “Look around, there’s plenty to see and do if you do your homework.”

From the Walt Disney Concert Hall to the Cathedral of Our Lady of the Angels to the famed Biltmore Hotel and much, much more, there are plenty of things that will more than occupy your time during a day in Los Angeles.  Each year, I find more and more interesting things to do in the city.

One relatively new addition to the L.A. landscape is Grand Park: The Park For Everyone that stretches all the way from the Music Center on Grand Avenue down to City Hall on Spring Street.  Somehow I had never heard of it (although it opened in the summer of 2012), but Tracy works downtown, so she took me on a mini tour of the park that came with a $56 million price tag ($50 million came from developer Related Companies).

The park crosses four blocks between First and Temple streets from Grand Avenue to Hill Street.  It links City Hall to the Department of Water and Power Building with a performance lawn, a restored historic fountain, a café, walking paths gardens and, of course, a Starbucks.  It encompasses 12 acres.

According to the park website: “A city’s urban heart is an expression of its people, its diversity, its interests, and its passions. The new Grand Park, with its majestic views extending from the Music Center to City Hall, provides Angelenos of all walks of life a place where they can come together to celebrate, reflect, and shape the future, in one central gathering place.”

We started our walk at the Los Angeles Superior Court Stanley Mosk Courthouse with interesting bas-reliefs on its façade. 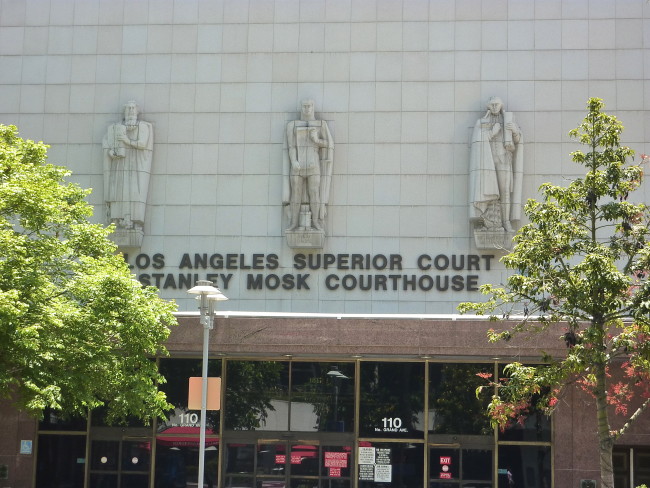 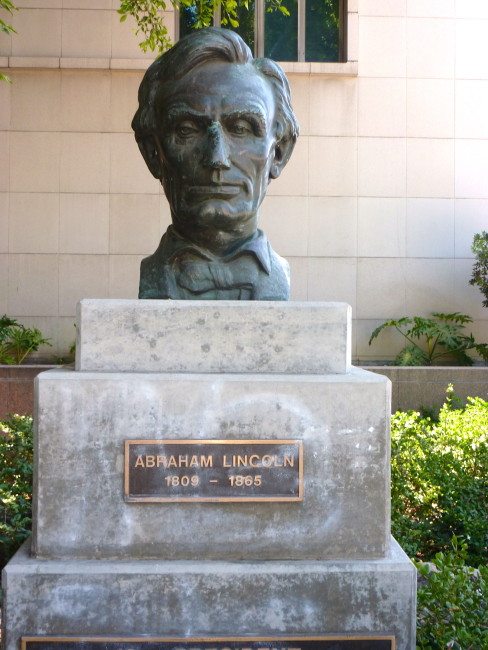 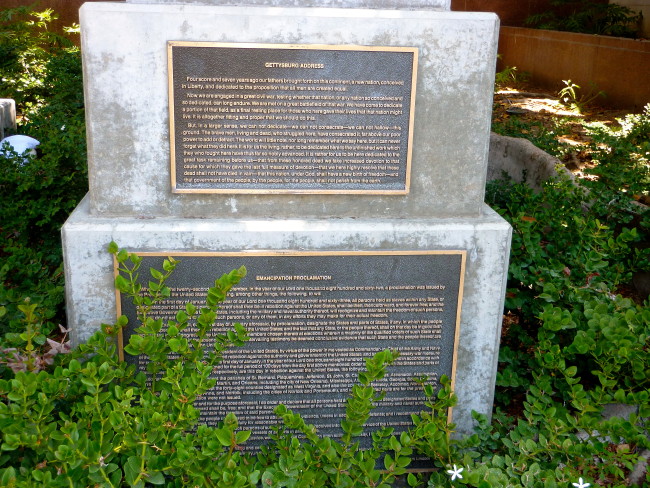 …and a statue of  “Mr. Los Angeles,” Joseph Scott (I had never heard of him either, but it turns out he was a British-born attorney whose “service to the community was so varied and important that he earned the nickname ‘Mr. Los Angeles’”…who knew?). 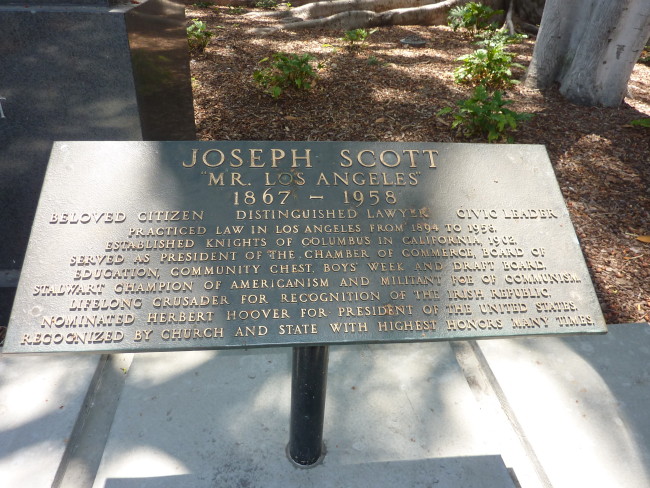 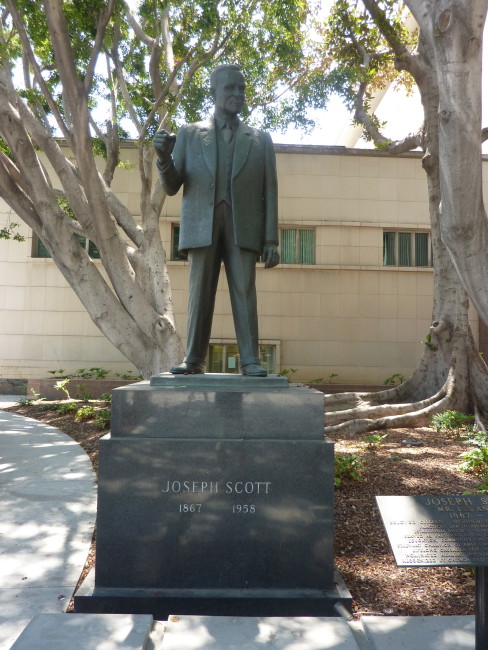 A few more steps and we were at the entrance to Grand Park and looking down toward City Hall four blocks away.  The sign welcomes people in numerous languages. 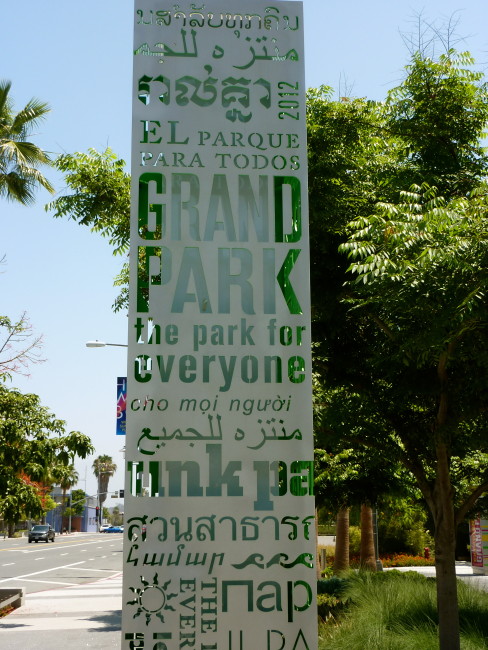 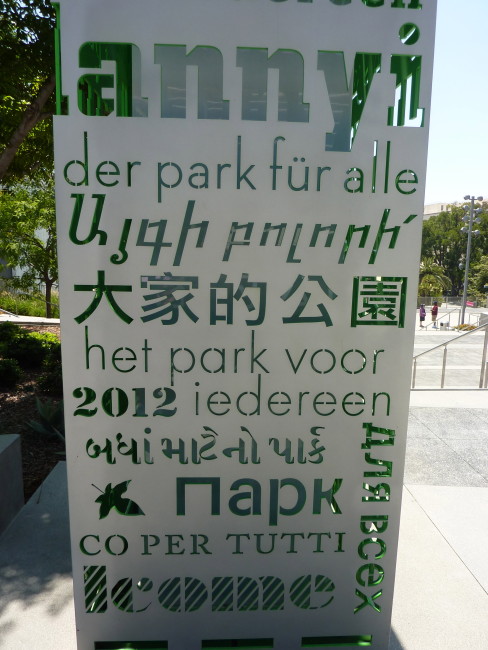 The view down to City Hall when you walk in across from the Music Center immediately catches your eye. 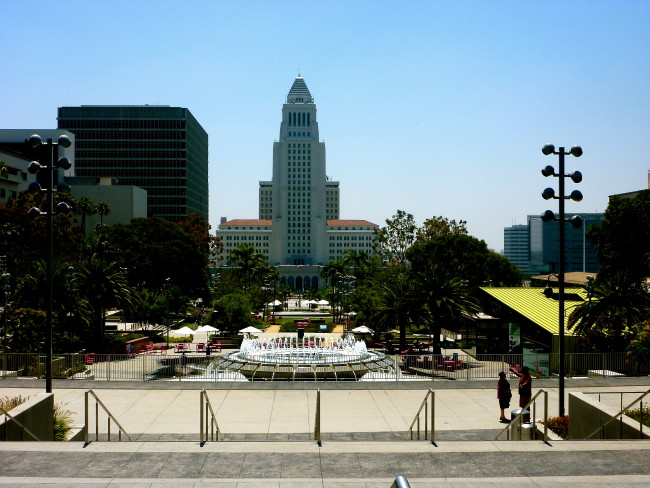 Kids and their parents were frolicking (and sometimes falling) in the fountain that would shoot out in bursts. Others just sat at tables enjoying their Starbucks, conveniently placed for downtown caffeine addicts. 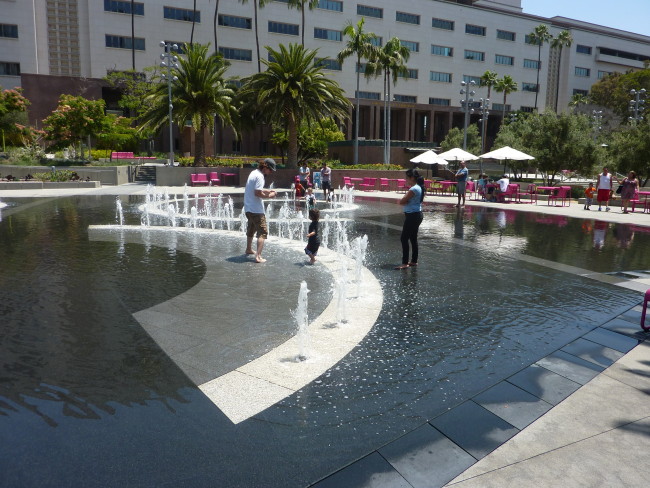 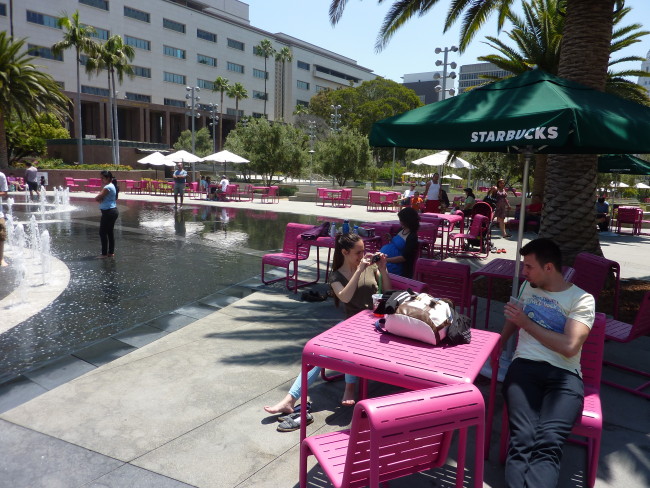 One thing that catches your eye is all the pink furniture, many that are movable. 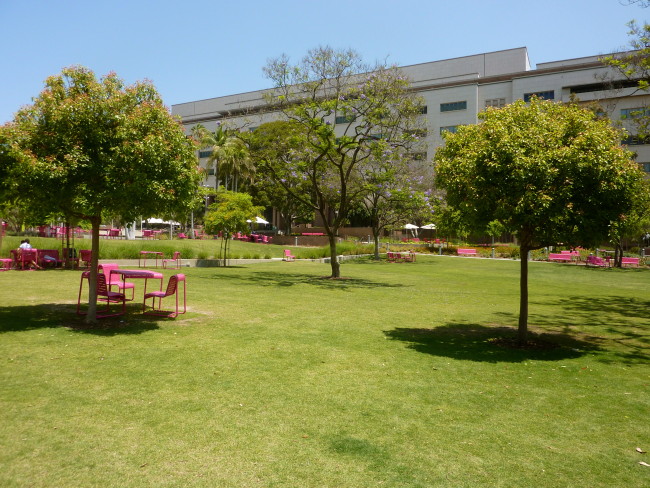 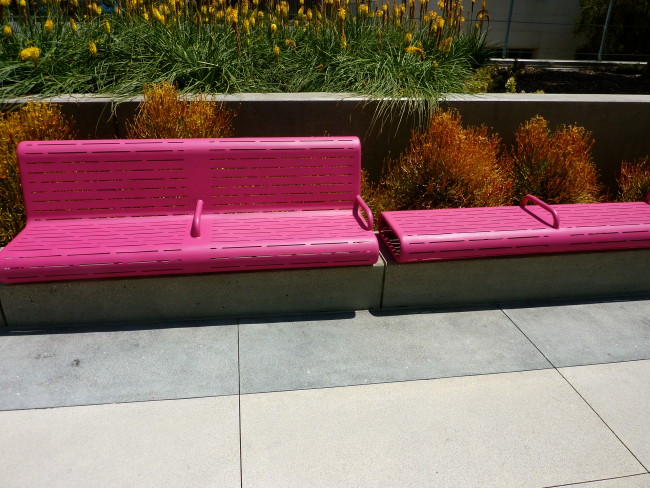 As we wound our way toward City Hall, we passed the Neotropical Garden and a statue of Thomas Jefferson. 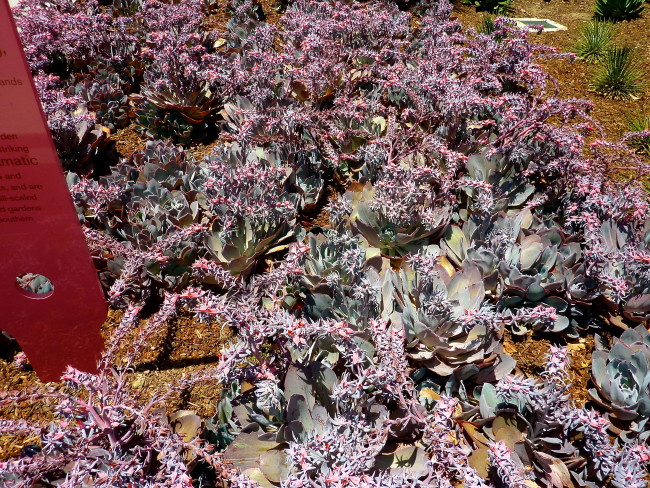 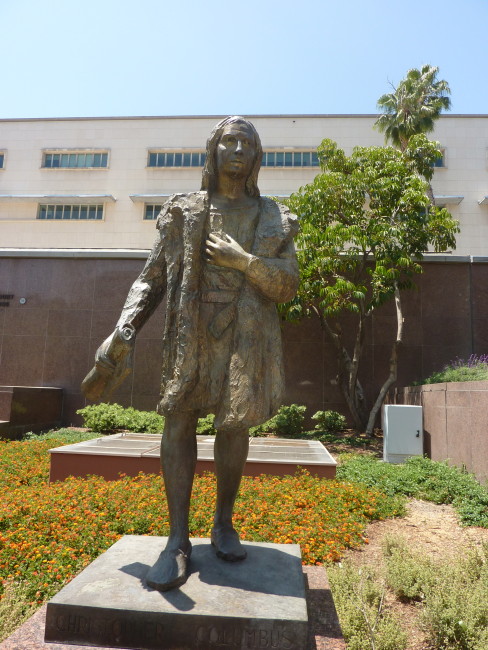 Crossing the street, we got a great view of Los Angeles City Hall (completed in 1928…you can read more about it on another of my posts) and we found ourselves in The Court Of Historic American Flags. 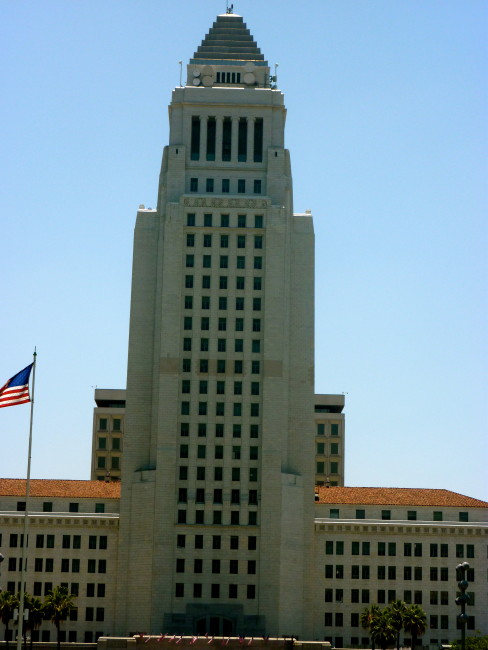 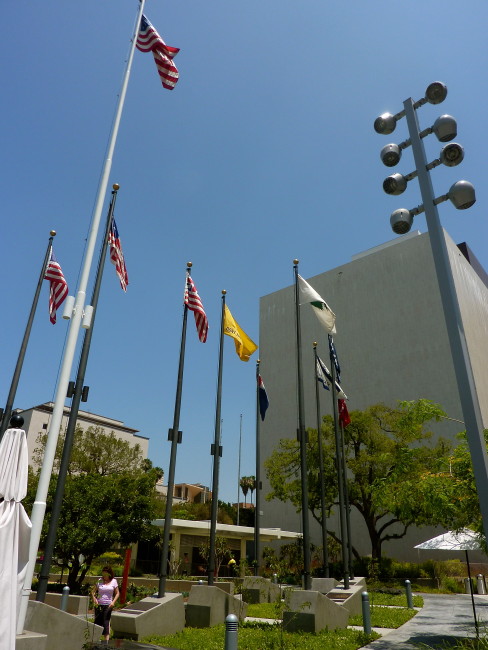 One of the flags was the Bennington Flag, first flown at the decisive Battle of Bennington in the Revolutionary War.  This flag is the oldest stars and stripes still in existence (1777) and perhaps the first ever displayed.  Next to it stood 1777’s Betsy Ross Flag. 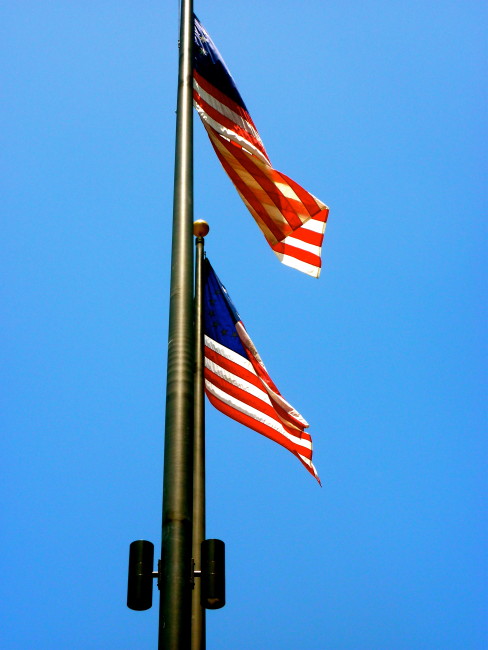 Another flag waving in the slight breeze was the Taunton Flag that dates from 1775.  It is symbolic of the widening gulf between Great Britain and her American colonies.  The Taunton Flag was first raised by the towns-people of Taunton, Massachusetts. They inscribed the watchword “Liberty” upon the meteor flag of England. By doing this, the colonists dramatized their sentiments of loyalty to the homeland and resistance to the government by the British. 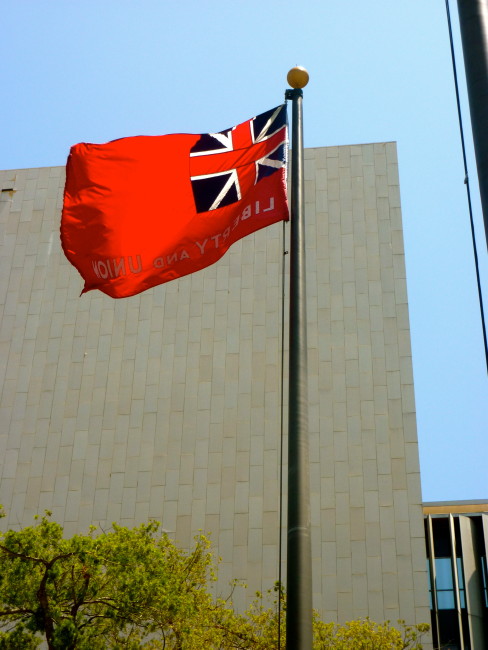 In the The Court Of Historic American Flags, there was also a tribute to those who served and perished in Vietnam. 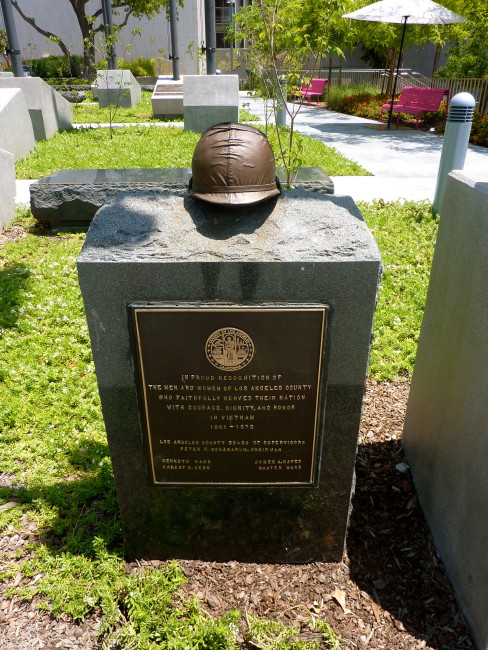 Walking back up toward Grand Avenue, the Music Center was in the distance as we strolled past the statue of our first president.  Nearby was a memorial to the 1930s famine in the Ukraine that killed more than two million people. 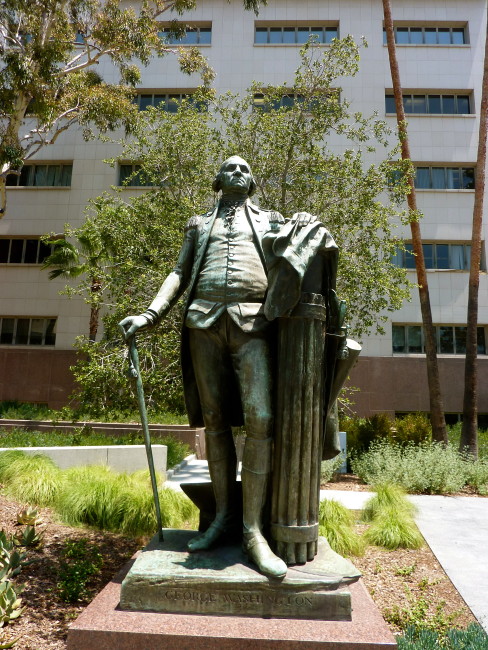 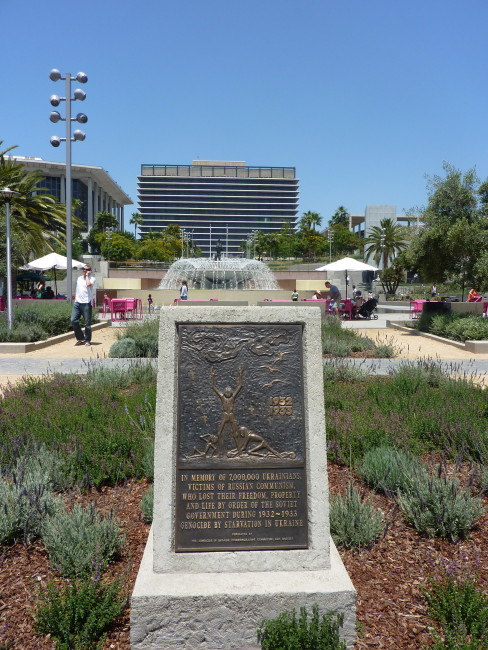 There are lots of night time events at Grand Park (this photo from internet shows how beautiful it is at night).  It’s amazing to think that 30 years ago I wouldn’t want to walk in this neighborhood at day, much less the night. 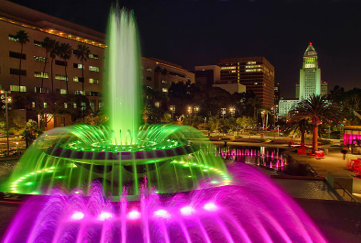 There seems to be a decent security presence at Grand Park, so hopefully the Occupy L.A. people won’t screw this place up.  It’s there for people to voice an opinion, not ruin property. If you are downtown, Grand Park makes for a nice half hour to an hour stroll, or maybe even stop and have yourself a picnic.  One downside: There’s not a lot of shade, so on a hot day take one of those movable pink pieces of furniture and place it under a tree…or go hop in a fountain. 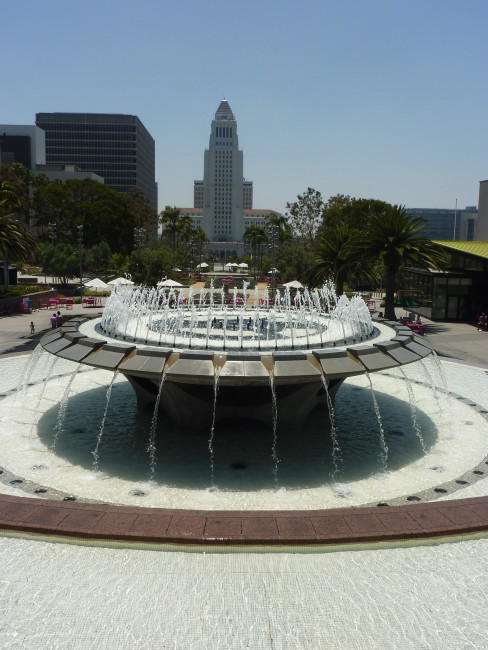