In Search Of The Perfect Chicken Enchilada 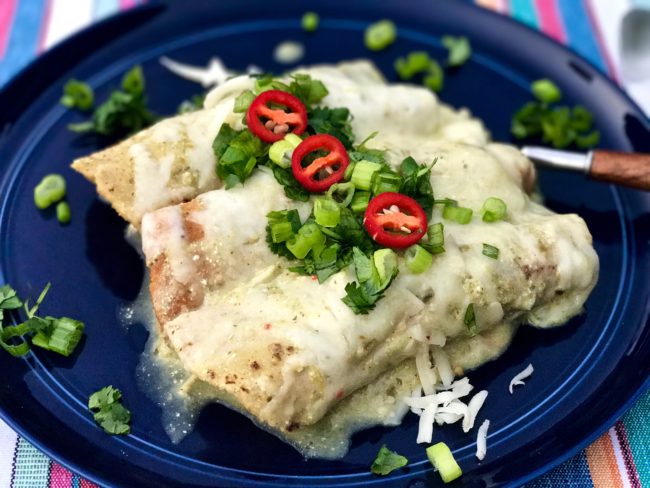 What’s a girl to do when her husband brings home a haul of Extra Hot Hatch Green Chiles courtesy of the very generous Melissa’s Produce?  Roast them!  Tom was once again fortunate to be included in an event at Melissa’s Produce, this one featuring La Tortilla Factory.  Not only did Tom score the Hatches and get to taste the scrumptious food, but he also brought home a bunch of La Tortilla Factory’s products, too. 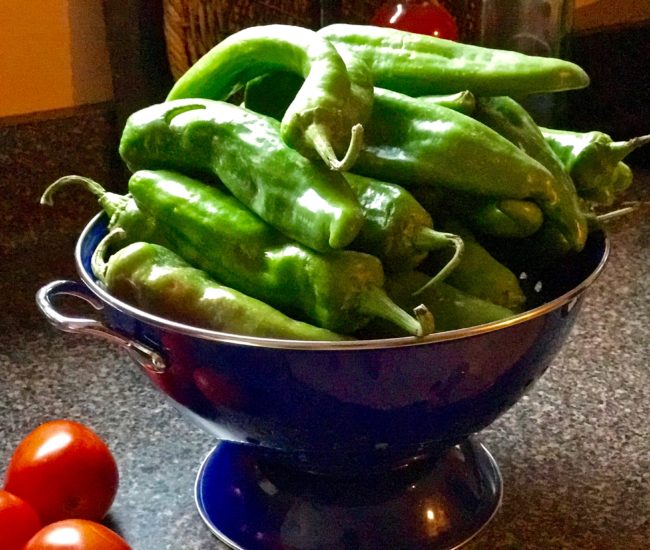 If you haven’t had an opportunity to taste La Tortilla Factory tortillas, you must hunt them down.  I love, love, love their Original Flour Tortillas in a quesadilla.  And the Hatch Chile 50/50 Corn + Flour Crisps are the bomb.  I scooped up some of my Caramelized Pineapple Ghost Pepper salsa with those chips and…Wow!   And just so you know, neither Tom nor I have been paid by Melissa’s or La Tortilla Factory … but we loved them so much I have to share.

Jenny Tamayo, whose grandparents founded La Tortilla Factory, spoke first about the company’s products. One of the recipes featured at the event was for Hatch Enchiladas Suizas.  This enchilada recipe is from Marco Zapien, chef and owner of Zapien’s Salsa Grill and Taqueria in Pico Rivera, who also performed a cooking demo. 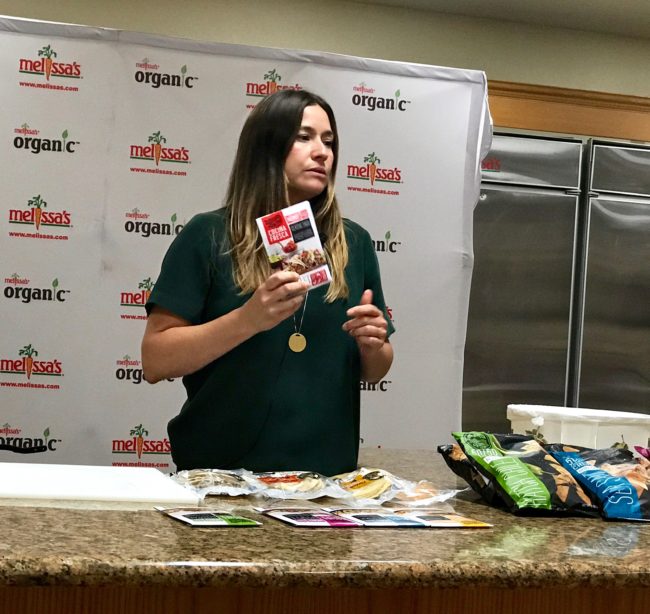 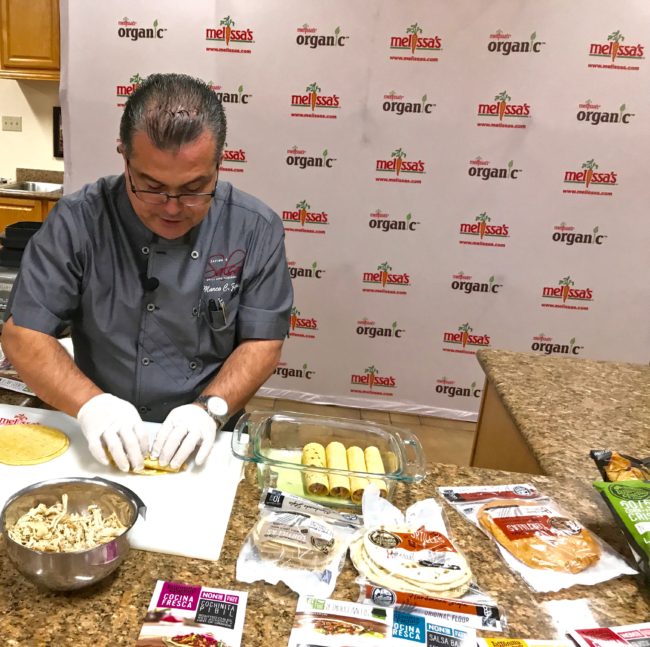 Tom came home and pleaded with me to make this for him as he enjoyed it so much.

Seeing that I needed to use up some of that Hatch haul, I gladly said “yes.”  At the event, they used three different types of La Tortilla Factory tortillas (Yellow Corn & Wheat; Original Flour; and Smoky Chipotle Chile).

Over the years, I have tried many brands of tortillas, but have been unable to find one that doesn’t disintegrate when used in enchiladas.  I was pleasantly surprised to find that all three of the La Tortilla Factory tortillas held their shape for this dish.  And while we both preferred the Smoky Chipotle Chile tortilla for this recipe, any one or more would work fine. 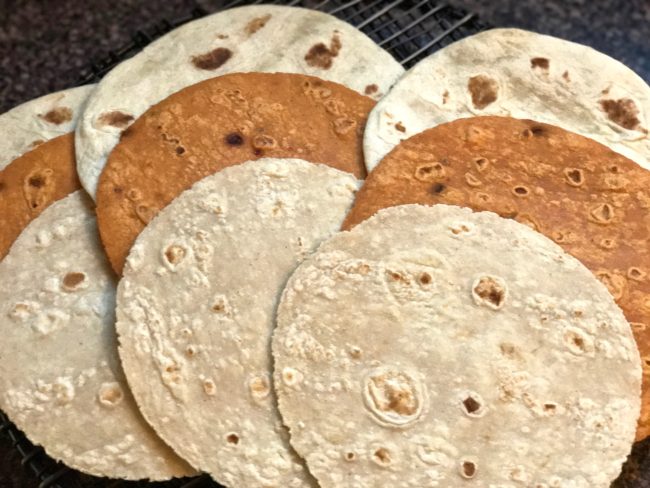 Before leaving for a San Diego State football game on Saturday … Go Aztecs! … 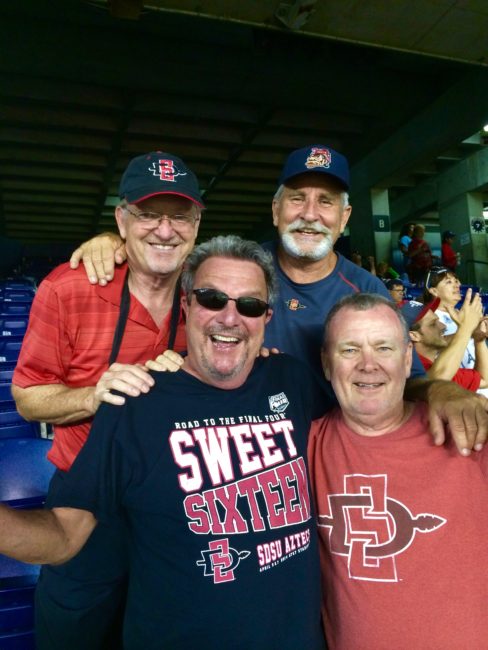 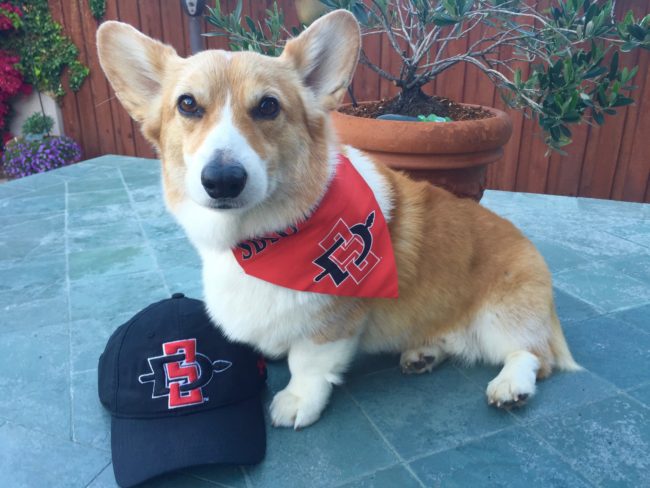 … Tom fired up the BBQ and grilled the Hatches for me.  Hatch chiles come in different heats, and these were the Extra Hot ones.  I put together this recipe Sunday afternoon.  As Tom was not there to grill the chicken breasts (he is in charge of the BBQ), I went old school and boiled the chicken and shredded it.  The only other change I made was to add five Hatches which was not too hot (well, at least for us) as the heat was tempered with the cream and sour cream.  Make your chicken first and while it is cooling, preheat the oven and start on the sauce.

Speaking of the sauce, I was a little skeptical as I am not a huge fan of green bell peppers and haven’t cooked all that much with tomatillos.  But I have to say, this sauce was stupendous, and I didn’t even need to season with salt or pepper.  We could just eat the sauce by itself.  Wow! 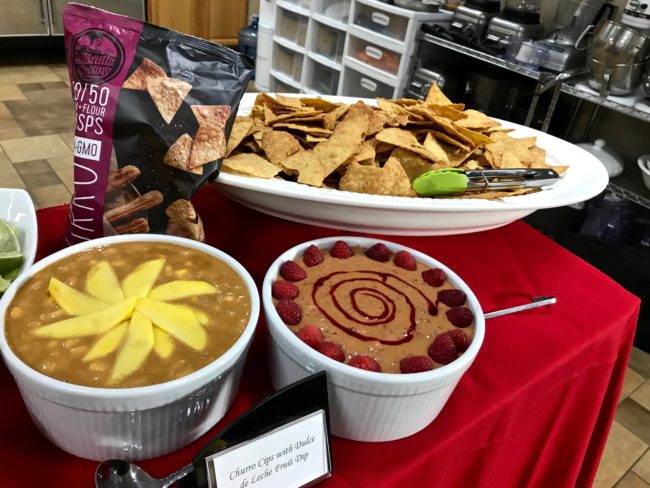 I diced up some strawberries and sprinkled crushed crisps over coffee ice cream … OMG, we need to go on a diet.

(By the way, if you prefer red sauce, check out our recipe for Chicken Enchiladas with Hatch Chile Sauce with dried red Hatch chiles…I love them both.) 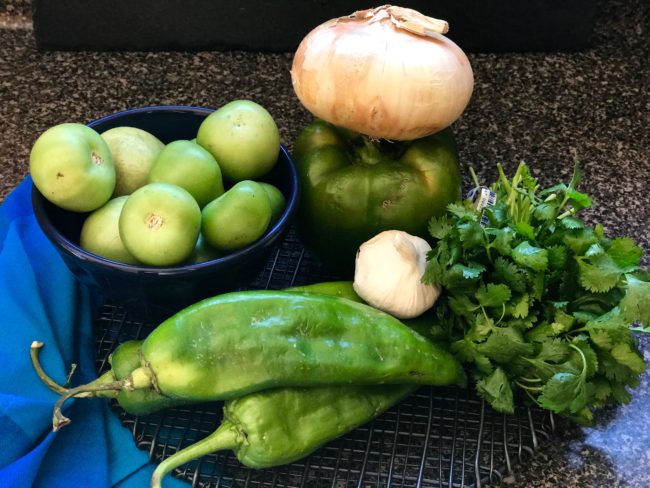 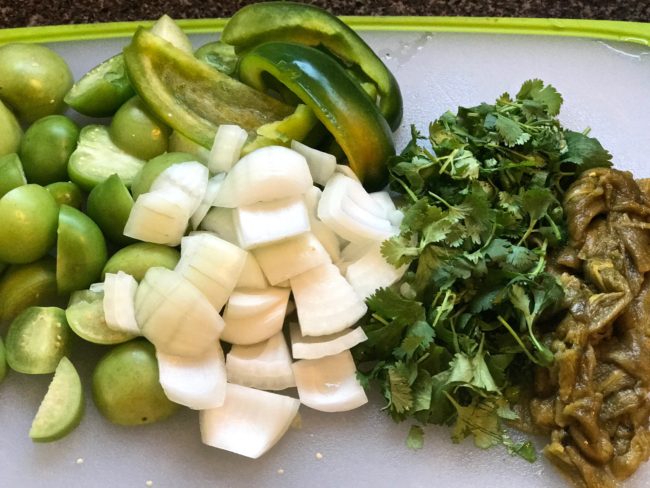 Combine all the ingredients in medium saucepan, fill with water to cover chicken (about 4 c. water).  Bring to a boil, cover with a lid and simmer until cooked, about 30 minutes.  Remove the chicken from the pan to a medium plate.  Reserve the liquid!  Use a fork to pull the chicken apart and let stand for about 10 minutes to cool.  Using a fork or your fingers, remove and discard the skin and ribs, and then shred the meat.  Return the shredded chicken to the reserved broth, so it doesn’t dry out.  Remove the chicken from the broth just before assembling.

As you will be pureeing the sauce, there is no need to dice the vegetables, just coarsely chop. 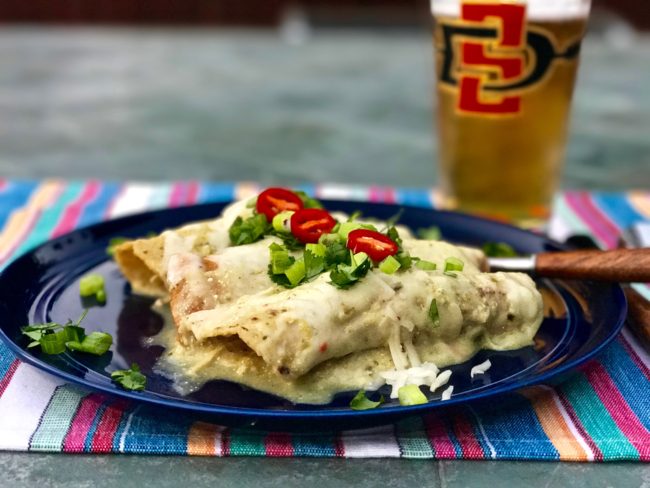 Heat the salad oil in a frying pan.  Quickly soak the tortillas on both sides to soften.  Drain on paper towels.  Fill the tortillas with chicken and roll up.  Place in a baking dish, seam side down.  Top with the sauce and shredded cheese.  Bake for 10 minutes or until heated through. 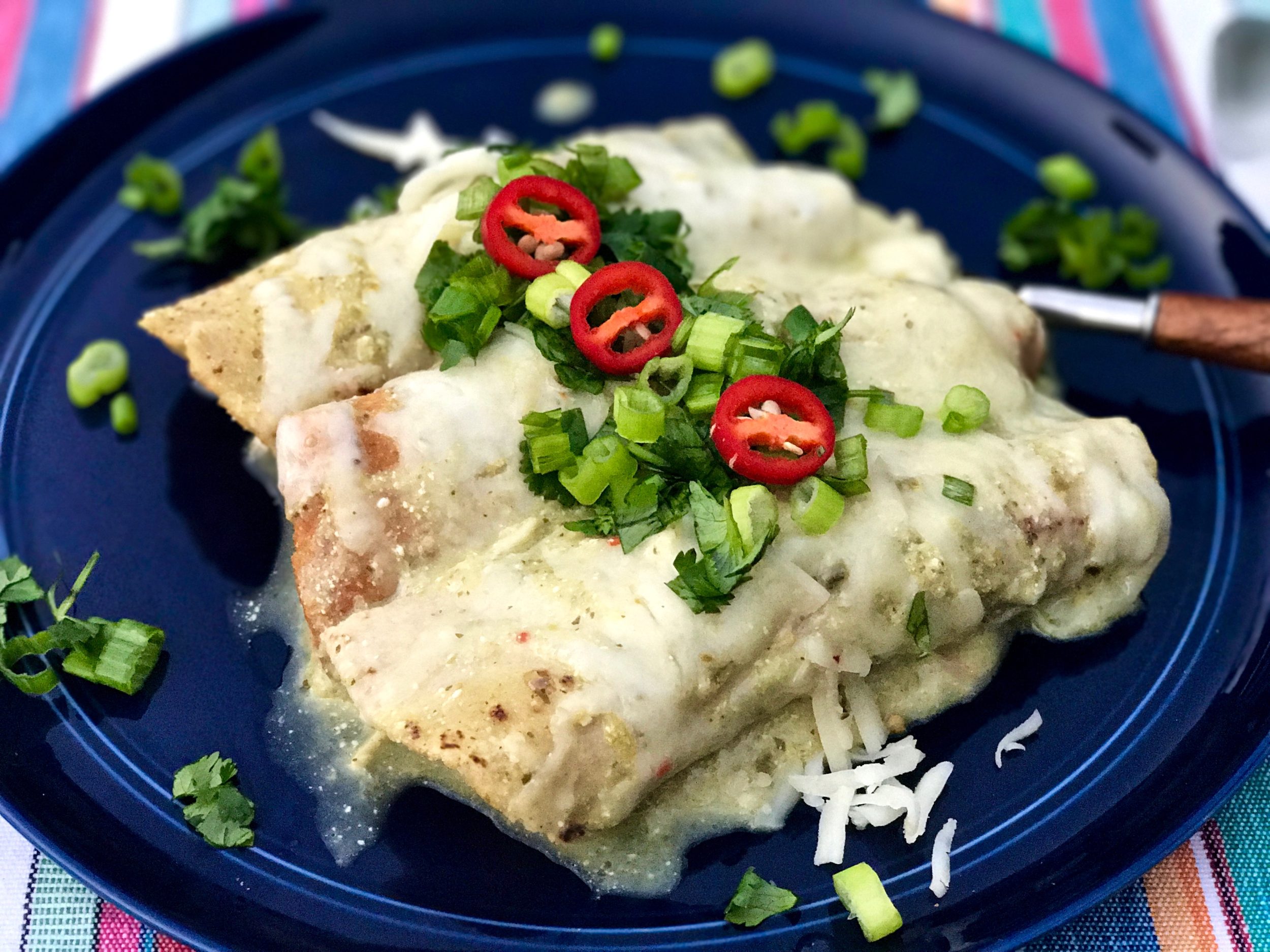