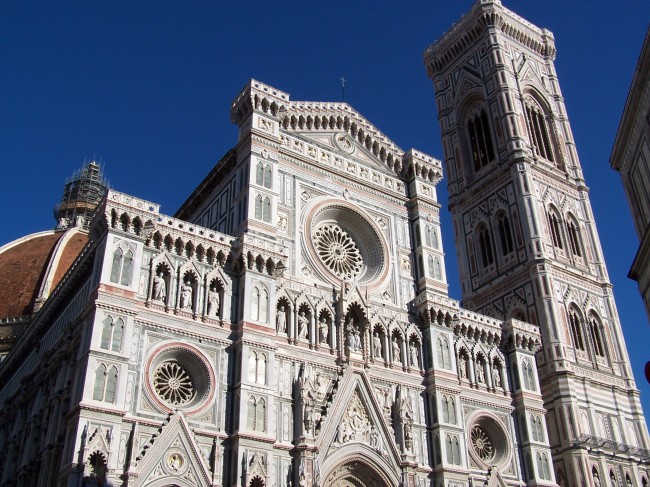 Chapter Thirteen – Greve & On To Florence

Day Fourteen – Meat Me In Greve, An Interesting Wine Break, Dangerous Drive Into Firenze, We Don’t Want The Irish And The Hostess From Hell

Break’s over!  We were on the road to Firenze, but not before a slight detour in Greve in Chianti. Greve is a cute little place located right on The Karen Valentine Highway. After parking, we made the fast excursion around the Piazza Matteotti, Greve’s main piazza. 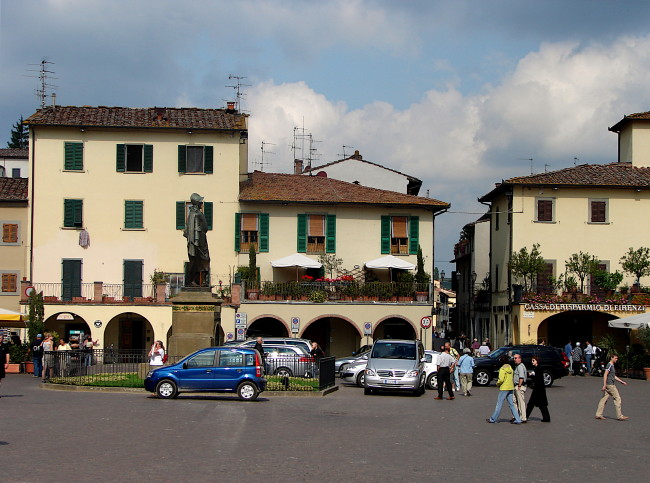 There is a statue on the piazza of Greve’s favorite son, Giovanni da Verrazzano, who in 1524 was the first European to sight New York Bay (even though Henry Hudson gets most of the credit). The Verrazzano-Narrows Bridge in Brooklyn is named for him.  He also discovered Cape Fear in North Carolina, however, showing his dark side, he kidnapped a small child on that trip, which did nothing to help his Karma.  Da Verrazzano met a rather ignominious end. While exploring Florida, the Bahamas and the Lesser Antilles, he was met by some unfriendly and hungry natives who were on a strict Atkins diet. They devoured the intrepid explorer.  Whether they enjoyed a nice Chianti and some Fava beans with there meal is not known. 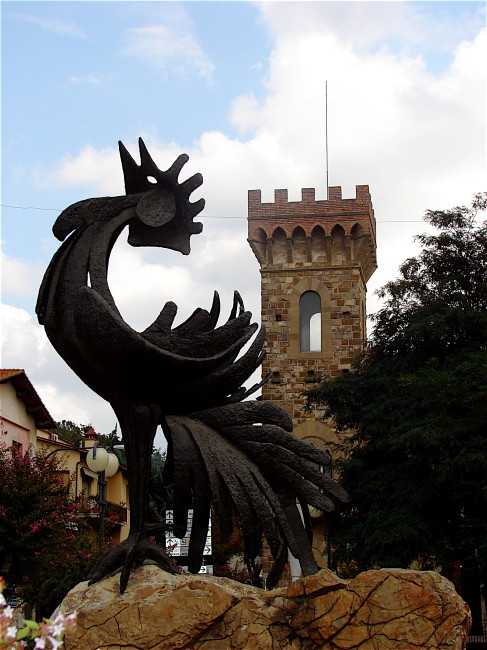 We passed by the famed wine rooster as we entered the tiny town of Greve, and I was in search of an Internet cafe because in my lethargy during the Il Mulino stay, I had inexplicably forgotten to email for directions to our next hotel, the Tourist House Ghiberti. This is tour director error number one, especially when driving into a city as complex to drive in as Florence. 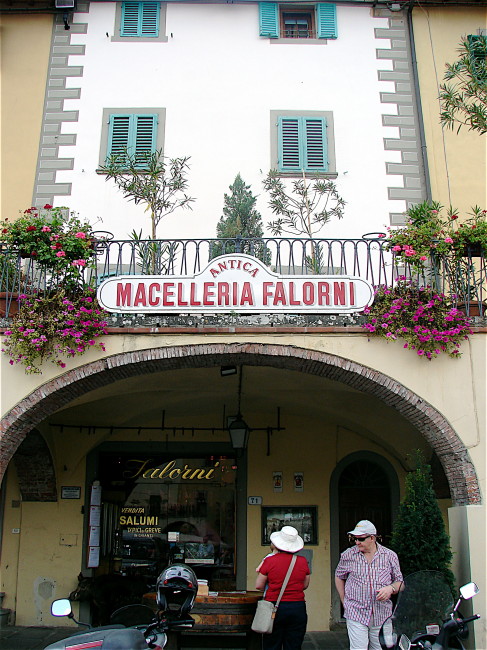 Unfortunately, the server was down at the only place in town where there was a computer I could use. What to do in this situation was easy; sample some wine. 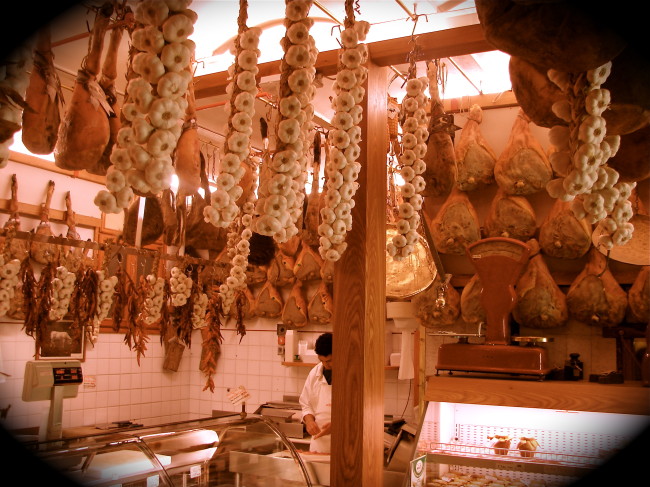 After looking at the assorted meats at the famed butcher shop Macelleria Falorni, which was founded in 1729 and is now run by the 8th generation of its descendants, we walked a couple of blocks to Le Cantine.  Le Cantine advertises that they are “the biggest wine store in the Chianti Classico region,” and who were we to argue the point? We just wanted some vino. 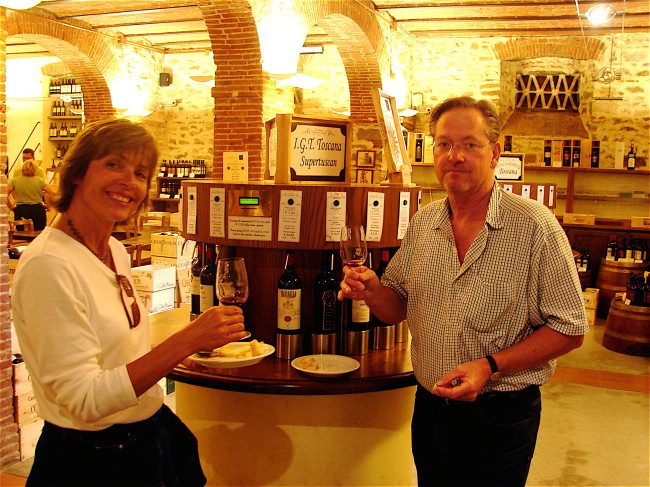 Money was paid at the counter, we were given a card, and it was off to the vino races, sampling Chianti, Brunello and even olive oil. We helped the local economy by purchasing some wine and headed for the deathtrap known as Firenze city streets.

On the road into Florence, Mary used the International cell phone to call Claudio at the hotel for directions. She was on the phone for a few minutes, scribbling at an incredible rate, so I knew this would be no walk in the park (although I might accidentally drive into a park).

Let the games begin. Knowing my past driving escapades of nearly killing dozens of Florentine citizens had all the passengers on top of their directional game. As we headed over the first bridge, we were all ready for our appointed jobs.

Tracy had her eyes peeled (ouch) looking for any street signs (never easy in Florence). Mary was relaying detailed information given by Claudio. Kim was telling us the streets we should be passing and when our appointed street should be near. Myself? Well, I had the easy job. I just had to drive. However, had we been killed or killed any pedestrians, I knew the fault would lie with me. 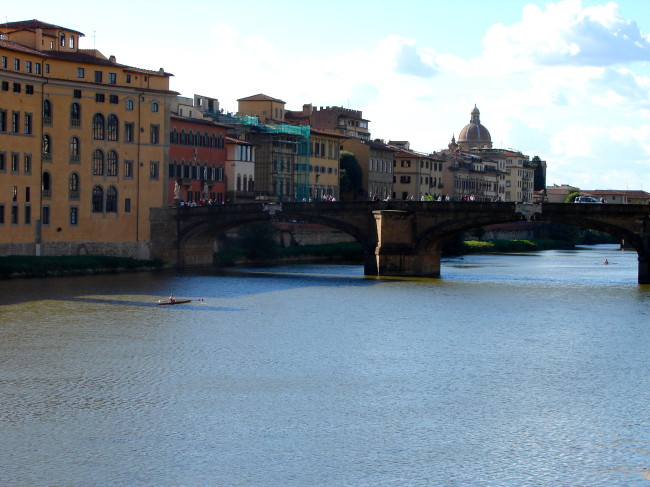 We amazingly made it to the street where the Tourist House Ghiberti (THG) is located and made a quick stop to ask a local whether we were near the hotel. She said “Avanti, about 100 yards ahead on your left,” and in about 100 yards, there it was.

Claudio greeted us after we had rung the bell and he helped us with our bags. We were safely at our hotel. One part of the Florence driving journey was complete without incident. We looked at our rooms (photo from website), which were spacious and had computers (by the way, to show how nice Kim and Mary were about the rooms, they let us pick at every hotel which room we wanted since I had made the reservations).

Now it was time for Claudio to give us directions to drive and drop off the rental car. Tracy gave me the rental car papers, and Kim went with me to drop off the car. I had driven about 75 yards when I remembered I had put the papers down on the bed and not retrieved them (another foreshadowing moment for you following along). Kim ran back and Tracy was waiting with the papers. When Kim got back to the car, he said, “Tracy just wants you to know that you’re an idiot.  Kim had this baby mapped out perfectly, and we made no wrong turns. Outside of nearly getting creamed by a huge bus, there were no major incidents.

The people at Europcar fortunately did not have our final bill (see Gubbio and Gas), so we could ride out the rest of the vacation in ignorant bliss of what that charge would eventually be in the end.

The Tourist House Ghiberti was a terrific find in Florence. It’s only a couple of blocks from the Duomo, and across from the Santa Maria Novella Hospital.  The double paned windows meant there was little or no street noise.

The bathrooms were spacious, and there was a nice breakfast that you could enjoy on the small outdoor patio in the morning (photo from website). The price is inexpensive for this quality in Florence. Four big thumbs up for THG! Let’s make it eight thumbs up! 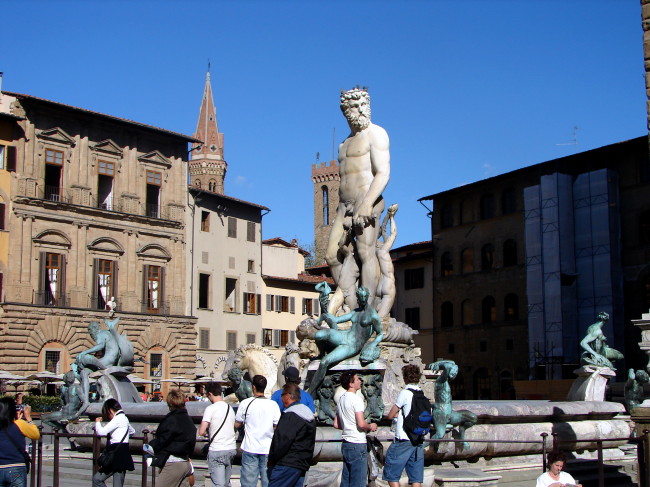 This was Tracy and my fourth trip to Florence and Kim and Mary’s second, so it was easy finding our way around. We had already seen the Uffizi (which I think is vastly overrated…sorry) and we did not have reservations to the Galleria dell’Accademia, which we had all been to before, also. 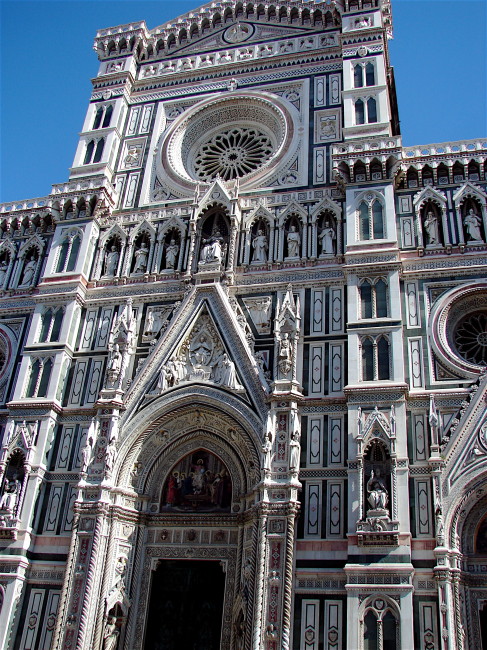 We were curious about seeing the recent restoration of the David, but the line was too long each time we stopped by, and nobody really wanted to wait. 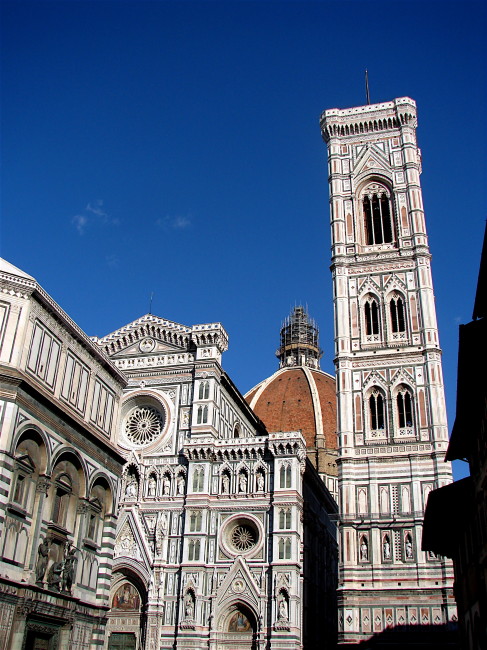 The four of us walked around Florence. It was a beautiful day, and being familiar with the city, it was nice to be able to navigate the town easily (no maps needed).  The Duomo and Giotto’s Tower popped against the bright, blue sky. 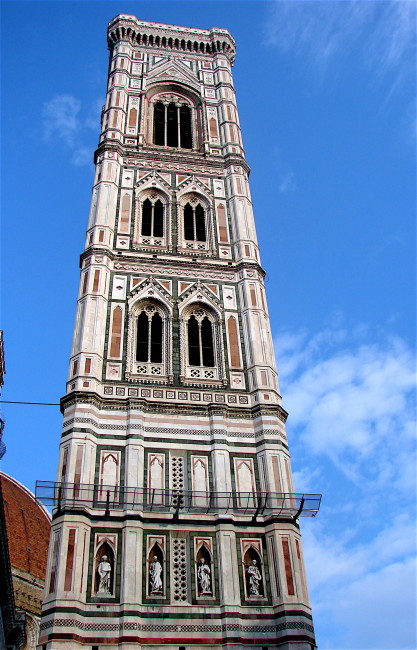 In the big crowd, once again on this trip I got momentarily separated from the gang, but they eventually found me. 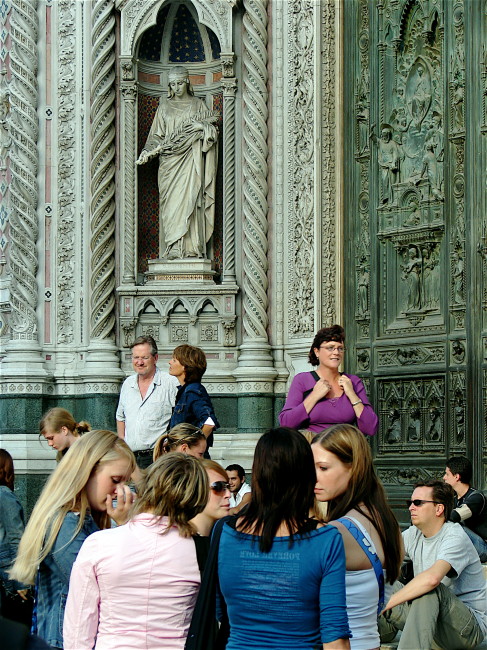 We also checked the crowd around one of the sets of Golden Doors at the Baptistery, and it was a big one. 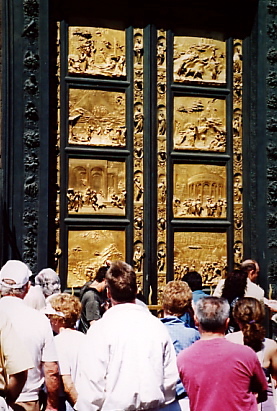 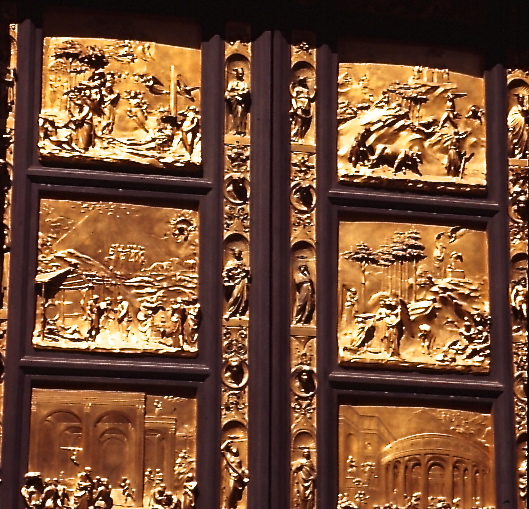 We kept on going.  After doing some window-shopping and buying some scarves, we bypassed a colorful gelato store. 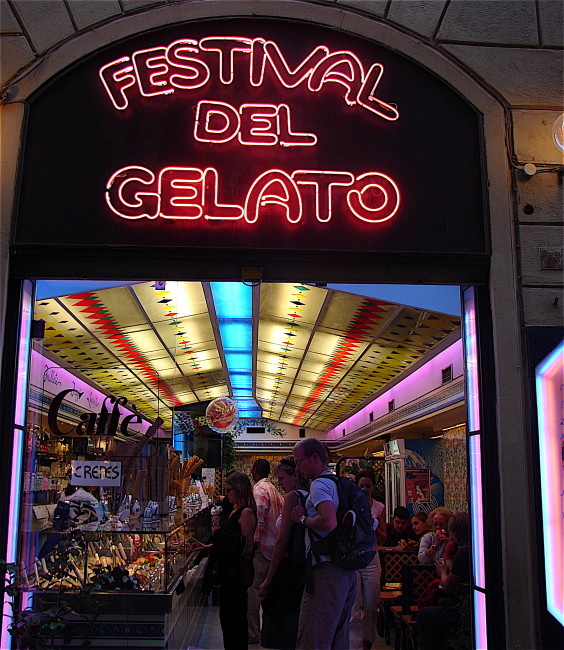 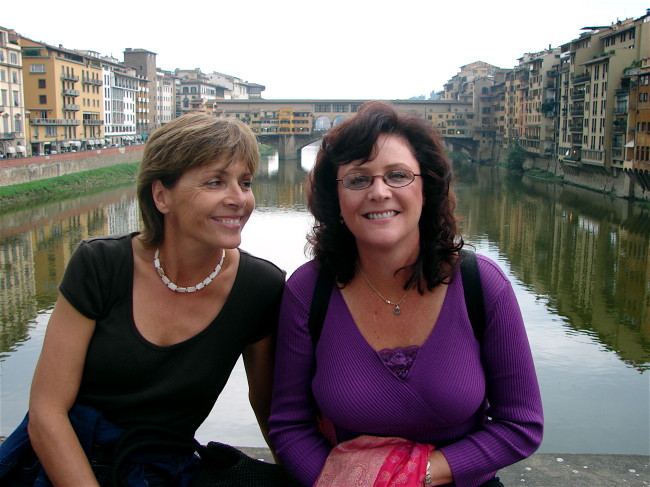 …and checked out the Bridge of Bling; the Ponte Veccchio. 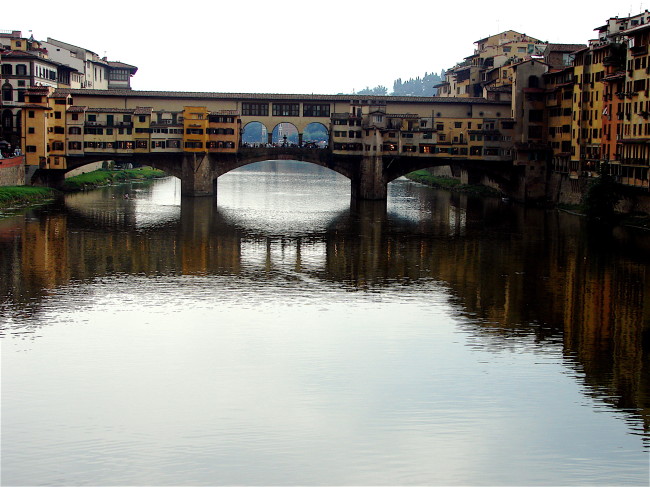 I had been given the recommendation of the Trattoria Zá Zá in the Piazza Mercato Centrale as a restaurant to try for dinner.  After convincing everyone that this was not run by a Gabor sister, we walked over to the piazza for dinner.  The place was crowded, and a hostess who was grumpier than Scooter Libby after he was served with papers, greeted us (well, greet might be a stretch).

If looks could kill, we’d be dead now. She said there were no tables outside and sat us down at an inside table, flung what must have been menus in our general direction and walked away to snarl at some new unsuspecting guests.  It only took us a few moments to realize that we need not patronize the Zá Zá, and we departed. I am sure our hostess missed us as much as we missed her.

We walked back toward our hotel and had dinner at Ristorante Sasso di Danté (photo below of restaurant is taken from another website). Fortunately, there was no inferno. We were not all that hungry anyway, and the dinner was relatively unspectacular. 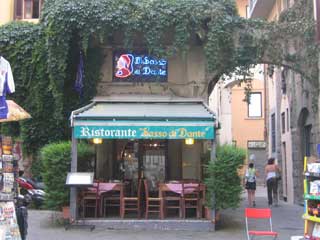 However, even this place did served a dish that would be enshrined in our Italian Food Hall of Fame. Kim enjoyed chicken in a yellow pepper, butter sauce that was incredibly tasty. I also enjoyed my gnocchi with blue cheese.

As we were ready to go to bed, Tracy started coughing like Mary and my other wife back at the Piccolo Oliveta, and we had reservations for a big-ticket item tomorrow about an hour away. Tracy didn’t have chicken for dinner, so I went to bed safe in my knowledge that at least she didn’t have The Bird Flu.

Next: Day Fifteen – Lean To The Left Lean To The Right, Are You Talking To Me, The Chicken Sandwich Shutout, People Falling To Their Deaths And A Boaring Dinner