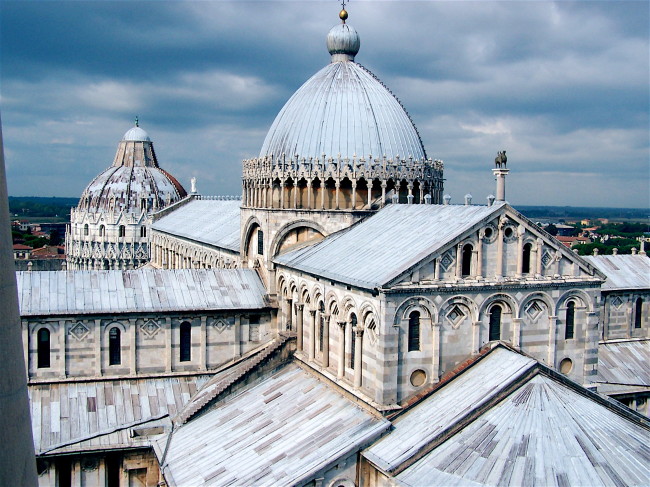 Day Fifteen – Lean To The Left Lean To The Right, Are You Talking To Me, The Chicken Sandwich Shutout, People Falling To Their Deaths And A Boaring Dinner

This was the morning that I had pre-reserved an 11:40 a.m. climbing of The Leaning Tower of Pisa. The plan was for the four of us to take the 8:27 train from Florence that got in to Pisa at 9:30. At 7 a.m., I realized that there were only going to be three of us, since Tracy had the Mary/Alexandra/Lamole waitress cough (though not nearly as bad). 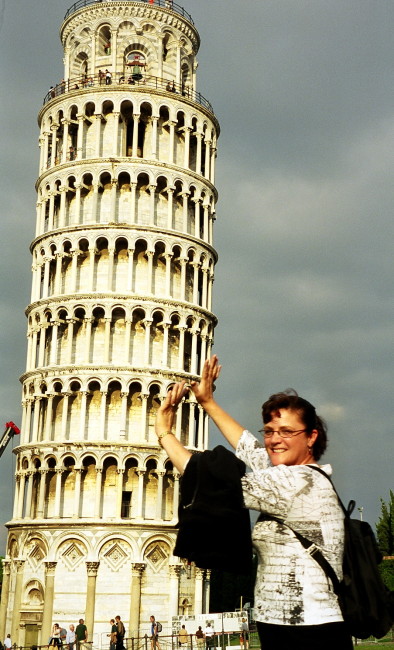 Tracy decided to relax for part of the day in an attempt to nip her illness in the bud, so she decided to stay behind. “I’ve been to Pisa (photo below was 2003) and can live without it.” Since there was still a week to go on the trip, she thought it would be a good idea, and, as it turned out, it was.

One of my idiosyncrasies (one of many) is that I am a freak about not being late. I tend to get to places too early, but I figure it’s better being too early than too late. Fortunately Kim and Mary know that about me, so they noticed that, as we were having a cappuccino at the THG, I was getting a little antsy about departing for the train station to get our tickets and make the train (although I think Kim likes me to sweat just a little bit for amusement).

Two years ago, Tracy and I had driven to Pisa, which is why I decided on the train for this trip. On that previous journey, Tracy and I drove through the maze of streets in Pisa following phantom signs to the Campo dei Miracoli. It was a miracoli we ever found it. I didn’t have a good impression of Pisa on that trip. 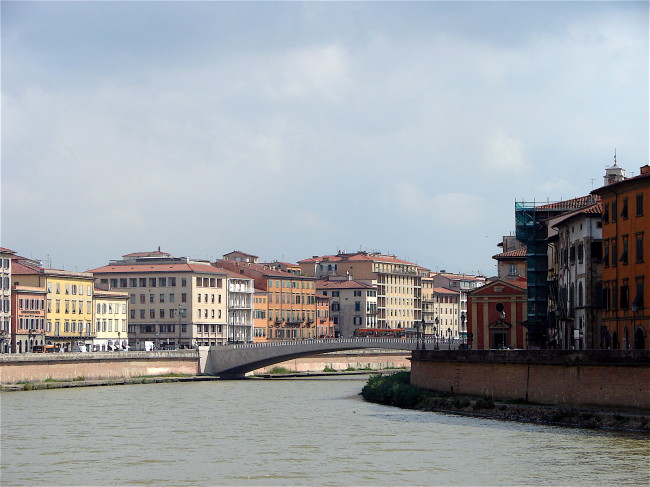 The train arrived at 9:30 and it was a simple 20-minute walk to the Campo dei Miracoli. When not trying to negotiate one-way streets and nearly maiming pedestrians, one gets a different perspective of a place, and my thoughts about Pisa are a little different now. Pisa wasn’t so bad after all.

The last time we walked into the Campo, all the booths selling Leaning Tower crap kind of cheapened the experience, so I warned Kim and Mary to just look at the Campo and imagine how beautiful this whole area was before tourism. We walked by a restaurant where a bird had deposited a load on a guy’s shirt on our trip in 2003 (ah, some memories just never leave you), and we were at the Campo.

I brought the printed proof of receipt to the ticket offices of Opera della Primaziale Pisa and they gave us our tickets, and we all bought the combo ticket for the Duomo and the Baptistery.  We visited the Baptistery first. 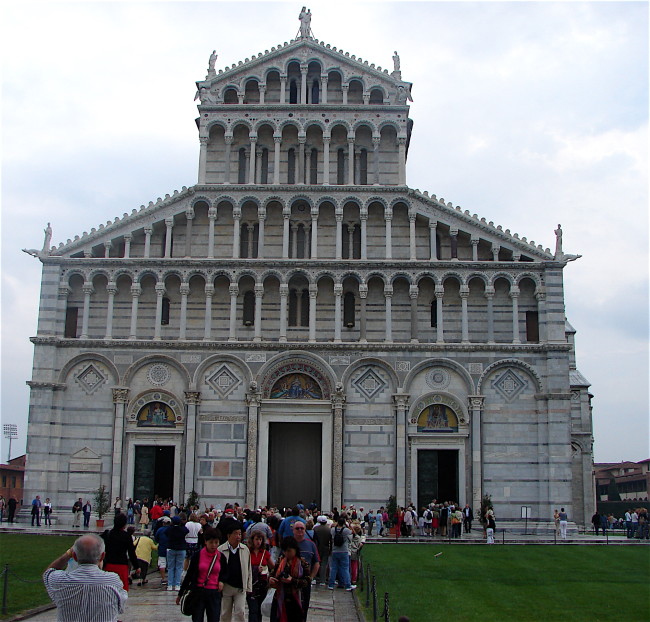 The interior has a neat Pisano pulpit and a large baptismal font. We were told that, if you count the statue on top of the Baptistery, the building is actually taller than the Leaning Tower.  Useless trivia, but good cocktail party fodder. 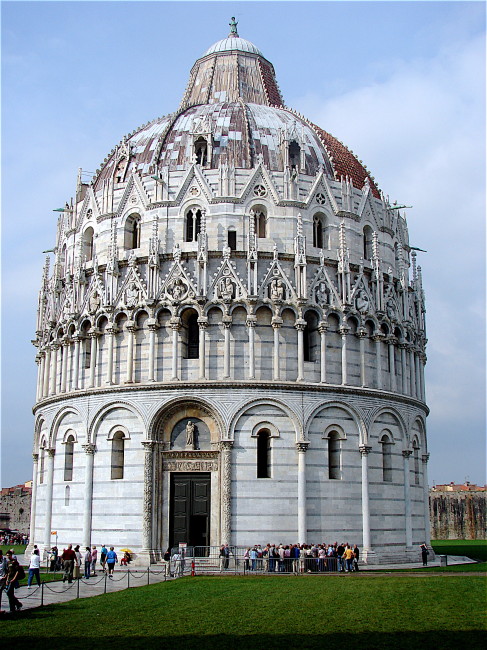 Then we visited the Duomo.  For some reason, we were obsessed with finding “Henry’s Tomb”, the tomb of Emperor Henry VII (whoever he was), which was one of the pieces that survived a 16th century fire that destroyed much of the Duomo’s art works.  Near a 14th century pulpit (which obviously survived the fire, too) is a bronze lamp that, according to legend, favorite Pisa son, Galileo, started staring upon one day at Mass (obviously bored by the length of the service). Just like me after a few bottles of Chianti, the lamp started to sway back and forth.  This is supposed to have given him the idea for the Pendulum. Since that event, some know-it-all Pisans have argued that since the lamp was cast in 1586, a few years after his discovery, this story was fiction. Being the romantics we are, we gave Galileo the benefit of the doubt. 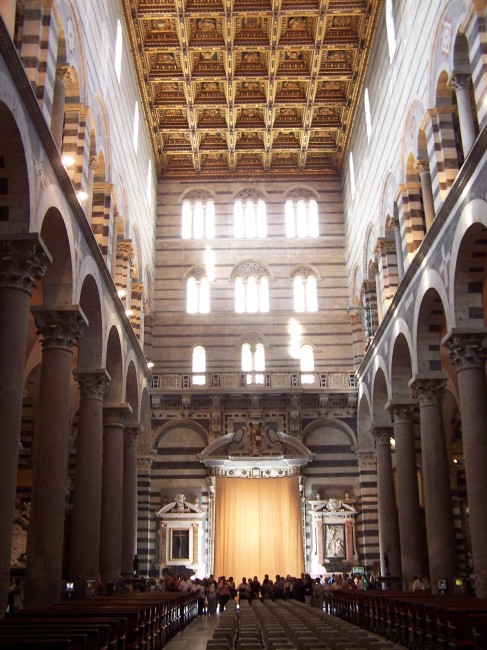 We were taken with the beautiful ceiling. 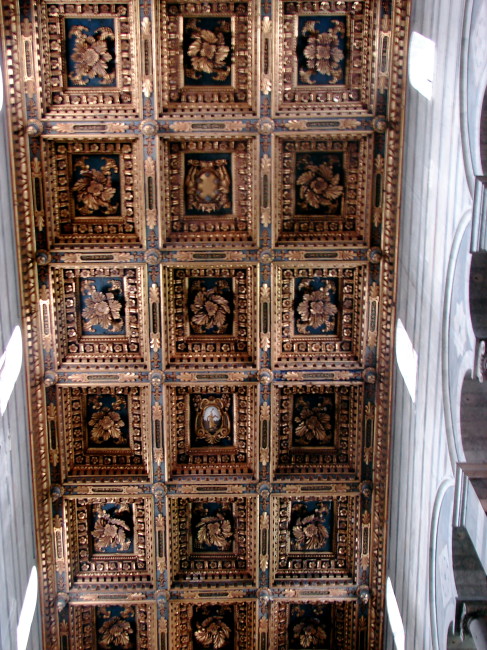 We still had some time before the big climb, so we decided more caffeine was in order and downed a cappuccino.  It was then time for the climb to the top of the Torre Pendante, and I had forgotten about Mary’s fear of heights. 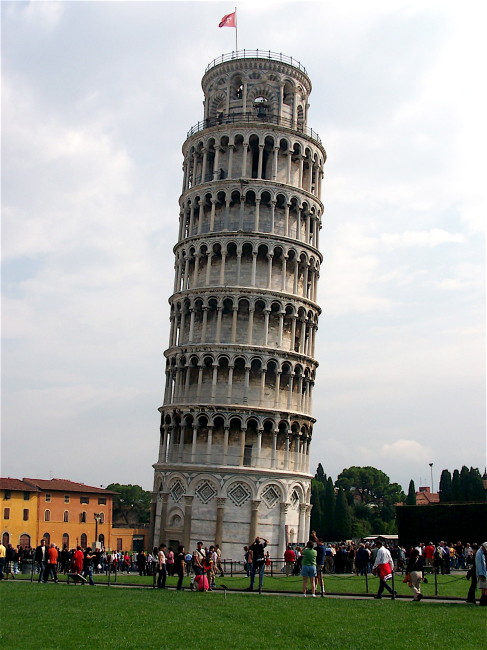 Mary, like myself, is more a Type A personality, meaning we tend to yap incessantly. Fortunately, our respective spouses are more the B variety and usually just shake their heads as we banter on. Today, Mary, feeling a little uncomfortable as we started the climb upward, began bantering … with herself.

I must admit, it was an odd feeling listing to one side or another as we walked around and around. I was right behind Kim, and we could hear Mary talking a blue streak, singing songs and just staying busy talking about nothing in particular. I said, “Kim, who is she talking to?” He was laughing when he said something like, “Oh, no one in particular.” Our spouses did a lot of laughing, although they were usually really laughing with us, weren’t they? In any event, we made it to the first landing with no problem.

We could see, where if slippery, a misstep could cause you to pull a Kim Novak in Vertigo and become a minced Pisa Pie. Fortunately, we safely made the top of the tower. 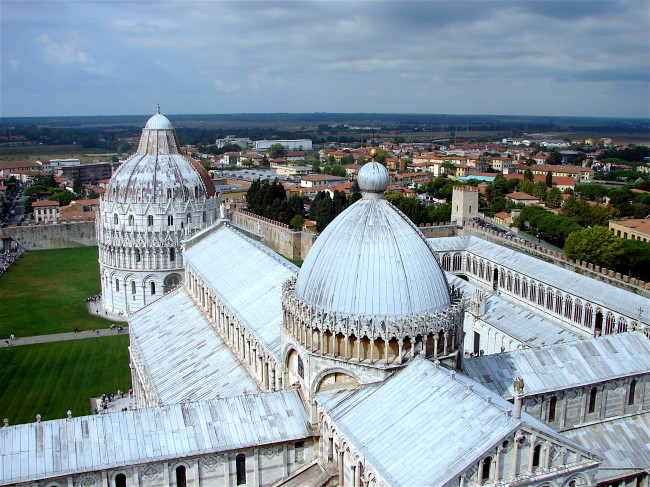 Mary was calm (sort of), and we took some fantastic pictures. It was cool to look across at the difference in height from one side to the other, but unfortunately that differential didn’t show up that great in the otherwise terrific photos we took. 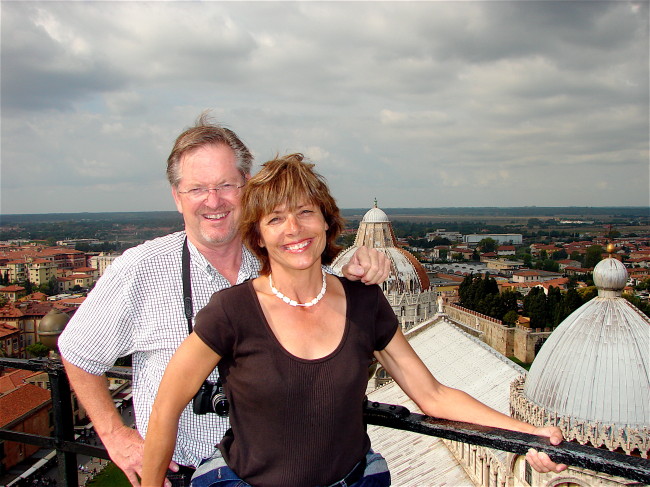 Just before noon, a voice came over the speakers saying in various languages that the bells are going to ring, it’s going to be real loud and don’t be so frightened that you fly off the tower. 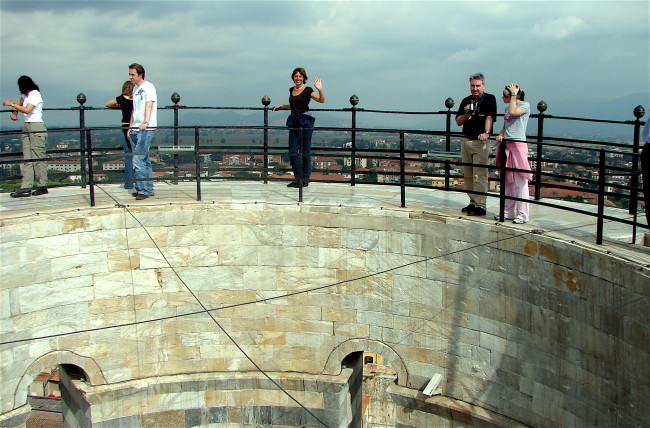 They were loud, and we are still here to tell about it.  The tour to the top and back is 1/2 an hour, and the groupings are limited to how many people can go up each trip. 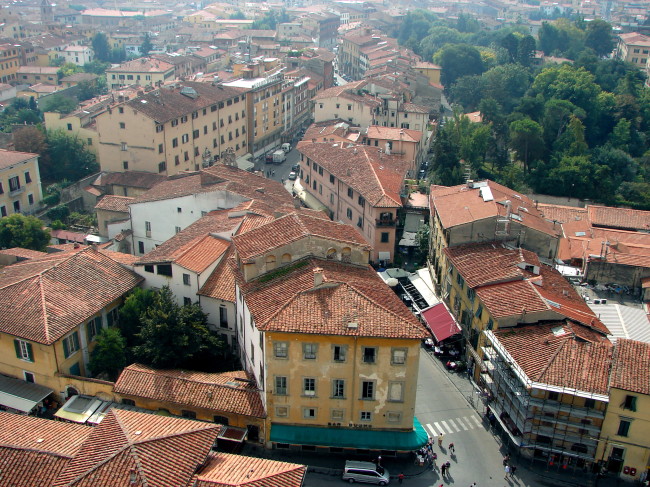 ALERT:  Read the signs before you go that say “no backpacks and purses.” They mean it. Mary had deposited her purse, but a couple of people with daypacks obviously did not think the signs were intended for them and did not heed the signs. They did not make our tour, and were not in the next group (probably full). 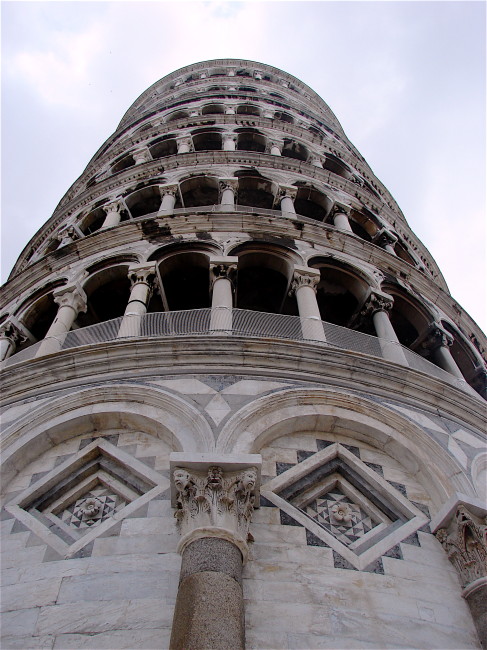 I don’t know if they ever made it up to the top, but the Tower people are strict about that detail. 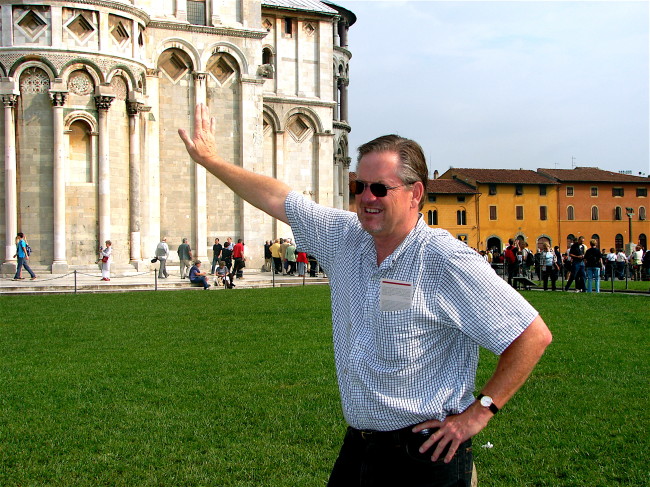 After Kim posed for a mocking photo of all those other Leaning Tower photos, we hustled back to the station for the 1 p.m. train (after a gelato stop) and were back in Florence a little after two, where I take this photo every time I am in Florence. My sister’s name is Deanna. 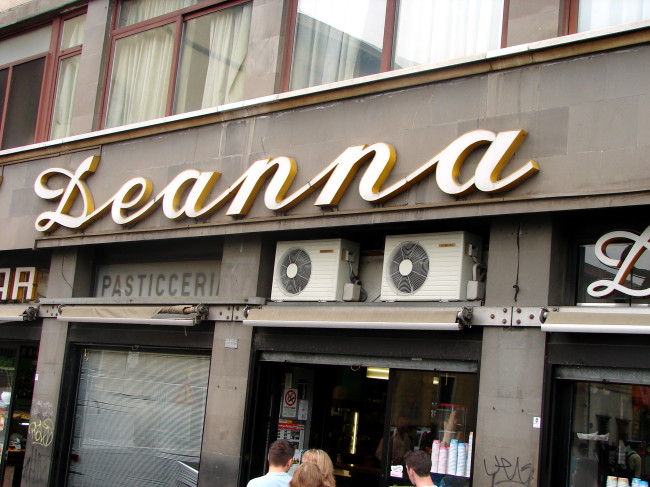 Kim and Mary went off on their own, but I was now in search of the greatest chicken sandwiches on the face of the earth at Caffe Giacosa, off the Via Tornabuoni.

This was Tracy and my fourth visit to Florence, and these morsels from heaven are the tastiest, freshest little sandwiches ever made. We have them every time we are here, and this seemed like a nice opportunity for me to do something nice for my wife. I thought, “Tracy will say I am the greatest, most considerate husband on earth (well, she could lie) when I bring these back for her.” 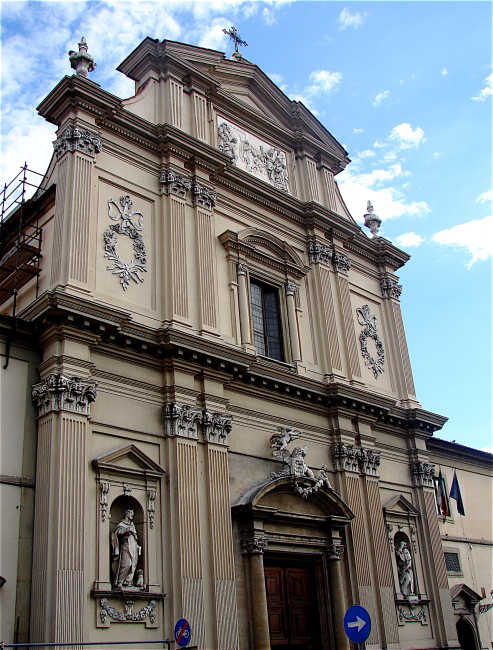 To my horror, they were sold out of chicken sandwiches. Panic set in, because we only had one day left in Florence and had dreamed about these sandwiches from the time we got to Italy (sure that’s weird, but damnit these are GOOD sandwiches!).

“We usually put them out at 11,” the woman said. I made a mental note that we should not forget to be here tomorrow morning at 11 a.m. Remember, however, I am the guy who put Super Gas in a Diesel.

Back at the hotel, Tracy was feeling better (even without sandwiches) and had even washed some of our clothes so we didn’t have to look like transients by the time we reached Venice.  That afternoon, the four of us went over to the Cappelle Medicee to see the tombs of the dead Medicis. When I visited this museum in 1996 with Tracy, there was some bizarre fashion show going on and the entire inside was full of Christian Dior junk (sorry fashion people, I’m more into dead bodies and stuff). I was looking forward to seeing the place uncluttered.

So, of course, when we get inside we see that the whole place is under scaffolding, and some of the statues have been removed for renovation.  It was still interesting, but not great. 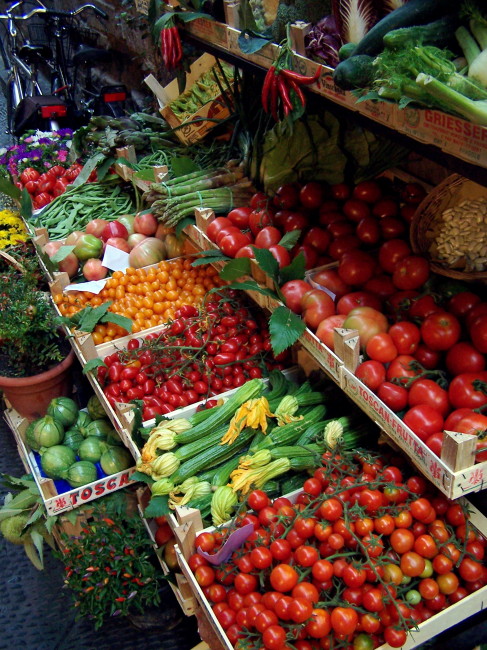 We walked across the Arno to the district of Oltrarno where we have purchased historical pieces of art before.  We ducked into a little store with produce, and luckily, we didn’t see anything we wanted, so after the four of us window-shopped, we looked at our watches and said (all together) “Cocktail Hour!”

I heard Kim laughing, and knowing that neither Mary nor I had not bantered for minutes (ok seconds), it could only be one other thing; he had found another Irish pub.

Yes, soon we found ourselves drinking Campari, Guiness, Jack Daniels and Scotch (not all in one drink fortunately), at Irish pub Numero Due. 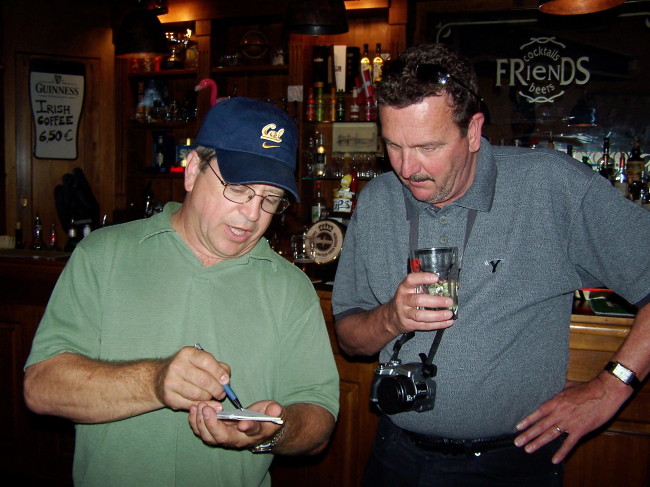 We met some guy who, after hearing we had gone to Pisa, said he was an engineer, and proceeded to tell us that a number of tourists actually fall to their deaths from the tower each year. We weren’t drunk, so we really did not believe his accounts, because I think hordes of tourists falling to death from a famed landmark would make the news. I did make an effort to look like I was enthralled with his findings, however.

Our second cocktail made the story no more plausible. We walked by the Osteria del Cinghiale Bianco and made reservations for dinner later on that evening. We then crossed the dangerous Ponte Vecchio. 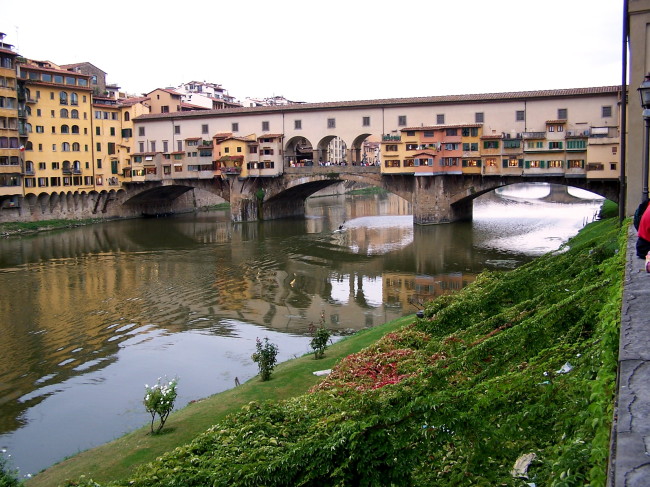 No, not dangerous for pickpockets, but for the plethora of bling-bling shimmering its blinding glare toward Tracy’s eyes (and fingers and ears). 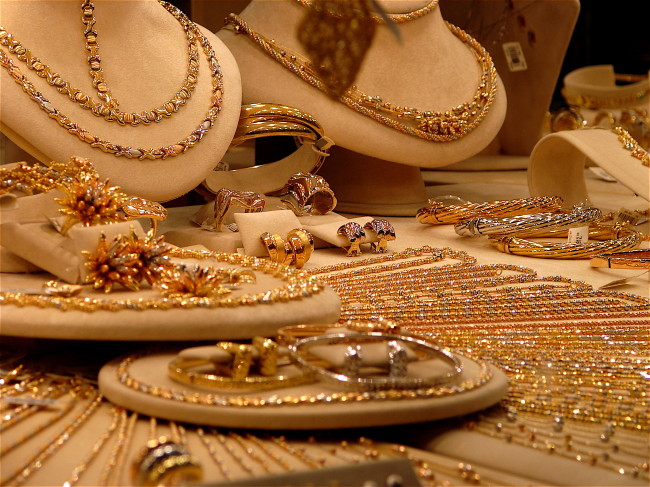 At this point, I was feeling the bridge experience would be cheaper for me if I was pick pocketed before she could find earrings, a necklace or ring that called her name. 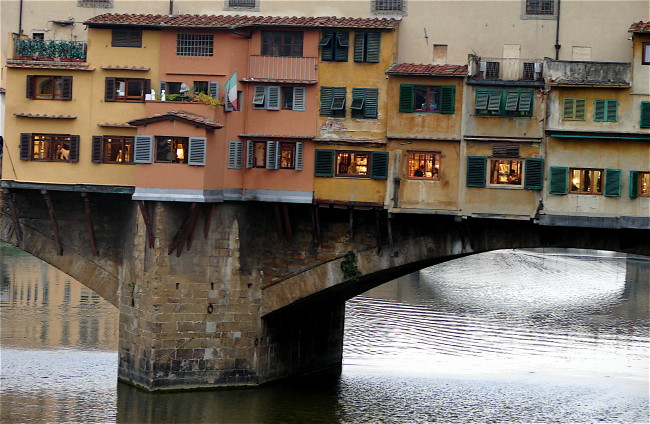 Fortunately, neither happened, which meant we could afford to spring the cats when he arrived home.

Later that evening, we walked back over to Osteria del Cinghiale Bianco (The White Boar) for dinner. The place was busy (photos from their website). I was the lucky recipient of the night’s best meal, a veal chop that was quite delicious! 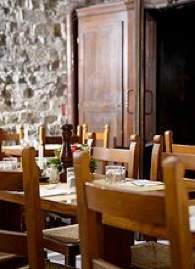 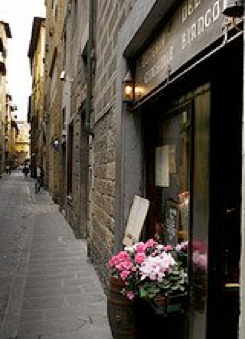 We had been fortunate enough to enjoy numerous delicious meals on this trip, and tomorrow we wold have one of the best we would encounter (and in hindsight, it had the best dish of the trip). It would also be our most fun dining experience.

Next: Day Sixteen – Galileo Gives Kim And Mary The Finger, A Museum Off The Beaten Path, Finding The Last Elusive Chicken Sandwich, Racing For The Sunset, A Fantastic Dinner And Introducing Dan And Linda Sharing Tragic (But Funny) Tales Of A Sunken Camera Plus The Most Expensive Fish In The World