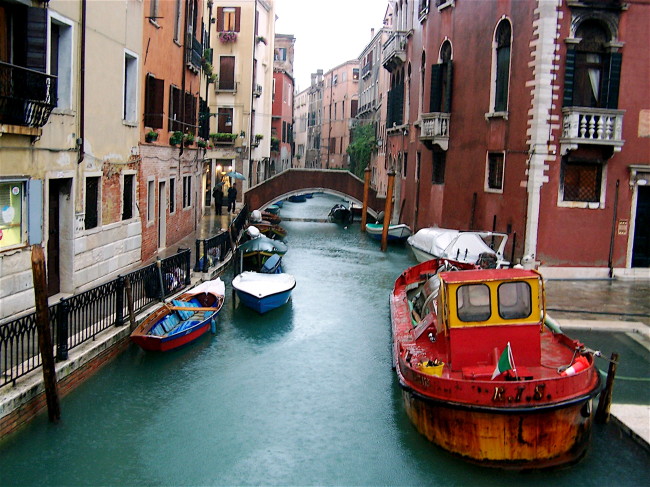 Day Eighteen – Palazzo Perfecto, Spectacular Scuola, The Canal Jesters, What’s That In My Espresso and A Singing Gondolier That Doesn’t Include A Gondola Or A Guy Singing

We woke up to a cloudy Sunday morning, and after breakfast at La Calcina (I usually eat breakfast five times a year at home…this was my 16th consecutive breakfast on this trip), Tracy and I hopped on the Vaporetto for the Ca Rezzonico, an old palazzo. 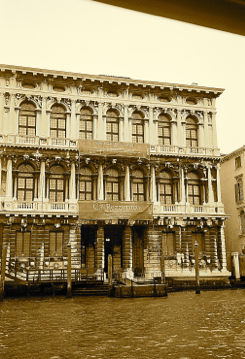 We had purchased a Vaporetto pass when we first arrived in Venice. 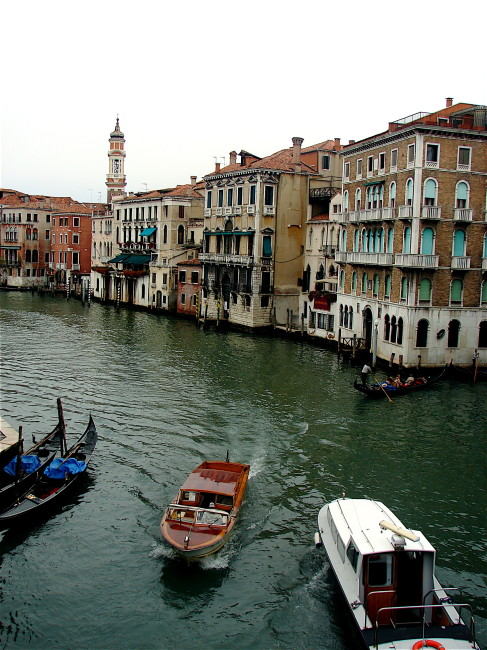 This  turned out to be a good deal, so we got on for the short trip. 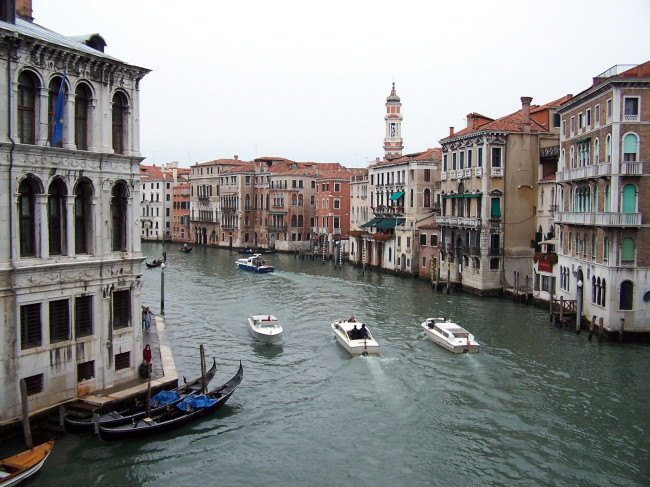 The cost for the Ca Rezzonico was 6 ½ euro plus 4 euro for the headphones, and it was a very insightful look at what Venice was like a couple of hundred years ago.   If you visit, the audio guide is a must, because it gives you a more detailed account, although Tracy thought it could have more information on the building itself, instead of just the art pieces inside.  All in all, we both thought it was a great stop, and I took a good picture out of an upstairs window that captured the essence of Venice. 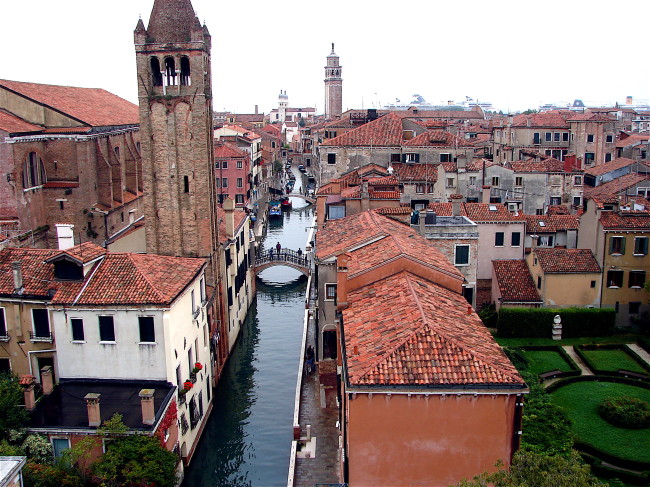 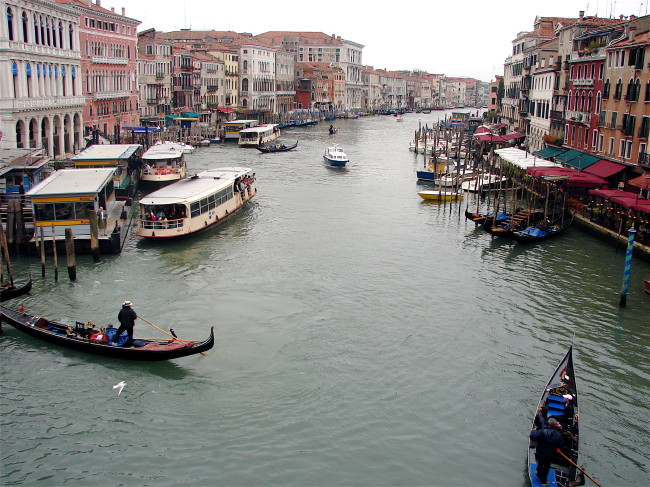 Tracy had told me that this museum was full of the works of the famed Tintoretto, who up until the day before, I had thought was the mouse that had appeared on the Ed Sullivan Show.  It was six euros to enter and the audio guides are free. The highlight to me, besides some incredible Tintoretto paintings, was the wood inlaid library (photo below from website). This quickly became one of my favorite places I had ever visited in Venice. 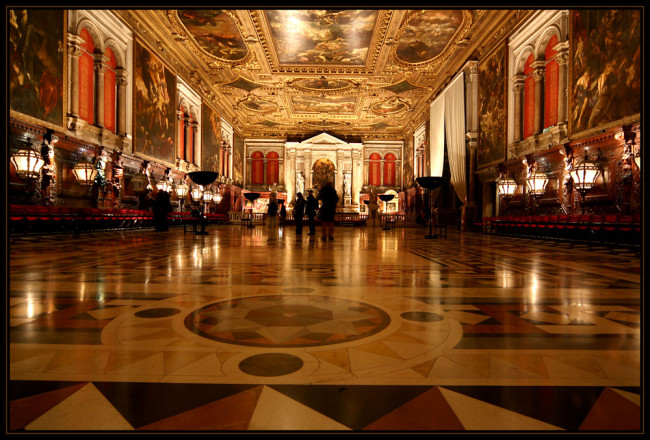 The upstairs contained a bunch of mirrors just lying around on benches, and I was thinking that they were for tourists to look at themselves and make sure pigeons hadn’t pooped on them.

Tracy informed me, that if you looked down at the mirror that lay it gave one a perfect view at the painted ceilings. Sure enough, the ceiling was spectacular from this angle, although I gave a quick glance to see that there was no poop on my shirt, since I had worn it yesterday at San Marco. 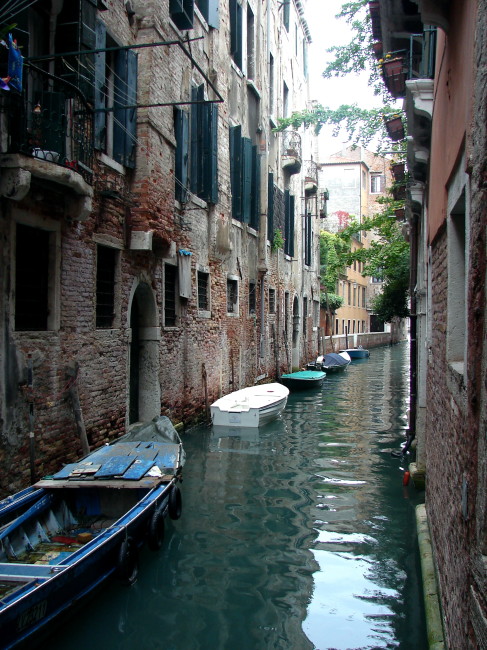 Our sightseeing continued at the Santa Maria Gloriosa dei Frari, the largest church in Venice outside of the Basilica di San Marco. It cost the others 2.50 euro, but I had bought a cumulative ticket for eight euro on the first day, so it was free (sort of) for me.

Walking in the rain in Venice is great, because its beauty transcends the weather, and it actually becomes a different city in inclement weather. The canals take on a life of their own.

So much sightseeing could only mean one thing, lunch.

We popped into a happening restaurant on a little alley, the Ristorante alla Madonna (Calle della Madonna San Polo 594), where you could dine like a virgin. The place was huge with four or five large rooms. We were seated in one of the smaller ones. The photo is off the internet, but we did sit at the table in the back corner. 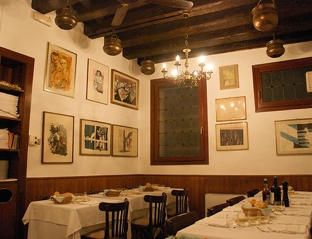 The bread was crusty, and come to think of it, so were the waiters (I’ll be here all night…try the veal), but the lunch was good. Dishes ranged from spaghetti and clams, ravioli pomodoro, scampi and a fish soup alla Venezia with crostini. I was forced to try the cream cake, which was delicious. 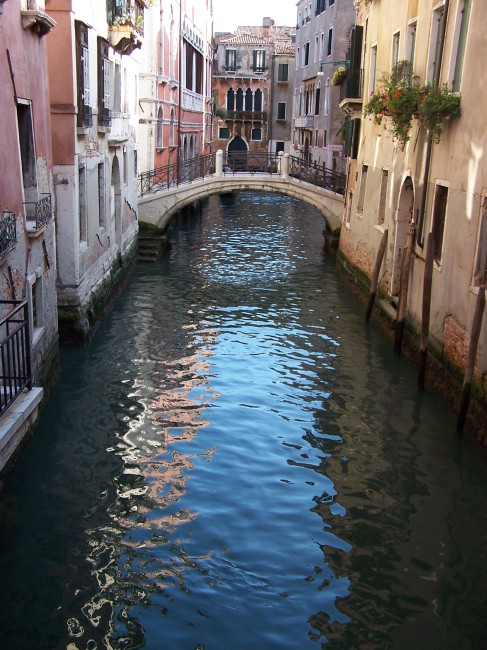 Up until this point in the trip, I had still not bought a really cheesy souvenir. That oversight would soon be rectified. On the way to the Rialto Bridge, there were a number of souvenir stands selling; well I’ll be blunt, crap. But that doesn’t mean we didn’t buy something. 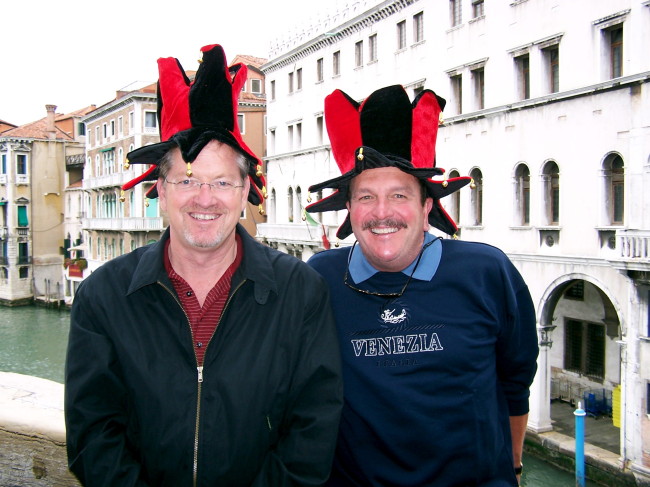 I had already bought a cheesy sweatshirt since I was cold, but we even did better than that. Kim and I both attended San Diego State (or as Kim jokingly calls it, the Harvard of the West). The school colors are red and black, and at one of the stands were red and black jester hats (bells and all). They were calling our name. 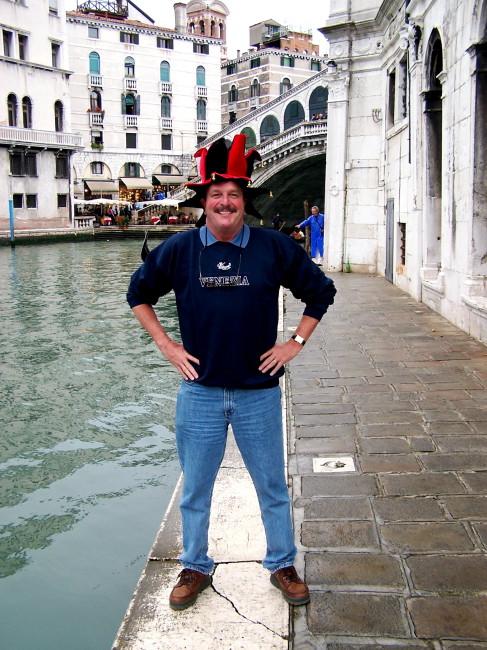 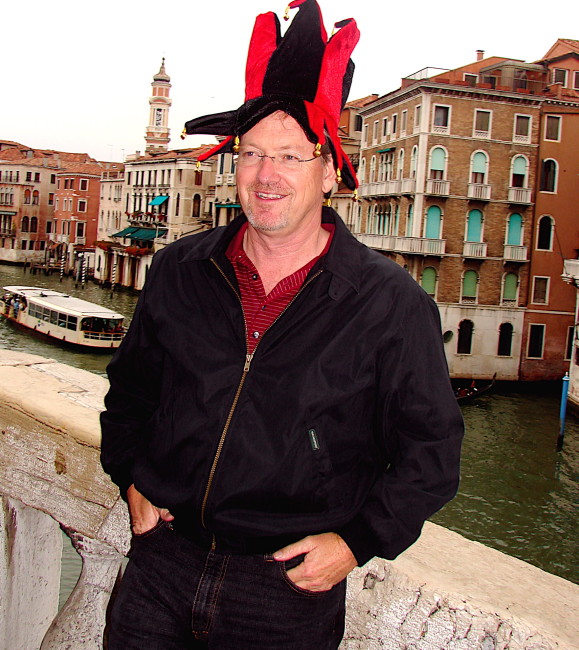 To Mary and Tracy’s ultimate dismay, Kim and I each bought one (five euros each) and took photographs of each other near the bridge in all of our sartorial splendor.  Now we really were two ugly Americans. 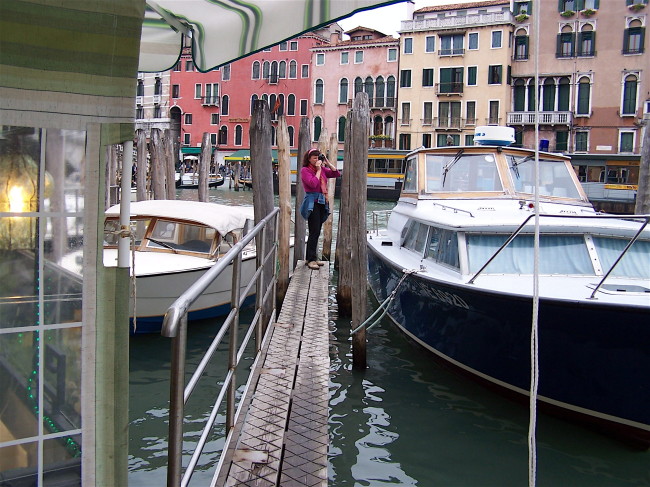 Tracy went off to take some photos and deny any knowledge of our existence. 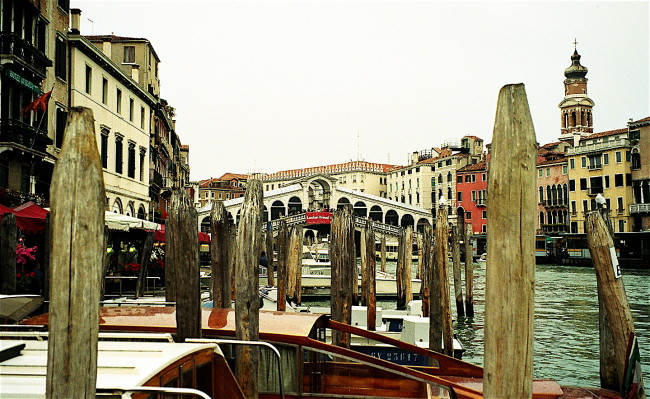 The rain was starting to come down, so Kim and Mary took the Vaporetto to points unknown (but they did a very cool photo of a restaurant in the rain), while Tracy and I walked the streets back toward our destination.  It also started Tracy’s 24-hours of shopping. 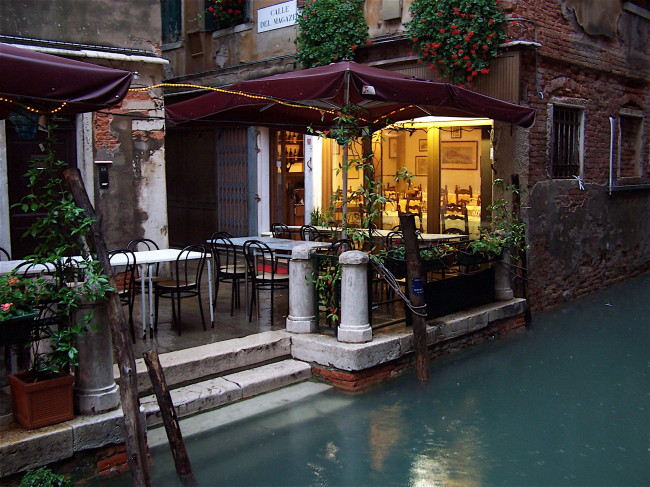 It all started innocently enough with some Murano glass necklaces.   While we were walking I spotted the Pasticceria Bar Rizzardini, and there in the window was a Mascarpone Cookie that said “Tom.” 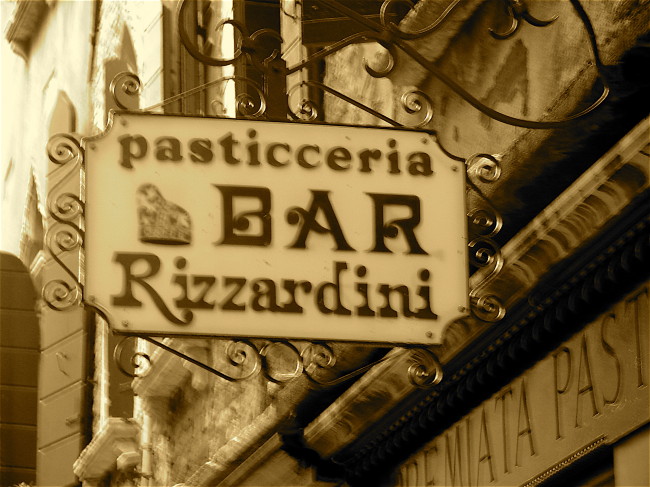 Once inside, I decided to have an espresso. “Grappa?” the gentleman behind the counter asked. “In my espresso?” I replied.  This was a new drink to me that I have since learned is called Café Correto, and the guy assured me that people actually drank it. As stated previously somewhere in this report (where, I know not), Grappa is a drink that hits with a powerful punch. However, I must admit, it was quite tasty, and I didn’t care if Tracy spent more money shopping after finishing it. Oh yeah, the cookie was good, too, what I remember of it. 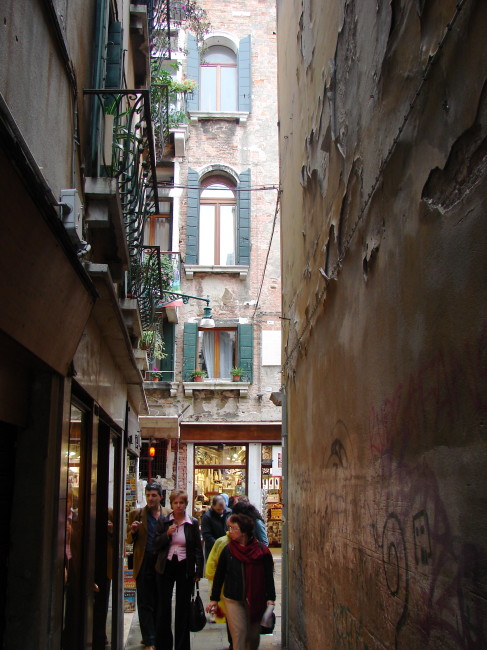 That evening, we all started to walk from the hotel to find somewhere to eat. It started raining pretty heavily, and the dinner at La Calcina was looking better to us. Tracy and I headed back to the hotel, but Kim and Mary were not that hungry, so they trudged on through the night.

We dined inside, and it turned out to be a good choice, although not great … EXCEPT, for yet another drink invention.

We sat next to two schoolteachers from Germany, who we met when they were given Tracy’s soup by mistake. They were a joy to talk with, and they kept apologizing for their poor English (which, by the way, was better than many San Diego State students I have met).

The timing of this dinner was shortly after the German elections, and we asked whether they liked Angela Merkel who looked like she would become the next Chancellor. They said, “No, but Schroder is just as bad. We actually can’t stand either of them.” Tracy and I told them we felt their election pain. 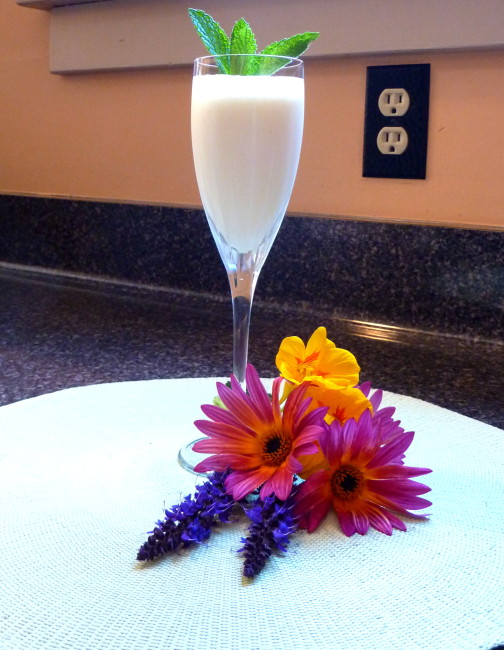 As we were chatting with our German comrades, I saw some Brits at the other table downing an after dinner drink with much gusto and in good spirits. Knowing that their politicians were as bad as the Americans and the Germans, I surmised it must be the cocktail that was putting them in such good spirits.

I said, “My good man (yeah, I’ve seen too many English movies), what might you be imbibing?”

“It’s a Sgroppino,” he replied, without a stiff upper lip.

A Sgroppino?!  My god, it sounded like a disease I could have contracted at San Diego State, but I asked the waiter what it was? He told us it was a concoction (not his own words) of lemon sorbet, Prosecco, a touch of Vodka and a little cream (like the drink on your left). He added that this drink was a great after-dinner drink to settle your stomach.

That clinched it. We decided to try one of the frothy delights. They were delicious. The German ladies asked if we liked it, and since Tracy had not broken the bank shopping, I ordered two for the Germans (ok, and one more for Tracy and myself).

We liked everything about the Sgroppino except one thing, the name. What could we call this Venetian drink when we serve these at home? After a few seconds of contemplation, Tracy took the first two letters of the drink and said, “Let’s call them ‘Singing Gondoliers’!”

I thought to myself, “Damn, I married well.” 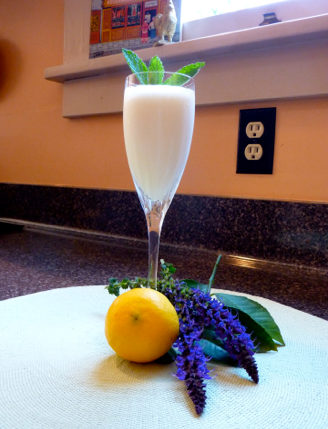 I can’t put just two tablespoons of vodka in anything, but you don’t want the vodka to overpower the drink. I used four tablespoons and one more tablespoon of cream (if not you are not a vodka person, it is not mandatory to put vodka in). You really shouldn’t taste the vodka anyway (I just like knowing it is there). Melt the lemon sorbet until soft, and put ingredients in a blender. Blend until it becomes somewhat liquidy (I don’t think that’s a word, but who cares). Then comes the maitaitom method to make it frothy. As it blends, open the little top of the blender and add the white of one egg as it continues to blend. Blend a little longer. Pour immediately after blending or the mixture will separate. It is a perfect after dinner, stomach-soothing drink.

Next: Day Nineteen – Men Of Accademia, The Tiny Ship Was Tossed, Singing In The Rain, the Cat Puppet and Whose Pen Leaked On The Spaghetti?