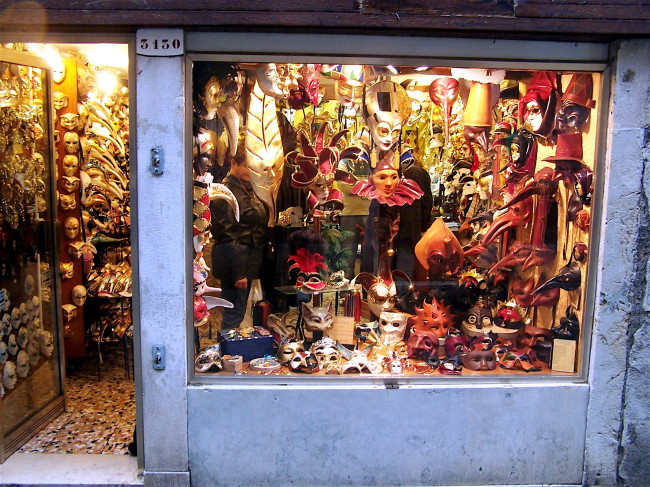 Day Nineteen – Men Of Accademia, The Tiny Ship Was Tossed, Singing In The Rain, the Cat Puppet and Whose Pen Leaked On The Spaghetti?

Through the years, Kim and I have had many a “Boys night out;” sporting events, bars, gambling and clubs that provide, ahem, adult entertainment. However, we had never had a “Boys morning out.” Today was going to be that day.  But instead of clubbing, we were going to a museum. Yes, we are now officially old. 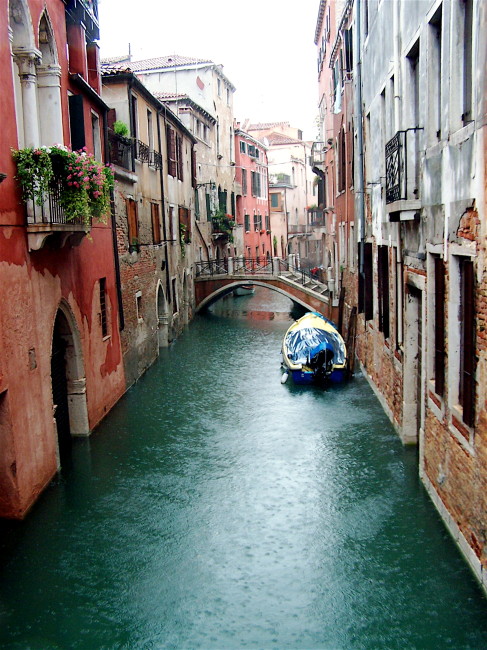 The previous afternoon we had spotted a long line at Galleria dell’ Accademia, which we had wanted to see. “I wonder if there is a long line at the opening?” I pondered.  Kim said he would give it a try if I wanted to get up early.

The “waking up early” thing seemed like a much better idea the previous day when I awoke a little after seven. The combination of Campari, vino and Singing Gondoliers were still dancing in my head when I rang Kim’s room. “Let’s go for it,” he said.

I forget if it opened at 8 or 8:15 a.m., but Kim and I were a few minutes early, nonetheless. There was one guy in line, so we ducked in a nearby cafe for a cappuccino, and were back in line for the opening. 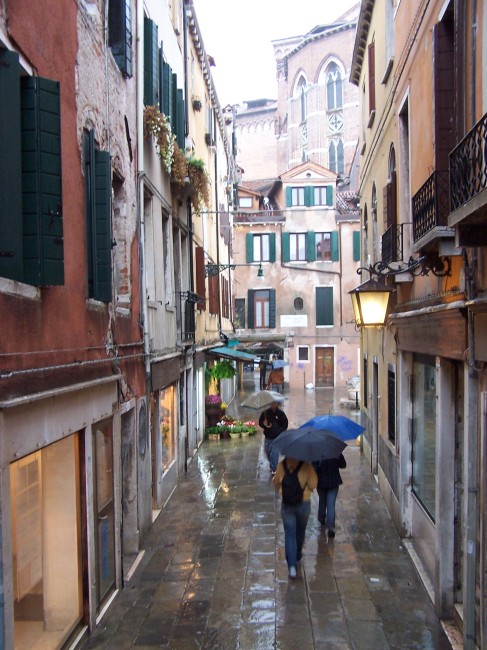 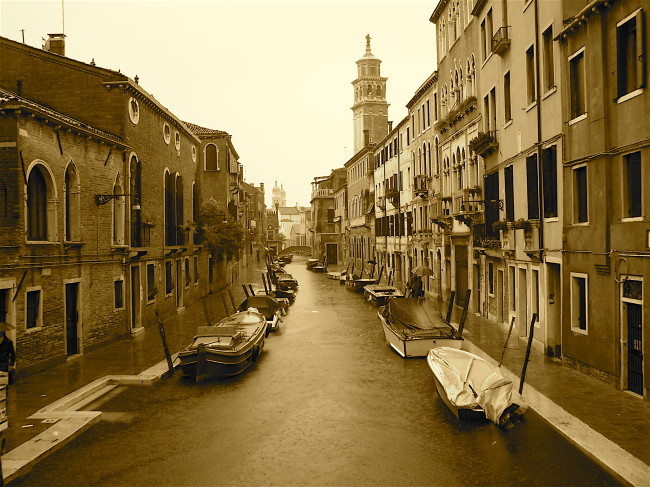 The Accademia was well worth the visit, and the audio guide covers the big-ticket paintings. It took us a little less than 90 minutes to go through the museum. Kim had taken a liking to the paintings of Bellini, but all I could think of when I saw his name was a peach drink, and that didn’t sound too good at 9 a.m. 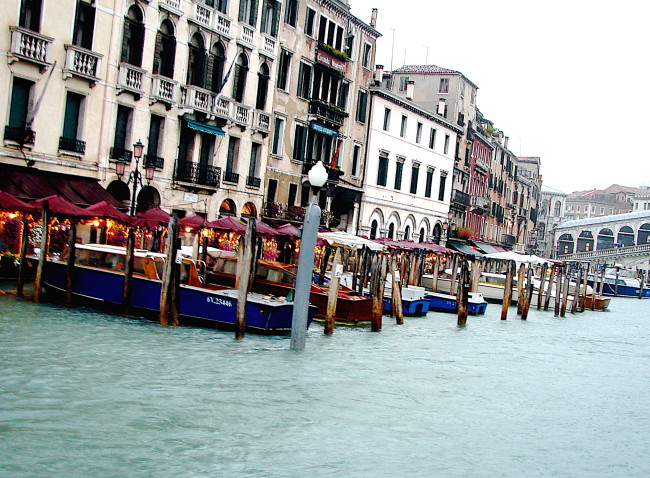 We were done by 9:30, meaning that if we hustled we could still catch breakfast at La Calcina, and you know we couldn’t miss breakfast.  Tracy and Mary were already seated when we rushed in for cappuccino and a sweet roll. 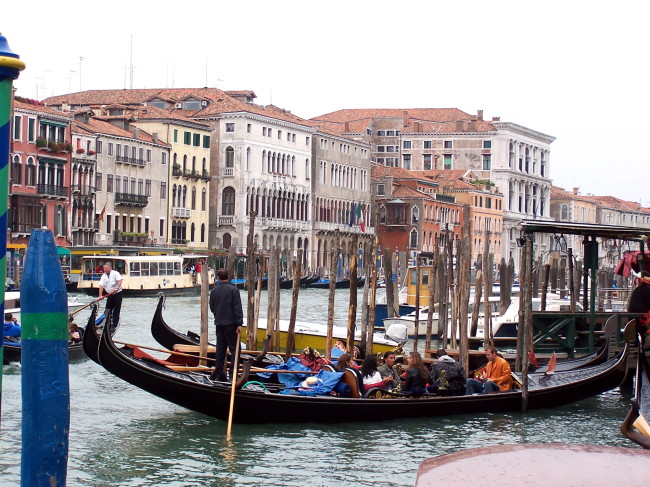 There was a plan to take the little-more-than-an-hour trip to Burano, the lace island.  As we stepped outside, the skies opened and it began pouring. 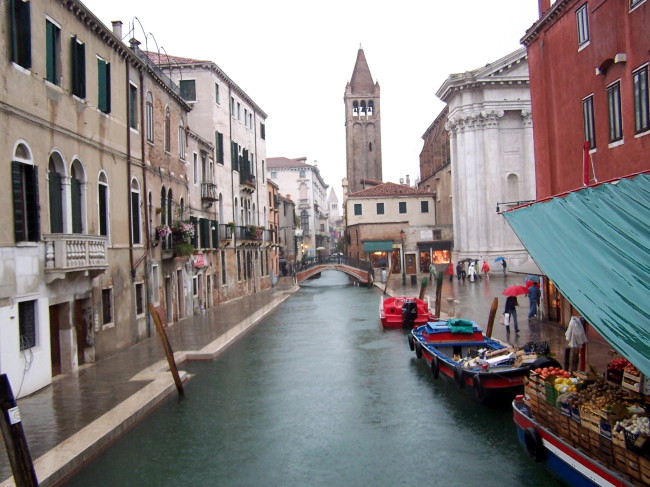 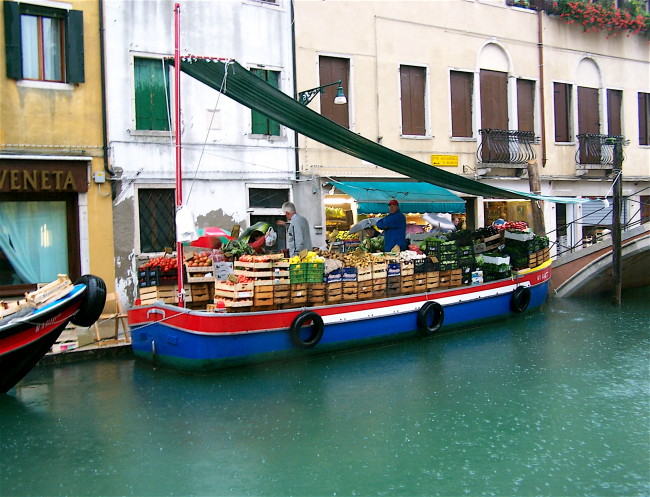 Luckily, the hotel has spares for their guests who over-imbibe and give away their worldly possessions.  We sloshed down to the Vaporetto stop, as water came up on the walkway. Yes, the weather started getting rough. 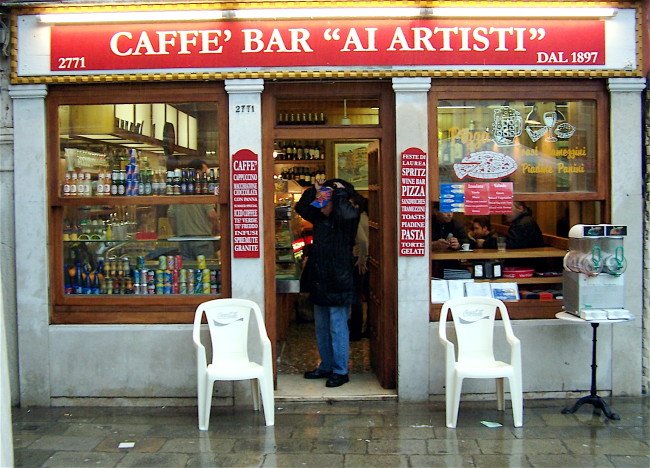 A few years ago, on a trip to Catalina, Mary and Kim found out that strong seas and their stomachs’ don’t mesh very well.  As we stood on the platform waiting for the Vaporetto, I looked at Mary’s face.  It looked whiter than one of those Venetian masks, and I had a feeling Burano was not in the cards for our friends.  I think if we had gone on the Vaporetto, more than the tiny ship would have been tossed. 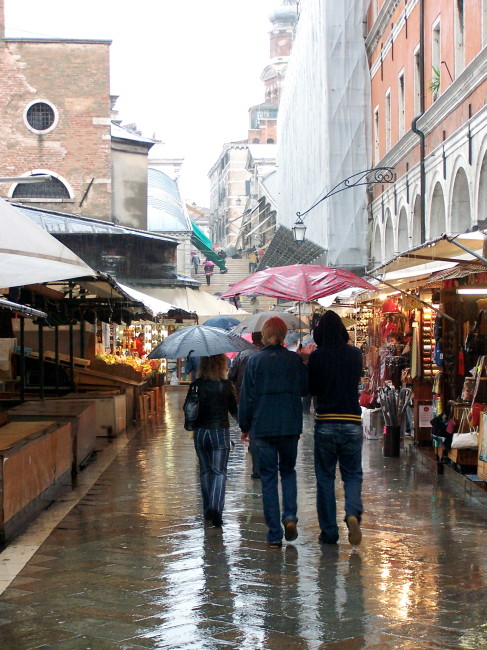 So much for the fearless crew of the Minnow and our three-hour tour of Burano.  For me, the rougher, the better (boat rides, of course).  However, it did seem kind of dumb to take a one hour-plus boat ride when all you could see was a driving rain, so Burano will have to wait for another visit. 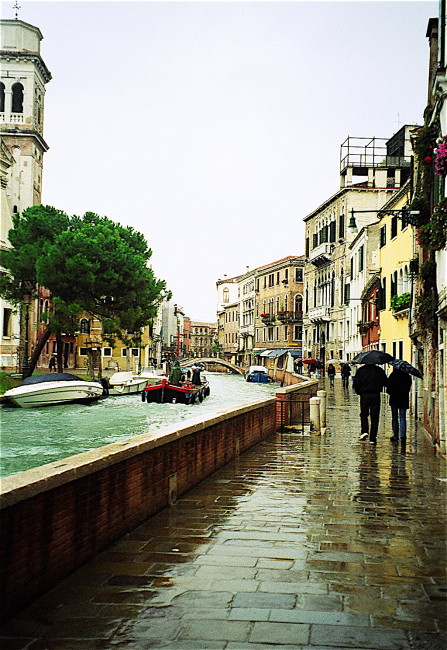 The Professor and Ginger then headed for Piazza San Marco, while yours truly, Gilligan, and Mary Ann decided to go back to San Polo. 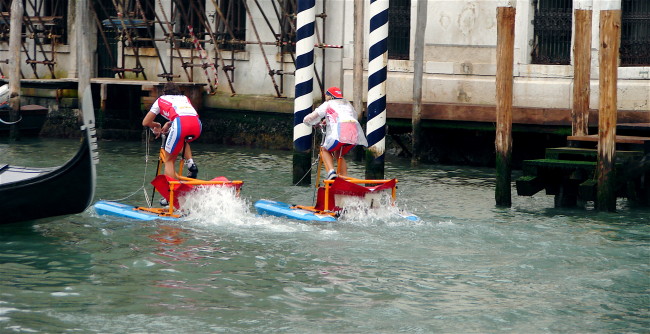 It is a fact; Venice is a blast in the rain.  We even saw a couple of guys on water bicycles enjoying the pouring rain. 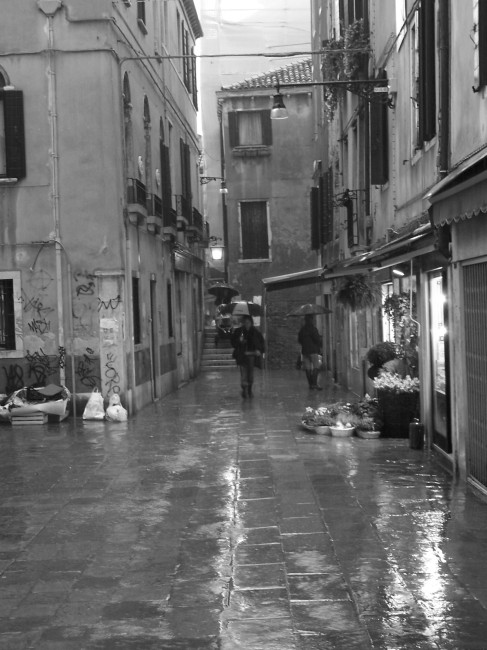 As we headed on the Vaporetto toward the Rialto Bridge, we noticed that the Ca Rezzonico that we had visited the day before was now impossible to get into thanks to high water. 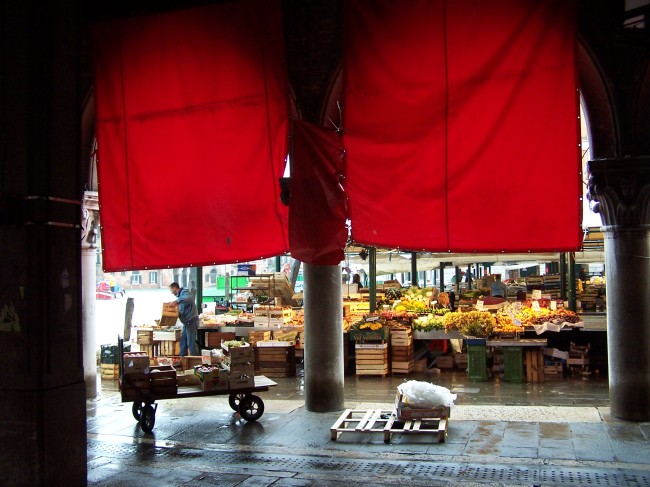 We window-shopped for a while, but hunger once again set in (hey, I only had one sweet roll for breakfast). 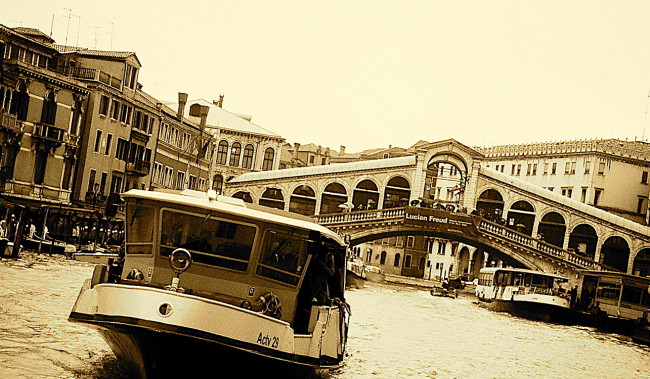 I had read about a place called Cantina do Mori, which has been a bacari since the mid 1400s, so Tracy and I decided we’d eat there.

It’s rumored that Casanova hung out here, but I do not know if he ever said, “This vino rosso is better than sex.” We were the only Americans who occupied the place along with a bunch of Italians and a few Germans. This is one of those places where you eat cicchetti, which is basically a bunch of finger food that you have to eat a lot of to get full. But it was really good finger food. 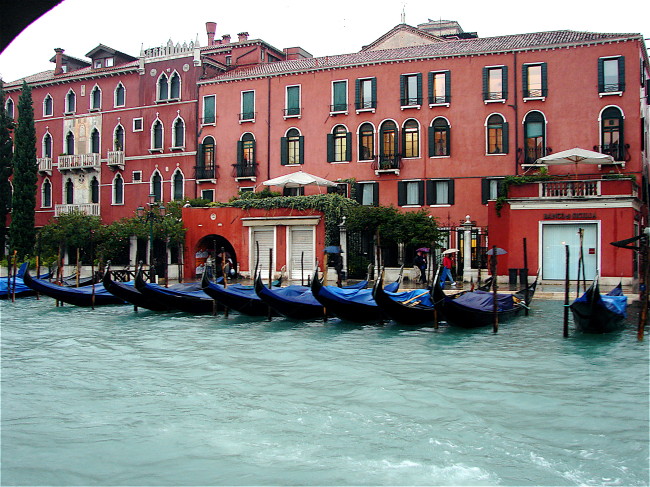 We devoured some bruschetta pomodero, a wedge (or two) of Pecorino, deep-fried, breaded eggplant, smoked salmon crostini, a crab claw (not a pretty sight), a potato/dried tomato skewer, crostini with zucchini and shrimp, along with salt cod mashed with olio and pepper on a crostini. 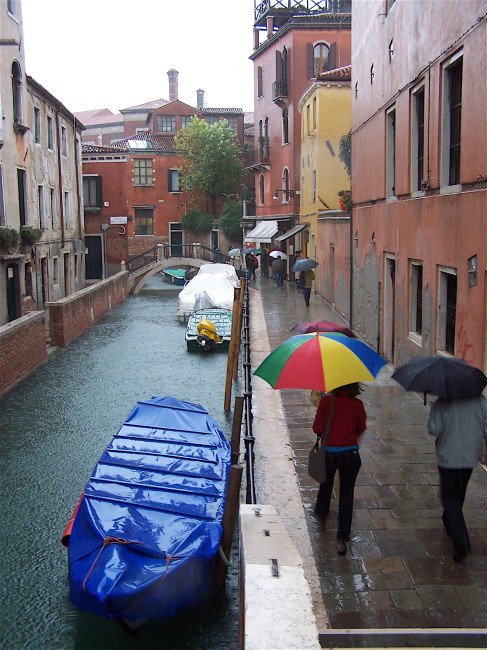 Each of us had a glass of prosecco and a glass of vino rosso. There were no seats, so we occupied a position at the back bar.

Interestingly, all the Italians paid when they bought each item, while for us, they just kept serving us different things as we ordered, which was often. I told you we were hungry! I guess I had an honest face.

Finally, we were ready to pay the bill, and I had no idea how much this going to be, but I thought it would be a lot because, as you can see by the above description, we didn’t skimp on drinks or food. Amazingly, the entire bill was only 26 Euros, which I felt was a bargain.

The atmosphere of this tiny place was also terrific. One of the guys behind the counter was going to be married soon, and the locals who came in kept buying him glasses of wine and giving him grief (as a once-future husband, you can tell what they’re talking about, no matter what the language).

We started the soggy walk back toward Dorsoduro.  Tracy bought some jewelry for friends, and then we stopped to look at a window of a cool, little shop (similar to the one on the right) that had a beautiful (I can’t believe what I am about to write) cat puppet.  I can’t even blame it on the vino, because it looked so similar to our little orange tabby, that we immediately decided we had to buy it.  Ok, maybe it was the vino.  Thankfully, we still liked it when we unpacked it upon returning home. 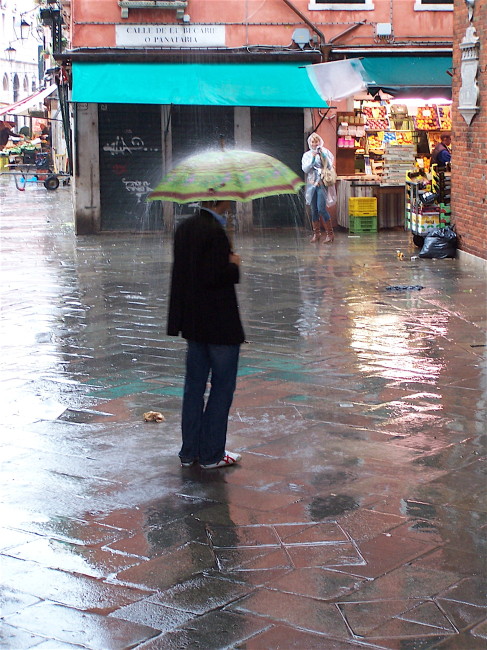 Kim took these two great rain photos (below and above). 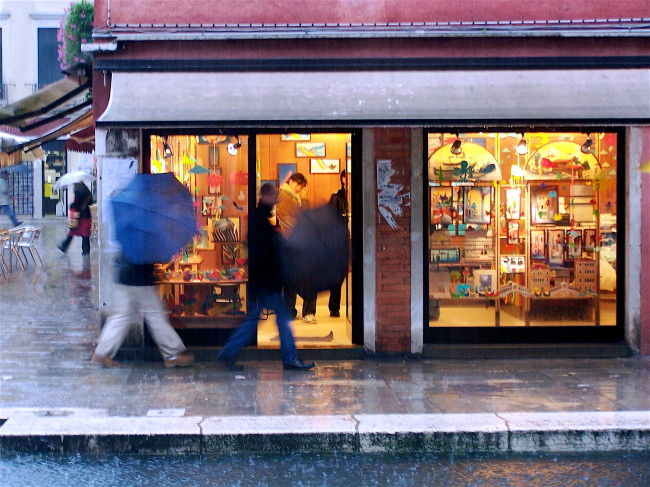 Tracy and I had a great day walking in the rain and experiencing Venice in this different way. It was pretty enthralling, and I believe Venice is one of the few spots in the world where a rainy day can be just as fun, or even more fun, than a nice day. 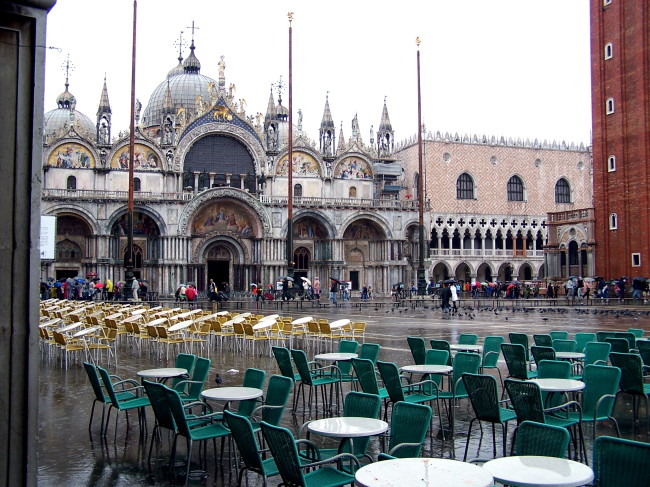 Kim and Mary also had fun walking the streets and alleys of Venice. 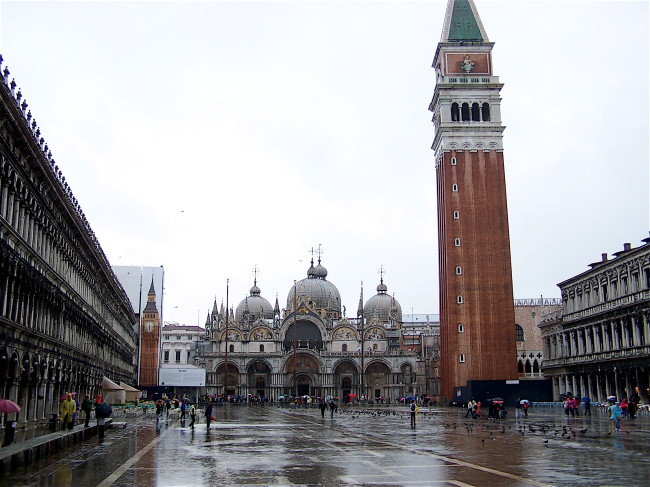 They had lunch at the Cantine del Vino Schiavi near our hotel, which they said was good, and had meandered down to the Campo San Marco, which had put up the planks due to the wet weather. 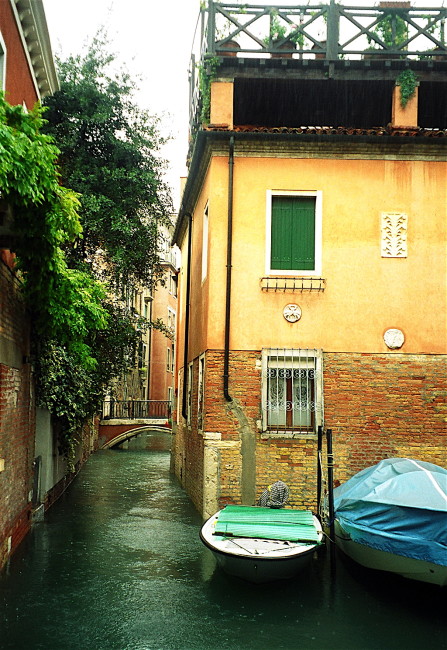 The rain came pelting down, and it seemed nobody in Venezia gave a damn…including us. 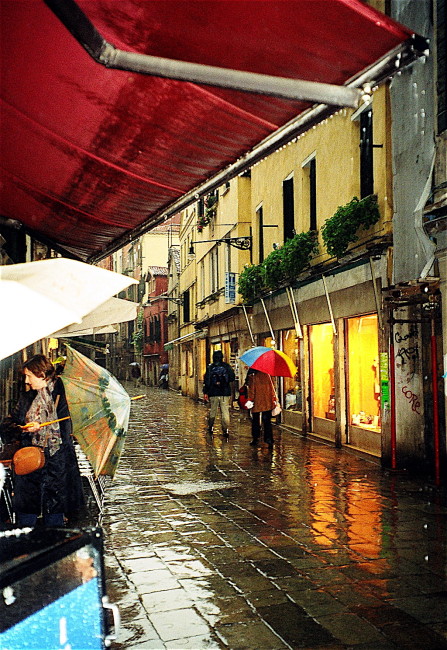 Back at La Calcina, Kim and Mary also had a surprise for us.  Our traveling companions invited us to their room at the appointed 6 p.m. cocktail hour.  There on their table was a Party-In-A-Box.  Cheese, Campari, vino and pre-made Bellinis were all within our grasp. Afterward, there was only one more thing to do, go out to dinner. 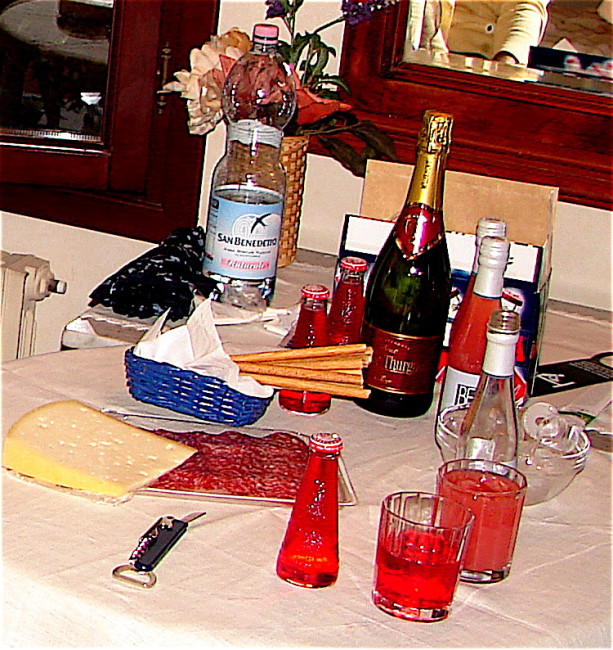 We had made early reservations for Taverna San Trovaso. There are actually two of these restaurants with the same name. The more familiar one on the little canal was closed on Monday (as are many restaurants in Venice), but its sister restaurant was open.

There was communal seating, and this place was packed at just a little past 7 p.m. The folks at the table next to us had ordered a little before we did, and we were not sure where they were from, but when they got their multi-colored pasta dish with lobster arrived at their table, they didn’t look happy. She called the waiter over, and we could tell she wanted to send the plate back because it looked bad (to her).

Fortunately, Tracy’s multi-colored pasta dish arrived about the same time, so once the woman realized that it was supposed to look that way, everything was fine.

Mary decided to be bold and went for the spaghetti in squid ink. It was not the most appetizing looking dish, I must say. Actually, it did look like a ballpoint pen had squirted black ink everywhere on the plate. It was at this moment, I was glad I ordered the veal limone.

Tracy and I ordered a round of Singing Gondoliers after dinner. The waiter, not knowing the name of this local drink had been changed, said, “How about a Sgroppino?”  They’ll get used to our new name for it some day, I’m sure. 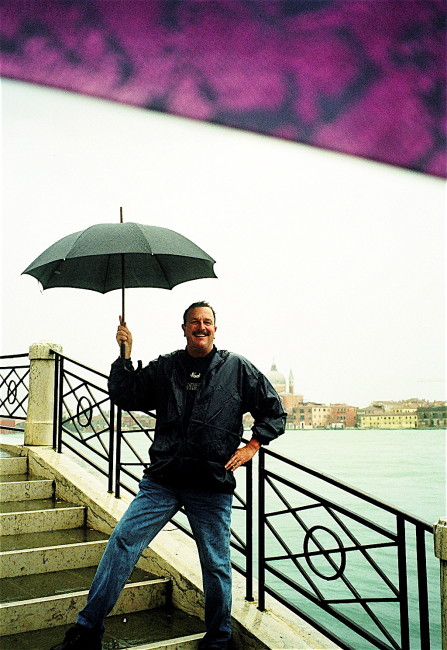 The Singing Gondoliers here were frothier than La Calcina’s, and better (we made a batch at Kim and Mary’s house a couple of months later on Thanksgiving; see I told you we still like each other) and they were delicious again.

When we got back to the hotel, there was a little bottle of Campari and soda that had still not been opened. Knowing we did not want to pack it, I took one for the team and forced it down. Yeah, I didn’t think you’d buy that.

We had an early train to Roma the next morning, and had I known how much trouble I’d get in on the train, I might have stayed in Venezia.

Next: Day Twenty – Strangers On A Train, My Lovely Sherpa, May I Butt In, “Sorry, But The Taxi Is Broken,” The Glorious Galleria, Fake Terrorist Attack and Not The Nina Or The Pinta But The…