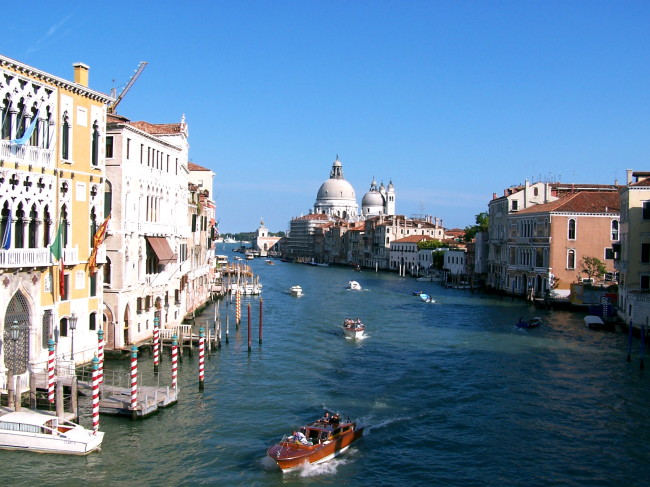 Day Seventeen – Sunny Venezia, Up On The Roof, The Four Seasons Without Frankie Valli and Still Not Wild About Harry’s

As he had promised, Dan greeted us at breakfast, and we said goodbye to the Tourist House Ghiberti and Firenze. Linda, true to her word, was sleeping like a log. We thoroughly enjoyed our stay at the hotel and highly recommend it for price, location and hospitality (photos from THG website). 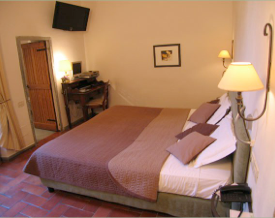 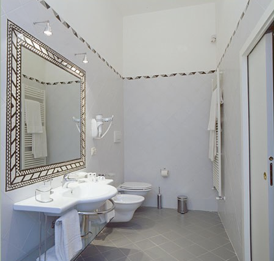 Our train arrived in Venice a little before noon, and we were very cognizant of any restaurant near the train station touting turbot, since $200 for a piece of fish is a tad above my budget. 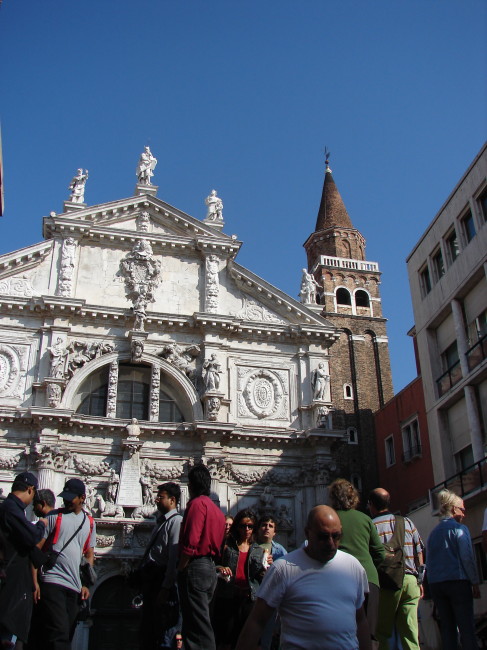 A little digression about Venice: Our first visit to Venice was in 1996 and we hated it. I called it, “Disneyland on speed.”  We had taken the Vaporetto to San Marco, and I remember thinking, “What do people see in this place?”   Souvenir vendors, the plethora of pigeons and the enormous amounts of people were overwhelming.  The day was rainy, and we were happy to get out and go back to Padua where we were staying.  Over the years, Tracy and I thought that there had to be something we missed about Venice because so many people love it.   So, in 2001, we returned (with Kim and Mary) and found out what we missed on the first trip; night time in Venice. 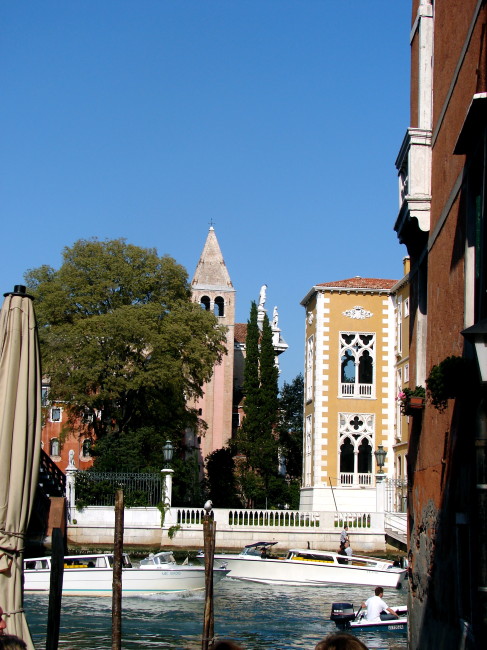 Venice at night is a magical experience, and we stayed away from Piazza San Marco during the day except to go to the Basilica di San Marco and the Doges Palace (which we loved).   We meandered the streets and alleys, and after that trip, decided that Venice would be a place we could come back to in the future. Often. 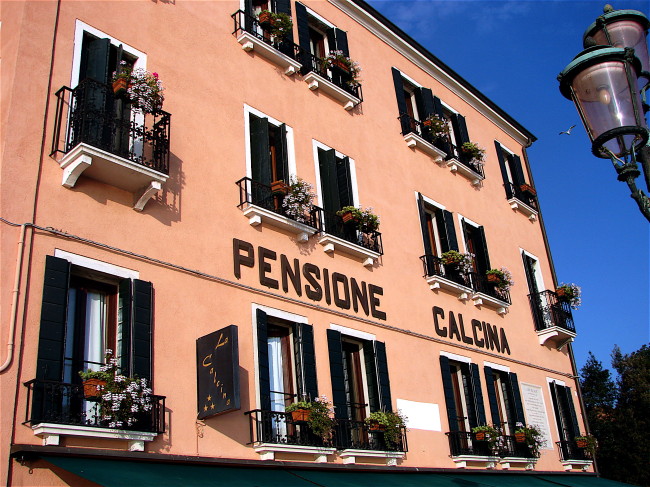 This year, after reading so many great recommendations about it, we had booked Pensione La Calcina, also on Dorsoduro.  The hotel was the home of British author John Ruskin when he wrote “The Stones of Venice” in the 1870s. Funny, I thought, because the 1870s seemed to be how long Mick Jagger and the Stones have been around.  We got off the Vaporetto, walked over a little bridge, and there was the hotel a short distance away. It turned out to be just as nice as the reviews we had read.

Our rooms both had balconies, which offered a snippet of a canal view. But the hotel also has a balcony on top that you can reserve. It was an incredibly beautiful day, so we reserved an hour at 6 p.m. (Vino time) that evening.  After settling in, Kim and Mary went to have lunch toward San Marco, but since we were told this was going to be the only blue sky day while we were here, Tracy and I decided to eat a couple of doors down the canal on the water. Lunch was OK, but just sitting and soaking in the sun and the view was spectacular. 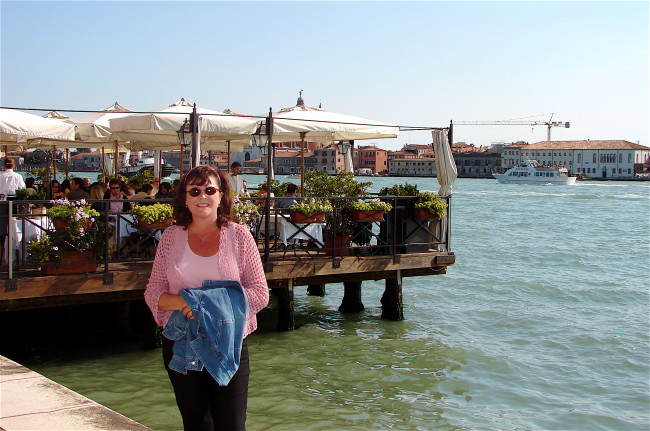 I had not remembered so many cruise ships the last time we were here, but on this day there seemed to be no shortage of them. Fortunately, we did not see any pirates. 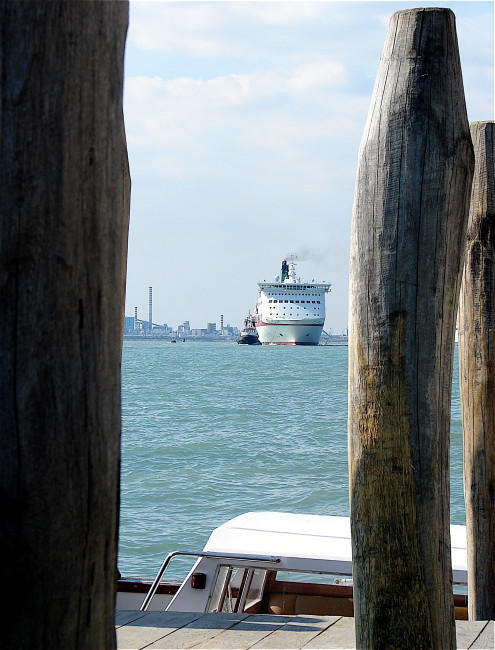 On the way to converge with Kim and Mary, Tracy and I stopped at a nice little church (Chiesa San Vidal) a short distance after walking over the Ponte dell Accademia. On the train that morning I had asked Tracy if she would be up for a little classical musical if we could find a concert. 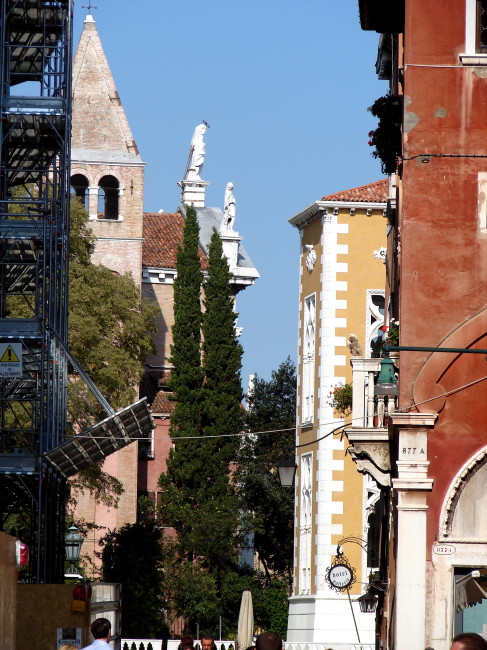 I had mentioned that I would really like to hear The Four Seasons. When Tracy asked whether Frankie Valli was still with them, I knew that my warped sense of humor had now affected her brain permanently. 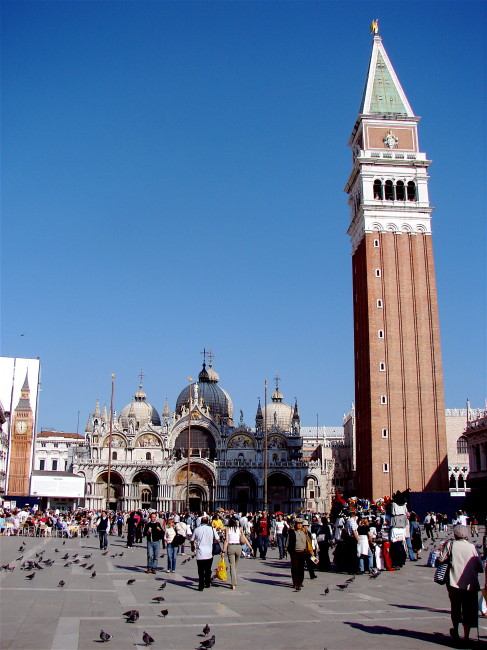 Well, luck was with us. There was a concert on this evening and it was The Four Seasons, Vivaldi-style. It only cost 23 euros apiece, so we purchased tickets for the 9 p.m. performance.

We met Kim and Mary at San Marco later in the afternoon, and the four of us took turns leading the others down streets leading to who knows where? Wandering aimlessly, to me, is part of the great allure of Venice.

I was a little disappointed because the signage seems better than before, meaning it is a little more difficult to get lost (at least while sober). 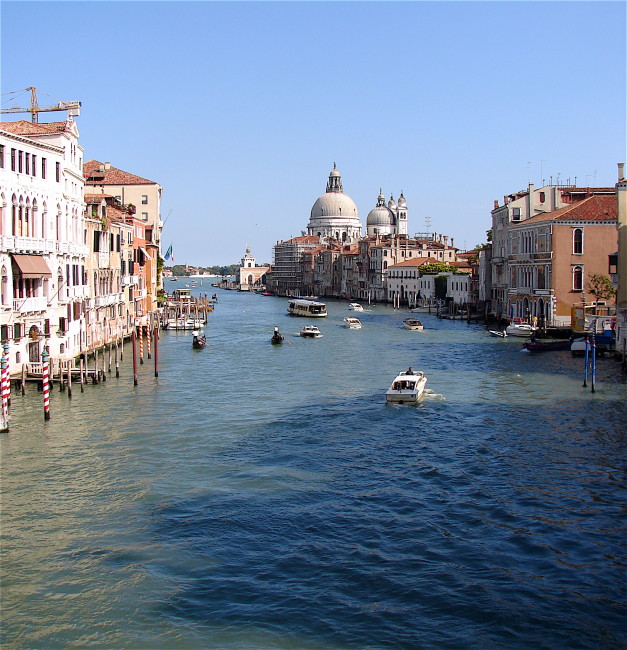 But walk we did on a glorious Venice afternoon. 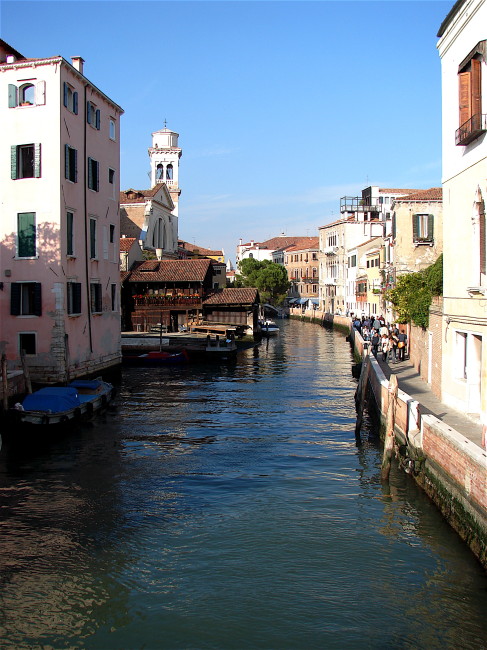 We went from little canal… 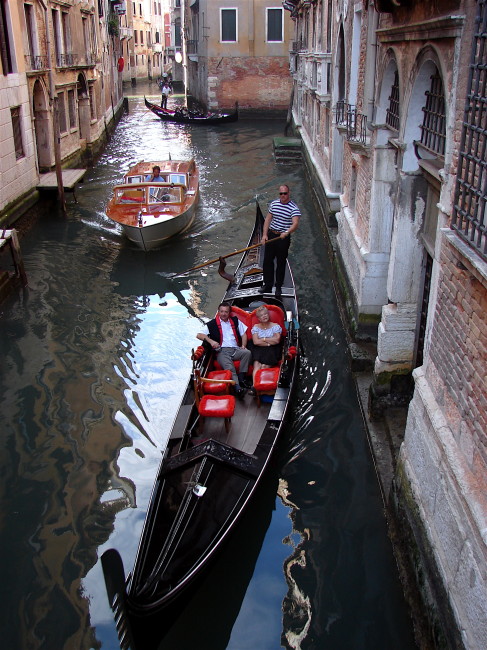 All that walking can make you tired, however. 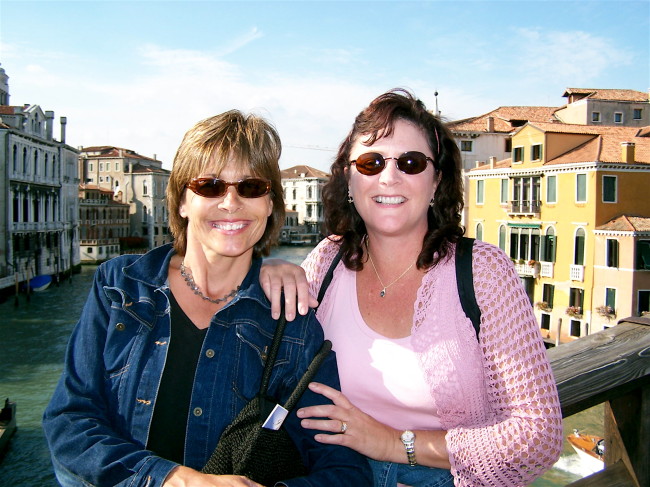 When we returned to the hotel, while the rest of the team took a little nap, I decided to walk to the little wine store nearby.  It’s funny, at home, if Tracy wants to walk around the block at night, it takes an act of Congress to get me off my butt.  In Italy (and everywhere else when I’m on vacation), I’m like the Energizer Bunny who just keeps going and going and going. 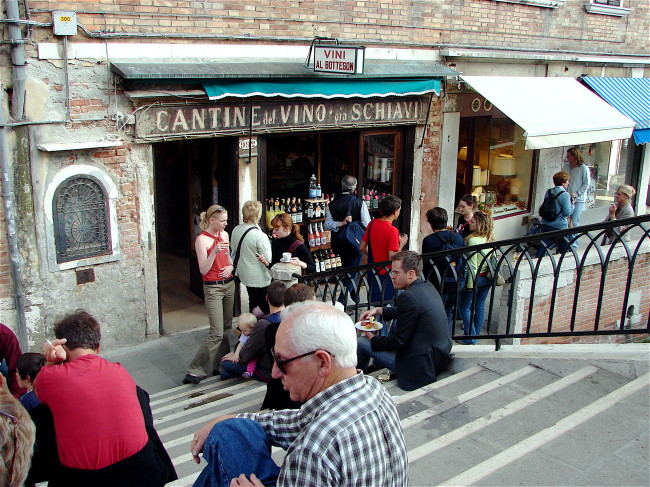 The Cantine del Vino Schiavi was packed on this Saturday afternoon. The place was overflowing with customers, some sitting on the little bridge that sits over a narrow canal.  I was buying some Prosecco for the rooftop rendezvous, but since I was here, I decided it would be a big mistake to not partake in the atmospheric moment.  OK, all I really wanted was a good glass of wine, but it was atmospheric.

I arrived back at La Calcina and rousted the sleepy ones out of their respective beds, because it was nearly 6 p.m., and I think you remember what that means. The view from the rooftop of La Calcina was terrific, but we could feel a change in the weather.  Since we had all had late lunches, dinner on this evening was a little cheese and salami on the top of the hotel. 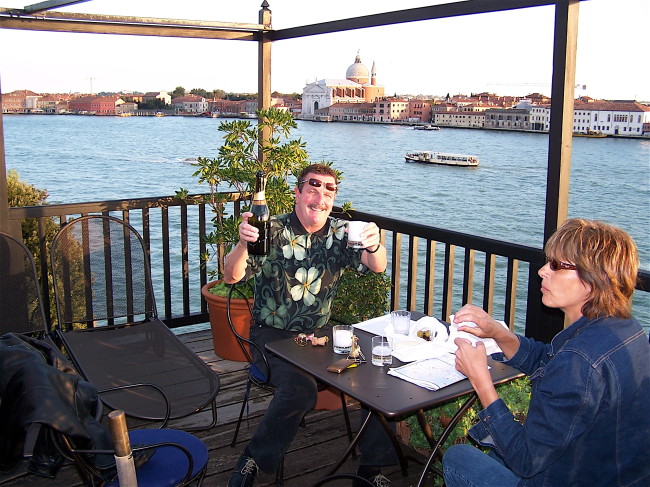 I’m glad we had the opportunity to enjoy the La Calcina rooftop, and if you stay here, book an hour or two and savor the beautiful view the rooftop affords. 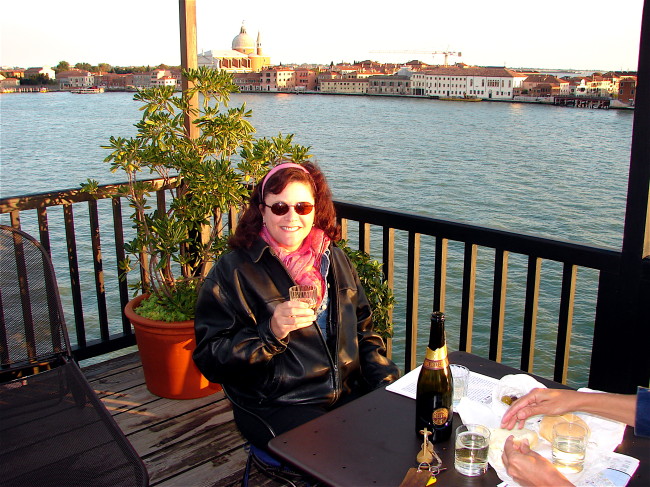 The concert at the Chiesa San Vidal was wonderful, with each violinist taking the lead for the respective seasons. Sadly, they did not play “Big Girls Don’t Cry.”

Afterward, we decided to walk down to San Marco, and I told Tracy that after listening to The Four Seasons I always like to “Walk Like A Man.”  She shrugged and moved quickly ahead of me.

On the way toward San Marco there was an exhibit on Vivaldi, featuring some ancient instruments and a detailed account of his life. We were asked if we wanted to go to another venue the following night for a rendition of, The Four Seasons. Venice: All Vivaldi, All the time!

When we arrived at San Marco, we looked at the places on the piazza like Caffé Florian, but then began wandering toward Harry’s Bar, ostensibly to have a really overpriced Bellini. I had envisioned Harry’s as being some truly Venetian-type of experience, but after gazing in, it just looked like another overpriced, busy bar to me. Yes, I know, some people say you have to do it, but the atmosphere did not appeal to us for some reason, and I can pay too much for drinks anywhere.

Since it was still beautiful outside, we zipped back to La Calcina, where they were open a little later than usual for dinner on the outside patio overlooking the Zattere (photo from their website). 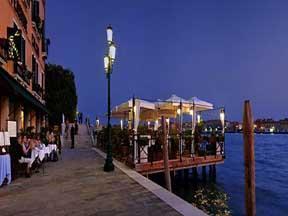 Tracy and I soaked in the glorious evening with a little more vino and toasted our return to Venice. I sasd, “This beats an overpriced Bellini any day.”

It would also be the last time the patio would be open while we were there.

Next: Day Eighteen – Palazzo Perfecto, Spectacular Scuola, The Canal Jesters, What’s That In My Espresso and A Singing Gondolier That Doesn’t Include A Gondola Or A Guy Singing