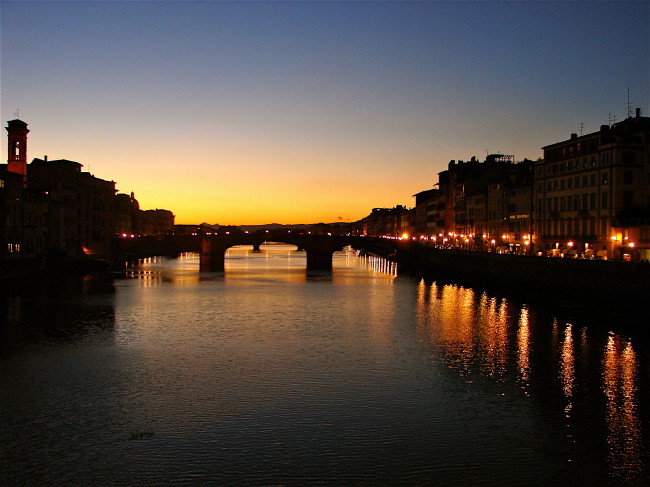 Day Sixteen – Galileo Gives Kim And Mary The Finger, A Museum Off The Beaten Path, Finding The Last Elusive Chicken Sandwich, Racing For The Sunset, A Fantastic Dinner And Introducing Dan And Linda Sharing Tragic (But Funny) Tales Of A Sunken Camera Plus The Most Expensive Fish In The World

We all woke up late, and, the two couples went our separate ways to a couple of the lesser-known Florence attractions. Kim and Mary decided they wanted to see the Museo di Storia del Scienza. The one reason I almost tagged along was to see one of the museum’s more offbeat attractions, Galileo’s finger (let’s see if you drop a finger and a hand from the Leaning Tower of Pisa, will they…?).  For some reason, they didn’t take a photo, so I stole this off the internet. 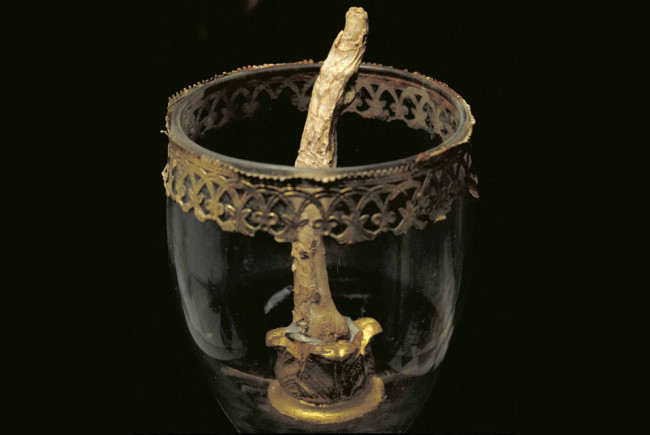 For some reason, Anton Francesco Gori decided to remove the digit when Galileo’s remains were transferred from a small closet next to the chapel of Saints Cosmas and Damian to the main body of the church of Santa Croce.

Tracy and I decided to visit the Chapel and Museum San Marco (picture from website). While in the chapel, I believe I was scammed by the old Fake-Priest trick. He was sitting inside in priest-like garb (hey, I’m a Presbyterian, what do I know?). After I gave him a two Euro donation, he opened up his priest outfit and showed me an “I Love the USA” pin. Oh well, I hope he spent it wisely. 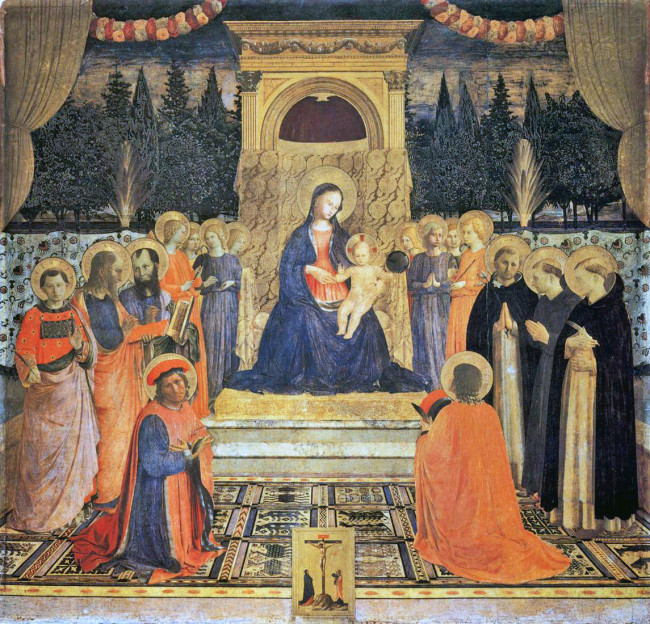 The museum was quite fascinating with interesting frescoes by Fra Angelico, and we saw the tiny rooms where monks lived in the old days. This is a museum in desperate need of an audio tour, but I highly recommend it, and I’d buy the eight euro book first for even more insight into the frescoes. The tour is only four euros. 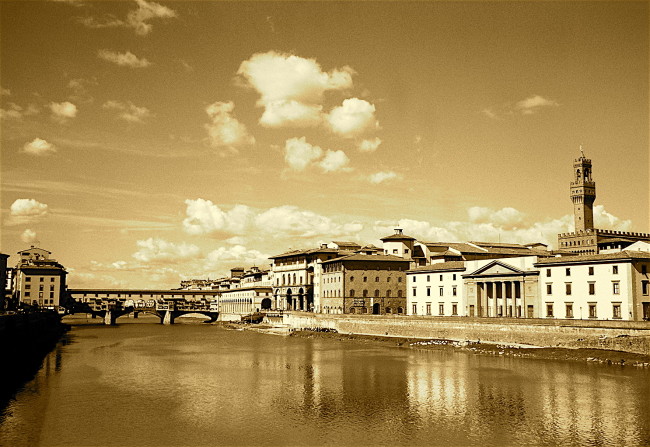 Then came another Tom Moment of Terror. I looked at my watch and it was 11:30 am. The chicken sandwiches had been waiting for us for half an hour. We hustled over to Café Giacosa, and there was only one chicken sandwich left. We bought it, and took it to the nearby bridge. Trading bites, it was if we were about to lose a long lost member of the family, it became smaller and smaller. Before the ultimate demise, I pulled out the camera out and took a picture of the half eaten sandwich complete with its Café Giacosa wrapping. Farewell, delicious sandwich! 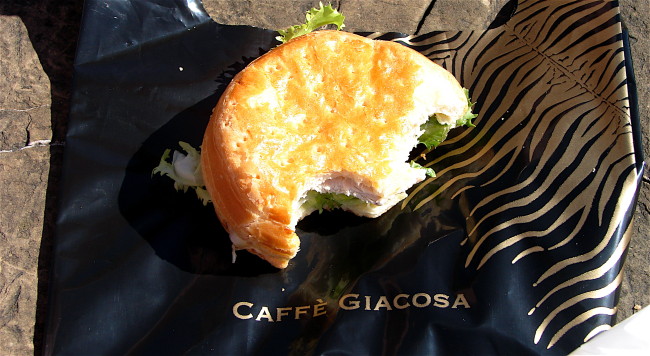 We strolled along the Arno on another beautiful Florence day, walked over to the church of Santa Croce, where Galileo (sans one finger) is interred. 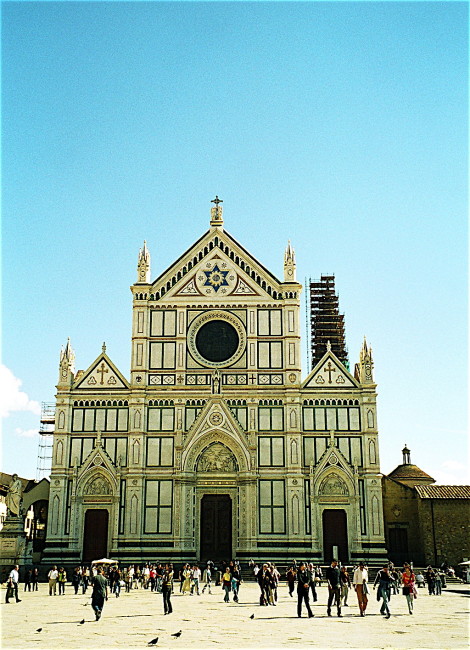 We also walked through Neptune Square (well, that’s what we call it) again. 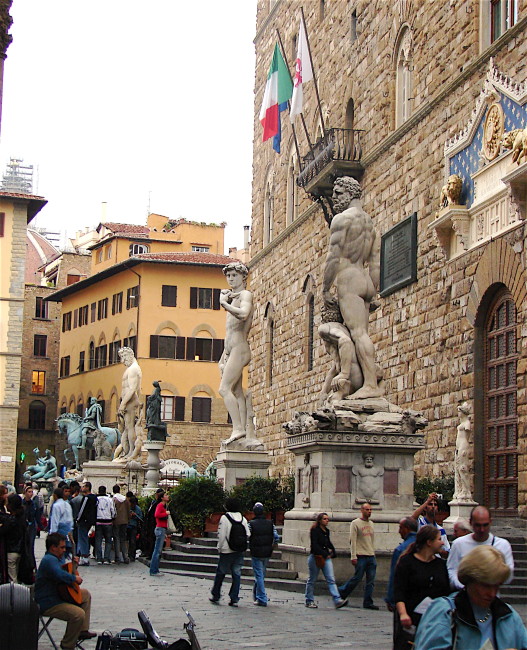 All in all, we walked for a few hours just enjoying the day and soaking up our last hours in Firenze. 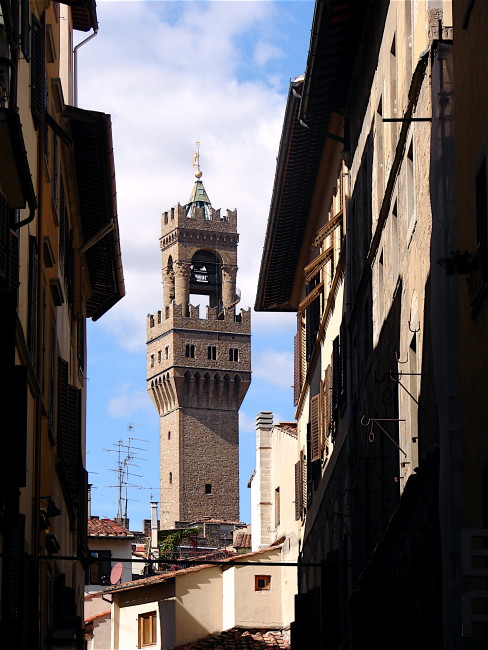 Florence never gets boring for me on any of our trips. 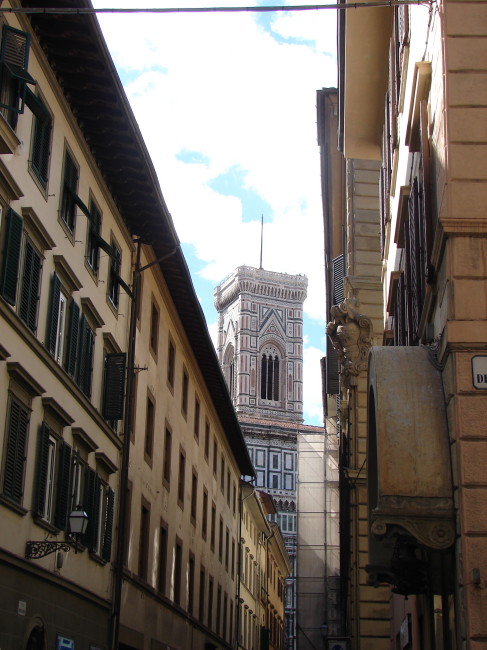 We can (and usually do) walk for hours…without getting too tired. 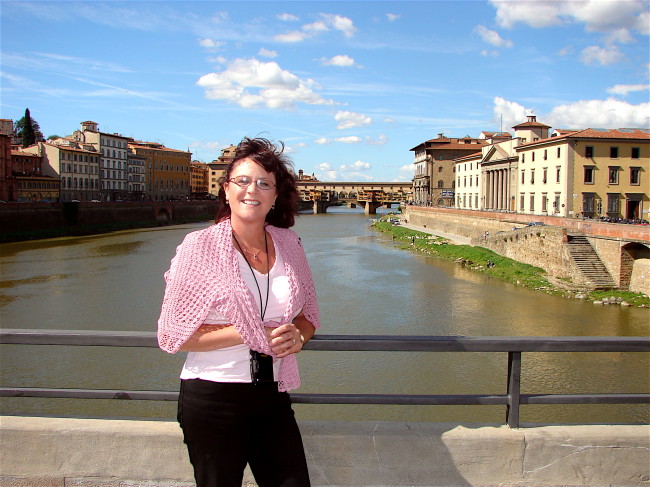 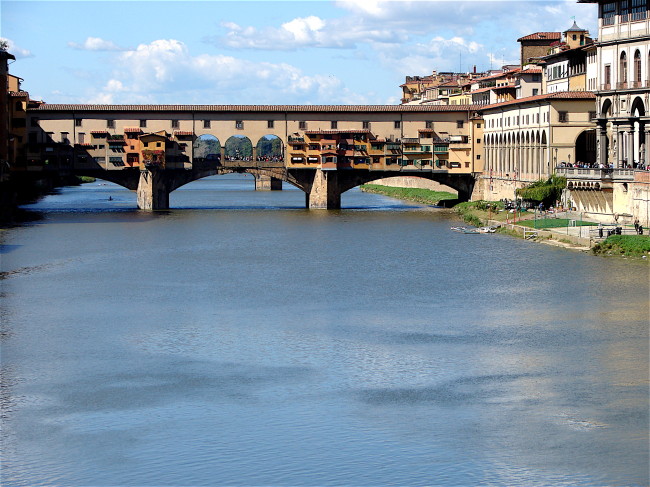 …or one more building to see.  We don’t even mind the hordes of people you sometimes have to encounter. 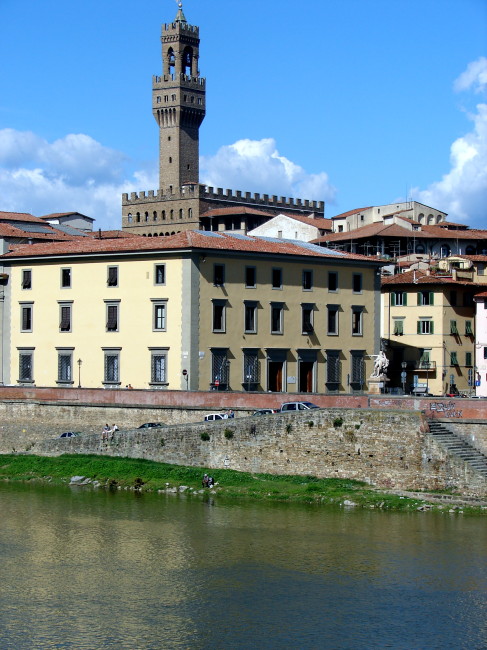 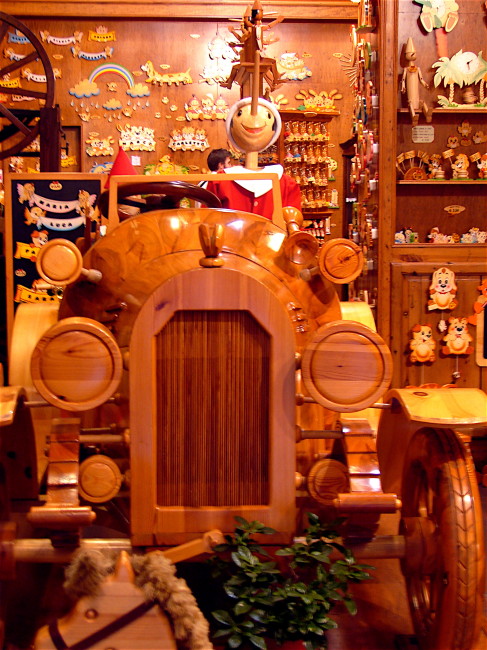 …and took another look at the Ponte Vecchio with people paddling their canoes on the Arno. 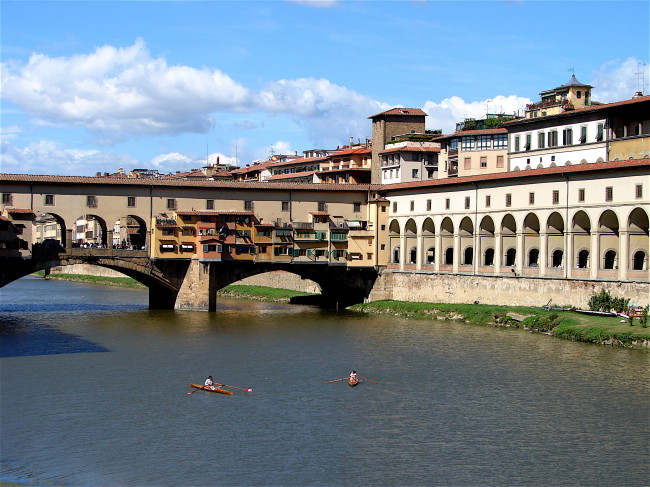 Back at the room, we heard a knock. Mary told us that they had run into our friends Dan and Linda (“hey aren’t you..?) in front of the hotel, and they were now in the lobby.

Dan and Linda had been to Oktoberfest in Munich and then trained to Salzburg and Venice before meeting us here. Besides wanting to say hello to them, we were interested in La Calcina in Venice, our hotel the next three nights after Florence.  They had stayed at La Calcina for three nights, and they loved it. Both were in good spirits, except that Linda also had contracted the “cough from Hell” on the trip.

Dan and Linda eased into the wine and cheese thing in a hurry, and the four of us along with Mary downed some vino. Kim was on his international cell doing some work. Little did I know that in about 15 minutes, I’d be huffing and puffing more than Rosie O’Donnell on a treadmill.  Coming into the vino room, Kim quickly changed from work mode to play mode and said, “Hey, it’s getting dark, aren’t we going to go down to the Arno and take some sunset pictures?” We had talked about this earlier, but I had completely forgotten (sort of like the chicken sandwich). 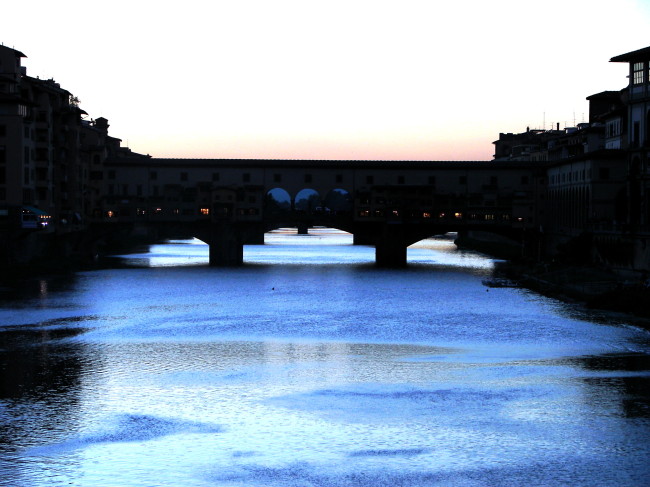 It was time for speed walking. Well, for us it was speed walking. I’ve known Kim since we were freshmen in college in 1970, and we weren’t all that fast in those days. On the vacation, he and Tracy usually walk at the slower pace while Mary and I blaze the trail. Not today. 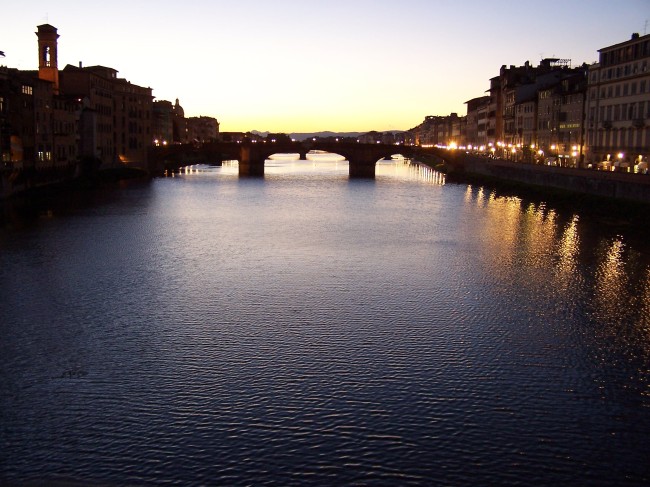 Kim started walking faster than Karl Rove trying to dodge a subpoena. Then it was more of a sprint (well, an old man’s sprint) toward the Arno. We passed Santa Croce on the left, and after a quick wave to Galileo, it was down to the river.

We first took some shots of the Ponte Vecchio, but Kim’s (aka Jessie Owens) quest had just begun.  We walked at a brisk pace to the famed bling bridge and took some really neat sunset pictures from there as well. 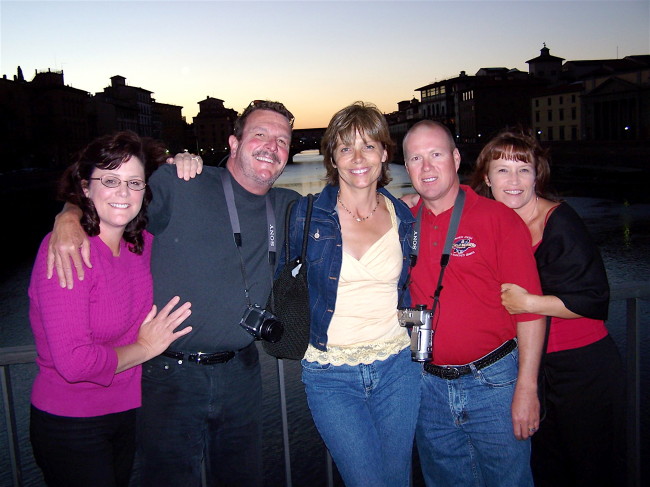 At this point, Dan and Linda were probably wondering what they were getting into by hooking up with this bunch. 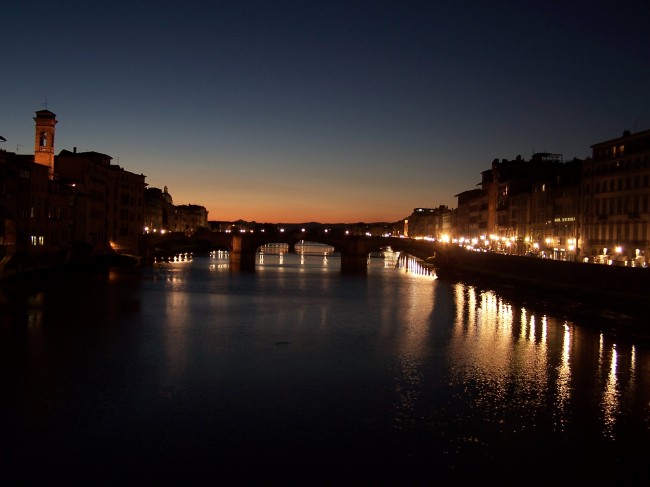 The previous day while Kim, Mary and I had done the Pisa thing, Tracy and I had ventured out and discovered a little restaurant near the Duomo called Ristorante Il Caminetto.  I had made nine o’clock reservations with the owner previously on this day and was excited because I had only spoken Italian to him (ok, with a little help from a waiter), and reserved a table on the patio for six people.  I had hoped I had said all the right things and had not booked a table for Christmas.

Sure enough, our table was ready at 9 p.m., and this turned out to be my favorite restaurant on the trip. The inside of the restaurant is very charming, but the evening was nice (a little chilly, but they have heat lamps), and we really wanted to dine outside. 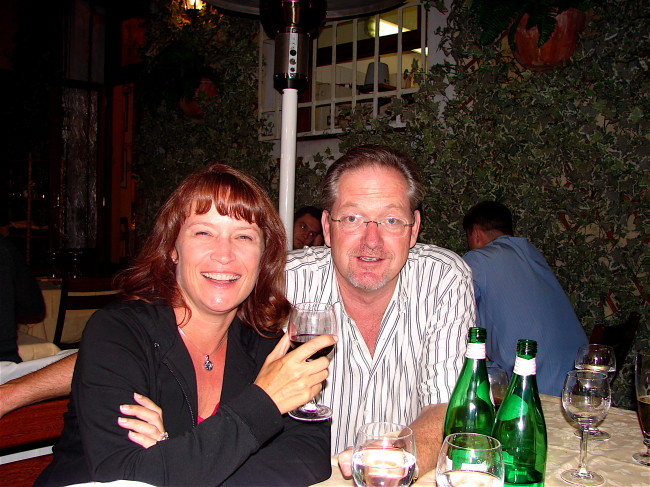 My meal was as good as it got on the trip, and that includes Ristoro di Lamole, along with Cane y Gatto in Siena. I started off with the pumpkin risotto, which was absolutely unbelievable.

The waiter was very excited when I ordered the evening’s special, the Beef del Imprunetta (that name might be a little off, but the 9 euro, one litre wines were going fast and furious this night). The dish is a peppery beef stew in a Chianti sauce that the restaurant doesn’t serve very often, but our waiter felt it was the best dish of the night, and he was correct. 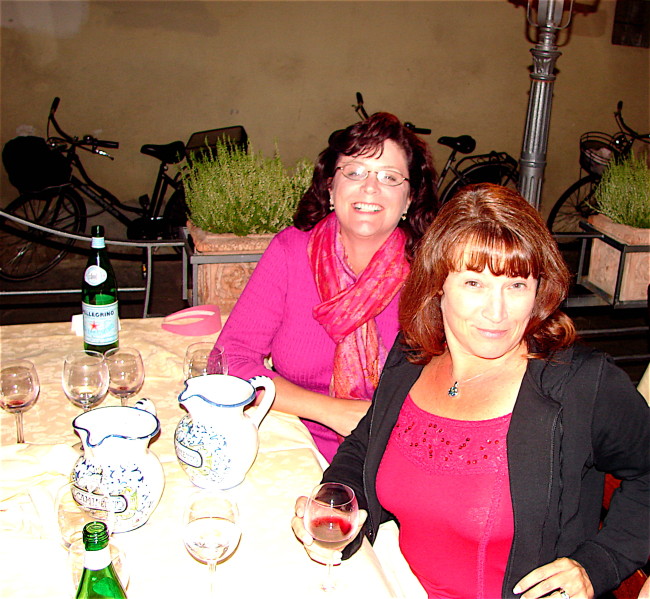 Not that anyone had a bad meal, but my two dishes were spectacular, so it became my Numero Uno restaurant of the trip. It was so good that Dan and Linda ate there two nights later, and said it was just as terrific. Total cost for the six of us was 168 euro.

Oh yeah, I almost forgot the incredible side dish. The roasted rosemary potatoes here were incredible. The table ordered extra helpings (wow, a talking table). Similar to the chicken sandwich, it doesn’t sound that spectacular, but take my word for it, if you go here, order them.

During the evening Dan (seen below with Mary) and Linda regaled us with stories from their trip to Oktoberfest, Salzburg and Venice. They had quite a fun time at Oktoberfest (what they remembered), and fell in love with Salzburg, too. 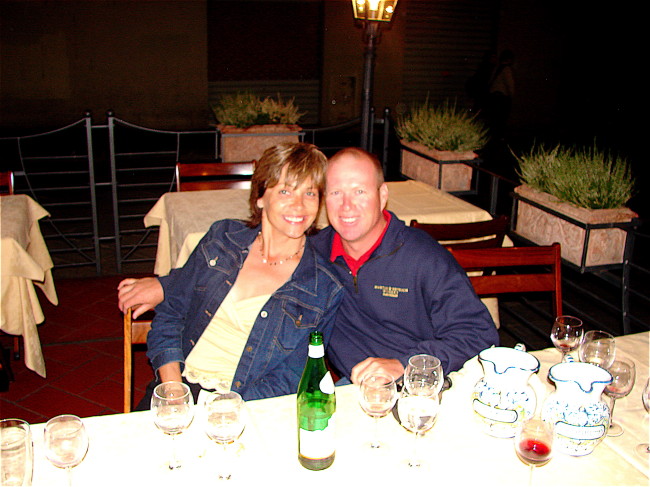 It seemed that Dan had a little trouble with cameras during his journeys, however.

His digital had bit the dust before he got to Venice, so wanting to take some pictures while there, he bought a little disposable camera to take up the slack. He was nearing the end of the role and was taking a picture of a really cool boat.

As he positioned himself for his final picture, one of the women (who were with Dan and Linda on the first part of their journey) accidentally hit his elbow. Needless to say, Dan has no pictures of Venice and the canal has another tourist souvenir camera.

We had already taken the Doges Tour a couple of times in the past, but were glad to hear that Dan and Linda loved the experience and the stories about the Bridge of Sighs. I said, “See, Sighs does matter!” I think Dan would have laughed, but he was about to tell his biggest Venice horror story.

After departing the train in Venice from Austria, Dan and his group were a hungry bunch, and they saw a restaurant as they departed the train station. He ordered the turbot, and, he said it was a nice piece of fish.

Unfortunately for Danno, he had not noticed that the fish was sold by the gram, and this fish must have had a hell of a lot of grams, because it cost our fine diner a total of $200 Euro for his fish dish. He said it was fruitless to argue, and he actually had a good laugh over it. Well, probably not right at that moment.

“You know, I don’t think I can ever eat a piece of turbot for the rest of my life,” Dan told us at dinner (picture shown on right is not of his actual dish, but still enough to give him nightmares).

I replied, “Look at the bright side. Your fish was less expensive than our tank of gas in Gubbio.” Vino, at a good price, can make anything seem humorous.

He couldn’t remember the name of the restaurant (sort of like I didn’t want to hear the word Diesel), but the restaurant was located near the train station, and Danno told me to tell future visitors, “Beware of a limping waiter pushing the turbot on the menu.” 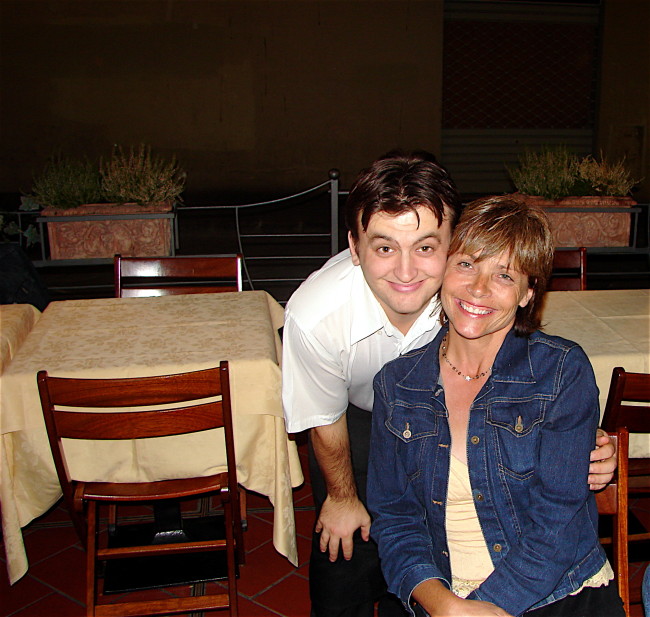 We all had a blast at Ristorante Il Caminetto, and by the end of the evening knew all the waiters (one of them shown here with Mary) and numerous patrons on the patio.

Back at the hotel, Dan said he would get up early to say good-bye before we headed to the train for Venice the next morning. Linda made no such promise knowing they would hook up with us for the last three days of the trip in Rome. 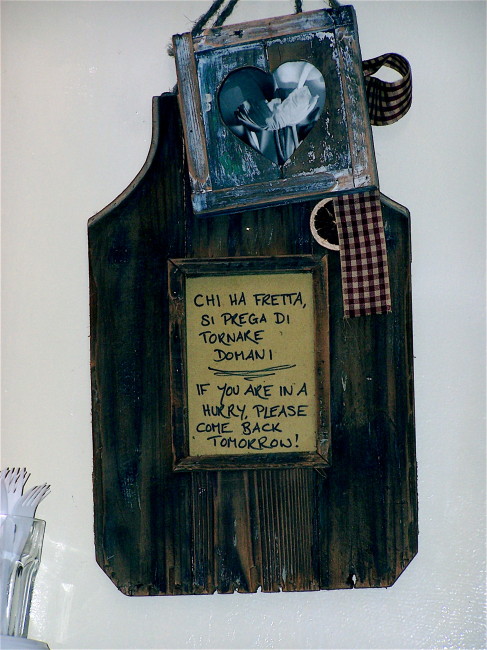 (During the day, Kim and Mary ducked in a restaurant that had the above sign up on its wall with the inscription, “If you are in a hurry, please come back tomorrow.” This phrase is one of the many things that makes Italy so enchanting)

Next: Day Seventeen – Sunny Venezia, Up On The Roof, The Four Seasons Without Frankie Valli and Still Not Wild About Harry’s