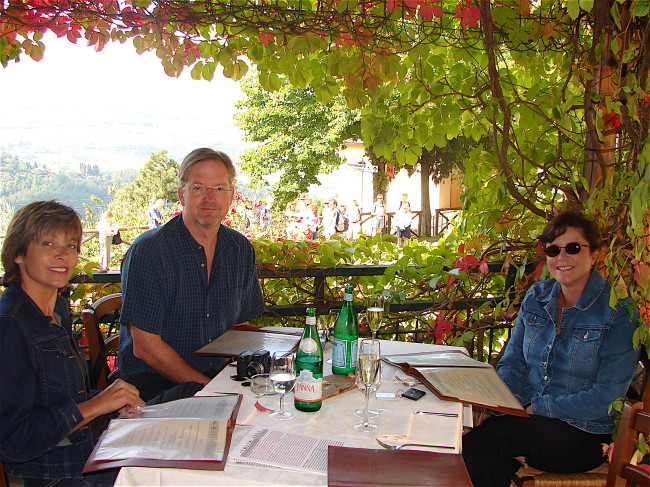 Day Twelve – A Close Call, Lunch For The Ages, The Great Danes, The “Undiscovered” Hill Town And Catching Some Late Afternoon Rays

We said goodbye to Alexandra at Piccolo Oliveta. Tracy had started calling her “my new wife” since she believed I was trying to flirt with her (a shocking assumption). After receiving some parting gifts (olive oil) and flirting with her more (oops), we hit the road and bid goodbye to Siena. 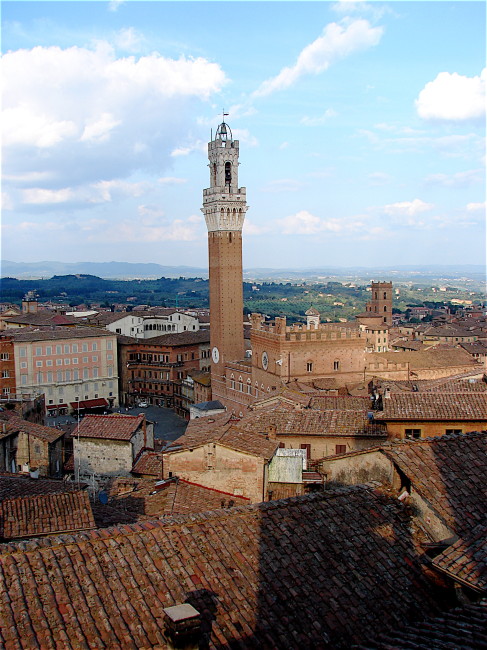 From this point on, if (I guess that should be “when”) Tracy became annoyed with me, she’d say, “Well, maybe your new wife will like that.”  As we rounded a blind corner getting out of a Siena, a large truck traveling at an excess speed veered halfway into our lane.   We narrowly averted death by the nimble maneuvers of Tuscan Tom, and we were safely on our way.   Alexandra never knew how close she had become to being a pseudo-widow.

The Karen Valentine Highway was beautiful. 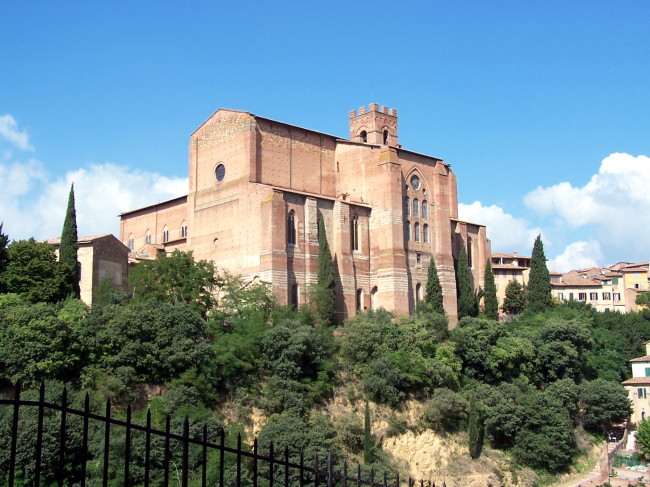 We passed by our new accommodation (where we would check in that afternoon) and drove toward Greve in Chianti.  Before you reach Greve, there is a sign for Lamole, a town I had read about, but it was a restaurant (Ristoro di Lamole ) with a spectacular view that had piqued my interest before we left that we went in search of on this morning. 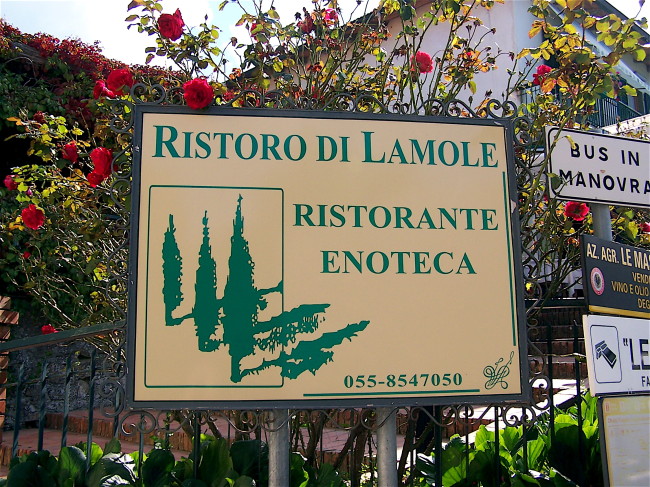 We passed the Villa Vignamaggio vineyard (the winery where the girl who posed for the Last Supper lived back in Da Vinci’s day).  Speaking of the last supper, Tracy and I were still full from the Cane y Gatto experience of the previous evening, but by the time the short, uphill journey to Lamole had been successfully navigated, not surprisingly we were ready to eat again. 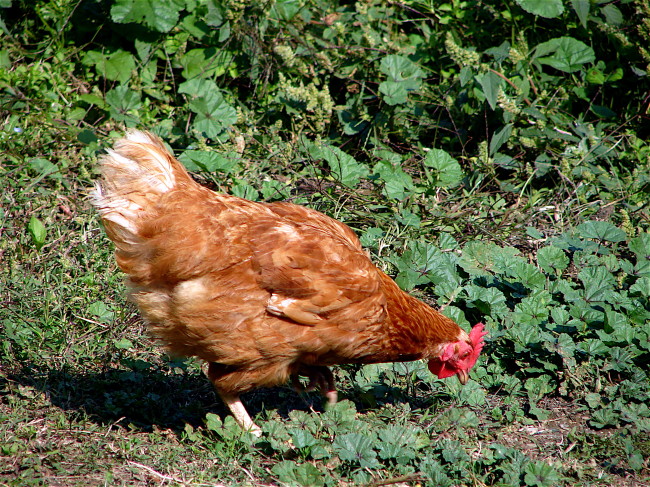 Truthfully, I don’t know how the four of us fit in the car together with all the food we ate.  On the way up the hill we passed by someone who we hoped would not be lunch.

In Lamole, Mary jumped out of the car (after it had stopped) and ran into the local church.  “Had you read about this church?” I asked as she left the church. 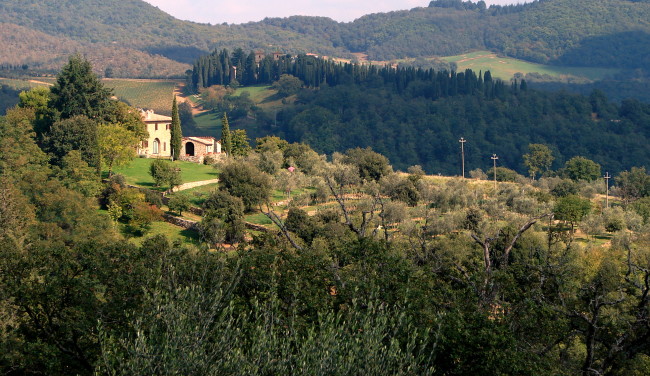 “No,” she answered.  “I was just giving thanks that the truck didn’t kill us.”   Now I know why Mary stopped in so many churches during the trip.   Her hand was getting wrinkled from all the holy water she dipped it in. 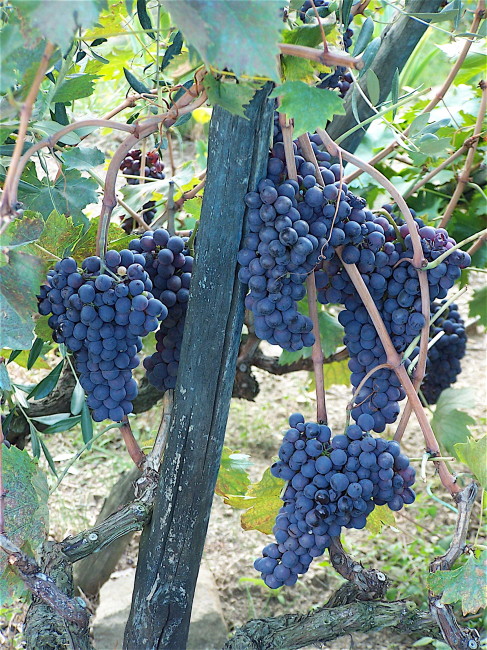 It was a little before noon, and the Ristoro di Lamole (with incredible views out onto the Tuscan countryside) was only open for drinks until 12:30 p.m., so while Kim played “Mark Focus, Professional Photographer” and took some lovely grape photos, we sat on the patio and talked to a group of Brits who were on a tour.  When Kim came back, he told them that he and Mary were on Tom’s Tuscan Tours, and they should think about signing up.

I think I had them at one point, but their tour director showed up, and they were back on their organized tour.  Our tour voted to stay for lunch (it’s a democratic tour, for the most part), which turned out to be one of our best decisions of the trip. 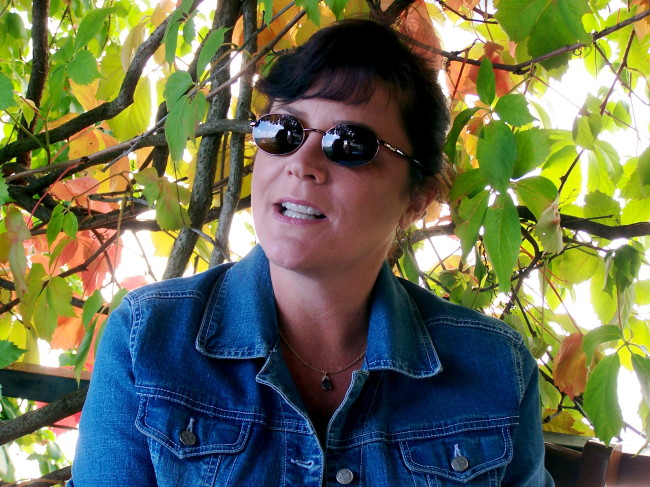 In the U.S., if a place has a view, the food is usually mediocre, at best.  Not here.  The food was spectacular, the ambiance sitting on the patio amidst the vines was wonderful and the waitress was very funny, although like Mary and my new wife, Alexandra, she had a nasty cold.  “I’m doomed,” I thought. 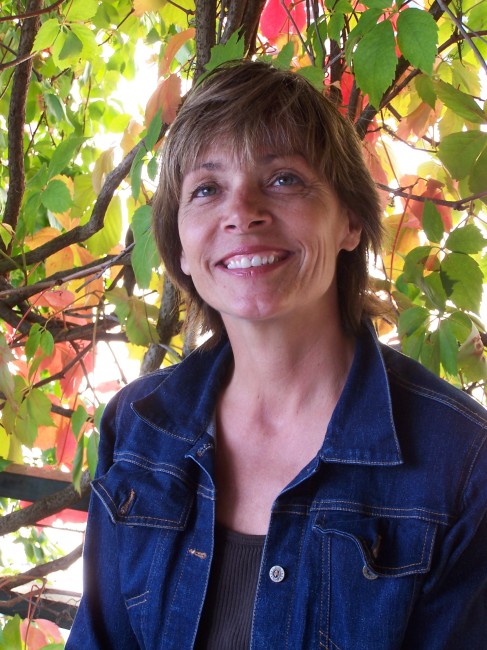 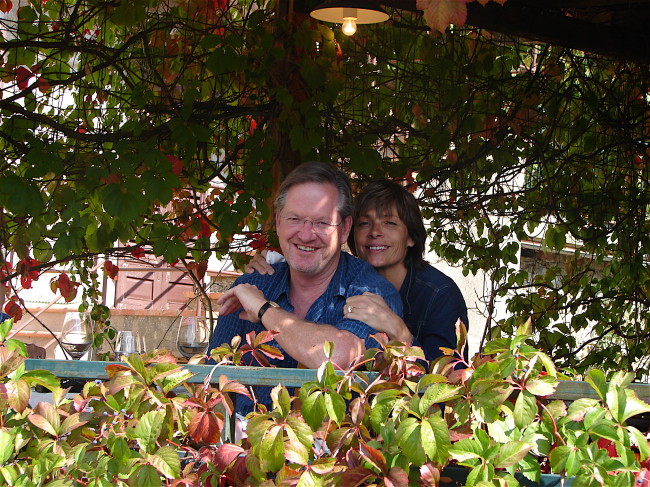 Even my current wife, Tracy, was starting to cough.  So many wives, so little cough drops. 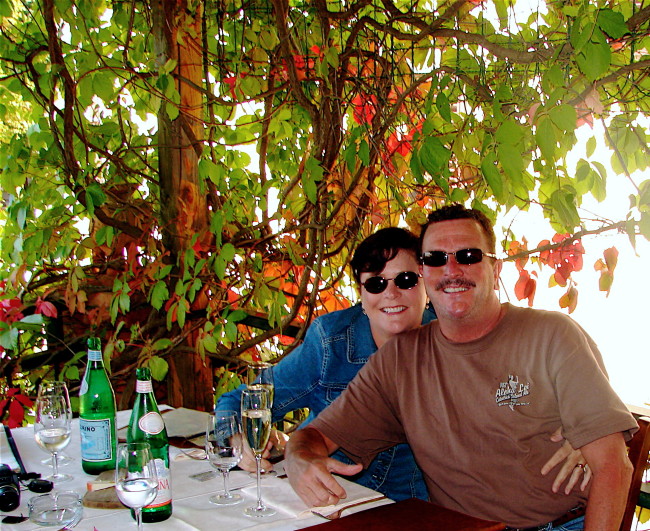 Every dish was fantastic: Ribollito toscano, gnocchi with roasted tomatoes and olives, a pecorino ravioli with the freshest pears ever grown (and drizzled with Lamole Olio), a pasta with pork, zucchini and carrots. 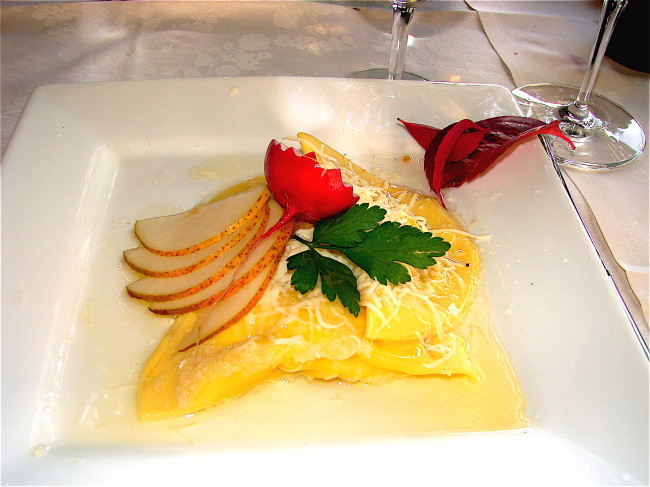 Finally, the lunch was topped off by a dessert of chocolate cake (more like a dense brownie) with whipped cream and wild berry sauce.   They even gave us complimentary limoncello (a move that could have bankrupted the restaurant) and left the bottle on the table if we wanted to consume more.  This meal experience even topped the Cane y Gatto, and the price of the meal was about 1/3 the cost of of CyG, including Prosecco and vino. 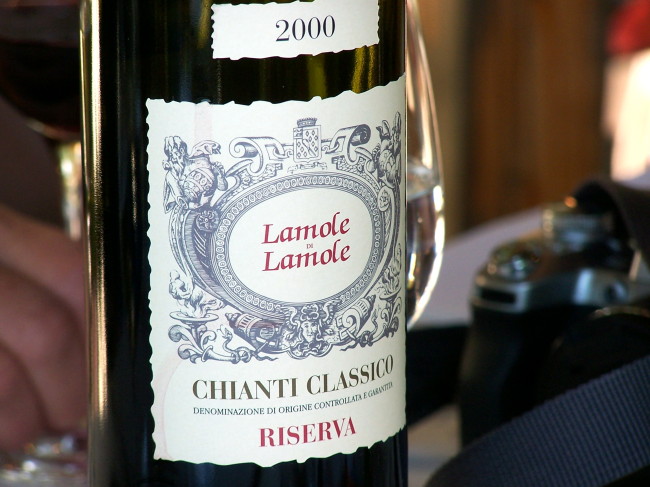 Kim said, “This meal is on us because of all the work and preparation you’ve done.”

Sure, I could have just said a pleasant, “Thank you,” but I all I could blurt out was, “Damn, if I’d known you were going to pay, I would have ordered another dessert!”

Tracy thought this Lamole olio was the best olive oil we had tasted on the trip (and truthfully … in her life), so we bought some of that, too.   It was fantastico!

Near the end of the meal, we started chatting with a couple from Denmark, who come to Chianti for a month each year.  They have a place in Panzano in Chianti.  Both were very friendly and talkative.

Just a little digression for a moment:  One of the reasons Kim called it “Tuscan Tom’s Tours” was that I prepare for a trip longer and am more detailed than most people (which is why he so graciously picked up the tab).  I had sent them descriptions of virtually every hill town in Tuscany and Umbria, complete with attractions, history and digressions,  It’s even color coded (what, me anal?).  I had also done the same for Florence, Venice and Rome.  All in all, I had prepared about 250 total pages for our trip full of useful, and I hoped, humorous information, not to mention pictures of the areas we were going to travel.

Anyway, the Danes started telling us about an Enoteca in Greve where you pay money at the counter and are then given a plastic card, which you stick in the vino machines to wine taste.  Before they could give the name, I whipped my papers from my back pocket and said, “Oh, do you mean Le Cantine?”

“Why yes,” they said. “How did you hear of that?  By the way, there is a famous butcher shop in Greve.” 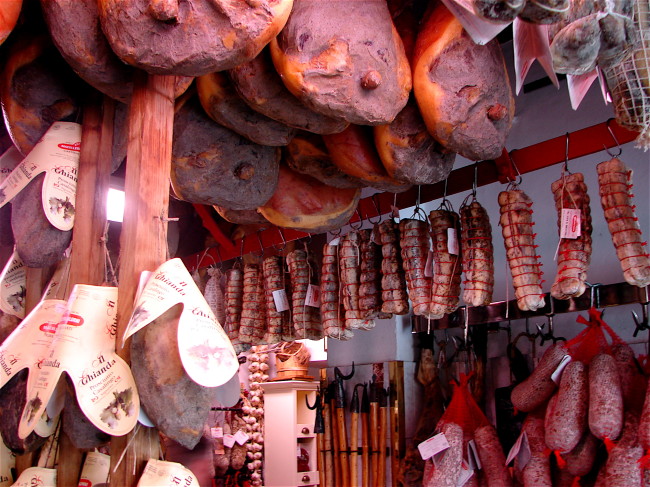 “Is that Macelleria Falorni?” I said.  “Doesn’t it have a bunch of hanging prosciutto inside?”

Now the Danes were semi-impressed.  Kim just said, “This is why we book Tuscan Tom’s Tours.”  A little later they said, “We have a favorite restaurant in town,” and gave me a glance.

“I’ll bet it is Bottego del Moro,” I said.  They nodded and laughed and said on their next visit to California they’d call me for Tuscan “Tuscan Tom’s Tours of Southern California” (I stole that name from the Los Angeles Angels of Anaheim).

The great Danes were drinking a bottle of wine from Volpaia.  This was not in Tom’s Tuscan Tours’ guidebook, so we listened attentively as they talked about this little place. 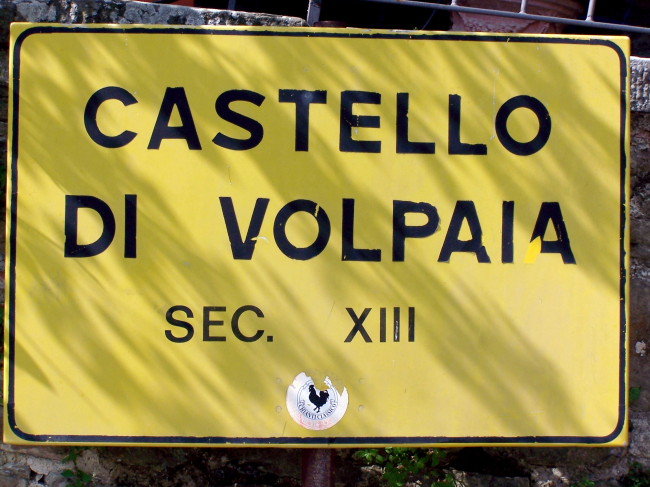 “Just up the road,” they said, “was the charming town of Volpaia.  Not too many people know about it.”  That was enough for us, so we had to go take a look.  I gave the Danes my business card, and told them to call me for a tour when they come to Southern California.  I promised lots of wine (a good selling point no matter where one travels).

We started toward tiny Volpaia.  The narrow road became narrower, and the cement turned to dirt, and we were all thinking that we were going to “discover” this town. 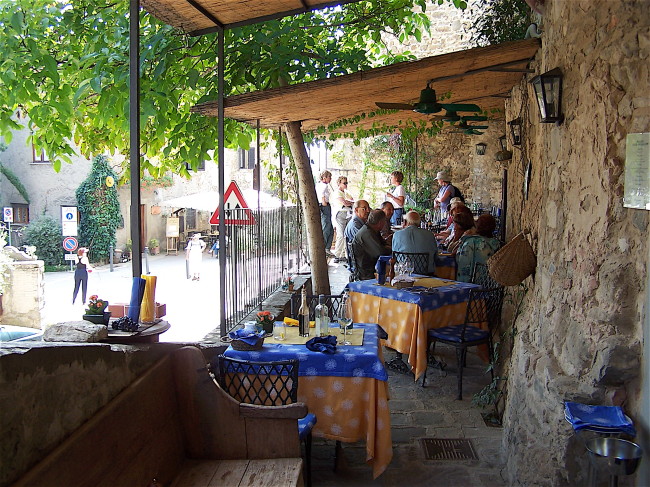 Unfortunately, when we hit the center of town, it seemed a couple of tour buses had “discovered” it, too, and the place was crawling with Americans (the most we had seen on the trip to this point). 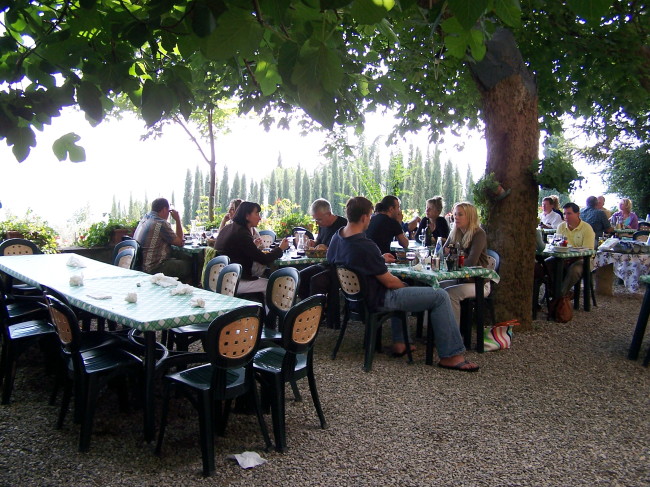 Outside of the tour buses, the town was very cute, and looked like it had a couple of very charming restaurants.  There was also a guy who had his eye on Mary, and it wasn’t Kim.  We deemed him a harmless voyeur and moved on. 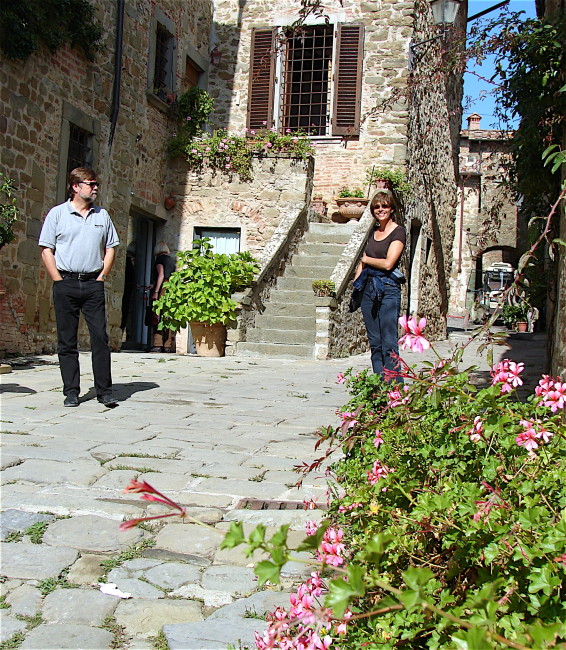 We did buy a couple of bottles of wine from the store in Volpaia and left, feeling much like Columbus would have felt had someone told him Leif Erickson discovered America centuries before he did.

We made a quick stop in Panzano to see our friends’ adopted Chianti town and to look for Dario, the famed butcher, but his shop was closed. 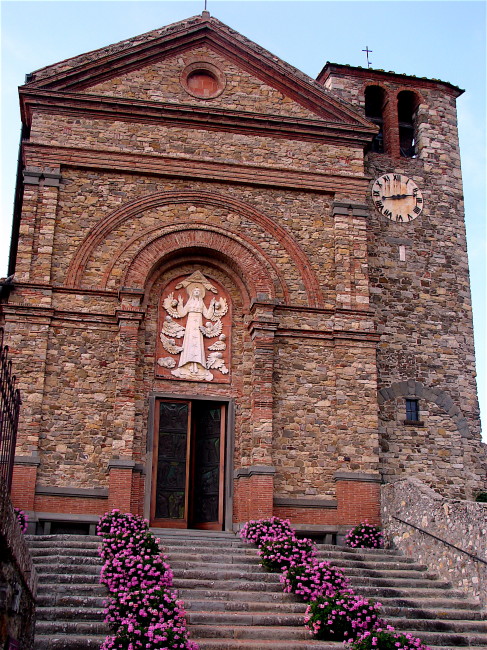 We walked around Panzano for a short time, saw a lovely, little church and, like so many other places, it seemed we had stepped back in time.  Kim took that great shot with the man and his cat in a field. 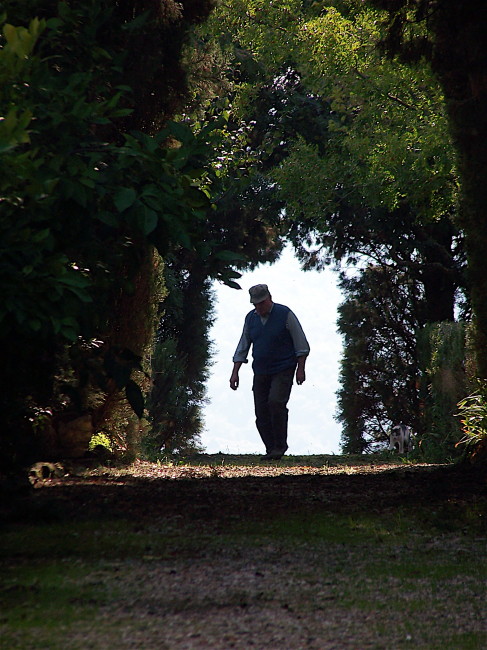 Then it was time for the group to check in to our new “find”, the Il Mulino and a late afternoon round of drinks around the pool. 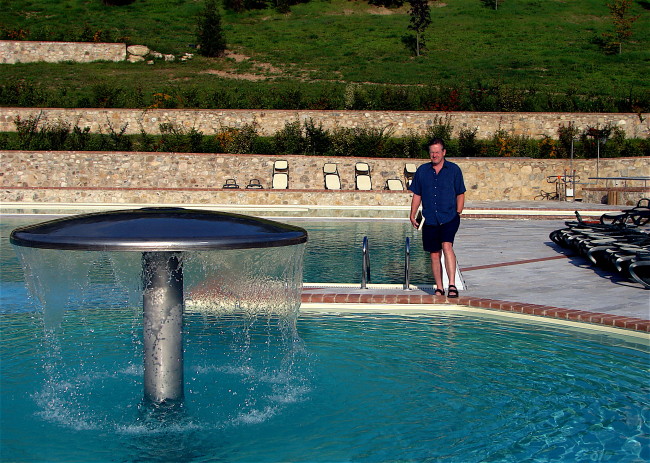 For a couple of hours, we sat out in this great setting, the only four people using this huge area.  We had cocktails, but even better, one of the pools was a “beach low-level water” pool”, meaning we could walk out, and the water only came up a little over the knee. 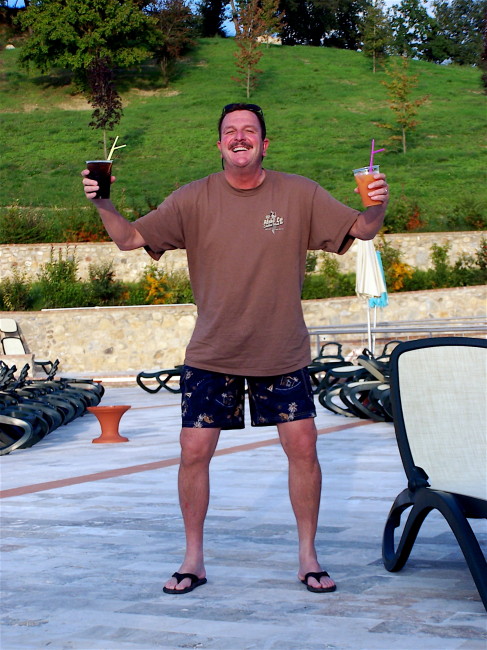 All our aching feet and knees would become rejuvenated in the next two days, with the soothing water and surface providing much needed therapeutic relief.   Well, that and the Campari. 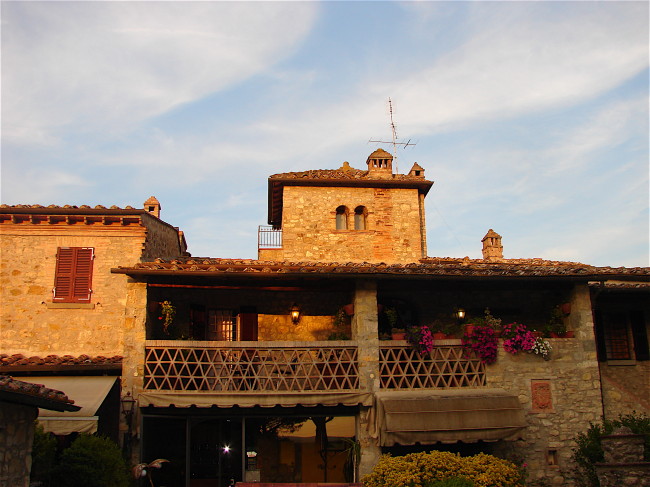 After our relaxing time by the pool, and since we had the room with the balcony, Kim and Mary came over and joined us for some Volpaia wine in the early evening and a view of a gorgeous sunset in Chiantiland. 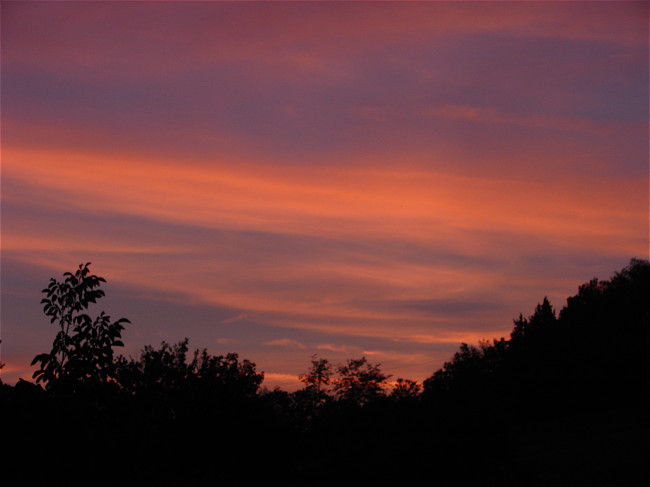 Our room was located right over the hotel restaurant, so as people walked in the front, we wondered if they would ask how they could be seated at the outdoor tables.

The four of us eventually walked down to our restaurant for dinner, and sure enough, some Canadians sitting next to us overheard our conversation about our balcony and said, “We saw you guys when we came in and wondered if they had outdoor dining, eh?”  OK, they didn’t really say eh.

The restaurant served mostly good dishes with a couple of slight misses.  It is relatively new, and we chatted with one of the owners who had previously owned a restaurant in Napoli and in a nearby town before starting this one.  The pork in a balsamic sauce was the night’s big winner and so was the ravioli stuffed with spinach and ricotta in my beloved Pecorino sauce.

The two house wines cost 6€ and 12€ respectively, and they were pretty tasty.

The bed was comfortable, and we slept well.   Tomorrow would be our relaxing day in Chianti; a day where we would recharge our bodies in advance of hitting the big three of Florence, Venice and Rome before heading home.

Next:  Lucky Day Thirteen – Pooling Our Resources, Why Do Men Have Nipples, The Crown Of Italy And Wearing Costumes In Chianti