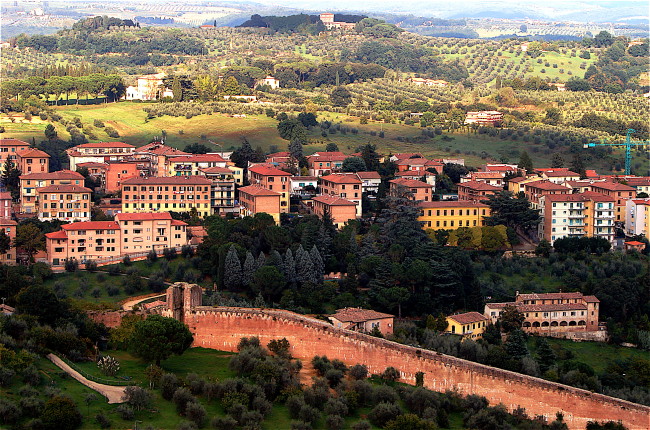 Chapter Ten – Getting High In Siena

Day Eleven – Amazing Find In The Hills Of Chianti, Saint Dead A Head, The Big Climb And Cane y Gatto

Sleeping with the windows open offers one the opportunity to savor the sensuous smells of the Tuscan countryside, unless one is greeted in the morning with wafts of cigarette smoke. The New Yorkers were up early, and to their credit they were quiet. On the downside, they were smoking like a chimney under our window. Yes, lung cancer was in the air (and our room). “It won’t be lung now,” I muttered to Tracy.

The breakfast at the Piccolo Oliveta was fine (good sweet roll and cappuccino), and we decided to explore the land of Chianti on this very sunny Sunday.   Everyone had slept through the night, but as I mentioned, the beds weren’t the greatest. 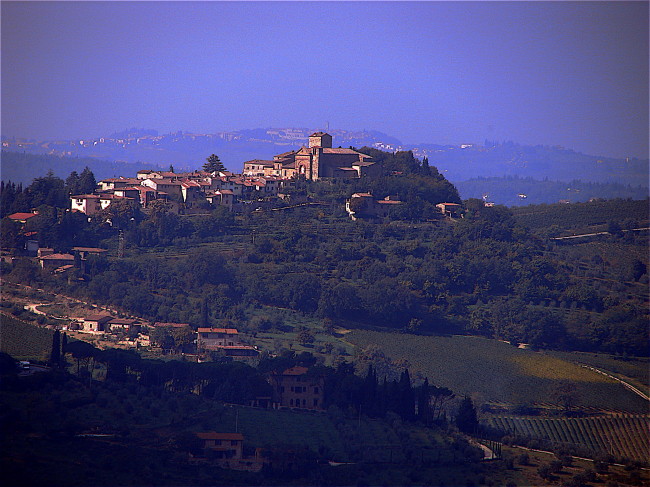 We headed out of town and got on the S222 (or Karen Valentine Highway as we called it in honor of the 1960s’ television program Room 222). 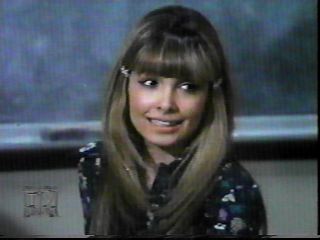 Yes, our minds are full of useless, yet fun, trivia.

As I also mentioned, we were a little underwhelmed with our hotel, but it was not terrible, so we had planned on staying … until we happened upon an oasis in the desert (ok, it was an Agritourismo in the vineyards).  There, about ten miles from Siena, just to the right of the Karen Valentine Highway, nestled in amongst these beautiful vineyards, were a mind-boggling array of swimming pools (yes, plural).  Was it a mirage?  I believe it was Mary who said, “What is this place?” 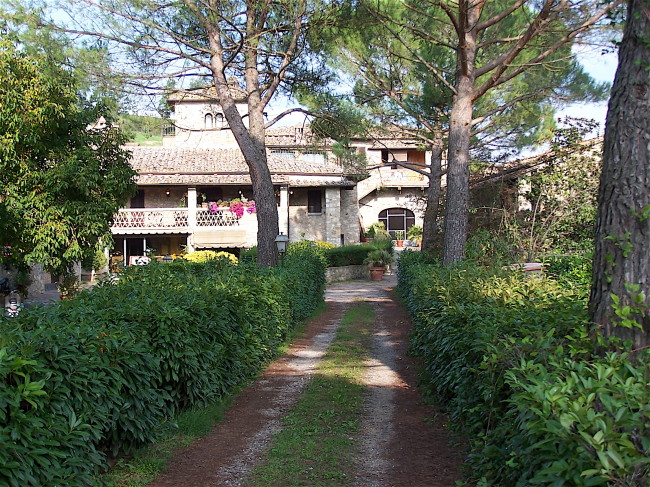 Ask and you shall receive in our rental car. I made one of my many illegal and dangerous U-turns to accommodate her curiosity.  We pulled into a driveway that took us to the Agriturismo Il Mulino.  We got out of the car and walked to the adjacent swimming pools to the left of this lodging and were astounded by what we saw.   A swimming complex that would have been a Mark Spitz and Michael Phelps dream and cost somebody tons of euros to construct was at our fingertips. 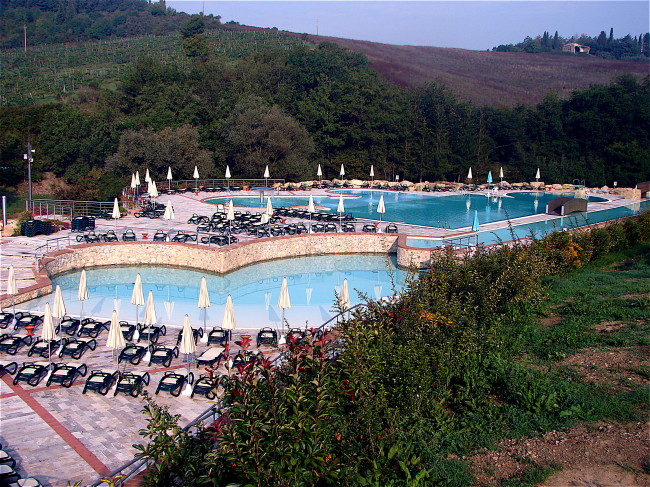 We gazed out at a giant lap pool, wading areas, a regular swimming pool, a place you could just walk out into the water and stand (yes, were feeling God-like), and bridges that connected certain areas, all set out in the midst of this incredible vineyard setting.   It was pretty spectacular! 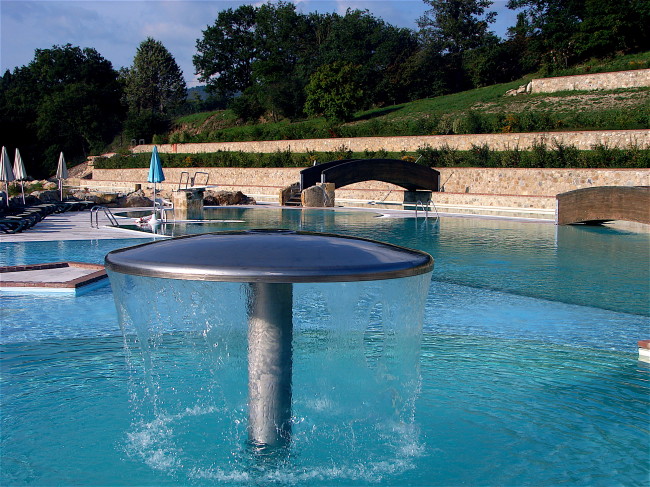 Walking up a staircase, we encountered an area to purchase snacks and cocktails, and there was a sitting area where you could have late afternoon drinks or cappuccinos in the morning. Oh yeah, it had a restaurant on the premises, too. Four minds, one thought; “What does this place cost a night?” A fortune, we presumed.  We walked up the stairs to this little gem and chatted with a woman who knew very limited English. Knowing this place must cost a fortune, we still asked her how much a night was it to stay here. She wrote down the nightly cost on a piece of paper and flipped it around for us to see. I hadn’t looked this surprised since Tracy said she would marry me. 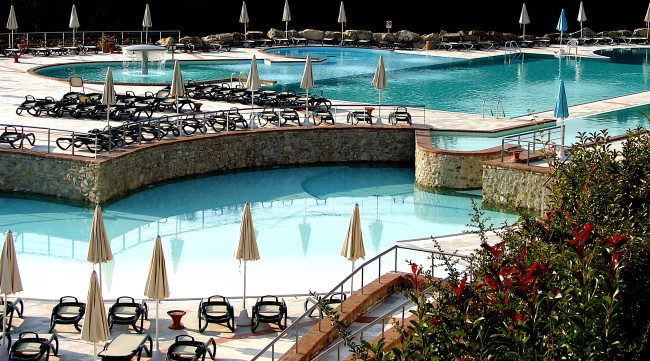 “Are you sure?” I exclaimed (which happened to be the same thing I asked Tracy). Kim then gave me a look that usually was reserved for Tracy when she thought I was an idiot. He laughed and said, “Would you feel better if she told you it was more? Why don’t you talk up the price?”  The cost per night, per room, was incredibly 60€ (not 600€ that I first believed it cost), and since it was September, guests could use the pool (which was actually a new, local swimming complex) for free. Our room (with balcony) was to be 60€; Kim and Mary’s room – sans balcony – was 55€. 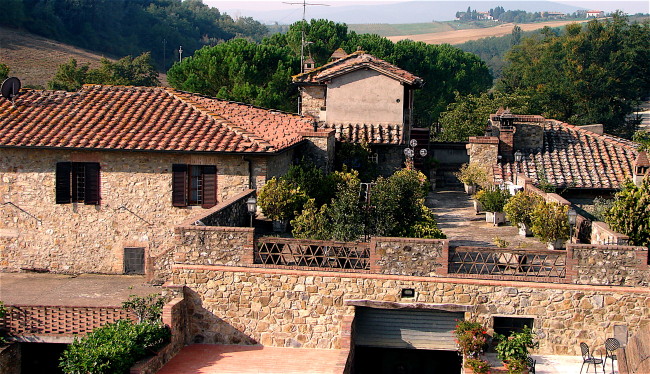 Knowing that everyone was disappointed with the Piccolo Oliveta, we booked two rooms for Monday and Tuesday nights, got back in the car and headed back for Siena to tell the hotel we were going to cut our visit short. Kim was always better at breaking up with girlfriends when we were in college, so he was chosen to tell the woman at the front desk we would be departing early. 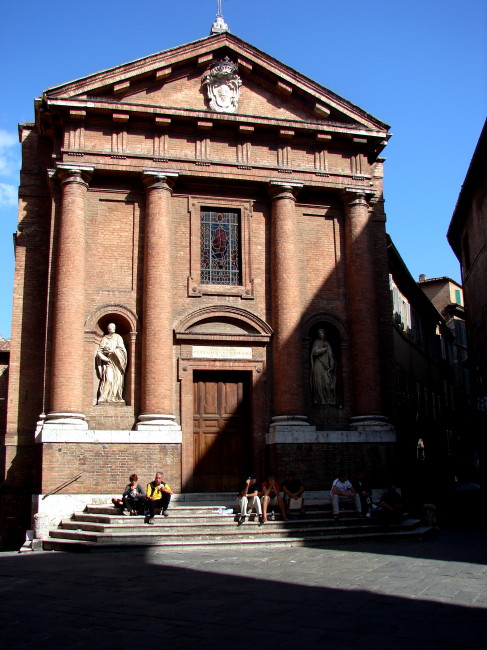 Kim told the truth (unlike our college days) that we wanted to spend a couple of nights in the country instead of the city, and the Piccolo people were very nice about it. We certainly expected to pay a penalty for backing out two days early, and were charged for a third night, which was fair. With the new charge at our agriturismo, it would be a wash for us. 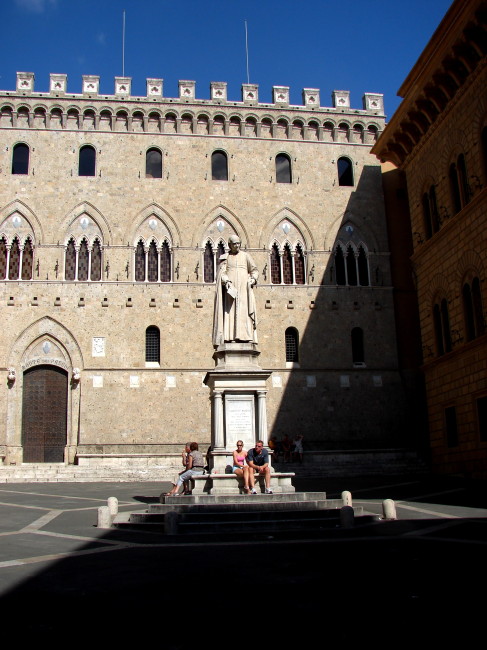 So instead of Chianti on this Sunday, we decided to stay and see the rest of Siena.  As we walked through Siena, I had a terrible thought.  “Oh no, I have reservations on Monday night at Cane E Gatto for Tracy and me that I booked last month.”  Kim and Mary had declined because the restaurant has a set prix fixe menu, and since Kim is allergic (or so he maintains) to tomatoes, he couldn’t take the chance on there being five courses of tomato dishes.  Fortunately, I called later in the afternoon, and they could change the reservation to Sunday night, so Tracy and I could still go that night. 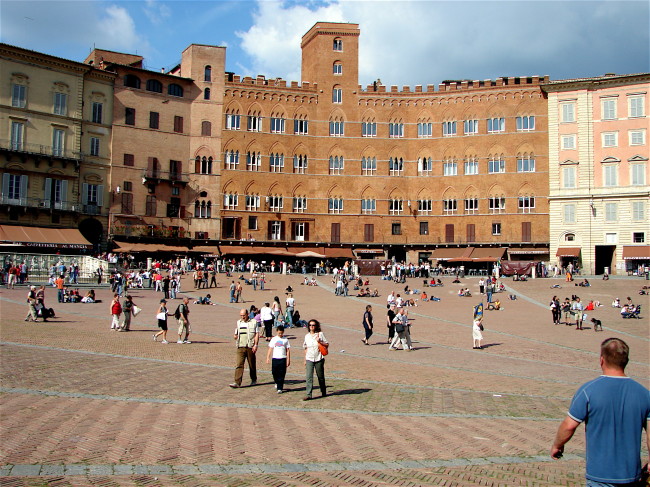 We were all hungry (what else is new), grabbed a bite, looked at a yarn store for Mary and then walked to The Crypt under the Duomo. It was all part of the ticket we had bought the day before, and once again a good audio guide tour provided a wealth of information. 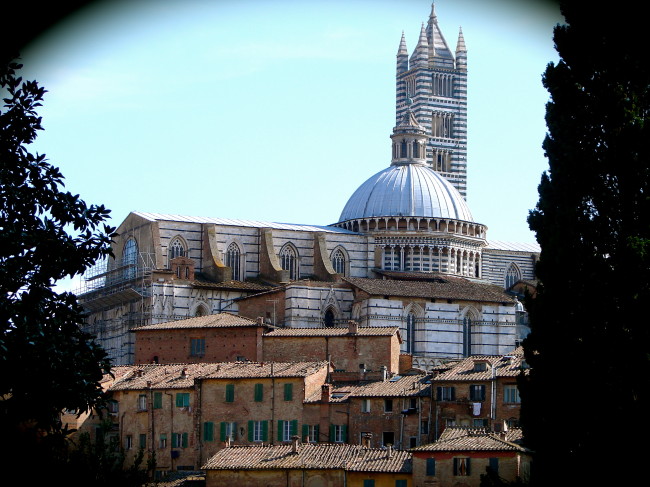 A good crypt experience always puts Tracy in a shopping mood, and this proved no different. Actually, the ceramic plate we bought near the Duomo turned out to be a nice purchase. It is still up in our kitchen. 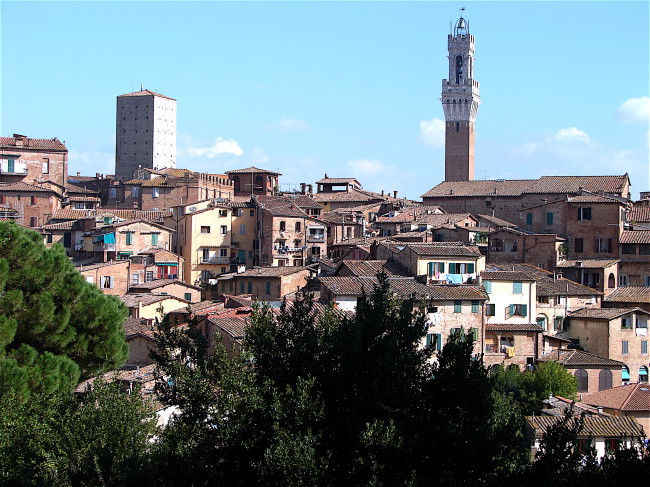 I started thinking about the song “I Ain’t Got NoBody” and so we all walked over to the San Domenico monastery so we could see the place where they keep St. Catherine’s head (photo courtesy of Cathlic Travel guide). 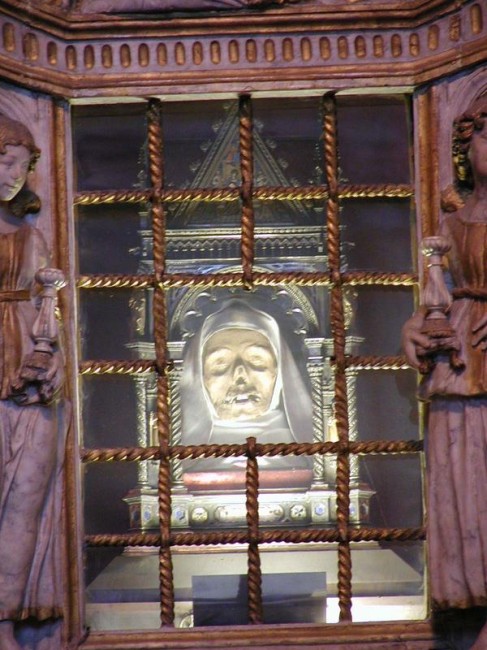 After our visit, while I was still thinking it’s a little creepy to keep someone’s long dead, yet venerated, head for people to look at, my traveling companions were thinking about feet … their own feet, not St. Catherine’s.

A few times during the day, while walking on the Piazza del Campo, I had stopped by the Palazzo Pubblico to see how long a wait it was to walk up the 503 steps to the top. Fortunately for the others, the line was always long. 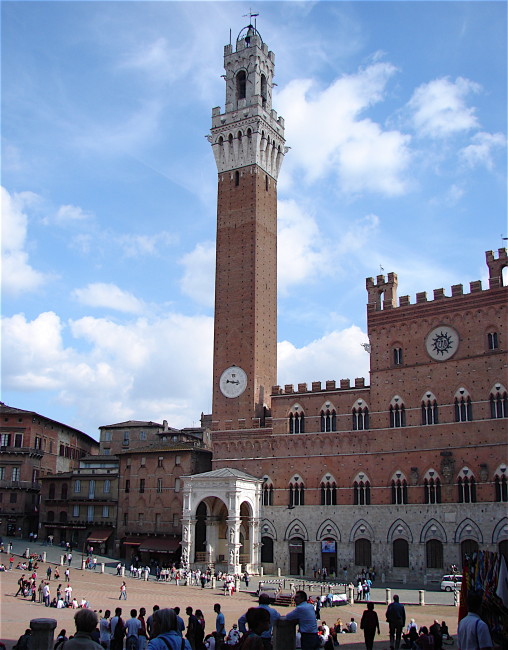 I decided I wanted one more opportunity to make this trek, and Kim and Mary felt their feet would take a vacation from this journey. 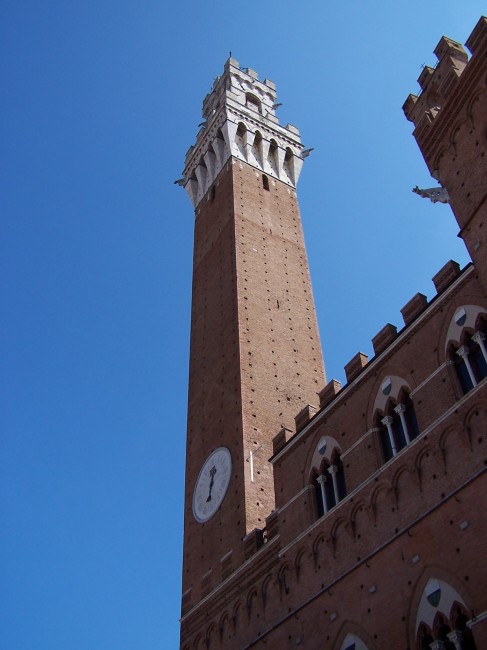 Always the trouper, Tracy said she would walk over there with me, although I knew she was hoping for just one more long line. 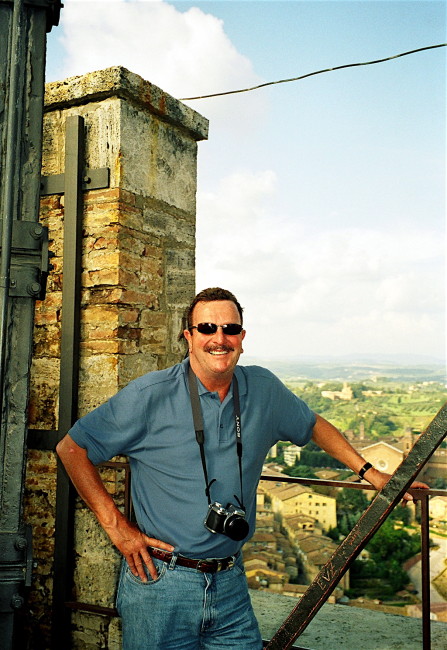 By a stroke of luck (mine), there was incredibly no one in line, so up we went. 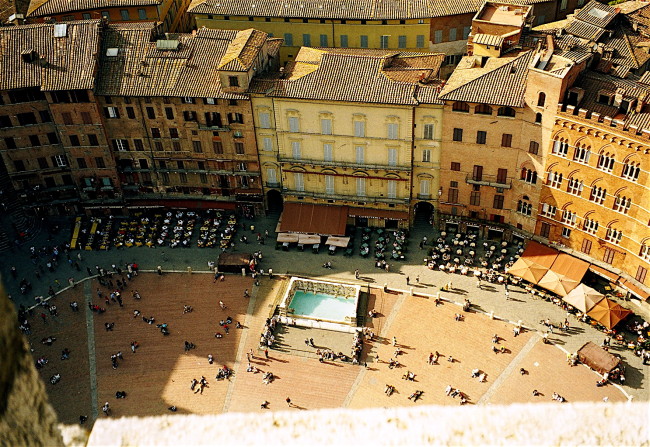 This is definitely a good (well, that might be a contradiction in terms) trudge up to the top, not for those with vertigo, a weak heart (or smart brains), but the views of the Campo, rooftops and countryside made it quite worthwhile. 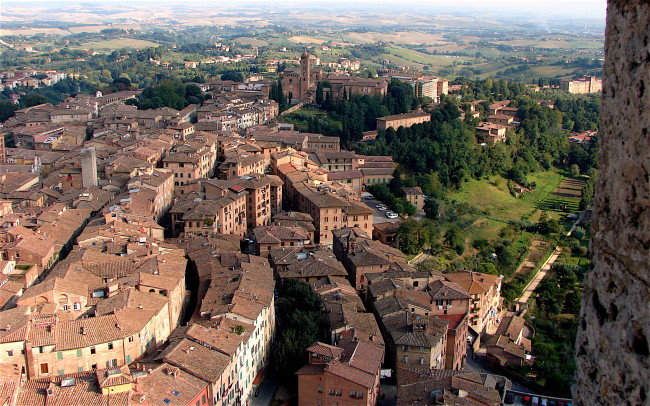 Fortunately for me, there were plenty of people at the top, so Tracy could not fulfill her dream of pushing me over the edge. Looking down at the Campo from here is really a vertiginous experience. 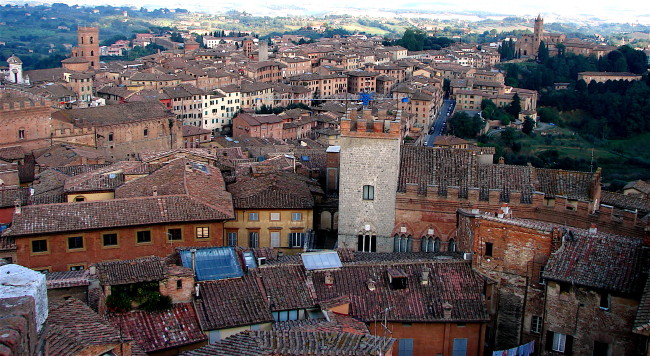 When we got back to the bottom, there once again was a long line, and Tracy said, “Where were those damn people an hour ago?”  I love it when she talks dirty. 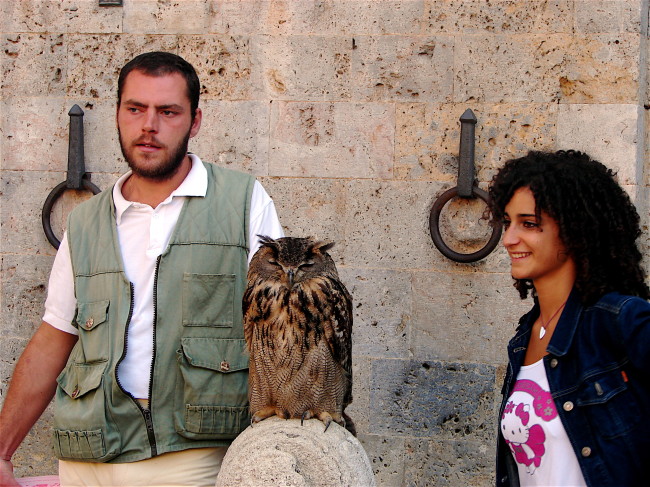 We walked by a couple who had an owl out on the Campo, and some of the people from yesterday were posing for a photo op in the center.  Seems there’s always something happening in Siena.  I’m glad we returned. 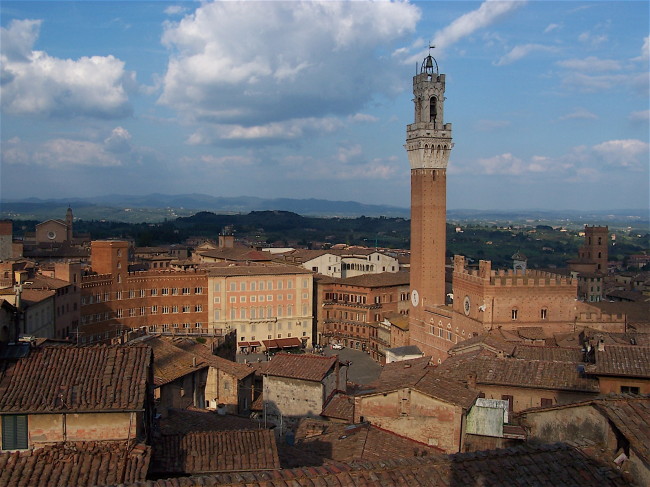 Back at the hotel, we relaxed with Kim and Mary and a bottle of vino overlooking the gorgeous countryside before our feast yet to come that evening at Cane E Gatto, where we had 8 p.m. reservations. 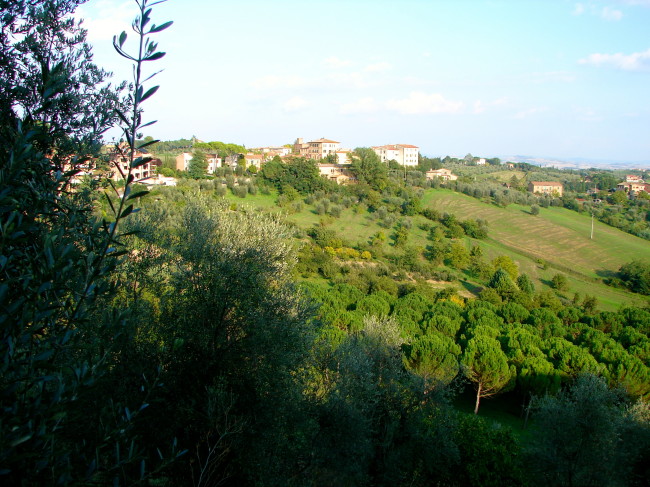 We arrived at the restaurant a little before 8 p.m., and since no one else was hanging outside, we walked around a bit, so not to be the first ones to enter.

The restaurant is intimate (we counted 11 tables), and the owner greets you with a complimentary glass of Prosecco. The server for the restaurant is the owner’s daughter, and she was delightful (and cute, not that I noticed).  Tracy was given a green and burgundy orchid (to wear, not to eat), and the feast was about to begin.

First course was an antipasti misto. The blue cheese quiche with mascarpone was incredible, and the pecorino with honey, mozzarella with diced tomato and basil, meloné y salami and crostini with paté of chicken liver was no chopped liver either (well, I guess the paté was).

Next up was a cream of chick pea soup drizzled with olio, croutons and rosemary. Why is soup on vacation always so good? We jotted down a note to make more soup at home.

By now, there were six couples in the restaurant, and that is the way it would stay for the remainder of the evening. Our waitress told us the wines, and we chose one. Another couple asked if they could see a wine list. In one of my favorite lines from the trip, our server answered (very politely), “I am the wine list.” The timing was impeccable.

We then went on to our next course, wide stripes of pasta with a wild boar sauce. I think it was at this point in the meal I had to loosen a belt loop. Fortunately, they gave you a reasonable amount of time in between courses so you don’t explode at your table.

There was no stopping the gravy train now, and next was a course of grilled beef with truffles and porcini mushrooms, along with the only dish I could have done without, quail with green peppercorns in an orange sauce (tiny little bones kind of got in the way of any enjoyment of that dish).

Looking back, when the quail came in view it was fortunate for all of us that Dick Cheney was not in the vicinity. Tracy loved the grilled eggplant/zucchini/artichoke dish with her favorite (arugula), while I decided to save myself for dessert. I’m glad I did.

The strawberries in a semi-frozen meringue were out of this world and, although I am not a tiramisu guy, this was the best I had ever tasted, served with little chocolate shavings.

The sliced fruit (pineapple, kiwi, orange and gooseberries) was incredibly fresh. We washed it all down with a Moscadello de Montalcino. The entire bill, including two bottles of wine came to about 190 Euros.

At the end of the meal, as people were starting to leave, we struck up a conversation with a couple (he was from Boston, and I was in need of another baseball fix). As we chatted, I casually asked how they knew about this restaurant. She said, “Oh, I am on a travel board.” I had told her I had read about the restaurant on travel boards, also.

Tracy and I waddled back to the hotel at about 11:30 p.m. and made a vow that we were going to stop eating so much. It had been a wonderful meal, but I was beginning to feel a little overweight. Tomorrow would start a day of moderation in our food intake, we thought.

Little did we know, that within 14 hours, we would have a meal that would even surpass this one for food, ambiance and experience. Even better, it would only be 1/3 the price! God bless Italy!

Next: Day Twelve – A Close Call, Lunch For The Ages, The Great Danes, The “Undiscovered” Hill Town And Catching Some Late Afternoon Rays