It’s All In The Tomato Topping 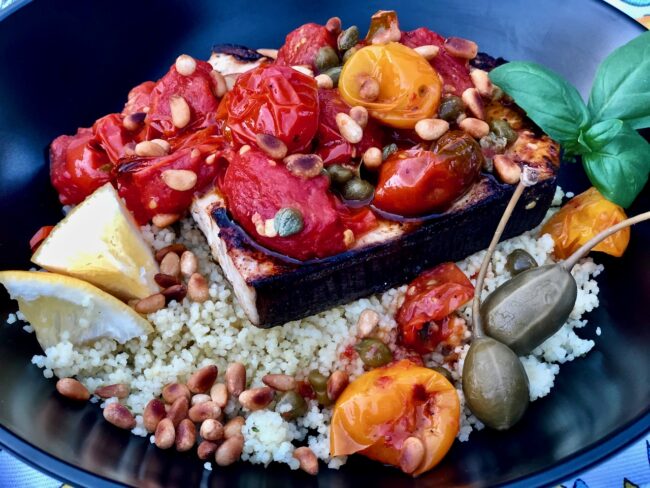 If you made my late stepfather Mr. C’s Creamy Coleslaw (and hopefully liked it!), then you have a big bottle of Bernstein’s Italian Dressing and Marinade left over. If you were Mr. C, you would use it to marinate and grill fish. Tom and I are not big seafood people, but we do like swordfish, as it is meaty and not so fishy.

While browsing Weber’s Ultimate Grilling cookbook by Jamie Purviance I came across a recipe for Swordfish and Blistered Tomatoes. That sounded good, especially as we have been on a tomato kick of late. I usually plant a bush of Sweet 100s, but this year I didn’t have a spot available, so we have been picking up cherry tomatoes every time we go to the market.

This is a quick and simple marinade using Bernstein’s Italian as the base and adding fresh squeezed lemon and zest.  A liberal sprinkling of lemon pepper and salt on the swordfish makes for a delicious meal.  After marinating the fish, pour the leftover marinade over the tomatoes and grill in a cast-iron skillet until the tomatoes shrivel and burst. Add the capers and seasonings and continue to cook while you grill the fish.

(If you don’t have the Bernstein’s use Jamie Purviance’s recipe of olive oil, lemon, and garlic for the marinade.)

I like to serve the fish over couscous or polenta and finish the tomatoes with toasted pine nuts. Delicious! 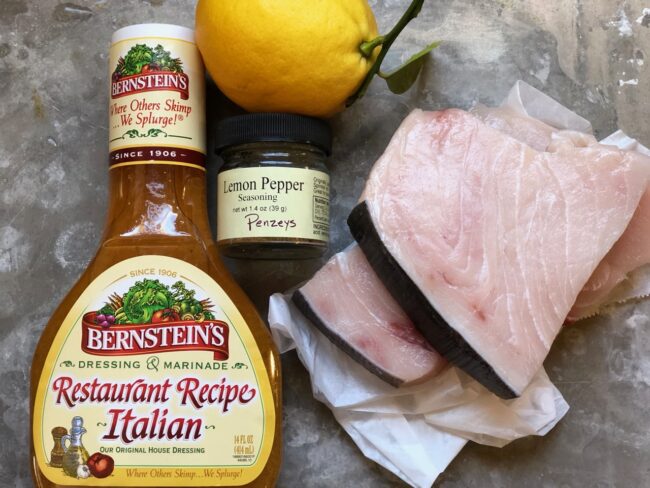 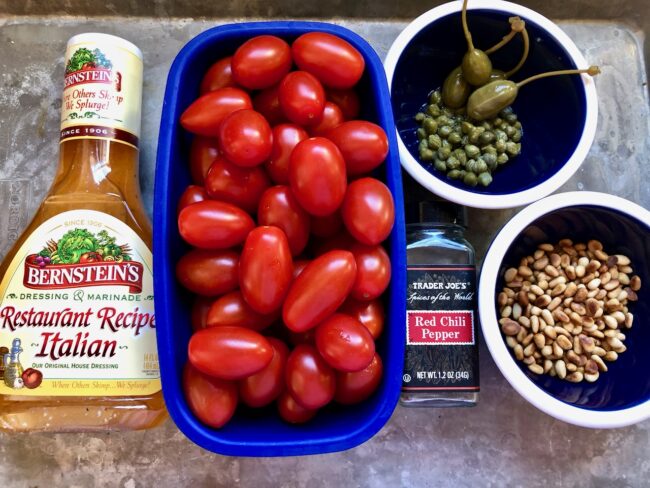 In a shallow baking dish, combine the dressing, lemon zest, and two tablespoons of lemon juice. Add the steaks and turn to coat. Sprinkle liberally with lemon pepper and ¼ teaspoon salt on each side. Allow marinating 15 to 30 minutes before grilling. 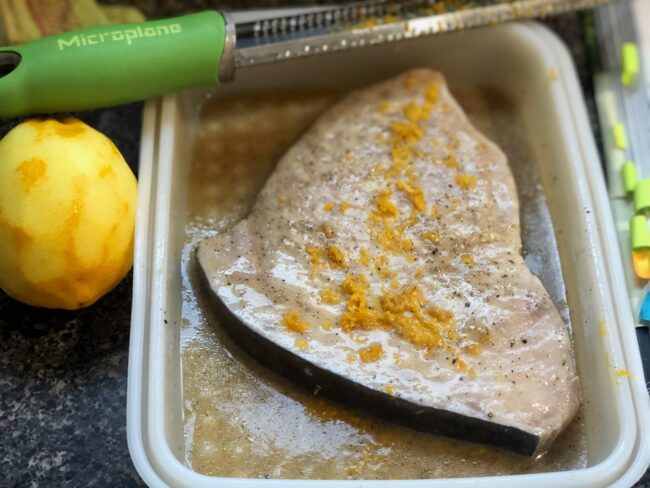 Prepare your grill for direct and indirect medium-high heat (450°F).  Place a 12-inch cast-iron skillet over indirect heat while the grill is heating with the lid closed, about ten minutes.

Remove the swordfish from the marinade and set aside (don’t throw marinade away).  Once the grill and skillet are ready, add the tomatoes and marinade to the skillet, stir to combine, and cook over indirect heat with the lid closed for 10 to 15 minutes until the tomatoes shrivel and begin to burst.  Now add the capers, salt, and red pepper flakes.  Stir to combine. 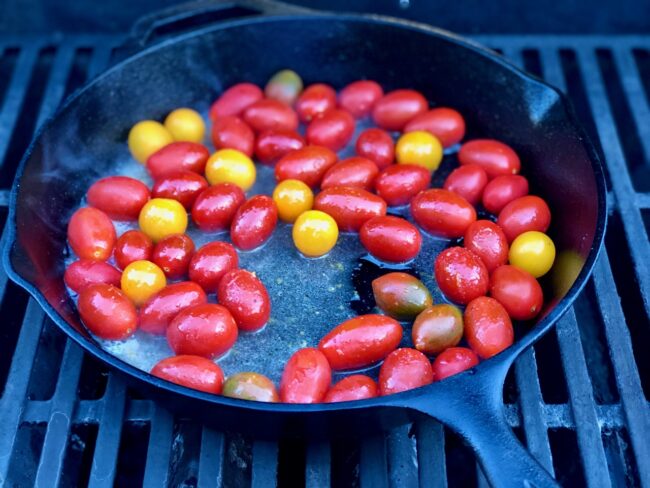 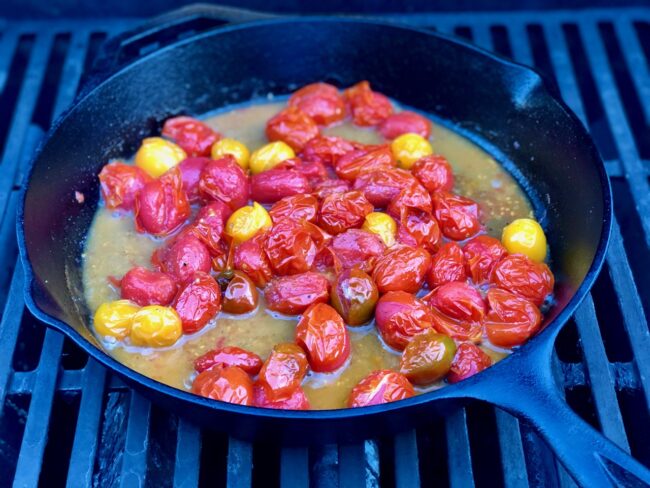 After adding the capers, while the tomatoes are cooking, grill the swordfish over direct medium heat with the lid closed, 8 to 10 minutes, turning once. The flesh should be opaque in the center but still moist; be careful as the fish can dry out quickly.

Spoon the tomatoes and sauce over the fish to serve. Garnish with toasted pine nuts and a squeeze of fresh lemon juice. 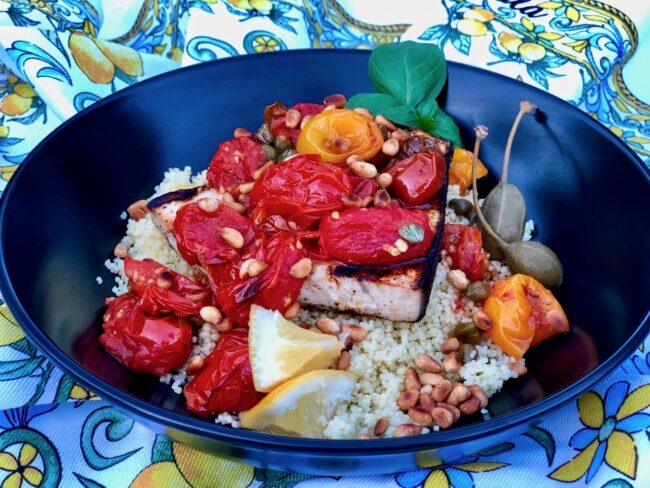 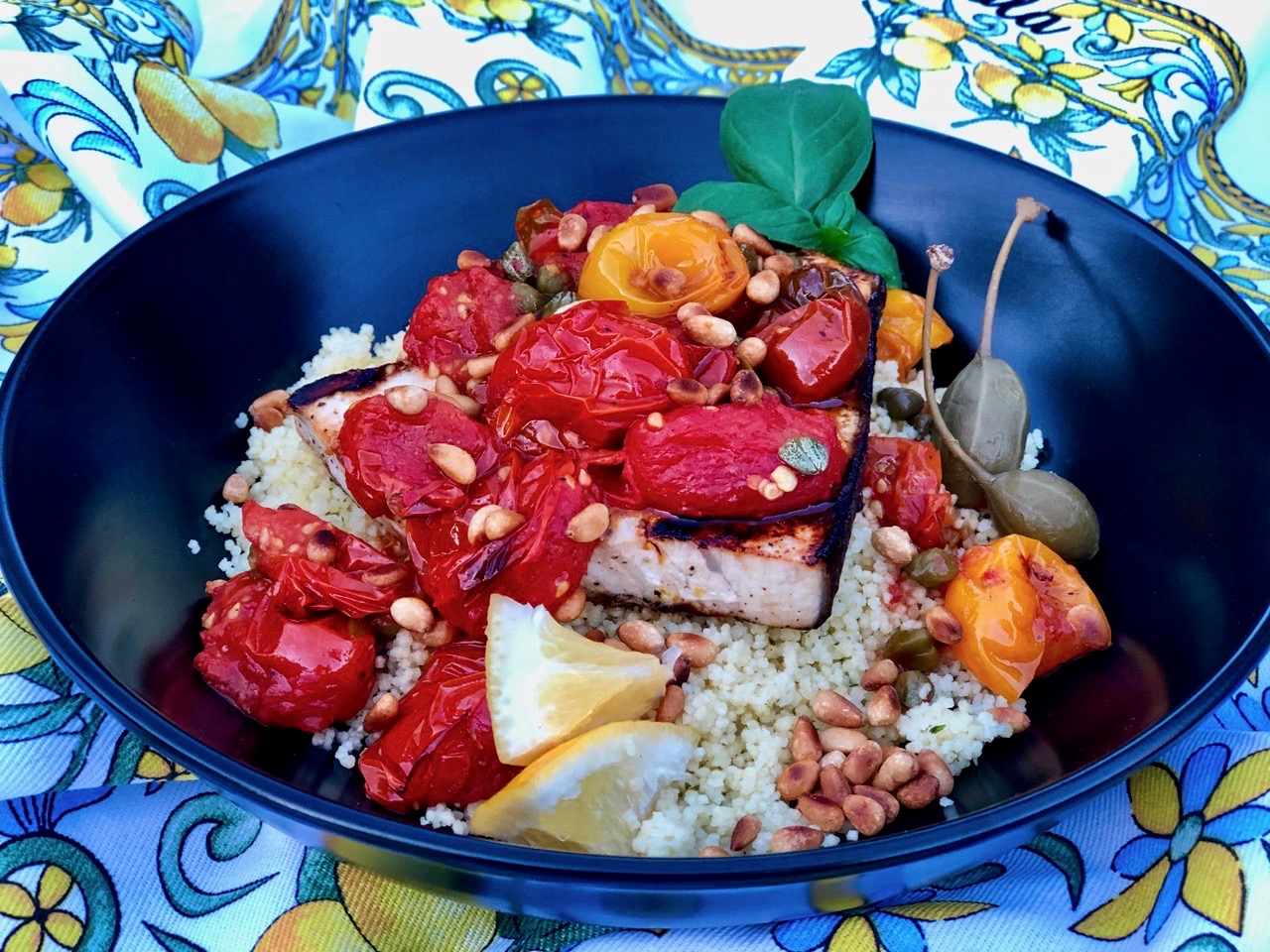