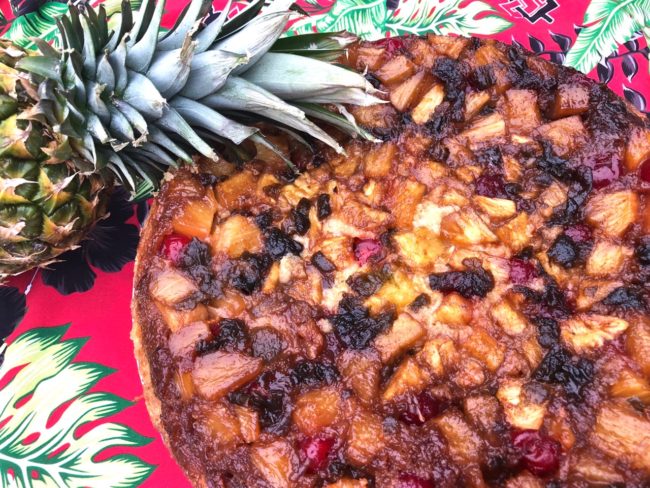 As Hatch chile season drew to a close, my mind was humming on how to use the Melissa’s Extra Hot Chiles we had grilled for the Hatch Chile Butterscotch Blondies. 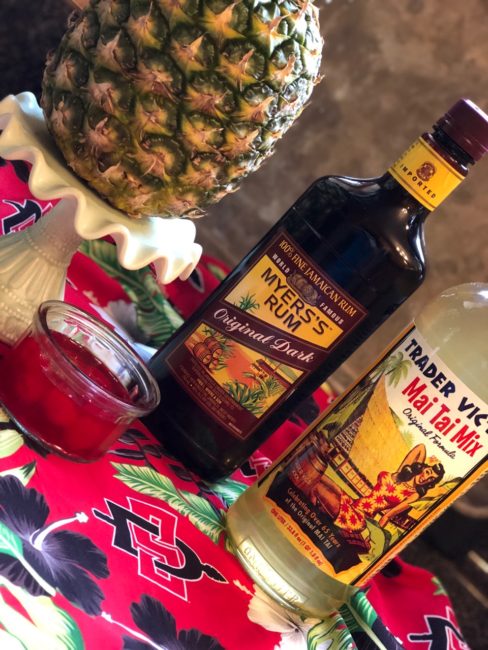 We made some Hatch Chile hamburgers for dinner one night and when I opened a jar of my Caramelized Pineapple & Ghost Pepper Salsa, a pineapple upside-down cake popped into my mind.  Caramelized Hatch chiles and pineapple?  You bet!  I have not had Pineapple upside-down cake since I was probably in kindergarten.  My mom used to make it in a cast iron skillet.  I whipped one up, but it was kind of bland.  The cake just wasn’t talking to me.  I then thought about the Baba au Rhum cake we’ve had in Paris.  Your server brings you different bottles of rum, and you can pour on however much you would like.  That’s the ticket!  This cake needs rum, fresh pineapple, maraschino cherries, and some orange zest, sounds like a Mai Tai!!

I used canned unsweetened pineapple on my first attempt, but it had no flavor.  Fortunately, there was fresh pineapple available which makes a difference.  You can go retro with the pineapple rings or chop it up which is what I ultimately decided on.  I know the maraschino cherries are kitschy, but this is an old school recipe.  You can make the cake in a pan or cast iron skillet.  I think the skillet helps with the caramelization of the butter and sugar.

While I don’t think we would ever put a Hatch chile in a Mai Tai (or maybe we would … Tom?), the heat of the chiles is great with the pineapple.  An Extra Hot Hatch Chile has a Scoville Heat Level of around 8,000, similar to a jalapeño, which is nothing compared to the 1,000,000 Scoville units in the Ghost Peppers I used in a couple of recipes last year.  I, of course, used an Extra Hot but any heat level would work.  Be brave – embrace the heat!

As far as the booze, unless you eat the entire cake yourself, I don’t think this will get you liquored up, not to mention, alcohol mostly cooks off during the baking process (about 25-35% remains), however, if you don’t want to use rum, substitute with pineapple juice.

I made this skillet pineapple upside down cake numerous times over the last couple of weeks and was having a problem with the cake being golden brown on top and soggy in the middle.  I solved this by being sure the pineapple was well drained and patted dry and covering the cake with foil for the last 15 minutes of baking, so it did not get burned on the top.  It took one hour in my oven to bake. 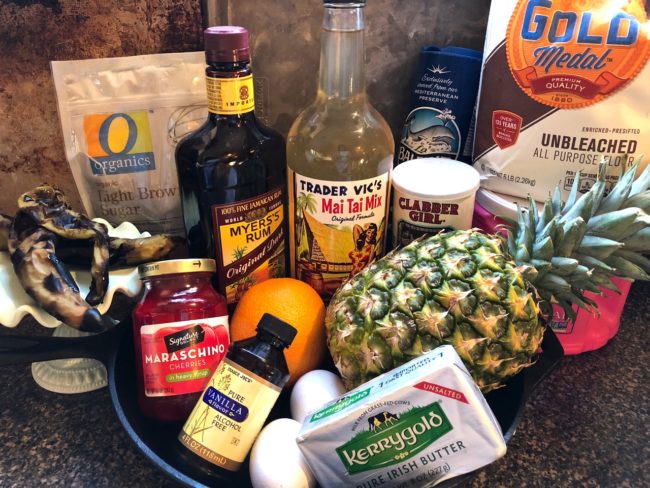 Preheat oven to 350°F.  Let the pineapple drain for at least half an hour in a wire sieve over a bowl, then spread on some paper towels to get as much juice out as possible otherwise your cake is going to be soggy.

In a 10 inch cast iron skillet over medium heat, melt the butter.  Sprinkle the brown sugar over the melted butter.  Do not stir the butter and sugar.  Remove the skillet from heat.  Spoon the pineapple mixture into the bottom of the pan and top with the maraschino cherries. 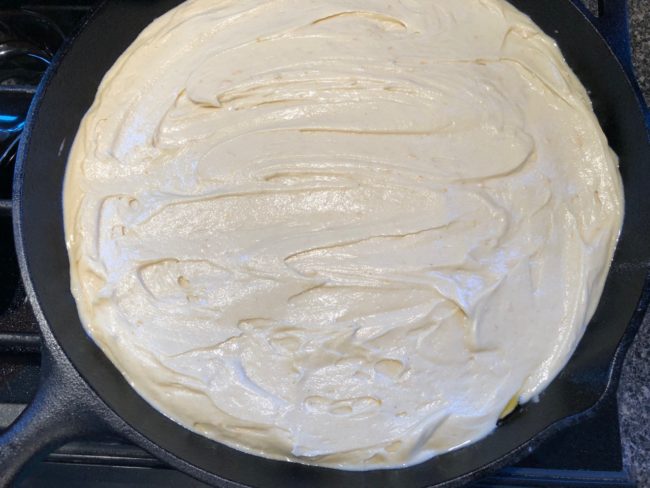 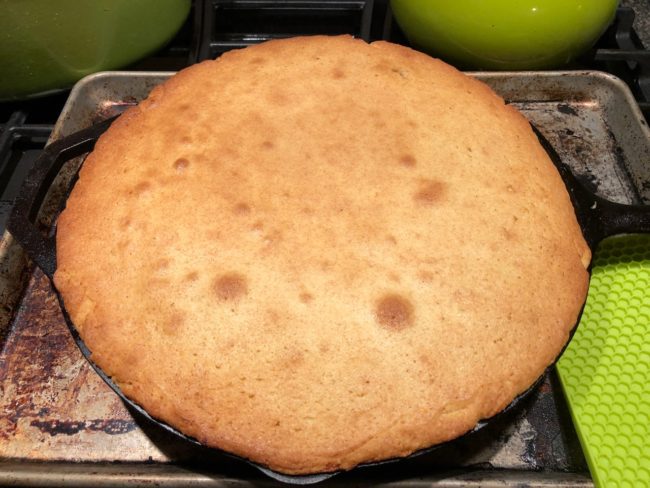 In a small bowl, whisk the flours, baking powder and salt together. 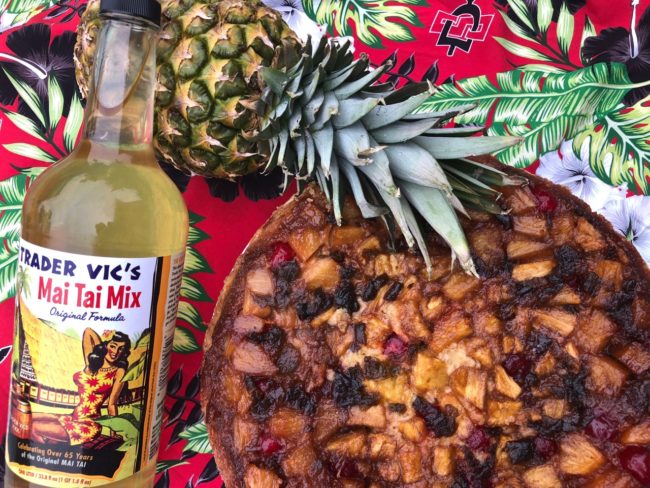 In a separate small bowl or cup, mix the Mai Tai (vanilla, rum, the Mai Tai mix, and orange zest). 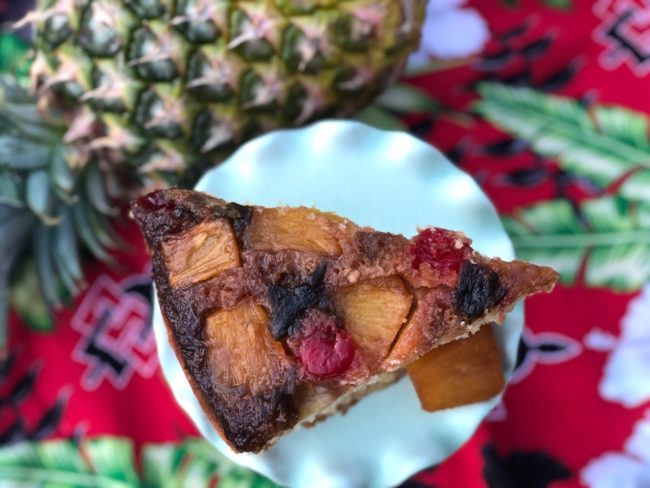 Bake in oven for 45 minutes until golden brown on top, at this point insert a knife in the center to see if it comes out clean.  If it does not, cover the cake with foil and continue baking, checking every 5 minutes to see when the knife inserted in center comes out clean.  My cake took 1 hour to bake.  Cool in pan on a wire rack for 15 minutes.  Carefully invert onto a cake plate and serve warm or at room temperature. 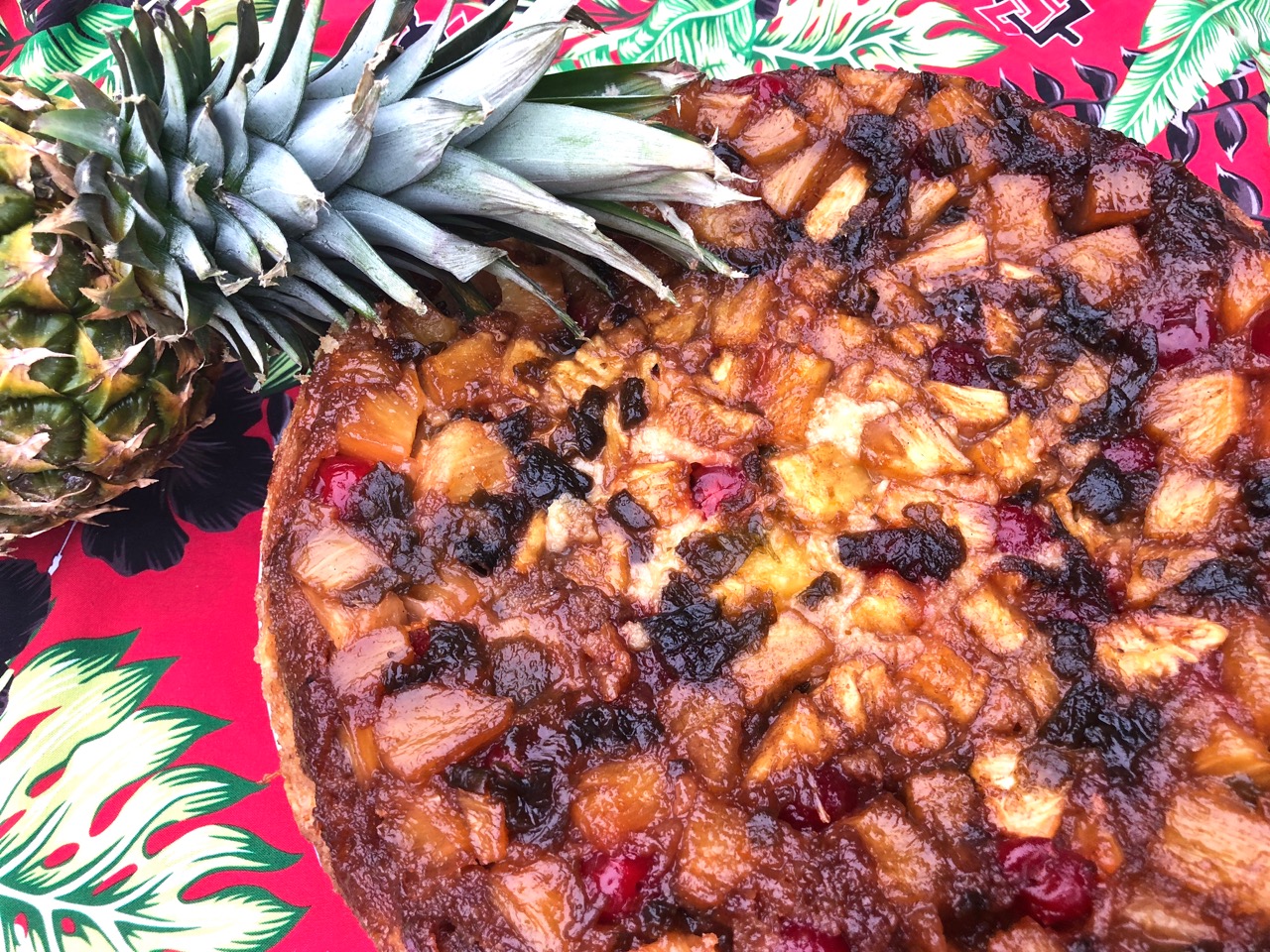