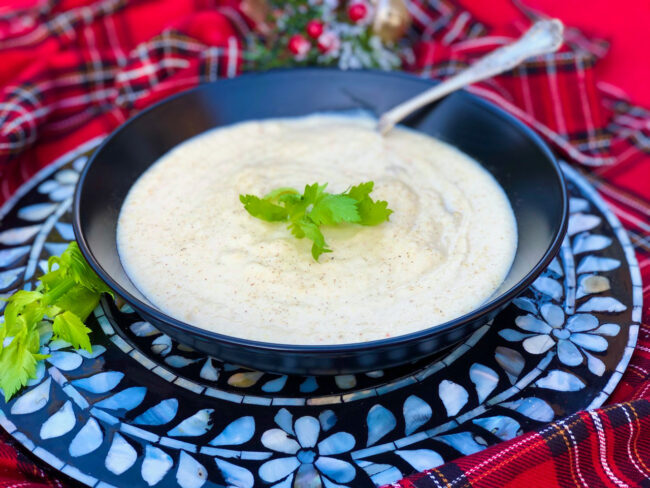 After a whirlwind 2019 trip to Montreal and Quebec City (Tom is finally back at the computer after knee replacement surgery and will resume the trip report this week), where a chilly autumn had arrived early (33°F in the mornings in Quebec, brrrr!), we were in the mood for soup. 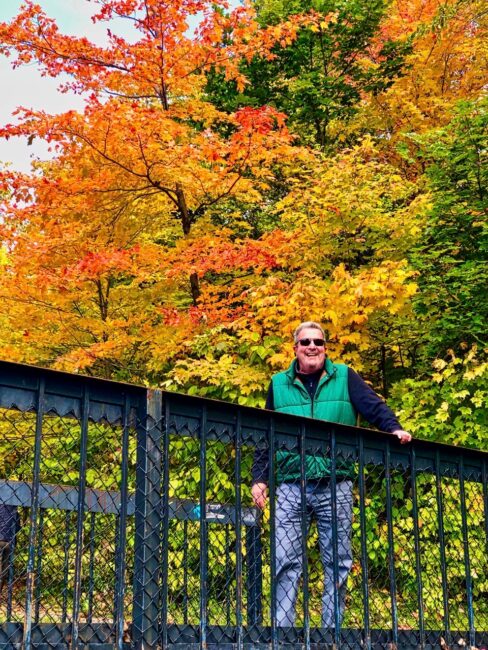 Besides enjoying the brilliant red leaves of the Sugar Maple trees and the crisp (who am I kidding, it was COLD) weather, we ate lots of delicious soups.  From a sublime cream of celery and fennel soup to a deconstructed French onion soup (called Cappuccino onion soup as it is topped with an emulsified foam instead of cheese), these soups not only were satisfying but also helped keep us warm.

One of these soups inspired me to try a recipe for Cream of Celery Root Soup from La Vie Rustic: Cooking and Living in the French Style by James Beard award-winning author, Georgeanne Brennan. 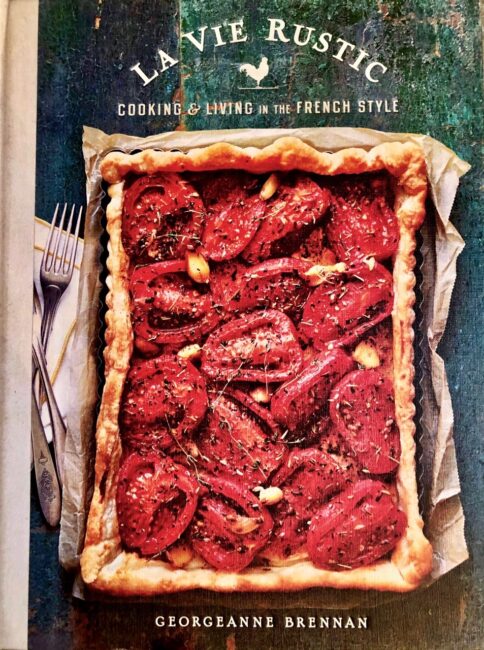 What initially drew me to this cookbook were the gorgeous photos.  (I’m a sucker for food photos!  I won’t even buy a cookbook without pictures … I want to SEE what I am making before I go to the effort.)  The photography is impressive, and this could almost be considered a coffee table book.

Cream of Celery Root is the first recipe I have made from the book, and I only made a few minor changes, the biggest of which was to add fennel, as we seem to be on a fennel kick lately here at the Casa de MaiTai Tom and Tracy.

If you haven’t cooked with celery root before, Fine Cooking had a quick tutorial on peeling celery root in the most recent issue.  Basically, you trim off the stems and then slice the top and bottom to create a level surface on both ends of the root.  Using a chef’s knife, thinly slice off the exterior following the curve of the root.  Use a vegetable peeler to remove any of the remaining skin. 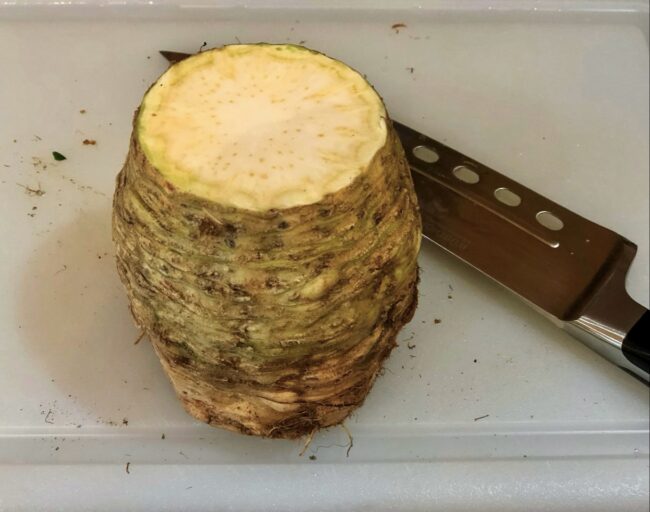 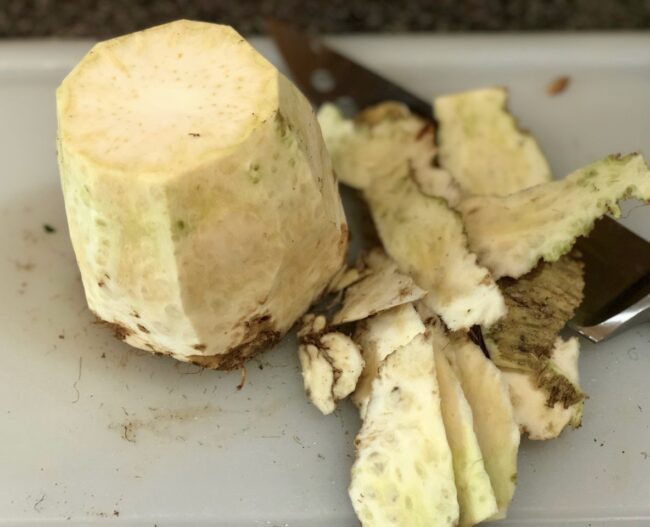 I garnished this dish with some celery leaves, but feel free to go crazy with cooked prosciutto (my fav!), toasted pecans, or fried leeks.

Celery root, celery, leeks, and fennel with a touch of cream.  What a simple, elegant soup.  I was tempted to leave out the cream, but we tasted it both ways, and the cream elevates this from a Yum! to a velvety Wow! soup.

Serve this on a cold autumn or winter day or as a starter for a holiday dinner party.  Winter, here we come! 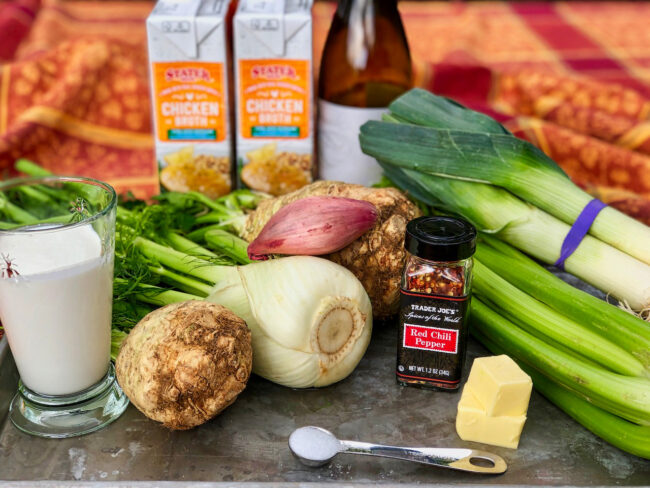 In a Dutch oven or stockpot, melt the butter over medium heat.  When it foams, add the vegetables and cook, occasionally stirring, until the leeks and shallot are translucent, about 2 minutes.  Sprinkle with the salt and red pepper flakes and stir.  Add the wine, raising the heat to medium-high, and bringing to a boil.  Continue to boil until most of the wine has evaporated, about 5 minutes.  Add the broth and return to a boil, reduce heat to medium-low, cover and simmer until the celery root is soft and easily pierced with a fork, 15-20 minutes.  Remove from heat. 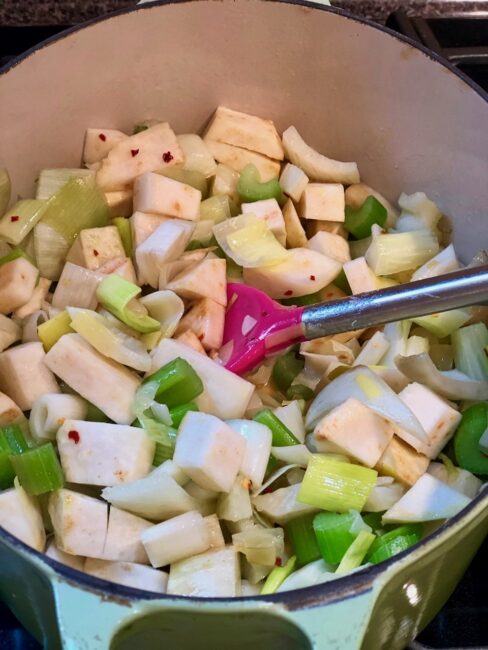 Using an immersion blender, puree the soup until smooth.  Stir in the cream.  Bring to a simmer over medium-low heat and cook until the soup has a creamy consistency, about 5 minutes. Season the soup to taste with kosher salt and white pepper. 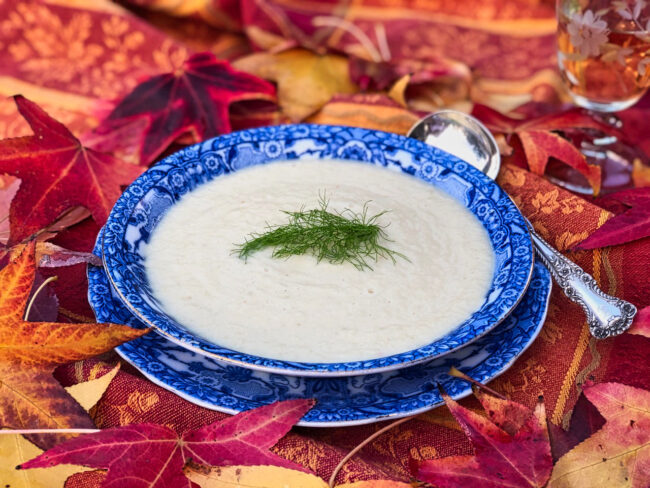 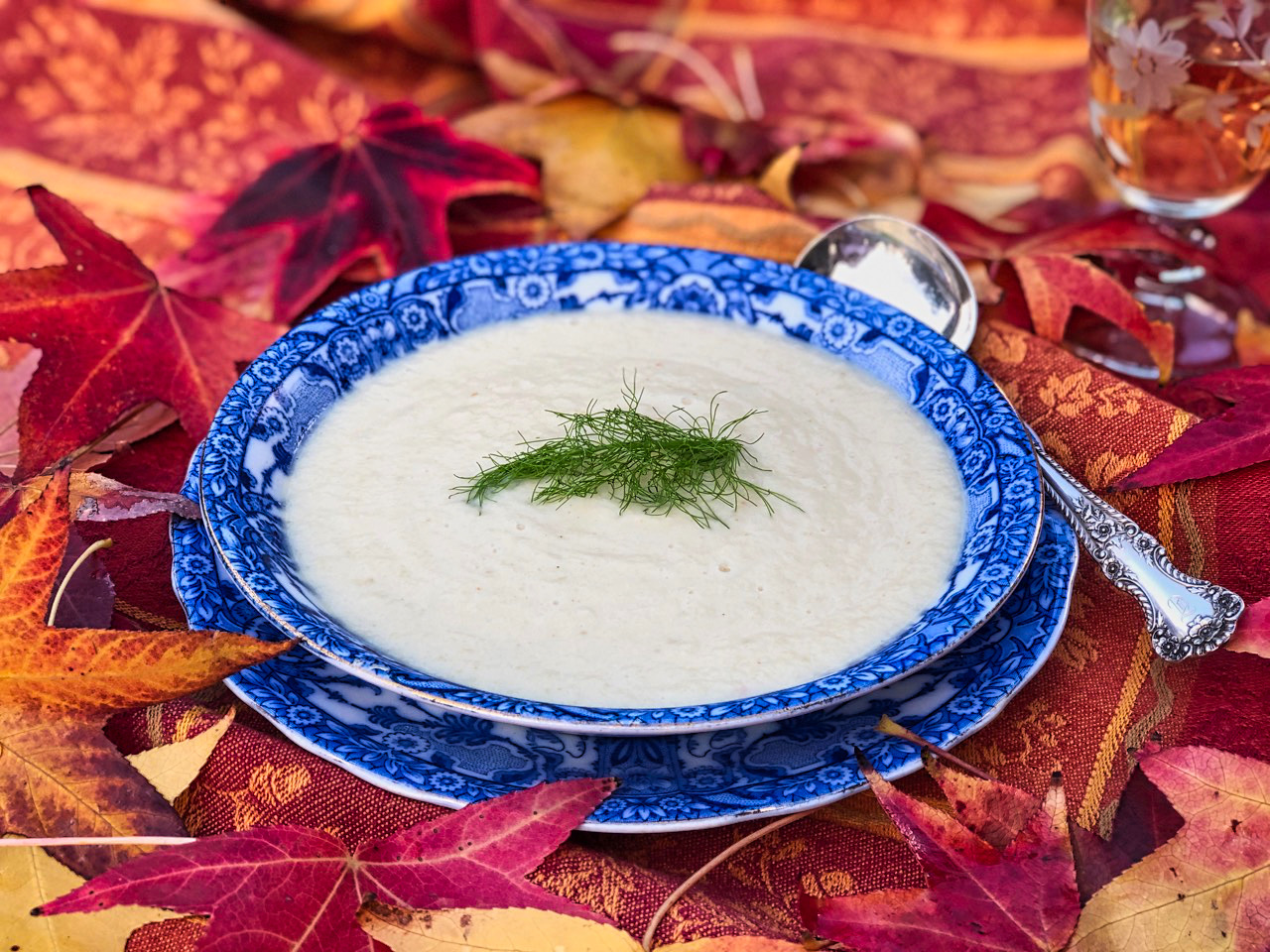