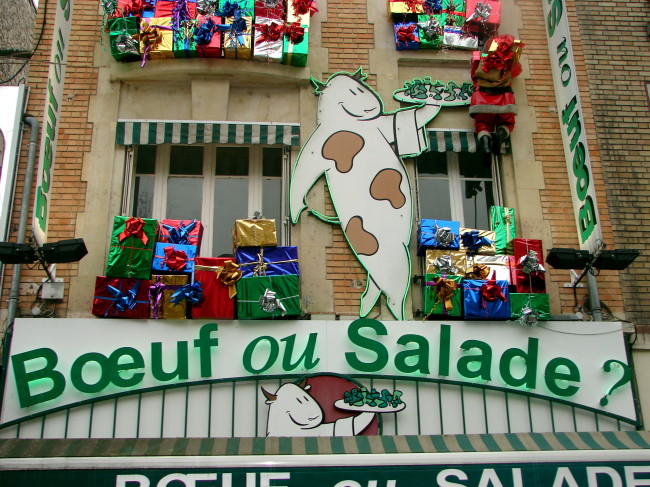 Chapter Three: A Taste Of Champagne

Day Four: Citizen Cane, The Train To Champagne Then Quiche Lorraine, Reims Time, Unbutton Your Damn Coat, I Surrender, City Lights And The Apple(s) Of My Eye

Tracy and I were up early, because we were going to take a little day trip to the Champagne region (Reims). 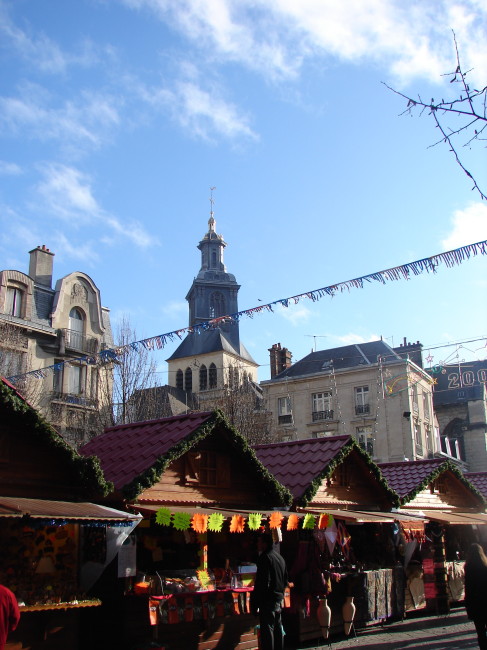 We walked the short distance to our metro stop:

DIGRESSION: I had read (I think on Trip Advisor) that there was not a metro stop convenient to the Hotel de Varenne.  If I remember correctly, the poster said it was at least a ten-minute walk. Tracy and I had walked to the metro stop (although couldn’t go because of my bum knee) a couple of days before, and even Mr. Gimpo here could navigate the walk in less than five minutes.

When two very sleepy tourists (us) got to the top of the stairs leading down to the metro, I wanted to take a quick look at the convenient metro map for the best way to get to Gare de l’Est, where we would take the train to Reims. “This should only take a second,” I told her.

Tracy and I were standing right next to each other when, suddenly, we were accosted (well, that was my first inclination) by an unknown assailant. We felt a body crash into us, put his arms around us and grope us. “Aha,” I thought. “My first-ever time being pick pocketed.”

In a flash, I was able to remember all my martial arts training (which consisted of watching a Bruce Lee movie for about ten minutes). Using my new-found strength in my right knee, I pivoted like an NBA star and flung the attempted thief backward as far as a 54-year-old arthritic guy with a bum knee and no caffeine in his system could fling.

As the scoundrel flew backward at an accelerated pace, I caught my first glimpse of him, and he looked nothing like I thought he would from his initial burst into our serene morning. He was wearing big sunglasses and carrying a cane.  Since it was still dark out, there could only be one observation made, and it wasn’t a pretty one.

Yes, ladies and gentleman, I almost sent a blind man flying onto his keister. The blind man reminded me of blind Mr. Muckle, who wreaked havoc on light bulbs in the classic W.C. Fields’ film, It’s A Gift. 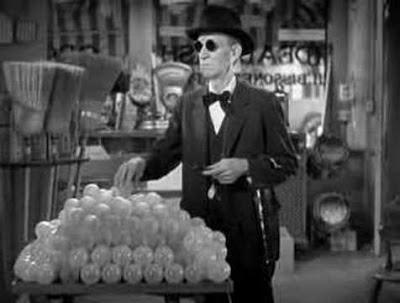 Fortunately, as he stumbled backwards, a couple passing by were able to break his fall. The blind man collected himself, smiled and moved on. Or was he blind?  Yes, he did have sunglasses and carried a cane, but could it have been a devious ruse in order to steal my wallet or our passports?  Fortunately those valuables were hermetically sealed in my front jeans’ pocket covered by my new overcoat, which I bought before I left.

In any event, the entire episode was better than a double espresso in getting our juices flowing, so it was on to Reims, where my overcoat would play another role in the day’s activities.  The train ride to Reims takes less than two hours (much less now in 2015), and for the first time since we arrived, gray skies greeted us as we got off the train. 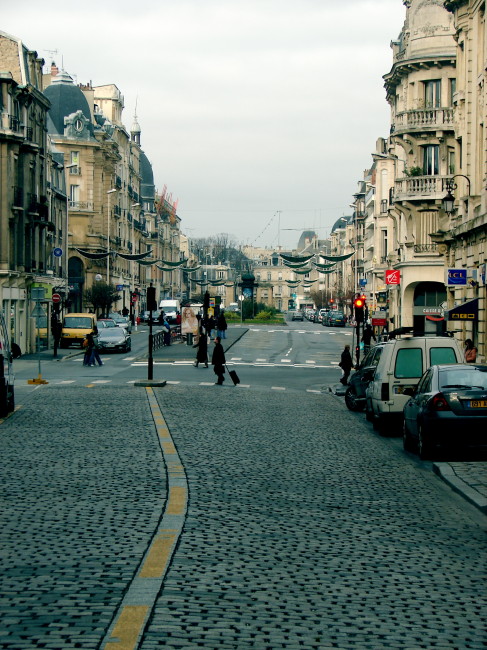 Reims calls itself “The Home Of Champagne,” and is the largest city in the region.  It’s famous for its bubbly, which makes my faux pas later even more troublesome today.  The town played quite an important part in French history, as there have been more than two dozen coronations at its famed cathedral. 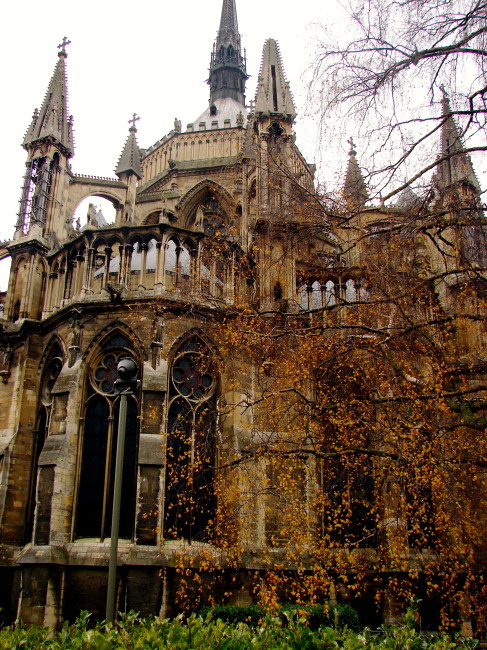 We walked into town, in search of the cathedral. 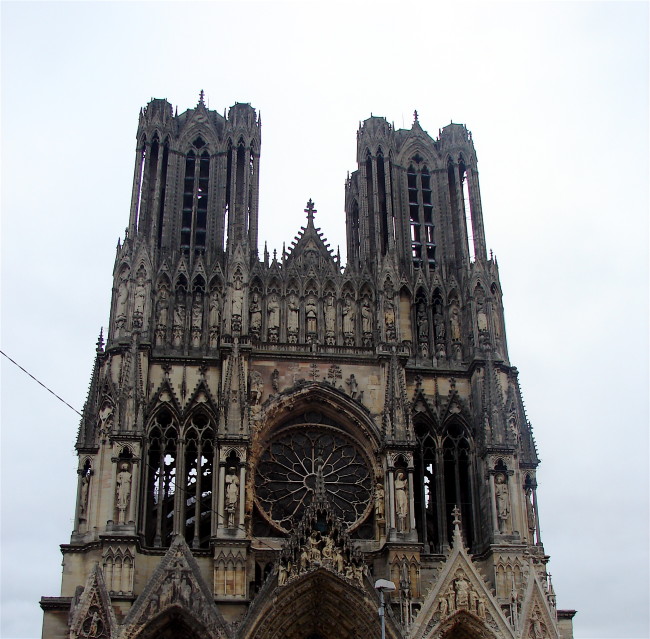 We found the tourist office, bought our audio guide for Cathédrale Notre-Dame de Reims and off we went. 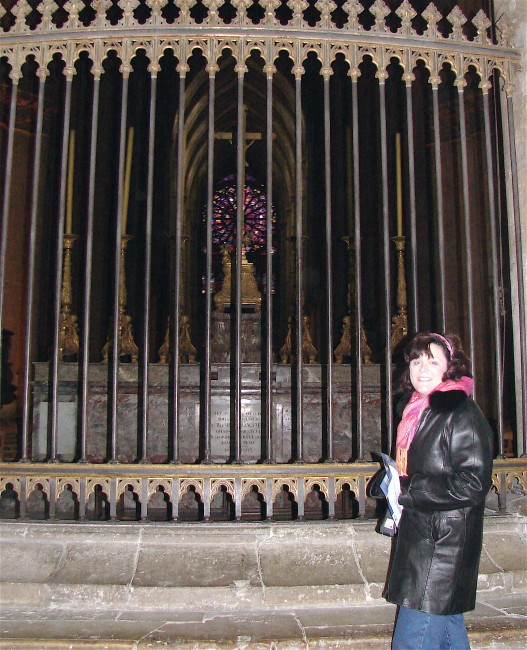 The Cathédrale Notre-Dame de Reims dates from the 13th century and supposedly has a total of more than 23,000 statues (we did not count to verify that tidbit of information). 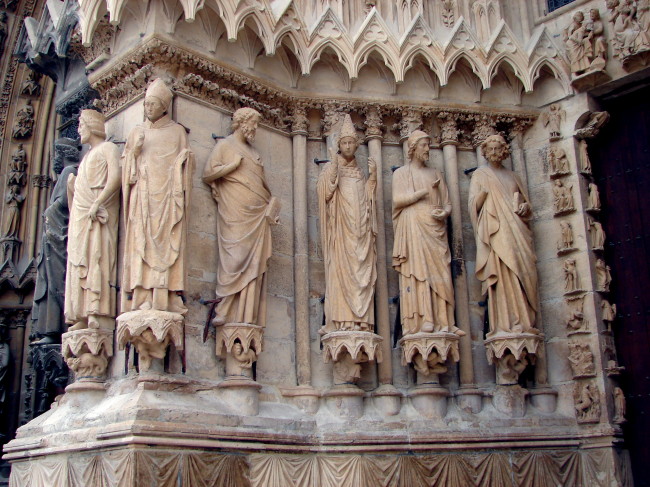 What I remember most about this church was the cool façade (some of the outside has been cleaned, while some still needs a good scrubbing) and the fantastic rose window, which tells the story of the creation. 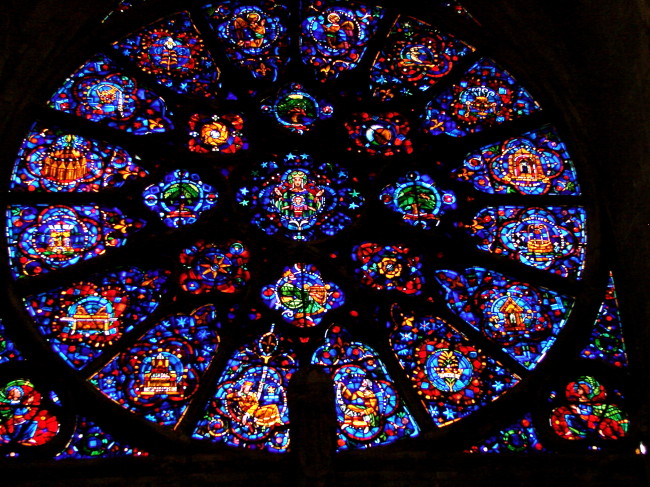 The audio guide tour takes a little more an hour. 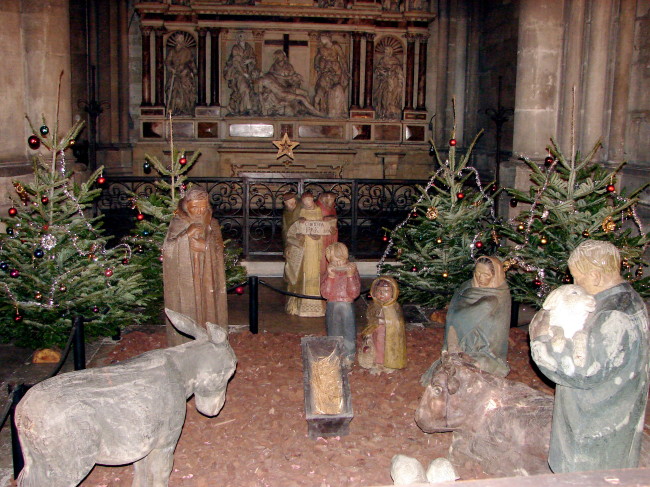 We could have stayed longer. 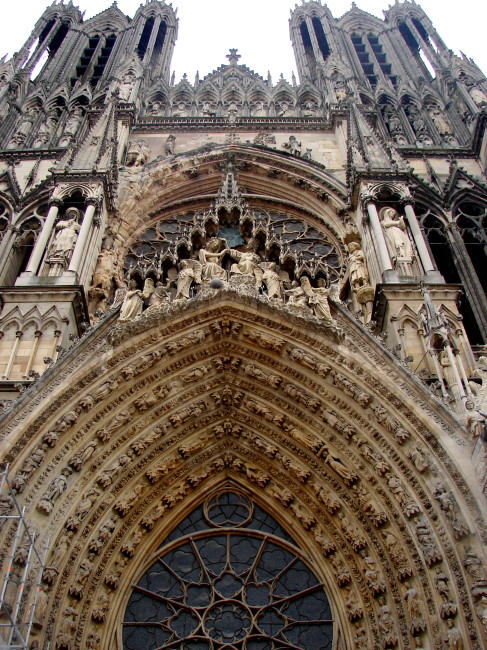 We then stopped in a little store, and Tracy bought some Veuve-Clicquot and very neat champagne cover, which keeps it chilled. As I attempted to pay, my umpteenth wardrobe malfunction was finally too much for Tracy to handle.

DIGRESSION: Living in Southern California, I have never owned an overcoat that goes as far down as my knees. That, of course, is because (until last week), I’ve never needed one here. Knowing that temperatures would be in the upper 20s and low 30s at night in Paris, and that I am a wimpy (except when I’m beating up blind people) Southern Californian, we decided this might be a good time to own one. 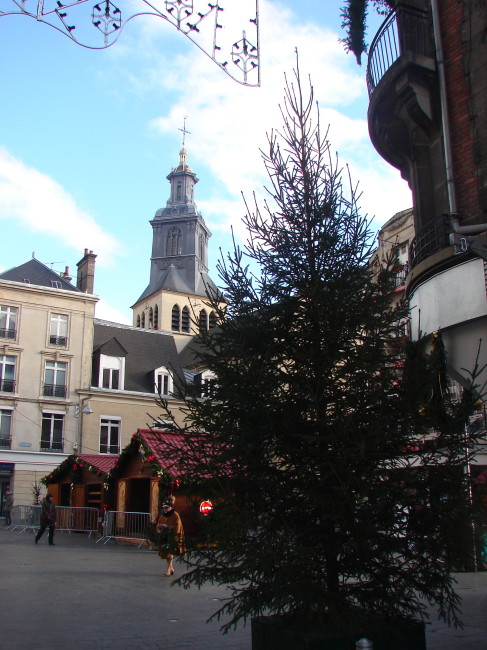 When trying it on at the store, I told Tracy it kind of gave me the look of a secret agent. Tracy can really roll her eyes when she wants to. 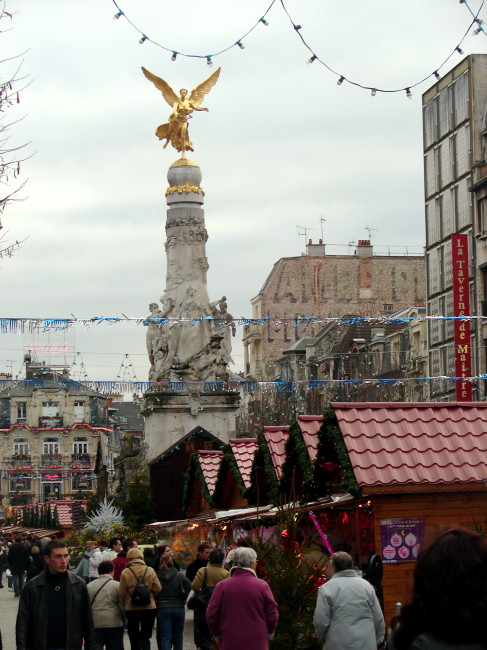 Anyway, back to the wardrobe malfunction. For the past few days, I had my overcoat buttoned down all the way. Whenever, I needed to get money or metro tickets out of my pants pocket, it looked like I was having a stroke as I flailed around trying to unbutton my coat from the bottom, reach in my pockets and grab my wallet. It looked like I was doing a bad Steve Martin “Wild and Crazy Guy” impersonation, and Tracy told me I looked like a complete idiot (which, as you know, happens on every trip). 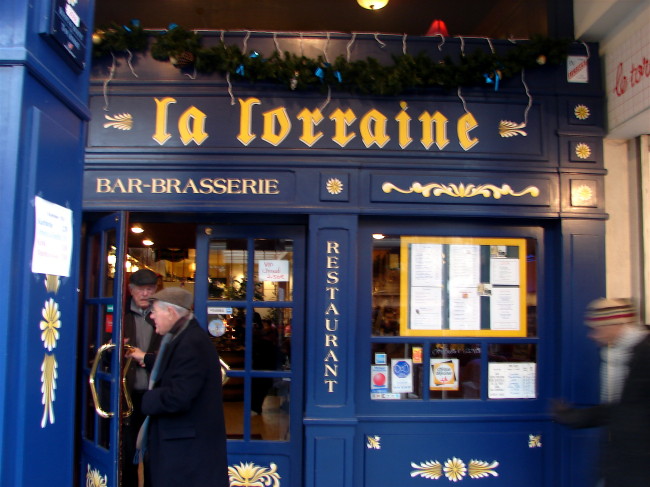 Well, after learning the intricacies of an overcoat, we walked through the Christmas booth maze to La Lorraine, a bar/brasserie that looked cute. 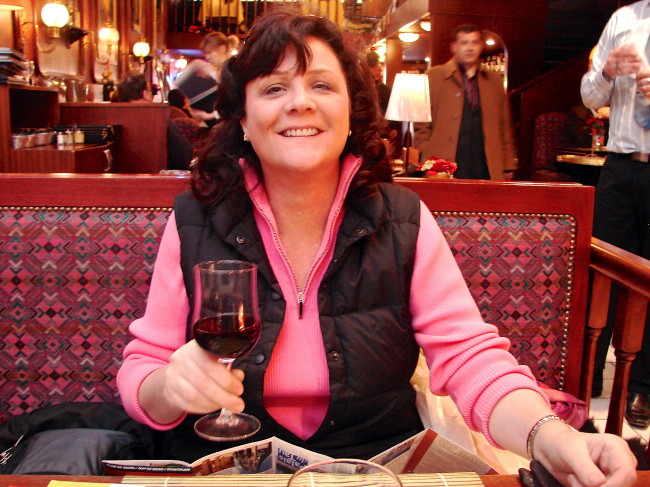 Tracy had the Quiche Lorraine (a natural), while I opted for some onion soup gratinée and my first helping of pommes frites. 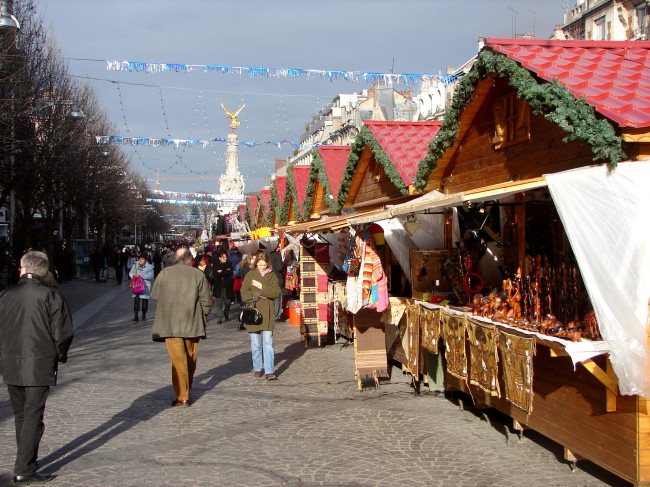 It was then I made my first tour guide error. 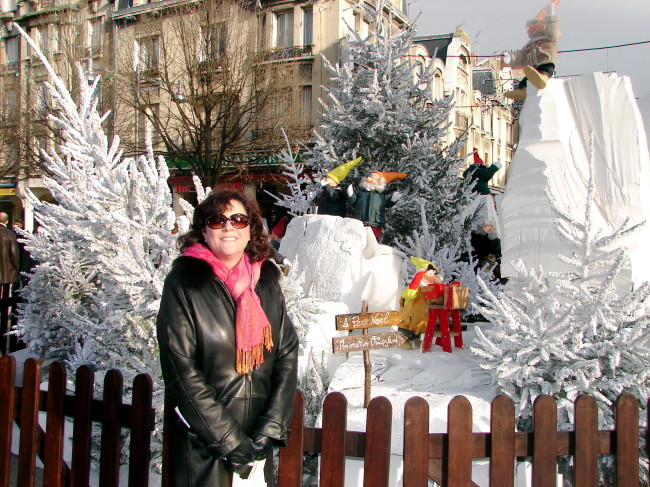 We were going to go to Veuve-Clicquot for a champagne tasting, but it didn’t leave us much time to make the train and get back to Paris. I made the error that we would just walk through town for a bit, then head to the Museum Of The Surrender, and then hit the train station in time for our Paris return. Had I known there was a train an hour later than the one I knew would head back to Paris, I would have gone.  I blame that on my bad knee that precluded me from my last minute plan to scout more of Reims. 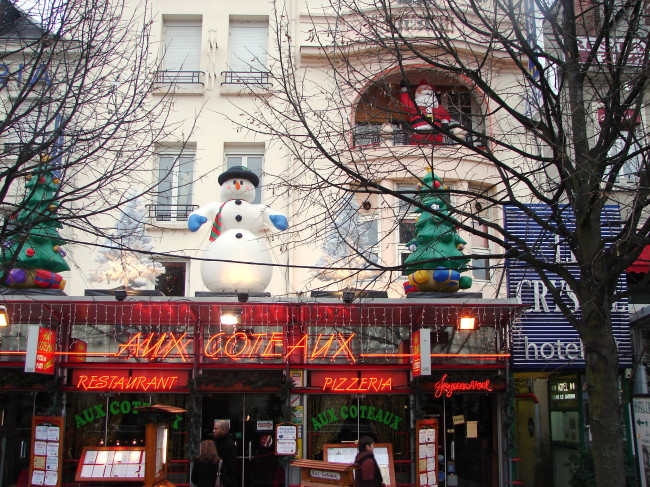 Reims was certainly ready for Christmas.

Oh well, at  least we had champagne for lunch. 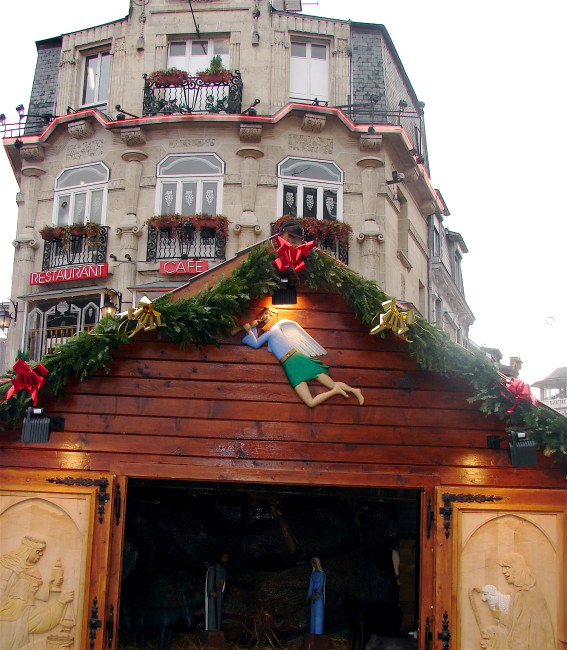 We walked through town (I liked Reims) and detoured behind the train station to the Museum Of The Surrender, which served as Dwight Eisenhower’s headquarters in 1945 and where the Germans signed (one of) the surrender papers. Tracy and I were the only visitors.

I like reading about World War II, so I thought this was mildly interesting, since the rooms have been left just like it was back in 1945. If you have some extra time, I would recommend it. It still looks like they are trying to add some things to make it more interesting.  There is also a short film, and since there was no one else in the museum, for once I didn’t have to yell at anybody for talking through the movie (photo of museum is from GoFrance.com). 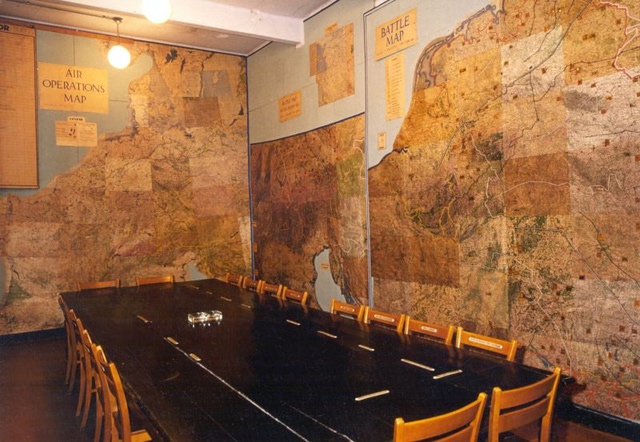 The train ride home was much shorter, because we both fell asleep. Thankfully Paris is the last stop or we might still be on it.  We got back to the hotel and quickly showered, because we had 8:30 reservations at a restaurant that had Tracy concerned. 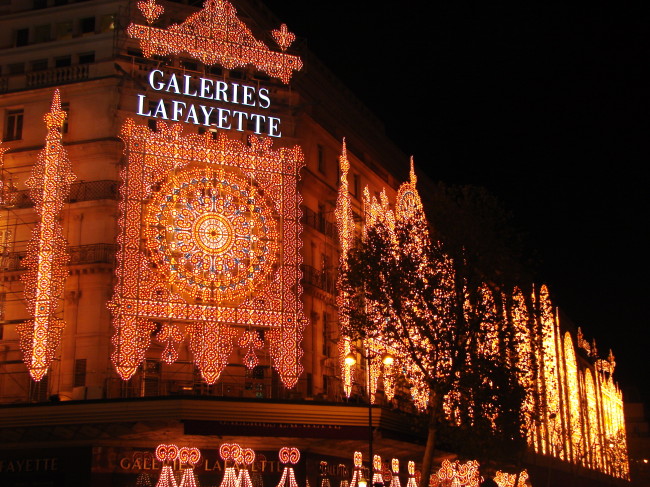 But before we ate, we took the metro to see two department stores that we were told would be fun to see during the Christmas season, Printemps and Galeries Lafayette. 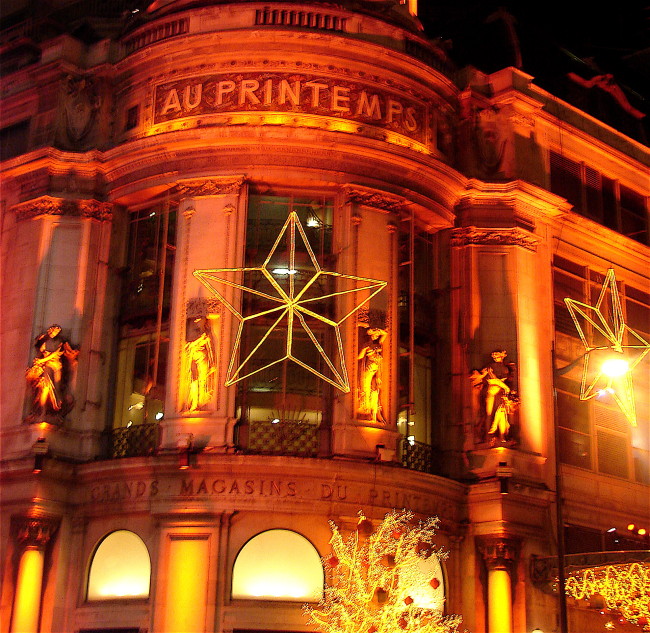 Both had some pretty amazing decorations, and they were open late this Thursday. 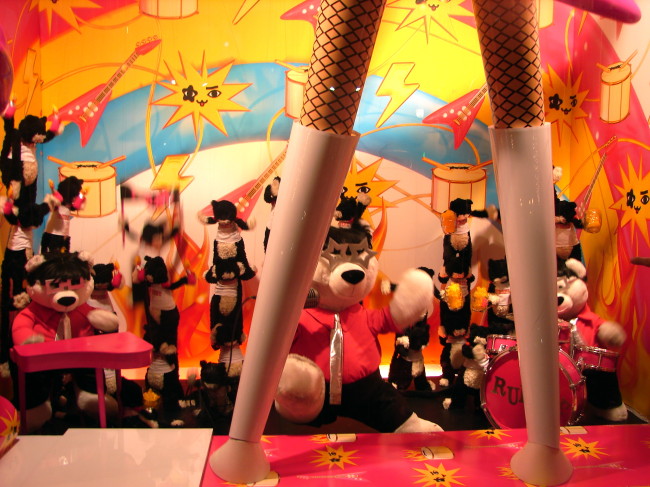 It was only a few days until Christmas and it was fun to see people scurrying and worrying about buying last minute presents and, for once, knowing I didn’t have to be one of them. 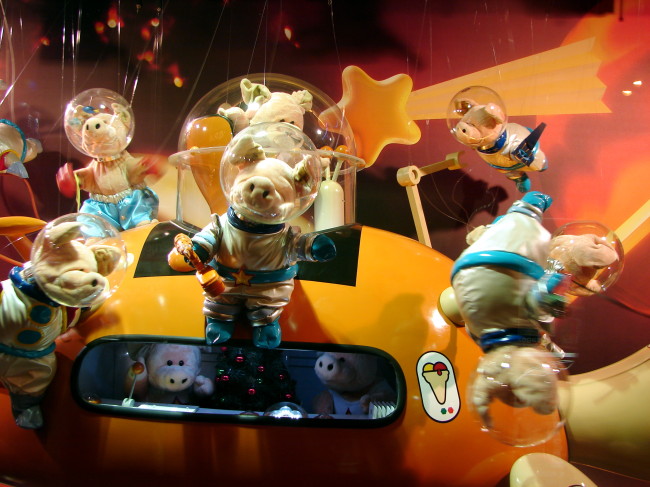 We strolled (at first) along boulevard Haussmann until we finally found my restaurant choice of the evening (I forgot how confusing the number system is on these streets, so I thought we were going to end up back in Reims before I found the restaurant). Pomze is located at 109 boulevard Haussmann (which I think is located next to 927 boulevard Haussmann), and, if you can’t tell by the name, specializes in dishes (and it turned out drinks) made from, what else, apples.

The restaurant is modern, with a bar and store located downstairs. Upstairs, there is a main dining room and a few smaller rooms, where we ate. There was a birthday bash in the main room that evening with the piano and singing going non-stop. It actually sounded better (aka not as loud) from where we were sitting. The place was fun (photo from website). 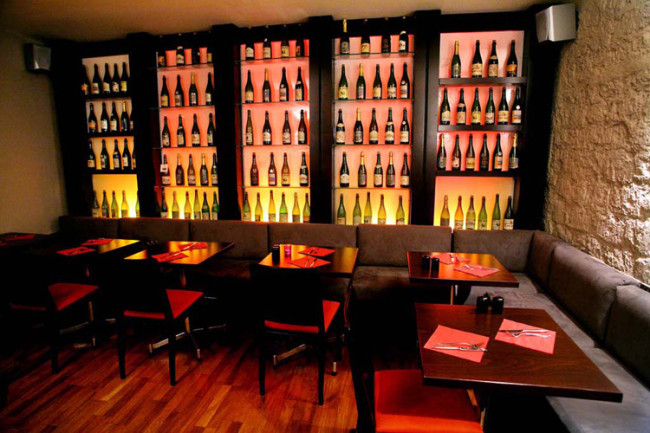 We dined on a chestnut cream soup (made with apple dices flambé with calvados – more on calvados later), scallops with an apple chutney risotto, a beef filet with morels and apple-polenta, an apple crumble with gingerbread ice cream and a caramelized apple cheesecake.

We had chatted with the owner a couple of times during dinner, and as we left, he asked whether we had sipped any of the Calvados. When I told him we had not, he escorted us down to the bar (how he knew we liked liquor I have no idea, except for the martini and bottle of wine we ordered with dinner).

He and the bartender then gave us a short course on Calvados, how it is made, fermented and other interesting Calvados’ facts. Of course the proof is in the pudding, so I bought one, saying I had not especially liked previous Calvados I had tried. This one, however, was very tasty. It tasted much more like an apple brandy.

The bartender then said, “If you like that, try this one from 1964.”  Before I could ask him the price, he smiled and said, “This one’s on the house.”  It was spectacular, and I thanked them.  We enjoyed Pomze, and its staff was professional, but very fun (always a good combo). 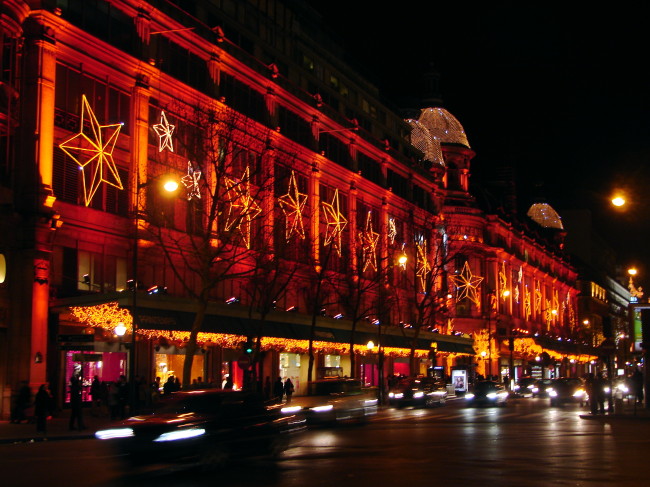 Before we hopped on the metro back to the hotel, we took some more photos of Printemps and Galeries Lafayette. 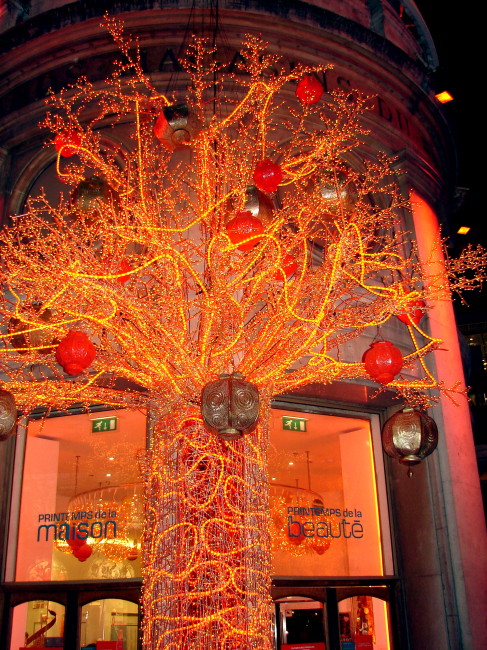 It was a late night out for us. 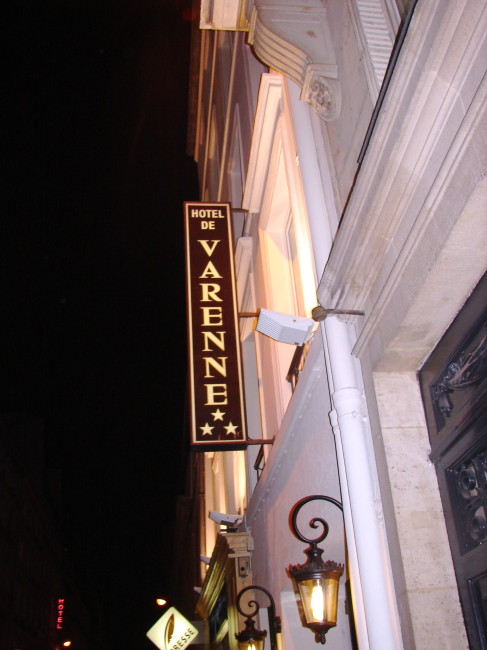 We got back around midnight and went directly to bed because tomorrow we had a rendezvous at 9:30 a.m. with Michael Osman, the Paris walking tour guide guru.  He was going to give us his special guided, half-day tour of the Louvre (that I had actually won for writing that trip report about Italy in 2005), but circumstances would dictate a deviation and detour in those walking tour plans, and we would not step inside the Louvre at all on that Friday.  As we went to sleep that night, Tracy and I could have had no idea that the following day would be some of the most fun and informative hours we had ever spent in Paris, courtesy of one Mr. Osman.

Next – Day Five: Walk Till You Drop, The Attack Of The Newspaper Man, I’m Going To Croque, Is That Sperm In The Pantheon, Giving us The Bird, What A View And Fork It Over!