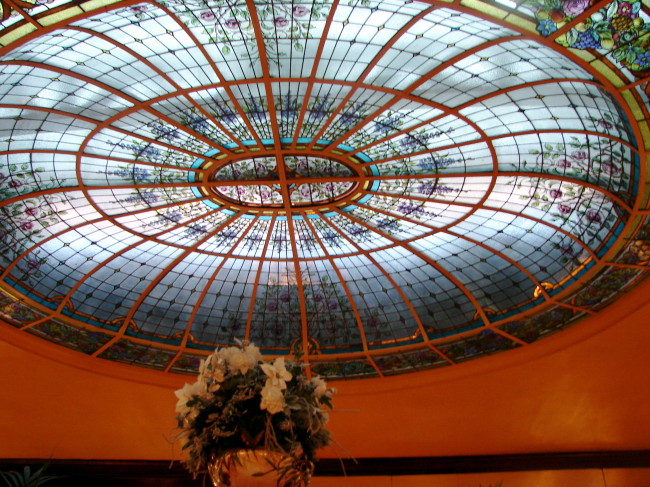 Day Eight – Joyeux Noel, This Old House (Jacquemart-André), Wandering Aimlessly, Is That Peggy Fleming, Where The Hell Am I, Giving Me The Finger and Dining Under The Dome

It was Christmas morning in Paris, but just like every other morning Tracy and I put on our walking shoes and hit the pavement early.

We had thought about how much we had liked Le Florimond, so we walked over to the restaurant, only to see the sign that the restaurant would be closed for the rest of the holidays. I also was hoping to figure out what the name of that wine we drank the other night. 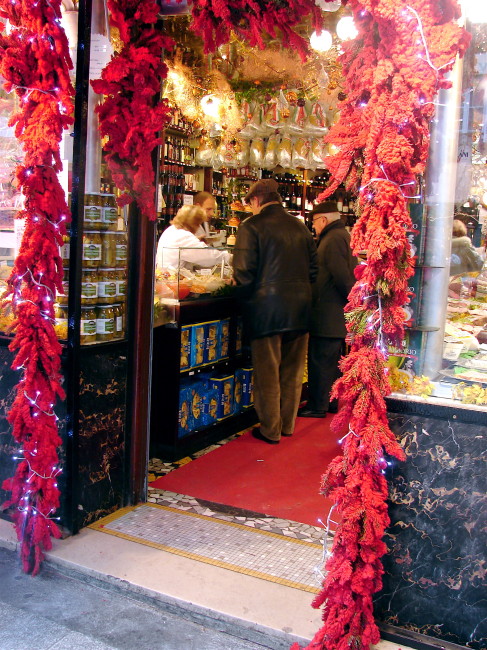 Next, we found a little place to grab some coffee and croissants (hardly anything open) and then walked through the area near the Eiffel Tower, which was shrouded in fog. 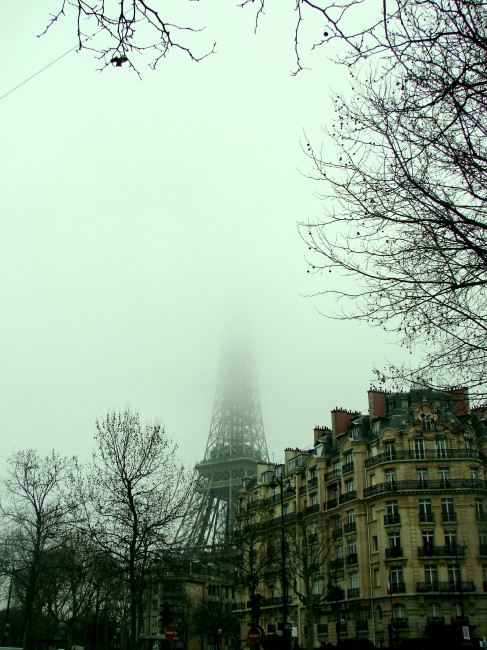 The only place we saw open was a Chinese restaurant, and as we passed by it about 10:30 a.m. a huge contingent of Chinese tourists were being whisked off a Tour Bus and into the restaurant. The entire scene was reminiscent of the family in Christmas Story who ended up having their Christmas meal at the local Chinese place.  I wondered if the restaurant was serving Chinese Canard as their Chinese turkey.

We walked up Avenue Rapp and saw a couple of our old favorite haunts, the Puryicard candy store and restaurant Clos des Gourmets (both closed, of course), a restaurant we had eaten at shortly after it opened in the late 1990s.  We kept walking.

Tracy had picked up a brochure at our hotel shortly after we arrived in Paris that had some information about a museum we had never heard of before, but it said it was open on Christmas Day, so we figured, “Let’s go.” 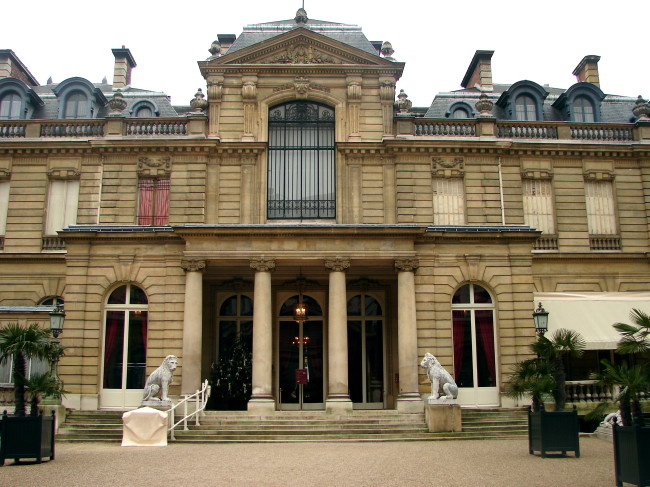 It was back over to bd. Haussmann (our Pomze street) and we headed for the Musee Jacquemart-André. This was our little “undiscovered gem” moment of the trip (many of you well-seasoned travelers already know about it, but it had never been on our radar before).

This is a mansion that was built in the 1870s and belonged to Edouard André and Nellie Jacquemart, hence the name.  These two would have been able to do some great trip reports, because they traveled often to Italy and collected art that they would bring back and exhibit at the mansion.  Even after his death, Nellie made other trips to Italy and also to the Far East. In 1912, after her death, the art and the house were left to the city of Paris. 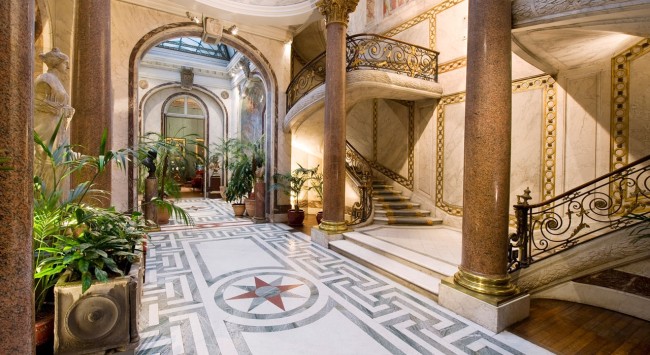 The free audio guide here was terrific, and Tracy especially liked the commentary because it talked a lot about the house, its history, how it was utilized, the couple themselves and the elegant parties they threw here. You could also learn about specific pieces of art, but to us, the history of the people and the home was the most interesting facet of the tour. No photos allowed…these are from internet. 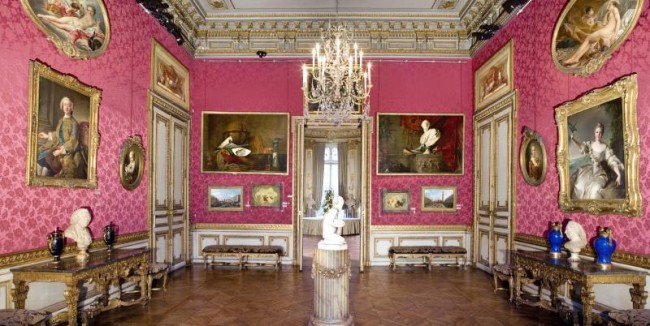 From Tracy, “I found the Italian art collection to be amazing. I loved how the doors in the entry parlor drop into the floor and the walls on either side of the parlor could fold back to accommodate more than 1,000 people. During the parties, musicians played upstairs in the balcony area, while people danced below.

“The amazing staircase was suspended in air. The architect had lost out on the design for the opera house, which has a similar-type stairway, but the museum staircase was deemed better and more amazing.

“The house is still used for private functions. Maybe we could renew our wedding vows here.”   Boy, is she sneaky!

There was also an exhibit going on of golden treasures. There were television monitors that explained the exhibit in English with French subtitles, but we were getting hungry.

During the tour, our noses had been tempted by the smell of food wafting through the building, so after we dropped off the headphones and had lunch in the restaurant at Jacquemart-André. It was charming…and good.

Tracy had the Le Prince salad, which consisted of a mixed salad with curried chicken and carrots, raisins and grapefruit. I don’t remember what I had for lunch, because we split ½ bottle of Pommery Champagne, and I, as usual, took more than my fair share.

We then ducked into their nice, little gift shop, and Tracy bought a bunch of butterflies (not live ones). Tracy again: “Butterflies were quite the decoration in Paris this year. We saw them in white, pink, red, gold, black and pale blue. They were displayed in front windows and on the tree in our hotel lobby.

“The only place we saw them for sale was at the museum gift store, and the lovely Tracy (man, how she sneaks these comments in) came home with pink, red and gold butterflies – 1.30 euro apiece.”

The rest of the afternoon we just wandered somewhat aimlessly (but in a good way), and there was not a lot going on. Then up ahead, we saw a bunch of people, and the entire area was bustling with people. We had made it back to the Jewish Quarter in the Marais, and it was hopping full of people. 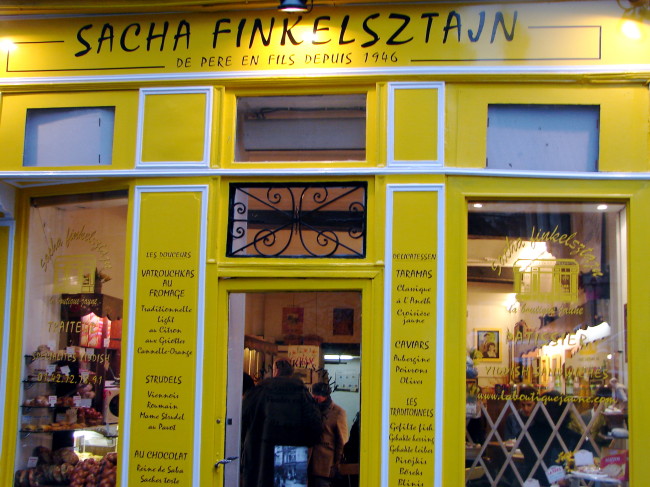 I was thinking of grabbing something else to eat, but I had a couple of more wardrobe malfunctions earlier in the day, so I didn’t want the local populous to think I was some sort of meshuggener by flailing away in my misguided attempt to get out my wallet. 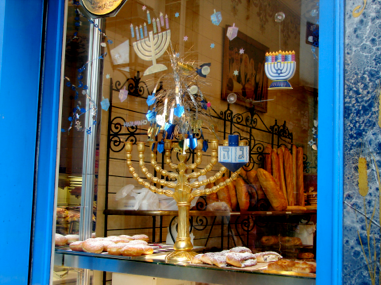 As soon as left the area, it was quiet again until we reached the next multitude of people. 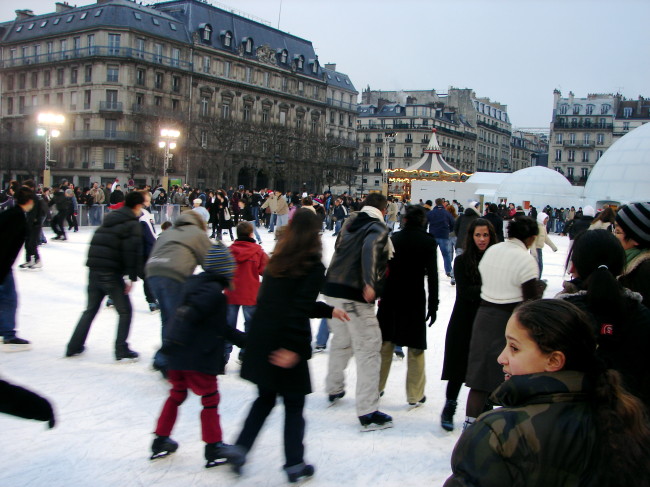 Out in front of the Hotel de Ville, it looked like a Dorothy Hamill (one of my first true loves after my unrequited love affair with Peggy Fleming years before) reunion. 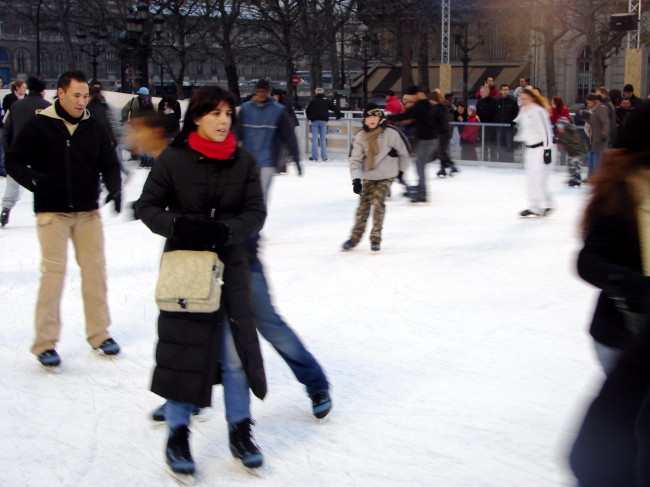 Tracy asked (jokingly) if I wanted to get out on the ice and try it. Since I had not ice-skated since the Nixon administration, I deferred. 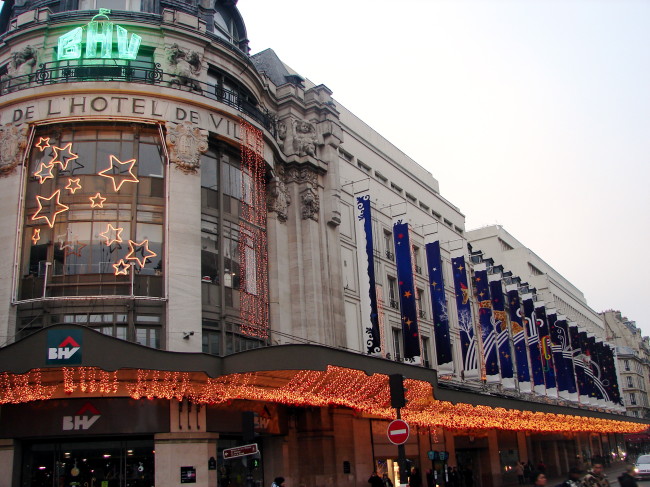 On this afternoon, we had also thought about going to the Pompidou, but the line had been rather long, and for me to go back to the Pompidou, it would have to have been a much shorter line. 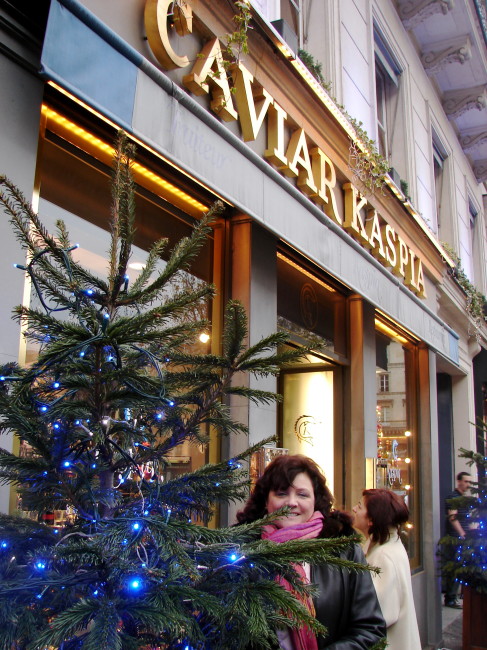 Instead we walked around Paris, enjoying the lack of crowds. 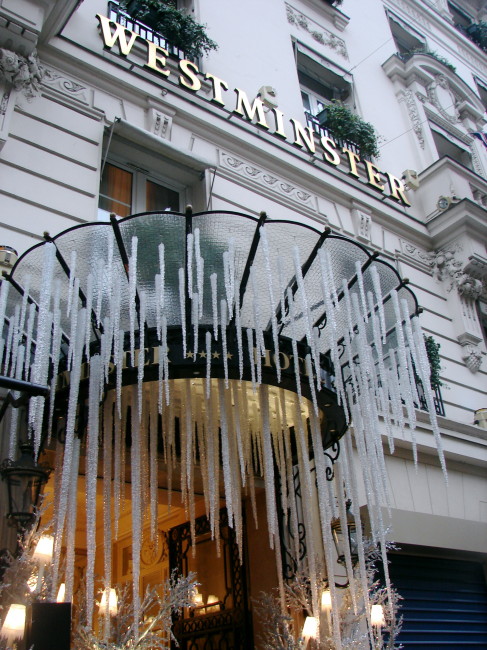 We also stopped in some other “art” exhibit near the Marais, which looked like half art exhibit, half bad flea market, but it was nice to go inside, because it was chilly.

Our Christmas dinner on Christmas night was at Bofinger. It was when we got off the metro at Bastille, that Tom’s Tuscan Tours (please see 2005 trip report for details) got a little derailed. I had forgotten to bring the address, and at the Opera Bastille (a place I knew it was fairly near), there were about eight or nine options on which way to head.

Now a sane and raisonnable person would, of course, ask one of the people standing nearby which way Bofinger was located. Not I. In a moment of temporary insanity, I decided I could figure it out with that GPS system of a brain installed in my stubborn head.

Trying to be as French as possible (of course, they had probably seen me do my cartoon act for the past ten minutes), I went up to a gentleman in front of the opera. In my best really bad French I said, “Oú est Bo-fahn-jay?”

He looked at me and said, “You mean BowFinger.” Yeah, that’s the place. By the way, there were lots of restaurants open in this neighborhood. I know that because I saw them all on my ten minute joy walk.

We were now 20 minutes late for our 8:30 reservations, and we walked in the door. “Bonsoir,” I told the Maitre’di. “We are Mr. and Mrs. Late People.” He could not find our names.

I then told him our reservations were for 8:30. He said, with a little bit of an attitude (which I like), “Oh, you should have made them for 9.” He then gave us a quick “I’m kidding” look and directed us to our table located under the belle epoch ceiling. It was quite cool and, even better, there is no smoking in this section (although smoking in restaurants did not bother us at all on this trip).

A large number of Americans presumably dine here, but on Christmas night it was mostly occupied by French families, lovers and a couple who we surmised were either on their first date or heading for divorce because they talked about as much as a couple at a Marcel Marceau convention (now that’s a reference I didn’t see coming).

I liked the traditional French waiters, the room and the experience. Dinner was fine, but, once again, it wasn’t one to write home about.

It was more escargots for me, while Tracy had an arugula, egg and bacon salad. My beef in peppercorn sauce wasn’t bad, and Tracy had a Napoleon of seared scallops with Parmesan crisps on a bed of cornichons.

Dessert was good. We had a chocolate mousse cake with caramel on a cookie crust.

For drinks, we had started with some champagne, then a bottle of 2003 Chateauneuf de Pape L’Orateuers (or at least that’s we wrote down) with dinner, and for some strange reason, I had another Irish Coffee after dessert. Interestingly, or maybe not, at home if I have caffeine after 2 p.m., I’m a mess trying to sleep. In Paris, I can drink one at 11 p.m. and sleep like a baby.

Our waiter told us that Bofinger can serve 1,000 or so people on a very busy day, and on this Christmas they were above 700 for the day. The kitchen stays open until 1 a.m. 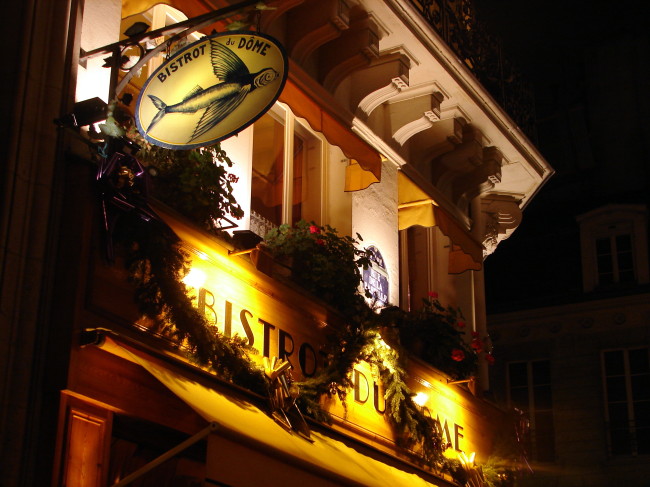 As we exited Bofinger, we spotted another neat looking little bistro that we might try on a future visit.

When we looked at the Eiffel Tower after exiting the metro stairs, we could only see a little of its base through the thick fog. I remembered I had not taken a picture of it at night with its upside down Christmas tree glowing, and I only had one more night in Paris. As we drifted off to sleep, I prayed to the weather gods to let the fog lift enough the next evening to get my picture of the Eiffel Tower at night.

Next – Day Nine – Little Town Of Bethlehem, Extinct Museum, A Day At The Opera, A Mai Tai In Paris, Herb Appeal And Get Me To The Tower On Time