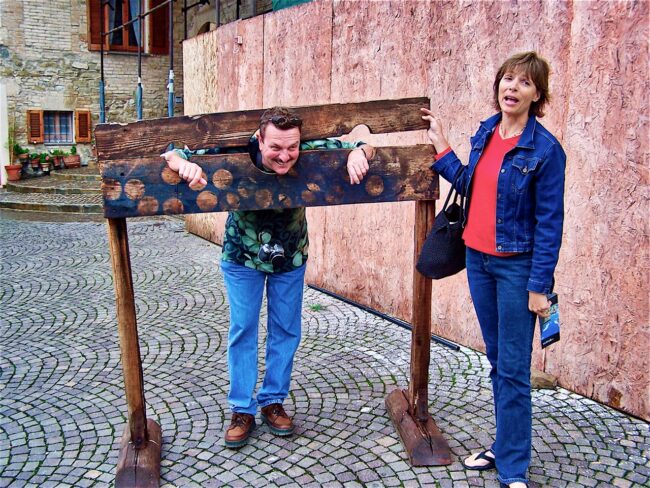 Day Four – Does White Wine Go With Mass, What Town Is This, Of All The Gallstones, Where’s Prince Charles and The Spello Restaurant Dash

Downstairs in the breakfast room, we were going over my detailed itinerary I prepare before every trip (yes, I am a crazy planner).  After breakfast (and after spilling coffee on my blue shirt) at the Palazzo Bocci, we were off on the road to Spoleto (the forgotten Hope-Crosby movie). 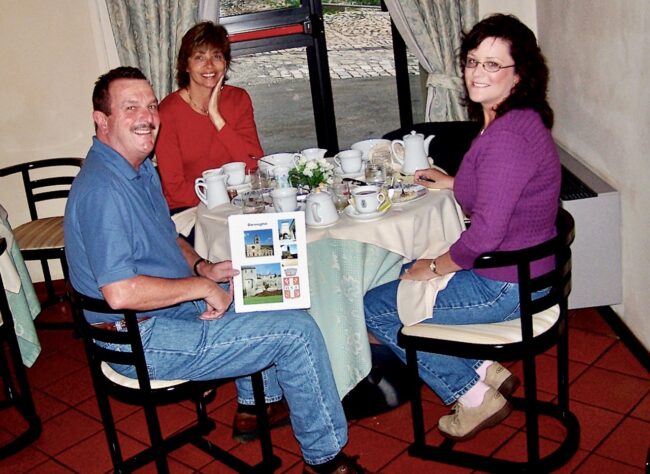 On the way, we stopped to take pictures of a cute hill town, which we thought (by the signage nearby) was Foligno (one of many foreshadowing stories on this trip). 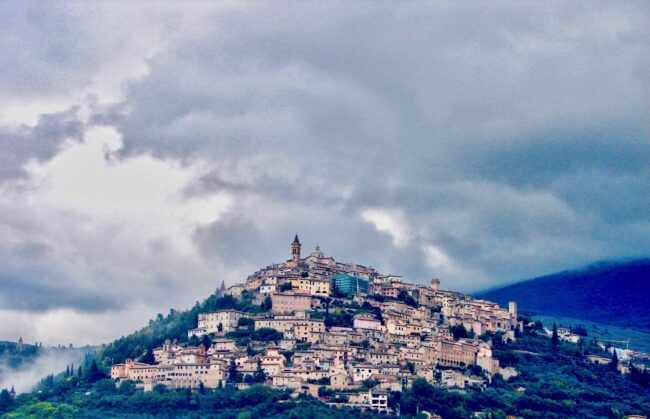 The girl at the desk had told us there would be a wine festival in Foligno that night, and we decided we would check it out later on the way back. 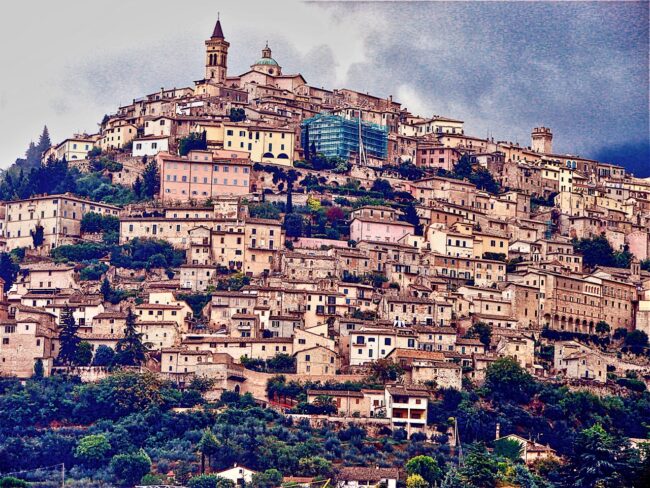 We drove to the old town of Spoleto (well, I guess they are ALL old towns) and parked. We hiked up to the top of town (our first inkling of how our feet were to feel for the next 19 days). 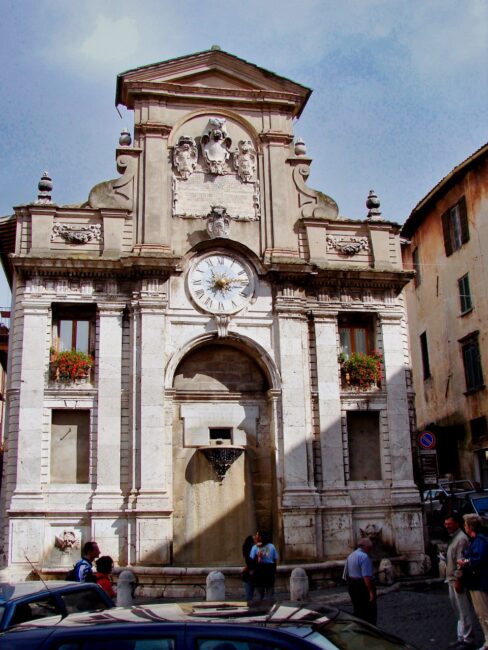 If we had so chosen, we could have paid 20 Euros apiece to join in the Spoleto Wine Festival, which consisted of taking your glass to various venues and consuming mass quantities of wine.  Since it was only 10:30 in the morning, we determined that would be a huge tactical mistake  We barely missed the tour at Rocca Albornoziana, the place where Lucrezia Borgia was sent to get away from her second husband. 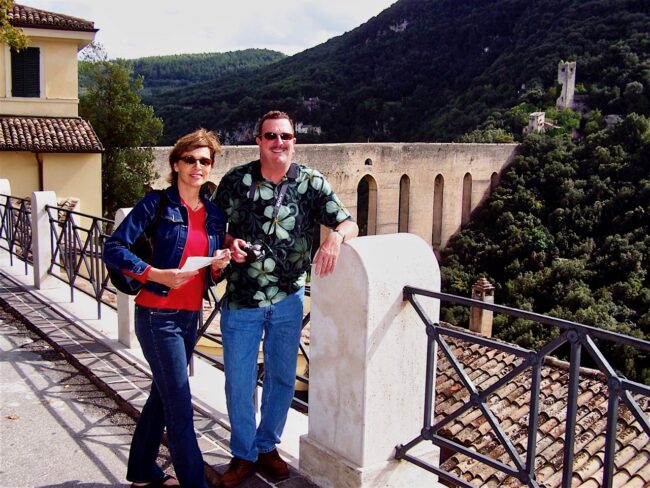 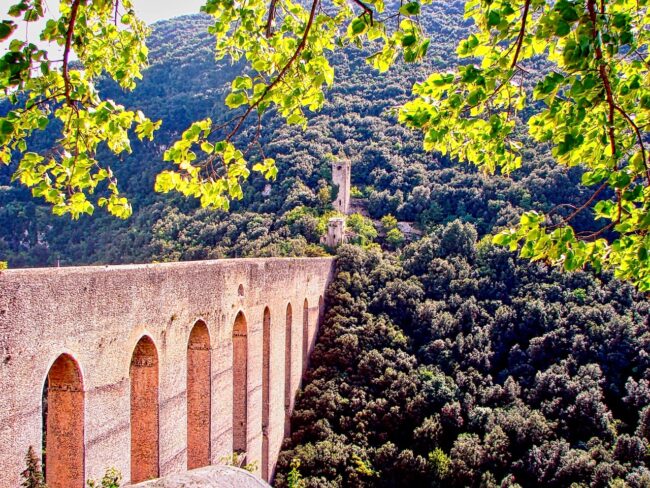 Instead we walked to the Ponte delle Torri, a bridge built on an old Roman aqueduct, where came upon a small waterfall. 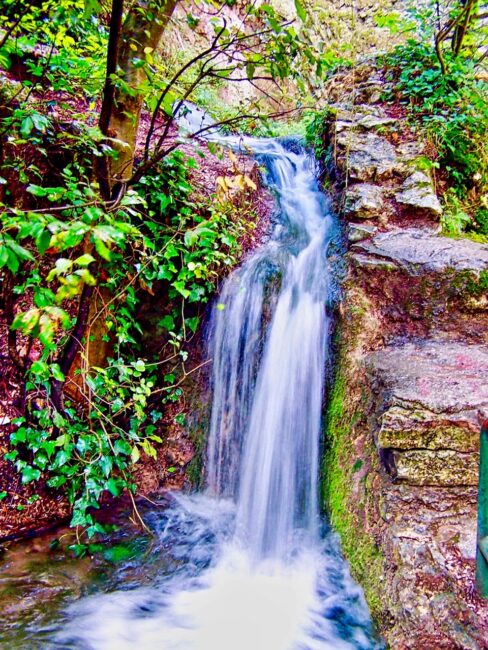 The views from here of the valley behind Spoleto were spectacular. 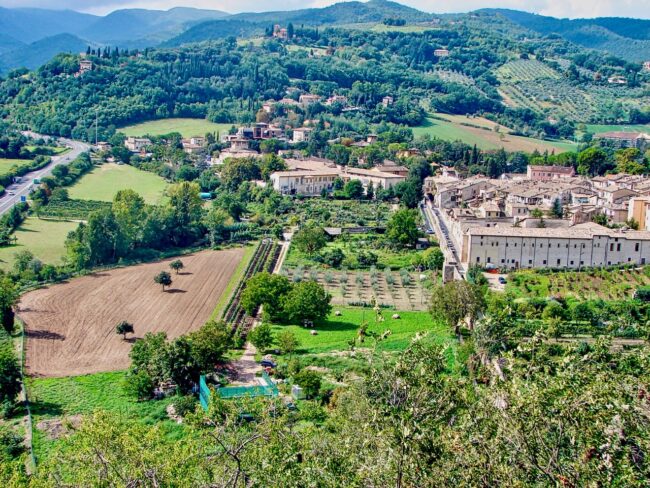 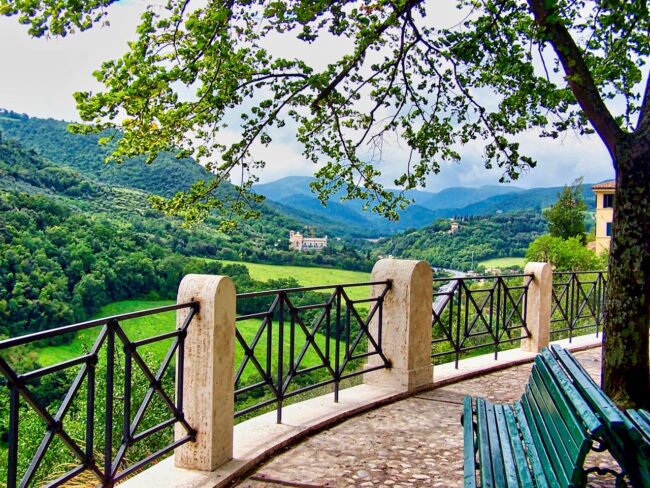 After spending some time soaking in the natural wonders, we headed toward Spoleto’s Duomo. They were just ending Sunday Mass, so we waited nicely and quietly in the back. 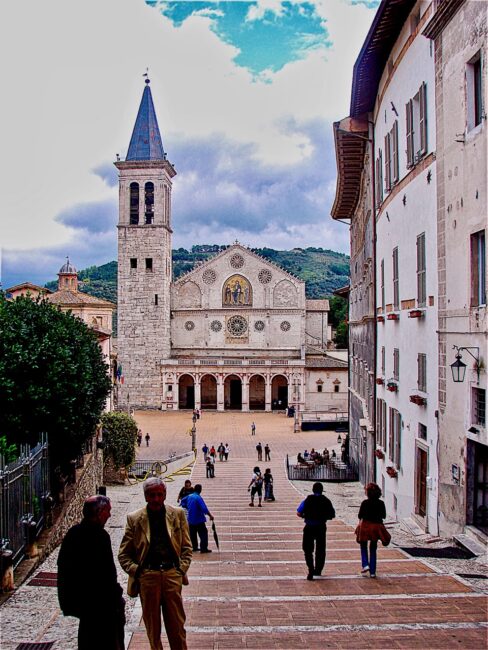 A woman showed up inside the Duomo with a wine glass tied around her neck (obviously part of the wine tour, or at least I hoped so). Suddenly the phrase “drinking Mass quantities of wine” took on quite another connotation. 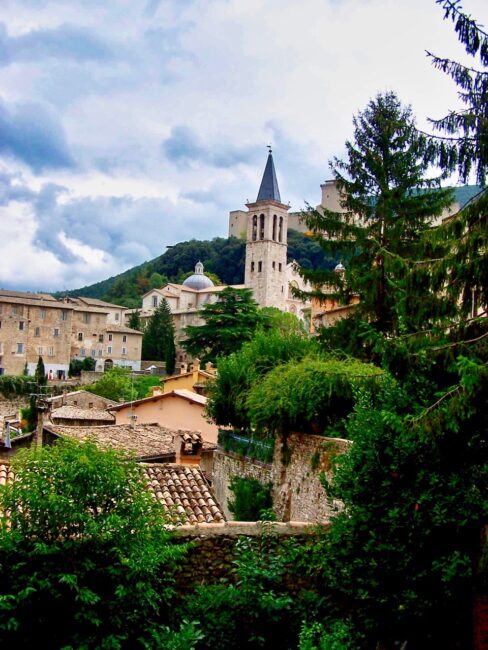 In the process of departing Spoleto, and for the first time since I had picked up the car, I drove the wrong way on a one-way street.  Obviously the Spoletons had been warned of our arrival, and fortunately there was no carnage.

Speaking of wine (and, if you remember, I was), we headed toward Montefalco, the home of Sagrantino and Sagrantino Passito, its famous wines. 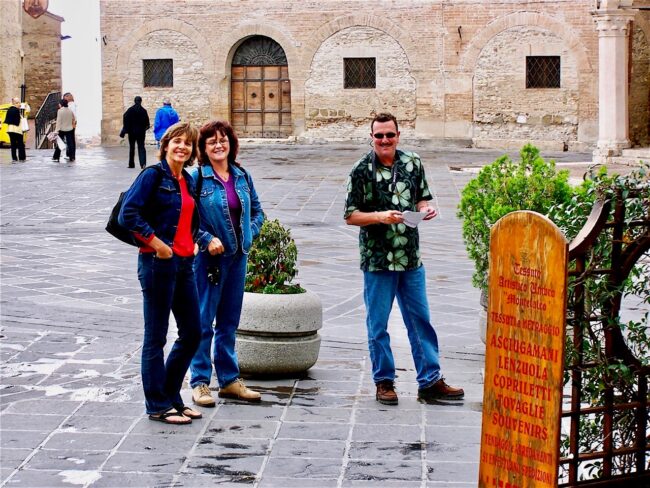 We were told that the Sagrantino grape (from which these wines are made) is a grape found only in the Montefalco region and that Syrian monks might have introduced it in the 7th century. Since we were hungry, I didn’t question whether that was true or not. 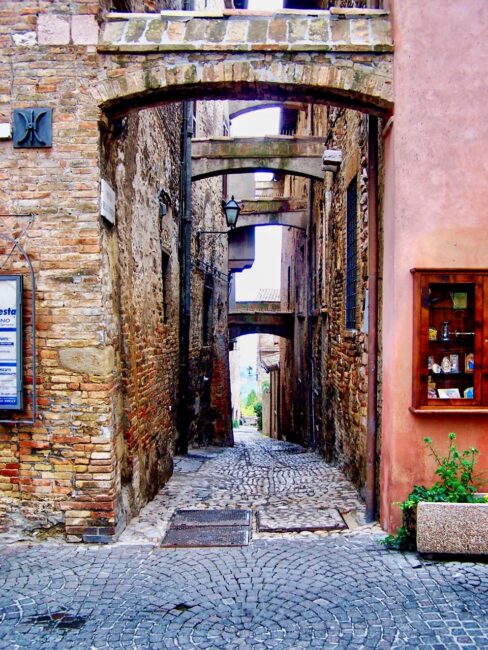 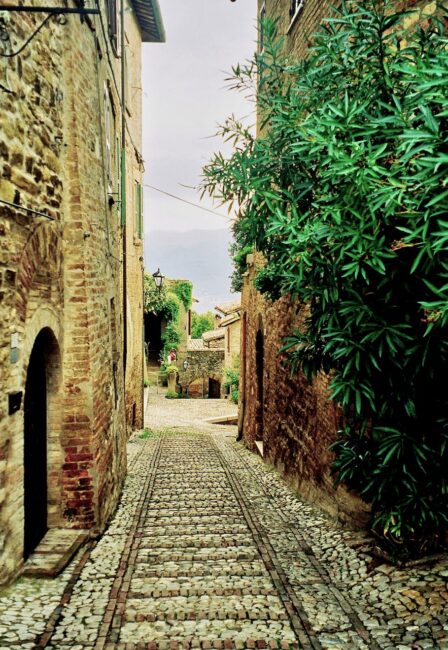 We dined at a local haunt (at least it seemed like a haunt) called Il Falisco. It had turned chilly and was quite foggy outside, so the respite was nice, and we lunched on a couple of risottos, a spaghetti dish and noodles with wild asparagus. There was a cool fireplace (hmm, is that an oxymoron?) where they grilled meats.  Even though I had just learned about Sagrantino, we decided on the House Red (a 2002 Roccadi Fabn’ Montefalco Rosso) for 12 Euros. It turned out to be a vino bargain.

After lunch, we walked to Santa Chiara, the church where Montefalco’s patron saint, Clare, lies in a transparent casket. The church was dark and quiet, and we were the only people inside.  We saw Clare’s body, and I told the group we could knock on a nearby door, and, according to something I read, the nuns could show us the remains of her heart, three of her gallstones (which represent the Trinity) and the scissors that were used to cut out her heart. Since we had just finished lunch, we all decided to let the remainder of Clare rest in peace and pieces. 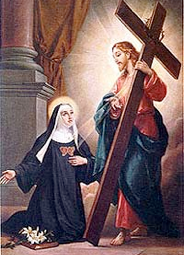 The “Walking Brits” from the Palazzo Bocci had told us not to miss the little town of Bevagna, because it was “special.”  We took the hint and traveled there next. 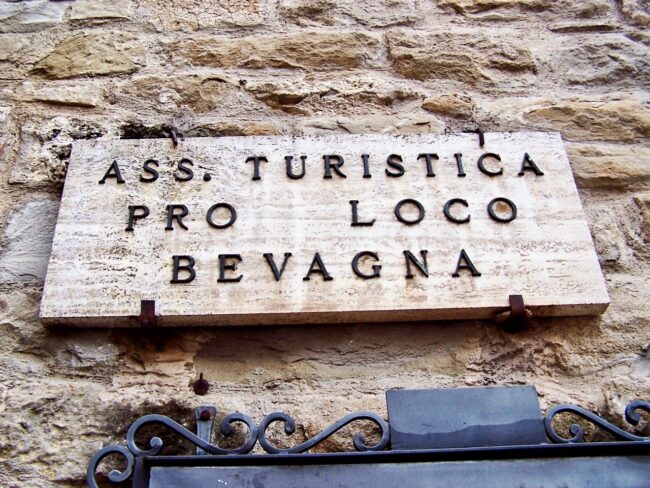 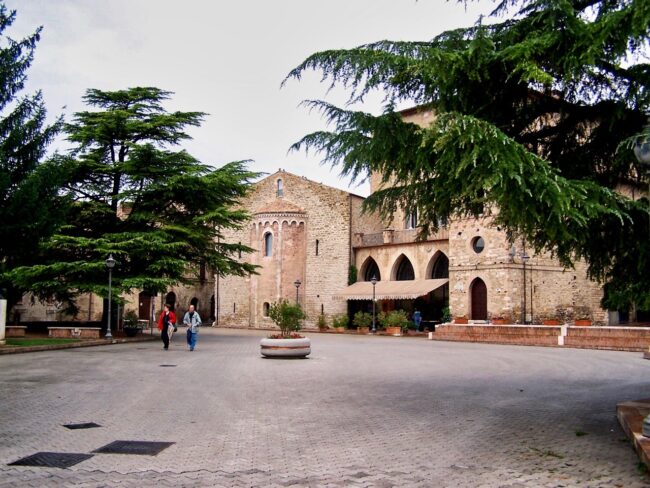 Bevagna is a lovely, little town. 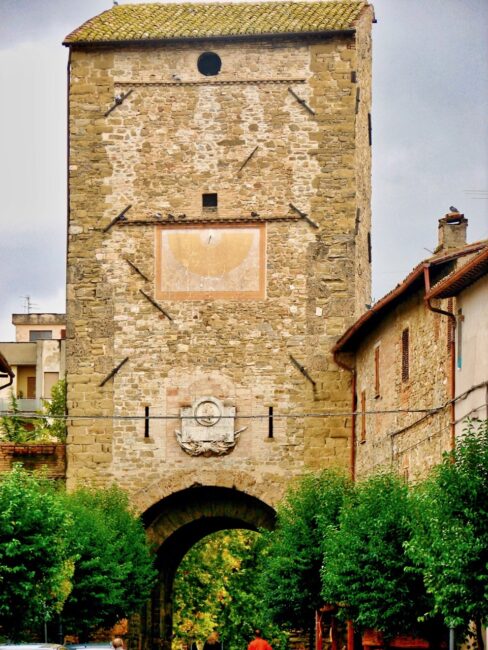 On the town’s Piazza Silvestri are two gigantic churches. We went into the Basilica di San Silvestro, built in 1195. Prince Charles had been stumping to get money to help restore the church, but there was no sign of him on this day.  Also, a river runs through it, although there was no sign of Brad Pitt. 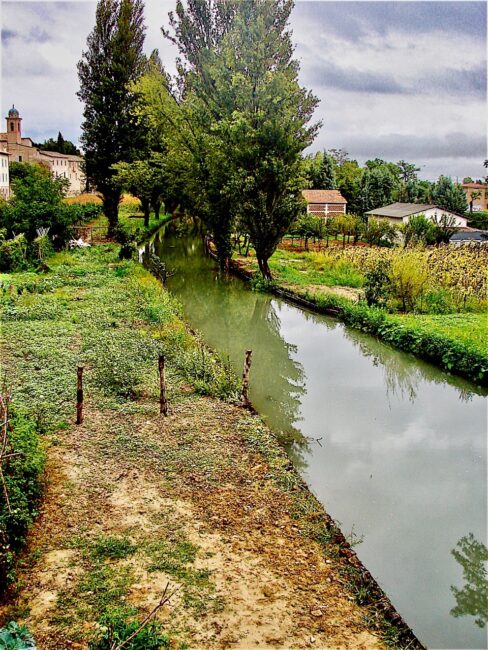 Mary, still upset by my driving the wrong way in Spoleto, took stock of the situation, and gave me a quick punishment (below), and we were back on our way.

Since it was late afternoon, we thought it might be fun to drive to the charming town we had believed earlier in the day to be Foligno. Once we got inside the city limits of Foligno, we realized this was definitely not the charming town on the hill, but a much bigger city, and it was us getting more lost by the moment.  Well, I was actually getting us lost, but when I can blame an entire town, I do.

Just when we thought we were lost for sure, navigator par excellence Tracy saw the sign for the road to our hometown of Spello. We hightailed it back to the Bocci wondering what the heck was the name of that mysterious hill town we had photographed earlier in the day, but decided that two more bottles of wine on the patio would make that a moot question.

After discussing the Spello restaurant scene, we had come to the conclusion we would like to try La Cantina Ristorante in Spello for dinner, a restaurant that had been recommended to us. The restaurant’s welcome was lukewarm at best, and we did not feel a good vibe. It was very, very quiet with lots of long, drawn-out faces (perhaps they were just a bunch of people who couldn’t figure out how to get their cars in reverse, I thought).

Anyway, after a few minutes we made a quick group decision and headed back to Il Molino. Heck, it would be new to Mary (who had been Ambien-free for more than 24 hours), and we had been very happy with our meal the previous evening (photo courtesy of italytips.com). 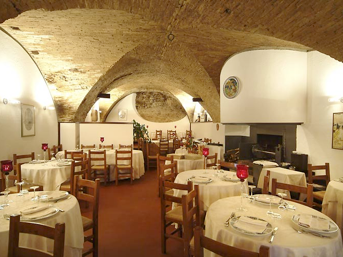 On this night, the spectacular dish was a Filet with caramelized balsamic that Kim and I ordered. It was delicious. Tracy dined on another steak dish that she deemed to be too rare, and Kim (Mr. Chivalry) changed dishes with her (I would have been chivalrous had I not already eaten my entire steak).

The entire meal was complemented nicely by a 2003 Montefalco Rosso Scacciadiavoli (which took us less time to drink than for me to spell) that cost 13 Euros. 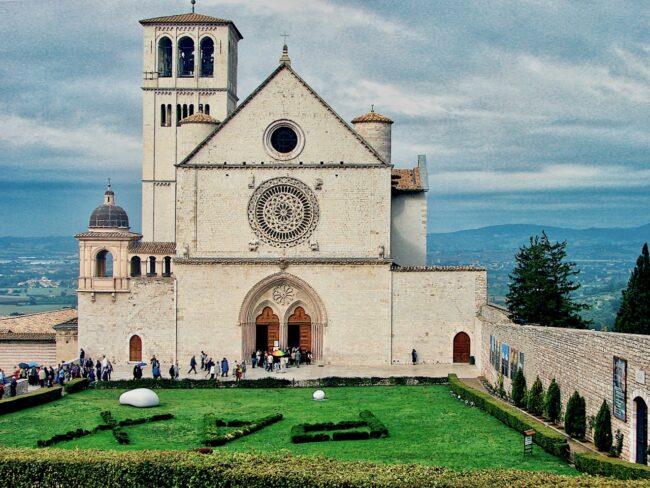 Back at the Palazzo Bocci, I received a lecture on chivalry from Tracy, and we got to bed early because the next day our feet were going to get their first real test on the hilly streets of Assisi.

Next: Day Five – Don’t Be Assisi, It’s All Uphill From Here, The 47-Minute Perugian Tour, The Elusive Stairs and Well, It Looked Like A Parking Lot To Me