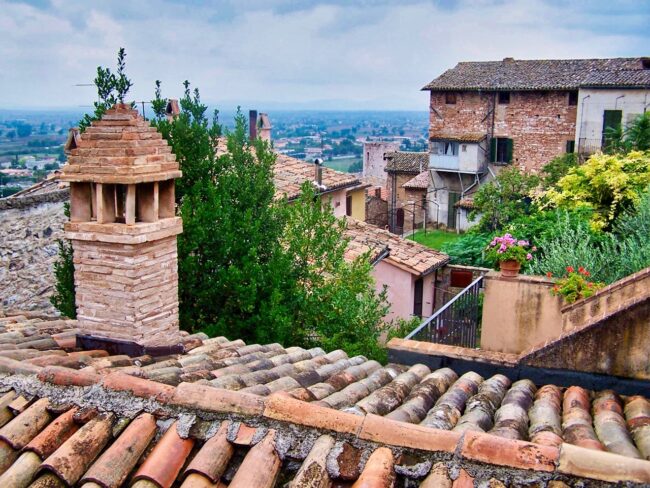 Chapter Two – Somehow We Make It To Spello

Day Three – Things Go Better With Spello, Reversal Of Misfortune and I Didn’t Know You Could Speak Yiddish!

Tracy and I reveled after a good night’s rest (well, at least as much as two people can revel at 8 a.m.), and it was time for me to walk halfway through the Hilton/Airport sauna tunnel to pick up the rental car.  I thought about wearing my swimming trunks and a towel to stay cool, but decided against it for fear of causing an international incident.

The Hertz line was a mile long, but I quickly whipped through the Europcar line and walked to search for our automobile, which turned out to be an almost brand-new Fiat (may it rest in everlasting peace).

It didn’t take me long to find myself in the first rental car jam of the trip.  I drove toward the automated gate where drivers insert the card in the slot to exit the rental car area, but the guy in front of me seemed to be having a bit of difficulty.   He wanted to back his car up because his card wasn’t working properly.

“No problema,” I thought. Well, no problema until I tried to get my car in reverse.  Try as I might, the damned car would not go into reverse. 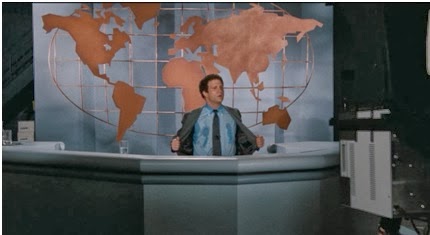 Finally, the guy got out of his car, walked past me, and shot a look at me that said, “Why didn’t you back up imbecile?”  I smiled like, well, an imbecile.  He got back in his car and (thankfully) we were all going forward again.

When I returned to the hotel room, Tracy saw my sweat-stained shirt and said, “Man, that walkway must have been really hot today.”  I didn’t tell her about my driving faux pas until after I quickly took my second shower of the day.

Downstairs, we had a mediocre 12 Euro Continental breakfast (OK, the Hilton is a tad overpriced), checked out and waited for Kim and Mary, who showed up at 11:30 a.m.

As Mary changed clothes in the Hilton lobby bathroom, she ran into our first Ugly American, which thankfully turned out to be our last Ugly American of the trip. A young woman put her hands under the automatic sink, and, as automatic sinks often do, it took a couple of seconds for the water to start flowing.  Mary said the woman screamed, “I hate Italy!  You have to wait for everything!”

Obviously, not a devotee of Slow Travel, the young lady then stormed out of the restroom. This phrase, “You have to wait for everything,” became our humorous and endearing catch phrase for the remainder of the trip, because waiting and relaxing is what makes Italy so endearing. 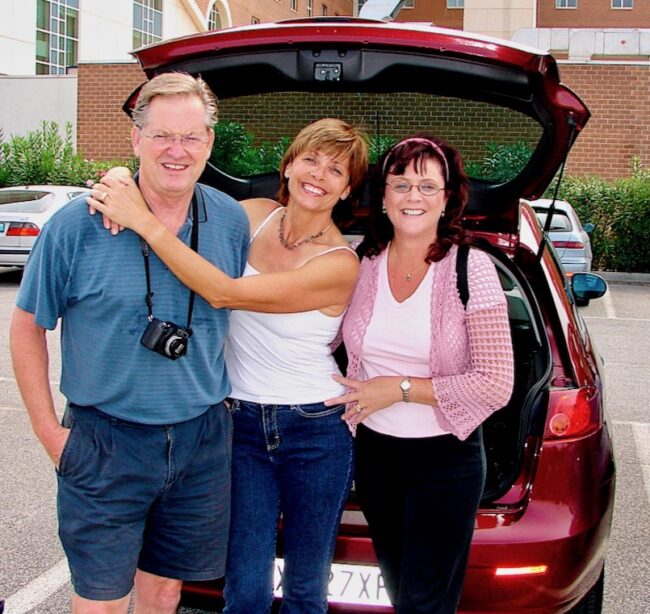 We jumped in the car to head for Spello, but first I told Kim about the little reverse problem I encountered earlier that morning, and he attempted for a few minutes (with no luck) to get the car to back up. “Well,” I thought, “I don’t have to use reverse on the Spello drive (foreshadowing alert!), so we’ll deal with this minor inconvenience later.”   There was also no manual explaining the manual (transmission) to peruse. 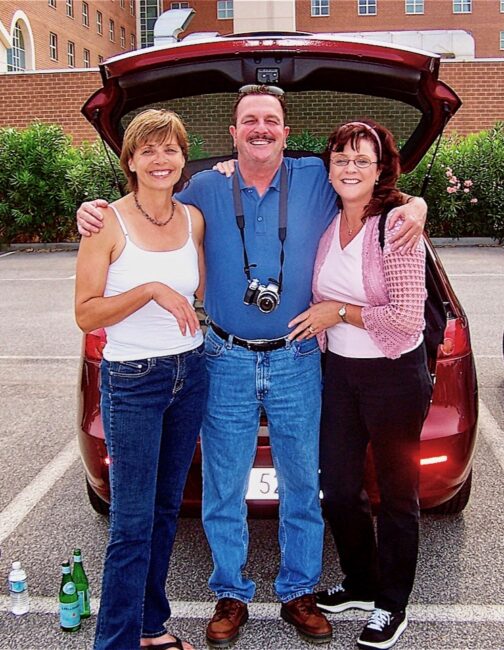 The traffic was horrific on the Rome Ring, but once we got into the beautiful countryside, it was clear sailing.  Shortly thereafter, on the two-lane road heading toward Spoleto, it became exciting to see how close the cars passing by other cars while speeding in the opposite direction actually came to crashing head on into our vehicle.  I looked in the rear-view mirror and saw Mary covering her eyes so she didn’t have to witness these many near-death experiences.  Mary was also getting sleepy.

We arrived in Spello after a little more than two hours and headed for the city center and our hotel for the next three nights, the Palazzo Bocci.

Even with eight eyes peeled, we passed right by it and, like an airliner missing the runway, I circled back around to try again. The next time I took a different route (not on purpose), which put me in a parking area near the center of town (not the parking area I wanted, but close enough to walk to the hotel). I passed nearly every space until I nearly came to a dead end in the parking lot.  Fortunately, out of the corner of my eye, I saw a vacant spot in my rear view mirror and planned to put the car in reverse when I had a terrible thought. “I don’t know how to put the car in reverse.”

This was no time to panic.  There was no point making a bad impression on our Spello neighbors in the first five minutes.  At one point, in a Keystone Kops’ moment, Tracy, Kim and Mary actually tried to push the car backwards into the parking space (which was the first time Italians could have reasonably laughed at us, yet the locals stayed restrained, though perplexed, by the actions of their new out-of-town neighbors).

We tried many different variations on a theme until Kim finally came upon the answer.  He put his fingers under the ring and pulled up on the stick. “Spello, we have touchdown!” 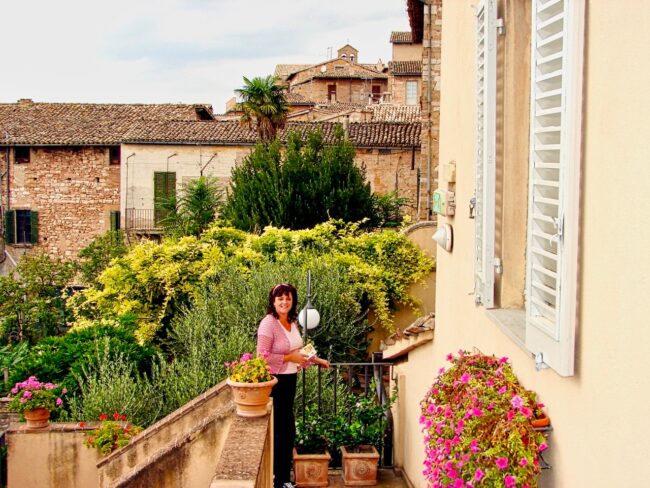 The Palazzo Bocci was everything it was cracked up to be from reports I had perused.

Our room was lovely, and we had a lovely view overlooking the Tuscan countryside from our little patio (courtesy of Kim and Mary who took the room without a view). 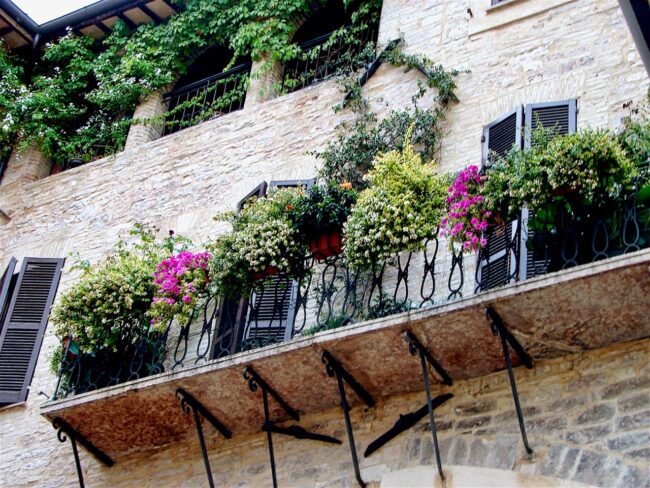 There was also a large patio where the four of us shared wine, cheese and various meats for the next few nights.   It was also a spot where we met some of the other hotel guests. 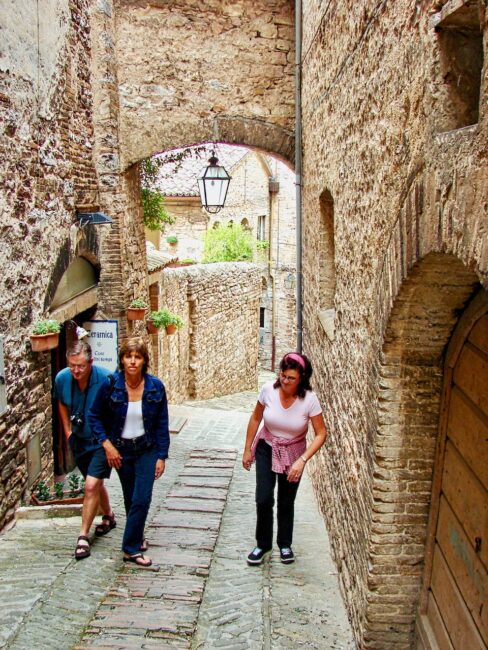 After unpacking, the four of us strolled the streets of Spello (fortunately no one recognized us as the crazy “pushing car” Americans). 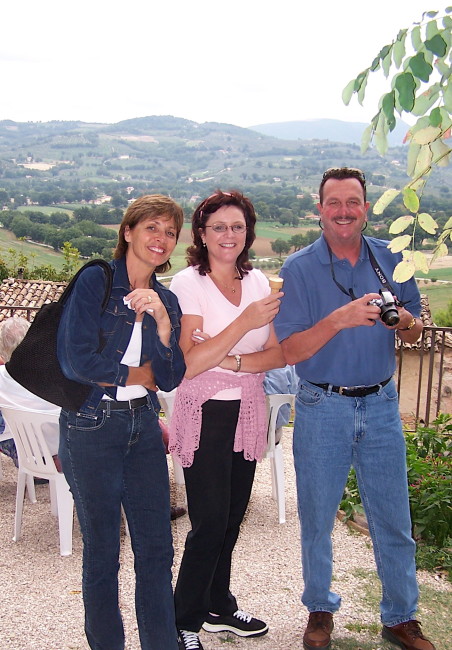 We quickly partook in our first gelato experience (we know the important things in life), and found some spectacular vistas. 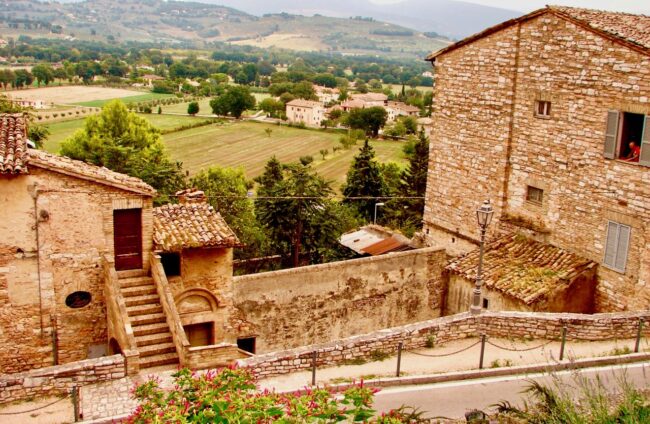 For the better part of an hour we traversed the quiet streets with their homes full of fresh flowers adorning the outside. 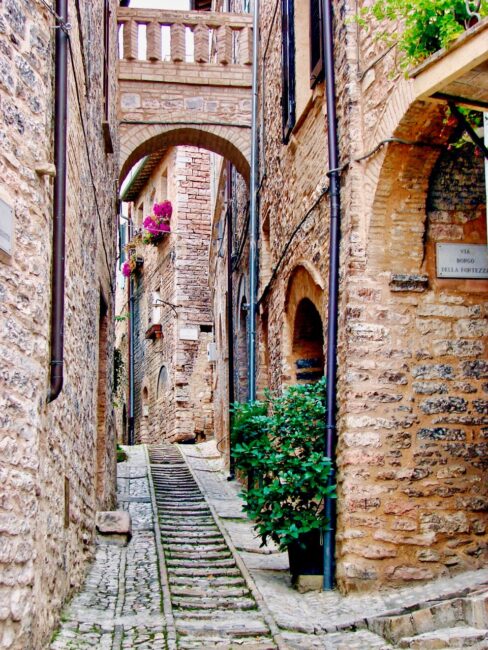 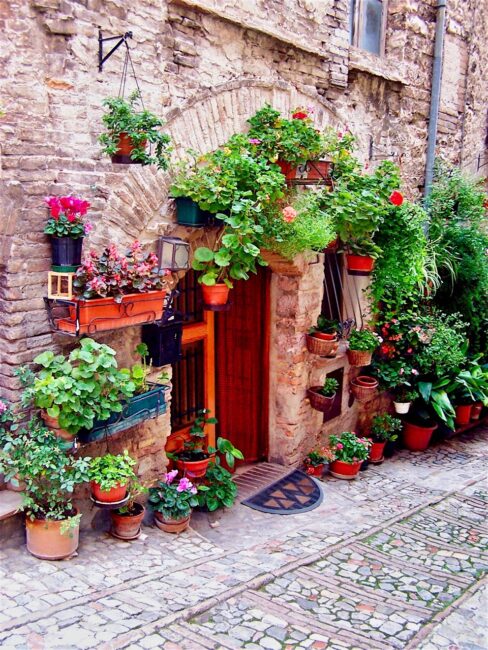 There was picturesque alleyway after alleyway, and before heading back to Palazzo Bocci … 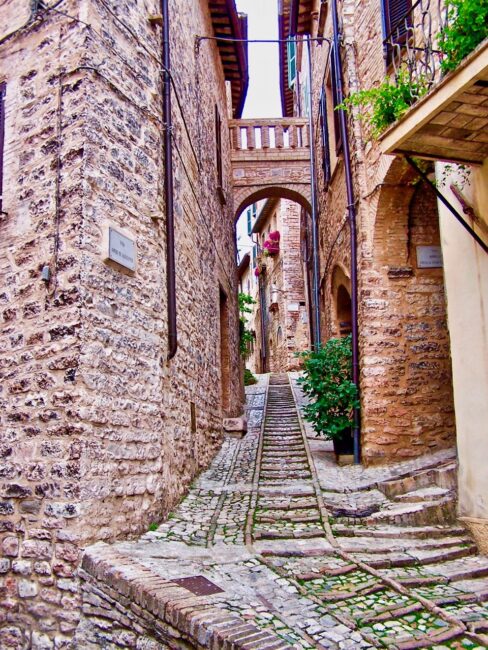 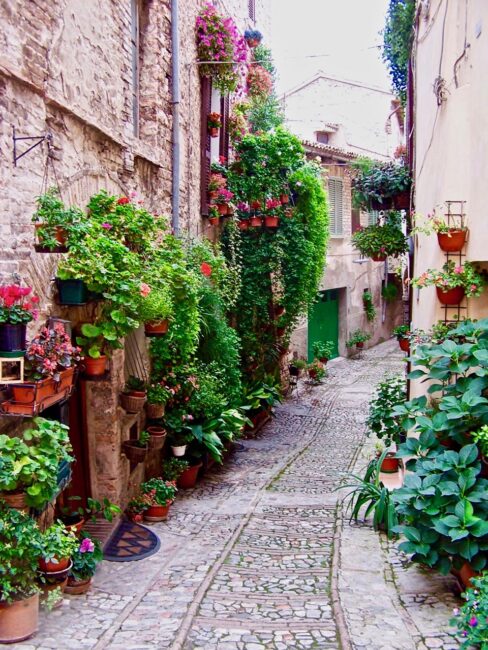 … we stopped in to see the Pinturicchio frescoes at the Santa Maria Maggiore and came across a nice wine store to grab a couple of bottles of vino to enjoy on the patio before dinner. (photo from Internet) 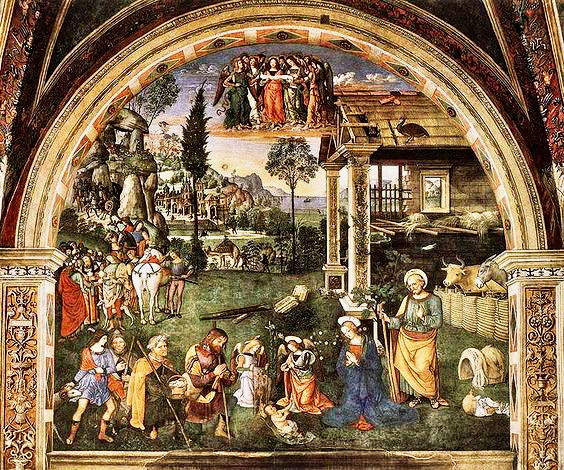 Our first-class airline experience unfortunately was quite different from our friends. They had flown to Rome via Atlanta from San Diego in the cattle car, and Mary was beginning to feel the effects of the long flight as we sat outside sipping vino. She was able to converse coherently with some Brits who were on an Umbrian walking tour, but it seemed the wine was quickly taking a toll on her mental capabilities and ability to enunciate properly. 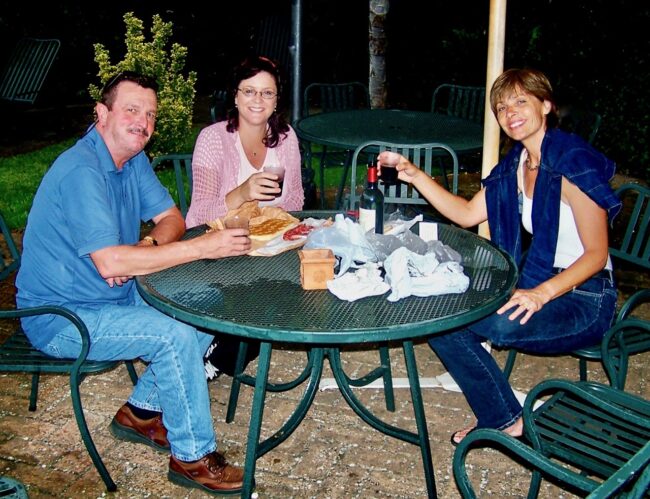 We were chatting with a nice young German newlywed couple who told us about some great restaurants in the Jewish section of Rome (where we would end our trip).  Suddenly Mary started talking Yiddish to them (the sad part is she really doesn’t know any Yiddish).  It was at this point we knew Mary would not be joining us for dinner.

Kim led Mary to their room where, unbeknownst to her husband, she decided to take an Ambien, which more than sealed the deal. The next thing Mary knew was the light of the next day.

Kim, Tracy and I dined at Il Molina (the hotel restaurant located across the street and down a few doors). It had an interesting curved, vaulted brick ceiling, a fun waiter and terrific food.

Tracy had the best dish of the night, a pasta concoction chock full of pistachio, Pecorino and Prosciutto.  The honeydew in my prosciutto y meloné tasted like candy.  I also tried the Zuppa de Frutta, a fantastic dessert of honeydew, grapes, kiwi and peaches in a mint-type sauce. 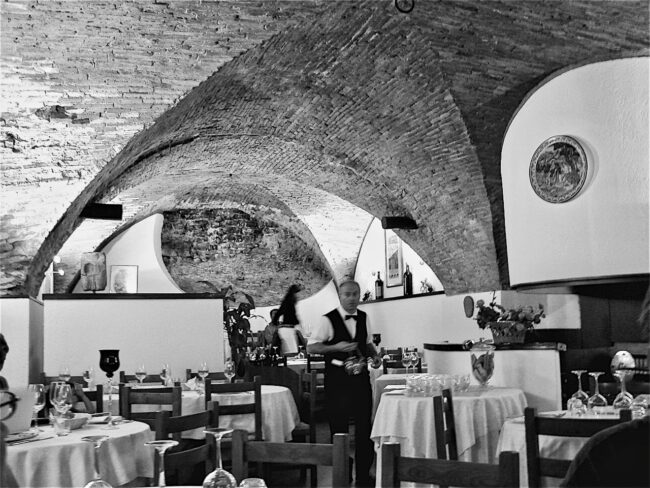 The Montefalco 2003 Rosso Antonellio was a bargain at 13 Euros.  We all toasted to our great fortune of being back in Italy and realized how incredibly lucky we were to be able to enjoy trips such as this.

It would be the last day for quite some time where our feet and legs would feel good, because tomorrow would start our ten-day mission of exploring hill towns throughout Umbria and Tuscany.

Next:  Day Four – Does White Wine Go With Mass, What Town Is This, Of All The Gallstones, Where’s Prince Charles and The Spello Restaurant Dash