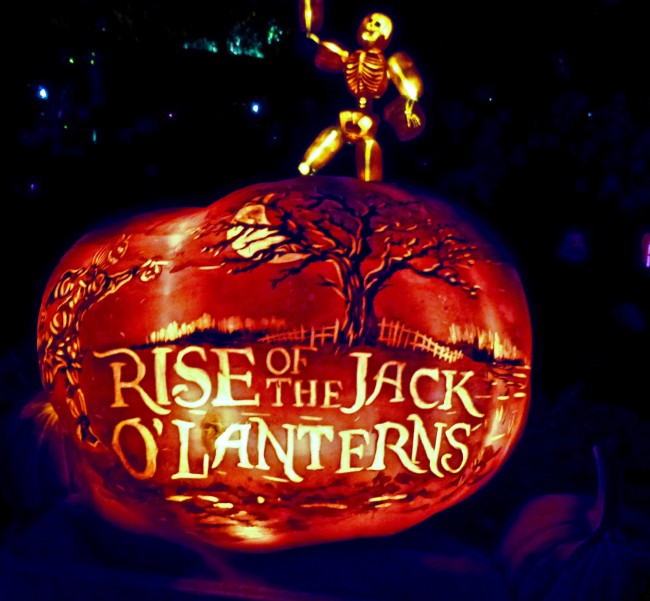 October 4, 2015 – The thought of spending an evening with a bunch of children looking at Halloween decorations would not usually equate to a fun-filled experience for me, however I made an exception last night when we visited Descanco Gardens in nearby La Cañada Flintridge.

We were there to witness the end of the first weekend of the RISE Of The Jack O’ Lanterns (yes, Halloween comes early). Despite some initial confusion where people were lining up to enter (thanks to a rather clueless worker), the event turned out far better than I expected. 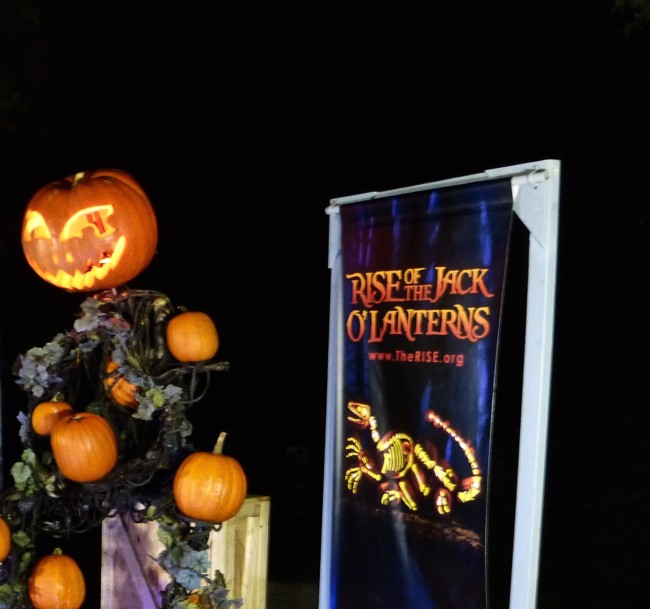 Now in its second year (I was going to go last year but spent the night in the ER after falling on my own pumpkin head earlier in the day), the RISE Of The Jack O’ Lanterns affords one the opportunity to “come see more than 5,000 hand-carved illuminated jack o’lanterns created by professional artists and sculptors arranged in creative ways along a 1/3-mile scenic walking trail…all set to an original music score produced exclusively for The RISE!”

I was able to scare up 7:15 p.m. reservations, so Tracy, Susan and I scooped up our tickets (purchased online) for this pumpkin exhibition and off we went. The RISE Of The Jack O’ Lanterns is a month-long event (which also occurs in Old Westbury, New York; Escondido (San Diego Zoo Safari Park), CA and an additional L.A. County site (Santa Anita Park in Arcadia).  We arrived at the jammed parking lot a little before 7 p.m., and when I asked where the people with 7:15 reservations should go, the information girl said, “To the end the line.”  She told someone with 8 p.m. timed tickets the same thing. It was a fairly long line, but it moved quickly. 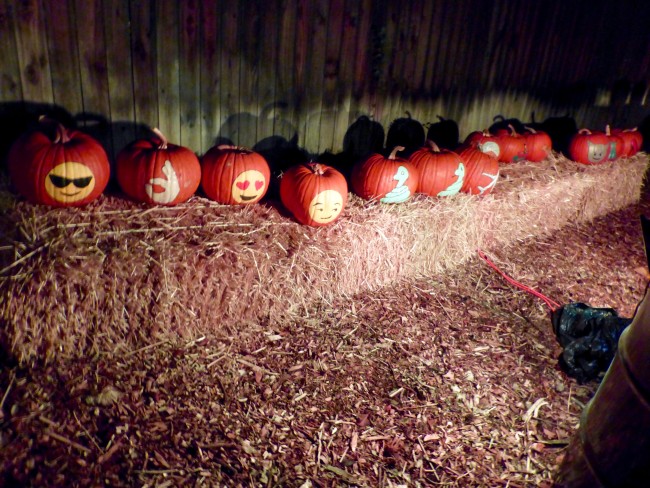 When we got near the entrance, another woman kept yelling, “7 p.m.” (which was the timed entrance they were admitting). When she saw our 7:15 tickets, she said, “Move out of line and come in when we call you.”

So, for those of you who arrive early for this event, don’t wait in the long line, just hang out near the entrance (unless you like to stand in line for no reason), and go in when they call your time slot. By the way, don’t be late…you will not be admitted after half an hour following your timed entrance.  One thing we noticed as we waited, there seemed to be a baby stroller convention (more about that after we’re inside). Some of these kids were no more than three-months old, so I’m sure the memories will be vivid later in life. 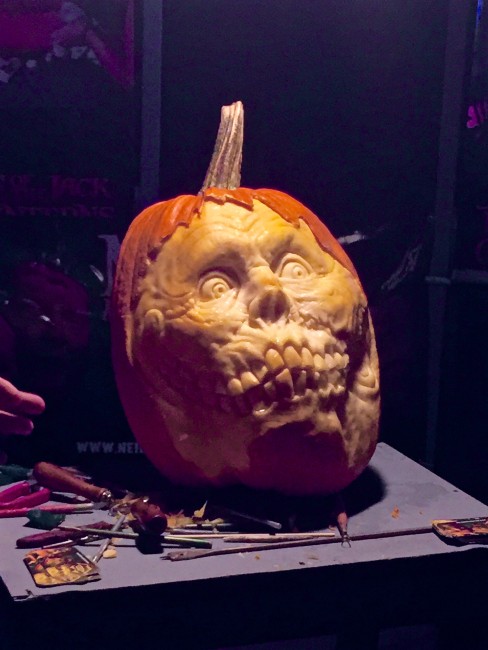 At 7:15, we entered and started on our 50-minute journey through “Pumpkin Land.” First, we came upon a gentleman giving carving tips. His designs were way above my smiley faced pumpkin level, so we moved on after watching him work his pumpkin magic.

Then we came upon some super heroes… 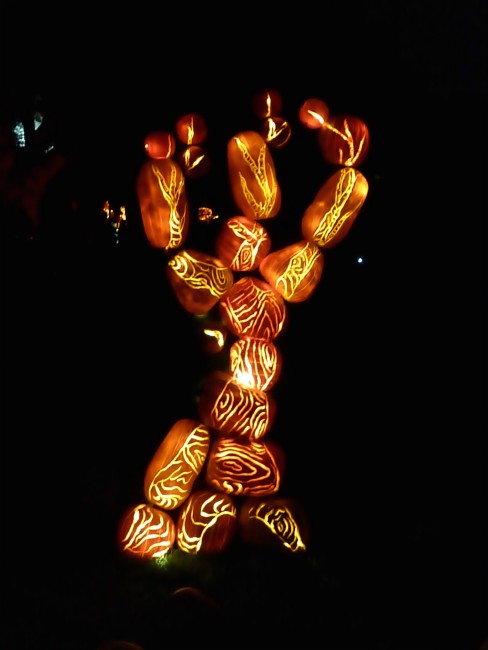 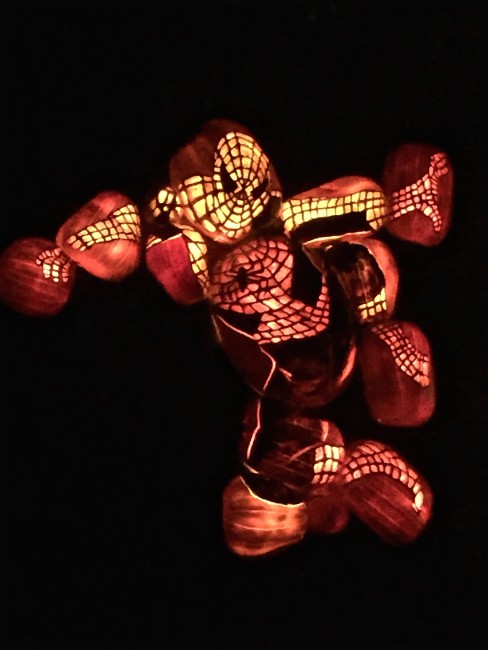 And yes, he has his own web site. 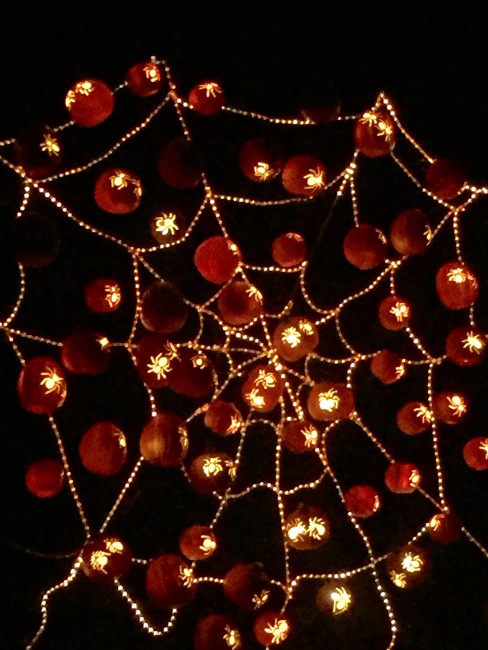 Next, we found ourselves in The Game Of Thrones… 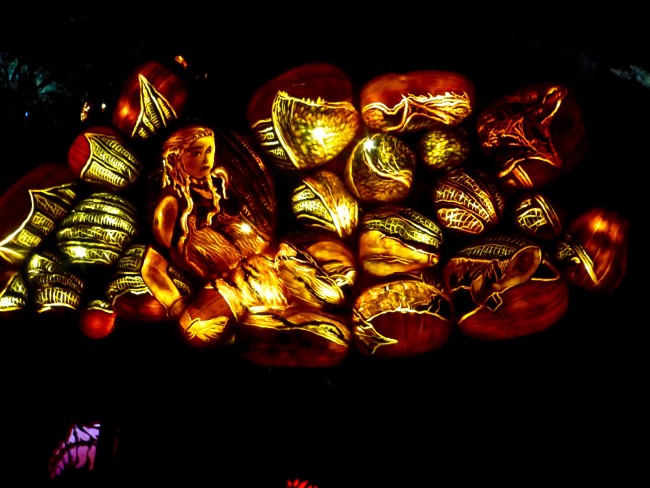 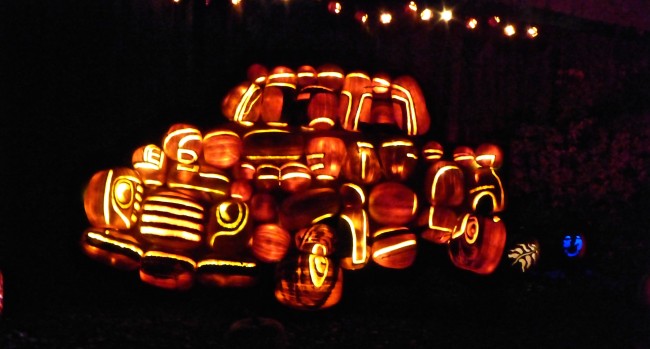 Along the way, we saw some classic cars… 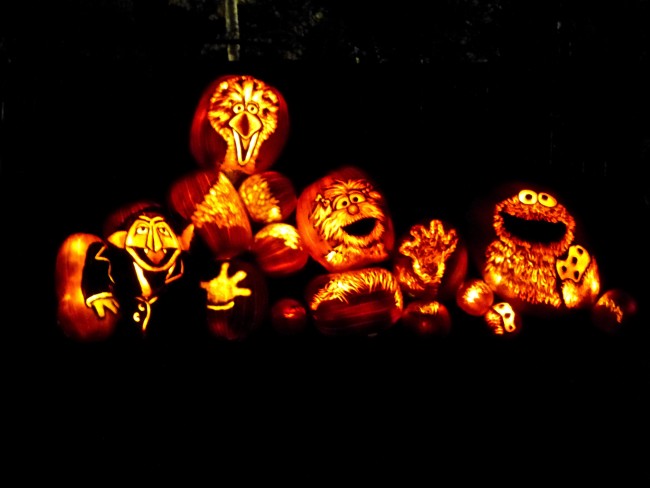 …and even the Muppets. 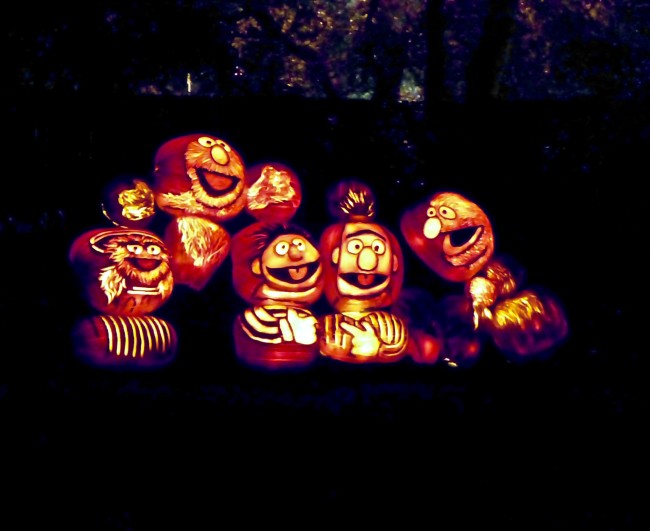 No one had to crane their neck to spot the giraffe. 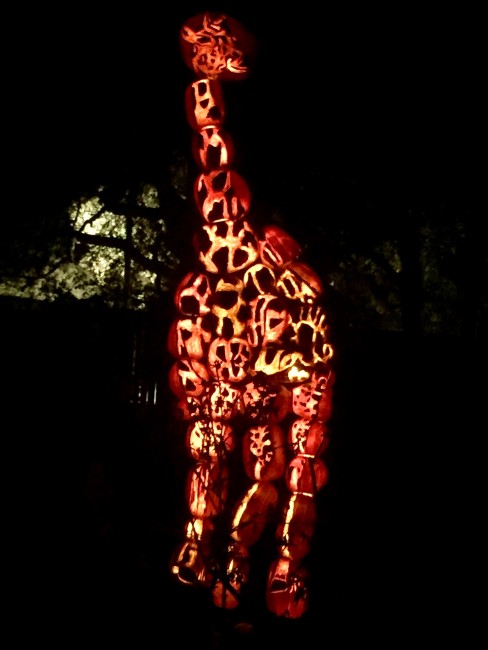 Knowing that these were all hand-carved pumpkins made this a fascinating array, even as strollers and wagons carrying little kids threatened to cut our legs off at the knees every five minutes or so. I would have hated to fall at a pumpkin exhibition and been squashed. 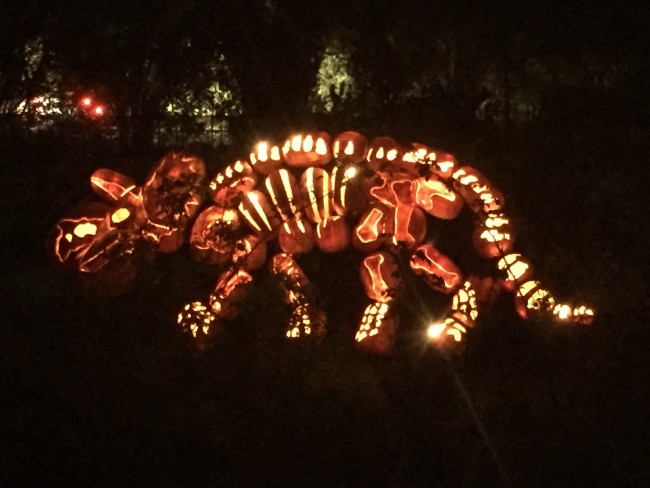 Meandering through the displays we found ourselves at a mini-Jurassic Park, with Tyrannosaurus rex, Brontosaurus and Triceratops roaming the area. 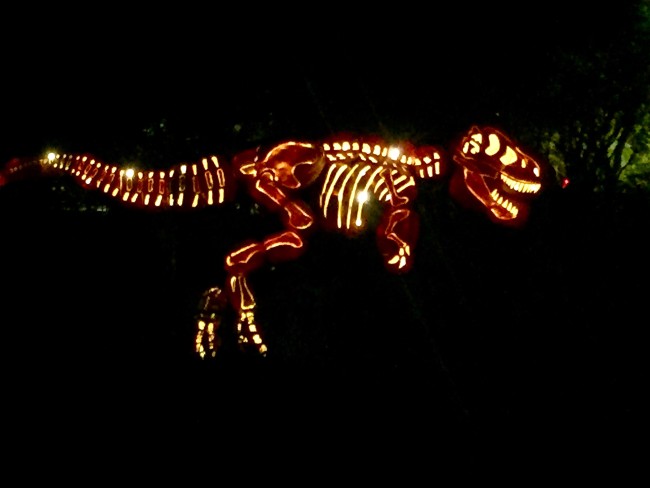 By far the most frightening of all the pumpkins were the ones of Donald Trump and Hillary Clinton. I think there was also one of Mike Huckabee, but it was too far to the right to get in the photo. 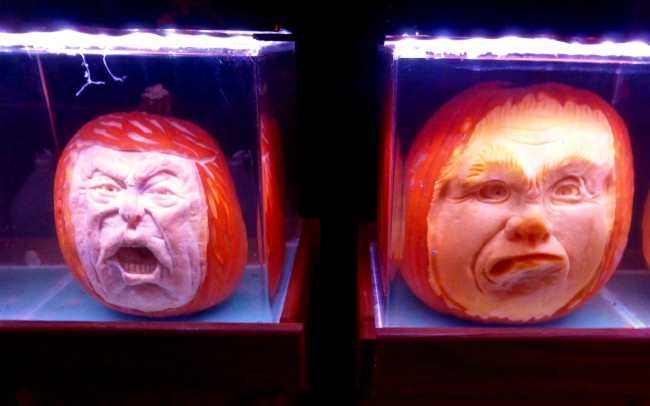 SpongeBob was there with his crabby friend (no, I have never seen an episode). 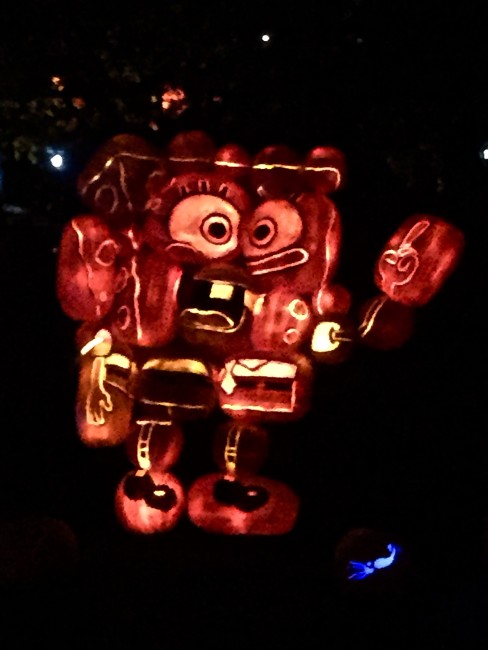 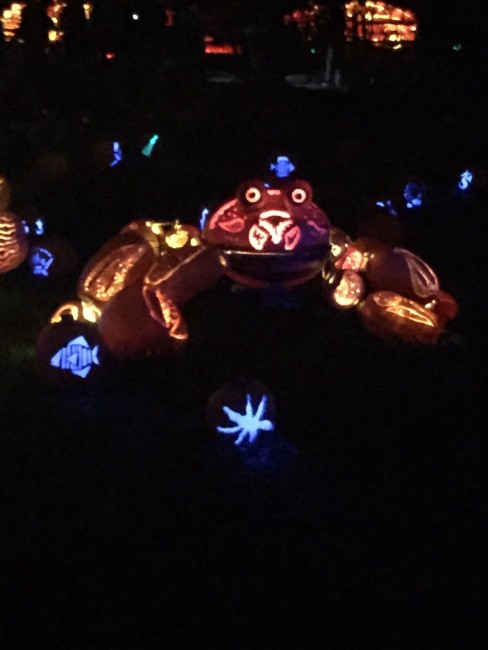 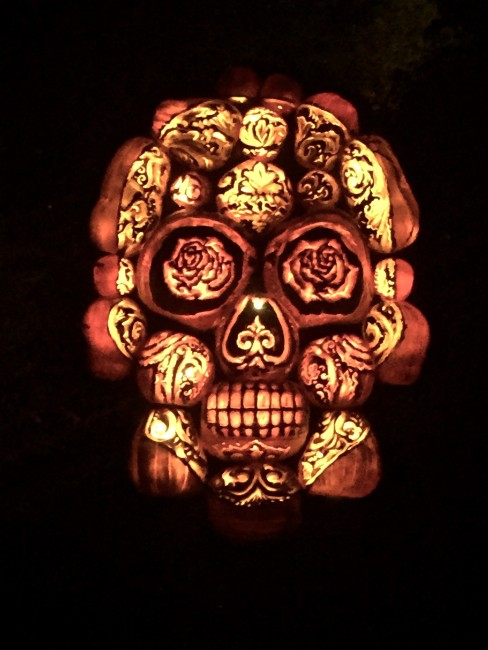 Before leaving, I nearly took a header when some woman with a kid riding in a wagon tried to flip me into a dragon’s lair complete with a 50-foot long dragon. 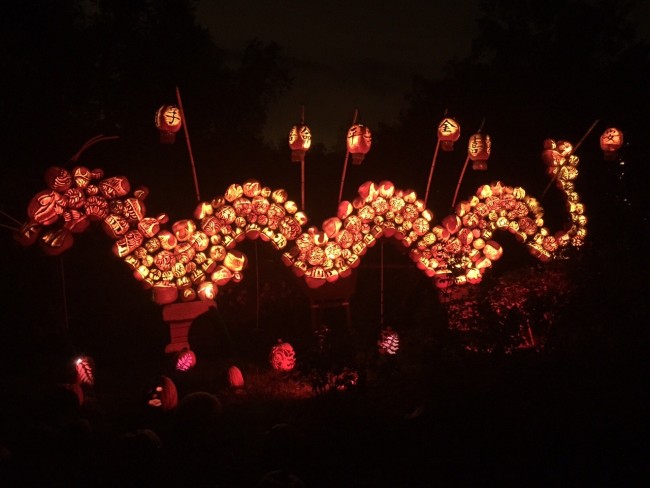 We bid goodbye to tigers… 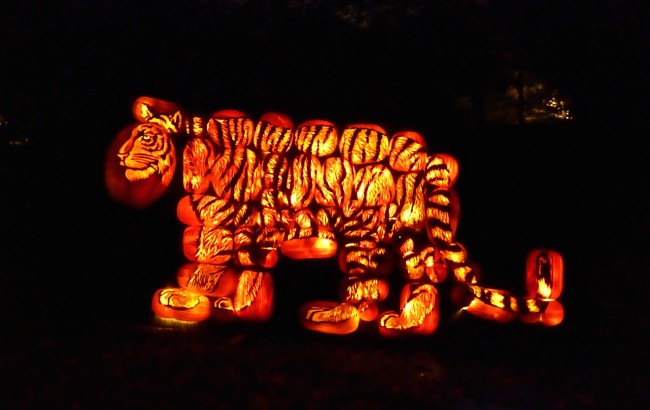 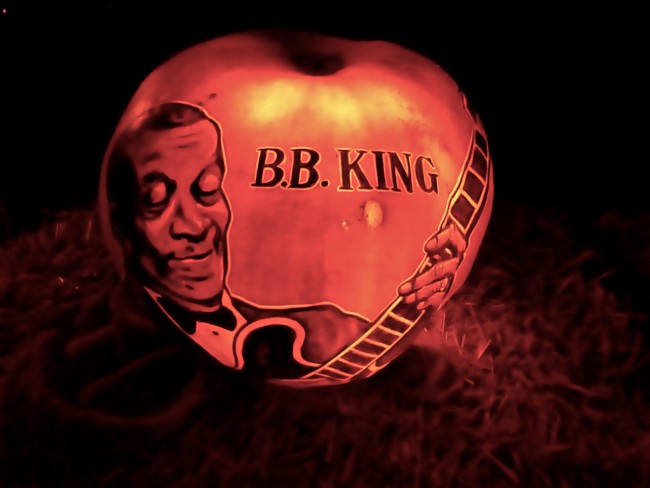 I was rather sad there was no mathematical exhibition, but I guess one should not expect Pumpkin Pi at something like this. 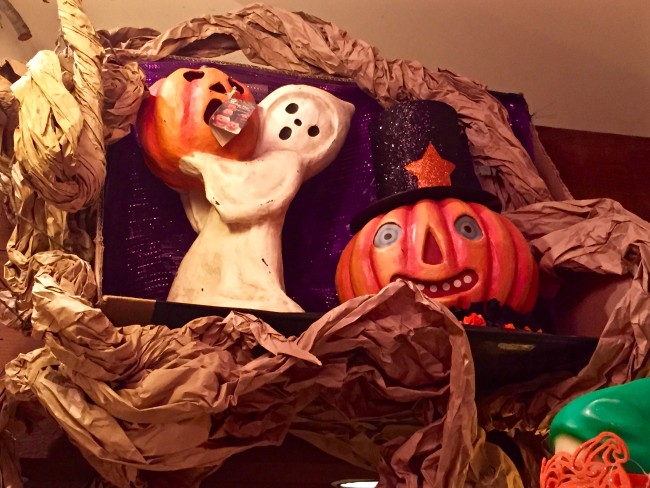 We were out of there in less than an hour, and fortunately the gift shop was so packed we didn’t purchase anything. 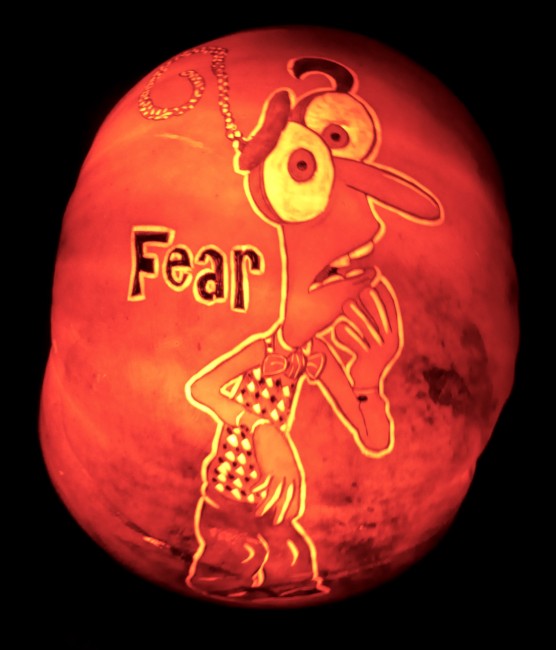 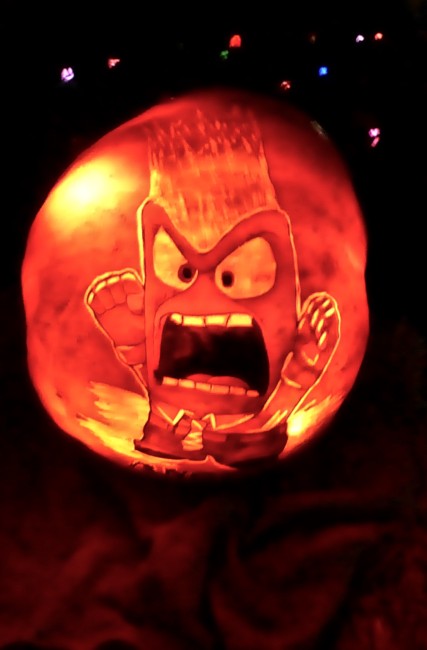 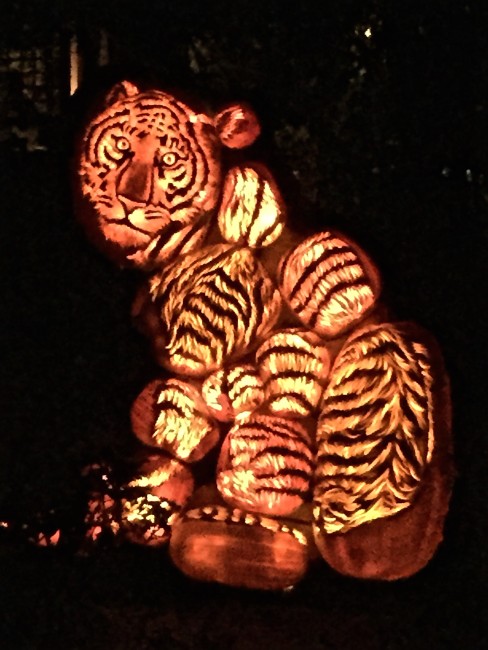 …but I will admit we had a good time. It’s open Thursday through Sunday evenings and ends November 1. On Monday through Wednesday, experts replace the pumpkins that have gone bad. I guess you could say they’ve carved out a niche during this time of year.

There are refreshments (including wine) at the beginning of the route.

The RISE Of The Jack O’ Lanterns is a perfect place for parents and grandparents to spend time with the kids. Just watch out for those pesky strollers!

FACTS:
RISE Of The Jack O’ Lanterns
Tickets range from $22 – $30
Check website for hours/days/details in your location
Runs through Sunday, November 1
Website: www.therise.org