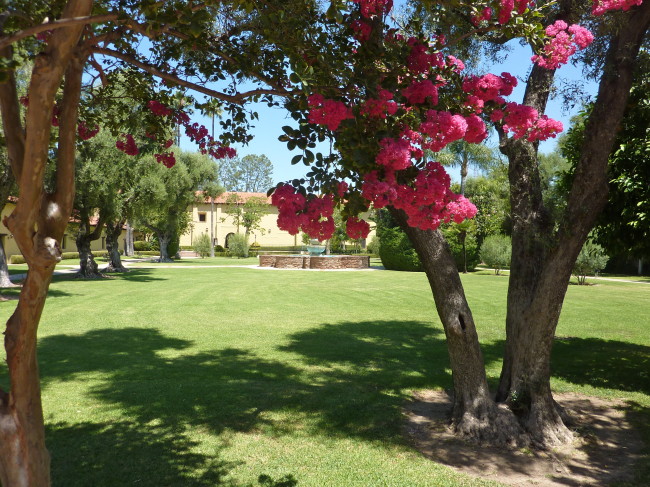 It was our third straight Sunday in our relatively newfound quest to visit all 21 of California’s Missions, and today Tracy and I were on our way to visit our third Mission in as many weeks, the Mission San Fernando, Rey de España, which was founded on “The Feast of the Birth of Mary,” September 8, 1797. After visiting Mission San Juan Capistrano last weekend, we thought the next Mission would be quite a letdown. Boy, were we surprised! 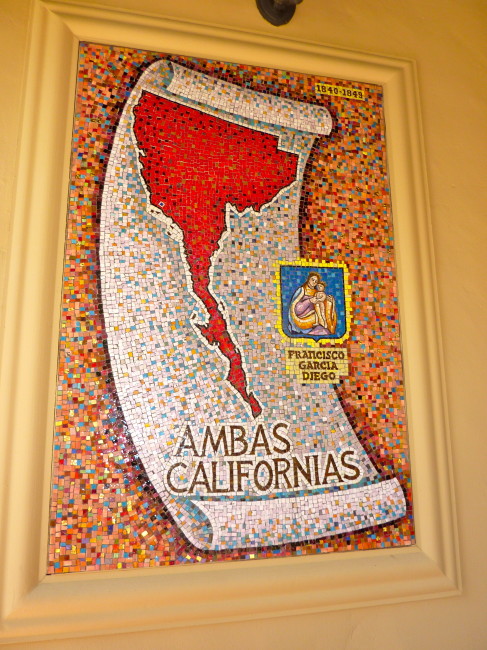 Not only were the grounds pleasant to walk around, but the Mission San Fernando, Rey de España has a plethora of historical artifacts and interesting relics, not to mention the tomb of one of America’s comic icons. Who knew? And after our tour, there was another Mission surprise just around the corner. I only wish I had known earlier about it.

We paid our four dollar entrance fee, picked up our Mission Cheat Sheet, and it was time to roam the grounds of this Mission, the fourth to be founded by Father Fermín Lasuén in the span of four months in 1797. Busy guy. It was named for Saint Ferdinand III, King of Spain in the 1200s.  This one also happened to be located near the first gold discovery in Alta California.  It was the 17th of California’s 21 Missions. 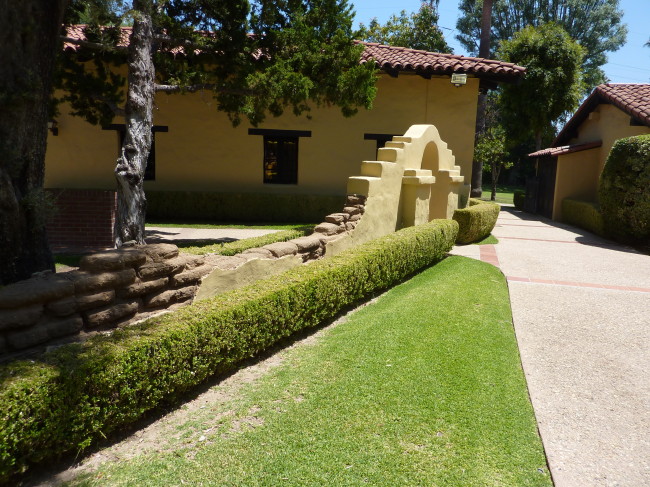 The first stop on the self-guided tour took us to an exhibition that includes a pictorial history of the mission, pottery, trade and commerce items. Walking outside, we walked under a small archway that led us to the Mayordomo’s House. 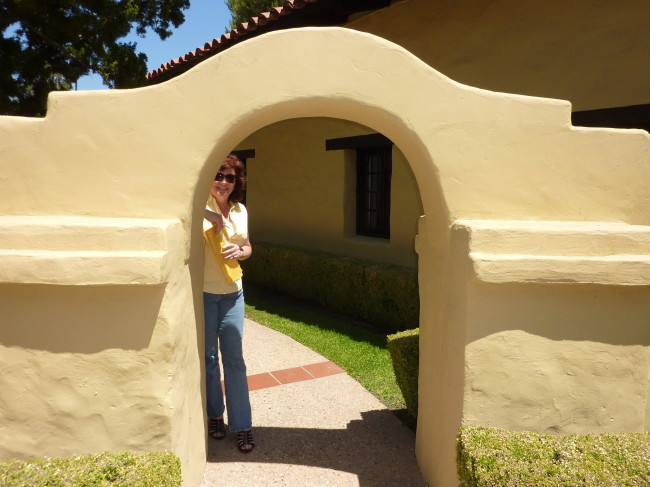 We were told that the archways were not built tall because both the Native Americans and Spaniards were quite small. I guess the Pau Gasols of Spain weren’t yet in the genetic pool.

The Mayordomo’s House is where the foreman of the Mission ranch resided. 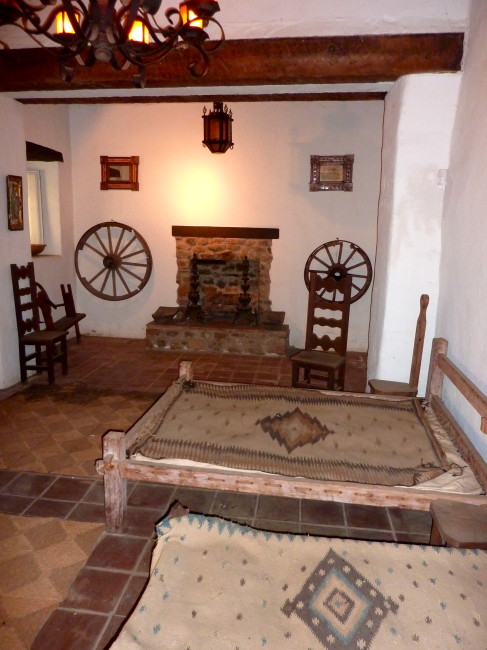 Our next visit was to the Convento, which took more than 13 years to build. This was quite a find, and Tracy and I were amazed at the preservation work that had been done to renovate the rooms of the Convento. Included among the artifacts are the oldest organ in North America. 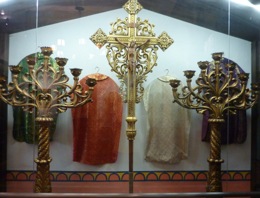 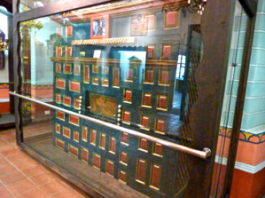 As you can see, the rooms have been meticulously restored. 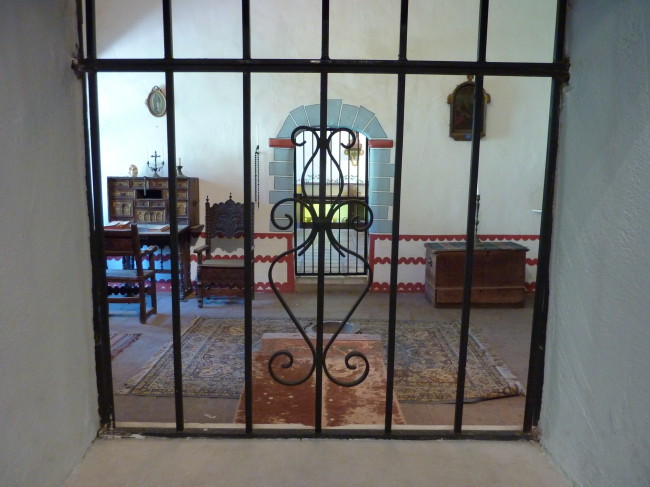 I imagine these restorations cost a chunk of change. 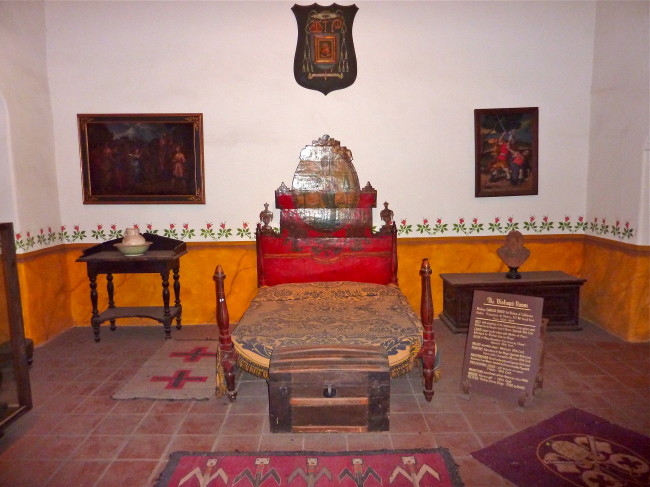 We ducked into the next room. No, literally, we had to duck! 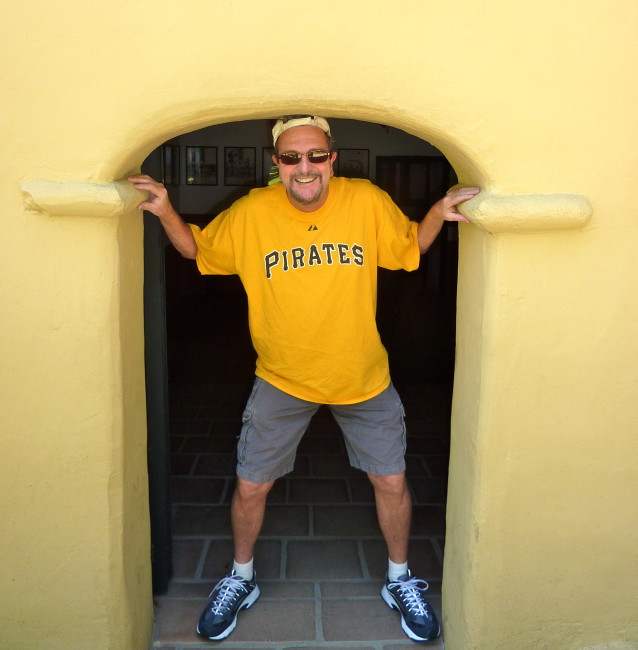 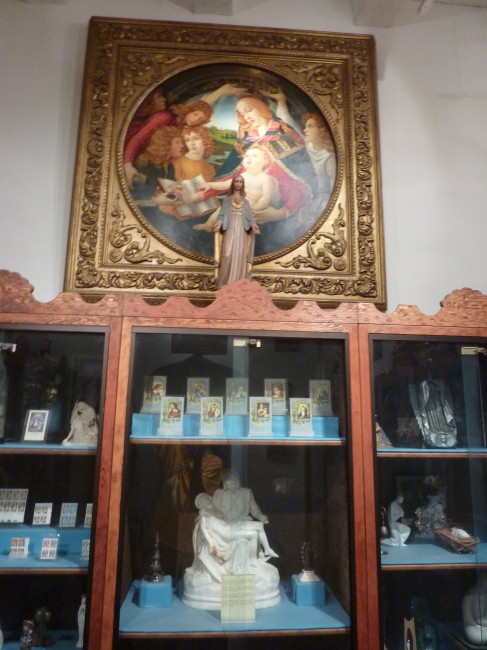 Madonnas Gone Wild, or simply The Madonna Room as they call it, is a place where Mary is everywhere. And I mean everywhere. I felt like singing Along Comes Mary. 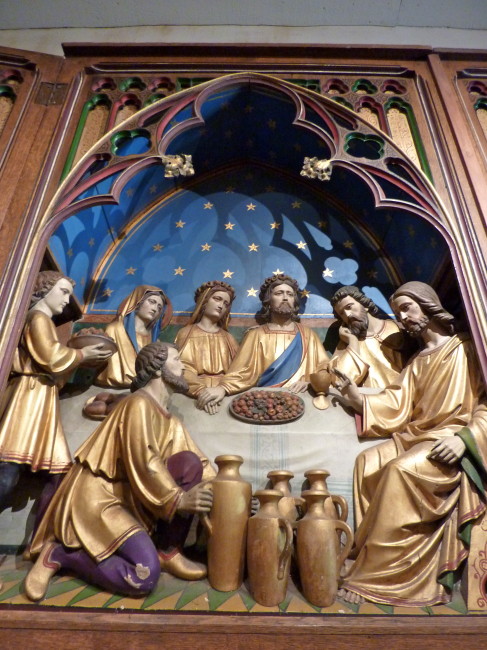 Contained here are several hundred statues, paintings, and depictions of the Madonna. This room had previously been a prison before it had been refurbished and opened to the public in 1992.

There was a replica of an old Wells Fargo stagecoach in one room, and a beautiful altarpiece in another room. 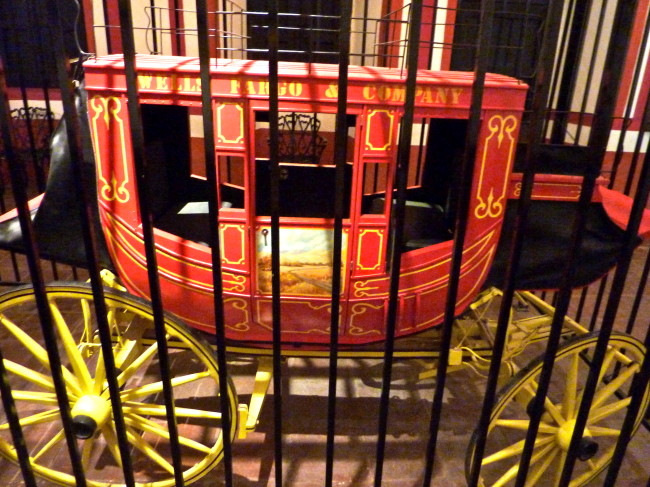 Back outside, we walked past the statue of Father Lasuén and strolled through the West Garden and saw the back The Old Mission Church. The door was locked. 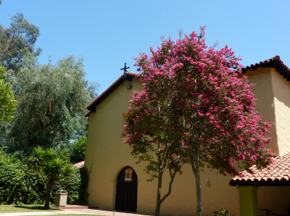 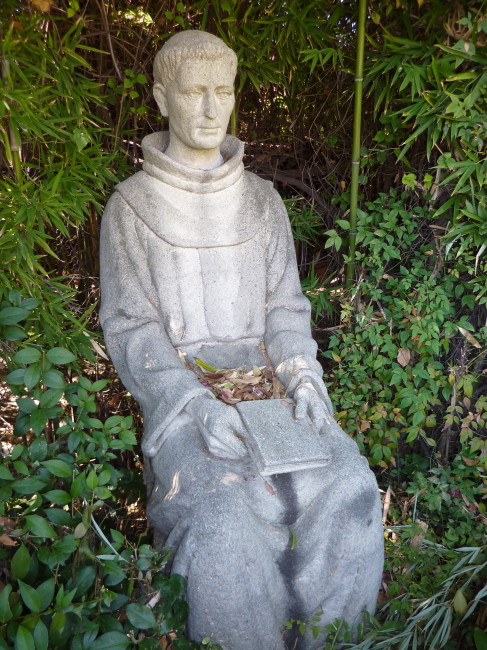 It was then time to go through a passageway to the open courtyard in the East Garden that had a beautiful flower-shaped fountain in the center. Bullfighting used to take place in this area. I suppose they use a Toro mower to cut the grass today in honor of that tradition. 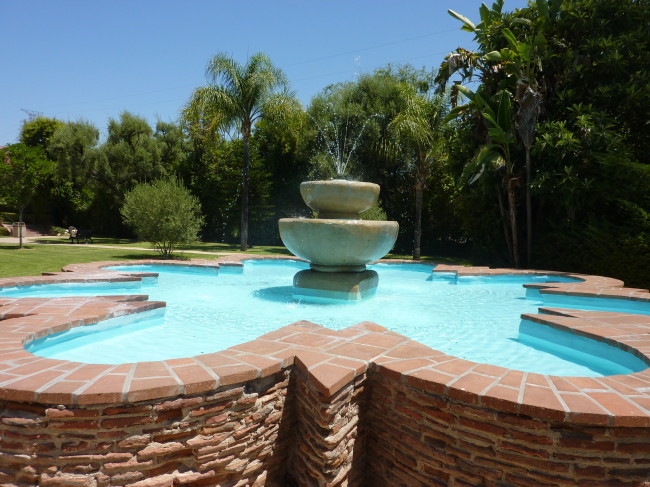 After walking through the East Garden, it was time to enter the Old Mission Church, a building whose floor was dug up by prospectors in the 1840s after gold had been discovered nearby. The digging went on for centuries. The day we visited it was too dark for photos, so these (below) are from the Internet. Pope John Paul II visited here in 1987. 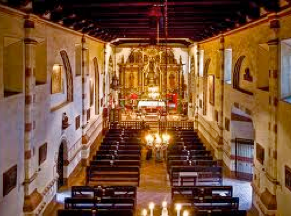 Going out the other door, we found ourselves in the Camposanto (Cemetery). 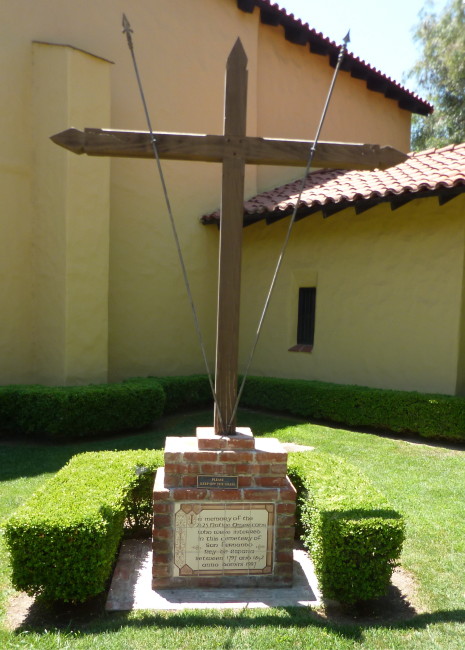 In July of 2005, comedian Bob Hope’s remains were transferred from a temporary crypt at the nearby San Fernando Mission Cemetery (if only I had known how nearby) to the Mission San Fernando, Rey de España. The Bob Hope Memorial Gardens were created, and it is here where Hope’s final resting place is located. People asked why Hope was buried here, and it was all because of Hope’s wife, Dolores. She chose the Mission for her husband’s burial place because she said that Hope loved the San Fernando Valley. The grotto in the crypt includes a bronze sculpture replica of The Holy Family Resting – Flight into Egypt, by Anna Hyatt Huntington. 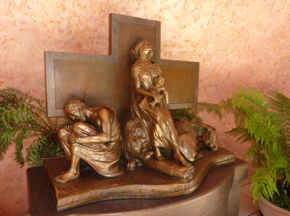 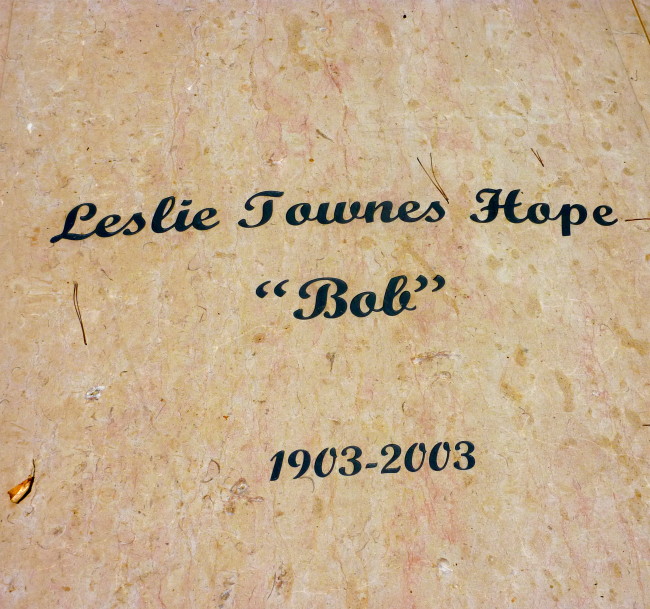 Before entering the garden, we passed by the Our Lady of Hope statue, a replica of a famous 17th-century sculpture of Mary at the Basilica of Our Lady of Hope in Pontmain, France. The statute was said to be a favorite of the Hope family. 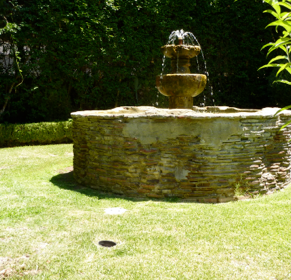 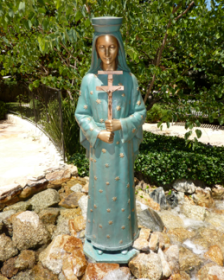 Tracy and I were impressed by how well the Mission San Fernando, Rey de España has been restored through the years, and we left thinking our visit was complete. However, when I was on my computer later in the day, I found we had missed something. 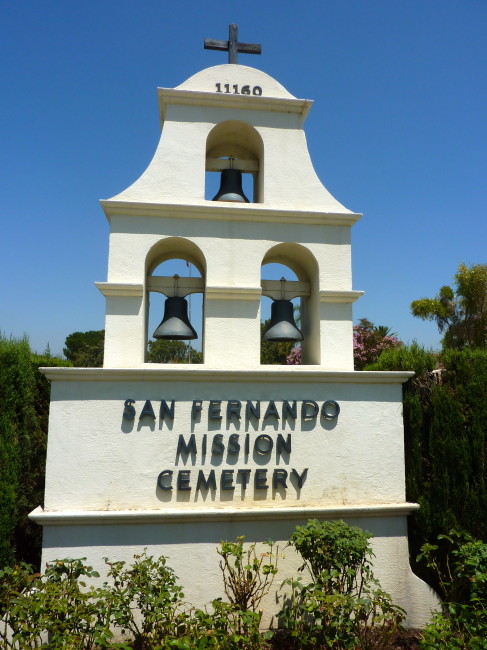 Just around the corner from Mission San Fernando, Rey de España is the San Fernando Mission Cemetery, home to some big names in the entertainment industry. Since my office is pretty close to the cemetery, I made a quick visit the following day. 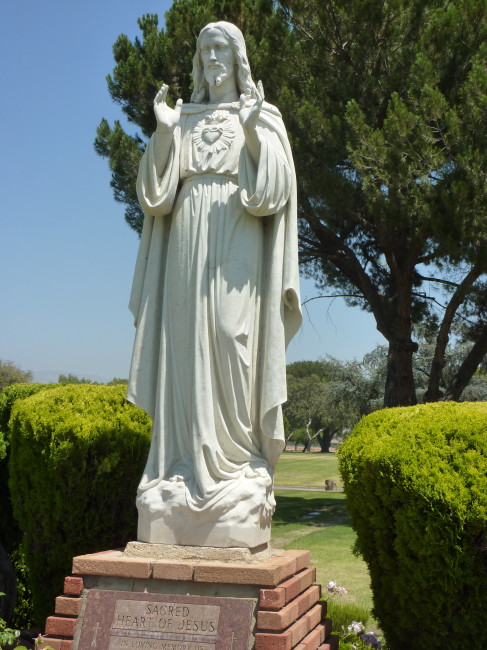 Buried here are such Hollywood stars as Chuck Connors (The Rifleman), William “Fred Mertz” Frawley, Walter Brennan and two others who I decided to pay “visit.” 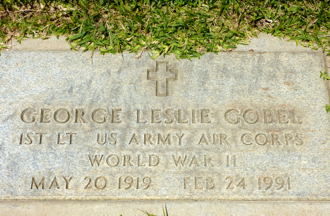 The first grave I spotted was “Lonesome” George Gobel, who I always remember for his great quote on The Johnny Carson Tonight Show. Following appearances earlier in the show by Bob Hope and Dean Martin, Gobel quipped to Johnny, “Do you ever get the feeling that the world was a tuxedo and you were a pair of brown shoes?” Classic! 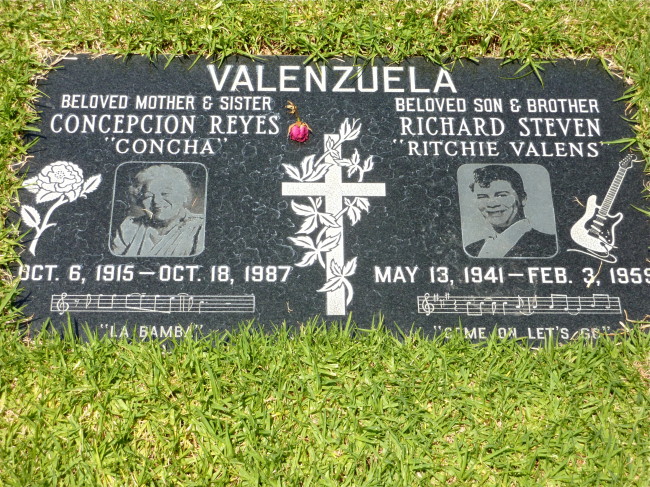 I next stopped by to pay respects to Richard Valenzuela, better known as singer Ritchie Valens, who is buried next to his mom. It was a blistering hot afternoon, so I decided to leave before I joined them six feet under. Both the Mission San Fernando, Rey de España and the San Fernando Mission Cemetery make for an interesting stop if you are visiting Los Angeles or if you live here and have a free couple of hours to spend. And don’t worry, I didn’t see a dog even though the Mission entrance says to beware of one. 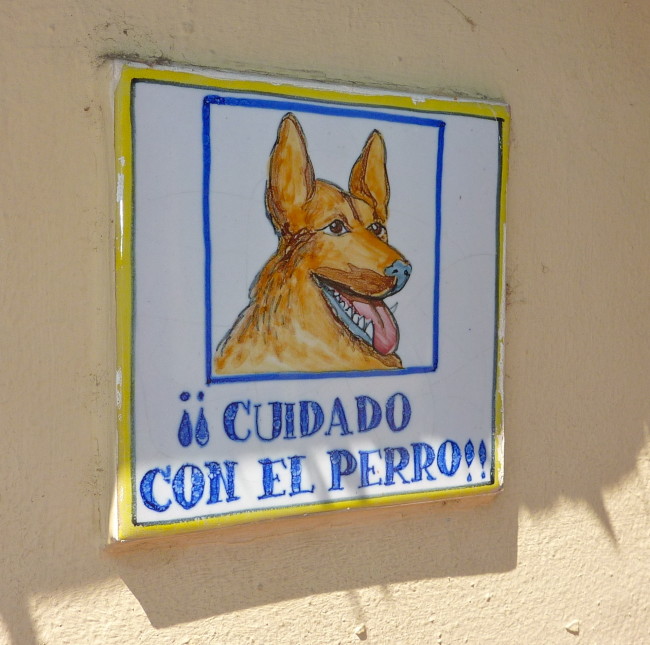 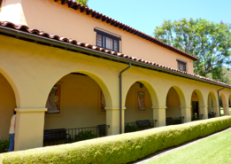 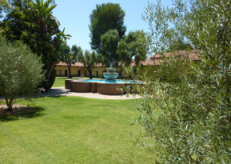