King Of The Missions 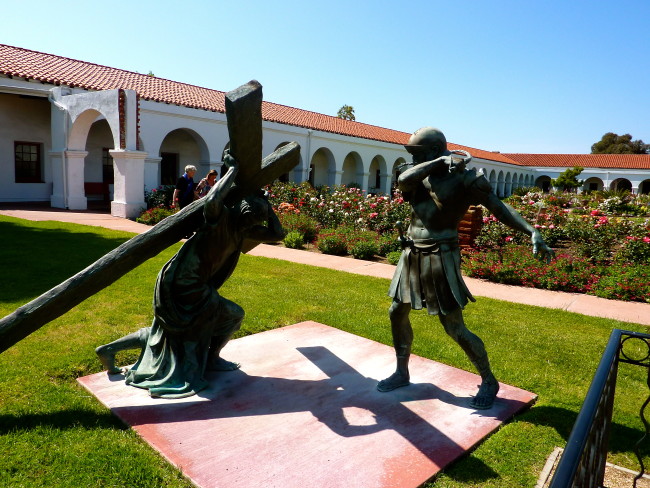 After our initial burst of three California missions in three weeks, Tracy and I finally got back on the road the last weekend in April to visit the two San Diego County missions.  We stopped and picked up our friend Mary, and it was on to the Misión San Luis Rey de Francia in Oceanside. 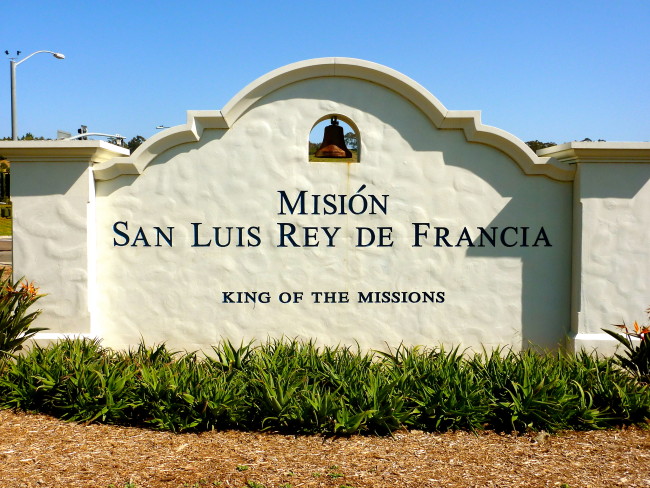 It was a beautiful, but rather windy, afternoon when we visited, and there were only a handful of people who had the same idea. The mission was founded on June 13, 1798 by Padre Fermin Lasuén, who was the successor to Junipero Serra.  Prior to Spanish occupation, the Luiseno Indians inhabited this area for hundreds of years. 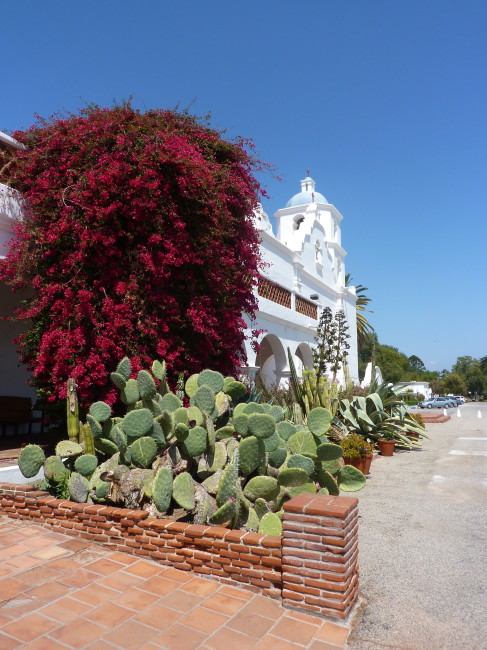 Between 1798 and 1831 the mission became home to approximately three thousand Indians.  It became the largest of the missions established in Alta California, which is why it is dubbed, “The King Of Missions.”  The Mission was also named after St. Louis IX, King of France, but I guess they decided against King King Of The Missions. 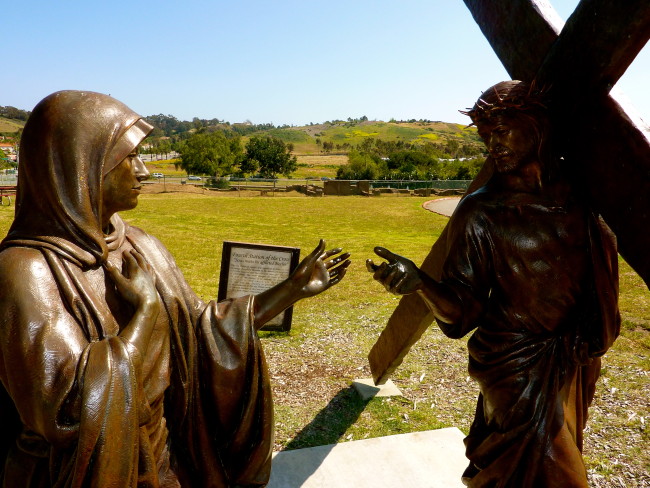 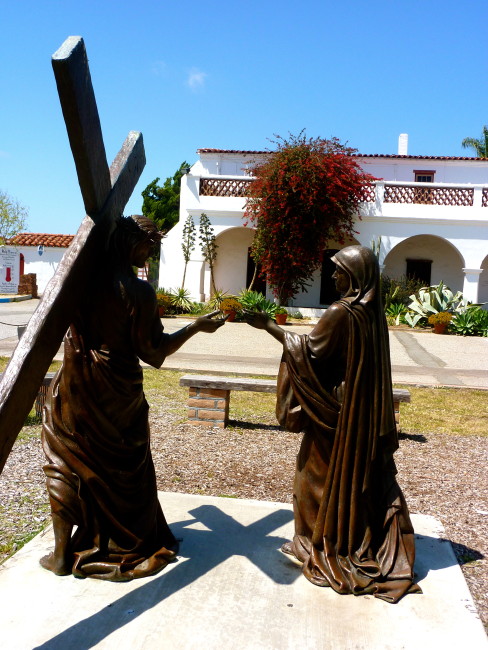 After paying our five dollar admission fee, Tracy, Mary and i started on the self-guided tour (no photos inside). We visited the Founders Room, where there are artifacts of Native Americans who lived here (photo is from Mission website). 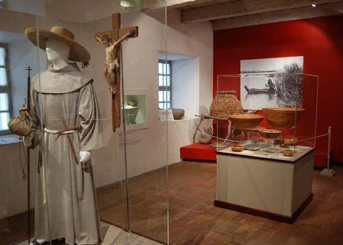 We skipped the video and went out to the Peyri Court, which was once the private courtyard for the friars.  The fountains at that time provided them with drinking water and medicinal herbs. 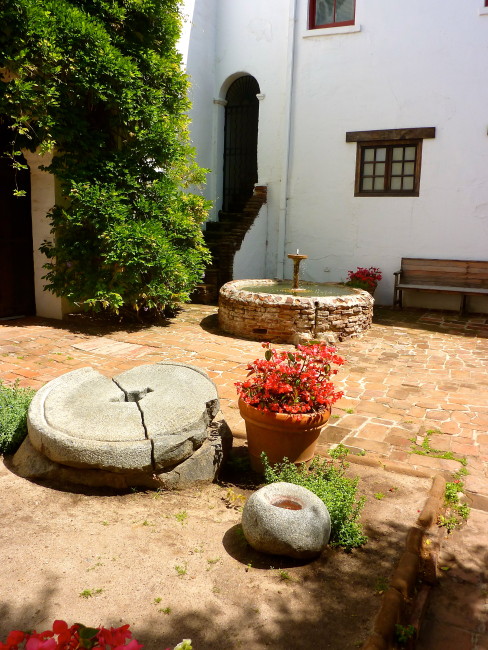 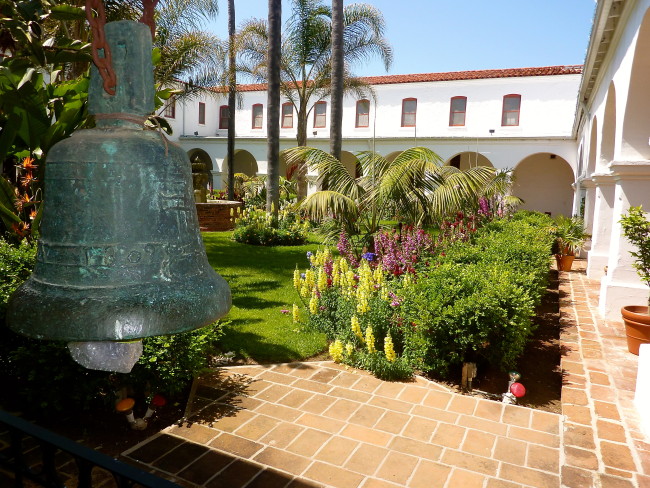 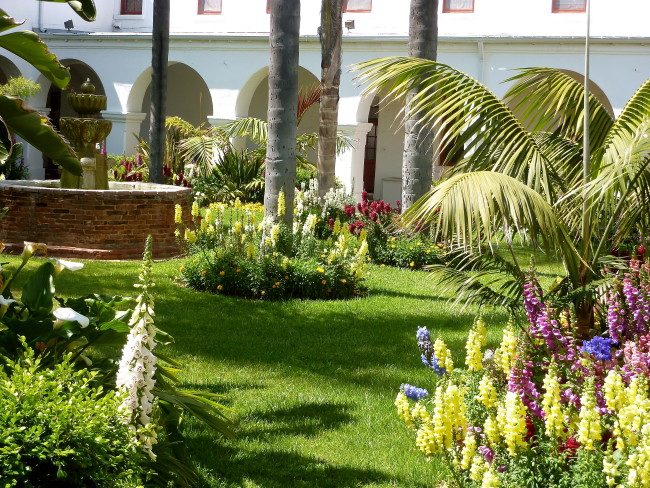 There are beautiful arches constructed of tile brick covered with a plaster frame. Rooms open up to this walkway, and he Friary is above the gardens. 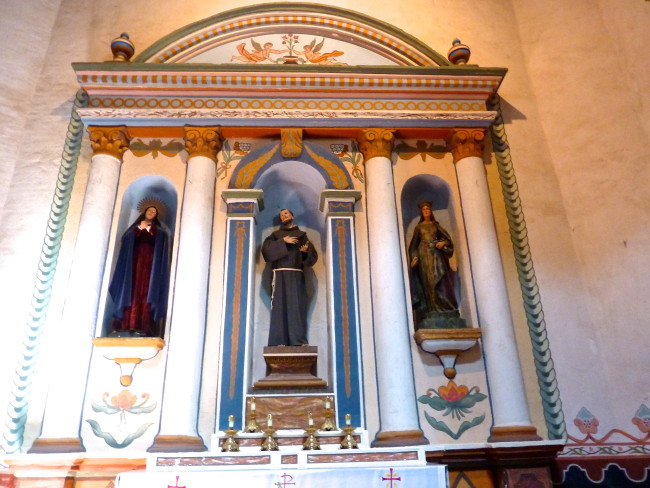 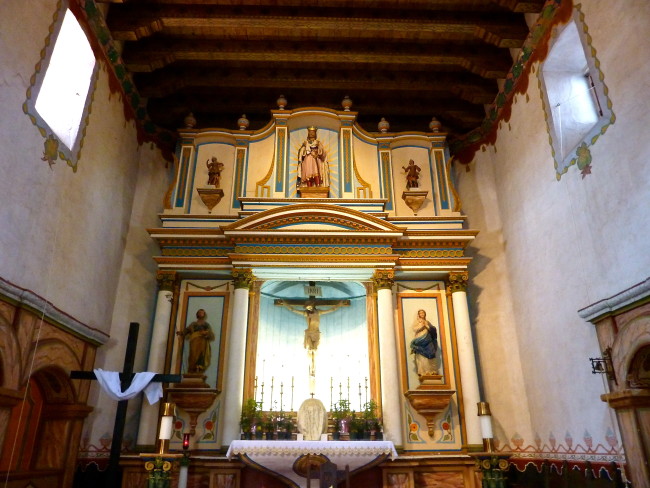 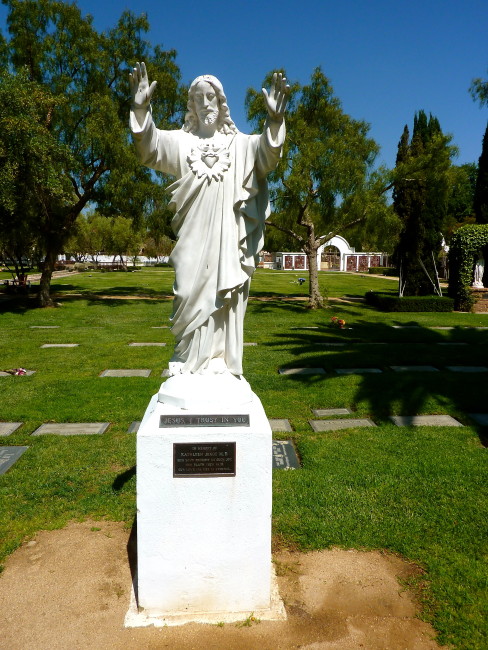 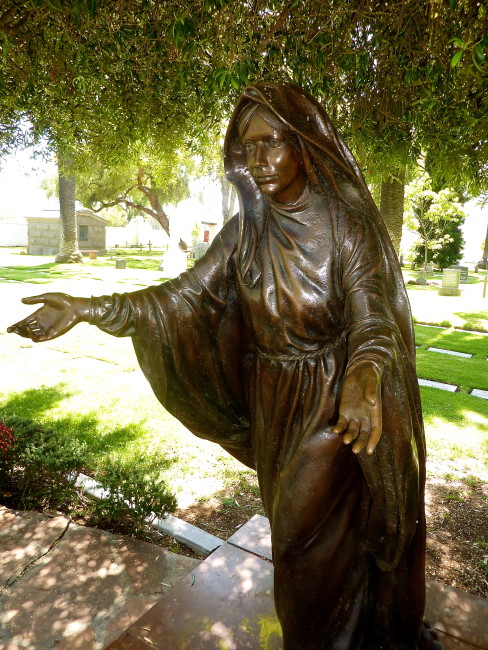 Fresh air awaited us upon our exit, and fortunately we were fresh out of Madonna jokes.  Our next stop was the Historic Cemetery.   We saw statues of Jesus and Mary (above), and the In Honor Of our Lady Of Lourdes statue (below). 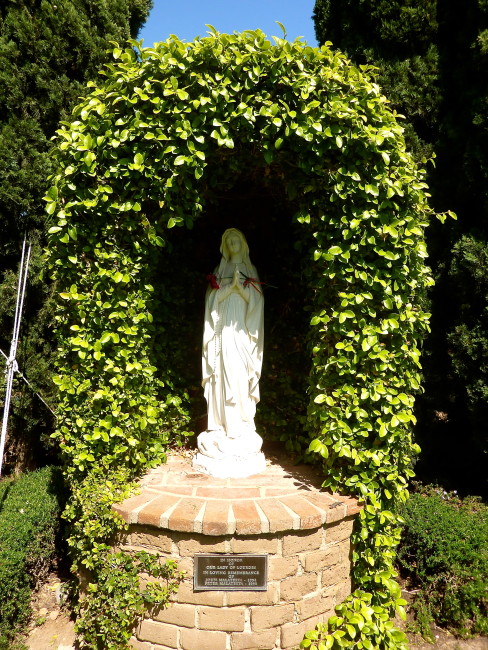 It is the oldest cemetery in North County San Diego still in operation. 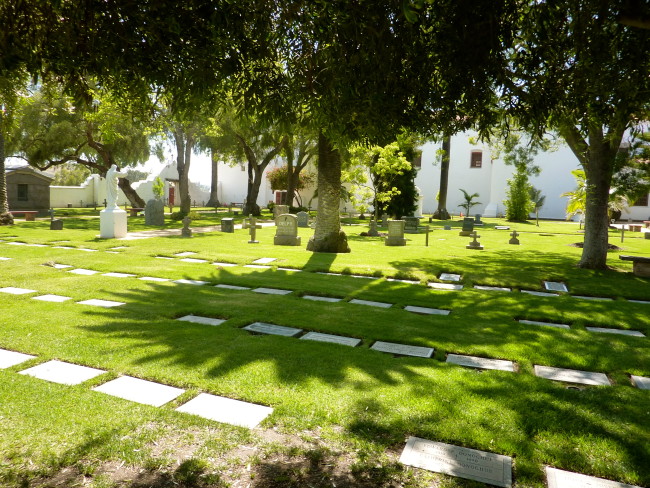 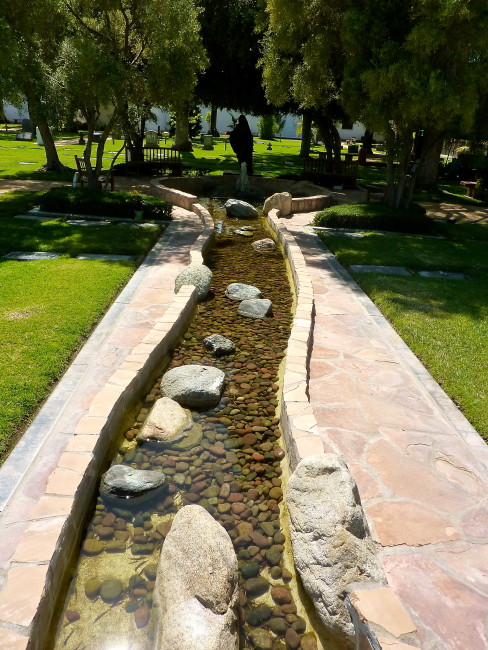 We then doubled back and found ourselves at the Quadrangle… 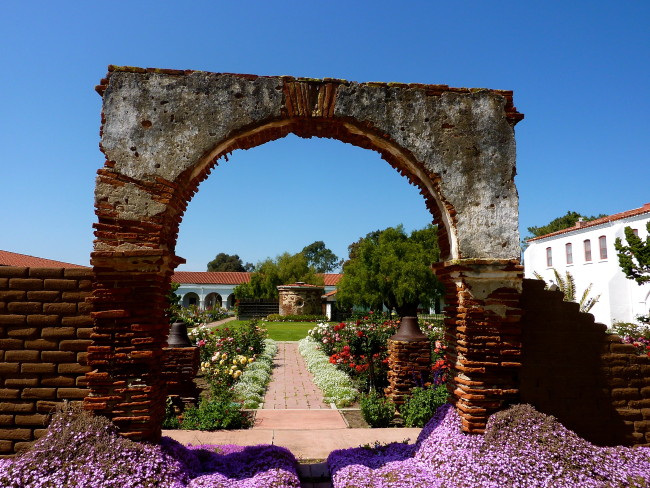 …a four-sided patio surrounded by buildings that has a beautiful entry warch. 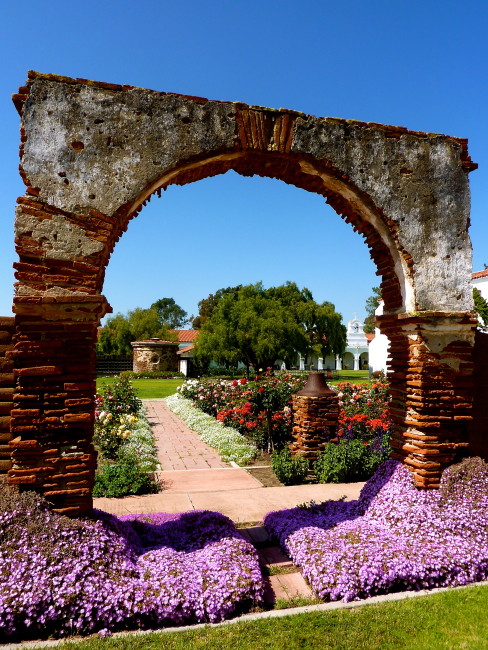 The mission is used as a retreat… 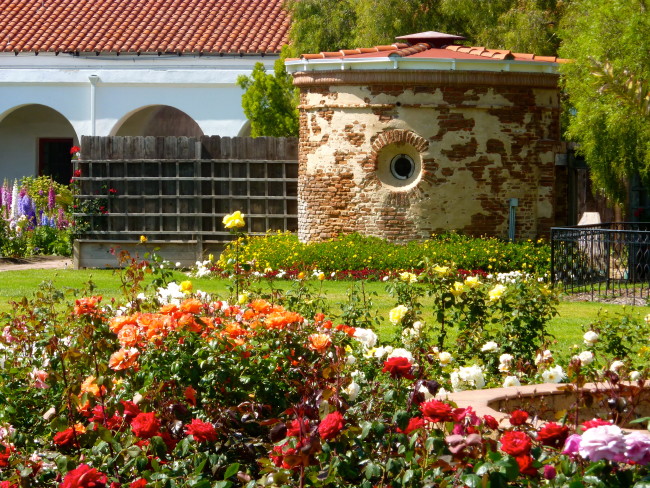 …and only people who are on the retreats or the Friars are allowed to be back there.. 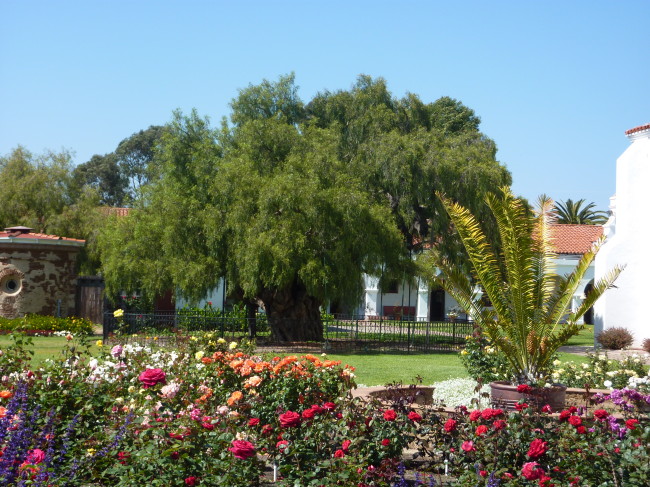 The Quadrangle is also home to the oldest Pepper tree in California. It was planted in 1830 by Father Antonio Peyri, who was in charge of the mission from 1798 until 1832. He received the seeds from a sailor from Peru. Some of the branches of the tree are now supported by tall stakes.

There is also a Station of the Cross in the Quadrangle (above). 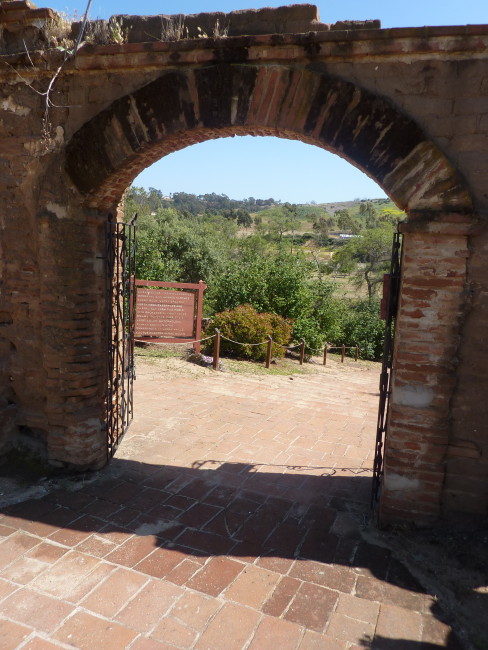 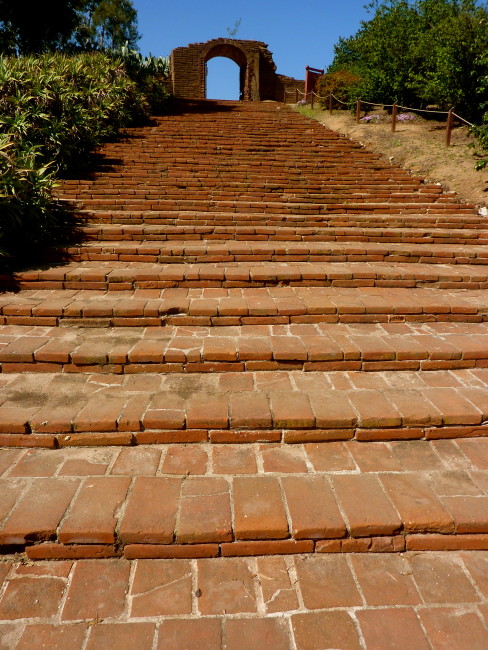 Walking through the gift shop (where Tracy bought a lovely plant), we were directed away from the Mission, not because we did anything bad, but because there was still more to see a couple of hundred yards away. 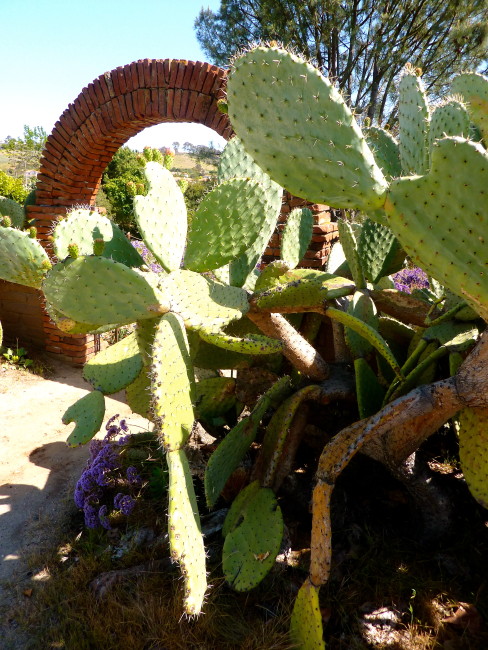 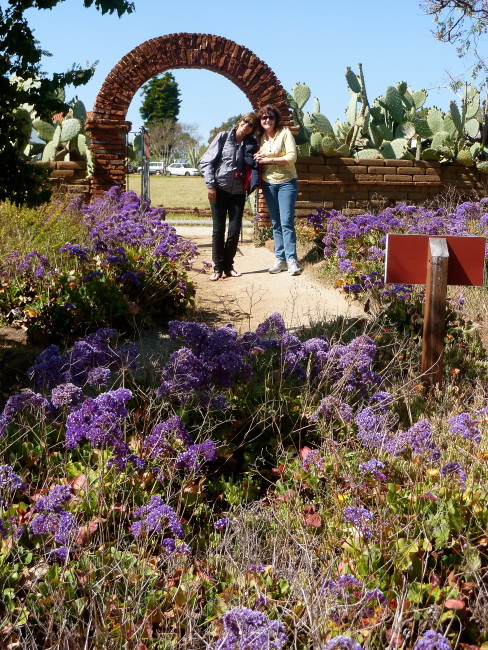 A covered archway awaited us and we walked down some steep stairs toward the Lavanderia, which was the “elaborate laundry” where the Mission members bathed and washed their clothes. 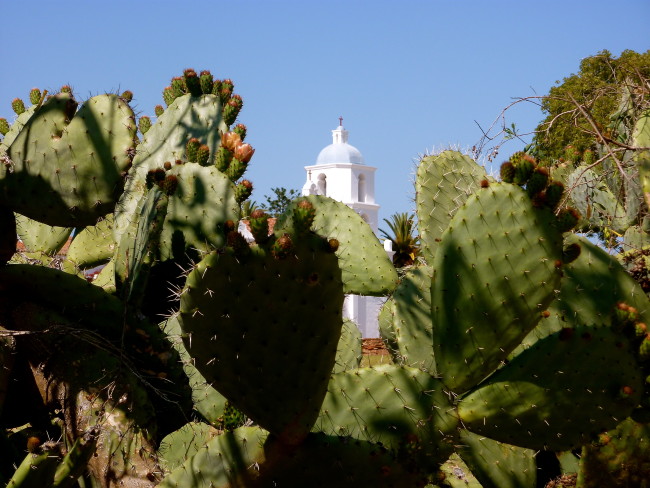 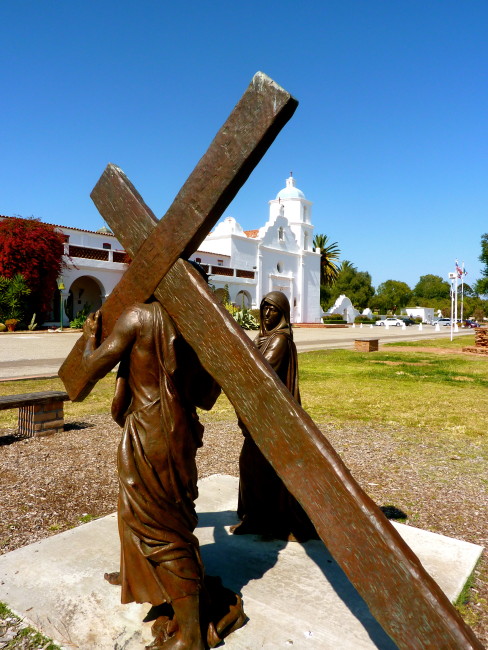 Back up top, at the Kiln Overlook, there was cactus and flowers which made for some interesting photos.  There was also another Station Of The Cross. 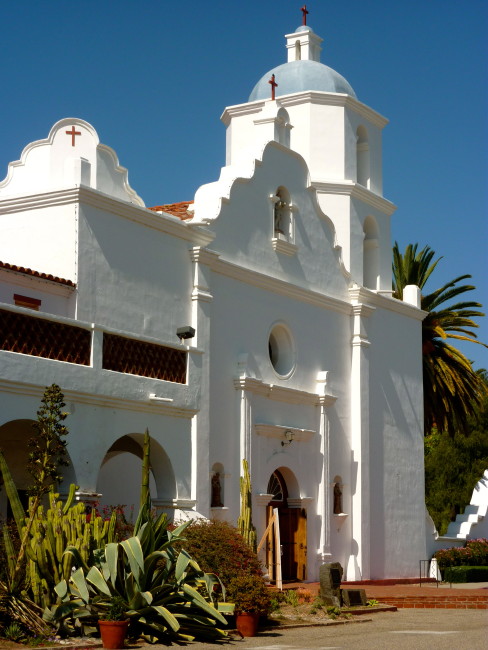 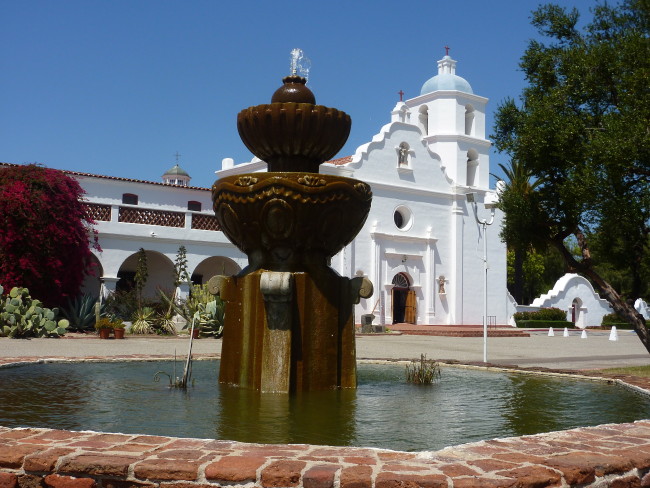 Misión San Luis Rey de Francia was another surprise in our Mission Quest, as I had not heard too much about it, but the grounds were beautiful and well-maintained.  Only 17 more to go!! 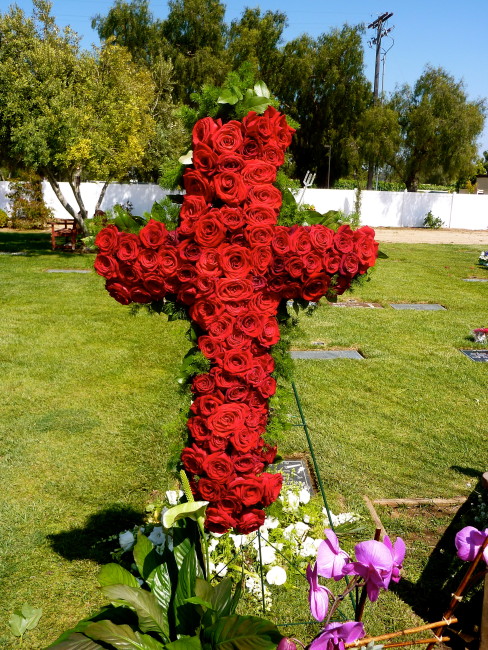