Worthy Of An Encore 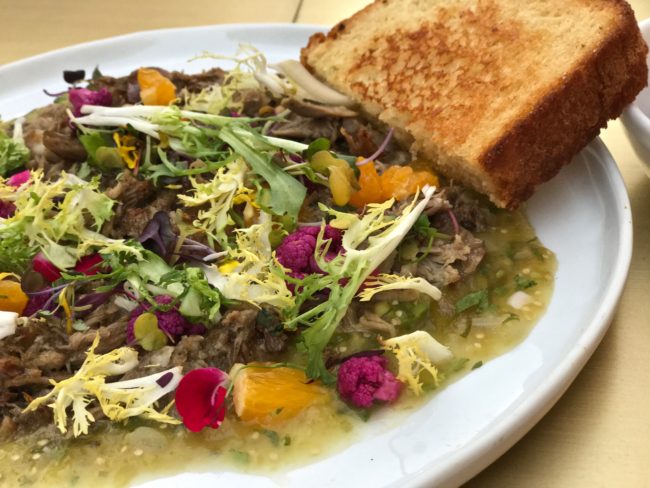 Tracy and I realized we had been on an Italian restaurant kick lately, so it was time to head south of the border (well, it is south of our house in Pasadena) and investigate a relatively new establishment that touts its inventive Mexican cuisine.  Maestro opened earlier this year in what was the former Azeen’s Afghani Restaurant (loved that place), located about a block from one of our favorite Italian (can’t escape them) restaurants, Union.

Maestro comes from the creative mind of chef Danny Godinez, who was born in Acapulco and has opened a few restaurants in Orange County. He decided to enlarge his mini-empire to Pasadena, incorporating and expanding upon ideas from his two OC restaurants. 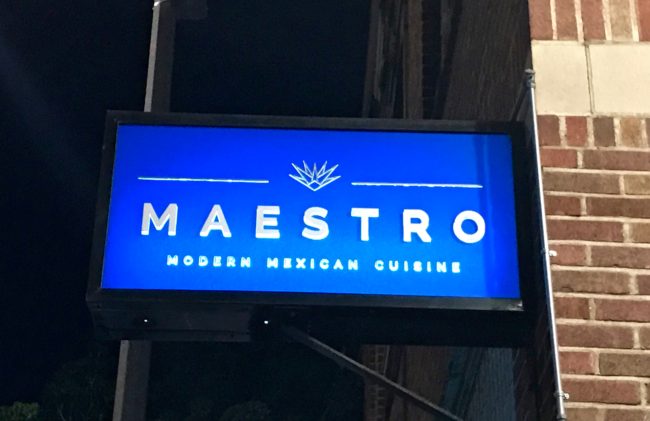 In an article in L.A. Weekly Godinez said, “I want to create things that people have never tried before while still using Mexican flavors. That’s why I call my restaurants ‘cocinas de barrio’ [kitchens from the ’hood].  We’re not following recipes, we’re creating them.”

Our friends Burt and Paula joined us on a crowded Thursday evening (it was nearly full inside at 6:45).  The restaurant space is lovely with exposed brick walls and high ceilings, but unfortunately a tad loud (a reoccurring theme). 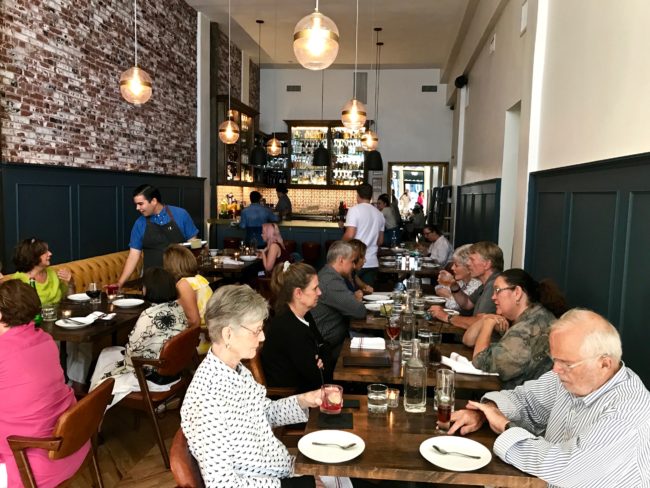 Luckily, Maestro added patio dining alongside the adjacent Big Bang Theory Way (an alley named in the TV show’s honor by the city of Pasadena in 2016).  We elected to take the quieter route and dine outside. 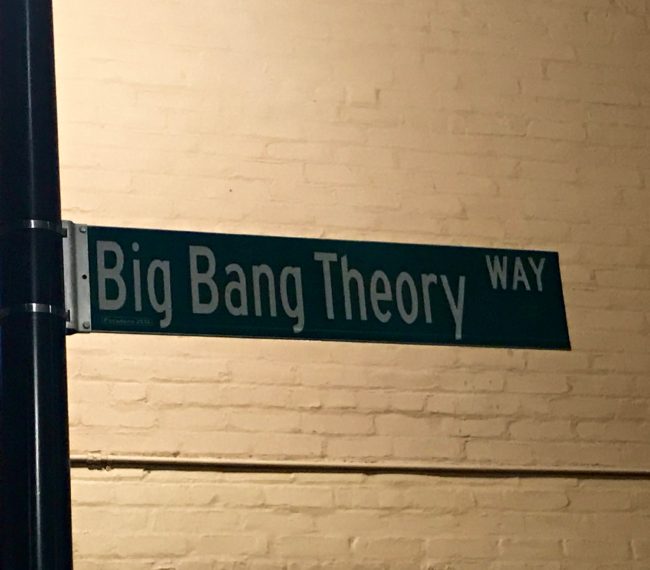 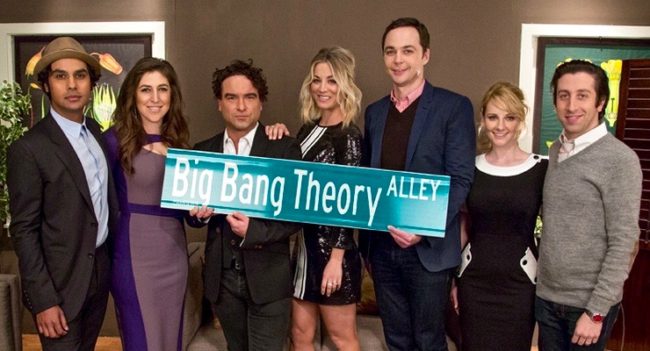 Our server, Abraham, was friendly, and all the staff was well-versed in the menu items.  Abraham explained that theirs is a menu better shared (another reoccurring theme), and he recommended two plates per person. Obviously, he has seen Burt and I eat. 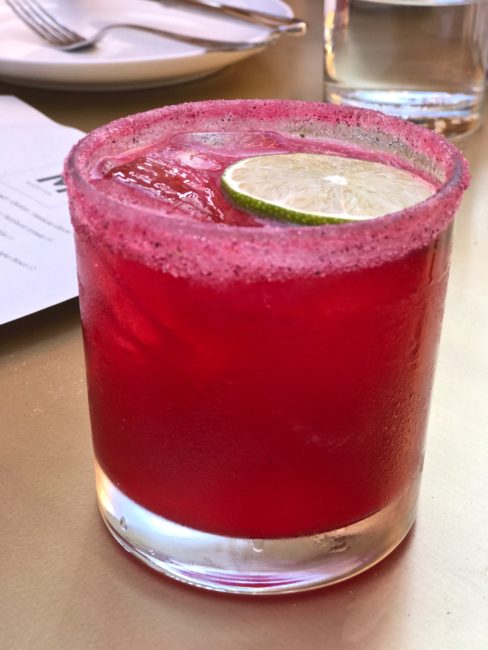 Burt and I both opted for the Big Bang Bourbon ($12), which was very tart.  Next time I’ll change to a margarita (or I might just have a martini). 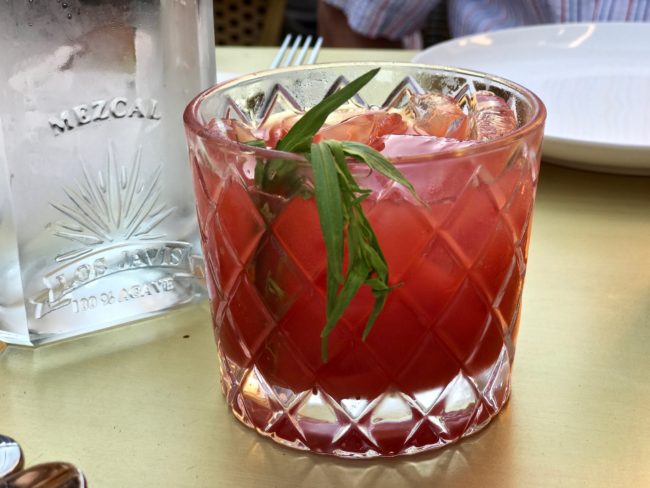 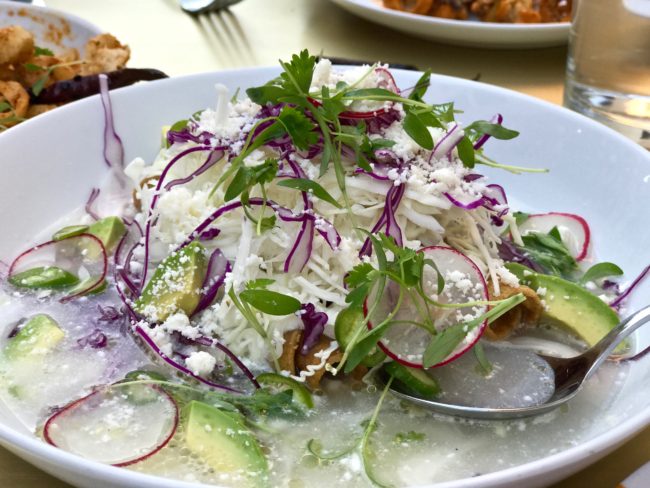 We also tried the calamari on roasted bell pepper puree ($15).  This very delicious calamari was tossed with dried chile de árbol, which we were told we probably would not want to eat as they are very hot.  I, of course, tried one and had to spit it out quickly before the tip of my tongue lit on fire.   Live and learn. 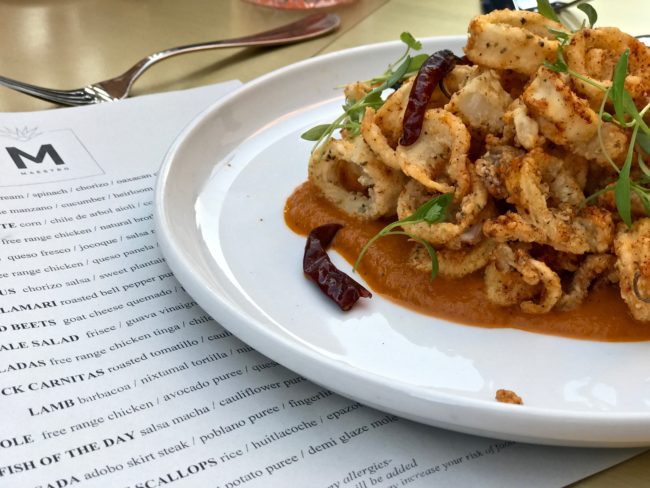 For dinner, we ordered Duck Carnitas; roasted tomatillo, cauliflower, escabeche ($18).  This was a larger dish accompanied by two thick slices of grilled bread.  Although the duck was delicious, Tracy, Burt, and Paula thought the pairing of the bread was odd.  I actually liked the addition, but I’m a bread addict. 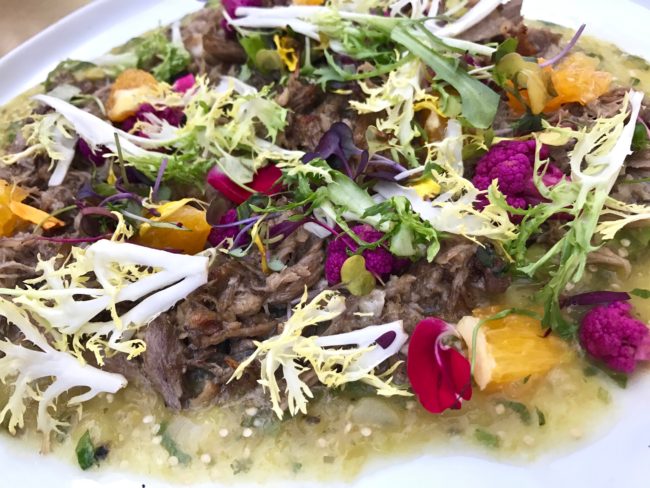 Next up, I absolutely loved the Short Ribs served with a sweet potato puree with demi-glaze mole ($20).  It was fork tender, as short ribs should be, and delicious (“Wow”).  The serving was large enough to slice into four pieces for our table (although next time I will order one just for myself). 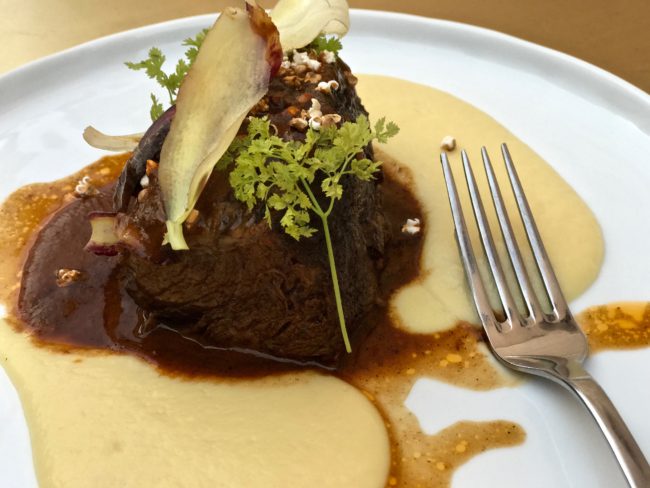 We also ordered the Asada; adobo skirt steak, poblano puree and fingerling potatoes ($26).  This was the only disappointment of the evening.  The puree was good, but the steak was fairly dry and surprisingly not very flavorful.  To be fair, however, Burt and Paula do not like their meat rare, so it was ordered medium (I put my hands over my ears when meat is ordered less than medium rare).  I would try it again on my own at medium rare or even rare, which I think would enhance the dish’s flavor. 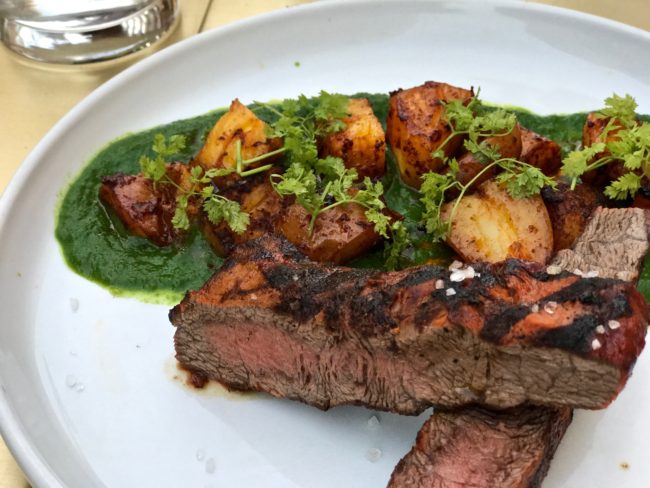 Burt and Paula also shared the Fish of the Day, which on this evening was local white sea bass with salsa macha, cauliflower puree and tortilla dust ($22).

We almost passed on dessert, but we quickly came to our collective senses and tried the Corn Cake topped with huitlacoche ice cream and corn sauce that tasted like caramelized popcorn.  Our server explained huitlacoche is a Mexican truffle.  I would not think gray ice cream would be appetizing, but it was a perfect accompaniment to the cornbread, which earned a “Wow” from our table.   (BTW don’t look up a picture of Mexican truffles… also known as “corn smut.”) 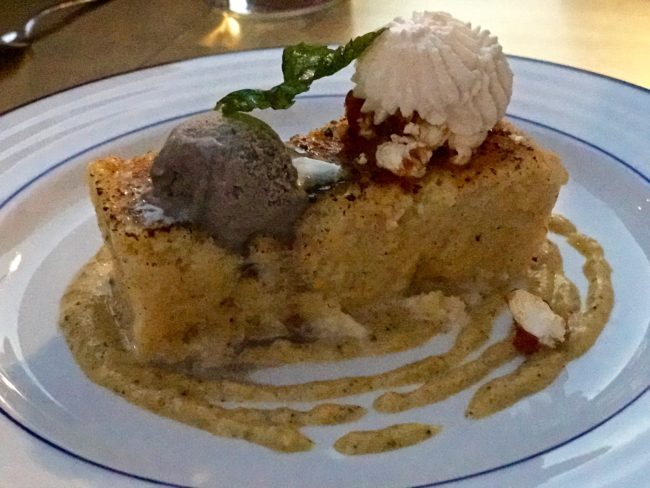 We also ordered the “Jericalla” dessert, which billed itself as a cross between flan and Crème brûlée.  It’s a rich dessert originating in Jalisco, Mexico.  It was good, and Burt and I swore there was a hint of oatmeal in the taste.

The dishes we spied coming out from the kitchen were colorful, and the presentations unique.  An order of the Octopus; chorizo salsa, sweet plantain, avocado puree ($12), was served at the table next to us.  The four pieces of octopus were served on the side of an empty tequila bottle.  It’s inventive, but Tracy and I refuse to eat octopus because they are smarter than we are (although not smart enough to not be caught for dinner). 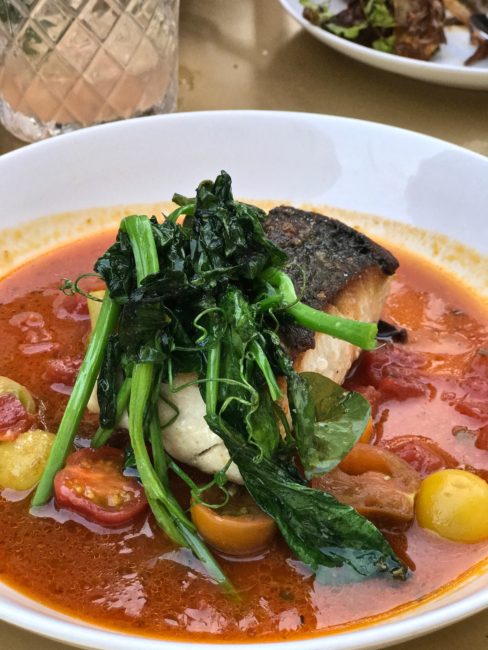 It looks as though Godinez has himself another winner, and Maestro is a welcome addition to Pasadena’s flourishing restaurant scene.  We enjoyed our meal and will definitely return for an encore dinner appearance as well as come back to check out their weekend brunch, which looks very enticing.