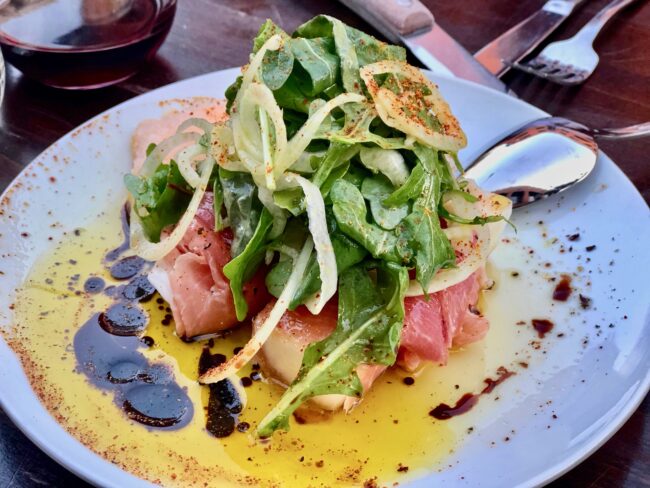 In 2015, Union in Pasadena garnered the coveted Mai Tai Tom Restaurant Of The Year Award.  Union’s menu, which features a number of homemade pasta dishes, had been the creation of Chef Bruce Kalman, who departed in 2018. We had not been back since original owner (Marie Petulla) hooked up with a new executive chef (Chris Keyser) in 2019. The day after the city of Pasadena closed some lanes of its streets (including Union Street) to allow restaurants to accommodate outside dining, we scored reservations. 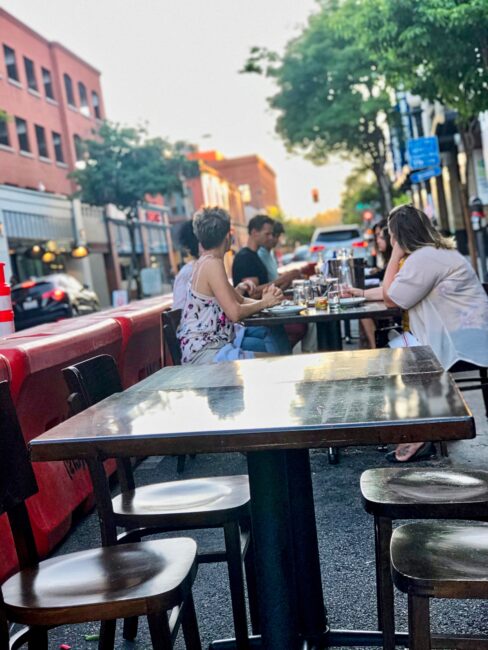 This neighborhood gem serves what has been called the “California version of Northern Italian cuisine,” and utilizes “fresh ingredients that support local farmers, down to the ground polenta.”  The verdict? If anything, Union is even better today than when it won the Mai Tai Tom award.

Keyser’s pedigree includes stints at Philadelphia and Palo Alto’s Vetri and AR Cucina in Culver City. He also traveled to Northern Italy and apprenticed at various Italian restaurants.  According to Union’s website, “He credits his time at the highly touted Cucina Cereda (in Ponte San Pietro, Italy … very near Bergamo) for the deeper development of his style.“ 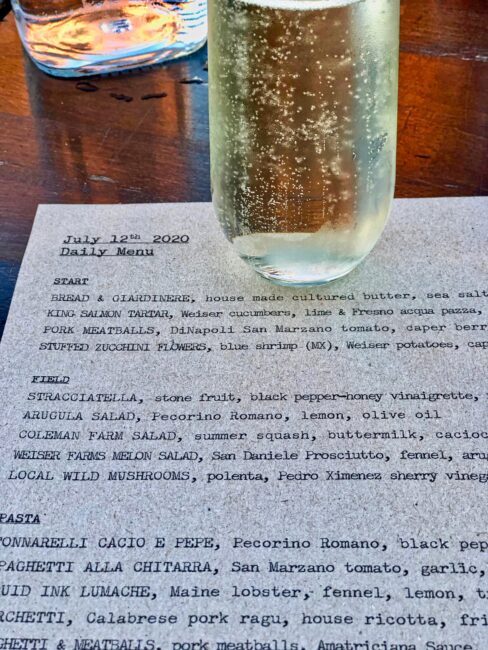 Yes, we took off our masks (but only to sip our drinks)! 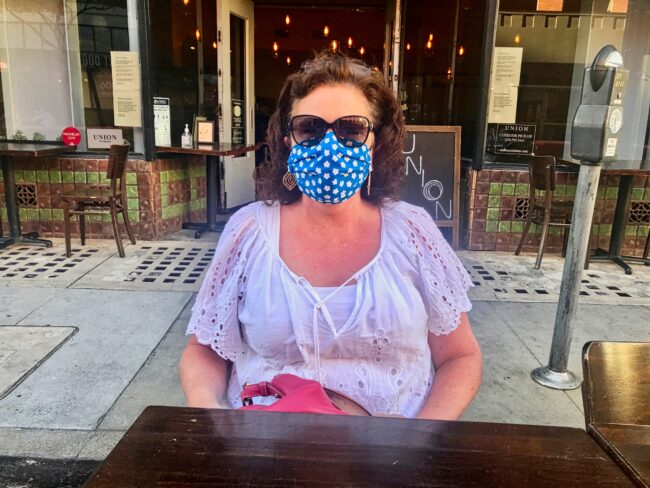 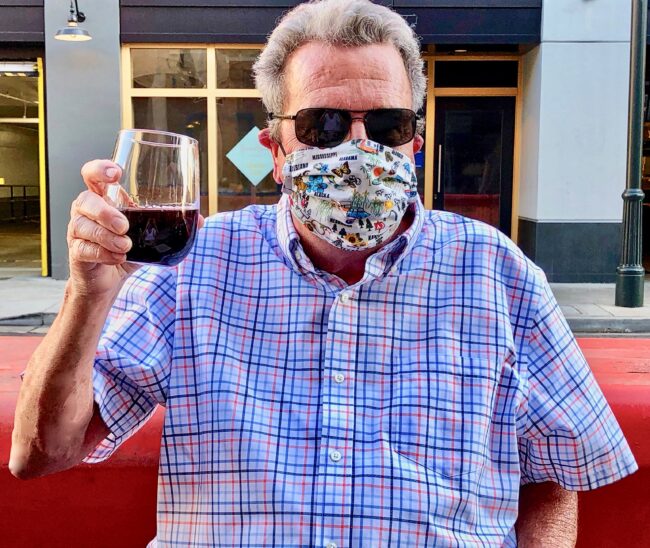 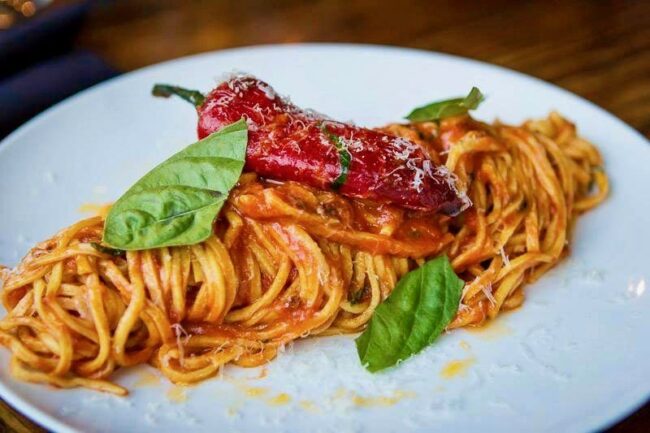 The street was quiet with only about 12 socially distanced tables set up in what Tracy dubbed “The Cone Zone” in a space provided by the city. I believe with all the time these restaurants had been shuttered, Pasadena officials could have come up with a better plan for establishments to use more of the street for dining and also make it more aesthetically pleasing for customers, but truthfully, we were just happy to be back at Union. 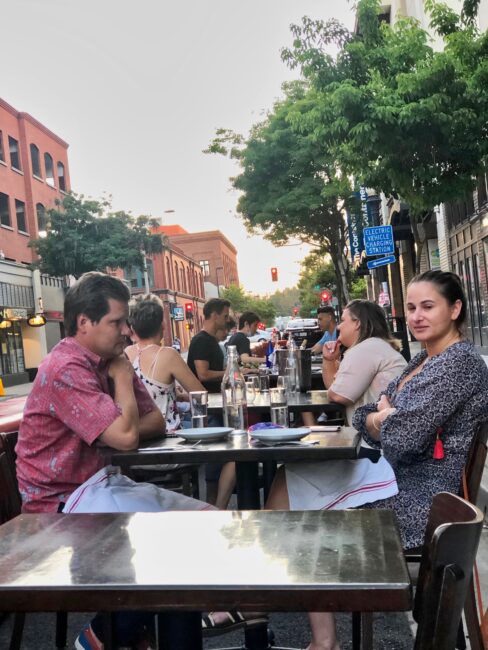 Our server told us that they had been at full capacity the prior evening and had only set up on Sunday for reservations. The interior of Union holds 50 people (photo below when I visited back in the normal days of indoor dining) … 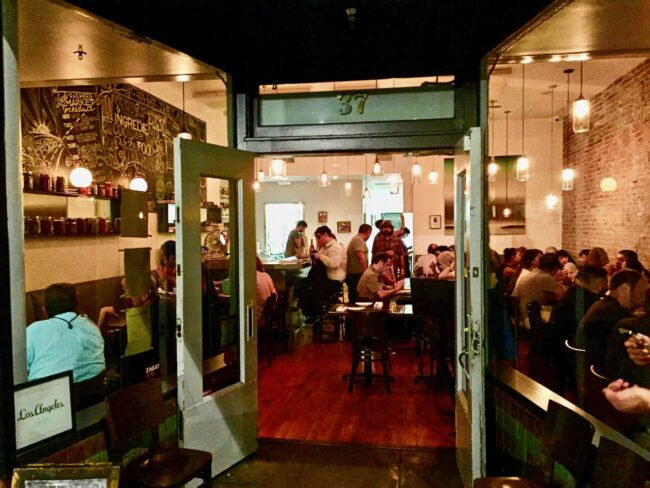 … and it looked like, with the amount of space Union has both in front of its building and to its side, they could serve something at least fairly close to that number outside.  Take-out also appeared to be brisk judging by the number of pick-ups we watched during dinner. 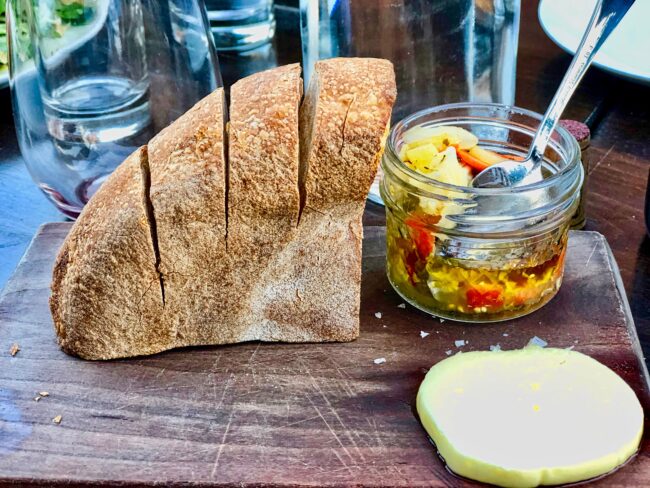 Both couples started with a Weiser Farms Melon Salad; San Daniele prosciutto, fennel, arugula, Saba and espelette pepper ($18). This delicious salad was accompanied by a house-made cantaloupe granita, which elevated the salad to a whole new level of “WOW!”  Tracy asked if the granita was available for dessert, but was sadly informed that they only made enough for the salad …. We need that recipe! 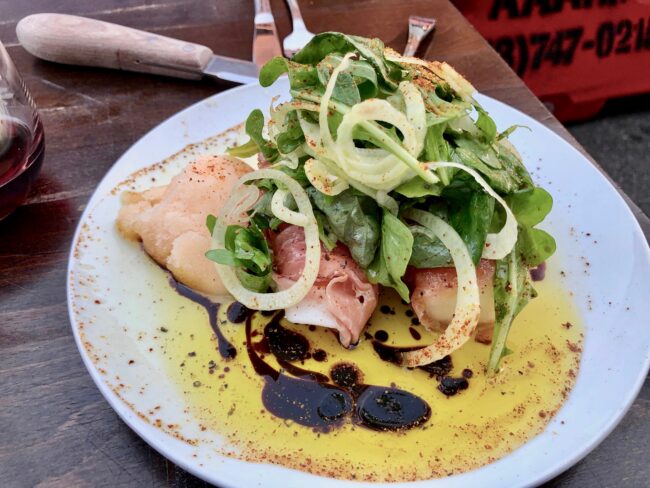 For their main course, Jeff and Cecilia shared the Squid Ink Lumace ,which they declared a “Wow!”  Chunks of Maine lobster, fennel and lemon drizzled with truffle butter served over squid ink Garganelli pasta which is a handmade rustic version of penne. 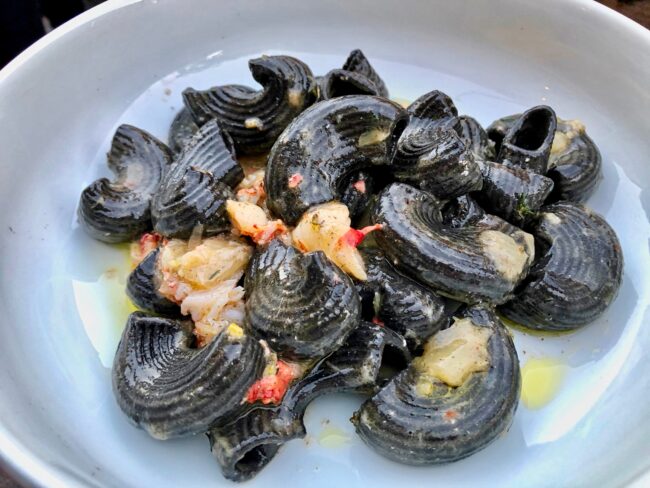 They also shared the Marin Sun Farms Pork Chop; a huge bone-in chop served on a bed of mixed wild mushrooms, Saba and grilled Red Salanova lettuce ($36). (Saba is “an Italian syrup made from cooking down grape must.” Think thick syrupy balsamic.) 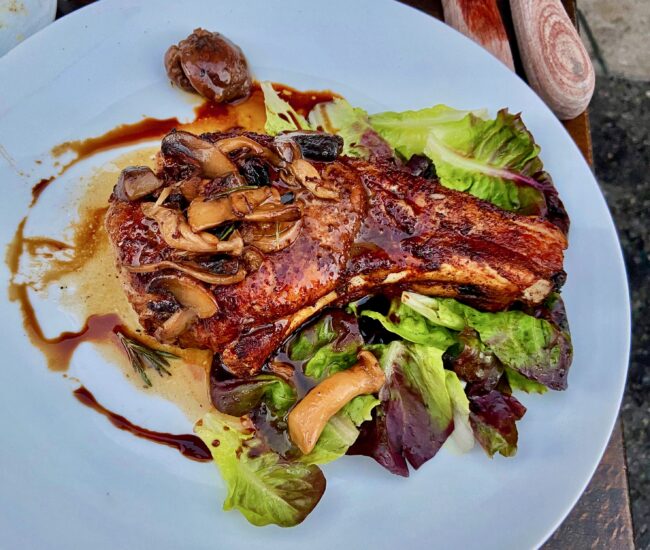 I, the man who never met a cacio e pepe I didn’t try, ordered the Tonnarelli Cacio e Pepe; Pecorino Romano, black pepper and 63°C  egg ($21). The beautiful big bowl of al dente tonnarelli arrived with a perfectly cooked egg on top, which was broken and stirred into the pasta by our server. 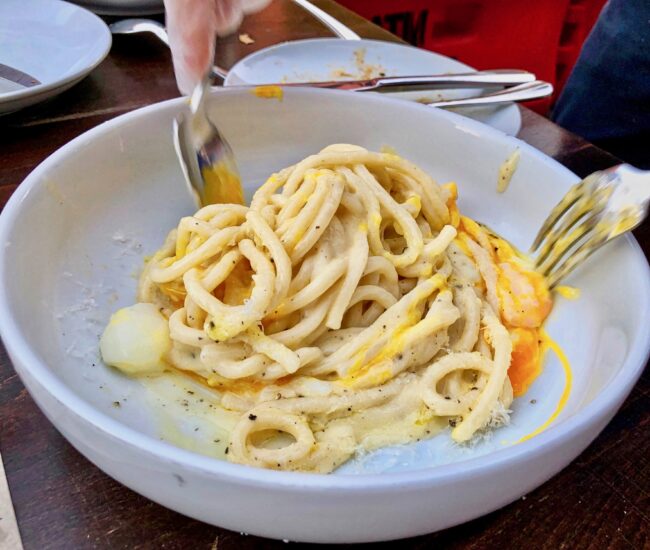 In case you were wondering (like we all were), what is a 63°C (145.°4F) egg, “it’s an egg cooked slowly at a very precise temperature … to achieve a high-impact result: a shimmering, silky orb of creamy egg white surrounding a rich, softly liquid egg yolk. It’s cooked in its shell in a water bath … The water is kept at a constant 63 degrees Celsius, and the egg is left in there for one hour.” 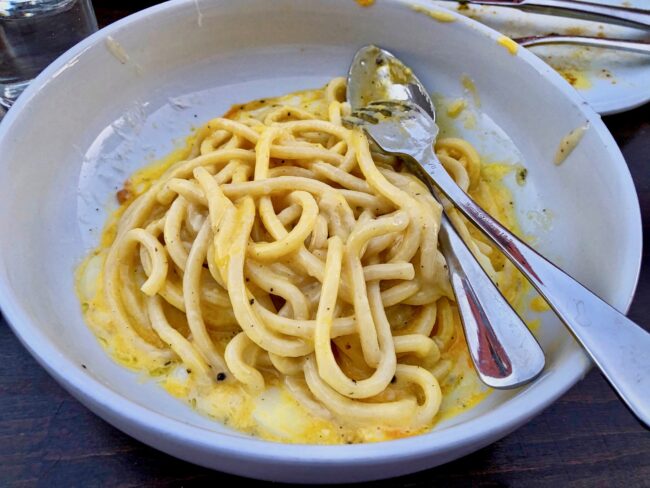 Tracy ordered the dish of the night, Torchetti Calbrese pork ragu; house ricotta, fried rosemary and pepperoncini ($26). “Wow, Wow, and Double Wow!” This was an excellent pasta with just a hint of heat in the pork ragu. The shape and ridges of the torchetti pasta soak up the perfect ragu, topped by a scoop of house-made ricotta and the rosemary, which was mellowed slightly by being lightly fried. We actually thought about getting an order to go for lunch the next day it was so good. 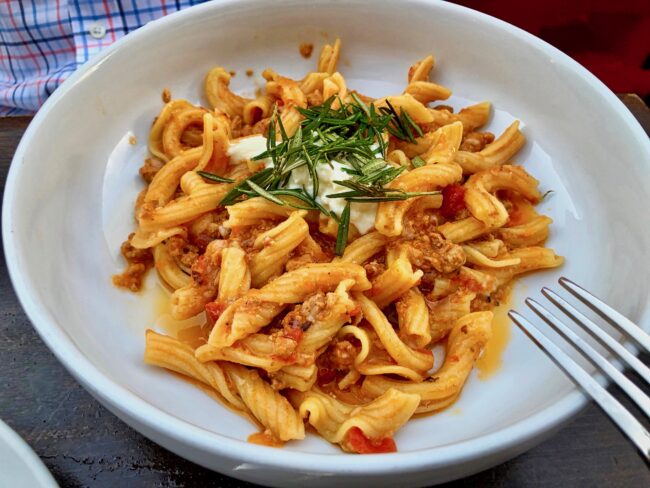 Two dessert items were on the menu, and, of course, we had to try them both. Jeff and Cecilia ordered the ricotta cheesecake topped with blueberry sauce ($11); while Tracy and I shared the Olive Oil Cake topped with vanilla ice cream and served with plums ($11). Our dessert was plum delicious. 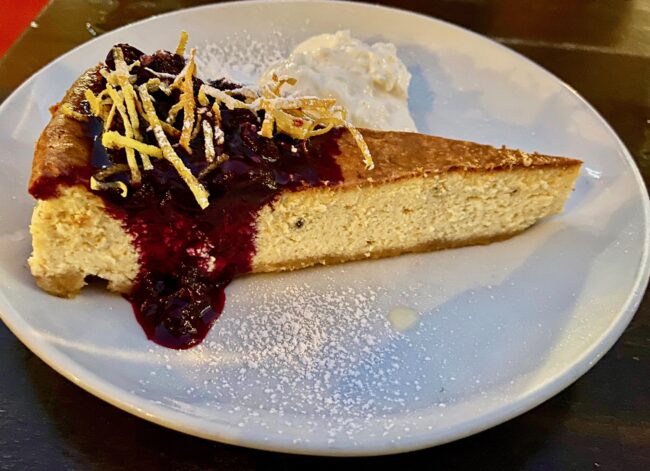 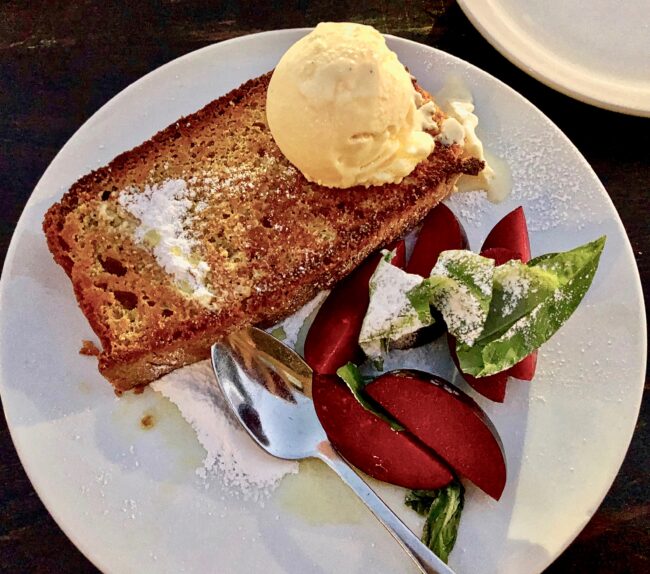 The wine list is on the expensive side (no bottle under $56) and there’a a steep (in my opinion) $35 corkage fee, although next time I will go the corkage route. I will admit the wine we ordered was very, very good. 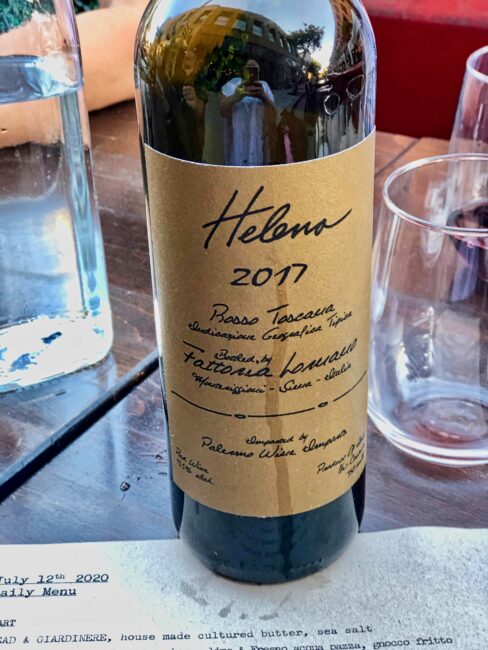 As for the food, just like in the early years, each dish was magnificent. Perfectly cooked pasta mixed with great flavors make Union a must for anyone who needs to have their taste buds dazzled. I’m sure we’ll be back in the not-too-distant future to try dishes like Fettucine Carbonara; Marin Sun Farms lamb belly, Parmesan Reggiano and egg yolk or Campanelle; or Beef Bolognese; mustard greens, Parmigiano, garlic bread combined with arugula salad. 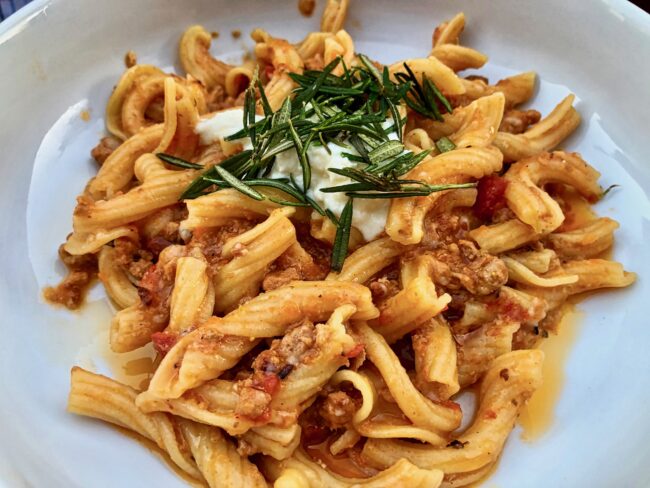 It’s great to see that Chef Keyser and his crew have kept Union at the top of our Pasadena restaurant list. Who knows … perhaps it will become the first repeat winner of the Mai Tai Tom Restaurant Of The Year?

(During this pandemic, I decided that we would not feel comfortable handing out grades to restaurants, which are working very hard in an incredibly tough environment.  We will only review the restaurants we deem to be “very good,” a category that Union passes with flying colors)