Great Dining … Plus A Rooftop Bar! 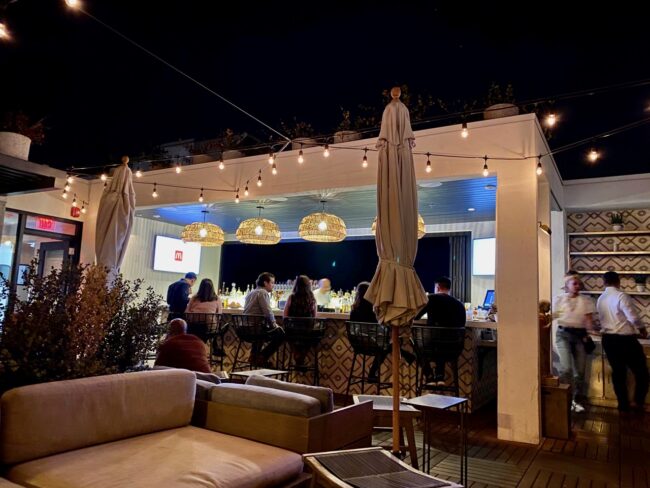 When Granville opened in the spring of 2019, boasting the only rooftop bar in Pasadena, we knew this was a place we had to visit!  Granville is a small Southern California chain of “modern-casual” restaurants featuring more than 60 dining items, which also includes an array of vegan, vegetarian and gluten-free menu options.  It’s yet another delicious dining option on South Lake Avenue. 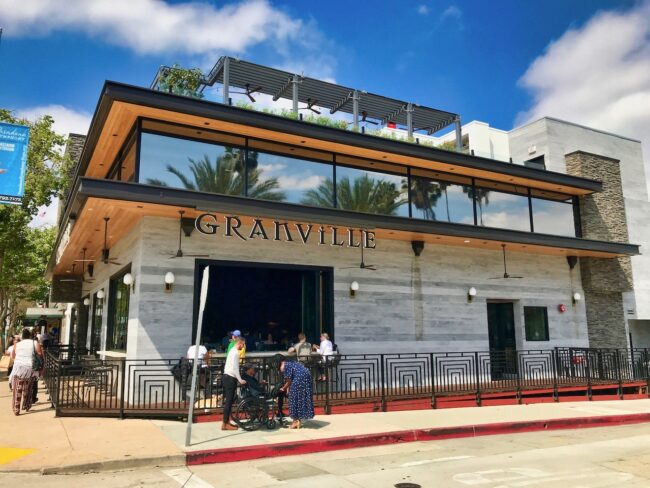 I’ve never believed it’s fair to write about a restaurant soon after it has opened for business.  I feel I need to wait for an establishment to work the kinks out and, as expected, the first couple of meals we had within a few weeks of its opening were mostly good, but a little inconsistent.

Our first outing was for a special Easter brunch.  I immediately liked the layout of Granville.   Walking inside, there is a dining area on the left, while on the right is another dining area that includes a large bar and a couple of big screens where people like me can check-up on the latest scores and catch a glimpse of the game.  There is also an upstairs dining area. 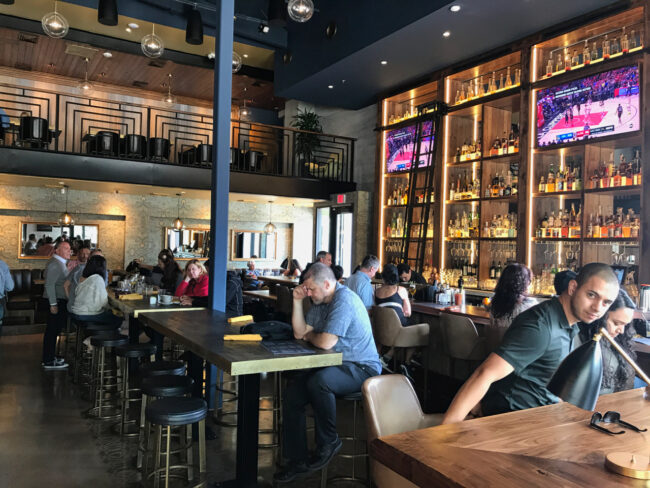 The rooftop was closed on that day because it was cold and blustery, so we didn’t get to check it out.  We dined upstairs (including the rooftop bar, the building is three-stories tall) with our friends, the Chicas.

Everyone except Tracy enjoyed their meals.  Tracy ordered chilaquiles, but failed to notice that you had to order the egg separately, so it was basically vegetable nachos.  (The v-vg-gf next to the menu description should have been a hint.) 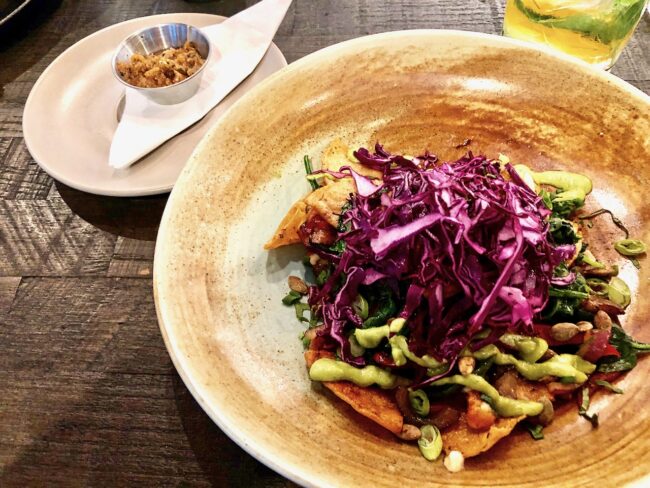 I do recall the staff was exceptionally helpful in describing the dishes (apparently Tracy wasn’t listening … ok, I’m going to stop now before I get in trouble).

For the Easter brunch, I enjoyed a very, very good Butternut Squash soup with cranberries and walnuts, topped with a little parsley. That, coupled well with my Rustic Steak Sandwich; blue cheese, caramelized onions, horseradish & garlic aioli on ciabatta bread, made for a perfect combination. 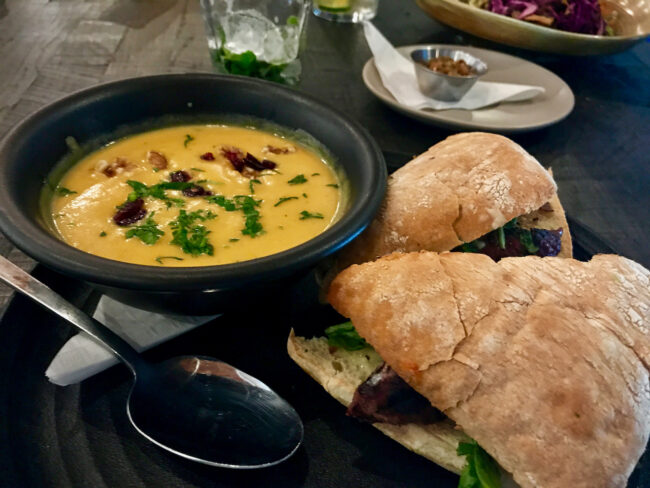 For starters, I ordered a refreshing Ginger Julep; bourbon, ginger liqueur, berry lemonade and mint. The only thing missing was the Kentucky Derby.   It’s entirely possible I ordered a second. 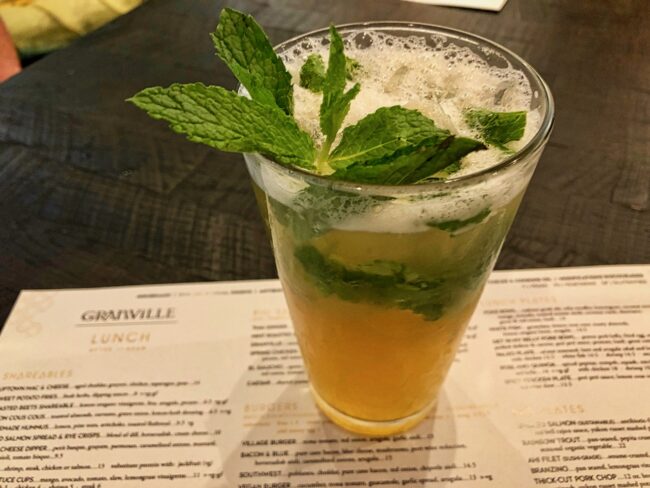 One other dish getting kudos was Gema’s chicken and mashed potatoes. 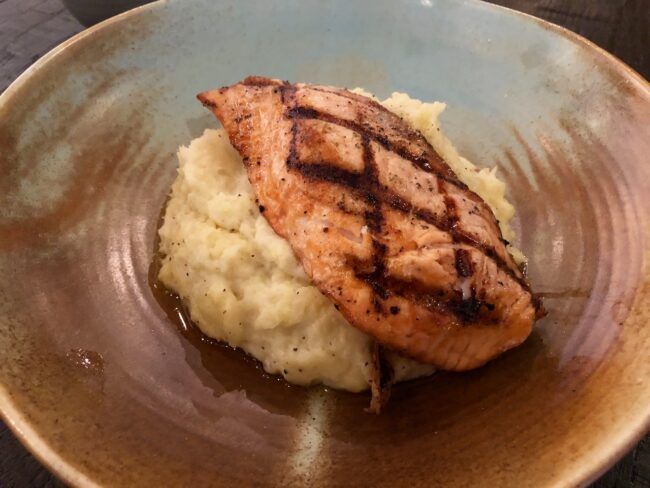 We returned again a couple of weeks later with friends Burt and Paula, and thought the food was good, but still it was too soon to write about Granville.  This time we were seated in the room on the left as you walk in. 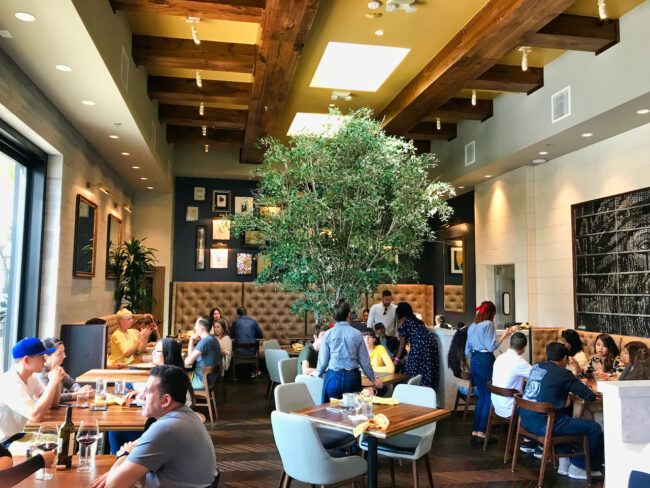 We shared a platter of really good tacos (shrimp, steak, chicken and something else … it looks like on the recent menu it is now a “Taco Trio”), and I do remember I was very happy with my tasty beef beef stroganoff and an incredible dessert (more on that dish later). 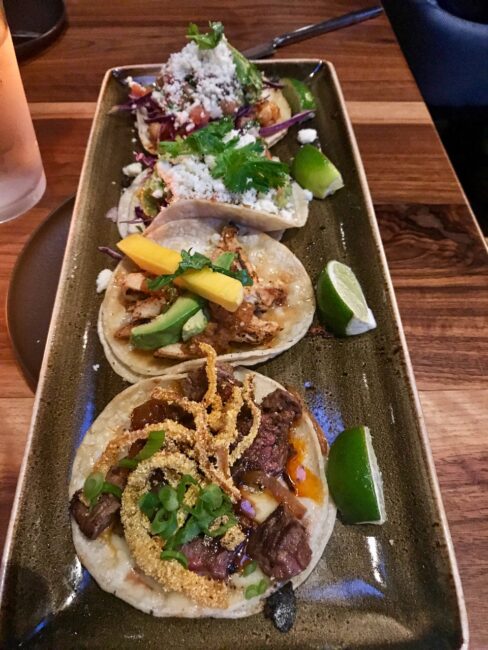 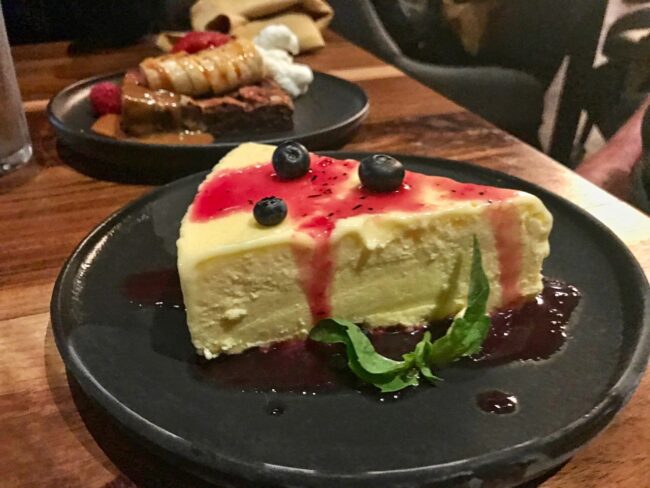 Once again we attempted to get drinks at the rooftop bar, but it was understaffed that evening, and it took way too long to get a drink. Knowing they’d only been open a few weeks, I gave it a pass.

Fast forward to nine months later.  At subscriber Garrett’s insistence, it was now time to give Granville its close-up.  Since Garrett has not steered us wrong yet with his restaurant choices (Dama and Hippo to name a couple), we went for Dine Pasadena Week, which I thought contained excellent menu options at a fantastic price point (actually, the price point for most all of Granville’s dishes are quite affordable in this day and age of over-priced menus).

We arrived at 5 p.m. on a Saturday, determined to try that rooftop bar.  Once again we were shut out (The bar, as it turned out, is very popular.)  It was packed, and there was a waiting list to be seated on the rooftop.  We were then led to a booth near the downstairs bar area and perused the Dine Pasadena menu (which had items from their daily dinner menu).  The menu included a glass of beer or wine, appetizer, entrée and dessert for $39.

Garrett started with the Smoked Chili; black and white beans, avocado, mushrooms, tufu and eggplant which he thought was just ok. (Another editorial comment – I had a spoonful and thought it was actually pretty good.) Alex ordered the Uptown Mac & Cheese; aged gruyere, cheddar, chicken, peas and asparagus.  He shared this with the table, and it was tasty (and I don’t even like peas or, if truth be told, asparagus). 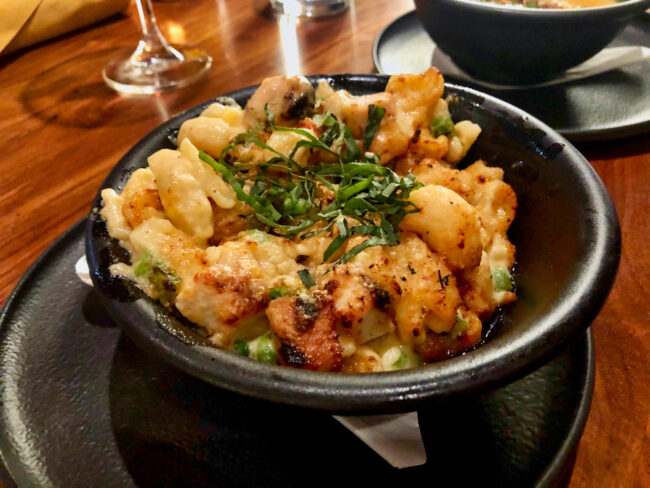 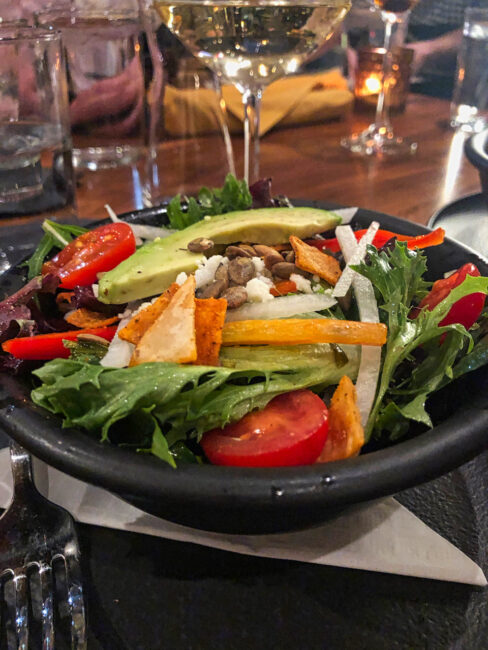 Lastly, Valerie and I each ordered the Butternut Squash Soup with cranberries, walnuts and parsley.  Wow!  It was even better than I remembered. 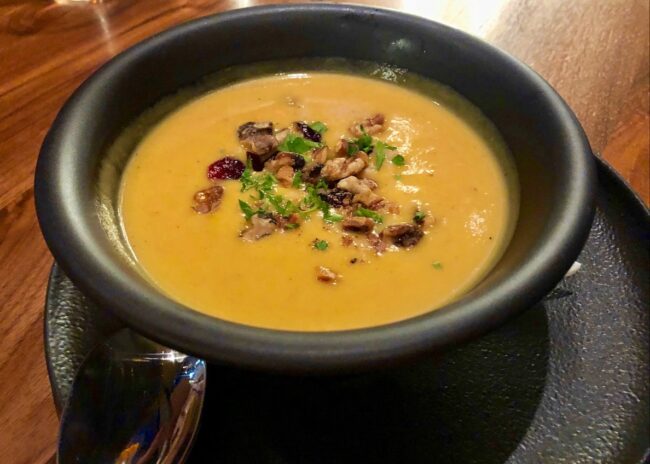 For our entrées, Alex ordered the Branzino; pan seared with lemon grass vinaigrette, sliced beets and grilled asparagus.  As you can see from the photo, this was one large fish. I think it hooked him. 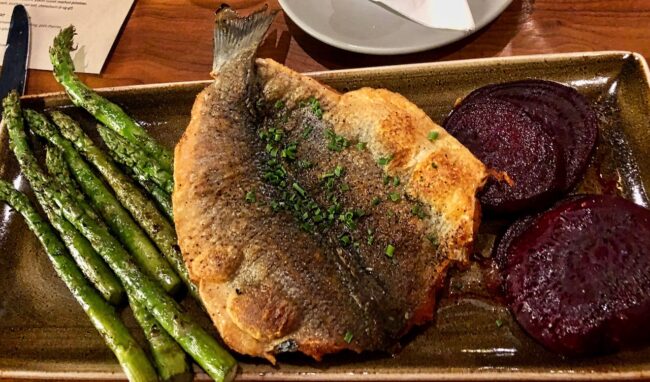 Valerie opted for the Skirt Steak with chimichurri, with a side El Gaucho salad and Yukon Russet mashed potatoes, which she greatly enjoyed. Valerie was nice enough to share a bite with me, and this was a very good steak. 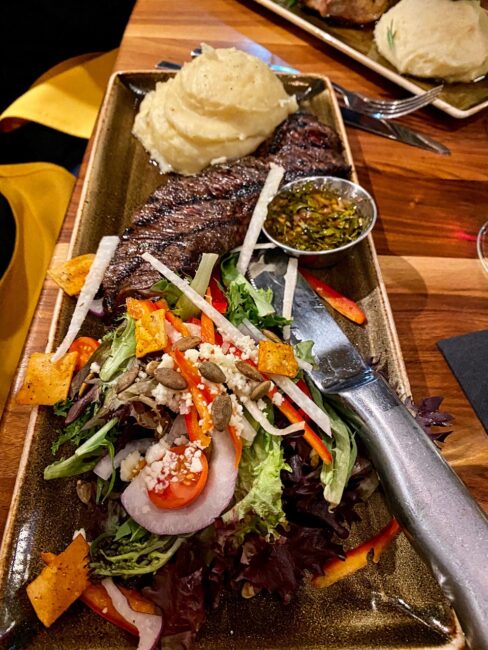 Garrett, Tracy and I (at Garrett’s enthusiastic recommendation) all ordered the Thick-Cut Pork Chop; 12 oz. bone-in, Cajun rub with cranberry-mango compote, sautéed spinach and Yukon Russet mashed potatoes.  This was a great chop, cooked to perfection, and the cranberry-mango compote on top was outrageously good.  Wow! 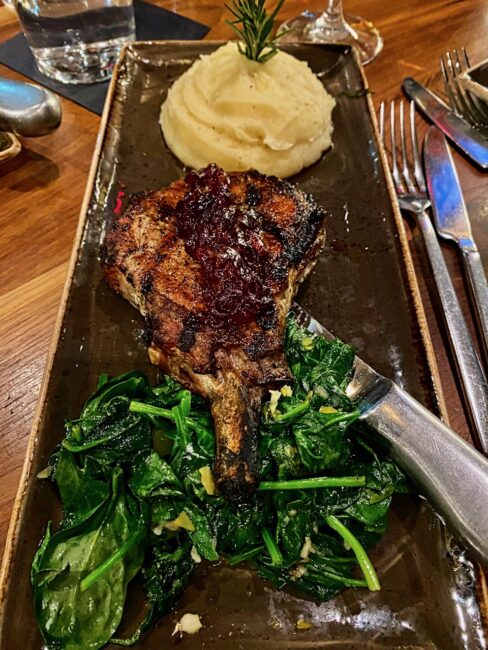 There were two options for dessert on the Dine Pasadena menu, and our table, of course, sampled both.  I was the only one to order Devil’s Advocate, a Flourless Chocolate Cake with cream cheese frosting and port cherries. 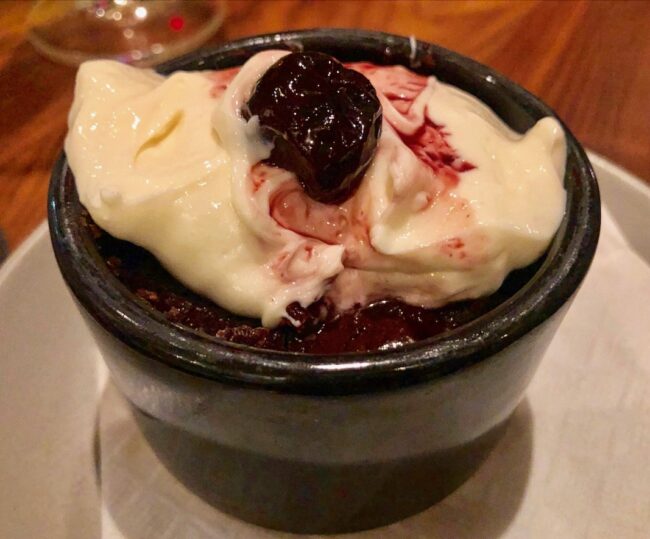 The rest of our group decided to go with the Yuzo Lemon Chill, Yuzu lemon mousse with basil-blueberry glaze.  A Yuzo is a Japanese lemon (confession, we had to ask).  The Yuzo dessert was the clear winner at our table … tart, yet refreshing.  I’m getting one for myself on the next visit. 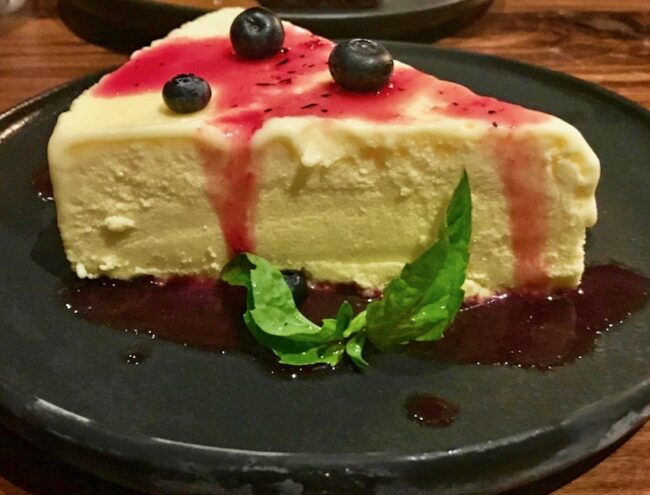 After paying the reasonable bill, we were finally able to retire to the rooftop for some after-dinner coffee and drinks.  It was lovely upstairs and looks like a great place to watch the sunset.  Thanks to Garrett, this rooftop experience proved to be quite costly … for me.  Due to his recent purchase of the iPhone 11 Pro, which he used to demonstrate how great the camera is in really low light by taking this photo of the bar, Tracy said to me, “Tom, I must have this phone.”

When she said that, I immediately ordered another TomTini (recipe). The bartender, who had never heard of the drink (mainly because we made the name up in Siena, Italy, in 2005), made a couple of the best ones we’ve ever tasted.. 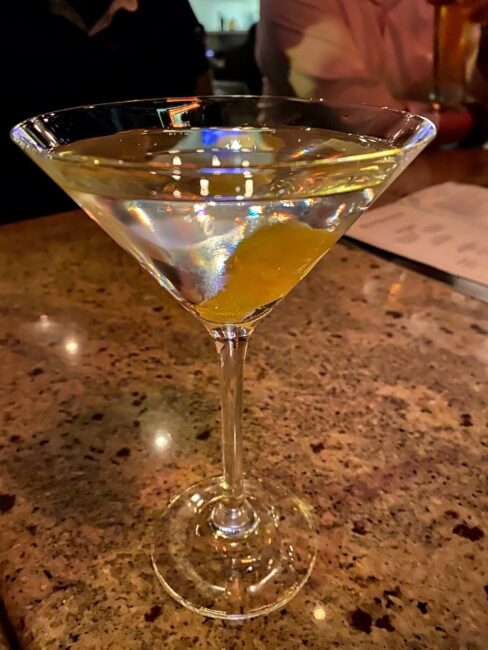 Granville had won us over. The food was very good, and the entire staff was professional (shout out to Shannon!), while also being very personable, too.  As stated, there are a lot of menu options to choose from. 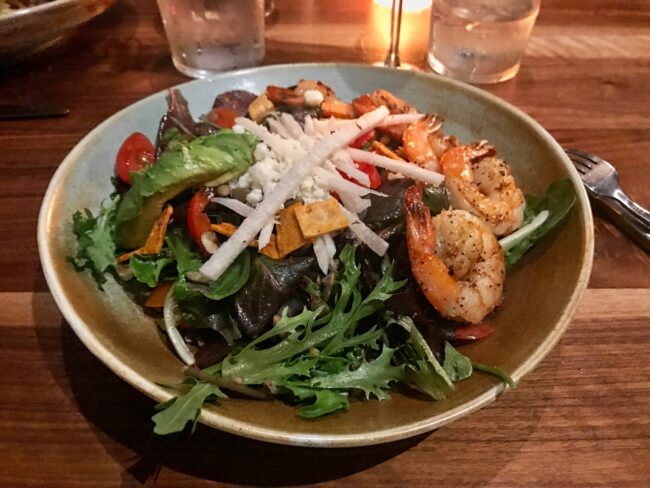 On our next visit, there are a few items I’m deciding upon ordering, including Farro & Mushroom Risotto and the Bacon & Blue hamburger. Then again, that pork chop will be hard to pass up.

We’re also looking forward to the warmer weather and spending an evening or two (ok, maybe more) enjoying that rooftop bar … but we’ll make sure to get there early.