It Had To Be You! 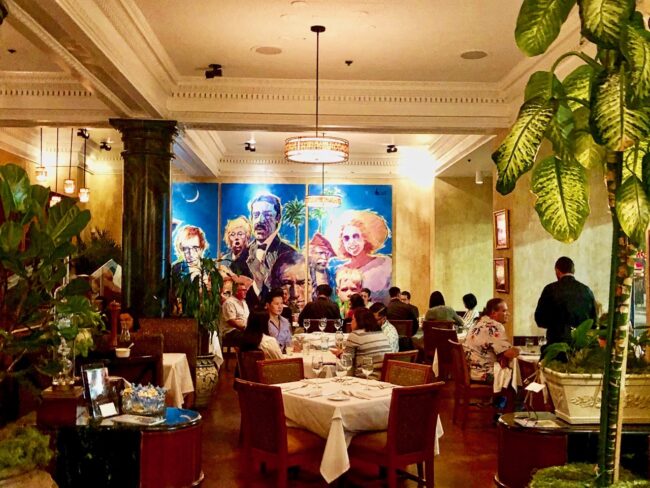 As I recall, it was a beautiful spring evening in May 1990. I had been researching police documents and perusing personal interviews for an article I was writing, attempting to piece together an unsolved murder mystery in Long Beach. Channeling my inner Dashiell Hammett, I walked to the bar at a recently opened upscale restaurant called L’Opera Ristorante. As the evening progressed, it would become “the stuff dreams are made of,” although a falcon would play no part.

Shortly after I was ensconced at the bar, two lovely ladies sat down on my left. “Well, this doesn’t happen often,” I thought. OK, this never happens. (photo is not from that night) 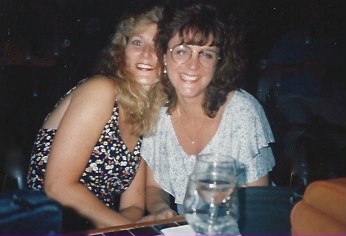 In any case, as I nursed my Rob Roy, I started sifting through the mounds of paperwork on the murder case that seemed as hard to write about as it was for the police to solve.  Where’s Sam Spade when you need him? 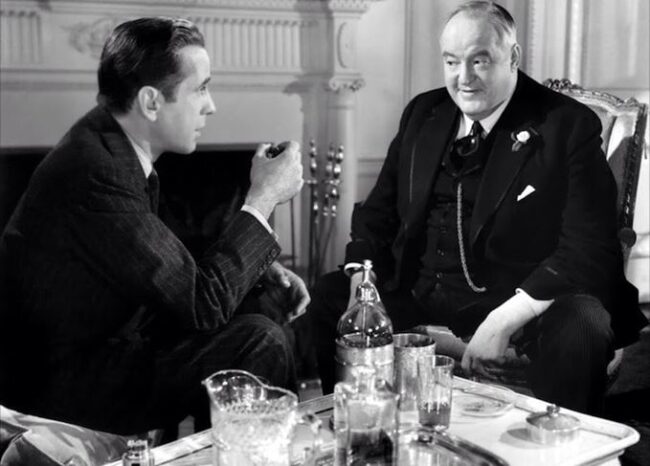 Within a few minutes, my attention was diverted (I blame the Rob Roy) by some chitchat that started me laughing (softly, at first). The bartender, in a rather futile attempt to woo the woman sitting beside me, began a string of some of the worst pick-up lines I’d ever heard. I should know, I’d probably uttered a few of them myself.  The worse the lines became, the louder I chuckled. The article was put on the back-burner (as it turned out, a couple of Rob Roys were not great writing stimulants), so I could concentrate a little more on the women next to me. A man must have his priorities.  (Truth be told, I had used this tactic in the past when someone else’s pick-up lines were falling short … please don’t tell Tracy.)

Their names were (and still are) Gloria (who was married … and still is) and Tracy, who happened to be the girl sitting next to me. She also happened to be the object of the bartender’s rapt attention. Gloria, Tracy and I talked a little bit (in between pick-up lines from behind the bar) and finally they received their bill. After paying, Gloria stood up, looked at me and blurted out, “So, when are you going to ask her out?”

Thanks to Gloria’s question (forever grateful to you Gloria), Tracy and I have spent the past 30 years together, although I did give up Rob Roys after that evening. (Don’t worry, I took up Manhattans, which was Tracy and Gloria’s drink of choice that night.)  And, no thanks to that night, I eventually finished the article. 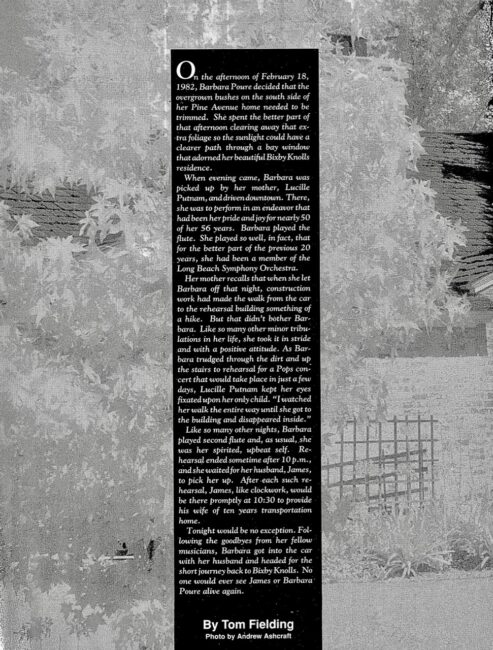 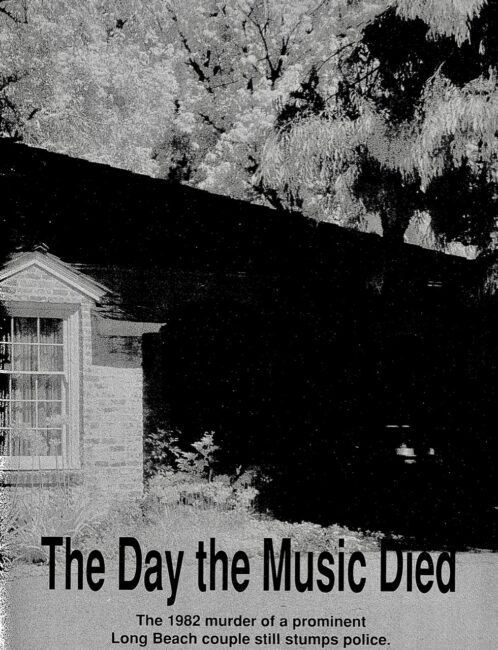 Recently, to celebrate that momentous meeting, Tracy and I, along with Gloria and her husband Greg, returned to the scene of our first encounter, not only for drinks, but to enjoy dinner.

In 1990, Pine Avenue in Long Beach was nothing special to talk about. There were some historic buildings, but not much was happening there. When L’Opera opened in April of that year in one of the city’s most famous historical landmarks (the 1906 First National Bank of Long Beach building), it started a transformation of the area that is now recognized as the city’s premier dining and nightlife spot. (photo courtesy city of Long Beach) 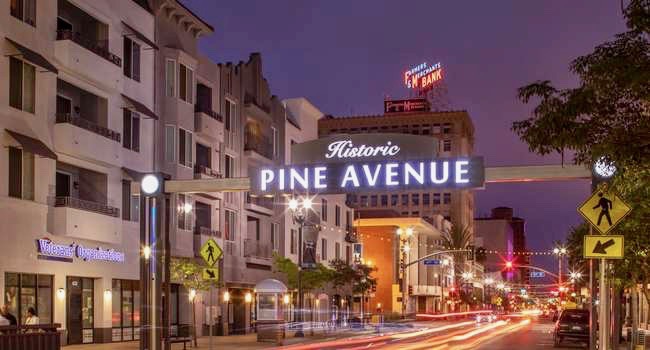 We realized its popularity immediately as we arrived for dinner because the streets were jammed with people and cars, so we valeted. Next time, we’ll take the Metro Blue Line that deposits you virtually at the restaurant’s front door. 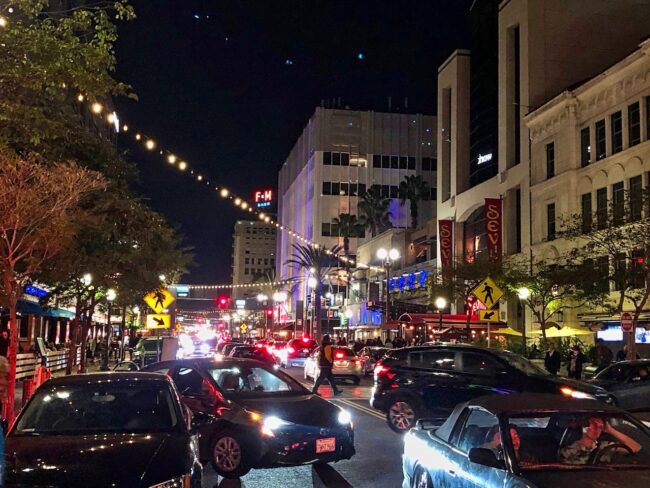 Tracy and I arrived a little early. To the right as you walk inside is a small dining area with a colorful mural. 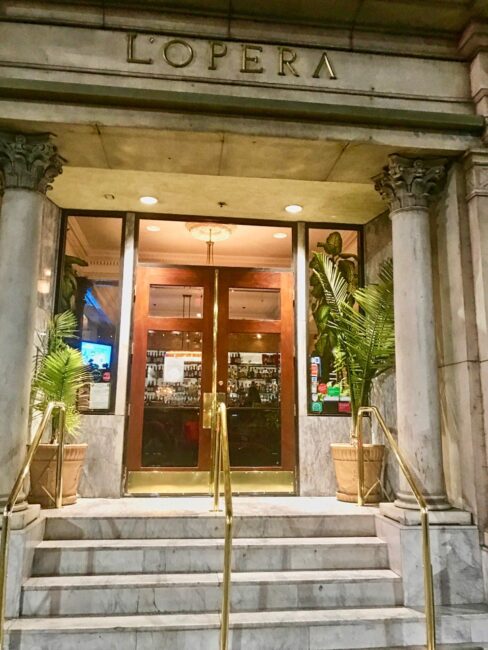 Straight ahead stood a room that looked quite familiar. This photo of the bar from L’Opera’s website shows exactly where the three of us were seated back in 1990. Coincidence? I think not. 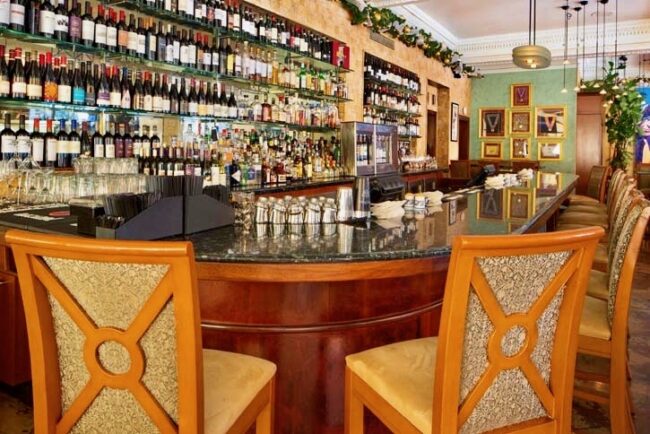 Instead of a Rob Roy and a Manhattan, Tracy and I toasted our 30 years with a Tomtini. 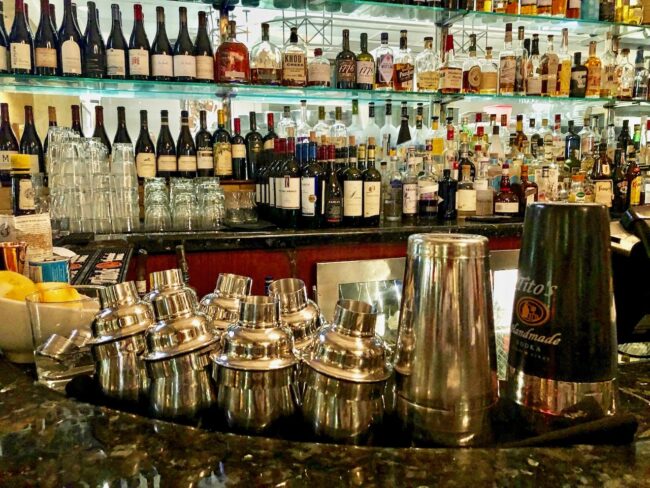 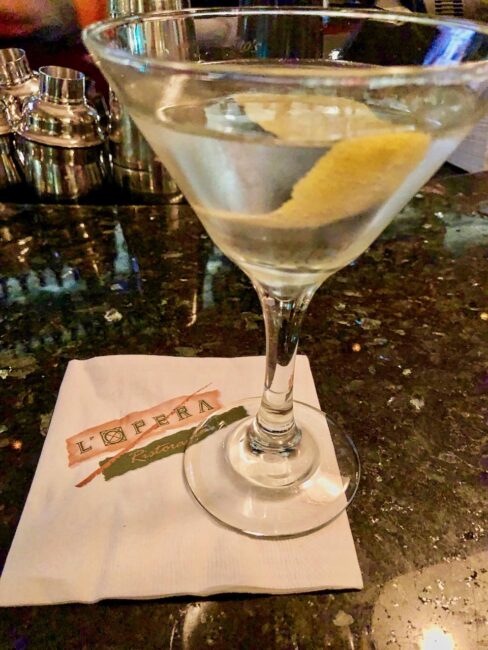 Greg and Gloria showed up shortly thereafter (this photo of the four of us was taken in Beaune, France (It seems we end up in the bar no matter where we are.) … 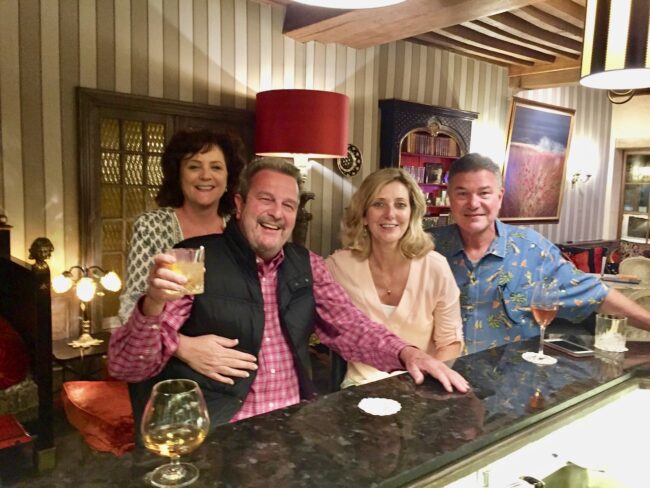 … and we were led to one of L’Opera’s plush dining areas (photos courtesy of L’Opera). 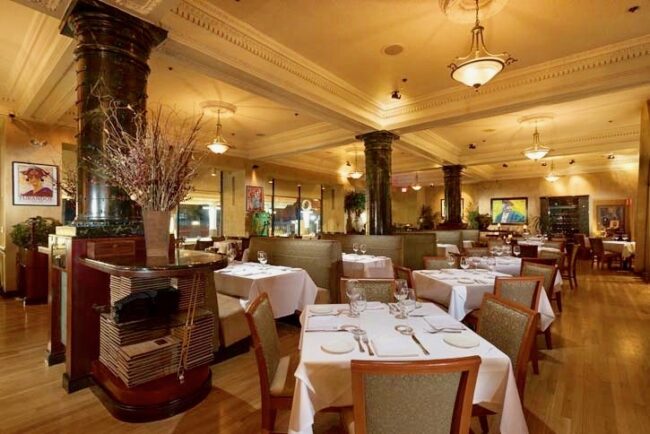 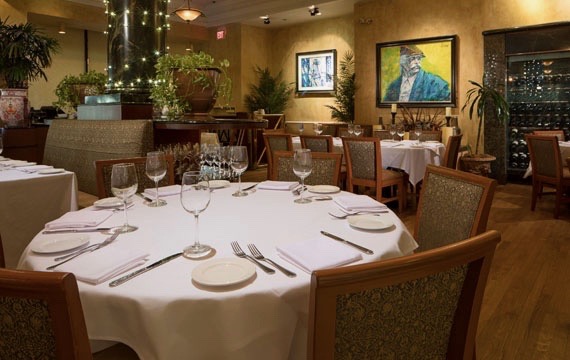 To start, we ordered a couple of items from the Antipasti section to share: Ahi Tartaro, Ahi Tuna Tartar, Chipotle Aioli, Marinated Fennel, Avocado, Mascarpone Mousse and Sliced Cucumbers ($17). And from the Special menu – thinly sliced beef tenderloin.  This was the big winner of the antipasti dishes.  I might have had a little more than anyone else. 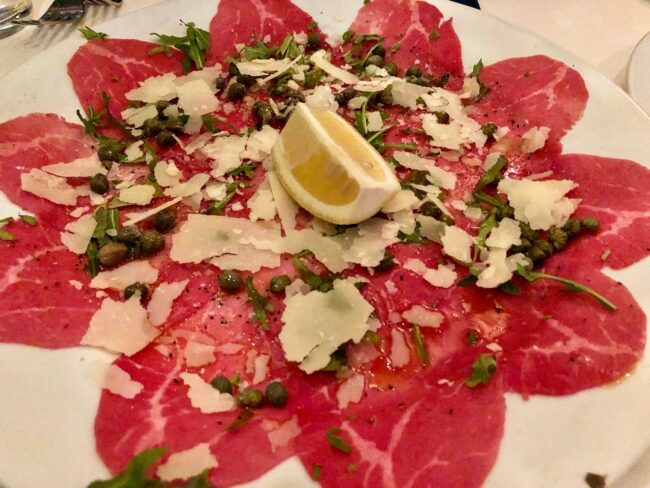 For our main course, Tracy and I opted for pasta. I ordered the Cappelli Lombardi, Homemade Ravioli Stuffed with Red Wine Braised Short Rib of Beef and Ricotta, topped with a Gorgonzola Cream Sauce and Parmigiano ($27).  Wow!  Can I order another? 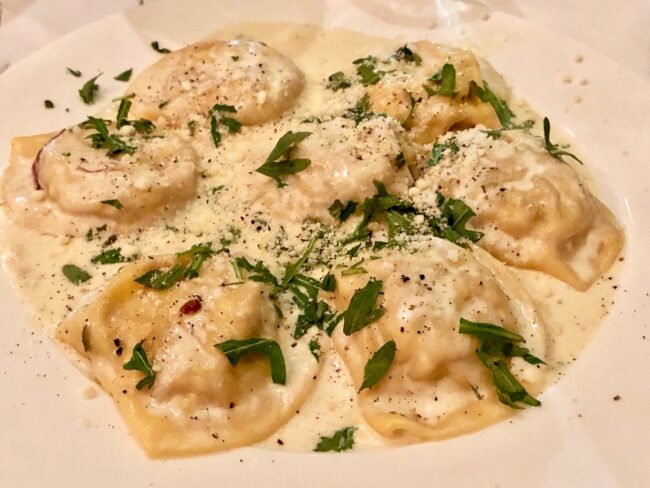 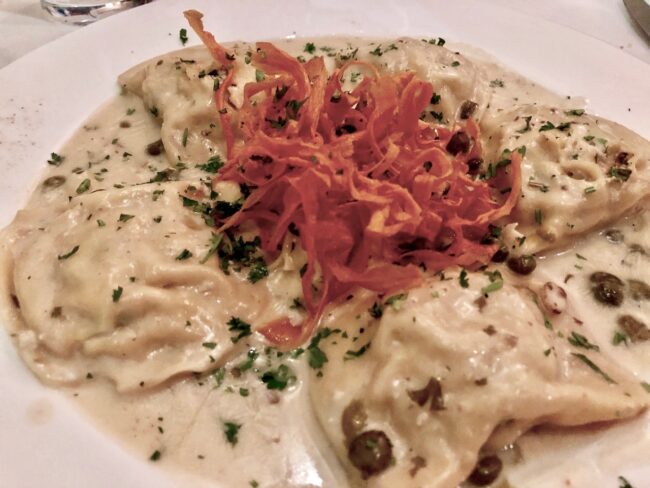 Greg and Gloria ordered off the special menu. Greg had the special risotto with beef, while Gloria went for the fish special of the day which was red snapper. 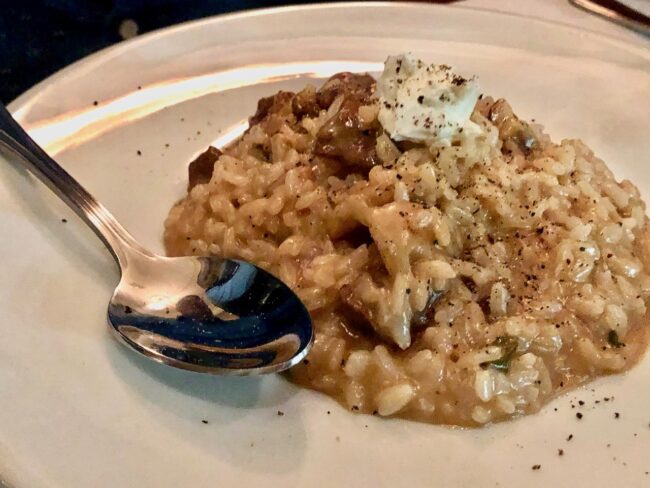 The Soffice e Leggera, Caramelized Crushed Pineapple, Poundcake; Hot Caramel Sauce & Crème Anglaise ($13) called my name for dessert, however I was talked into the Sacchetto di Cioccolata, Callebaut Belgian Chocolate Sphere, Chilled Zabaione & Fresh Fruit ($13).  I have never met a zabaione I could pass on, well, if truth be told, I can never pass on dessert!  Life’s too short!  It was terrific. 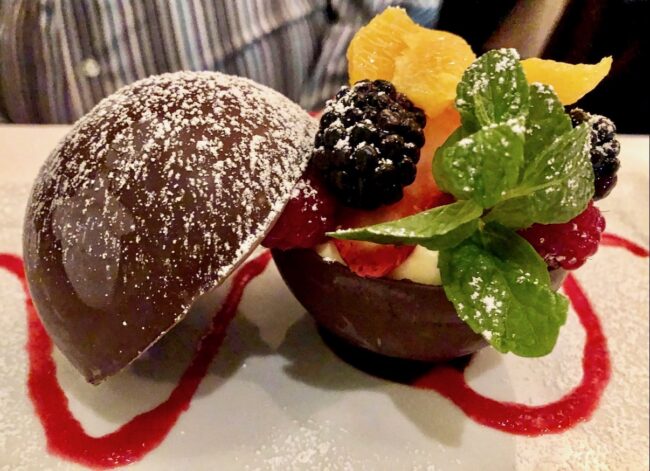 Greg requested an Affogato, which was not on the menu, but they whipped one up for him.  An affogato is an Italian drink/dessert consisting of vanilla gelato and freshly brewed espresso. Mamma Mia! 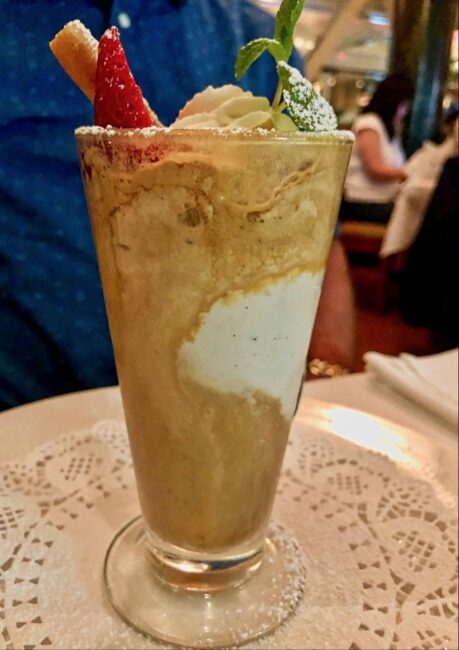 To make the wonderful evening complete, while dining, we were serenaded by a gentleman strolling the tables taking requests. He was quite good, but I had Funiculì, Funiculà stuck in my head for days. 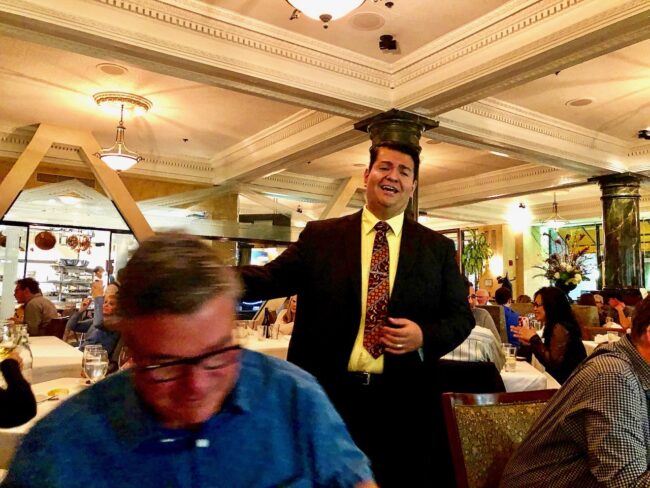 Speaking of music, as we were sitting in the bar for our nightcap … 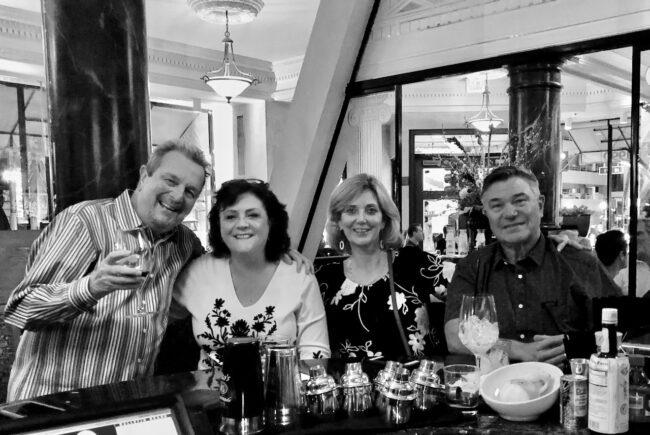 … a song came on that we rarely hear in a public venue, but which has a very special place in our hearts. Harry Connick, Jr.’s rendition of It Had To Be You, which just so happened to be the song for our first dance at our wedding. 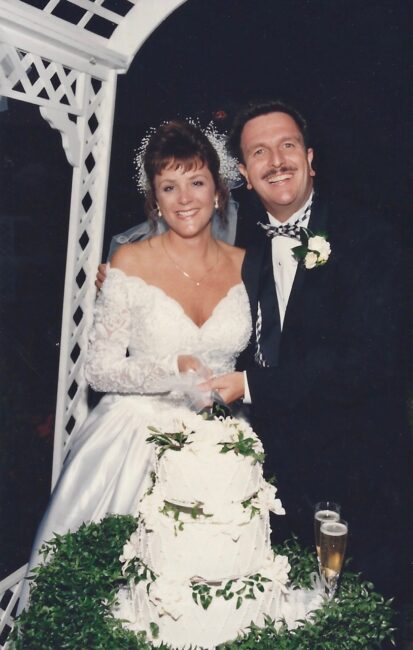 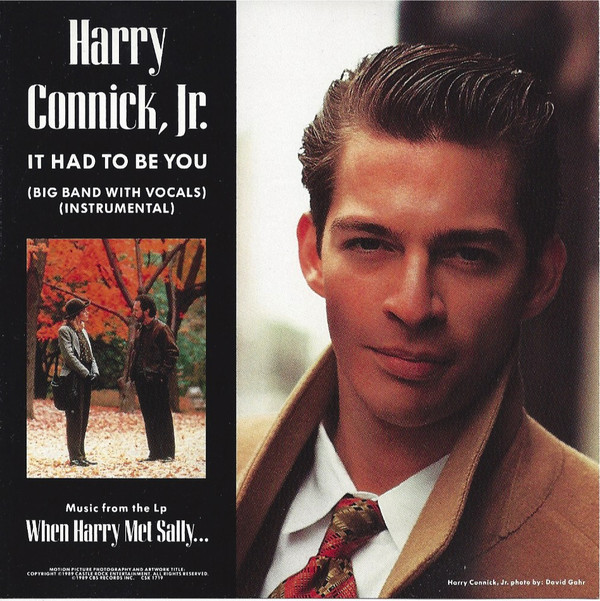 Yet another coincidence? Maybe there is a reason L’Opera, along with Tracy and I, are celebrating our 30th anniversaries (26th of marriage) this year. 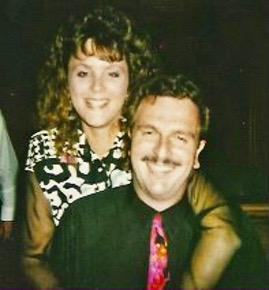 It was a night filled with fantastic memories. Long Beach has certainly changed since that chance meeting (and so have we … damn we were young back in those days).

Who knows, perhaps that evening in 1990 is why Tracy and I have visited Italy so often in the past three decades. “O Sole Mio!” 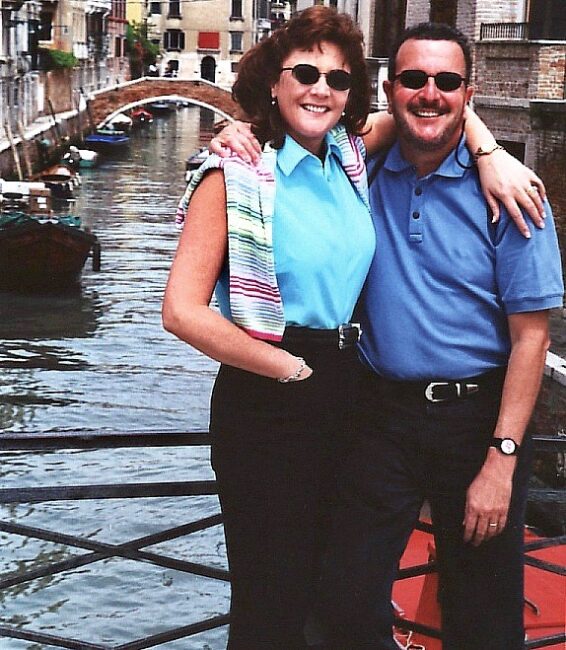