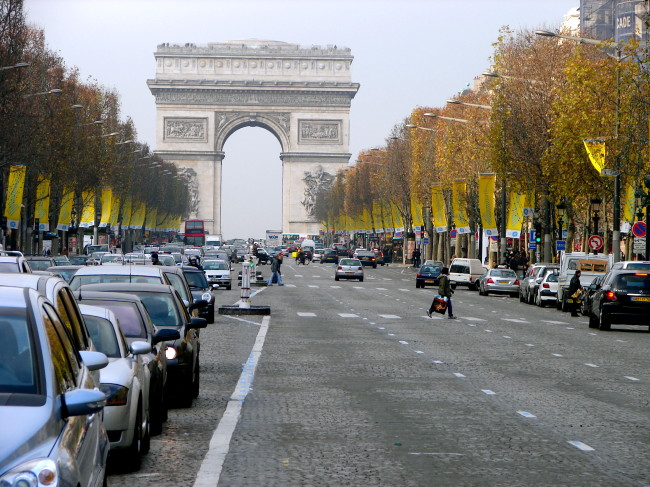 Day Six: The Infamous Rue Cler, A Grand Exhibition, There’s Been A Change In The Weather, The Lilies Let Down, Walk Like An Egyptian and Finally Florimond

We got a pretty early start on the day, and the sky was still blue on Saturday morning, but that would change as the day progressed. 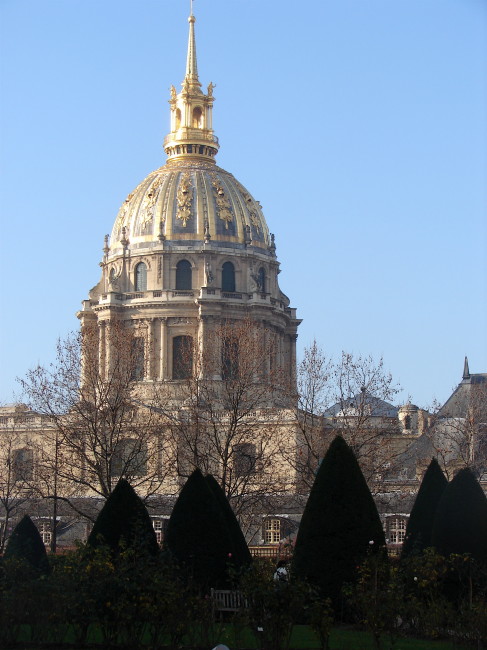 We headed in the direction of the Hotel des Invalides and Napoleon’s Tomb. 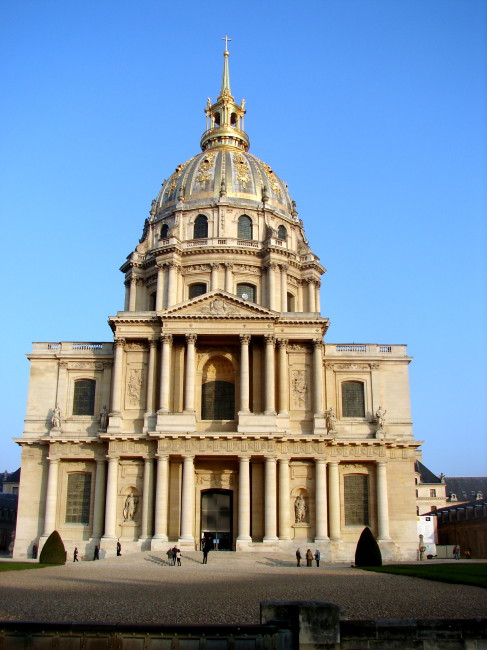 I told Tracy that a few days ago I felt that I should have been staying at the Hotel of Invalids. Tracy sighed a sigh only a husband can understand. “I must need a new writer,” I thought. 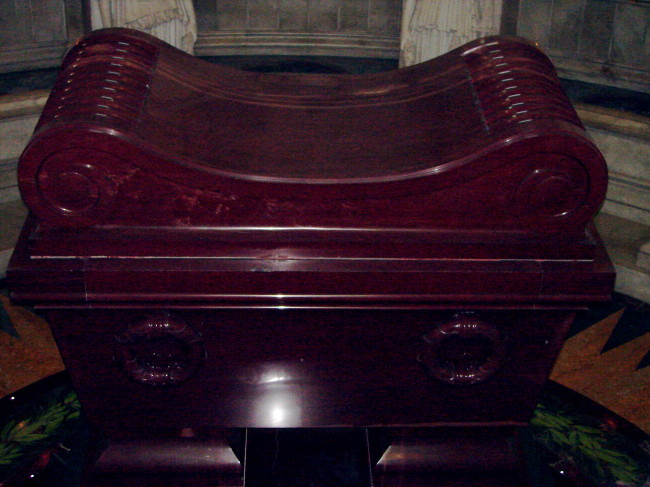 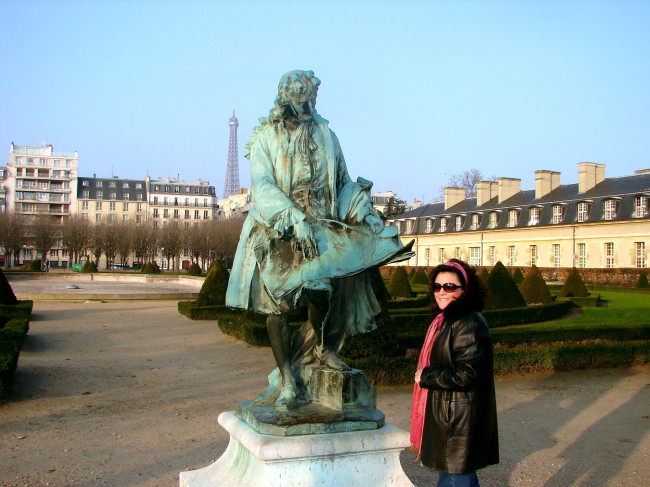 We detoured a couple of blocks down the av de la Motte-Picquet to Le Florimond, a restaurant I have always wanted to go to, but for some reason had not gone to on any of our previous visits to Paris. 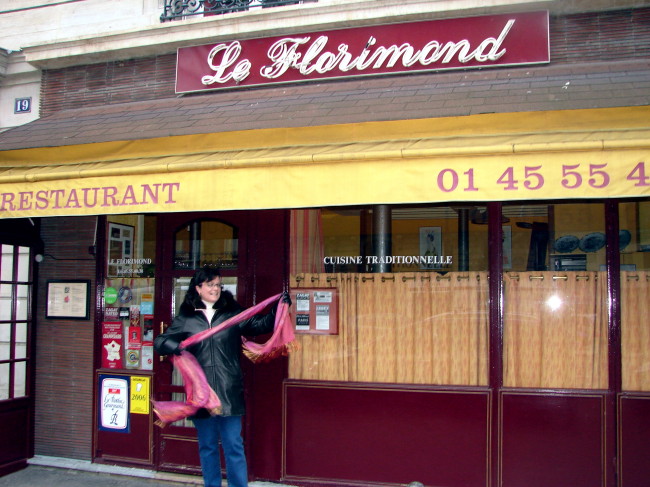 Although early in the morning, the restaurant door was open, so I popped in was fortunate enough to get reservations at 9:15 that evening (fortunate because this was the last night they would be open for a couple of weeks due to the holidays). 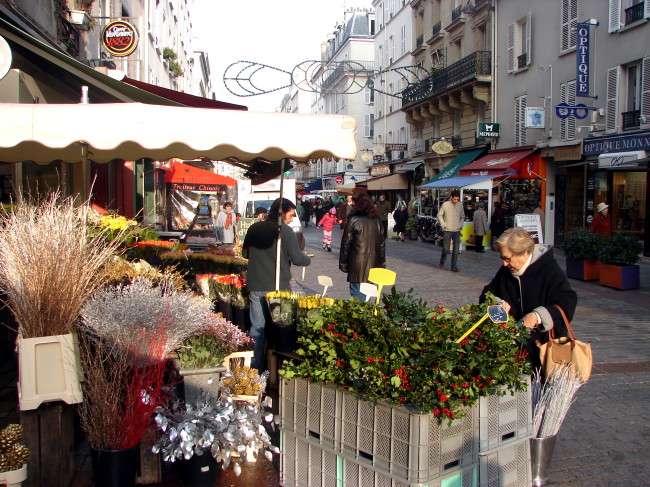 Then it was on to the Rue Cler, a street that has gained the disdain of some, many of who also disdain the man who has sent a plethora of Americans there, that R.S. character. 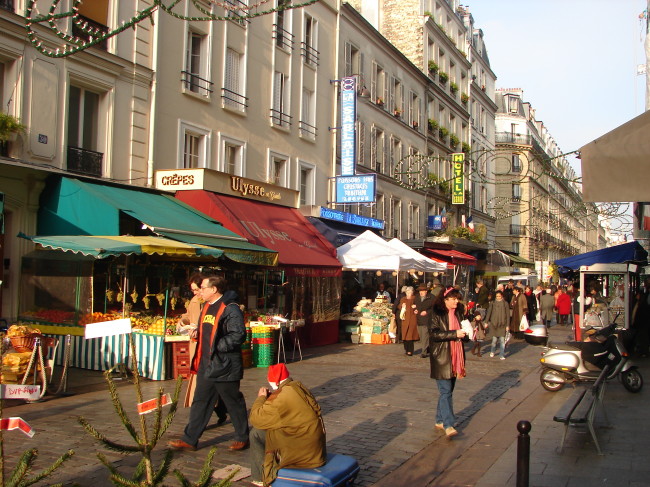 Well gang, we like the rue Cler and have liked it since the first time we visited about 9 years ago. It’s a nice little walking street with cute shops and restaurants, some markets and a damned good pâtissière. 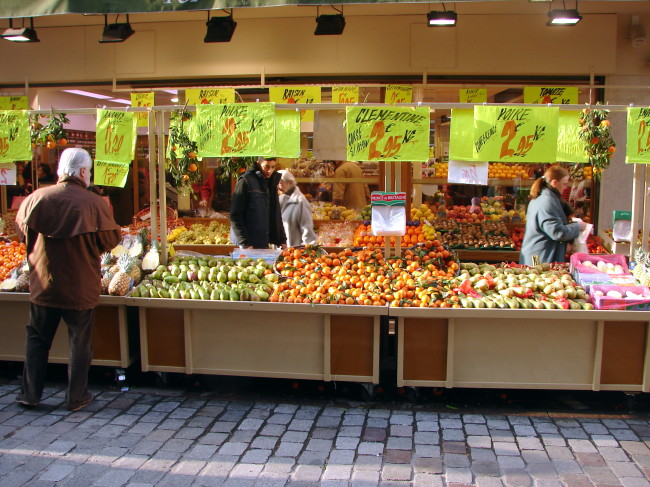 Since the last time we visited, a really cool Italian deli has opened up, and the line was very long. For such a charming little street it certainly conjures up a lot of emotion travel boards, but for us the only emotion was bliss. 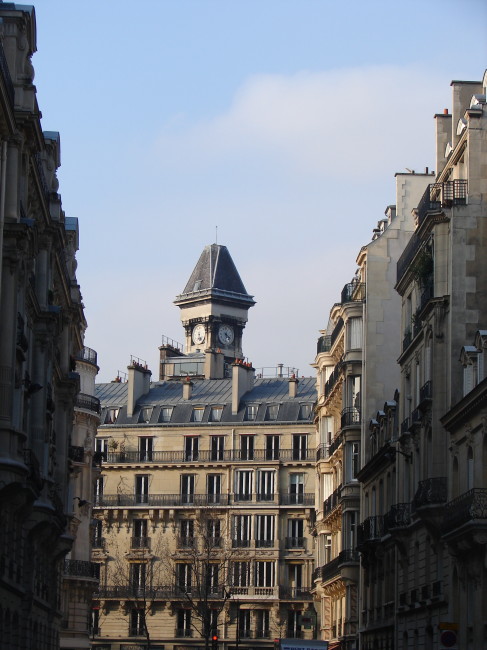 We strolled through the rue Cler and part of the 7th arrondissement looking at some of the neat buildings. 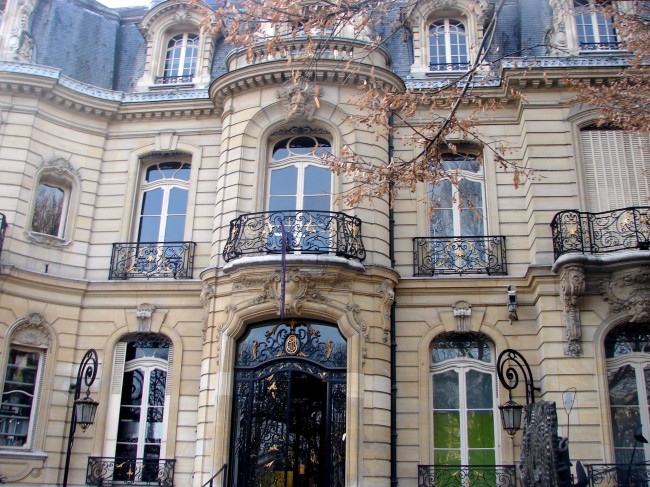 After downing our morning croissants and coffee, we walked across the Seine to the Grand Palais, a building that I have taken many pictures of, but had never gone in. 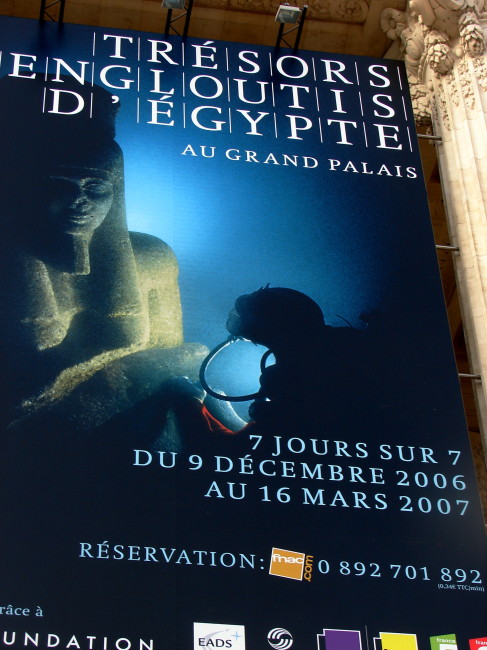 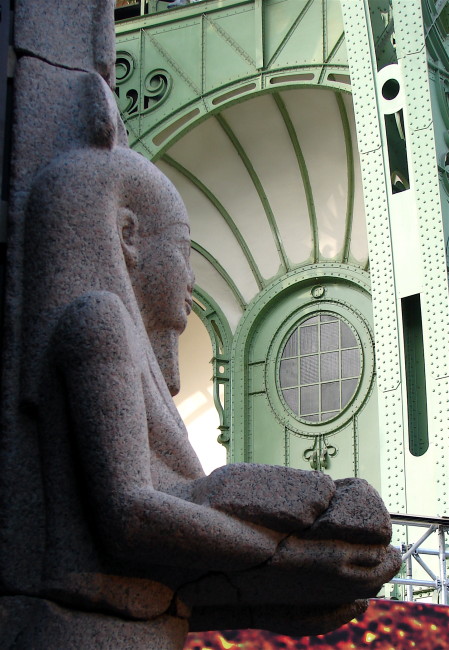 …so finally we got our chance to see the inside of the building. 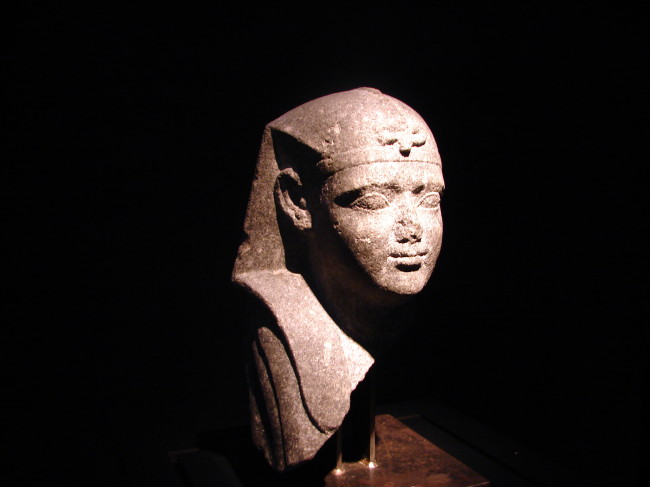 There was an exhibition of some undersea treasures from Egypt on display at the Grand Palais, but truthfully I was more interested in the architecture of the building. 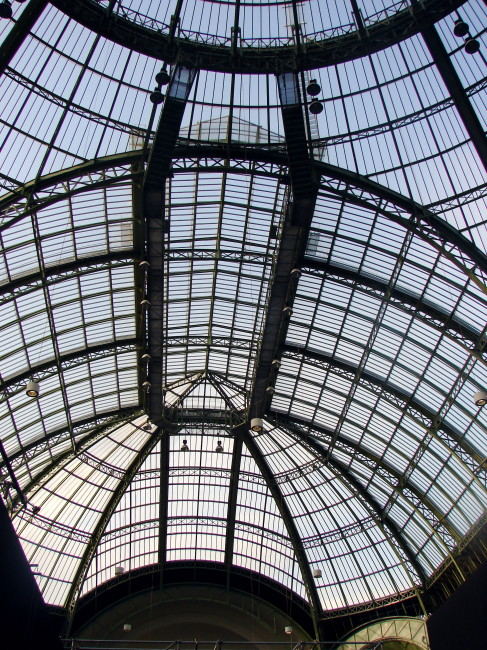 After seeing as many underwater treasures as a couple could see on one viewing (but not as many Egyptian artifacts as you will read later), Tracy and I exited, took a look at the lovely architecture of the Petite Palais… 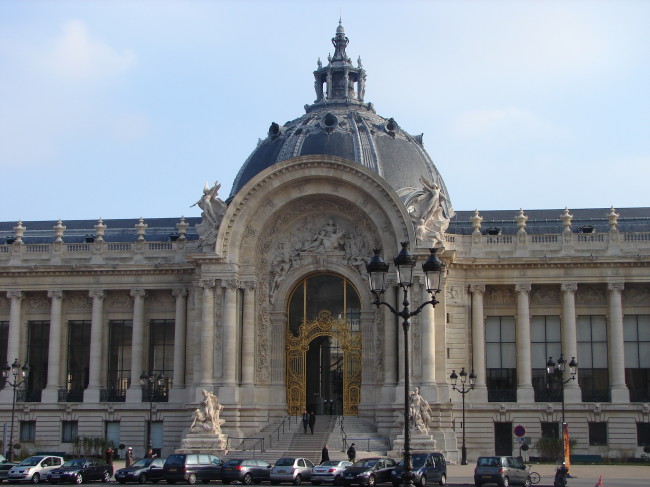 …and walked to the Champs Elysées, the avenue we don’t particularly care for, but since we were in a walking mood, we said, “Why not? Maybe we can find an elusive baby gift.” 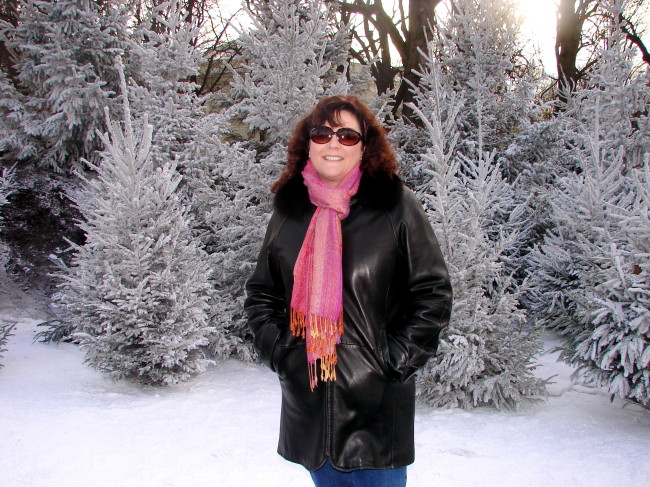 I stopped to take a picture of Tracy in a little area with Christmas trees and fake snow, and she, in turn, took one of me in front of some flocked trees for a winter effect. 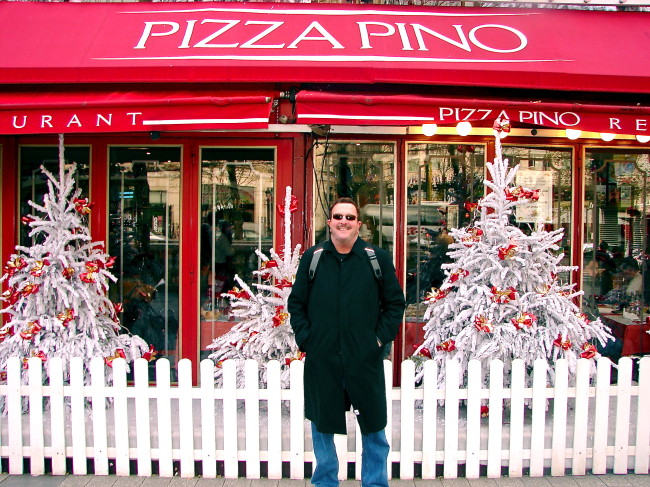 As if on cue, our friend, the sun, started to bid us au revoir for the final time.

Wind, clouds and a drop in temperature replaced our sunny day experience.  As we approached the Arc de Triomphe, glue skies made on more valiant attempt, but soon they were gone…never to be seen again for our entire trip. 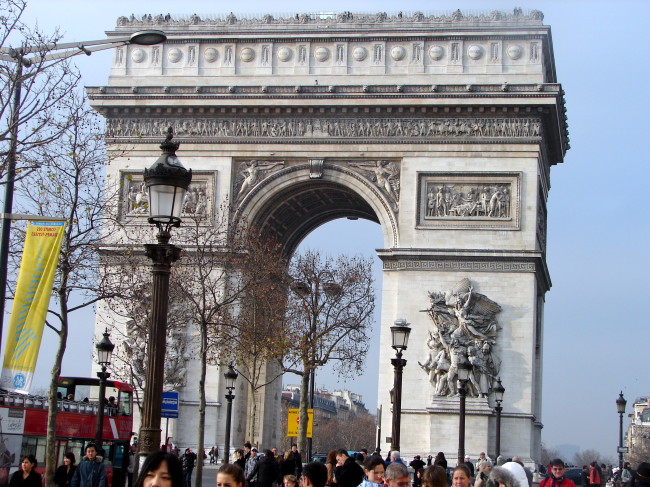 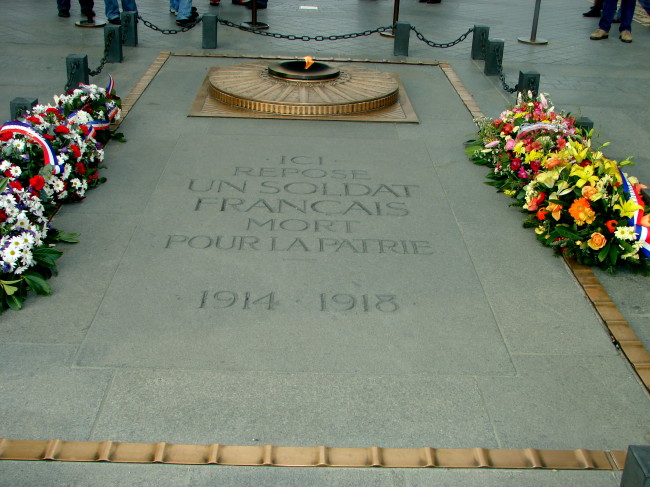 “Every evening at 6:30 P.M. it is rekindled, and veterans lay wreaths decorated with red, white and blue near its flickering flame. It burns in the darkness to recall the sacrifice of an unknown French soldier who gave his life during World War I.”

After visiting the Arc de Triomphe, we headed off to find a place to eat.  We chose the brassiere, L’Alsace.

We enjoyed some onion soup on this nippy afternoon, a nice steak in a béarnaise sauce and pommes frites. It was funny, however, because Tracy’s onion soup came with the cheese already in the soup, while it seemed the French family next to us put their own cheese into their onion soup.  Perhaps a French food expert could explain that little detail to us.

Another wardrobe malfunction nearly cost me dearly as we were to leave. In my futile attempt to be a smooth dresser while buttoning my coat and putting my gloves on, I had forgotten that my camera bag (with my nice camera in it) was still underneath the table. I was so happy I hadn’t knocked any dishes off the table while getting ready to go outside, I had blanked out on the camera.  Fortunately, the alert server found the bag and said, “Look, I now have a brand new camera.” He had a big smile, handed me the bag and disaster was averted. I didn’t feel as badly for over tipping at that point.

It was early afternoon, but it was getting dark fast.  Our next stop was Musée l’Orangerie and Monet’s famous Water Lilies. There was a line to get in, but the old museum pass let me bypass that line to go through security and then the next line to buy tickets. 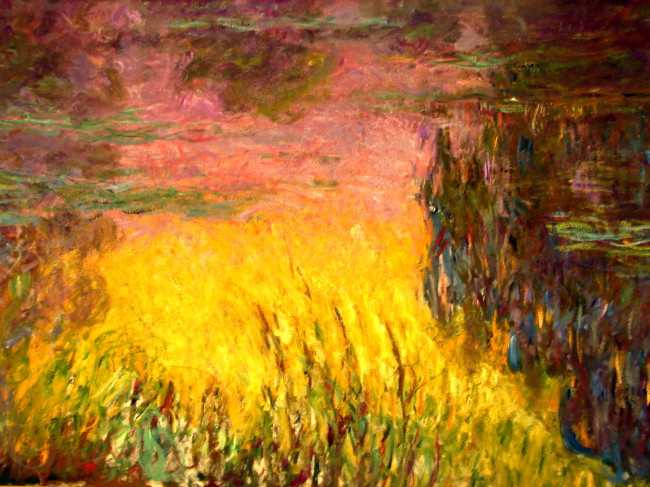 Usually we get our money’s worth by purchasing the Museum Pass, no matter how many days we buy it for.  On this trip, we probably didn’t quite recoup all the money we spent on them, but my favorite part of having one is just watching the faces of people in a long line as we scoot by them through the door and out of sight.  Yes, there is an evil side of maitaitom. 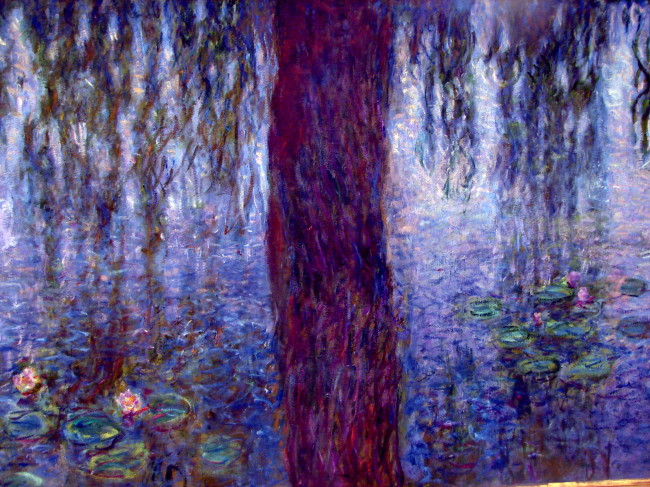 Speaking of evil, many of you might think me even more evil after I give you our short review of the Water Lilies, contained in two rooms at the museum. I will preface this by saying I like a lot of Monet’s paintings. We really did not care at all for the Water Lilies. Maybe it was because it was so much in one contained area or maybe the expectations were so high, but the whole thing fell flat for me. It sort of looked like a big Blob, one that didn’t star Steve McQueen.

There are more paintings downstairs, and we didn’t really like those exhibits either. Of course, we aren’t art critics nor do we play ones on television, so I think you should go and see for yourself whether you enjoy this museum. 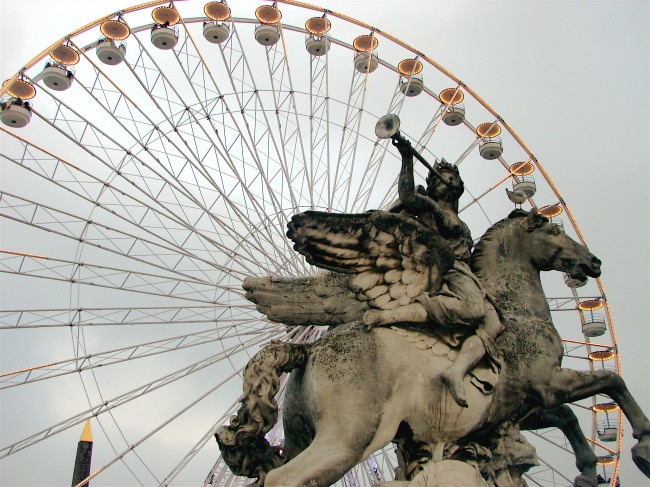 After a visit to a bookstore across from L’Orangerie, we walked down to the Louvre. The Ferris Wheel was in full motion, and the birds had a birds-eye view (what else would they have). 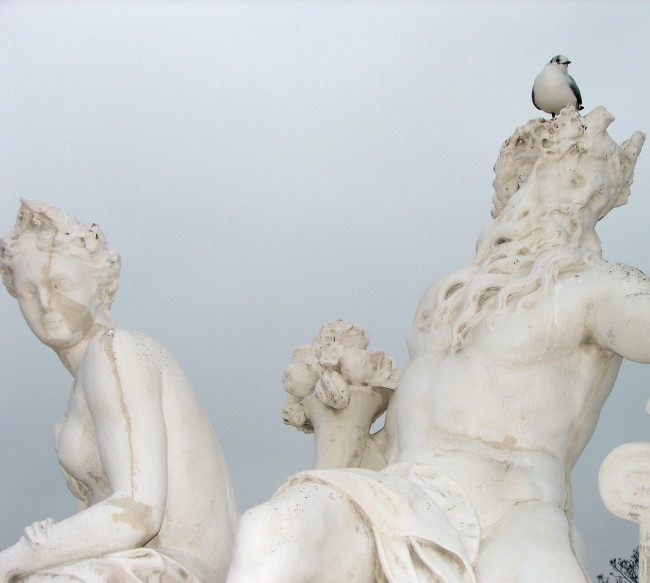 Unfortunately once we reached the Louvre there were no people waiting in line to taunt with our museum card, so in we went. 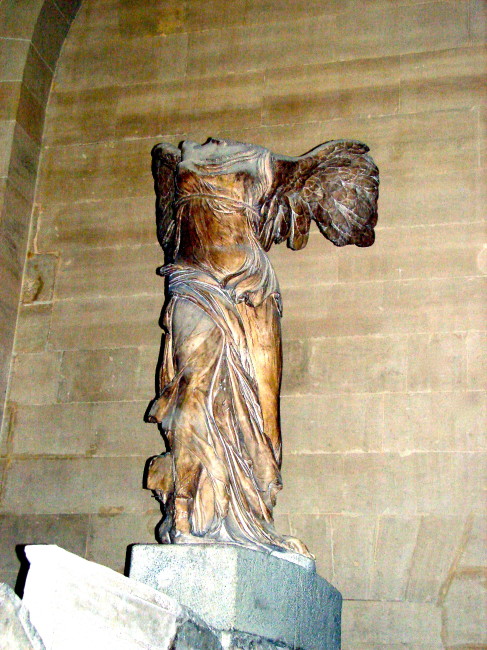 The Mona Lisa has never been one of my favorite paintings (although I don’t dislike it), but after talking with Michael the day before, I wanted to see it in its “new” place in the Louvre. Michael had said “the paintings in the room with Mona” were better complements than the ones where she had been before, and I agreed. We saw some of the other greatest hits, too, including the “Farewell To Arms” statue, which goes by another name. 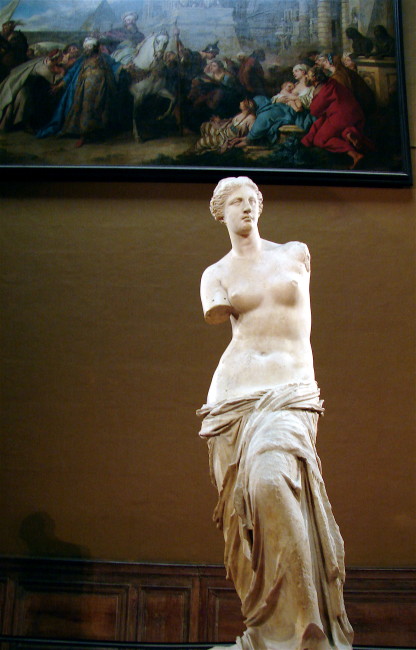 I did see my favorite Louvre painting, The Coronation of Napoleon (courtesy of ABC Gallery), by Jacques-Louis David.  Actually, I liked many of his paintings and have a goal to learn more about the artist. 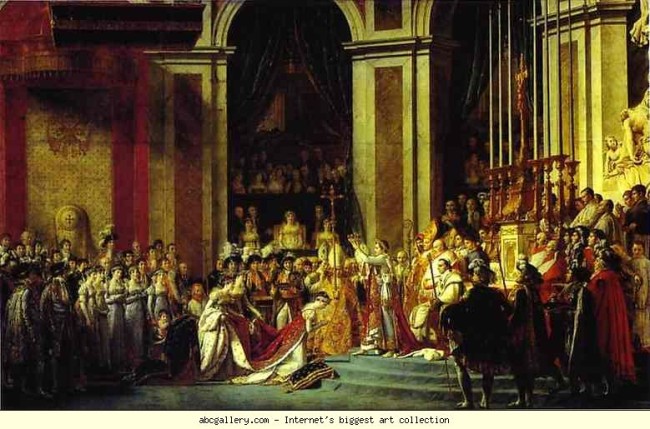 After walking around for a while, both Tracy and I (well, really our legs) decided it was time to head back to the hotel.

It was at this point that Tracy and I found the Twilight Zone of the Louvre. She thought she had found a sign for the exit, but instead, there’s the signpost up ahead, we had been transported to “The Egyptian Zone.” I swear I saw Rod Serling’s face behind an Egyptian mask.

For the next several hours (ok, it wasn’t that long, but it seemed like it), we saw more sarcophagi than King Tut’s relatives. At one point, I felt like putting on a pith helmet and excavating for ruins. Now I know why they put a pyramid over the damned thing. I looked up and saw that it was almost early evening, but I was just happy it was still Saturday. 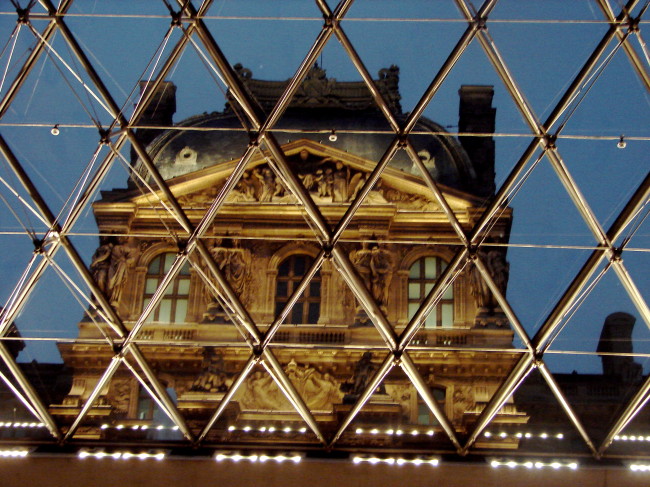 We then bought some baby gifts at the overpriced Louvre ‘R Us store and proceeded back to the hotel.  Since we didn’t have reservations until 9:15 p.m., and it was still relatively early, what can two healthy (relatively anyway) Americans do to pass the time? Umm, we’ll skip that part, but the champagne that followed was delicious.

Finally, it was time to go to Le Florimond, which has been mentioned on many travel boards frequently. It is quite small, and since we got there a little early (I call it American early dinner-interruptus), we had to wait for a few minutes in a little space between the door and a curtain, which had been put up to keep the cold wind out when the door opens. I asked Tracy if there would be applause when the curtain opened, and she pretended to be French.

We walked in moments later and were seated next to the small bar (coincidence, I think not). Florimond is the type of place that screams “charming little French bistro.” Tracy started with some champagne while I had their special drink (now dubbed a Florimond in their honor), which has fresh squeezed orange juice, vodka and Grand Marnier. It was served in a champagne flute, so it isn’t “your ordinary screwdriver.”

When we ordered, I thought our server looked familiar, and sure enough, it was Ray Romano. I was glad to see he had a job after “Everyone Loves Raymond.” 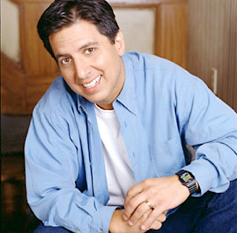 Of course, it wasn’t really him, but he looked like him and was actually a little bit funnier than Ray.

Dinner was good…especially mine. Lobster ravioli was followed by the face-a-face, which was a delicious steak served with a side of beef stew (beef, it’s what’s for dinner!). Tracy said her cabbage dish (grandma’s recipe, I believe), wasn’t the greatest, but she still loved the restaurant thanks to the ravioli dish and her new favorite ice cream for dessert.

The whole dinner was topped off with a chocolate pastry-type thing (sorry, I’m not a food critic) with dark chocolate ice cream and a mandarin sauce. Tracy had the three glacés of vanilla, dark chocolate and her new favorite, caramel. She also said that her chocolate glace was “an intense dark chocolate.” This is a place we will definitely return to on our next visit, and I would recommend it wholeheartedly.

When we got back to our hotel, it was after midnight, and we realized it was Christmas Eve. There were no presents to wrap, no pie to bake to bring to my sister’s house and no decision on who was to be the designated driver. I was in total vacation mode.