The Proof is in The (Bread) Pudding 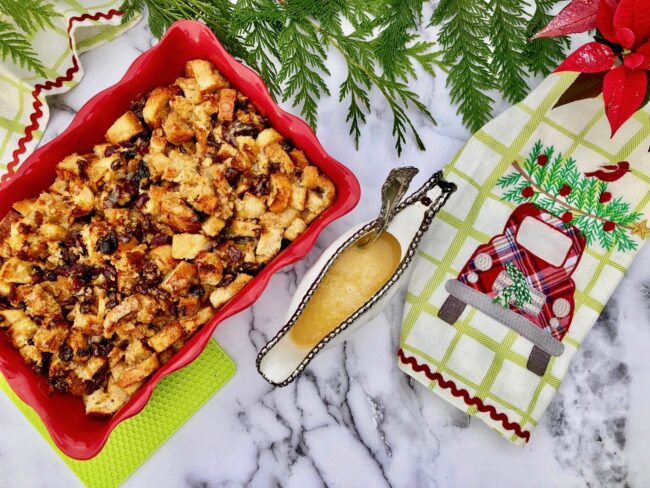 This Cajun Bread Pudding is one of the most requested desserts at our holiday parties. It is tied for popularity with Tom’s Famous Black Russian Cake, both of which are easy to make and guaranteed to Wow! your friends and family.  Tom always dresses up for the parties. 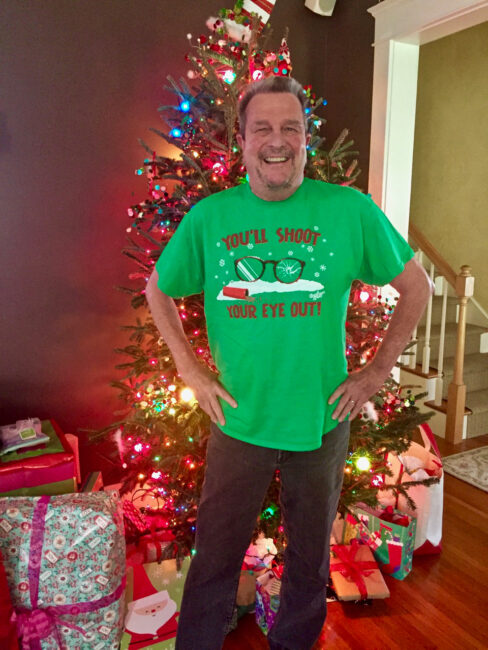 If you Google bread pudding recipes you will get 177 MILLION results! So why should you give mine a whirl? Because the combination of the raisins and cinnamon in a moist, custard-like interior together with the Jack Daniels sauce remind me of an adult version of cinnamon rolls. Yum, yum, yum!

I have been making this recipe so long, I don’t recall why it is called Cajun Bread Pudding, but I do remember it came out of a New Orleans-style cookbook, and that Jack Daniels sauce really “kicks it up a notch” to borrow a phrase from Emeril. You can make the sauce without the Jack Daniels, but unless you have a dietary restriction, use the Jack! It is divine. Kind of reminds me of spiked eggnog.

This recipe is not a make-ahead dessert, as it is best served warm, right out of the oven. However, if you assemble all the ingredients ahead of time, it is easy to throw together at the last minute. Cut the bread ahead of time. Combine the dry ingredients in a large Ziplock. Whisk the eggs, milk, vanilla and orange zest together, cover and refrigerate until ready to use. This way nothing has to be measured when combining. Let the bread mixture soak for an hour before dinner and then bake while you are eating, so it is ready to go come dessert time. Don’t make the mistake I did one year and forget to turn the oven on!

I usually use cubed French bread but during the holidays I sometimes use panettone, especially if Tom has purchased eight loaves of panettone … true story (proof below). We were eating bread pudding and French toast for months. 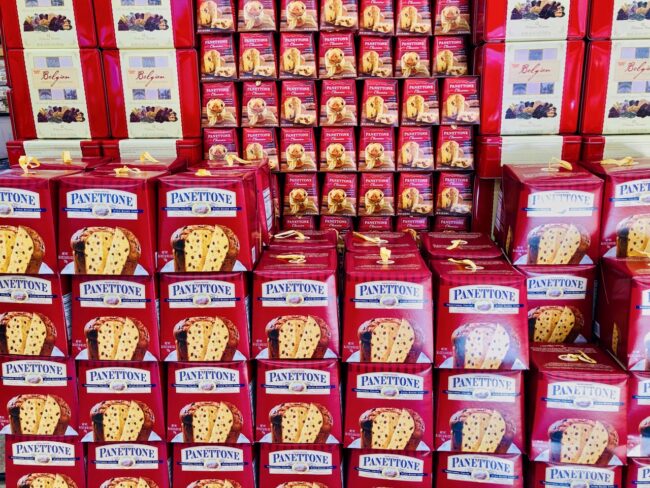 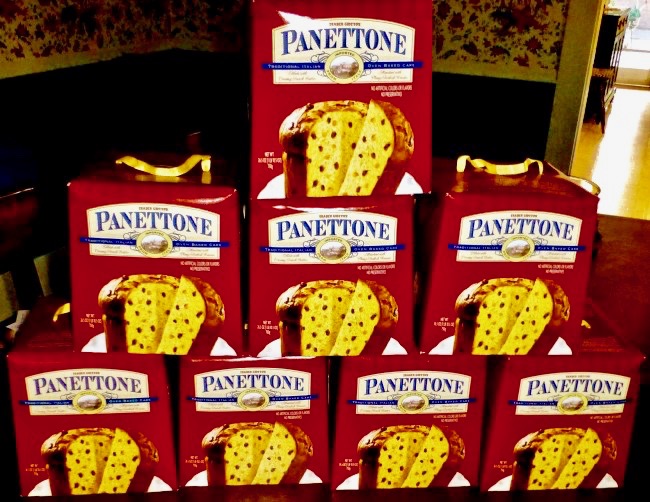 Panettone is an Italian type of sweet bread loaf originally from Milan which is available pretty much everywhere this time of the year (we get ours at Trader Joe’s). If you are using panettone instead of French bread, you will need fewer raisins as there is dried fruit already in the panettone.

I use a combination of black and golden raisins. However, on my last foray to Trader Joe’s I noticed they had a blend of dried fruit called “Golden Berry Blend” consisting of golden raisins, cherries, cranberries and blueberries. That sounded tasty so I used them for this recipe together with a handful of black raisins. Use whatever you like best or have on hand! 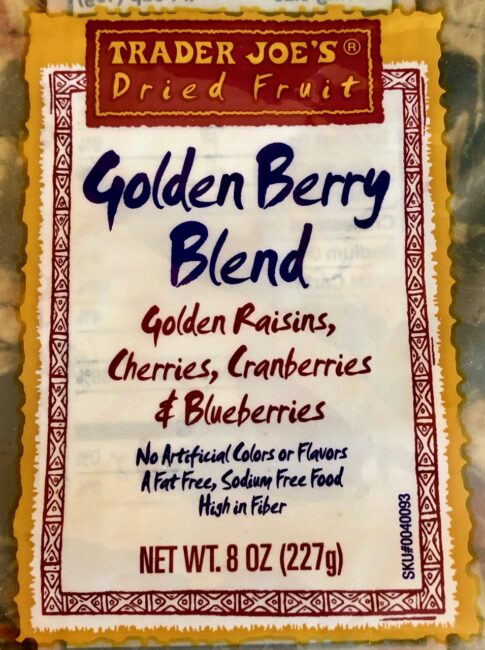 As for the cinnamon, we really like cinnamon, so I put in at least two tablespoons (yes tablespoons). I mix the cinnamon into the sugar and just kind of eyeball it until it looks like something you would put on cinnamon toast. If you haven’t tried it, the Penzys Cinnamon is a spicy sweet blend of four cinnamons (China, Vietnamese, Korintje, and Ceylon cinnamon) which we love and highly recommend. 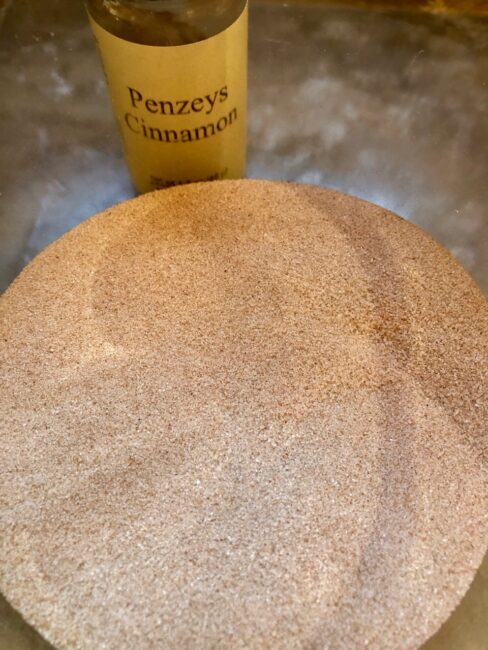 I am sure this will become a family favorite because it’s simple to make, not too sweet and never too dense. The orange zest adds a lovely citrus note and the Jack Daniels sauce is the perfect accompaniment. 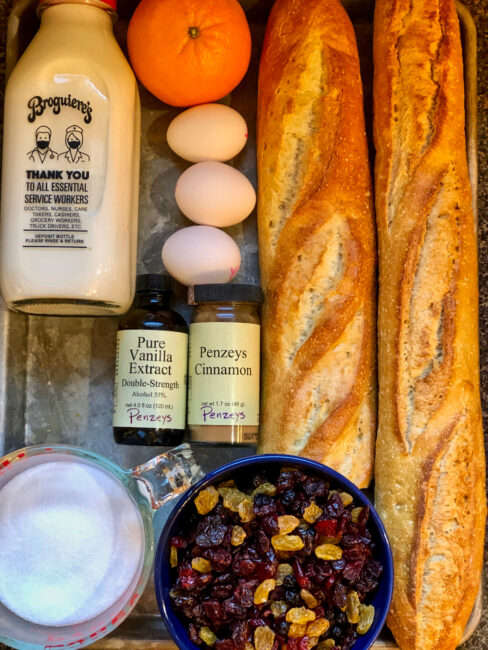 In a 9 x 12 x 4 inch baking dish, combine the cubed bread and milk and let soak for an hour, stirring occasionally so all the bread gets evenly soaked.

In a small bowl, whisk the eggs, orange zest and vanilla together. In a medium bowl, stir the sugar and cinnamon together and then add the raisins. 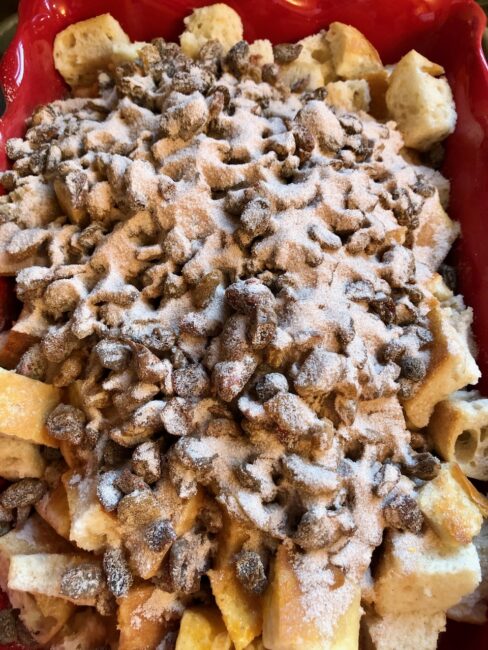 Fold the wet and dry into the bread mixture and mix well. 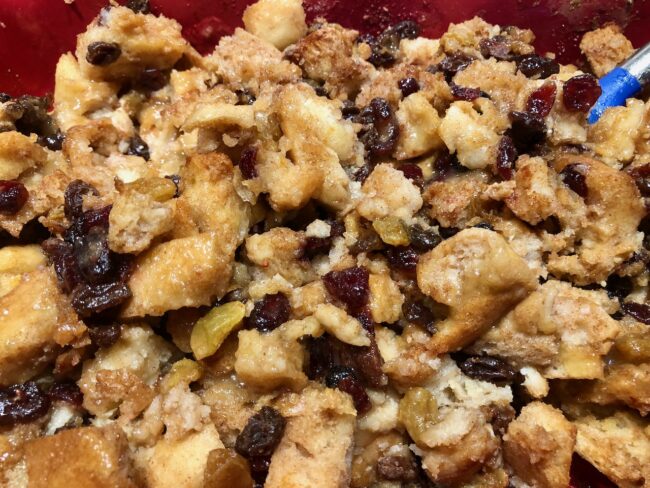 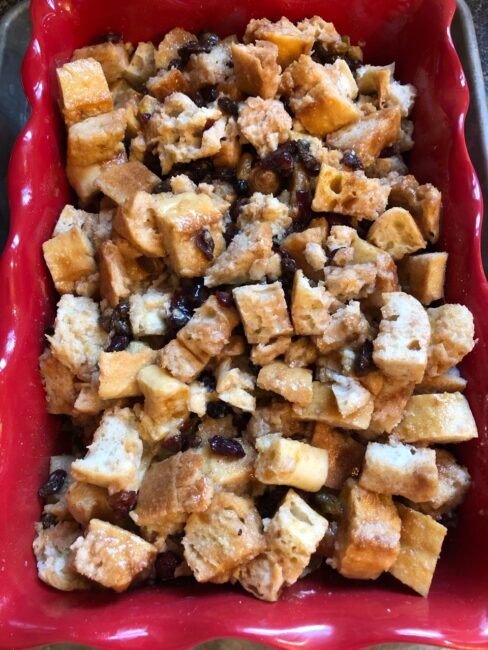 Bake one hour until a knife inserted into the pudding comes out clean. Do not overcook or it will be dry.

As soon as you take the pudding out of the oven, make the Jack Daniels Sauce. 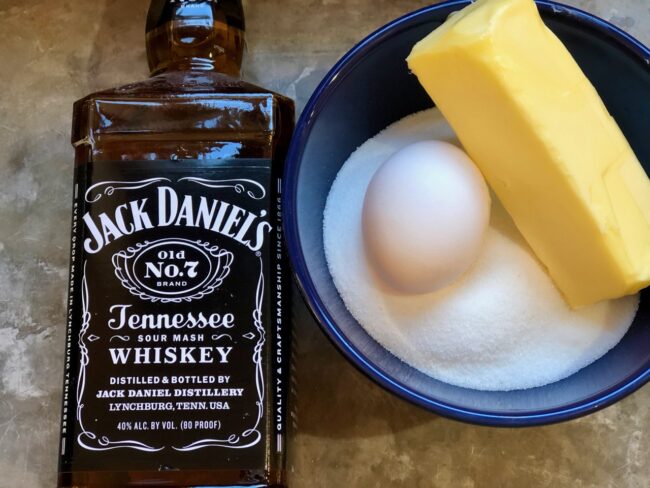 In a small saucepan over medium-low heat, whisk the beaten egg, butter and sugar until the butter is completely melted, about 5-6 minutes. (Note: Do not use a higher heat or the egg will scramble.)  Remove from heat and allow to cool for 5 minutes. Stir in the Jack Daniels. 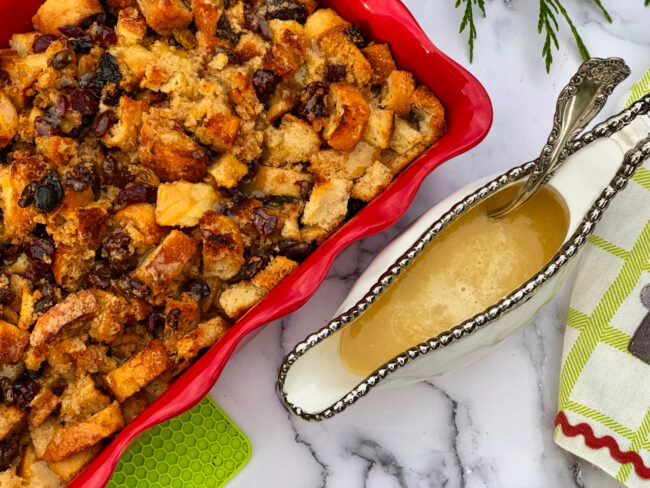 Serve the sauce in a small pitcher or gravy boat so guests can pour as little or as much as they want over the bread pudding. 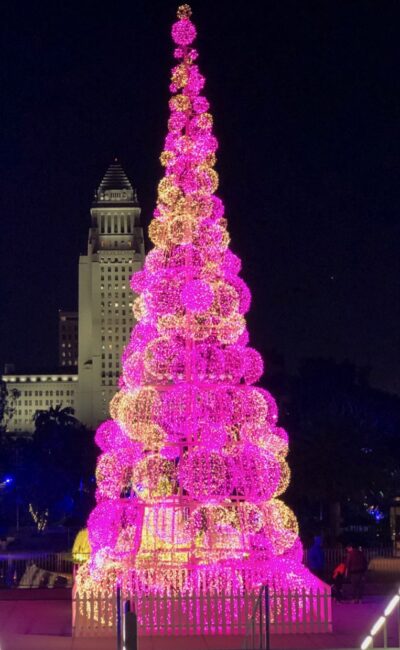 The bread pudding is best served warm. It also makes for a great breakfast the next day.