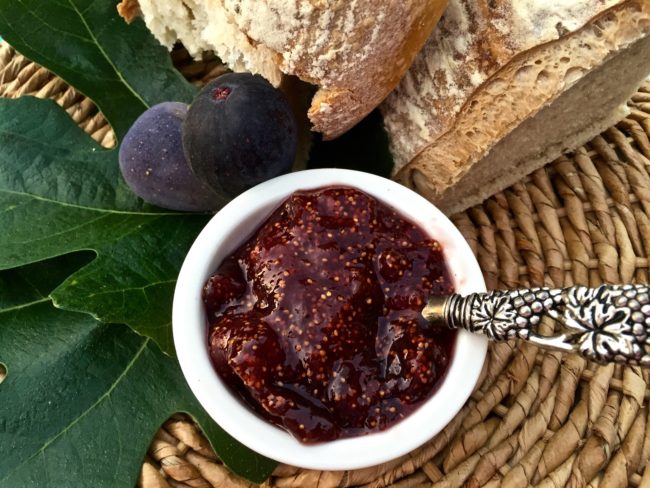 Our neighbor has a gorgeous fig tree that fortuitously hangs into our yard (as does her luscious lemon tree).  Never having been a big fig fan, each year I would pick them to take to the office where they are scooped up like hotcakes and they tell me they are delicious. 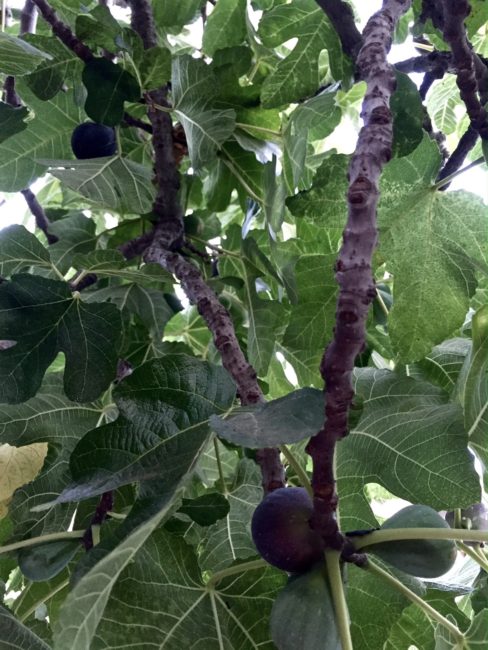 After a friend shared Jill Silverman Hough’s Drunken Fig Jam recipe with me, I decided to give it a try with this year’s crop.  The original recipe appeared in the October 2008 issue of Bon Appetit and calls for brandy, although I read reviews of people using sherry, white port, and other liquors.  We (that would be me, although Tom did do the grocery shopping) decided to give the recipe a whirl and use bourbon and vanilla beans. 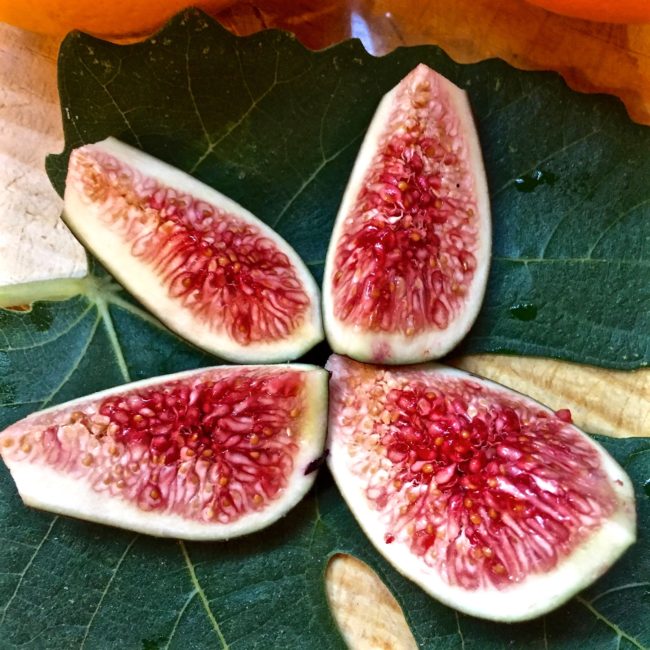 Our figs (well, our neighbor’s figs) are very sweet, so I decided to follow the suggestions of other reviewers and reduce the sugar.  I also used the juice from one of the lemons as a portion of the liquid.   The fruit macerated for an hour before the cooking started.  It took an hour for it to cook down and thicken and smelled like a Manhattan (which, coincidentally, Tom was drinking as I was making the jam) while it was cooking.  Yum! 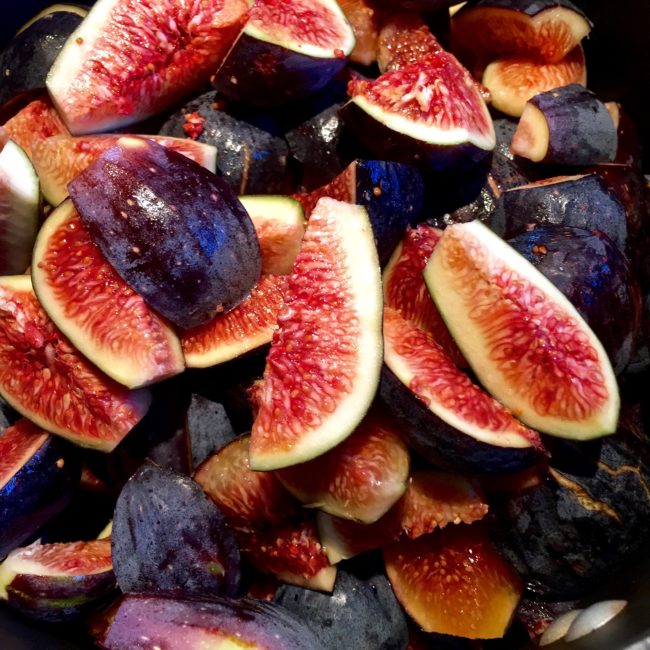 By this time it was 10 p.m., and I was ready to be done, but I still needed to “can” the jam.  Right then I had a flashback to my Nana and all the things she canned over the years, so I sort of knew what I needed to do.   I boiled the Ball canning jars and their lids in a big pot of water and spooned the fig mixture into the jars.  I ran a knife around the inside of the jar to be sure no air bubbles and then screwed the hot lids onto the jars.  The jars went back into the boiling water for 10 minutes, and then I left them out on the counter to cool overnight.  The next morning I was very pleased to hear the “pop” when I opened the jar which indicates that I had sealed them properly.  Whew!

This is a good tasting jam with mild notes of vanilla and bourbon.  It would be excellent paired with fresh, crusty bread, some prosciutto, and cheese.  I couldn’t really taste the lemon.  I had zested the lemon as some reviewers thought the lemon was too strong.  But I think next time I will cut the lemon peel into matchsticks as the original recipe suggested rather than zesting it to see if that boosts the citrus.

Despite starting late in the day (Note to self: do this on the weekend, not after work), this was a fun and easy recipe, and I think I’m going to try my hand at some other jams.  If I have success, I will be sure to share with you here in Tracy’s Kitchen. 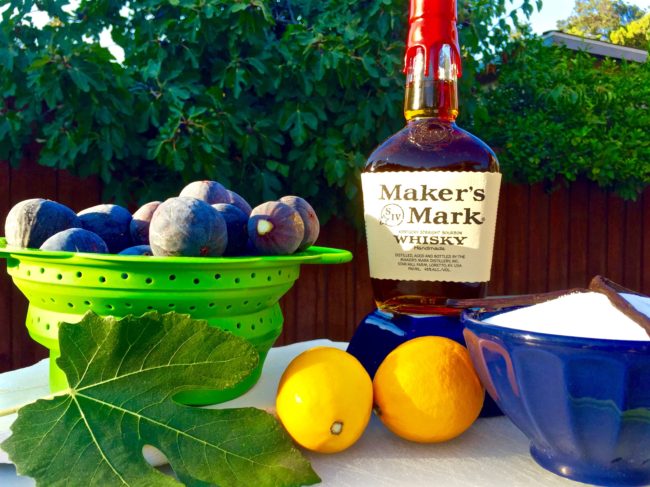 Ingredients:
2 sweet lemons (Meyer if available) – either zested or cut the peel into tiny matchsticks if you want to taste the citrus more
4 pounds ripe fresh figs (mine were black), stemmed and cut into quarters (about 9 cups)
2 vanilla beans (split in half lengthwise and scrape the vanilla seeds out with the end of a sharp knife)**
2 ½ c. sugar
½ c. bourbon (or brandy, Cognac, sherry, or your liquor of choice)
¼ c. fresh lemon juice 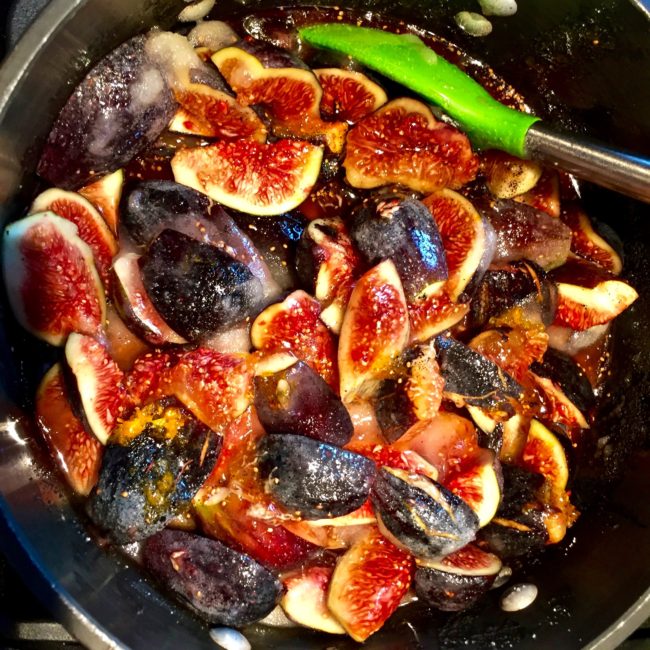 Bring fig mixture to a boil over medium-high heat, stirring until the sugar dissolves.  Reduce heat to medium and continue to boil until the jam thickens and is reduced by about half (Don’t worry if it looks a little thin as it will thicken up when it cools).   Stir frequently and occasionally mash the mixture with a potato masher to crush the larger fig pieces.  This took about an hour.  Remove from heat. 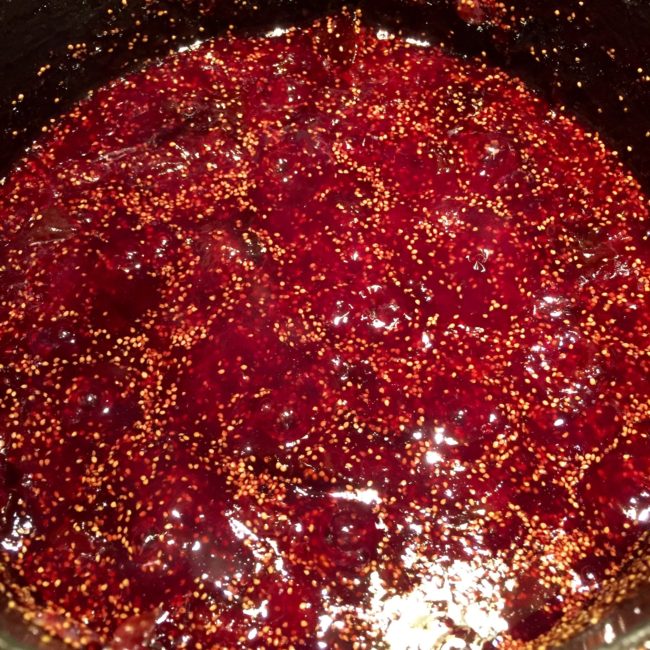 Canning:
Once the fig mixture is almost done, boil your canning jars and lids in a large pot of water.  Carefully remove from the hot water with tongs.  Ladle the fig mixture into the canning jars leaving ¼” space at the top of the jars.  Run a knife around the inside of the jars to remove any air bubbles.  Wipe jar threads and rims with a clean damp cloth so they don’t stick shut.  Cover with hot lids; apply screw bands.  Return the jars to the boiling water for 10 minutes.  Carefully remove from water and let cool completely on the counter with a rack or towel underneath.
Paraphrasing from the Ball Canning Guide:  To check lids for a seal, the lids should not flex when pressed in the center.  Remove bands. Try to lift lids off with your fingertips. If lid can’t be lifted off, the lid has a good seal. Replace bands. 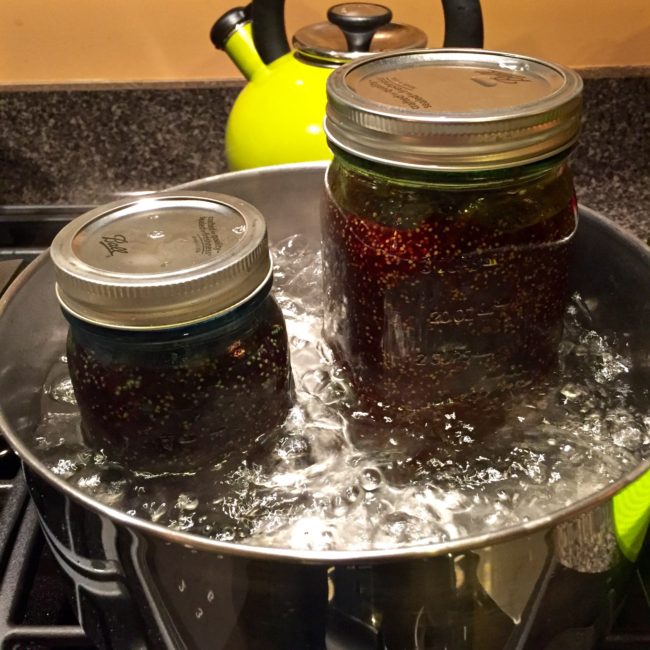 The original recipe says this can be stored in a cool dark place for up to a year.  Being a jam newbie, I had no idea how long they should be stored, so I put mine in the refrigerator for safekeeping (and also since we knew we’d would start eating it right away).  Enjoy!

** 1 vanilla bean is equal to 3 t. vanilla extract; don’t throw away that leftover vanilla pod!  Put it in a jar of sugar to make vanilla scented sugar. 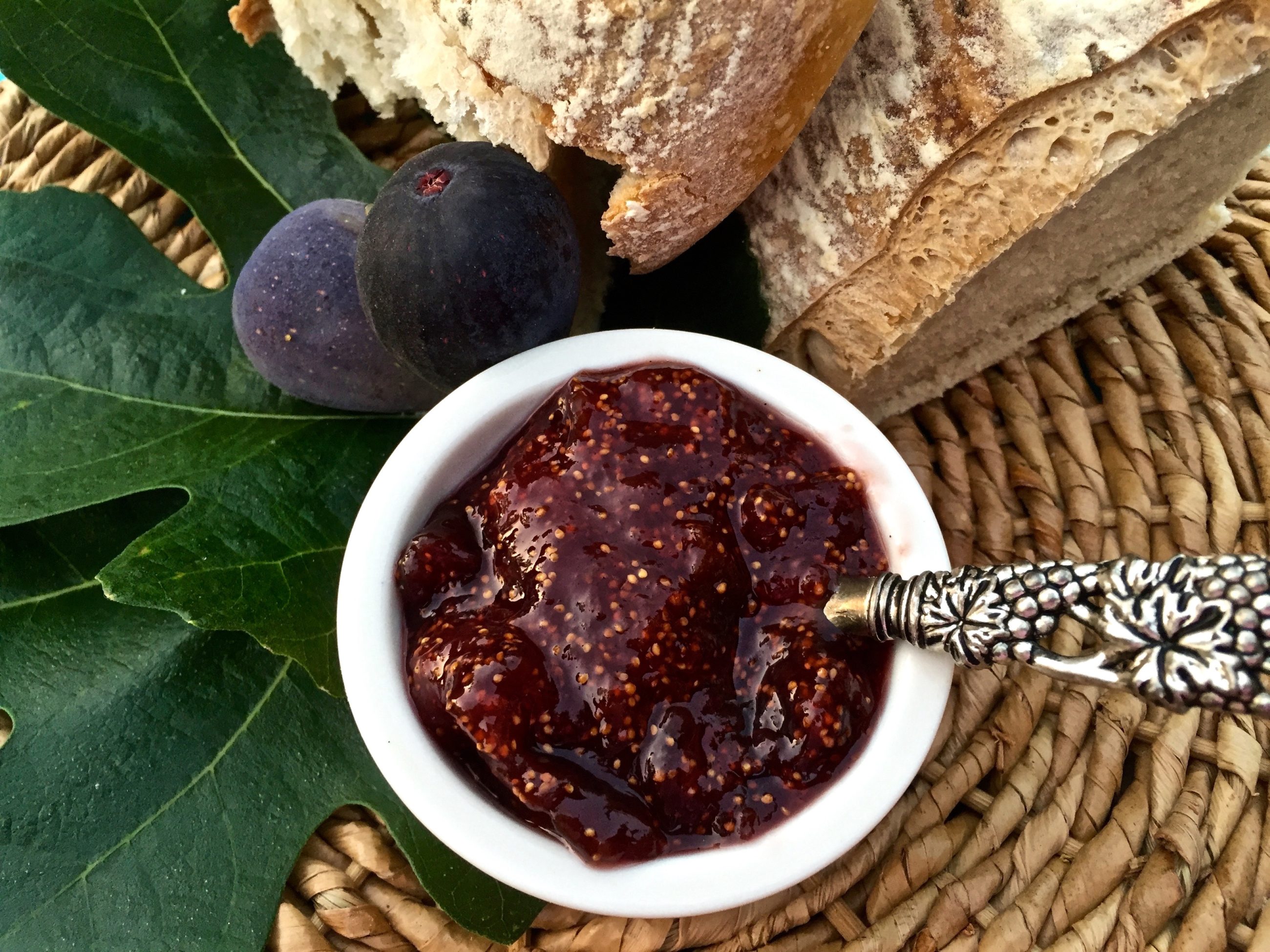