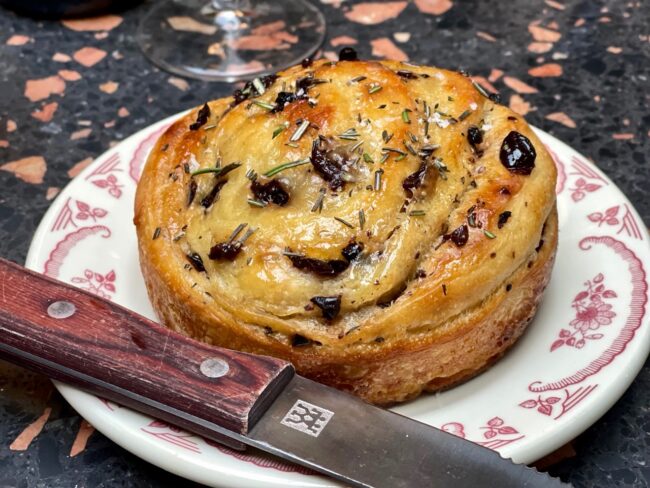 Every so often, I turn to a website called The Infatuation to get some ideas of places to dine. I’m so happy I did not look at their review of the relatively new Italian restaurant Bacetti located in an Echo Park neighborhood near Dodger Stadium. If I had, we might have missed out on one of the best restaurants we’ve dined at in the past couple of years. 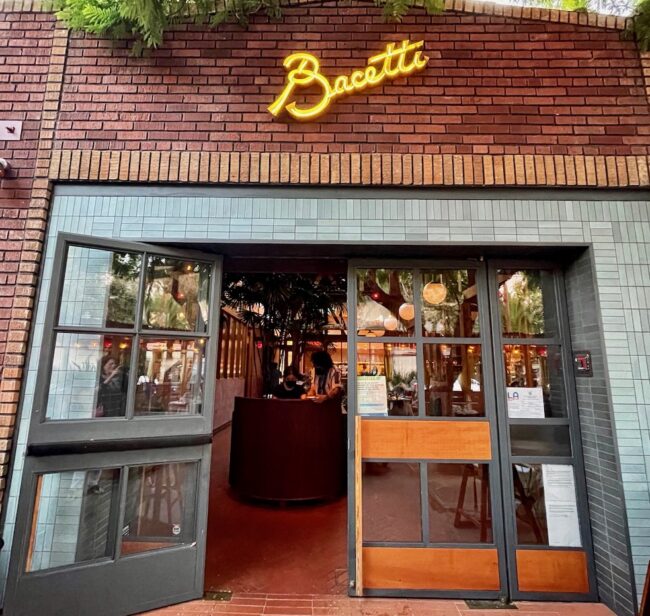 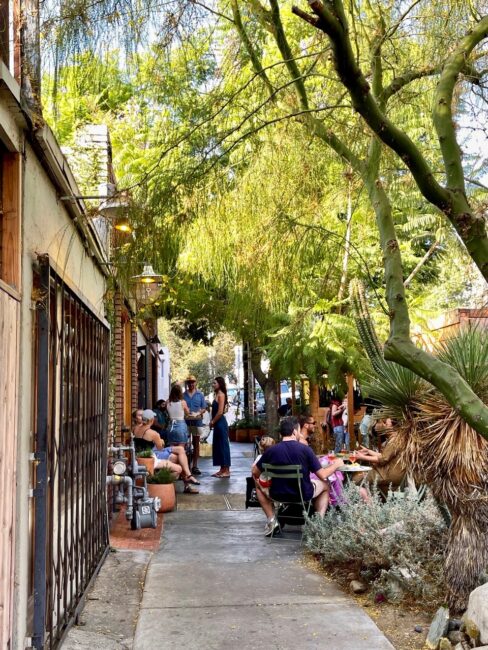 The restaurant has a good pedigree. The chef at Bacetti is Joel Stovall, formerly of the Michelin-starred Orsa & Winston. The location is a surprise, basically in the middle of a residential block in Echo Park. The 1920s building has been transformed into a sleek restaurant with two dining rooms and an outside patio space. There is also the open kitchen where our soon-to-be great food was being prepared. 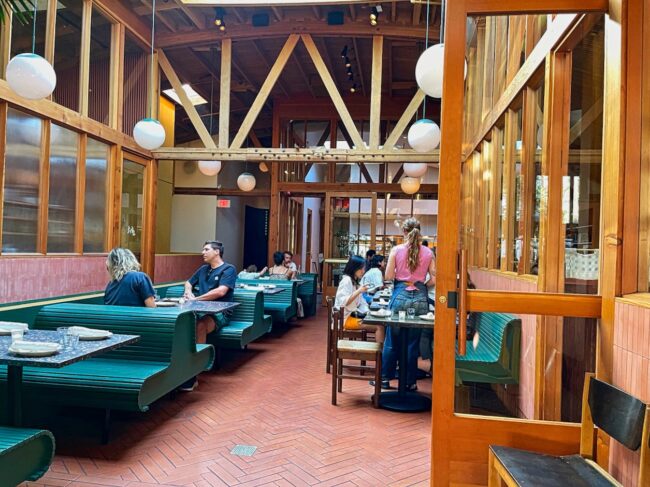 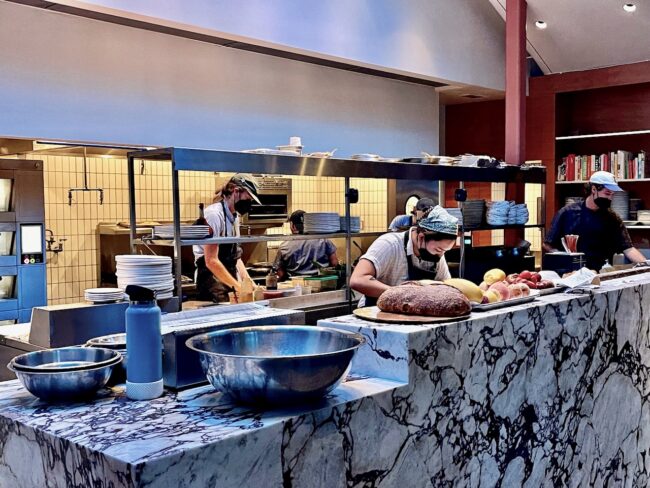 On our first trip to Bacetti, we dined with friends Jeff and Cecilia. Our table shared the Focaccia Ebraica with Taggiasca olives, currants, rosemary and sea salt. Wow, and I mean Wow! How do I describe this? It looks like a cinnamon roll, but it is actually a savory focaccia rolled into a flaky, crunchy spiral that shatters when pulled apart and melts in your mouth with a salty, sweet deliciousness. It’s too small for four, but easily shared by two people or, better yet, get your own.

We also shared the Suppli Cacio e Pepe starter with pecorino and black pepper. (Suppli are a street food from Rome consisting of an oblong ball of rice stuffed with various fillings, similar yet different from arancini which is from Sicily.) This was a really flavorful risotto rolled into a ball, stuffed with the cacio e pepe and fried. There were three on the plate making it harder to share. I really wish restaurants would serve items in even numbers for sharing. Other suppli on the menu this evening included the Suppli Verdi with basil, spinach and mozzarella and the Supplie di Lasagne with spinach, zucchini, eggplant and ricotta.

To accompany our pasta dishes we ordered a serving of Broccolini with walnuts, garlic, and colatura which our server said was an Italian fish sauce. Tracy, Jeff and Cecilia all ordered the Mafaldine pasta with short rib ragu and Parmigiano which they loved. (While I am glad they liked their meal, I prefer when we all order different items so we can check out more of the menu. Harrumpf!) 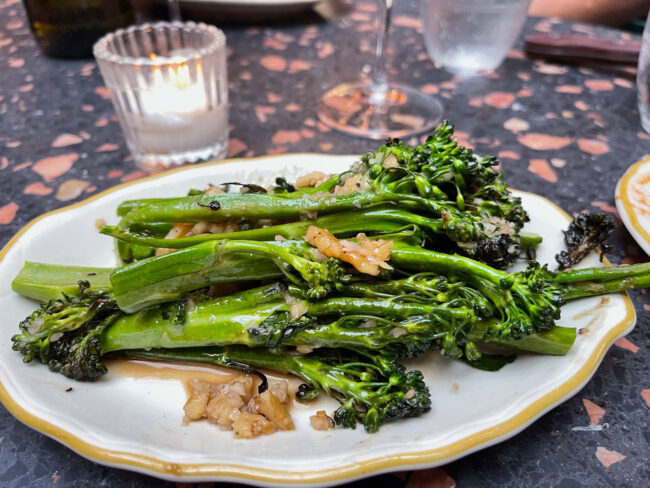 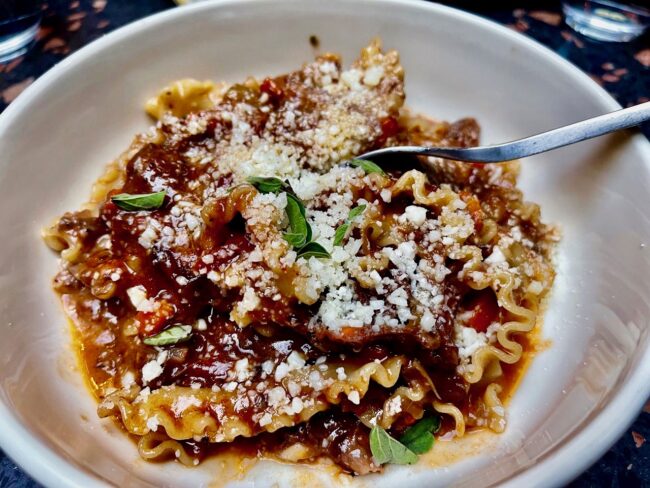 I went with the Tonnarelli alla Carbonara with guanciale, pecorino and egg yolk. This was a terrific dish and was topped with just the right amount of guanciale and pecorino. Both of these pasta dishes earned Wows from our discerning diners. 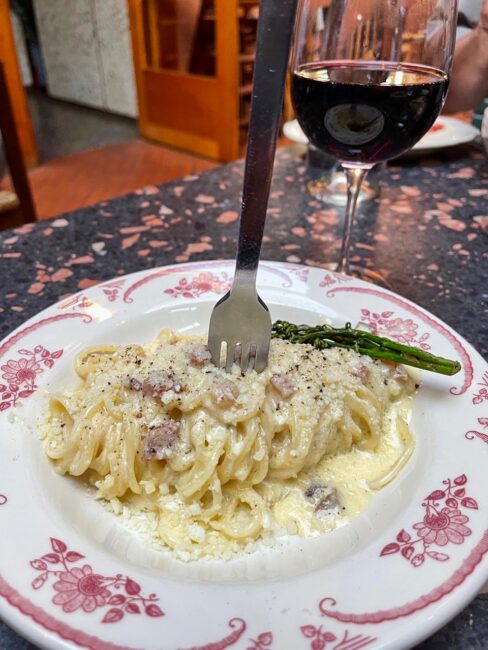 None of us felt the need to sample any items from the Carne e Pesce section of the menu as it was a tad expensive ($90 for 15 oz. dry aged ribeye; $49 for braised lamb shank). As we dined, Jeff asked if I had seen the review from The Infatuation. I had not, and when he showed it to me I was incredulous. I can only assume that the person who wrote it was having a bad day, because it could not have been further from the truth. 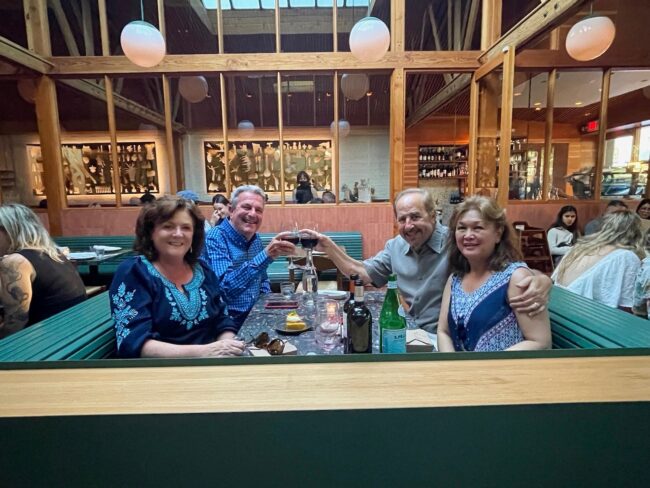 No skipping the dolci on this evening. For dessert we shared the outstanding Ciambellone, flourless Cara Cara orange-almond cake with mascarpone cream, Wow! We also tried an equally delicious airy Merina, pavlova with strawberries, hibiscus and honey whipped cream. 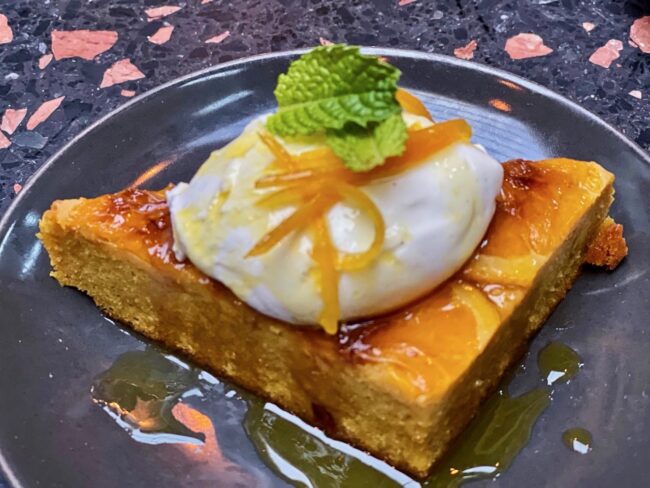 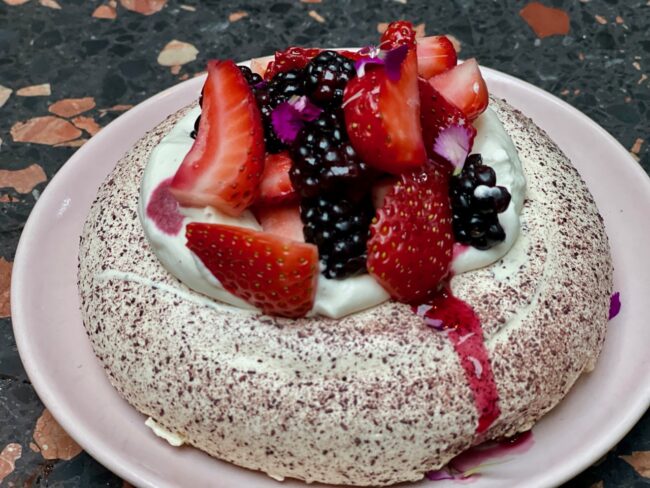 By the time we left, the place was packed. 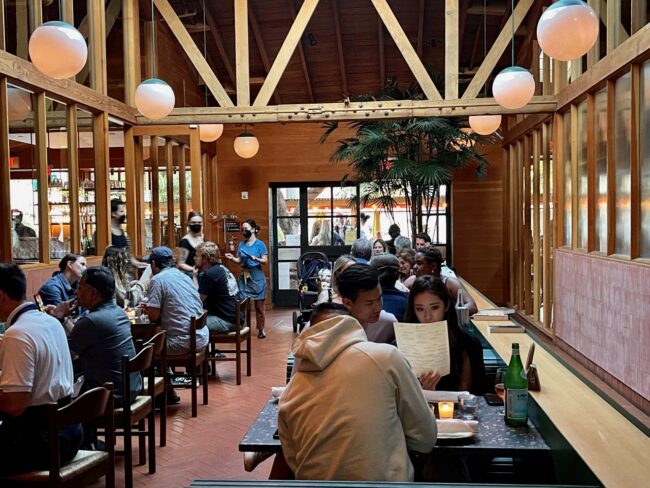 I knew we had to return and a few weeks later we made a repeat appearance with our friend Paul. Paul had already dined here a few times so I was eager to hear what his thoughts were about Bacetti. He had told us he had greatly enjoyed each meal. We waited in the bar area, where we each had a glass of its (expensive) wine. 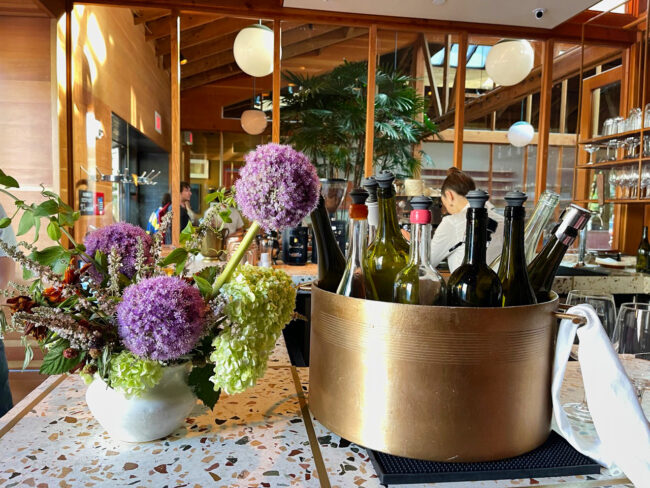 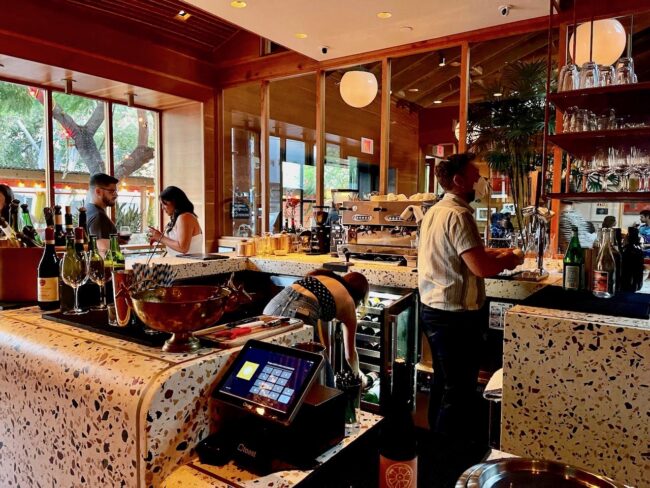 On this night, I made (asked politely) Tracy promise to order something different this time, well except for the Focaccia Ebraica, which truly is a masterpiece in baking. The menu had changed slightly, and we started with the focaccia and the Bruschetta Carne Crudo, beef tartare, capers, whole-grain mustard aioli. Wow! Good stuff. The mustard aioli added just the right amount of heat to the tartare. You might say it was tare-iffic. 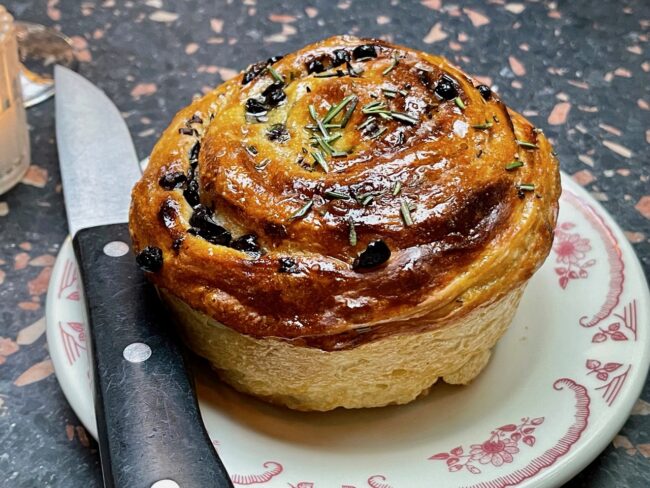 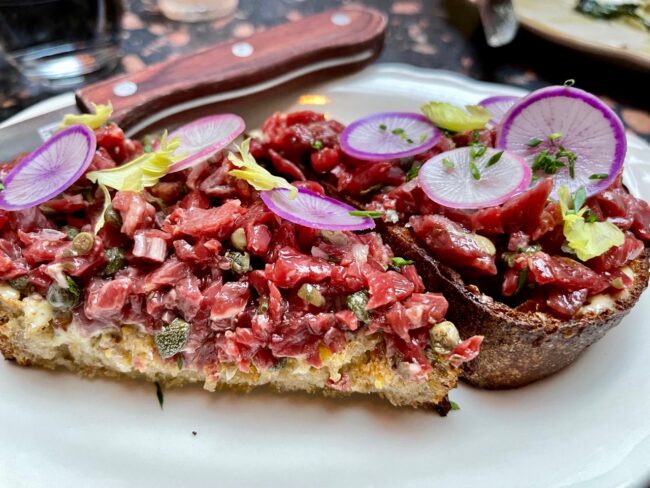 We followed that with part of our 5-A-Day by ordering the Broccolini along with the Verdura Gratin, market greens, pecorino and spinach cream… melted pecorino… yum. 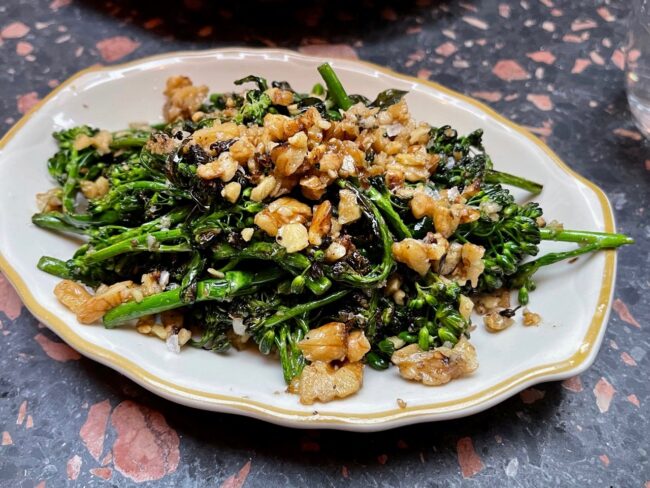 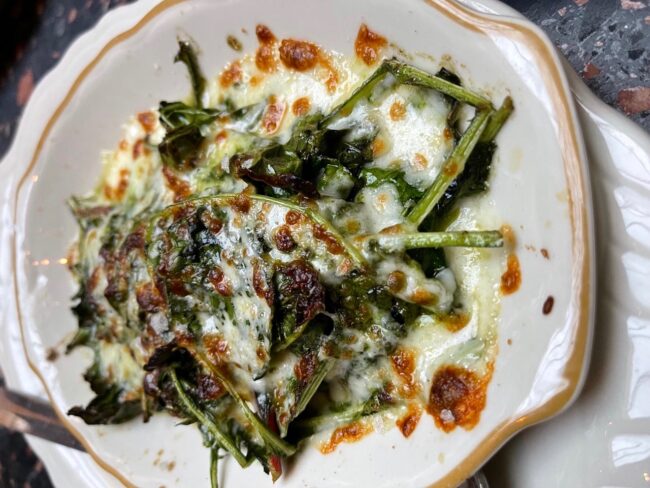 For dinner, Tracy and Paul went with the Campanelle al Limone, pasta with lemon, grilled asparagus and brown butter. This dish was light and lemony. Tracy’s not positive, but she thought it tasted like they used her favorite Meyer lemons. 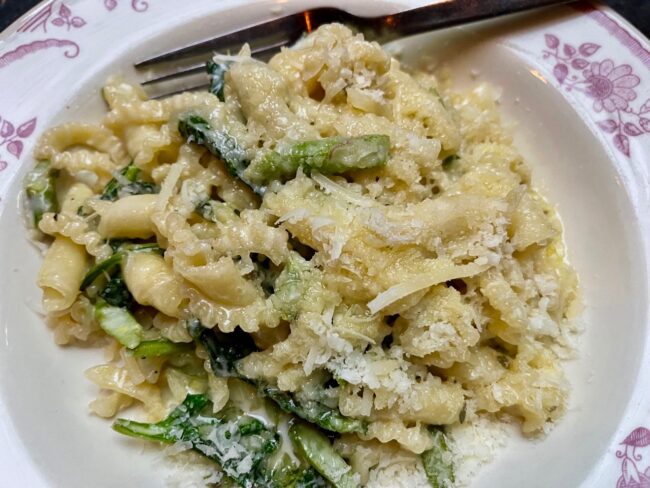 Despite swearing not to order something we already had tasted, I succumbed to the siren song of the Mafaldine pasta with short rib ragu. Just as good as previously. 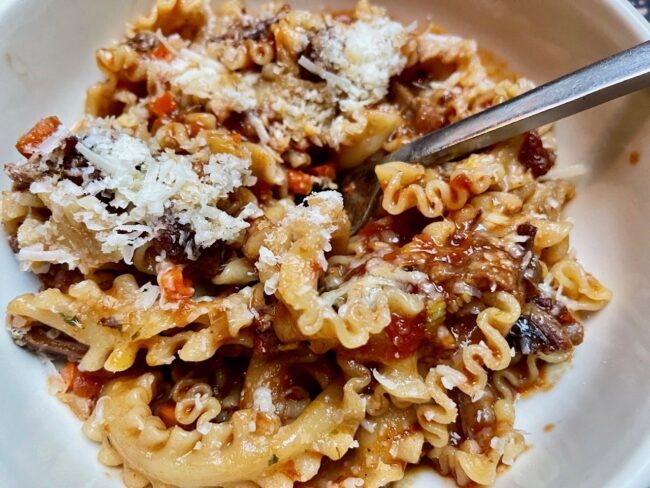 We saw lots of pizzas whizzing by and they smelled great. Paul has had the pizza here previously and recommends giving them a try.

We finished yet another great meal with two spectacular desserts. The Crostata di Pesca, peach crostata with vanilla gelato and basil. Although I didn’t taste the basil, the gelato was flecked with vanilla bean and was delectable. 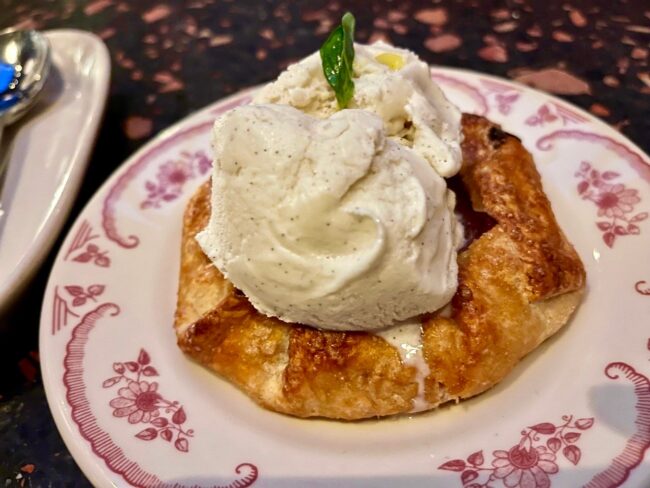 We also shared the Frollino, semolina shortcake with strawberries, crème fraîche and hibiscus agrodolce. Look at those gorgeous strawberries. Perfect! They really look good from every angle. 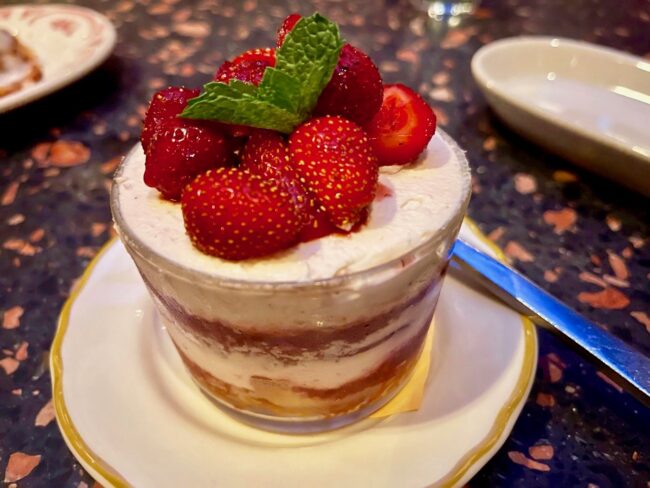 Corkage is a rather hefty $30, but the wine list is pretty expensive so it might be best to bring your own bottle of vino. Tipping is not optional as a 20% gratuity is added to your check. And don’t try to pay with cash, not accepted here.

Parking is tough as this is a neighborhood location, but there is a valet available for $10, or you might get lucky like we did and score some street parking. Allow extra time if there is a Dodger game as people cut through this area to get to and from the Stadium.

MaiTai Tom Tip: If you arrive early (or stay late), there is a cozy, sister wine bar next door called Tilda. It also serves some small plates if you’re in the mood for wine and a small meal. 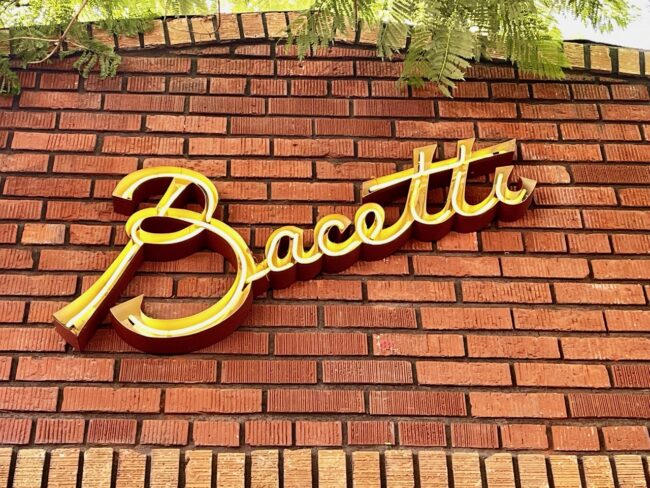 Bacetti ticked every box for all of us from food to service to ambiance. Every dish we tried was satisfying, and some were off the-chart delicious. Simply, a fantastic dining experience.