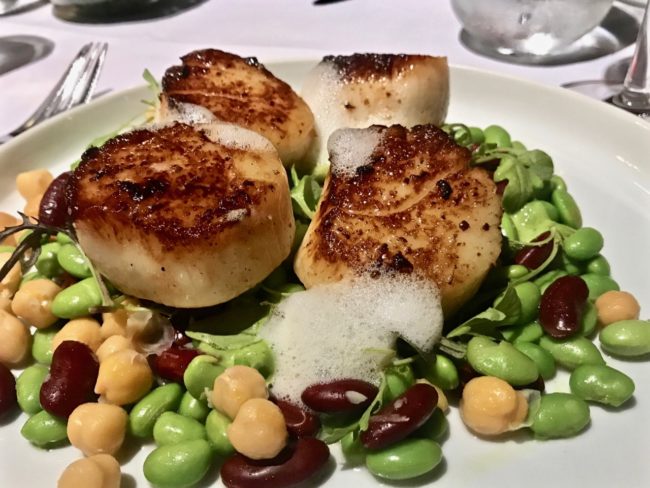 South Lake Avenue in Pasadena has become a sort of restaurant mecca in recent years with newer restaurants such as Nick’s South Lake Avenue, Magnolia House, Paul Martin’s American Grill, Del Frisco’s and Mendocino Farms joining old stalwarts like Celestino Ristorante and Smitty’s Grill.  I like them all, but I believe my new favorite is a restaurant that recently celebrated its one-year anniversary, The Arbour.

Why it took Tracy and me nearly a year to dine here, I have no idea.  However, I’m sure glad we did, because our first meal was so wonderful that we made a return appearance not too long afterward.

The Arbour is owned by the former chef of Drago Centro in downtown Los Angeles, Ian Gresik, and his wife, Nancy.  It’s their first restaurant venture and (from their website) is “a farm to table fine dining restaurant focusing on local ingredients and exceptional service.”

In early December, our friends, Jeff and Cecilia, visited from Phoenix, and we decided this would be the perfect opportunity for our initial foray into The Arbour.  The first thing you notice when entering is the gorgeous utilization of space.  Housed in what was once a Limited Express, the space is anything but limited.  Wood and glass abound, complete with a beamed ceiling and open kitchen in the back.  Someone on Yelp called the look “industrial chic,” which is a pretty spot-on observation. 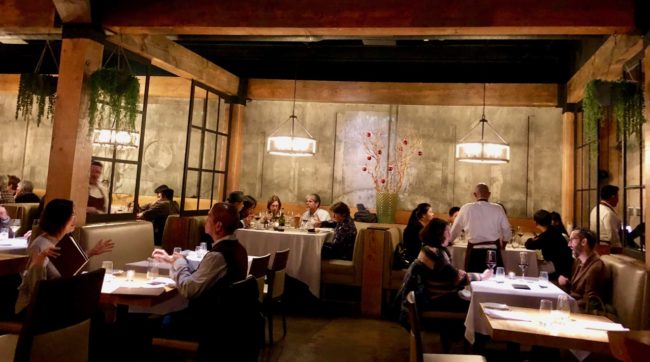 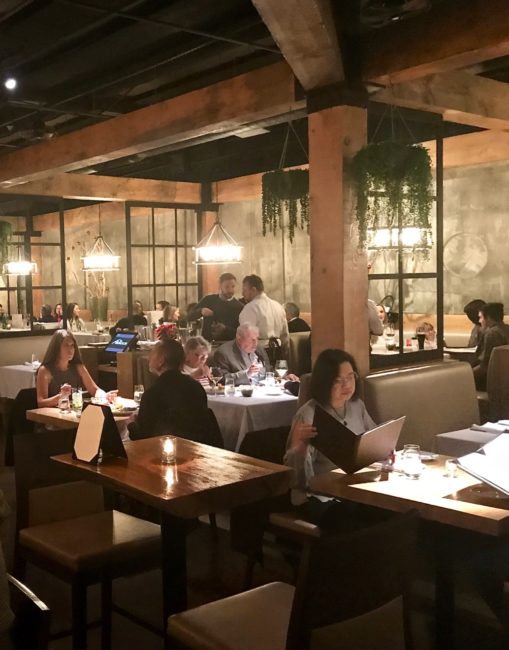 Tracy and I were early as usual and wandered over to the expansive bar area.  We chatted up our bartender while waiting.   It turns out Stephanie was named Pasadena Weekly’s Bartender of the Year for two consecutive years at another local eatery.   I ordered my own concoction, the Tomtini (recipe and story here), and she made it much better than I do (hence, bartender of the year). 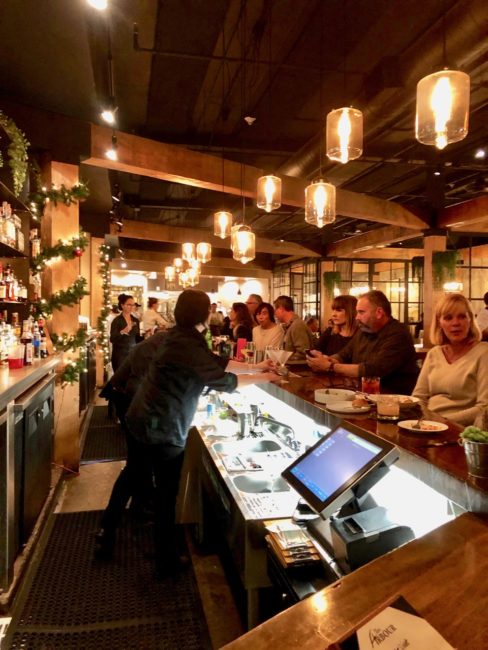 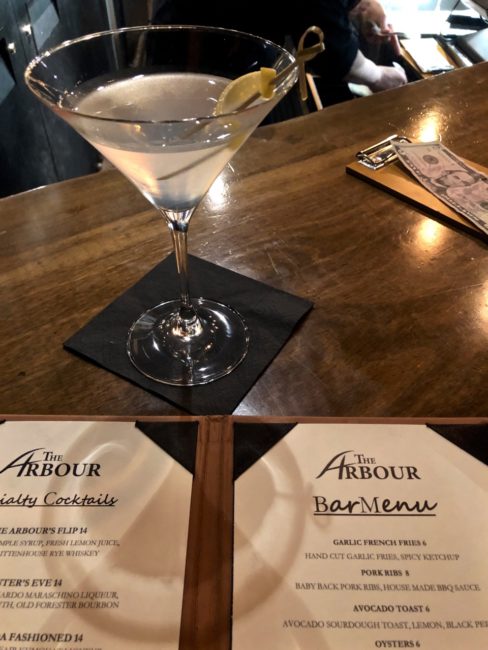 When Jeff and Cecilia arrived, we were seated toward the back, which gave us a partial view of the kitchen, which I always like, and it was a little bit quieter than up front where a large party had been seated.  Our waiter was fun, professional and gave us various tips on his favorite dishes.  Just about everything on the menu looked appealing, and we were all starving.

Since Jeff had not yet enjoyed a cocktail, I felt obliged to join him (what are friends for?) for one of the restaurant’s signature drinks, The Arbour’s Flip; egg white, simple syrup, fresh lemon juice, bitters and Rittenhouse rye whiskey ($14). 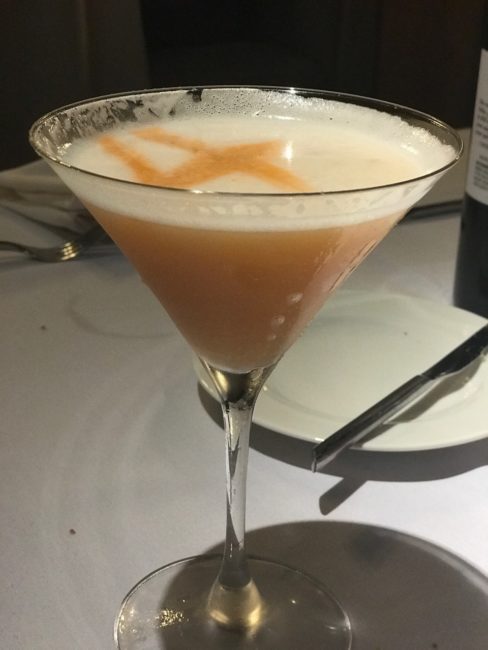 Toasted Bread Rolls were placed on the table, and try as might, I could not resist; they were worth every darned calorie complete with a delicious herb butter.  As a matter of fact, all the dishes here that include bread and rolls are outstanding. 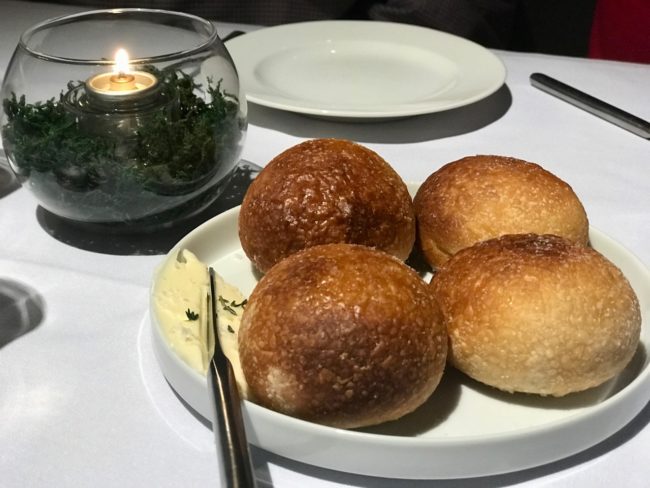 There were a number of interesting choices for hot or cold appetizers on the menu, but one was calling my name.  The Bison steak tartare; Fresno chili stamp, puffed bread, shallot ash ($15), knocked me out.  The puffed bread was light and tasty, the tartare out of this world and the shallot ash added a healthy kick.  It was a pure pleasure to eat. 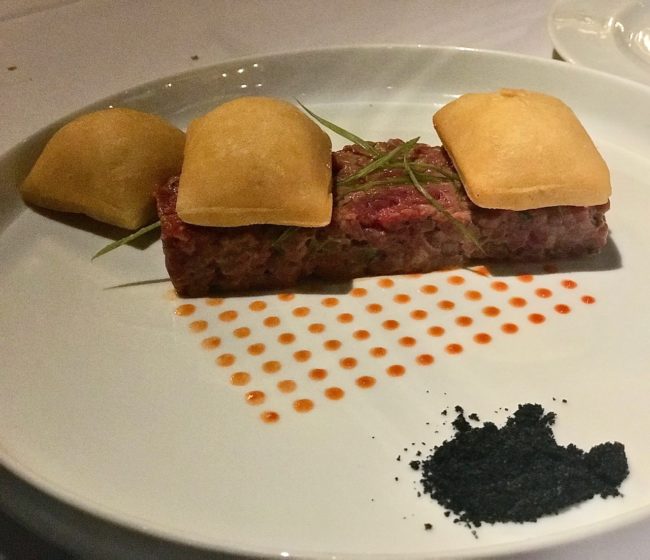 I followed that up with a delectable Mustard Rubbed Rack of Lamb; pearl couscous, Romanesco, watercress, tomato Romesco sauce ($36).  Wow, what a meal! 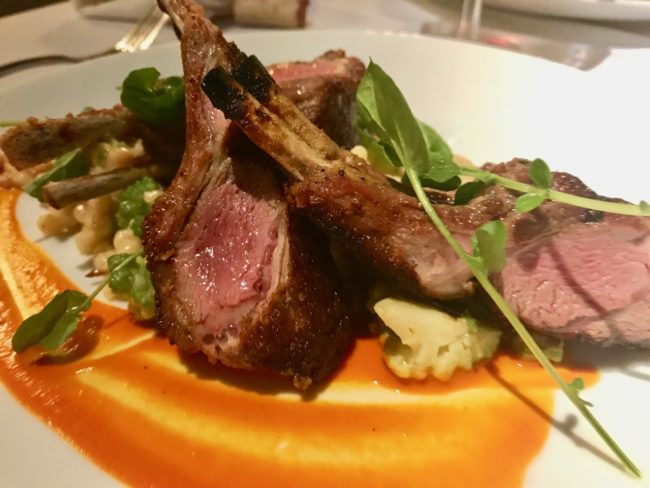 My compatriots were in for a treat, too.  Jeff started with the Spicy beef chili; beef fat candle, love, toasted ciabatta ($14).  And, yes that candle is edible (I think the melting adds flavor to the chili), however, it’s best if you wait for the flame to die out.  I asked Jeff how it compared to other chili he’s eaten, and he said they don’t hold a candle to this one.  Now you can see why we’ve been friends for nearly 50 years, 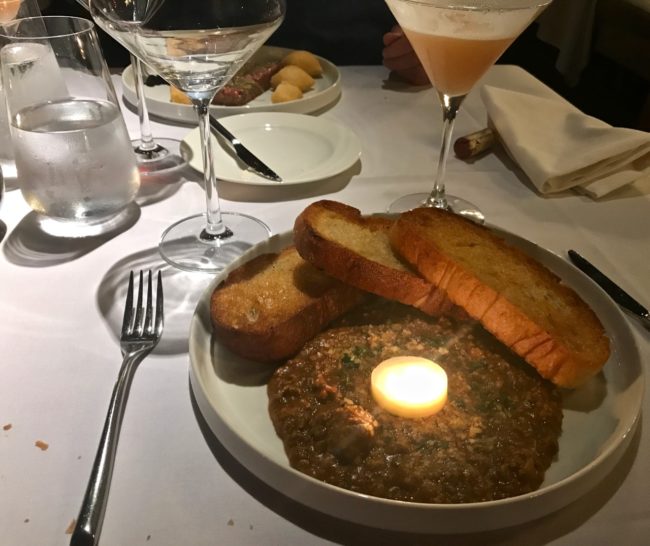 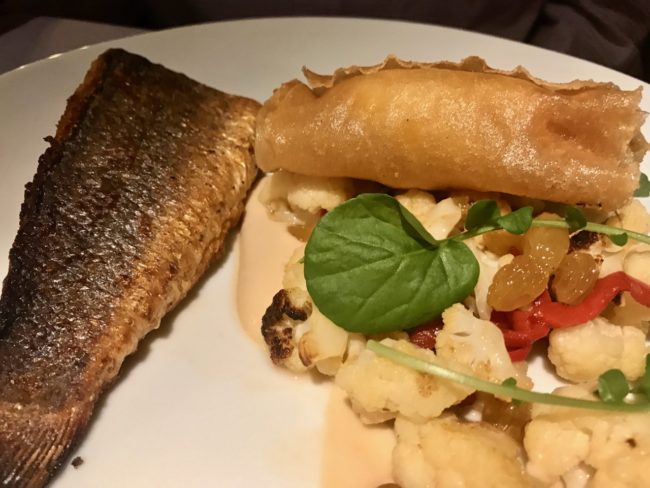 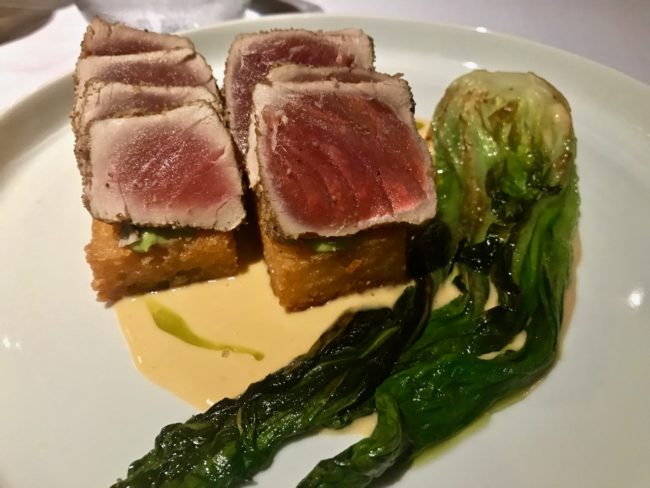 Finally, Tracy, not surprisingly since she is a beet fanatic (she’s got the beet), started with a Golden Beet Salad; baby kale, sunflower seeds, dry ricotta cheese, sherry vinaigrette ($12) and ended with Diver Scallops; mixed farmers market beans, salsa verde aioli, lemon foam ($30).  Amongst the four of us, there was not one missed dish. 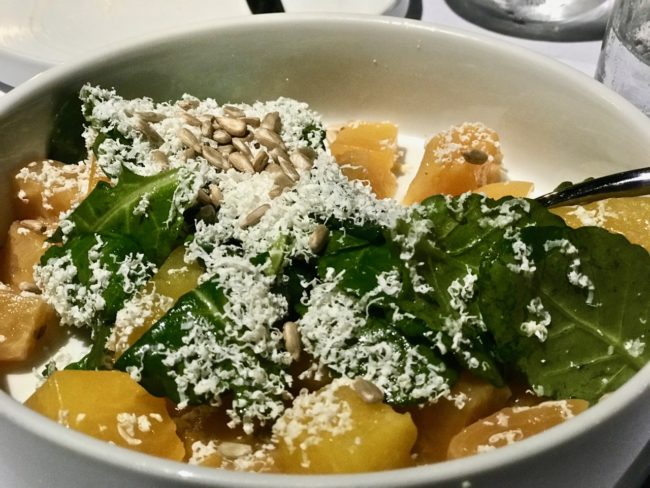 As we finished, we saw the smoked duck breast for two arrive at the table next to us being delivered under a glass dome filled with smoke; duck legs, crispy black rice, Swiss chard, roasted turnip and greens ($68).  It smelled so good that it almost drove me Daffy. 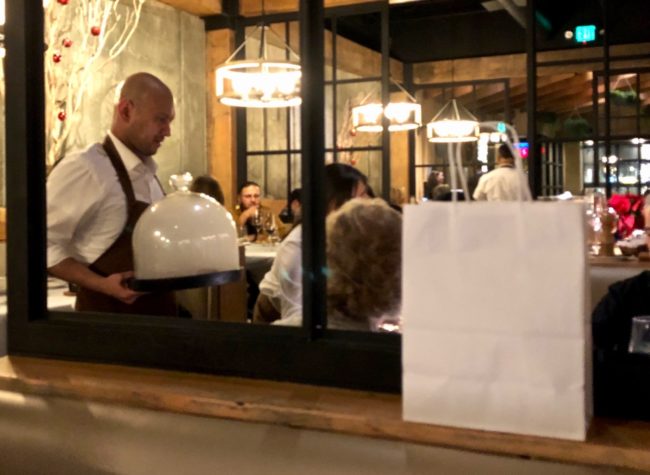 Tracy and I wanted to return to the Arbour after enjoying such a fantastic meal, so at the beginning of February, we joined friends Xochitl, Joanne, Helen and Gema to try some more of The Arbour’s delicious cuisine.

To start, our party shared the Bison steak tartare, since I had loved it so much on our first trip, and the dish was just as good this time.  Please leave it on the menu forever. 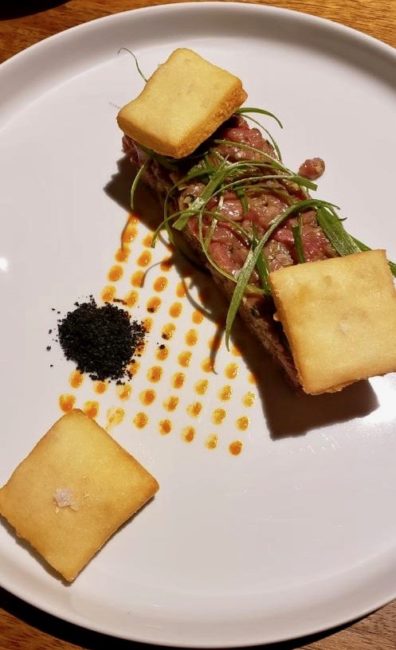 I loved both my dishes again.  The Potato and Leek Soup with Chives; velvety smooth and fantastic ($12) as was my Butternut Squash Risotto; an extra-large serving ($22).  It’s large enough to be shared, but somehow I was able to eat it all. 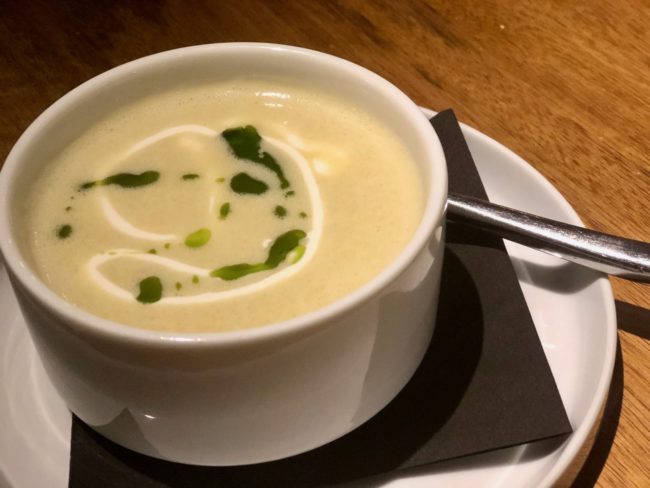 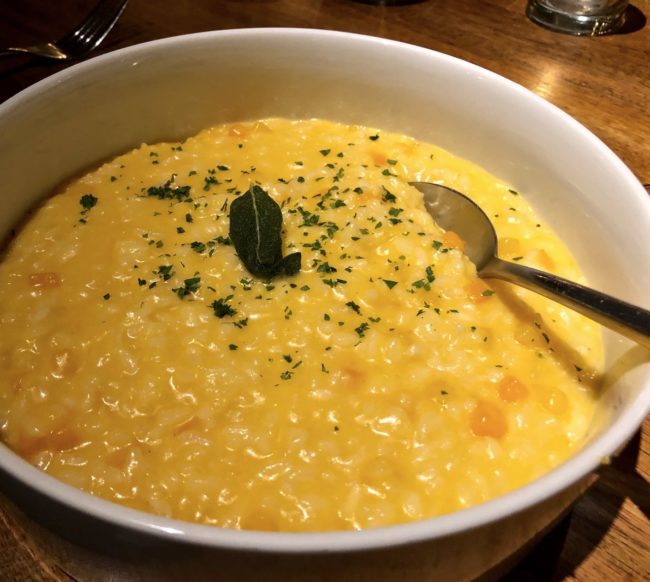 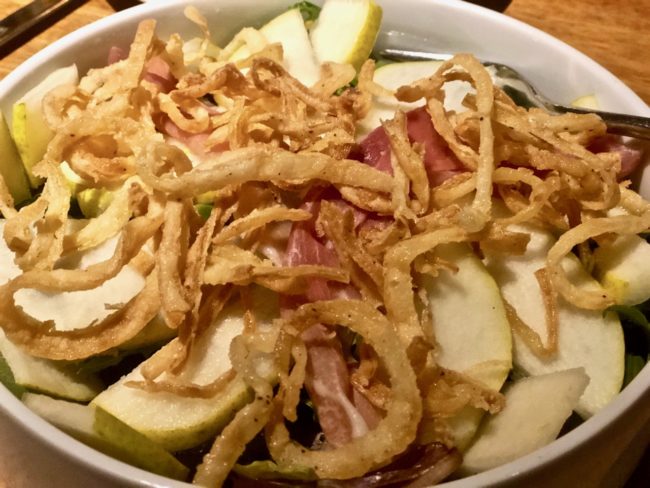 Helen had the Golden Beet Salad and sea bass while Gema opted for the Hummus;  roasted garlic, Piquillo pepper, lemon pan fried pitas ($11) and the Mustard Rubbed Rack of Lamb.  She let me try the hummus and it was marvelous.

Both times we dined here we shared their signature dessert, which I think is called “Baked California.”  Take that Alaska!!!   I admit … I am, and always have been, a flambé guy.  If there’s a dish you can set on fire at my table, I’ll try it!   So, right there at our table, the flambéed dish consisting of frozen almond cream and meringue with some dark rum thrown in for good measure, was devoured within seconds of the flame extinguishing. 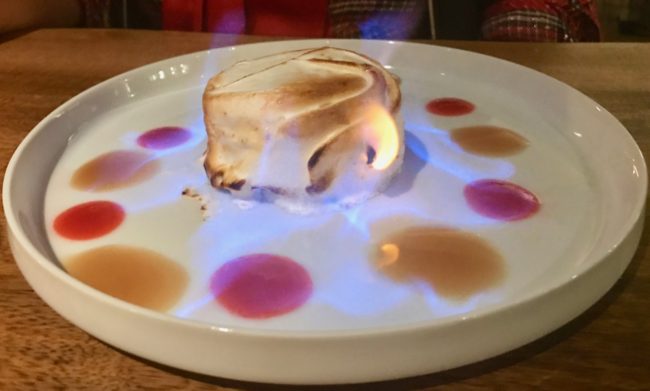 In true journalistic fashion (or perhaps because I was hungry), I took one for the team and returned with my friend, Tim, to check out The Arbour’s Happy Hour menu (served daily 4-6 p.m.). 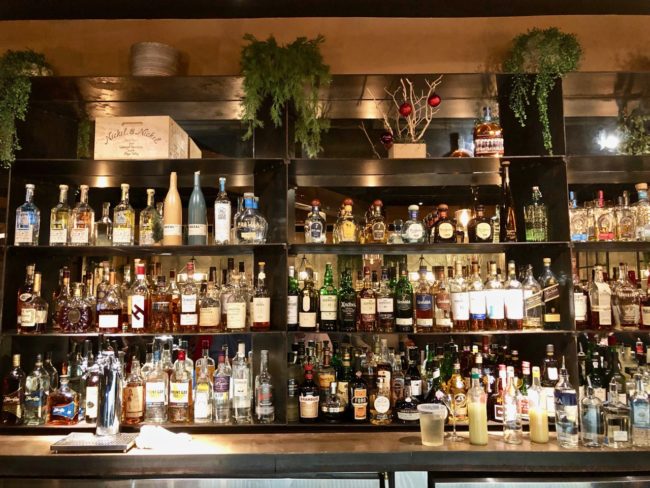 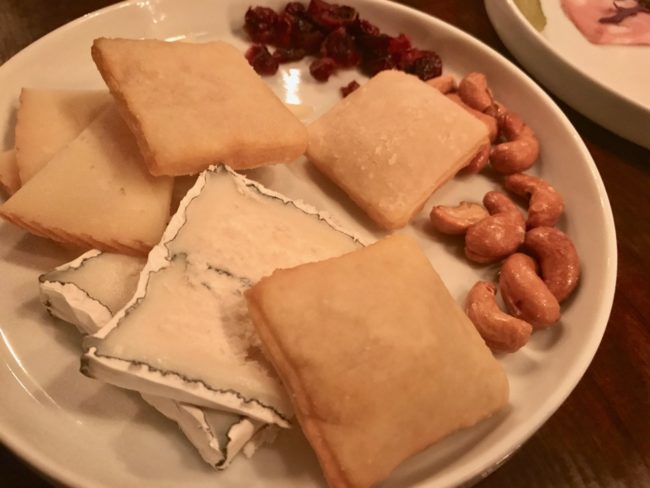 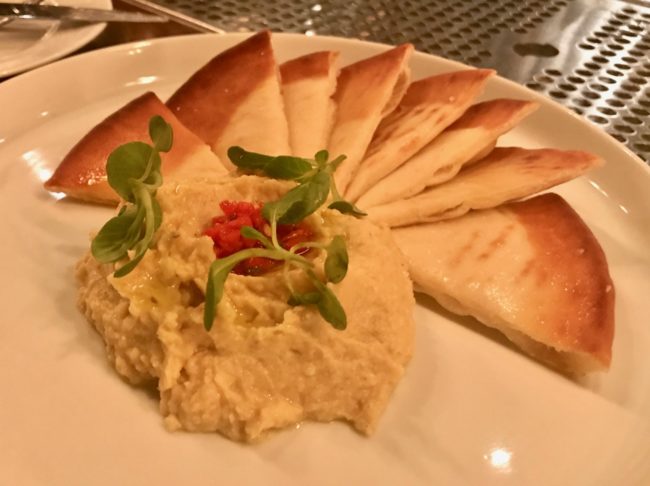 Although a hip guy (in my own mind), I went the Old Fashioned route by ordering one (or two … hey, that’s why they invented Uber); Old Forester Bourbon, brown sugar cube, angostura bitters ($8), while Tim tried one and a Black Cow Martini; Black Cow Vodka made from 100% cow’s milk, and cheese stuffed olives ($9).  The Uber ride (with tip) back to my house was about the same. 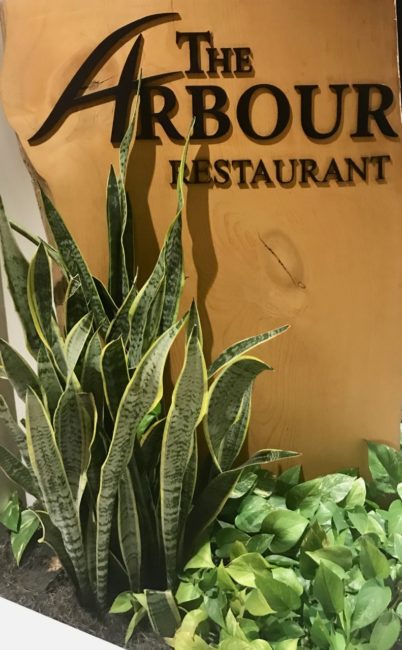 Special occasions at The Arbour look enticing as well.  The restaurant offered two options for New Year’s Eve (three-course meal for $75 or four-course meal for $95) and their Valentine’s menu looked so delectable that it is something we have marked for next year.

Everything about The Arbour makes me want to return.  It has a menu that changes often, and so far, with a number of dishes literally under our expanding belts, everything has been exceptional.  The staff could not be friendlier or more professional, and the ambiance of The Arbour makes this an overwhelmingly great addition to the Pasadena restaurant scene.  See you soon!