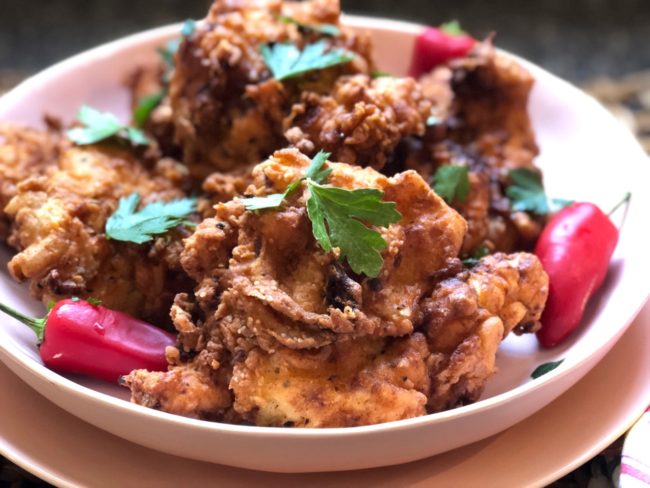 What I can recall of my Nana’s chicken was that she fried it in an electric frying pan, in Wesson or Crisco, and she used paper bags to shake it up.  Man, that chicken was perfection and even better the next day … but, nothing to be done about that lost recipe so let’s get to the Shake Shack recipe. 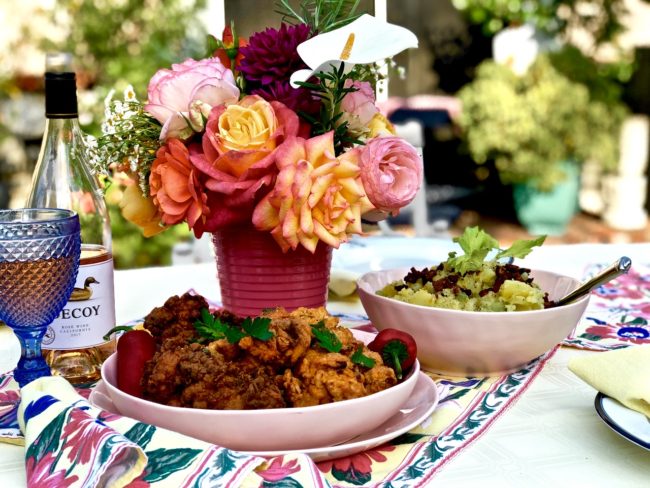 From the Food Network article:  “The secret to the most-tender chicken with the crispiest exterior is the combination of the marinade and the double-dip crust process. The marinade has a buttermilk base to tenderize the chicken and shallot, garlic and a hint of jalapeño for flavor.

‘The thing about the marinade,’ says Ina, ‘is you want to be sure that you marinade it for long enough so the flavor gets into the chicken … about 8 hours, but not too long … more than 24 hours, it tends to break down a little bit.’

The chicken is coated twice in the flour mixture that includes baking powder to make the crust light and crisp, and smoked paprika, cayenne pepper and celery salt for big flavor and heat.”

The Shake Shack now only serves fried chicken sandwiches, which is why this recipe uses breasts that are pounded down and then cut into smaller pieces.  That is ok with me, as we prefer white meat, and the smaller pieces fry quicker.

Me being me, and as we have never had it too spicy, I added extra shallots and sliced jalapeños to the marinade with the idea of frying them up at the end.  After consulting with my sous chef, Donna, we also added some additional paprika and cayenne to the flour mixture and it still wasn’t very spicy.  Next time I am doubling down on the paprika, cayenne and adding more garlic!  Hmmm, and if it’s just Tom and me, maybe a half bottle of Lottie’s Hot Pepper Sauce in with the buttermilk marinade (we buy the Traditional Yellow Barbados Recipe by the case).  Bam!

Speaking of doubling, depending on how many pieces of chicken you have, you may actually need more liquid than the recipe calls for so I have increased the amounts from the original recipe.  Tweaking, it’s what I do.

I marinated the chicken overnight and then put it on a wire rack over a cookie sheet to let it air dry in the refrigerator for two hours before frying to give an extra layer of protection to seal in the moisture.  If you are going to let it air dry for more than two hours, cover it with plastic wrap after two hours.

Dredging the chicken twice makes a super thick crunchy crust and amazingly it was not greasy at all.  I let it drain for a few minutes on paper towels (more absorbent than paper bags) after frying, but there was hardly any grease.  Between air drying and two layers of marinade and flour mixture, the chicken was super moist, even two days later. 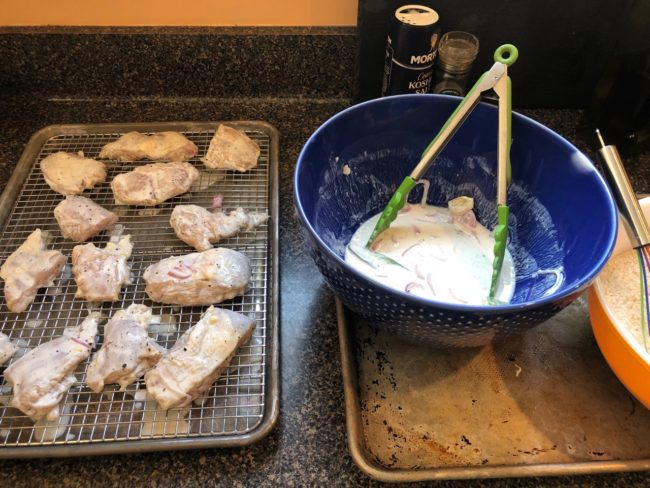 If you are not into that much crust, Donna thinks the recipe would work just as well with a single dredge.

The recipe calls for two, 48-ounce bottles of oil.  Definitely, don’t want to pour that much oil down the sink (actually, you never want to pour oil down the drain).  So what to do with all that oil?   Donna recommended letting it cool completely and then use a funnel or baster to transfer the oil back into the containers for disposal.  Or, you can save it and reuse if you follow a couple of simple steps set forth in the attached link from Serious Eats.

I served the chicken with Potato Salad with pancetta, celery, rosemary and lemon (recipe), along with a corn, arugula, and blackberry salad.  If you have someone in your life who doesn’t like mayonnaise, be sure to try this lemony potato salad … and don’t skimp on the pancetta!   Good stuff.

Was this the best ever?   Well, I’ve made this a few times, and it was very moist with a super crispy crust and was great the next day (or two).  We really liked it, so I would have to say, with a little tweaking, this is darn good chicken. 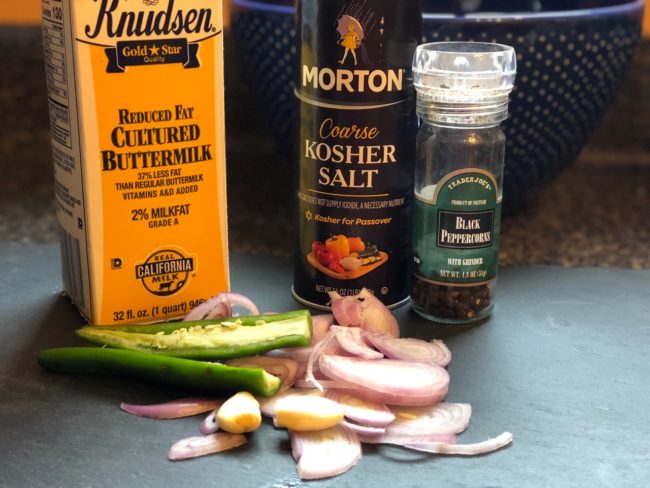 2 (or more) jalapeños, sliced (include some of the seeds for heat) 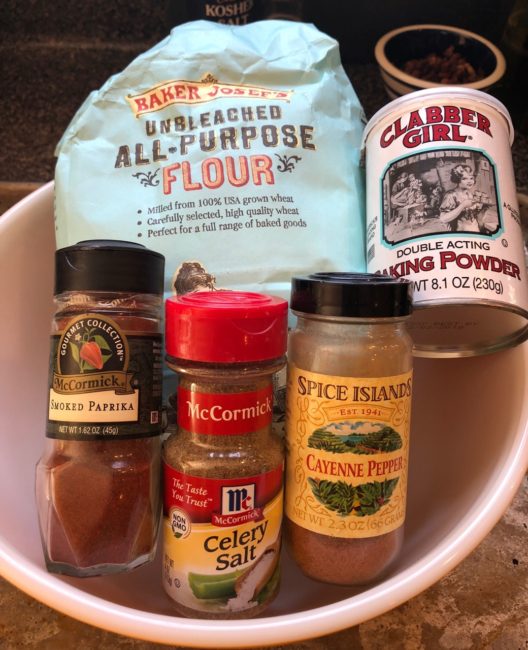 For the marinade (doubled from the original recipe), whisk the buttermilk, shallot, garlic, jalapeños, and 2 t. salt and 1 t. black pepper in a bowl large enough to marinate the chicken in. 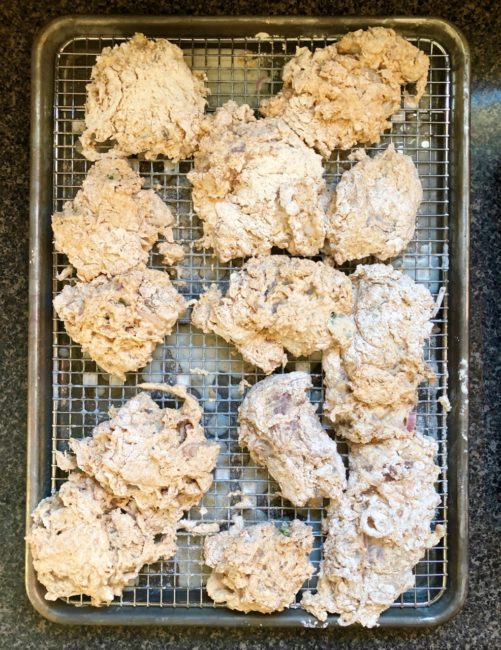 With a rolling pin or a meat mallet, pound the chicken breasts between two sheets of parchment paper until they are evenly ½ inch thick.  Slice each breast into pieces of approximately the same size.  (I actually ended up with 13 pieces of chicken, it will depend on the size of chicken breasts you are using on how many pieces you get.)

Add the chicken to the marinade, cover with plastic wrap and refrigerate at least 8 hours but not more than 24.

About two hours before cooking, remove the chicken from the marinade and place on a wire rack over a cookie sheet to let it air dry in the refrigerator for two hours before frying.  Save your marinade!

In a medium bowl, whisk together the remaining dry ingredients (flour, baking powder, paprika, cayenne pepper, celery salt, 1 T. salt and 1 ½ t. fresh ground black pepper) and set aside.   At this point, you may want to taste a tiny bit of the flour mixture to see if it needs any more spices and adjust accordingly.

Preheat the oven to 250°F and place a rimmed sheet pan with a wire rack on it in the oven for keeping the chicken warm.

Pour the oil into a medium Dutch oven (at least 9” around and 4 ½” deep), fitted with a candy thermometer, until the oil is 2 inches deep.  No deeper as you don’t want the oil to spill out when you add the chicken.  Heat the oil over high heat until the temperature reaches 350 degrees. 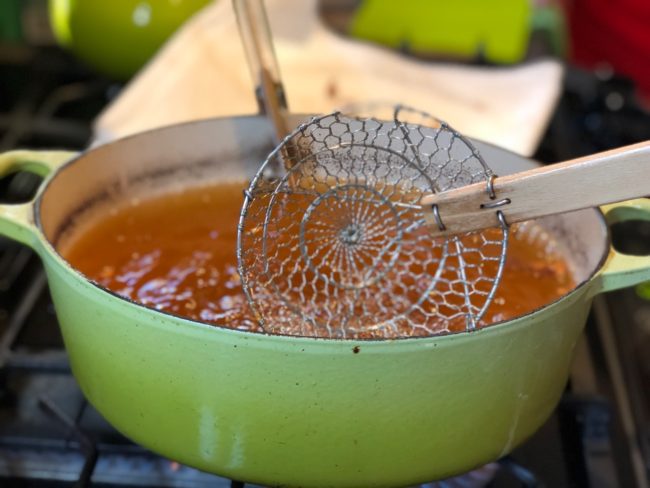 Meanwhile, dip the chicken back into the marinade, then dredge it well in the flour mixture, submerge in the marinade again, then dredge in the flour one last time, dusting off any excess. (Or use my Nana’s brown paper bag method for less mess.)  If there are any bald spots on your chicken pieces, use your fingers to press in a clump of the flour/marinade mixture which will have balled up in your bowl.  Transfer the chicken to a plate or sheet pan until ready to fry. 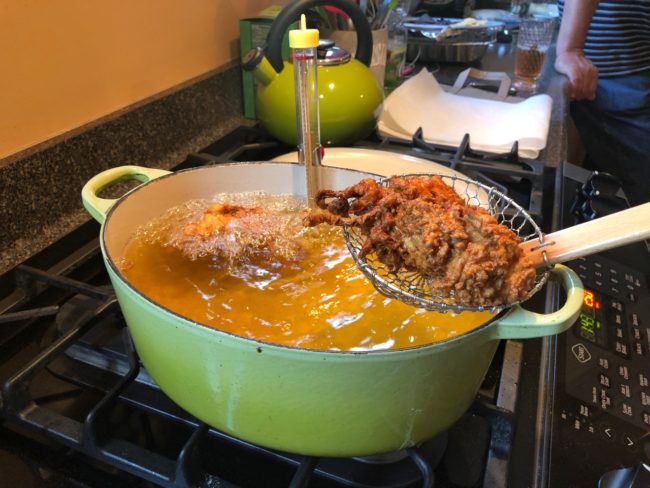 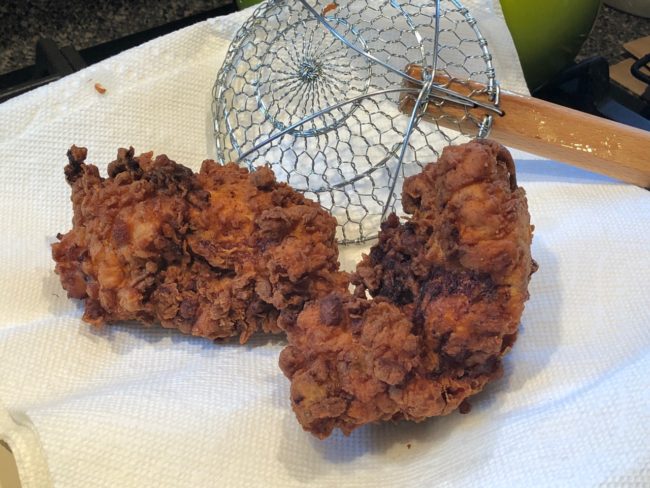 When the oil reaches 350 degrees, carefully lower three pieces of chicken into the oil with a slotted spoon.  Keep an eye on the heat of the oil and adjust to keep at 350 degrees.  Don’t crowd the chicken and turn the pieces for even browning.  Ina says to cook for 5 minutes exactly and that was about right.  The crust should be a nice golden brown (my first attempt was much darker than the other pieces).  If you are unsure if the chicken is completely cooked, pierce one piece with a fork in the thickest part.  The juices should run clear when the chicken is done.  With a slotted spoon or wire basket, transfer the chicken to paper towels to drain and then into the sheet pan in the oven to keep warm.  At this point, feel free to sprinkle the chicken with kosher salt or fleur de sel.  Repeat with the remaining pieces of chicken. 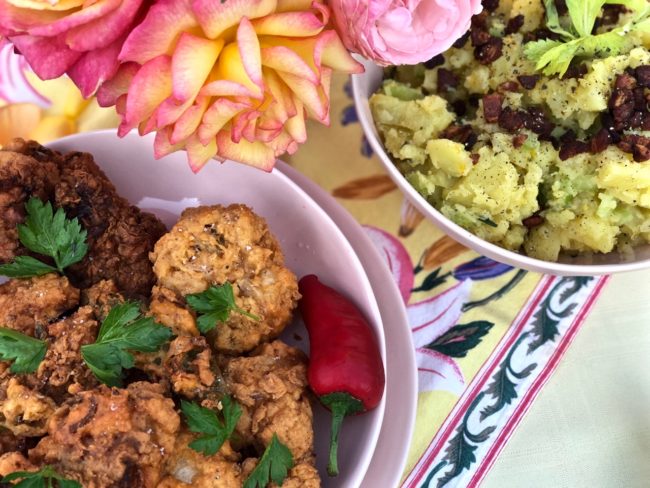 Optional garnish:  When you are finished, scoop the remaining shallots and jalapeños out of the marinade and lightly toss with the remaining flour and quickly fry for a garnish. You can also fry up those clumps of flour/marinade mixture if you like.  YUM.

Recipe courtesy of Ina Garten and adapted as noted above. 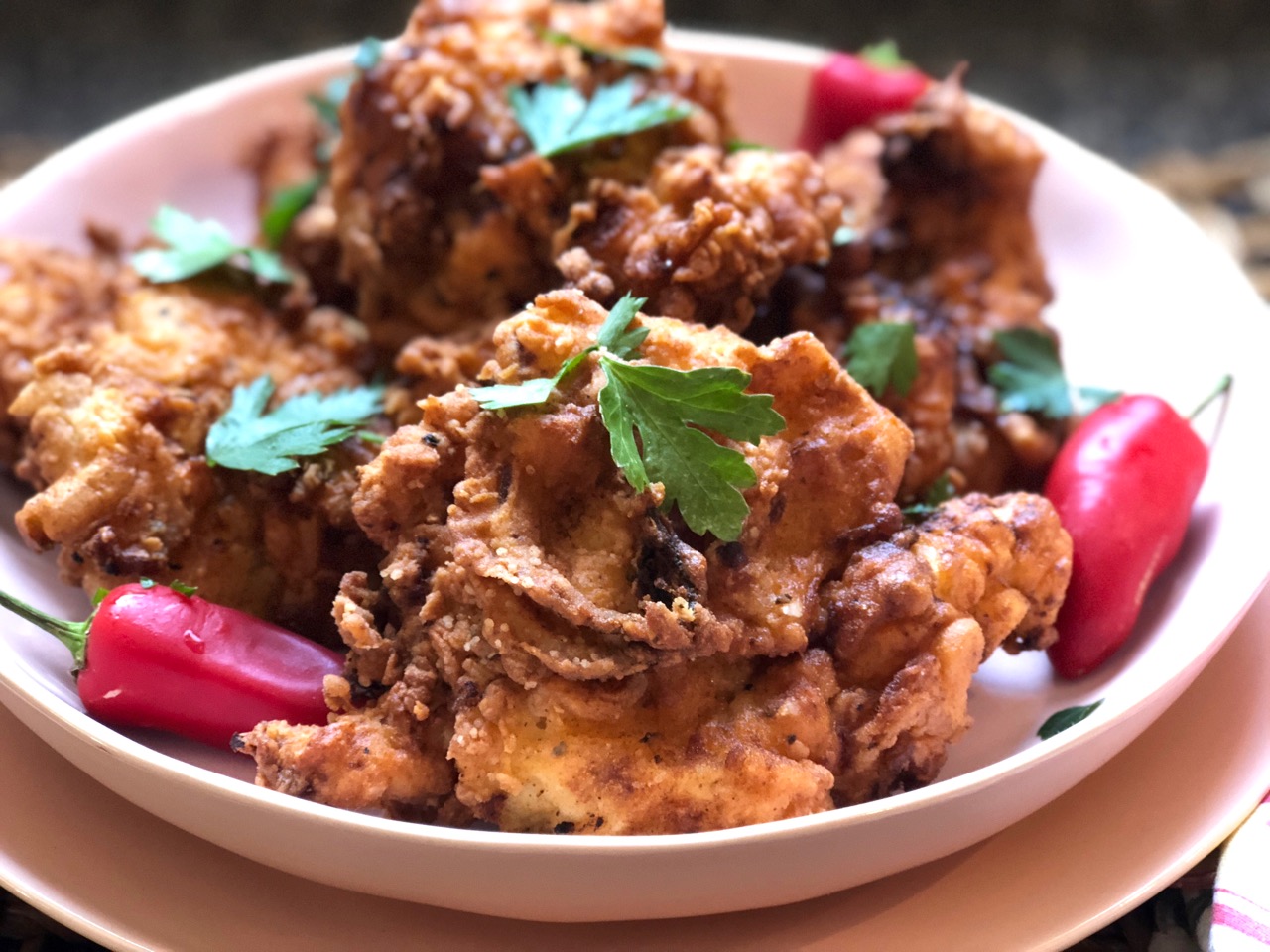