In The Nick’s Of Time 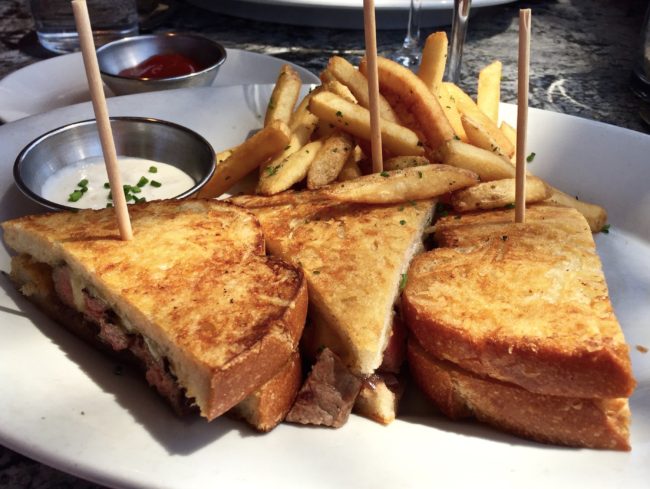 Well, you know what they say, “Two Nick’s is better than one!”   In the past couple of months we have visited Nick’s on Second in Long Beach for dinner and Nick’s Laguna Beach for lunch.   They both have a lot in common; the food was out of this world, the service was impeccable and they served a deviled egg that we still dream about to this day.

Our first Nick’s experience took us to Long Beach on a balmy Sunday evening.  Even with sunset dinner reservations at 6 p.m. (well, we are getting up there), the place was packed…as was Long Beach (why wasn’t this here when Tracy and I lived in LB?). 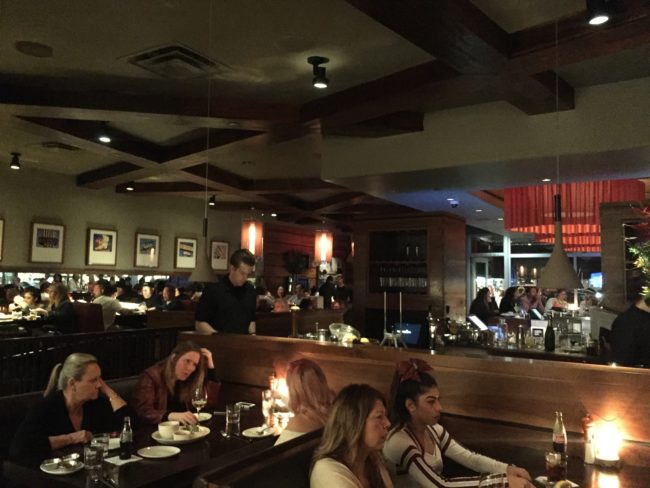 There is no valet parking, so we had to cruise around the neighborhood looking for street parking.  We lucked out, found a spot a block away and were seated at the big table right in front of the window looking into the kitchen.  Joining us for the evening were friends Richard, Liz, Rob, Susan and Melinda (I didn’t know we had that many friends).  Liz chose Nick’s for our group, and a good recommendation it was. 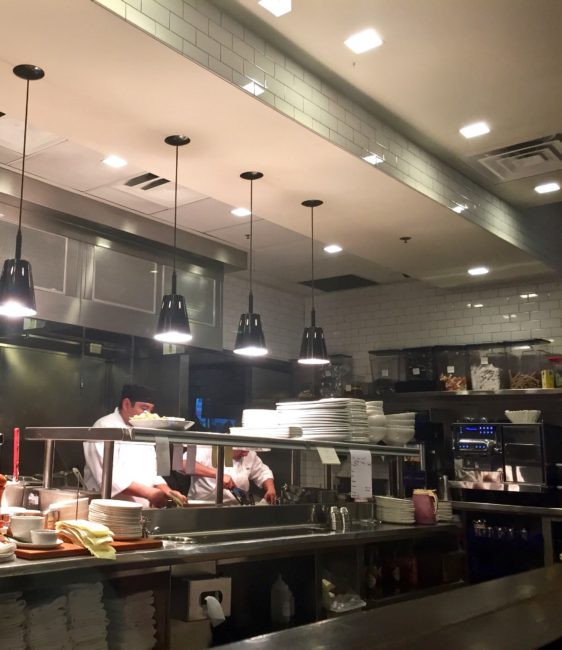 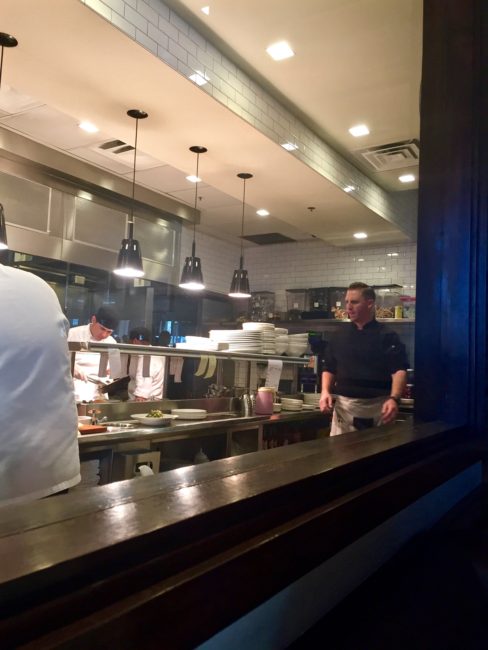 At this table, not only can you watch the kitchen at work, but it is quieter than the front of the restaurant.   There is outdoor seating on the sidewalk, and several people had their dogs tied to the railing while they were dining on the patio.  Please don’t tell Frankie and Remi. 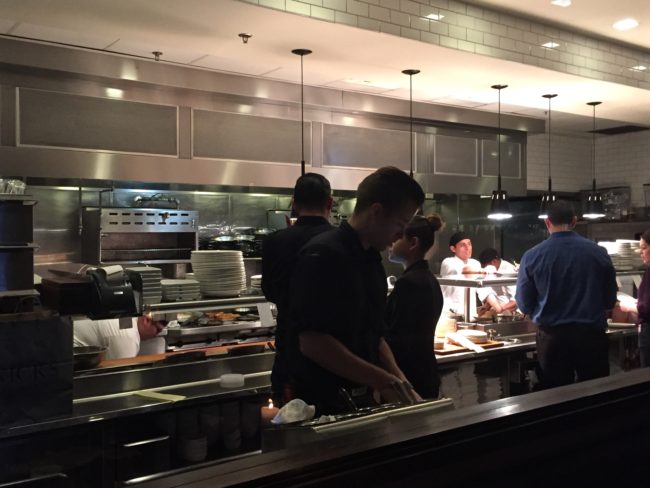 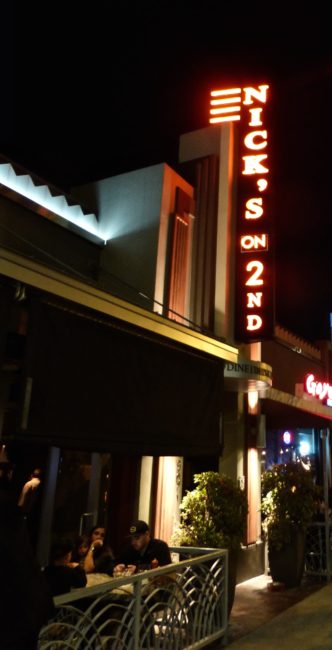 Our table started with the Bacon Deviled Eggs ($8) which are dusted with a Parmesan panko crust then flash fried, filled with deviled eggs and topped with crumbled bacon.  WOW!  Whoever thought of this delicious combination is a genius.  Truthfully, I could devour ten of these things in a sitting. Damn the cholesterol!  I started eating the egg, and Tracy grabbed me to take a photo before I inhaled the entire thing. 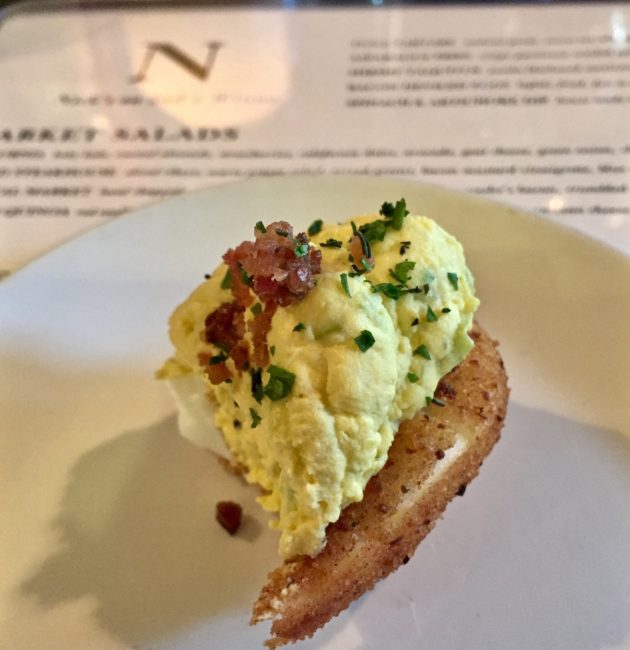 Our attentive and friendly server also recommended we try the Asparagus Fries, crispy Parmesan crusted spears with buttermilk ranch dressing ($11).  Asparagus ranks just above pickles on my list of least favorite foods, but these were delicious…so delicious they were gone before a photo could be taken (we were all very hungry).

For dinner, Susan ordered the Bistro Plate with a petite filet mignon served on garlic toast, Bistro salad and a cup of the soup of the day which, on this day, was chicken tortilla ($22).  When I saw it, I was craving that piece of perfectly cooked steak, but as you’ll see, I was quite happy with my choice.

Rob ordered the Maple Glazed Meatloaf with maple chipotle gravy, caramelized onions, Parmesan cheese and served with whipped mashed potatoes, carrots and green beans ($19).  He said it tasted as good as it looked, and it looked terrific. 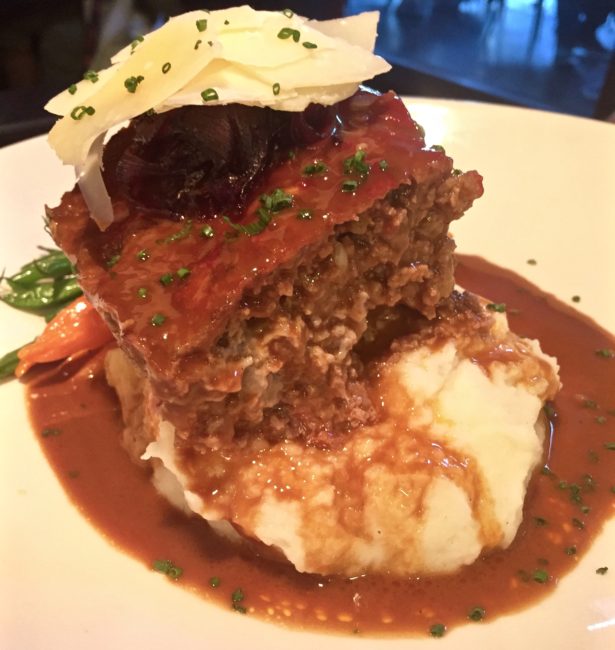 Rich went with the Buttermilk Fried Chicken, consisting of two large boneless pieces of chicken served with a mountain of whipped mashed potatoes and a buttermilk biscuit smothered in country gravy ($21).  And, as if that wasn’t enough carbs, the dish came with a roasted corn on the cob on the side.  Rich had plenty left over to take home. 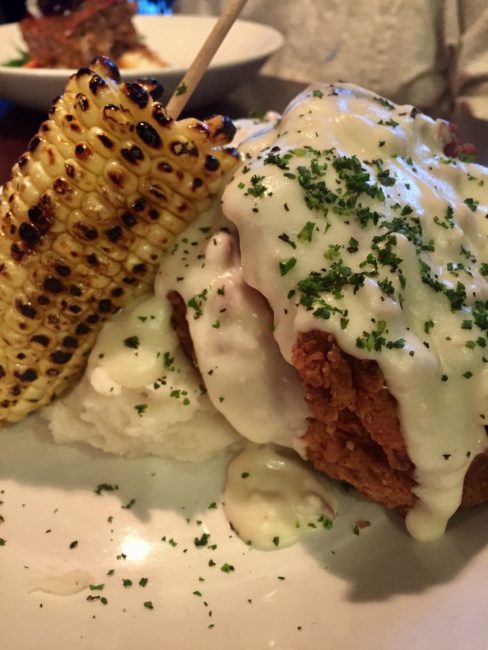 As you can see by now, you might want to skip the diet for an evening when you dine here.

Tracy and Melinda tried the slow roasted Prime Rib Dip sandwiches served on a brioche bun with your choice of French fries, market vegetables or the Petite Bistro salad ($19). 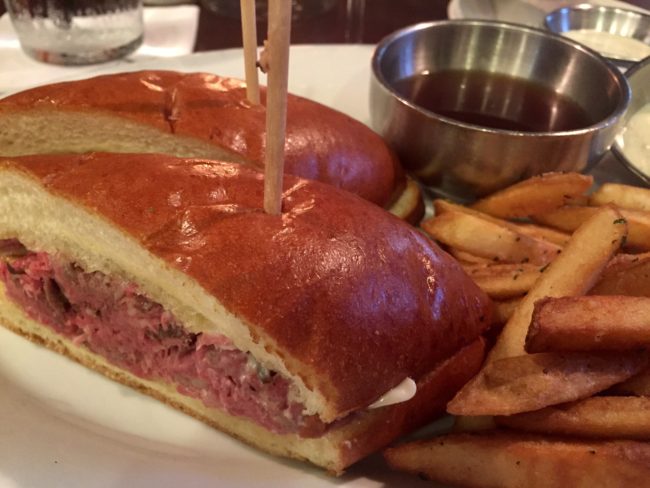 Liz enjoyed the Prime Top Sirloin with the Petite Bistro Salad; Lola Rosa and Little Gem lettuce, Napa cabbage, Tuscan kale, white cheddar, egg whites, red onions, roasted almonds and mustard bacon vinaigrette ($25).  She opted for the asparagus instead of the loaded baked potato (I wept in silence at that choice, since I was ready to steal part of her potato.)   As it turned out, I got my potatoes and more. 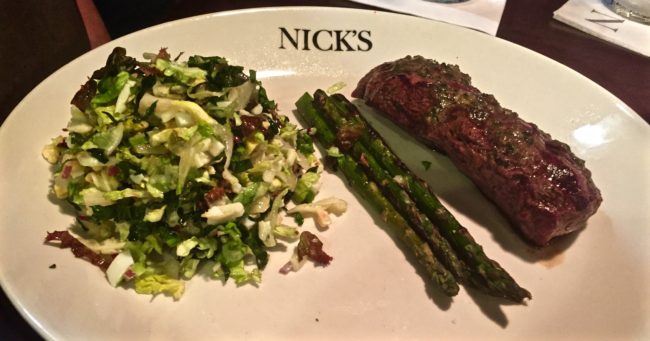 I was lucky enough to score the big “Wow” (besides those delectable eggs).  Highly recommended by our server was the Grilled Bone-In Duroc Pork Chop with blackberry reduction and thyme served with whipped mashed potatoes and baby roasted carrots ($25). As Dick Enberg would say, “Oh my!!!!” 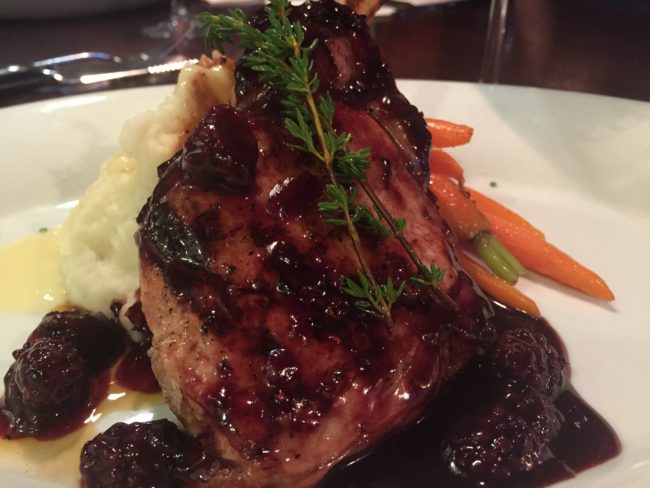 Oh wait, we had one more “Wow” to come. We could not leave without sharing Nick’s signature Warm Butter Cake (don’t worry, I had already loosened my belt) with crystallized sugar crust, vanilla ice cream and berry compote.  This cake was warm, crunchy on the outside and its “melt in your mouth deliciousness” earned praise for those enough who scooped in to eat this dessert within about a minute. 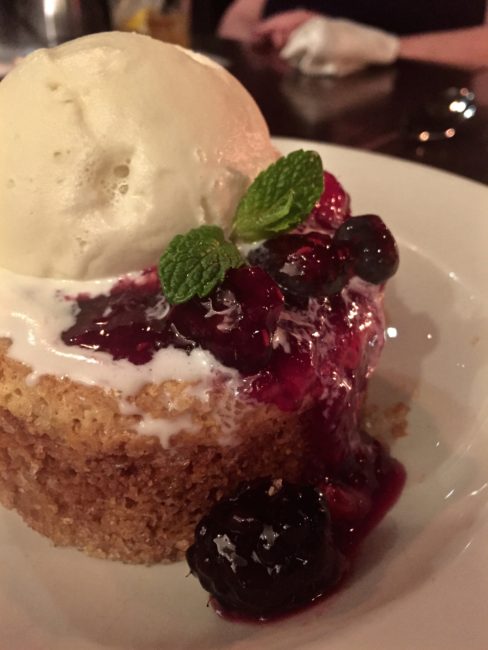 Our server also recommended Brian’s Whiskey Cake (yellow cake with espresso, frothed milk, pecans and an intense whiskey glaze), but sadly no one (including gluttonous me) had room for an extra dessert.   We brought our own wine. Nick’s has a very generous corkage policy of the first bottle free and then $15 per bottle, which is unheard of at restaurants these days, especially one that has such great dishes.

Along with our check, came warm damp towels to wash our hands.  It was another nice touch at an excellent restaurant.

Nick’s on 2nd was so good that when our friends from Cincinnati said they’d be visiting Laguna Beach the following month, we secured reservations for Nick’s in that beach town as a lunch destination meeting spot.

On a beautiful spring Saturday afternoon, we traveled to Laguna Beach (bring your patience when driving in Laguna Beach…it gets a tad congested) for lunch with our Cincy friends, Tom and Margie.  Similar to the Long Beach restaurant, the place was buzzing, and there is a reason it is so popular. 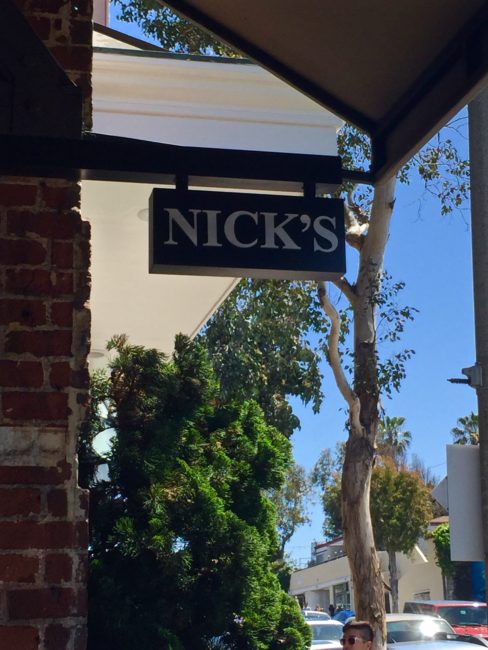 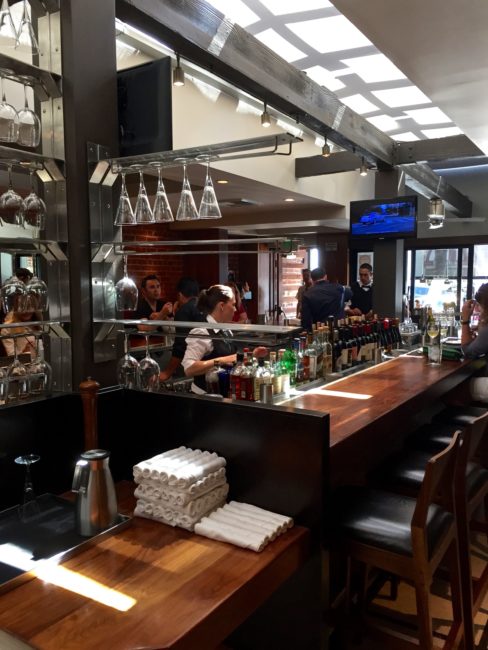 We were fortunate to spy a sign for public parking just a few doors down from Nick’s ($10 valet for entire day) so my head kept from exploding.

Meeting our friends who were already relaxing with a glass of wine (these smart out-of-towners utilized the trolley that runs through town), we were able to secure the last table on the patio overlooking the busy street scene on PCH just across from the beach.   Per my wife, “While Tom (yes, “my Tom”) ogled the bikini clad passersby, we once again started with the Bacon Deviled Eggs.” 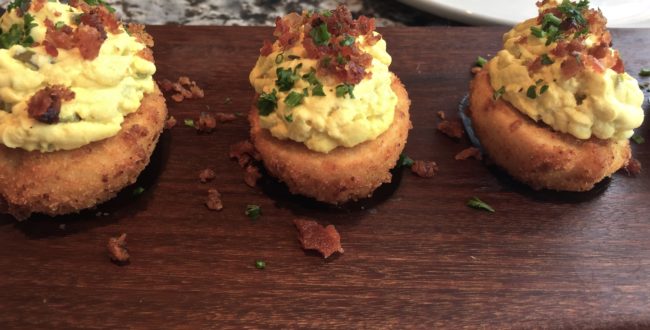 If anything, they might even have been better than the ones in Long Beach.  Of course, I was preoccupied with my “people watching.” 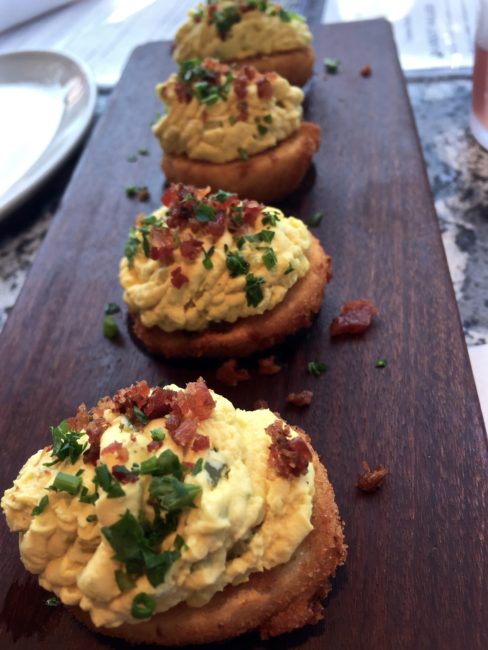 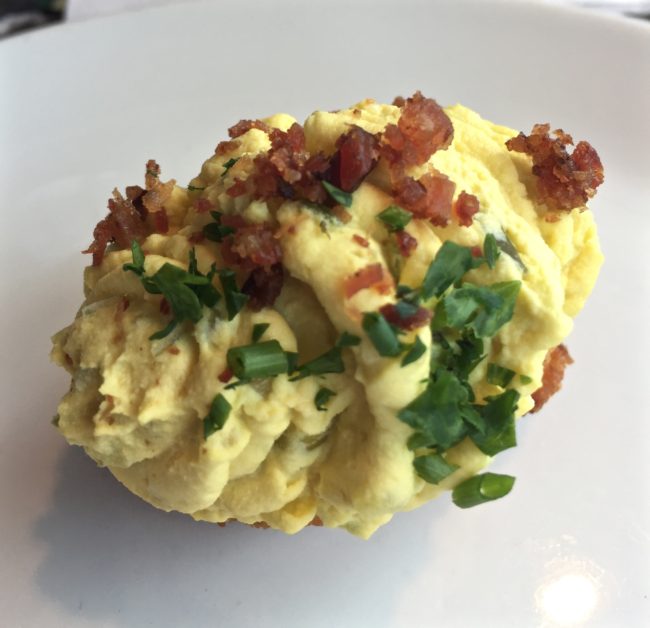 Tracy ordered the Grilled Steakhouse Salad; sliced ribeye, warm potato salad, mixed greens, bacon mustard vinaigrette, blue cheese wedge, tomatoes and croutons ($23).  Tracy was expecting a “salad,” but this dish was a pretty good sized steak with two side salads. She said the warm potato salad was divine, but that her husband was not. I don’t know what she meant. 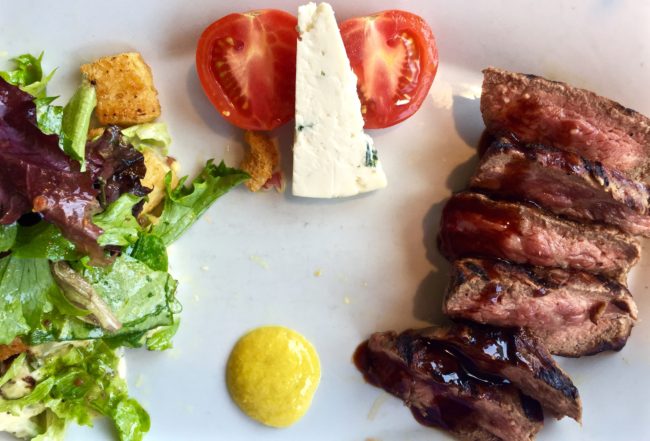 I ordered the Original Ribeye Melt; sliced ribeye, Swiss cheese, red wine onions, mustard bacon sauce on grilled Parmesan sourdough ($19).  It was basically a big grilled cheese sandwich stuffed with ribeye, cheese and onions!  I have had many a steak sandwich in my days, but nothing even comes to close to this one. Yowser!  The only thing missing was the defibrillator. 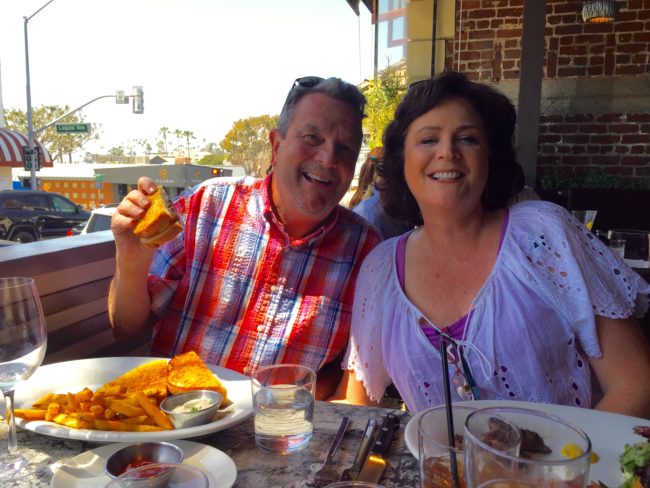 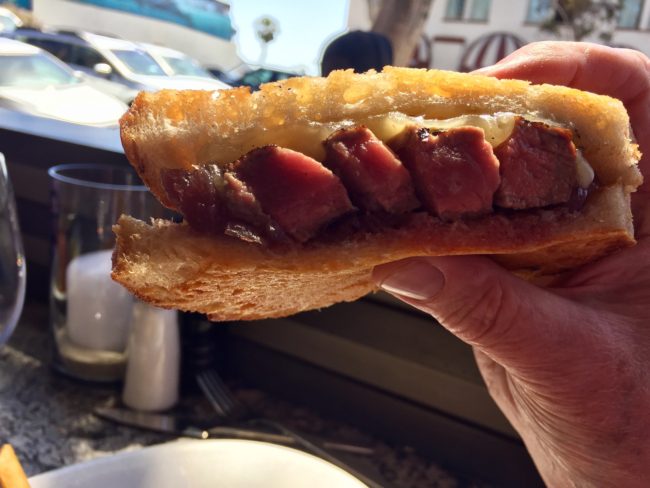 I ate all three halves, which somehow comes out to more than a whole, but having only mastered Math 3 in college, I decided to give up on my addition quandary and eat.

Tom and Margie opted for the Blackened Fish Sandwich; crunchy cabbage, arugula, tomato, firestick onions, and house made tartar sauce piled high on a brioche bun ($18).  The sandwich ingredient on this afternoon was made just for the halibut. 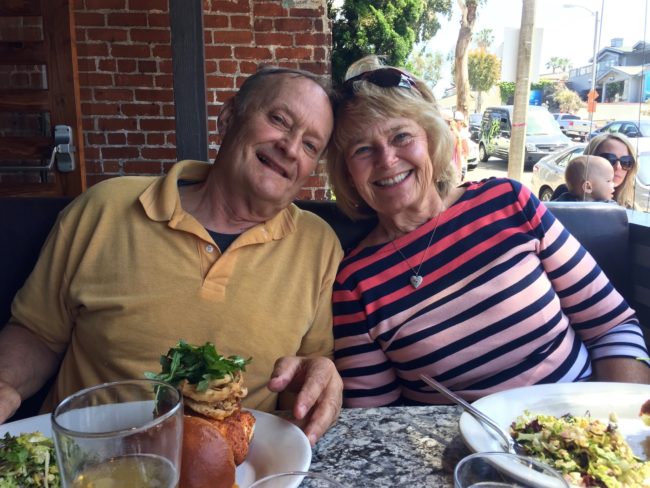 After our very enjoyable and leisurely lunch (not even room for Butter Cake after today’s meal), the hostess thanked us profusely for dining with them and recommended we try their new location in San Clemente, South of Nick’s, featuring Mexican cuisine.  The manager (or at least I think it was the manager) even came outside and took a picture of the four of us in front of the restaurant. 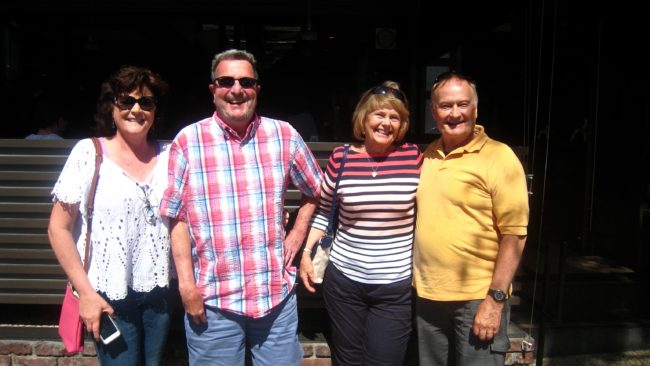 After lunch, we all wobbled down to the beach. This is why we live in Southern California, baby! 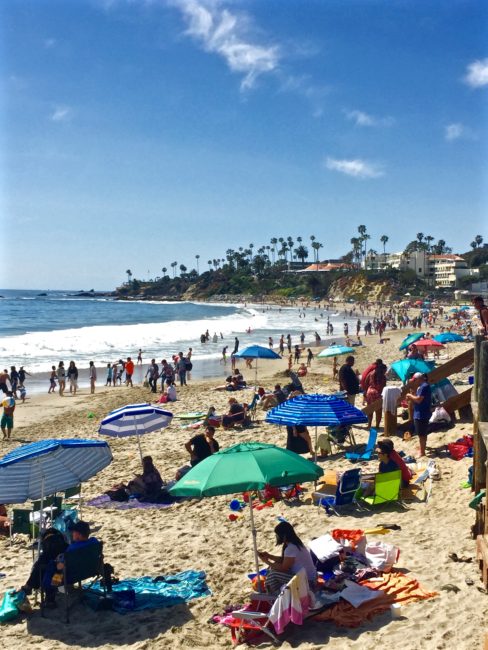 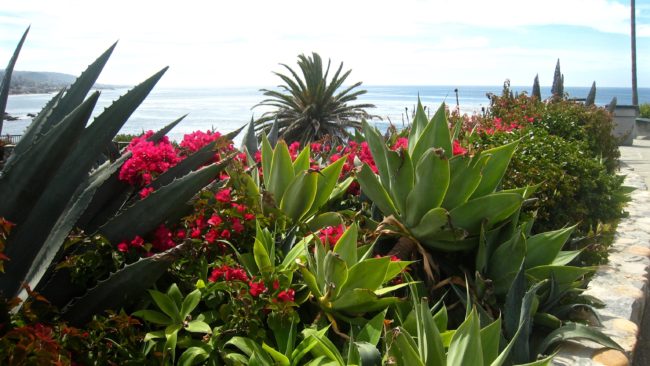 Nick’s restaurants began in 2008 and its website states: “Nick’s is dedicated to perfecting the dining experience through continuous innovation, offering the highest quality food and beverage, and executing impeccable standards of hospitality. The deeply instilled Nick’s culture is personified by its Ladies and Gentlemen – professionals who share a single focus and are inspired and committed to offering great service and creating positive memorable experiences.”

For a lot of restaurants, those could just be words.  For Nick’s, those words are taken to heart by their staff, because all the men and women we encountered, from our hosts to our servers to the guys busing dishes were phenomenal….friendly, personable and professional. 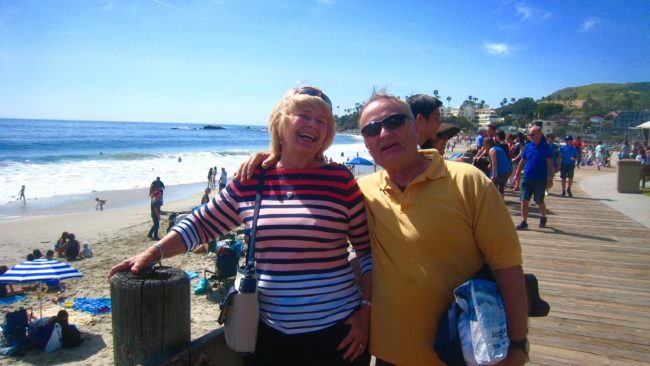 Tracy and I are now Nick’s devotees. There wasn’t a bad dish at either location, and when we return from Scotland, one of the first things we’re going to do is head down to South of Nick’s, their Mexican restaurant and bar in San Clemente.  If it’s anything like the first two, Nick’s is going to be in the running for the MaiTaiTom Restaurant(s) Of The Year.  When you eat at Nick’s, you leave with a smile on your face.