Travels With Mai Tai Tom 2016 Vacation Restaurant Of The Year

There were lots of great choices this year for the first ever Travels With Mai Tai Tom Vacation Restaurant Of The Year, but L’Ange 20 in Paris brought home the award with two impeccable dinners on back-to-back evenings. 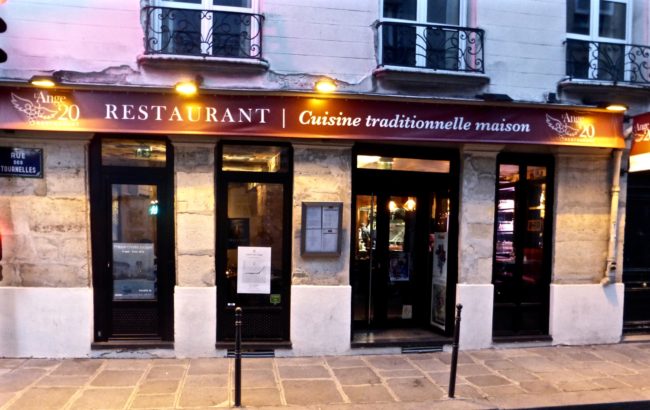 L’Ange 20 barely edged out L’Arôme in Bonnieux and Le Bacchus in Beaune, both of which were also excellent (as were many restaurants we visited on this trip, but these three were the crème de la crème).

Tracy and I visited L’Ange 20 in 2014 and had intended to also dine there our last evening of that trip, but we had to cancel a day early thanks to an Air France strike causing us to take an earlier flight. 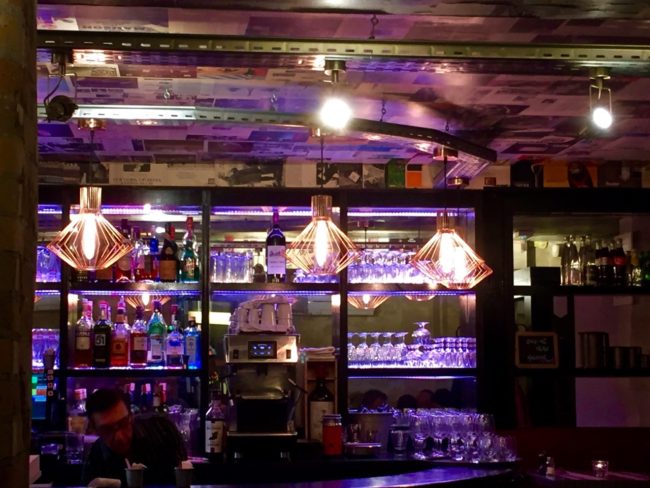 The restaurant has since relocated to a cool spot near the Place des Vosges.  There are 36 seats and a small bar area (with a gorgeous bar) in the new location, which is charming inside giving you a fantastic Parisian experience (below two interior photos are courtesy of L’Ange 20 as is the cover, thankfully because Tracy’s iPhone suddenly wouldn’t let her take any more photos).  There are also colorful pages from magazines that adorn the ceiling.  This is “my idea” of the quintessential Parisian bistro. 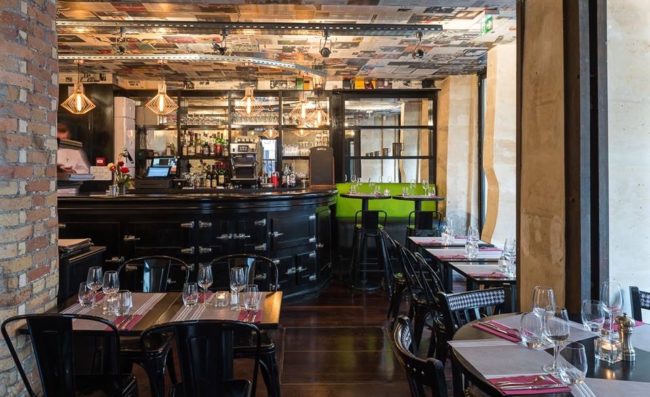 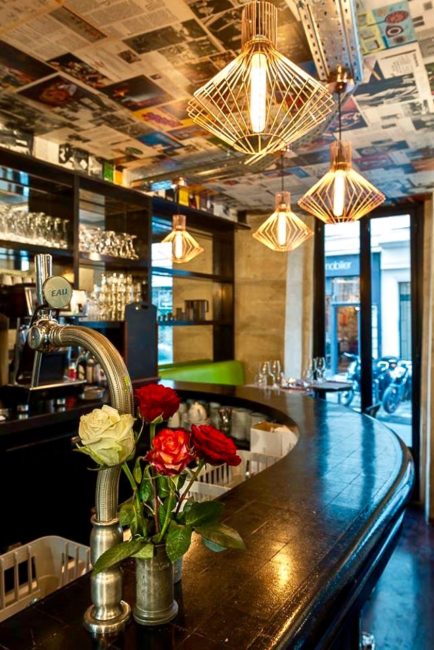 The chef and staff remain the same as two years ago, and our phenomenal (and funny) waiter, Christopher, has been with the chef since 2012; the assistant chef since 2011.

On our first evening at L’Ange 20 on our recent trip, we sat next to a fun couple from Philadelphia who eat here every time they are in Paris.  Christopher was hilarious, and I went with his recommendations even though they were a tad (well, maybe more than a tad) outside my comfort zone….

My entire meal…Meurette (quail egg poached in red wine on a bed of bacon and mushrooms)…yes, that was outside my comfort zone, and delectable…pork cheeks plus a scrumptious caramelized apple (below) on shortbread with vanilla ice cream…all garnered the coveted “Wow!” 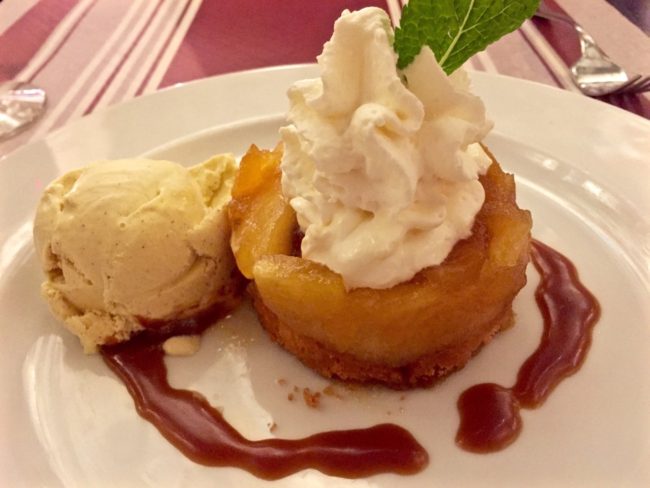 Not to be outdone, Tracy had the Tempura Prawns with Guacamole (“Wow”), which she had had on our last visit and remembered fondly.  Tracy said the guacamole here was better than mine, which is still up for discussion (but I have to admit it was terrific guacamole).  This was followed by the Guinea Fowl stuffed with Leeks on a bed of Potato Puree.  Yes, yet another “Wow!”

With a home run on every dish, we immediately asked (pleaded) for dinner reservations for the following evening, which was to be our last night in Paris on this trip.  Fortuitously for us, the menu changed the next evening, so we were able to try more items.

Again, going outside my comfort zone, Christopher suggested the salad de gesiers de volailles confits et magret de canard fume, which Christopher said was a very traditional French dish of chicken gizzards soaked in confit and then pan fried on a bed of greens with sliced smoked duck breast.  The gizzards tasted like pancetta…only better…and I love pancettta.  Tracy’s phone takes much better photos than my camera (of course, it could also be the photographer). 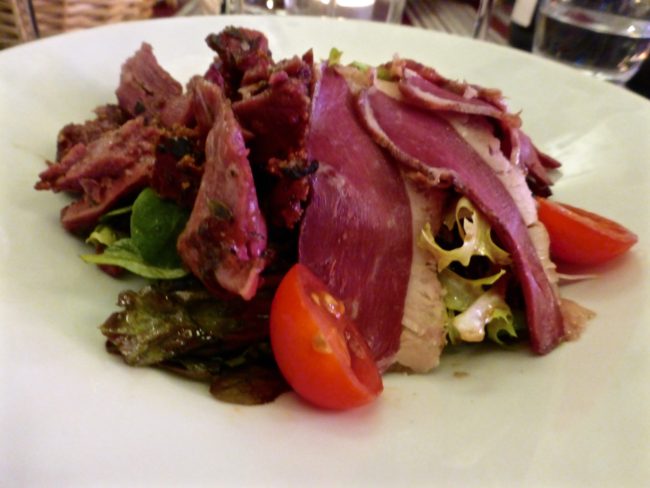 For my main course, I had the braised beef medallion with sage ricotta gnocchi.

Every dish I consumed on these two nights was a “Wow!”  I don’t think that has ever happened before.

Tracy started with Duck Two Ways (that’s legal in Paris, right?), seared and thinly sliced; braised and wrapped in phyllo with a side of pureed fall vegetables. Here is L’Ange 20’s photo of a similar dish… Duo of duck: duck breast in a crust of nuts and frayed in pastilla, celery puree, sauce duck foie gras. 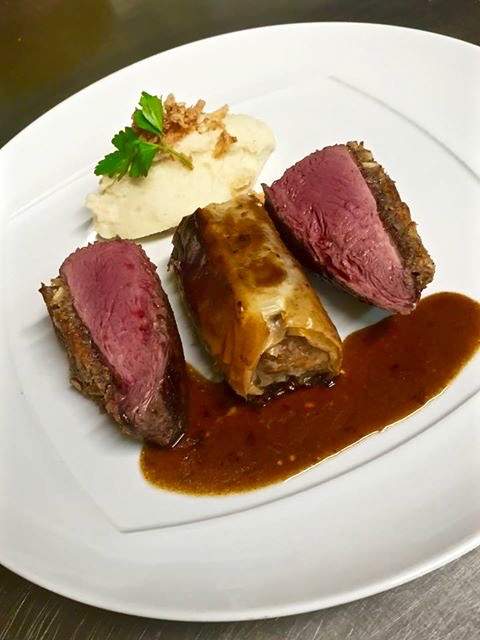 Then she opted for La cassolette de champignones et escargot en feuillete (mushroom and snail fricassee in puff pastry). Yes, both “Wows!”
Unfortunately we were too full to partake of dessert on this evening, which I regretted.  L’Ange 20 was also nice enough to email me a couple of more food photos to me due to the fact that AT&T decided Tracy’s iPhone was full when we dined there…even though her phone showed it wasn’t. 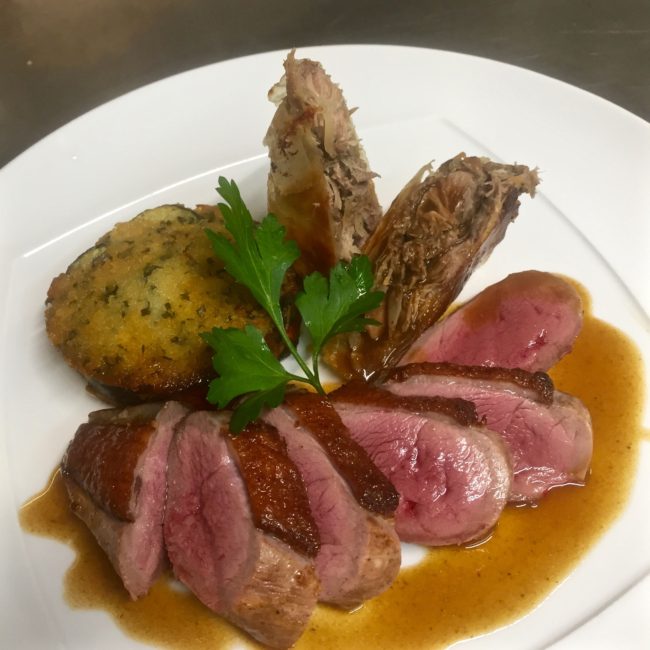 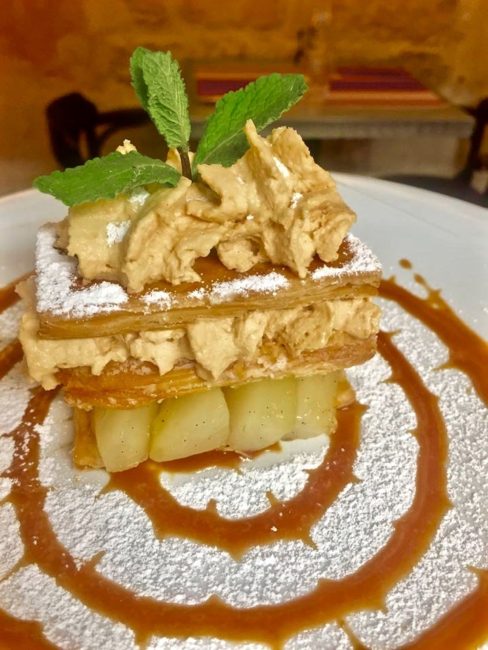 No matter what’s on the menu when you visit, rest assured Chef (and owner) Thierry and company will create something delicious. 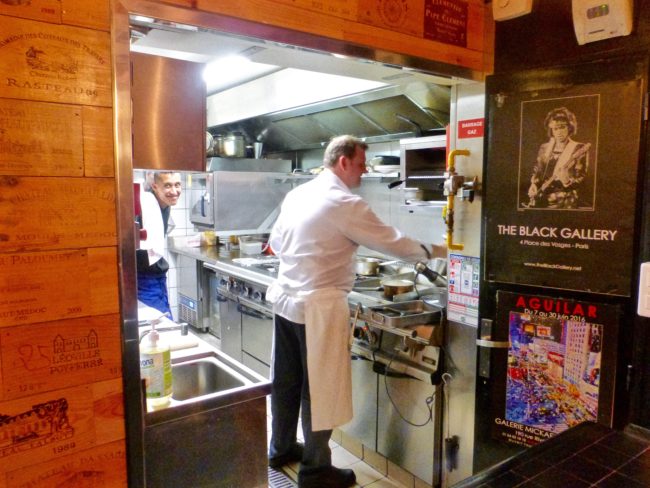 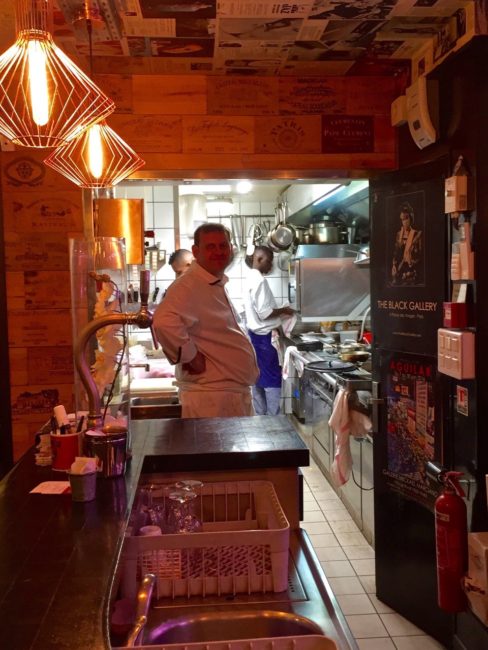 We departed there on our final night convinced that L’Ange 20 would be our inaugural Travels With Mai Tai Tom’s Vacation Restaurant of the Year, and it’s an honor well-deserved. Oh, and listen to Christopher’s recommendations! 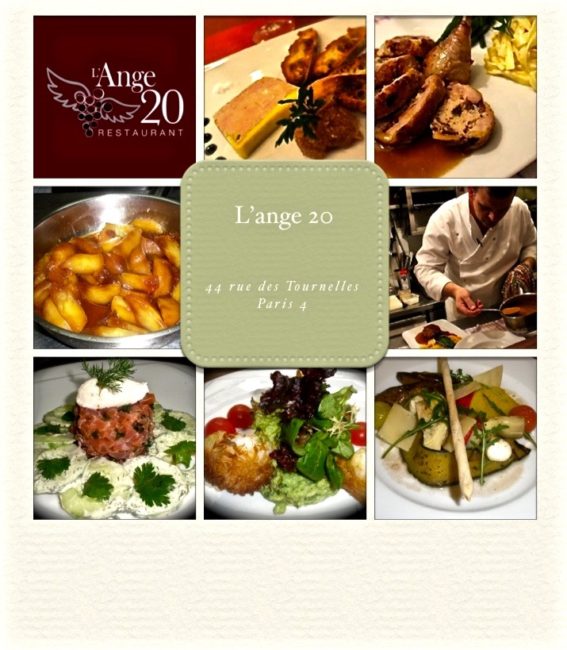