A Shot In The Arm 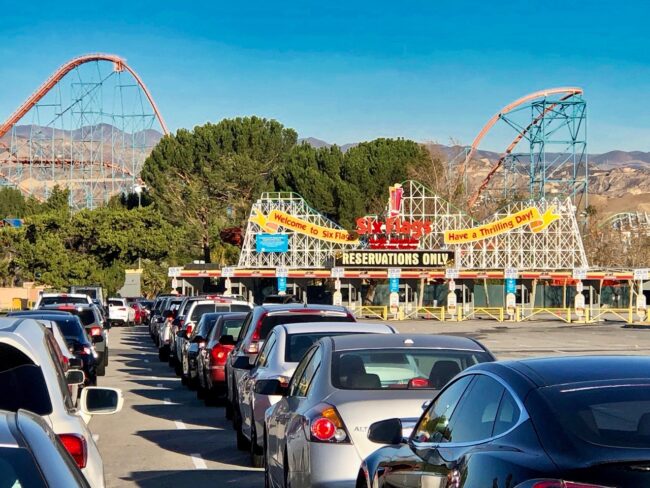 Being a gentleman (bit of a stretch) of a certain age, the big question for me the past month or so has been, “When will I get my Covid vaccination?” Luckily for me, I received my first shot this week (January 21), thanks to my super sleuth wife Tracy, who, on her lunch break, happened to turn on the KTLA (Channel 5 in Los Angeles) afternoon news on Tuesday.

The first thing we heard was an announcement by the L.A. County Health Department that in two days Los Angeles County would start vaccinating people 65 and older. It was one of the first times that getting old paid off for me. It even beat all those senior discounts I get at sites when traveling in Europe.

When the website for vaccinations was announced on the news, I immediately jumped on the computer (not literally), went to the website and got an appointment for early on Thursday. I chose the Magic Mountain site (foreshadowing alert). Since the entire vaccination process has been quite a rollercoaster ride, Magic Mountain seemed like the appropriate place to go. Hopefully, the shot wouldn’t make me “loopy.”

On Thursday morning, accompanied by Tracy in case I passed out in the car after the shot, we drove to Magic Mountain in Valencia. Not knowing what protocol they were utilizing, we arrived at 8:15 for a 9:48 appointment (and people think I get to the airport early).  There was already a long stream of cars idling (appointments started at 9 a.m.) 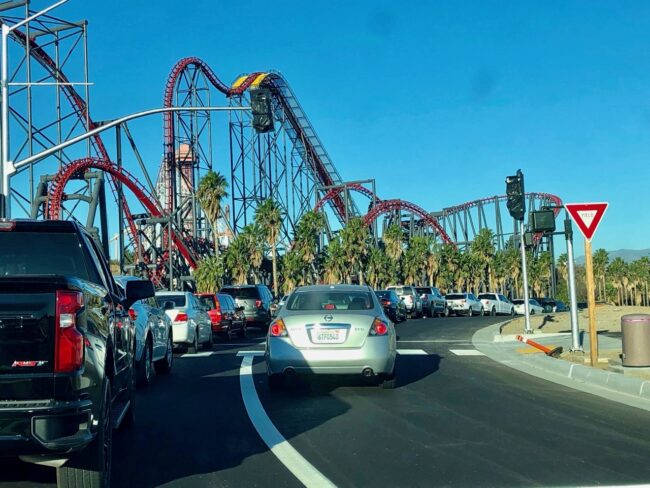 Once the gates opened … 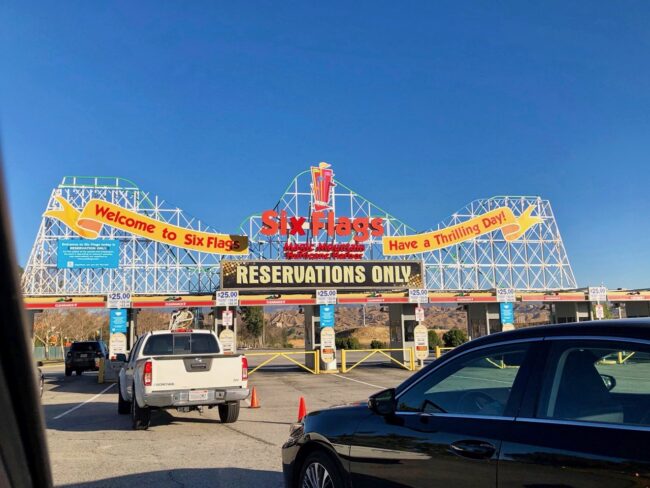 … we slowly crawled to the parking area, where we were immediately mesmerized by the sight of hundreds and hundreds of orange cones.  A gift from some birds in our front yard tree left a partially obstructed view. 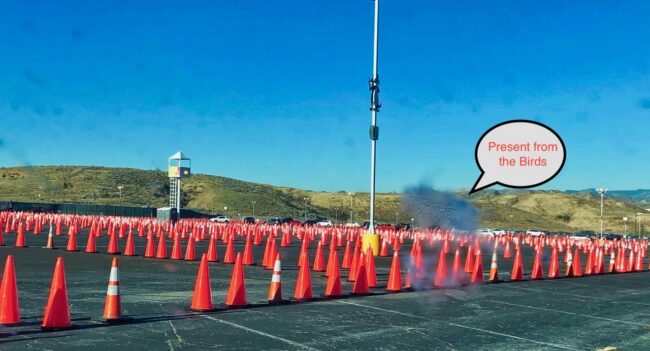 After nearly circumventing the parking area, we started to weave (carefully) through a maze of those brightly colored cones. I felt like I was in a class at The Bob Bondurant High Performance Driving School, except for the fact I was only going five miles per hour. 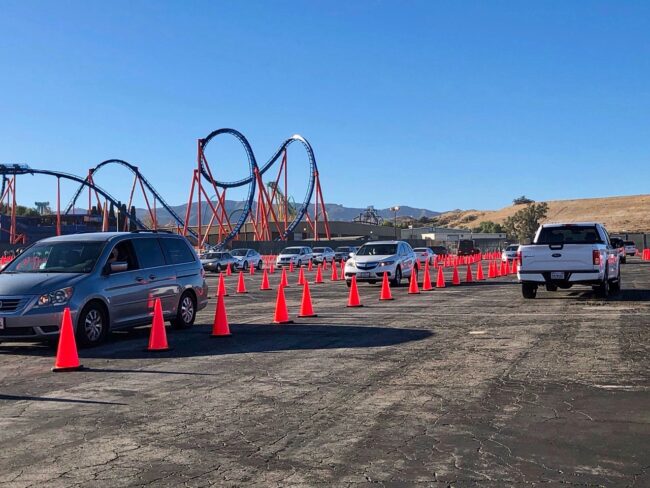 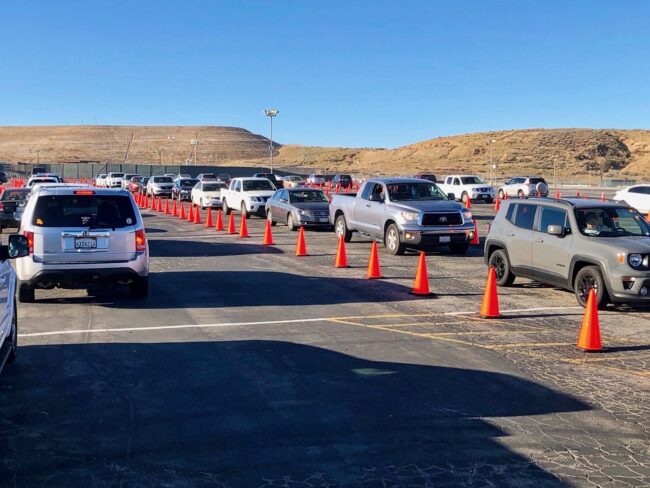 Deftly eluding the orange menaces, we were first checked to verify that I had an appointment. Looking at my long, gray hair that makes Albert Einstein look well coifed … 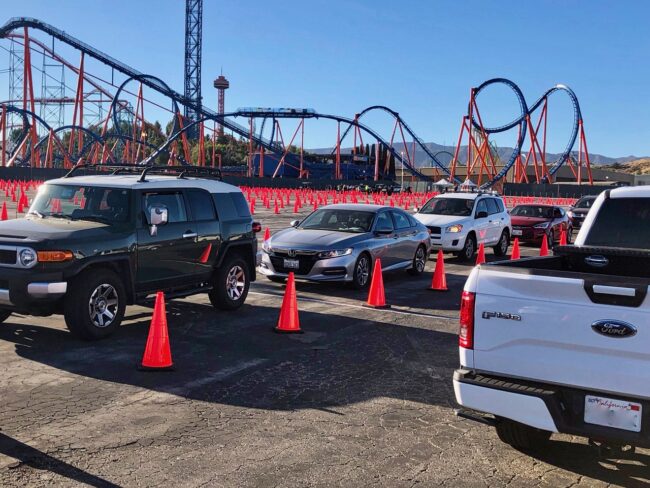 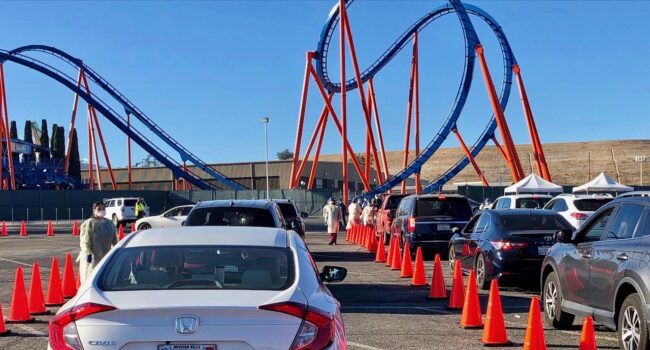 At the next checkpoint, I was questioned about possible allergic reactions to drugs. I told the young lady that I was allergic to penicillin. She immediately slapped blue tape on the front window, which was quite an improvement to what the birds had done to it overnight.

I was very close to my allotted “Pod,” when I was once again stopped. The gentleman, looking at the blue tape, said I would not go into my Pod, which already had lots of cars lined up, and told me to proceed to the last pod where, I assumed, sickly old geezers like me with allergies go.

The line was devoid of cars except one, but that didn’t mean trouble wasn’t around the corner. My intrepid photographer (aka Tracy) decided she would jump out of the car and take a photo for posterity of the short line. It didn’t turn out so well, because workers yelled at her to get back in the car. My wife … the scofflaw. 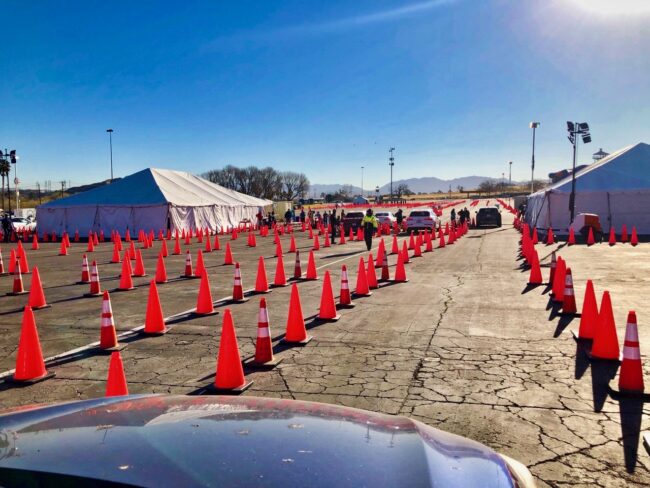 I pulled right up to the Vaccination Lady (not her real name), gave her some pertinent info and waited for the injection that some say really hurts. After my shot in the arm, I said, “Is that it?”  I didn’t even feel the needle, but Tracy assured me I had received the injection.

We then pulled up about 100 feet to another station, where I was instructed to sit for half an hour in case I started foaming at the mouth or began to sprout gills. A half hour later we were driving out at 9:48, which just happened to be the same time I was to be originally vaccinated. It was pretty slick, and my Covid shot was in the rear view mirror.  In addition, all the volunteers were quite pleasant, even the ones who reprimanded Tracy.

Now, about that foreshadowing. Our friend Susan also received an injection on Thursday morning at a different location. She received the Moderna vaccine, while I received the Pfizer vaccine. Susan received the same “I’ve been vaccinated card” that I had gotten. The one (big) difference is she already has an appointment to receive her second dose in February, while I was told I have to make another appointment when one becomes available.

Now that everyone knows about the website, getting my second vaccine reservation will have to take the computer skills I use when purchasing tickets to Hamilton.  However, “I am not throwing away my shot!” 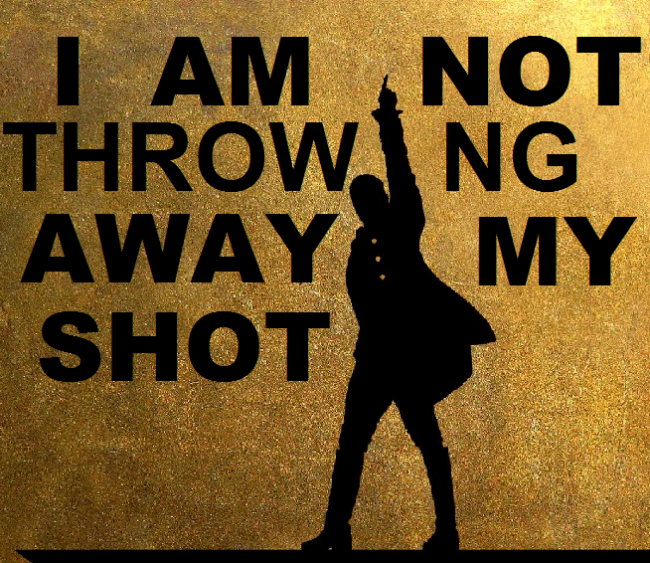 That said, I am very excited to get shot number one under my belt (in my arm was better), and hopefully more vaccines will roll out soon so we can all have our two doses to make the world a better place to live. Until then … stay safe! 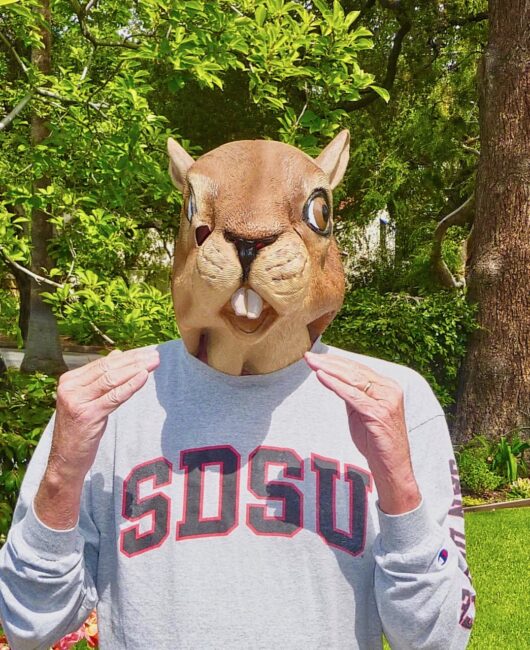 PS – As far as any reactions to the drug, just some mild cheek swelling, the eyes are a little out of whack and my two front teeth seem to be somewhat out of alignment. Truthfully, there were no side effects at all for me.  Get your vaccination!