“Over The Moon Italian Cuisine”

On the recommendation of the Sea Foam Lodge in Little River, our foursome had made dinner reservations a few weeks previously at Luna Trattoria in Mendocino. 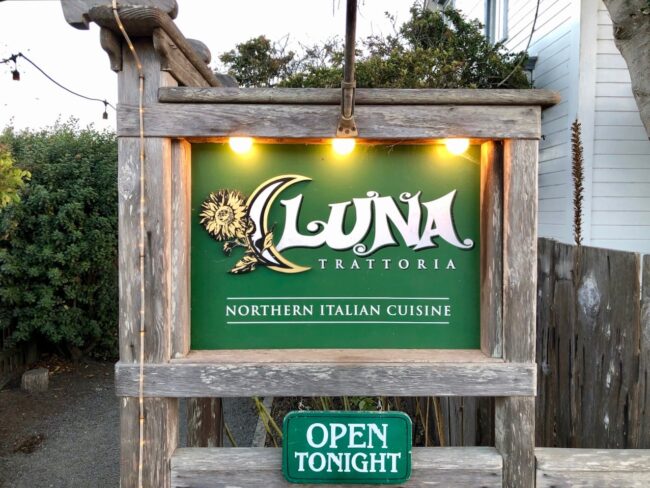 Tracy and Mary scouted it out an hour before our reservation time, and said it looked lovely. 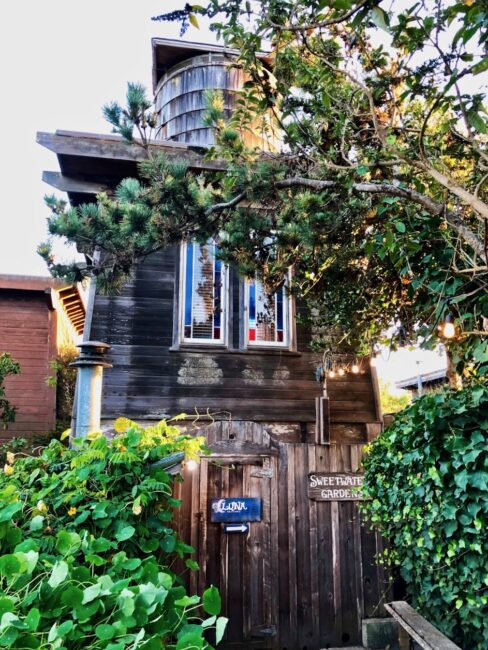 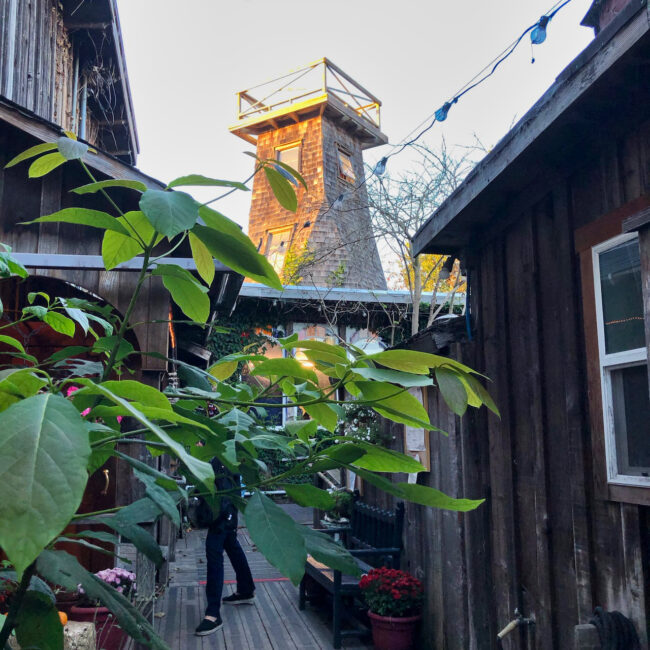 It was a glorious October evening in Mendocino, with dining outdoors on the garden patio spilling over with flowers. 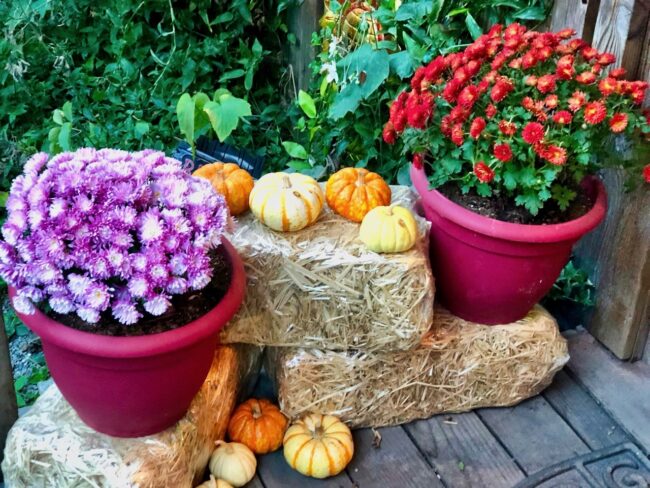 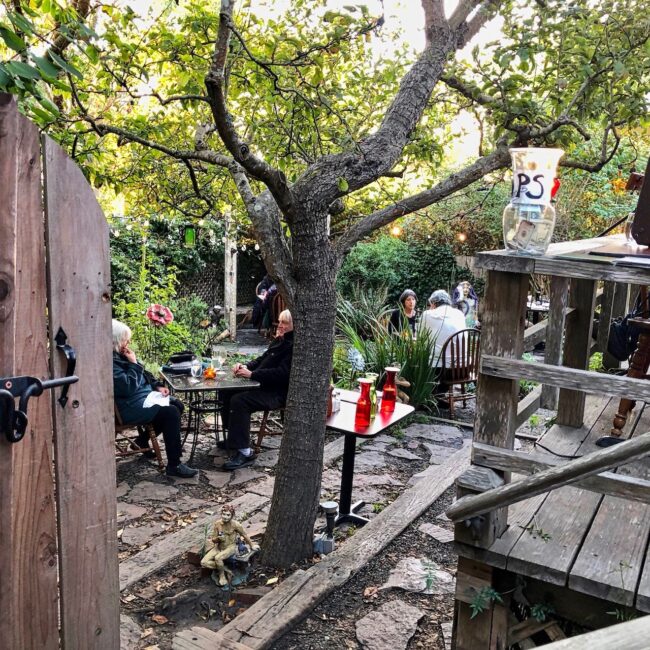 There was even an apple tree that nearly dropped an apple on top of the couple at the table adjacent to us. I believe it was the Sir Isaac Newton party.  I started humming Don’t Sit Under The Apple Tree, which at its core, was wrong. 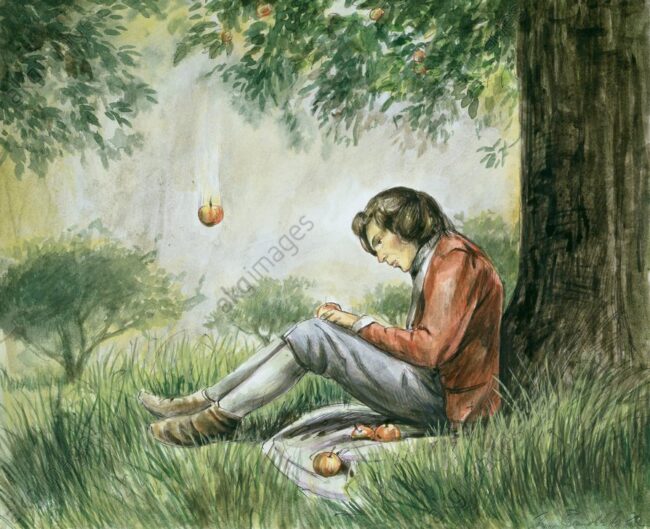 Besides the guests on the patio, many people stopped by to grab their pick-up orders. 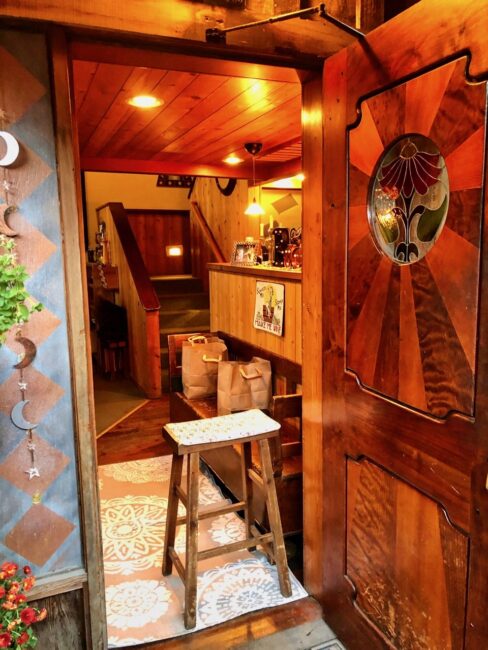 I donned my familiar 2020 restaurant attire, and we were ready for, what would turn out to be, a wonderful dining experience. 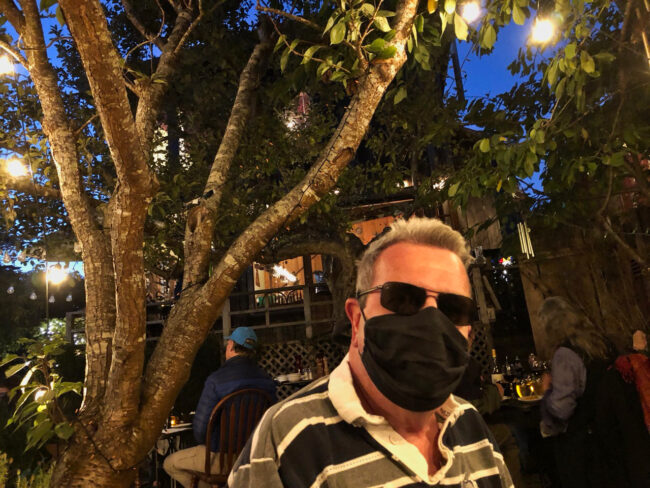 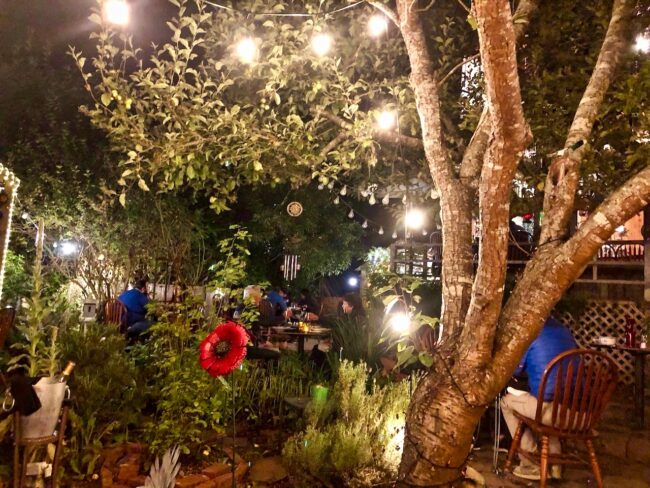 Our server, Lorenzo, came from a small village near Florence and was very knowledgeable and helpful about both the wine and menu selections. In other words, keeping with Florence tradition, we called him Lorenzo The Magnificent … waiter.

The pasta is handmade on the premises, and you can even watch the magic in action through the kitchen window (photo from Luna Trattoria website). 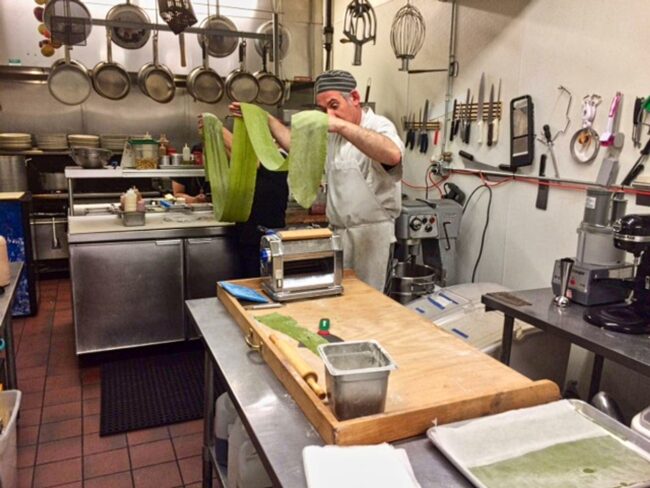 There was a full page of “Specials of the Week,” which made selecting the “dishes from family recipes created in Italy years ago” a difficult proposition. The restaurant dubs its dishes “Over the Moon Italian Cuisine.” 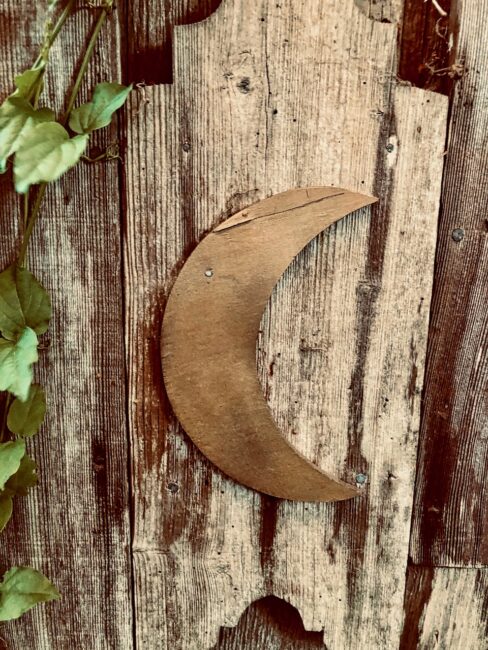 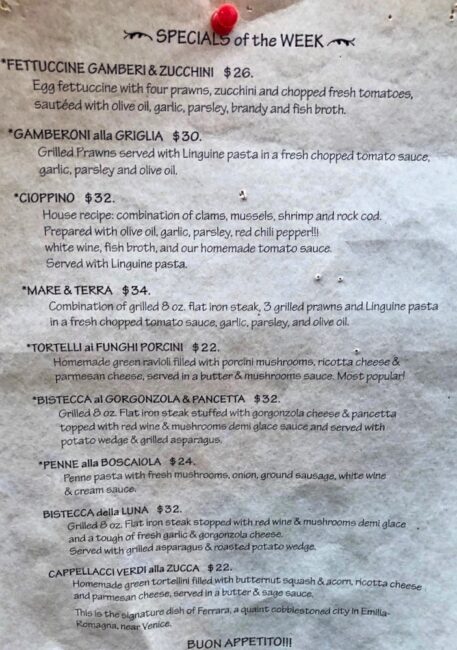 Lorenzo suggested a Sangiovese from the Emilia-Romagna region.  It was so good I bought some bottles when I returned home. 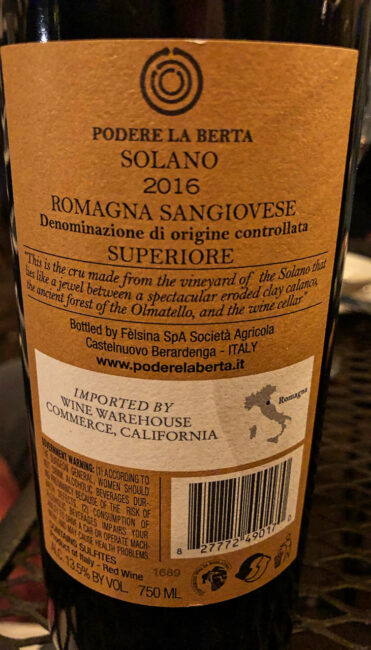 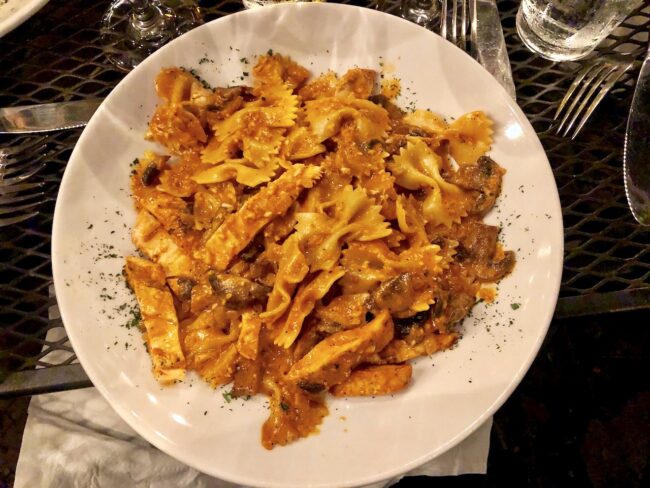 Kim started with … wait for it … the Caesar Salad, finally securing the world record for ordering the most Caesar salads in a lifetime. He paired that with the Linquine alla Vongole (authentic recipe from the Adriatic coast; steamed clams with olive oil, garlic, parsley, white wine and a touch of fish broth.)  Kim remarked that there were plenty of clams and that he thought it was very good. 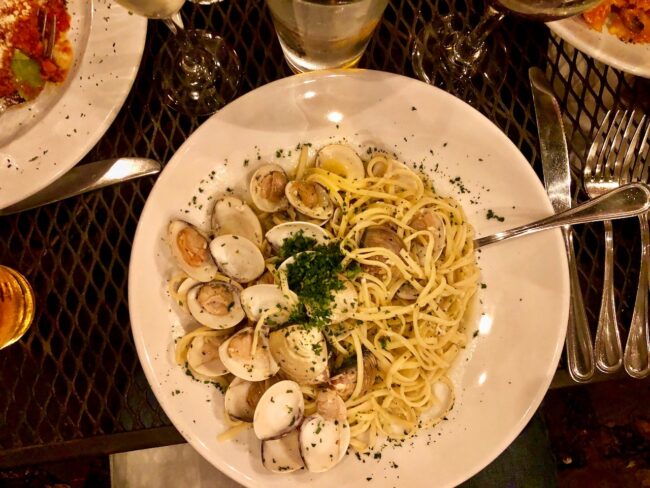 As there was a slight hint of autumn in the air, Tracy started with the Pasta & Fagioli soup. Just what the doctor ordered! She followed that up with the Orecchioni (green ravioli stuffed with ricotta cheese, Parmesan and spinach with a fabulous meat sauce). The pasta was light and silky. 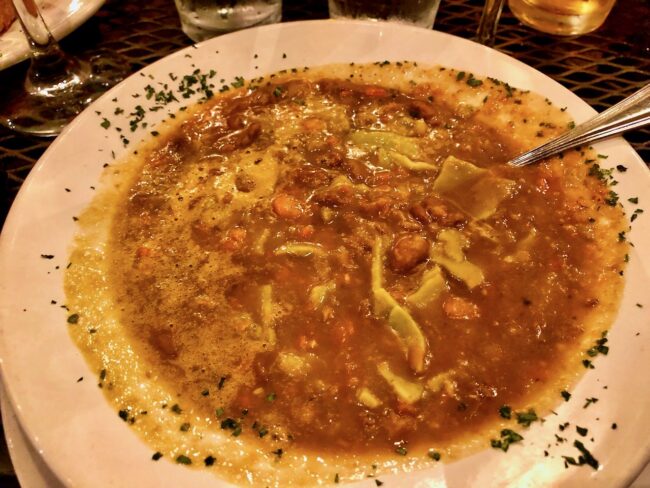 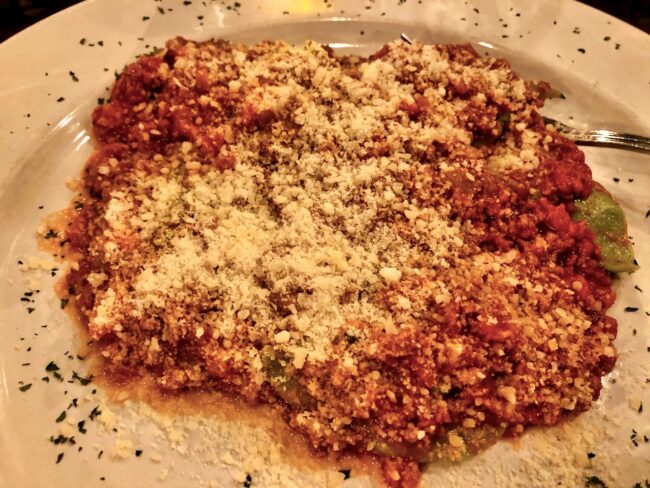 I believe I had the best meal of the evening starting with the bruschetta “classica” (grilled homemade Tuscan-style bread topped with chopped fresh tomatoes, basil and garlic). Wow! The tomatoes and basil were fresh, and the house-made grilled bread made for the perfect accompaniment. 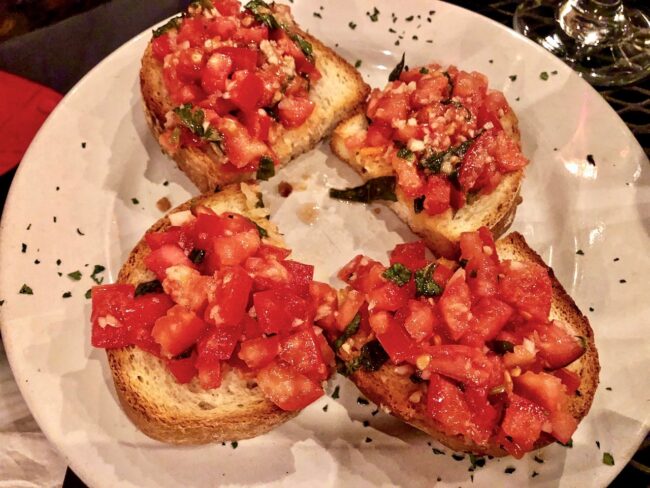 After consulting with Lorenzo, I ordered the gnocchi with a creamy Gorgonzola sauce. A self-proclaimed gnocchi aficionado, I declared these “light as a feather gnocchi, and the best I’ve ever tasted,” and I have been fortunate to dine on some great gnocchi in my time. Wow, again!  Lorenzo revealed that the secret to the recipe is half of a very cold potato, half flour and one egg. We will have to give that a try. 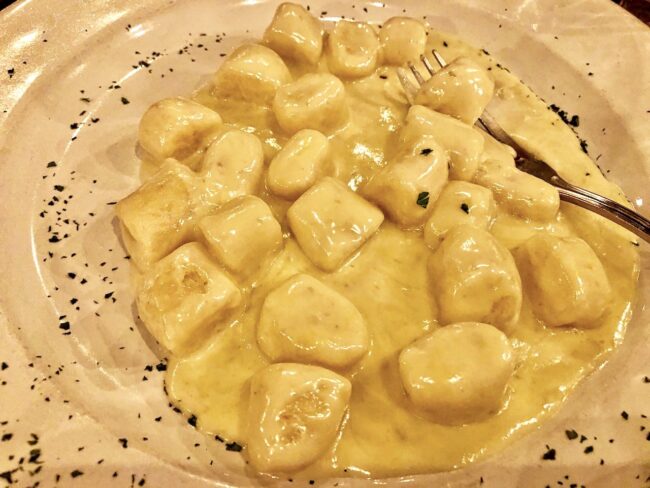 Being quite satiated, we had planned on saying “no” to dessert, however, after consulting with Lorenzo The Magnificent, we ordered the Semifreddo alla Zabaione (Italian style ice cream cake flavored with zabaione and dark chocolate chips with chocolate drizzle). This was really good and a perfect ending to the evening. 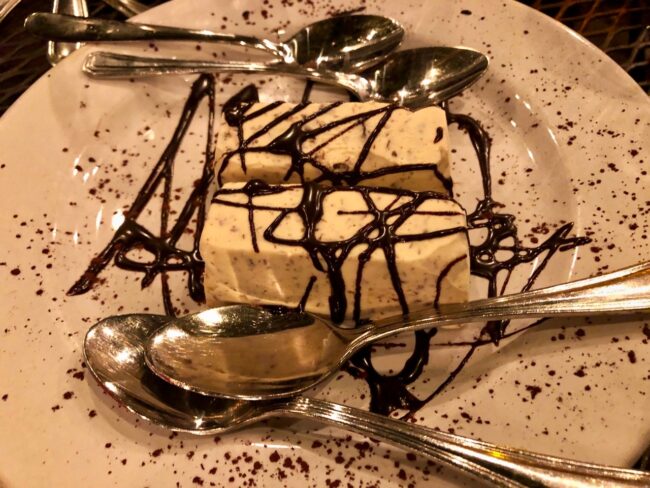 It was a very dark and, as Don McLean might sing, starry, starry night as we returned to the cozy comfort of the Sea Foam Lodge and dozed off to the sound of the ocean waves. 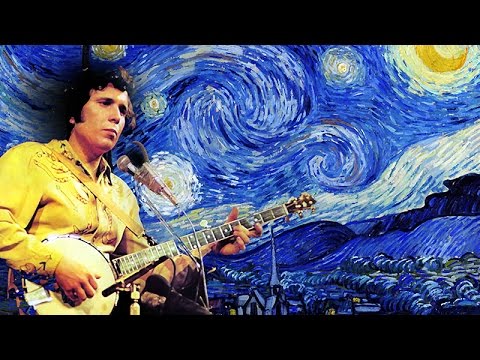 Luna Trattoria had been a fantastic choice for the first meal of our abbreviated trip to Northern California. 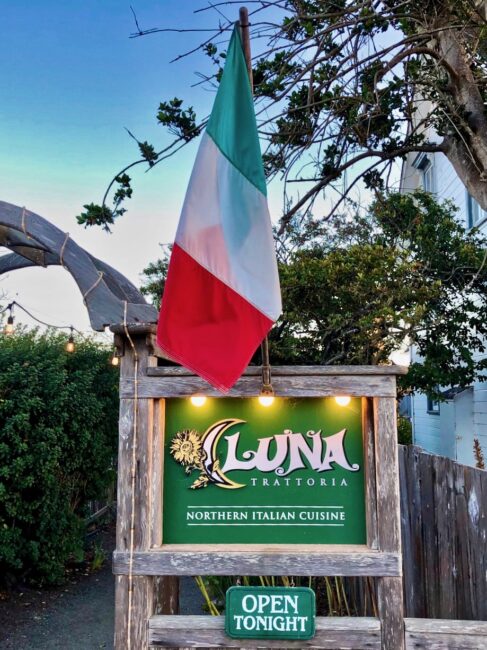 During crazy Covid times, there are two seatings nightly (see below), and reservations are highly suggested, as the place was socially distanced, but not an empty seat to be found.  Everything from the food to service to ambiance, including live music on the patio, made for a very pleasant and mouth-watering evening.  Grazie Lorenzo!