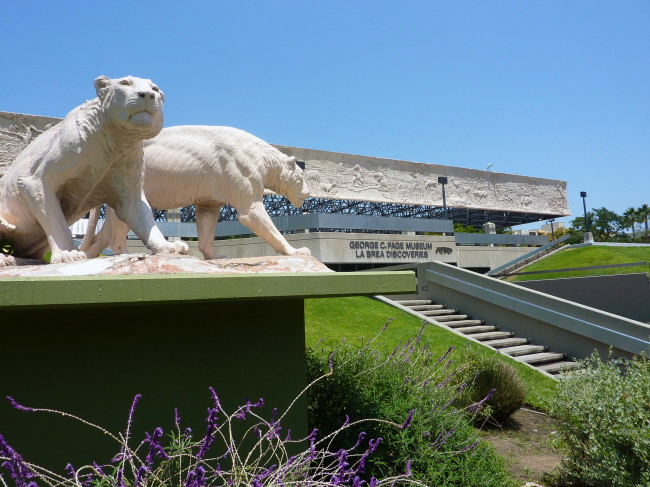 I am a native Angeleno, yet at age 59 years and 362 days, I had never visited the La Brea Tar Pits….a fact that stuck with me…until today, that is.  Even worse, I had never even heard about the museum that was attached to this famed spot.  It’s always the places in your own backyard that you never think about, especially when the backyard is full of tar. 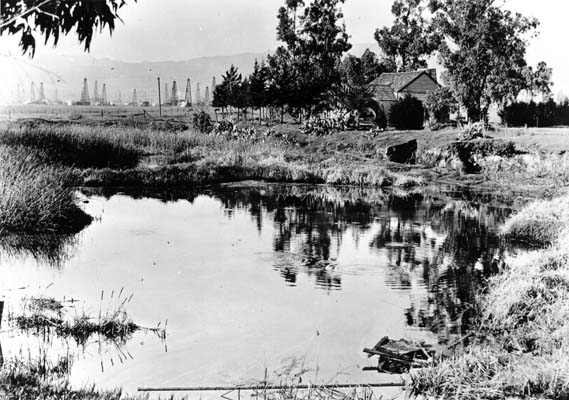 Tracy and I drove to the Hancock Park area of Los Angeles (after a visit to the Farmers Market) to see what I had missed all these years. As I was to find out, more than 11,000 years ago the Los Angeles area was inundated with wildlife, and none of them were named Lindsay Lohan or Paris Hilton. Who knew? Instead, the area was full of camels, wolves, saber-tooth cats, American mastodons (fancy name for elephants) and other beasts. Sure, they were ferocious, but you’ve never heard of a drive-by shooting by a mastodon, have you?  Of course, you’ve never probably driven with a mastodon. 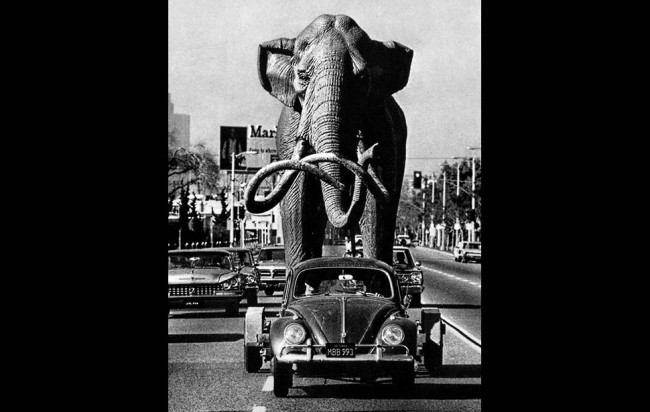 Then, in a Jed Clampett-moment, these animals discovered that “up through the ground came a bubbling crude.” But instead of Texas Tea, this was California T, as in Tar. And instead of buying a house with a cee-ment pond, these poor creatures found themselves stuck in their own sticky pond of death. 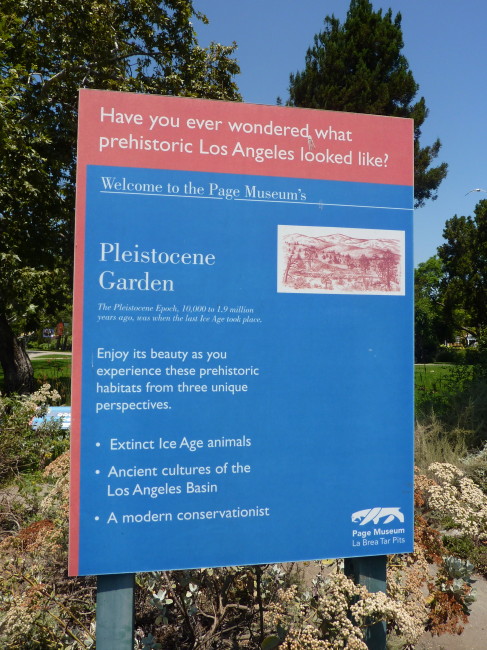 Excavations of the bones started in 1913–1915 and still go on today. Tracy and I paid $9 to park, and we headed over to the Pleistocene Garden and started our walk. I came upon a giant bear that I thought had been one of those deceased animals, but Tracy assured me it was just a sculpture of one (the bear is on the left). The garden is divided into four ecological systems: Coastal Sage, Riparian, Deep Canyon and Chaparral. 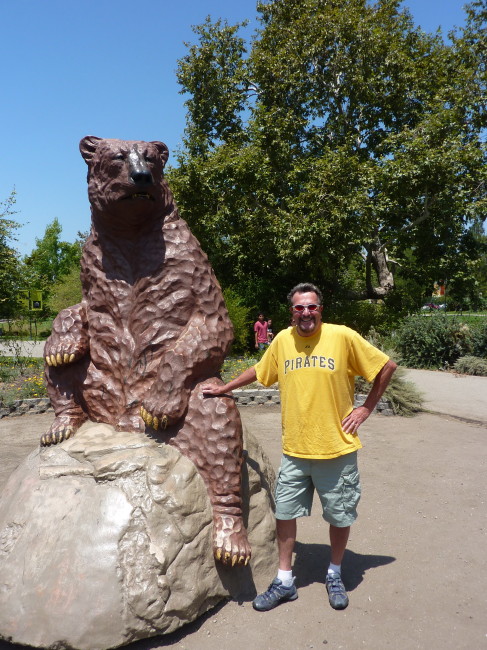 We stopped by Project 23, which sounded like something from the X-Files. Instead, in 2006, when the Los Angeles County Museum of Art (LACMA) began to construct a new underground parking garage, 16 new fossil deposits were discovered, including the semi-articulated (which I am sometimes referred to by friends), largely complete skeleton of an adult mammoth. We stopped by for a quick photo. Scientists will be having a field day at this site for years to come. 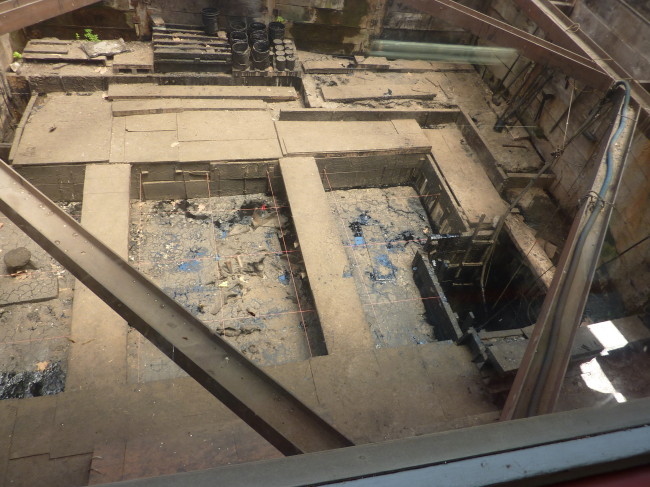 We walked by a couple of tar pits (truthfully not all that exciting except to think that elephants were swallowed up in this stuff). 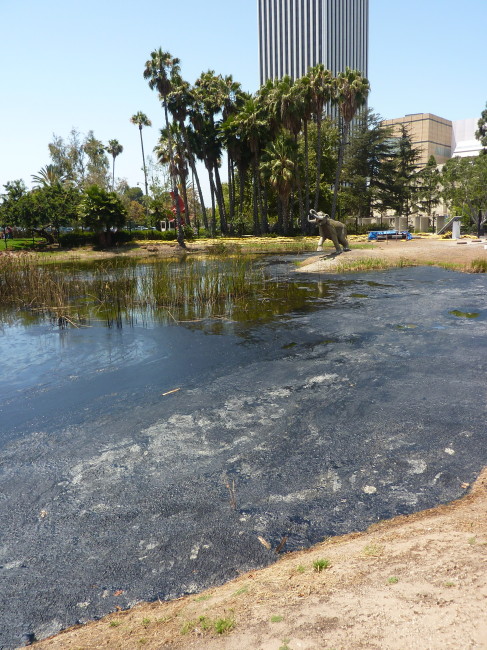 Behind us stood the museum that I never knew existed, but since were here now, it was time to pay a visit to the Page Museum (officially the George C. Page Museum La Brea Discoveries). The museum opened in 1977 and tells the tale of the tar pits and presents specimens from them. We paid our $11, and the first thing we entered was a theater showing a film on how these varmints met their demise. The film was actually pretty enlightening, and the kids loved it when all the animals were being devoured by other animals and then sucked into the tar. 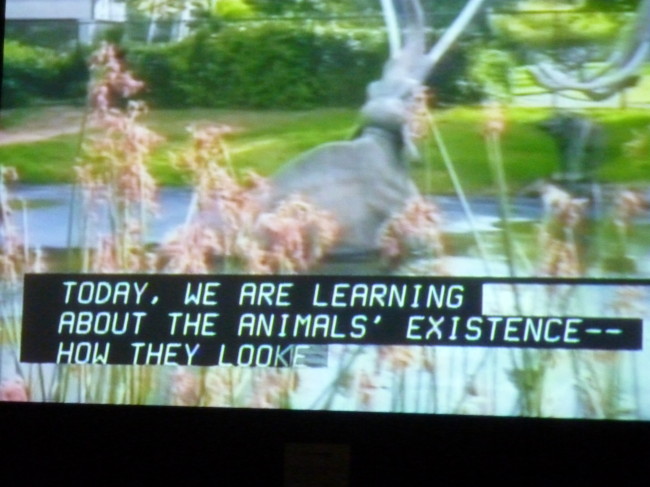 After the movie, we walked around the museum (it only took about 1/2 an hour). We encountered numerous fossils of animals who met their demise in the tar. They ranged from an extinct camel… 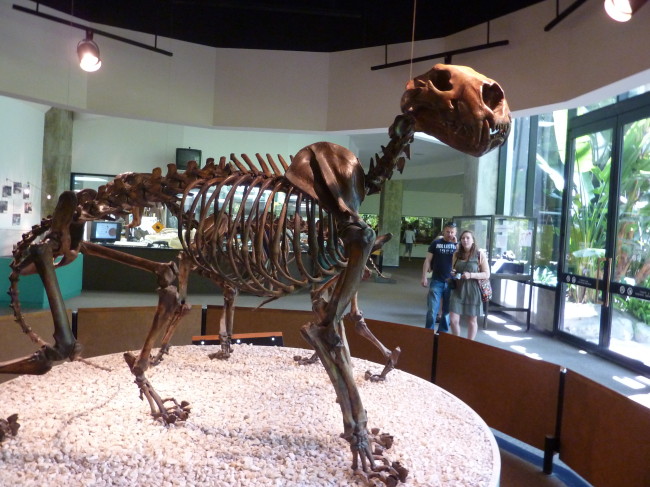 …to big, flying birds (not the kind you see on Sesame Street)… 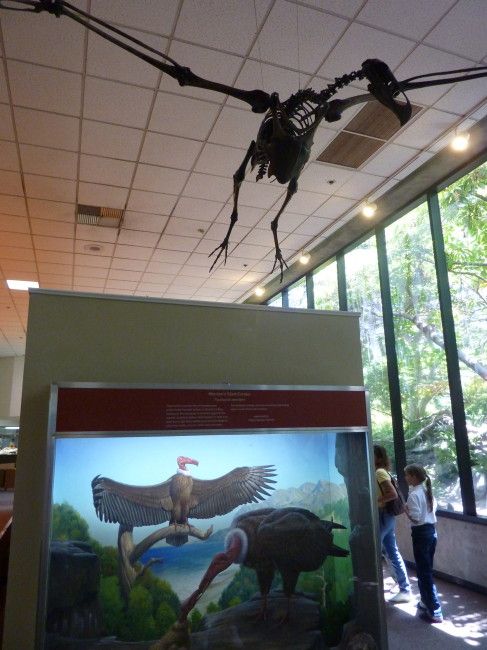 …to Columbian Mammoths. All in all, the Page Museum has more than one million fossils from 650 different species. Now that was impressive! 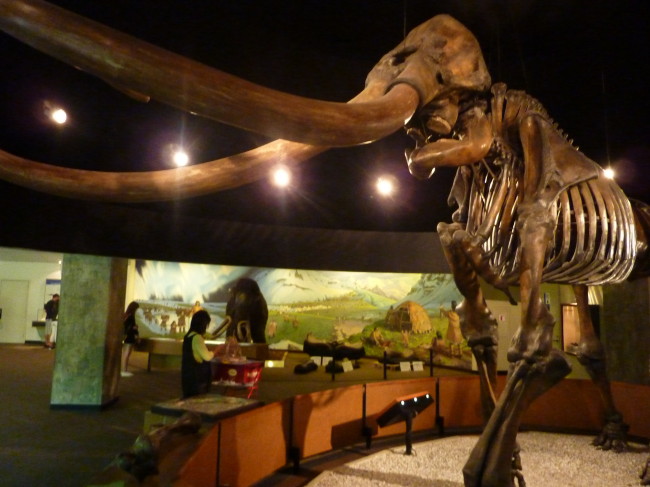 We stopped by the Fish Bowl where scientists and volunteers are constantly working (except today, I guess). This is where Ice Age fossils are cleaned, studied and prepared for exhibit. 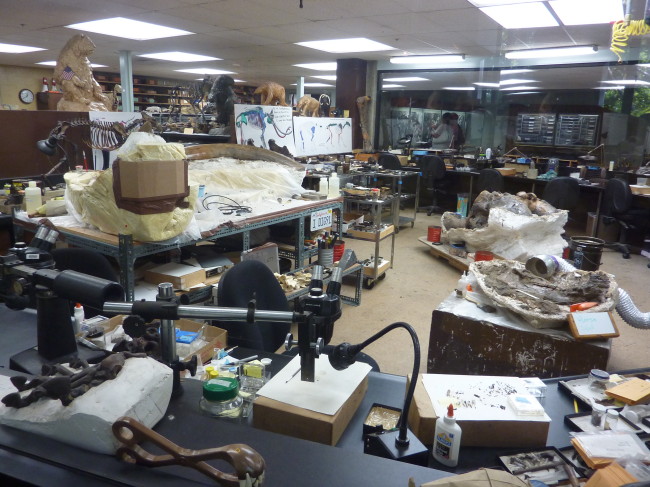 My favorite exhibit exhibit was the one that looked like my tabby cat attacking a giant mammal. Yes, I am easily amused. 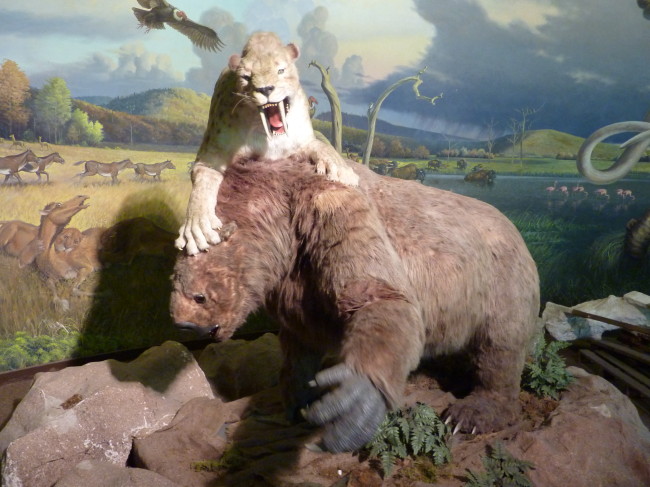 There are also displays that give you information regarding all the animals who were sucked in by the tar, and, no, I did not tell Tracy I would walk a mile for a Camel. 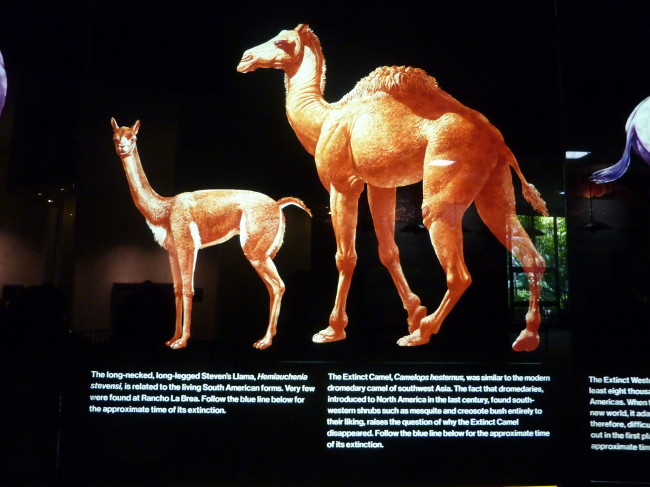 It was also fun trying to pull up on a lever to show you hard it is to escape tar. 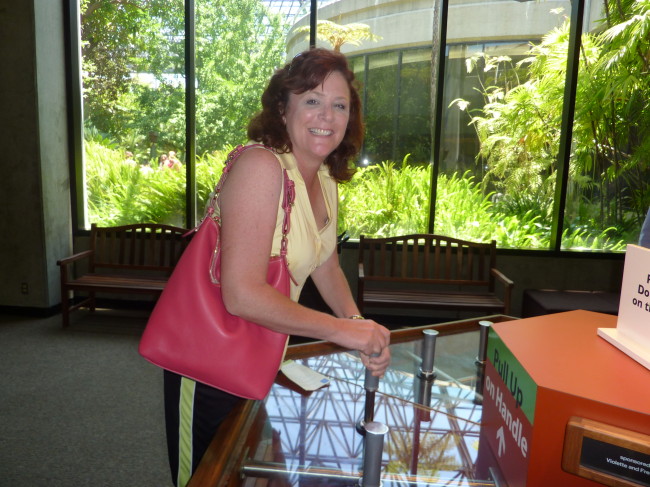 I would have definitely been up to my ears in tar had I been a wildebeest. 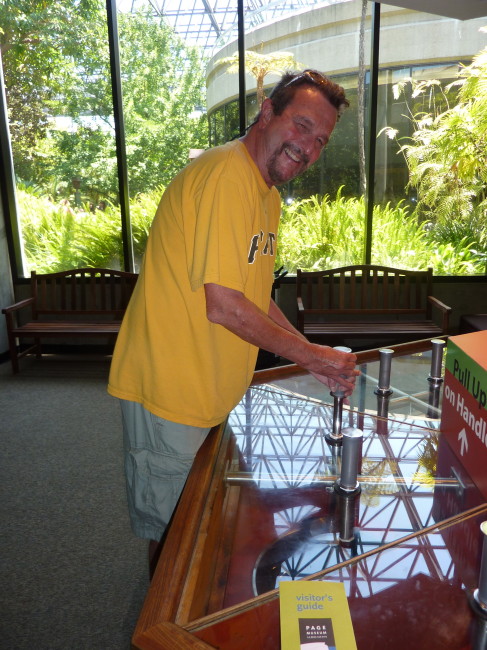 Before we departed, we headed out to the Atrium, where a nice lady was feeding the Koi fish and explaining more about the museum to a group of kids. Children would really enjoy visiting here, and it wasn’t bad for an old man nearing 60 either. 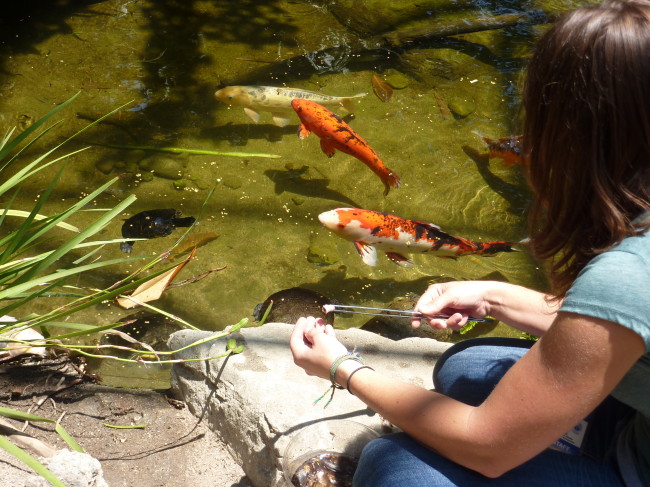 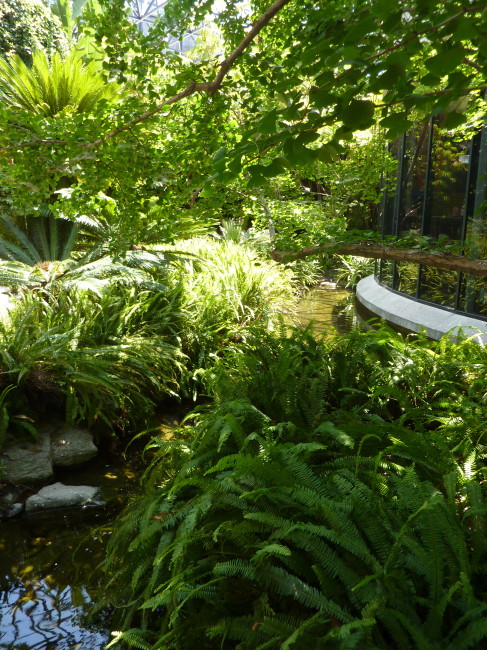