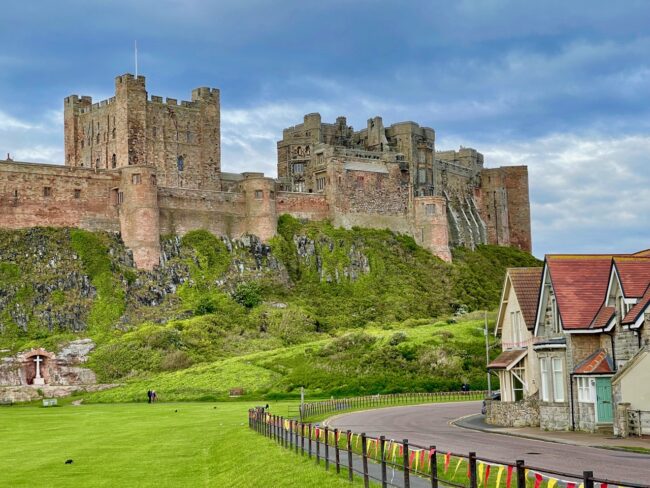 We stayed in Bamburgh for three nights on our England/Scotland trip, and each evening we had a great dinner at three separate restaurants. Since they were so good, I thought I’d do one post that includes all three.

Although Bamburgh is a very small village nestled under the shadow of Bamburgh Castle, it and the surrounding area have a few excellent dining choices. On our first night, we dined at the recently renovated restaurant in The Lord Crewe Hotel. 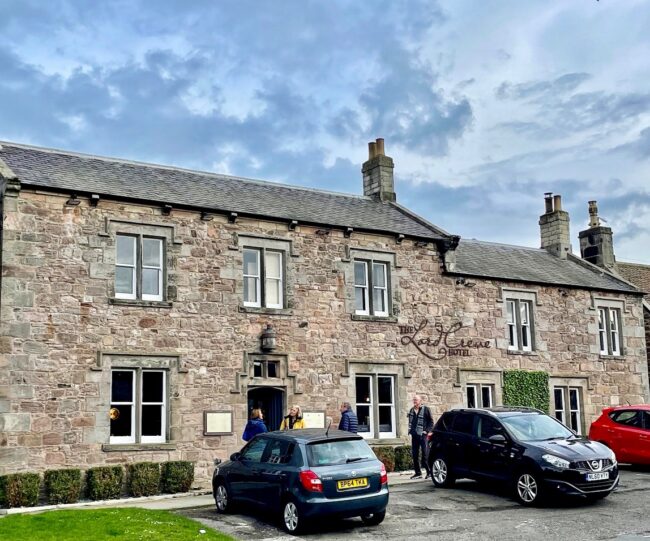 The renovation was so new, there was still the faint scent of new paint. They did a nice job.From the website, “With a strong focus on high-quality, local produce, specialising in luxurious seafood dishes, our menus are guaranteed to tantalise the tastebuds.” Not only was the food excellent, the wait staff was friendly, jovial and attentive. 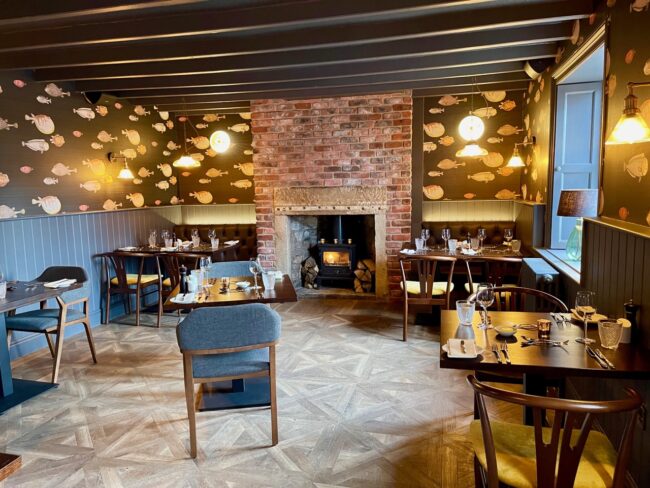 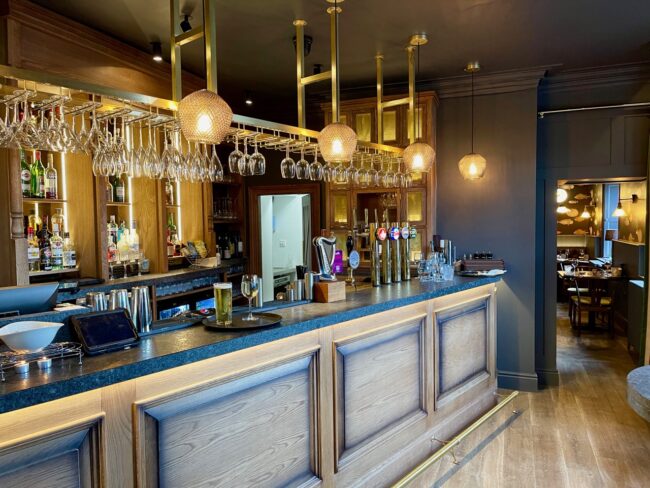 Tracy and I started off the evening with the Roasted French Onion Soup with truffle croutons. While Mary opted for the local Lindisfarne Oysters with lemon, caper and shallot vinaigrette. 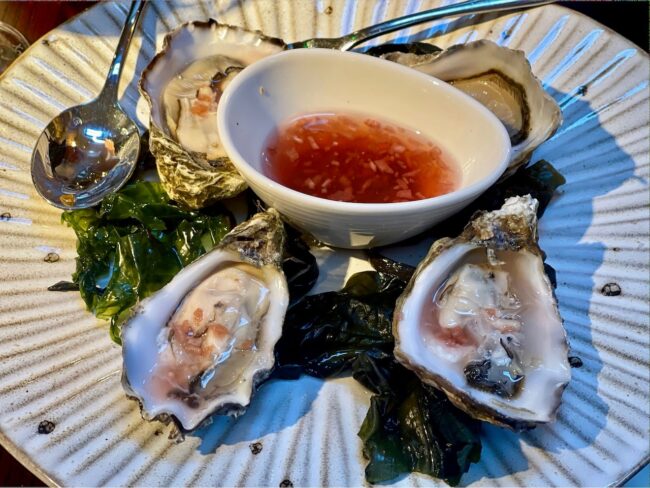 For dinner, I ordered the Beer Battered Cod with tartare sauce, lemon and hand-cut chips. The cod was very, very good, and so light and crispy that I proclaimed it was the best fish and chips since our New York City trip in 2011 when we dined at Pastis. The side of mushy peas somehow ended up on Tracy’s plate. 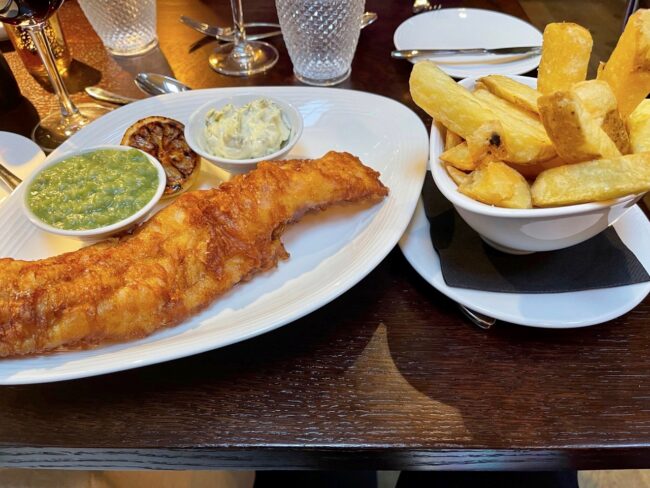 Kim and Tracy took the seafood route and both ordered half of the Grilled Lobster Thermidor with Queenie scallops, tiger prawns, mustard, cognac and a mature cheddar. The Grilled Lobster came with a choice of watercress and chips or buttered new potatoes. 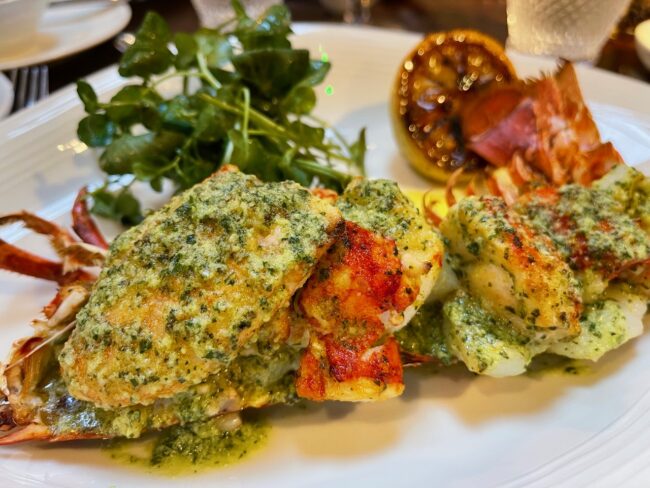 In a surprise move, our fish fiend Mary went with the special Wild Mushroom Pasta topped with an egg. 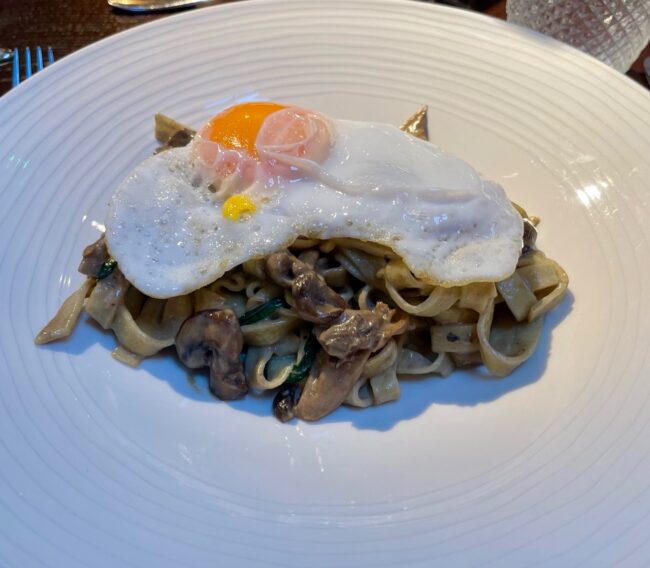 And no, I did not drink all the wine, but sadly there was no room no room for dessert on this evening. 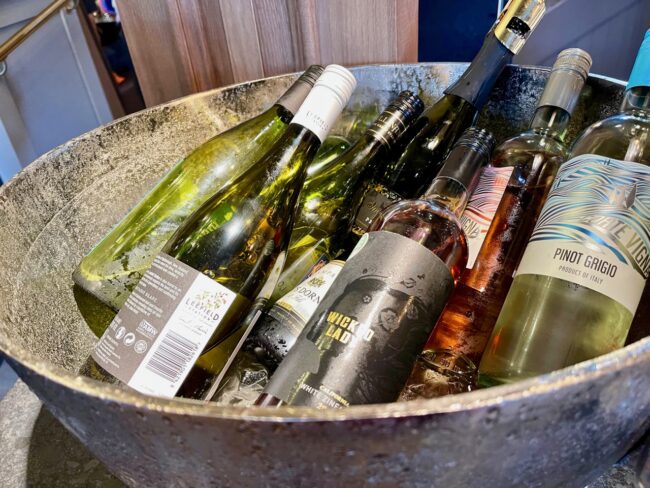 There are dog-friendly seating areas in the restaurant, and dogs are also welcome in its beer garden.

The White Swan Inn located in nearby Warenford was recommended by the folks at our B&B who enthused, “The Chef is brilliant!” Warenford is about a 15-minute drive through the backroads of Bamburgh. 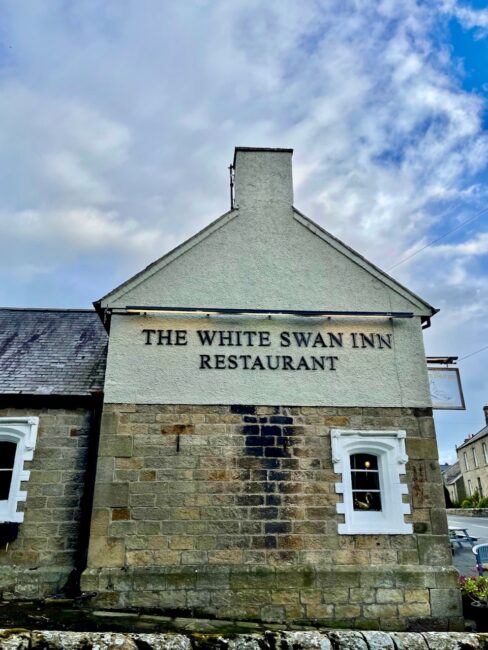 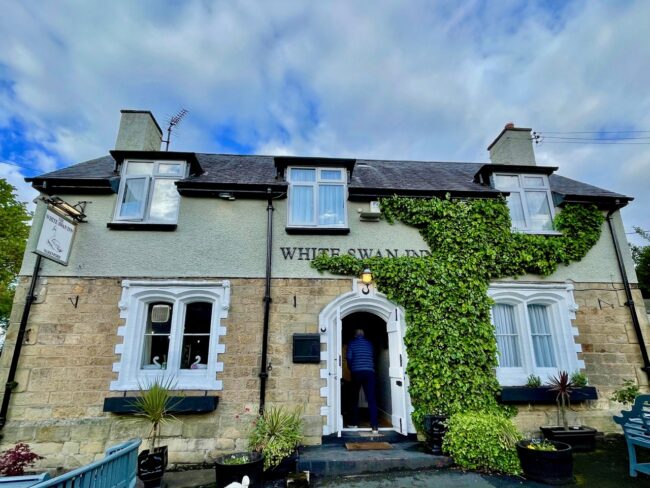 It is a quaint inn with a cozy pub and a restaurant in the back. 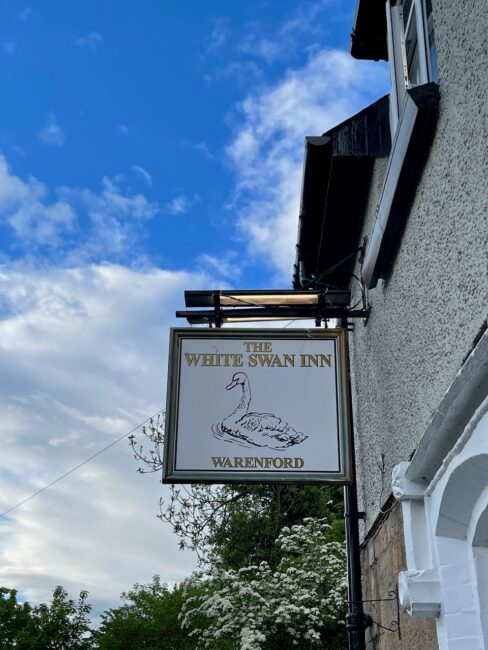 Painted on the ceiling of the pub are the following words of wisdom, “In wine there is wisdom. In beer there is freedom. In water there is bacteria.” My kinda place!

Kim and Mary shared a starter of Seared King Scallops served on crispy pork belly with a sweet chili sauce. 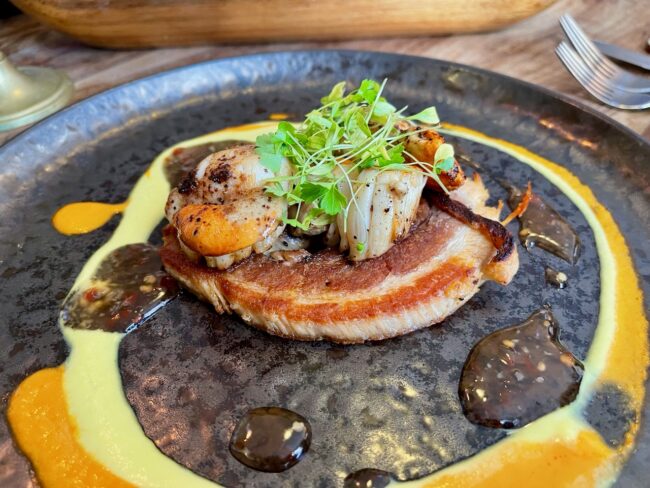 While Tracy and I shared the house made Chicken Liver Pâté served with red grape chutney and toasted sourdough bread. It did not last long. 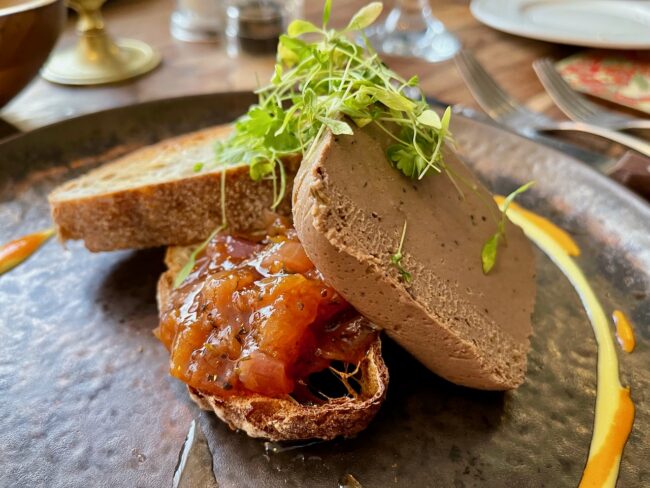 For dinner, Kim decided upon the Supreme of Halibut served on a Samphire, Smoked Salmon and Crab Risotto. We subsequently learned that samphire is an asparagus type vegetable apparently referred to as sea beans in the States (although I’ve never seen that on a menu). 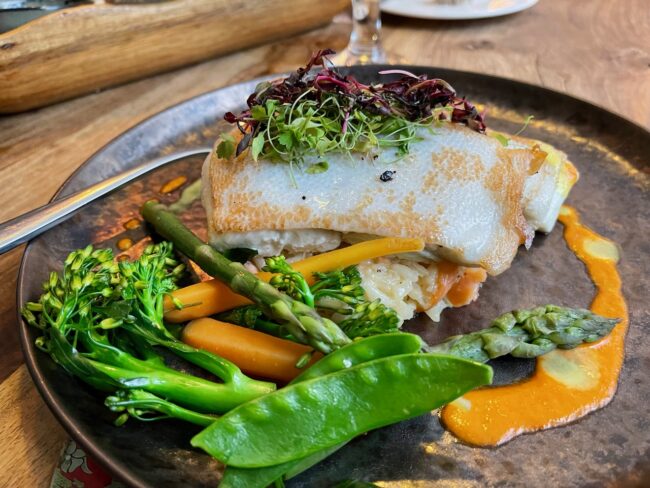 Mary had what I think was her first beef dish of the trip, the Ribeye Steak with peppercorn sauce, tomato and mushrooms and chips. Fish in the immediate vicinity gulped down some water and breathed a sigh of relief. 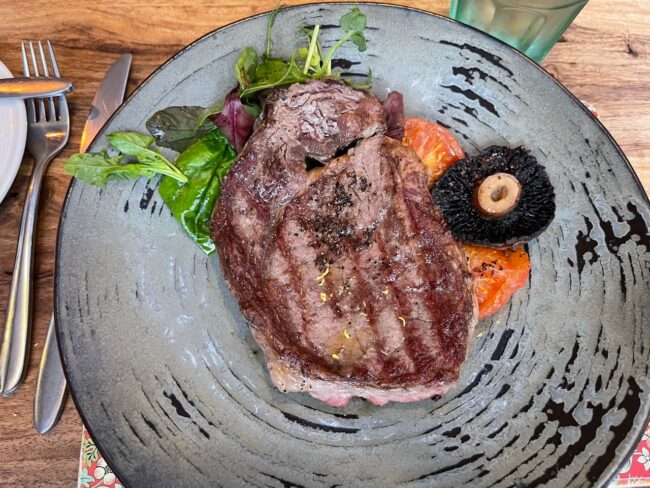 Tracy ordered the Barbary Duck Breast carved onto a confit of duck and marmalade pithivier accompanied by potato fondant.

Not often is one of my favorite dishes on a menu, so I happily ordered the Fillet of Beef Wellington served with a rich au jus and chips. 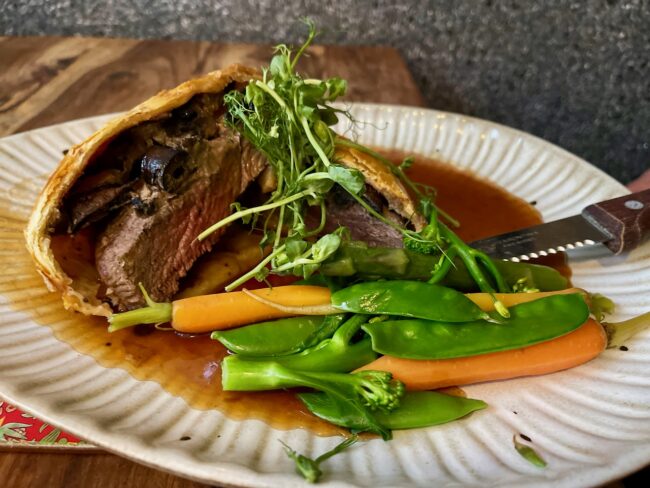 Afterward, when we complimented the chef to our waiter, he replied, “Thank you. I’ll be sure to let the wife know.” All in the family!

On our last evening in Bamburgh we dined at the very popular The Potted Lobster. It’s so beloved by the locals and visitors that I had to make reservations six months in advance to make sure we got in and also pay for the reservation (which was deducted from our bill). I can see why people love this restaurant. 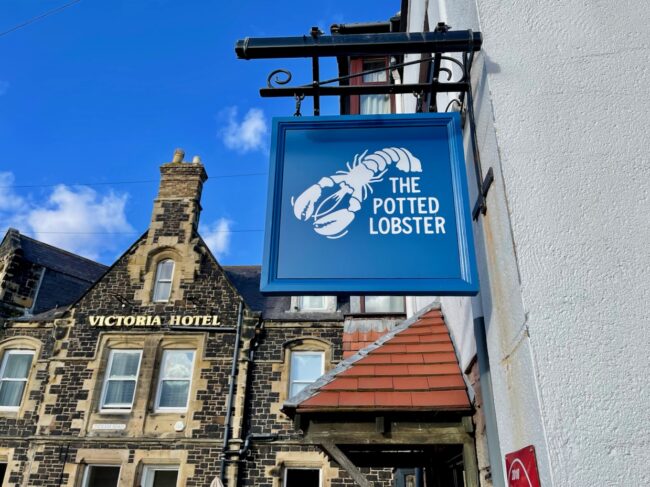 After a day spent exploring Bamburgh Castle, Berwick-Upon-Tweed and a trip out to Holy Island we were starving. The Potted Lobster had a charming, seaside cottage feel and, again, an excellent server. 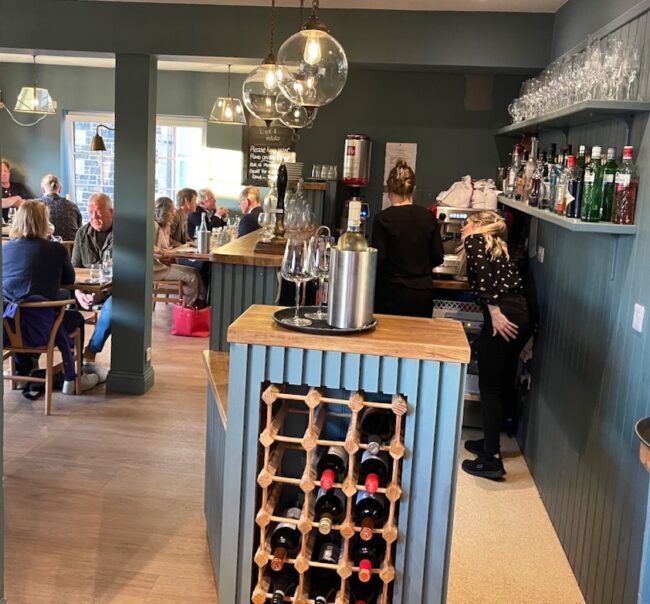 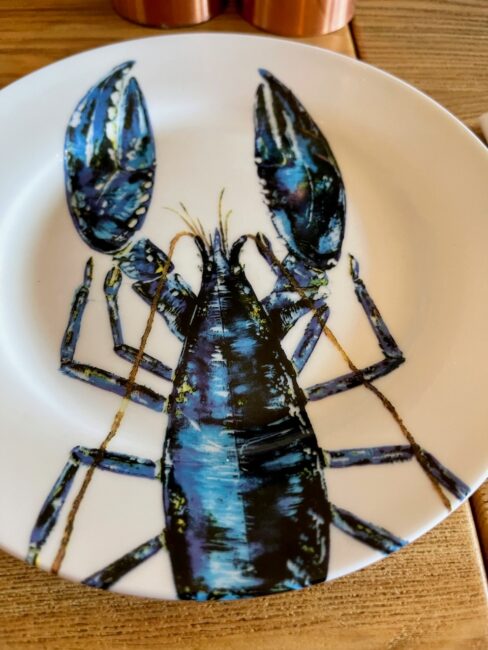 The specials were listed on chalk boards. By the way, “Hairy Bikers” are two British television chefs.

My starter was so delicious it sold out and was erased from the menu board before Tracy could take a photo. 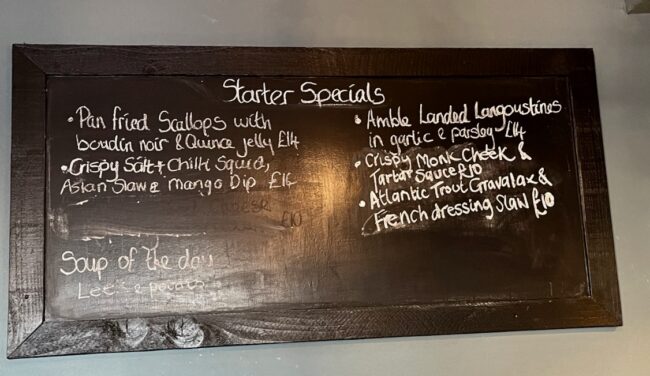 Luckily, she wrote it down; twice baked cheese soufflé with spring onions. This ranked up there as one of my favorite starters ever! As the Barefoot Contessa would say, “So good!” 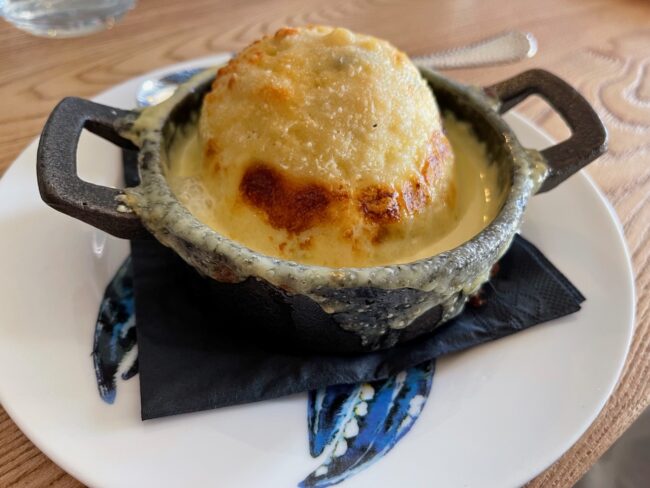 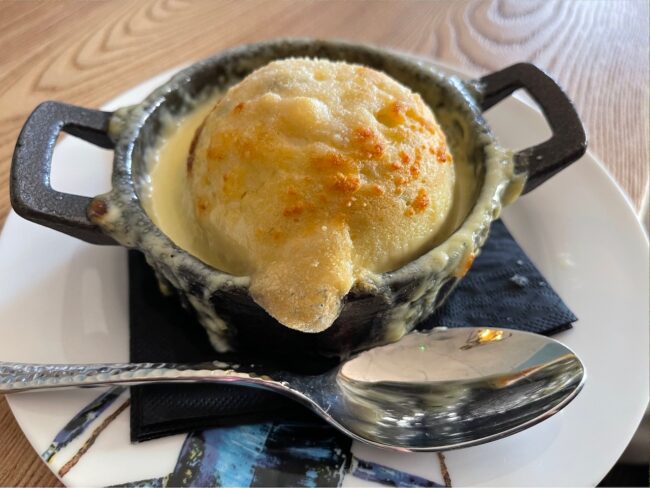 I followed that up with the Twice Cooked Shoulder of Lamb, buttered mash and red wine jus and homemade mint sauce. Sadly, the mint sauce didn’t arrive, but it wasn’t until after I devoured the dish that I realized I had forgot to ask for it.  Kim also ordered the lamb, but he started with the soup de jour of Leek and Potato. 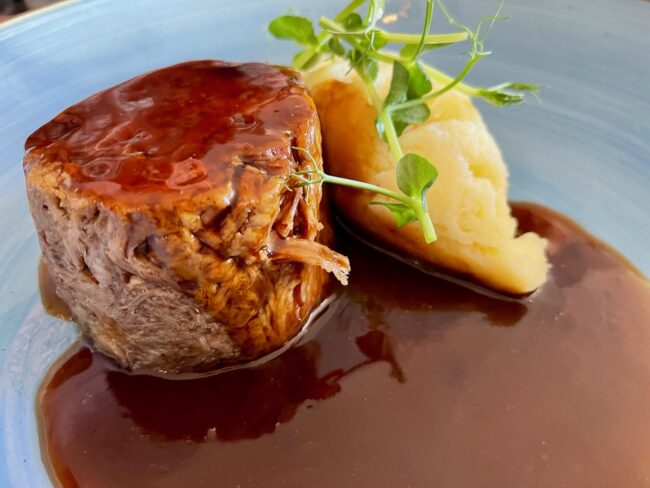 Mary also started with the Leek and Potato soup and went with the Sea Trout special with sautéed potatoes, wild mushrooms, smoked pancetta and leeks in a cream sauce. There were also pea tendrils, which were everywhere on this trip and for a reason … they are so tender, sweet and delicious. 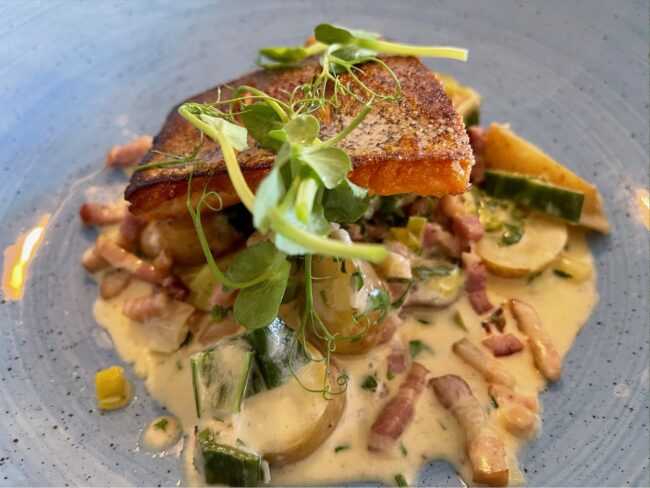 I saved Tracy’s meal for last because she ordered something we weren’t entirely sure what it was; Pan Fried Scallops with Boudin Noir and Quince Jelly. Hmmm, Boudin Noir? When we inquired, the server said it was French and delicious, so what the heck. And, it was delicious! Tasted like some sort of paté. We subsequently learned boudin noir is the French version of black pudding and, yes, she would order it again. 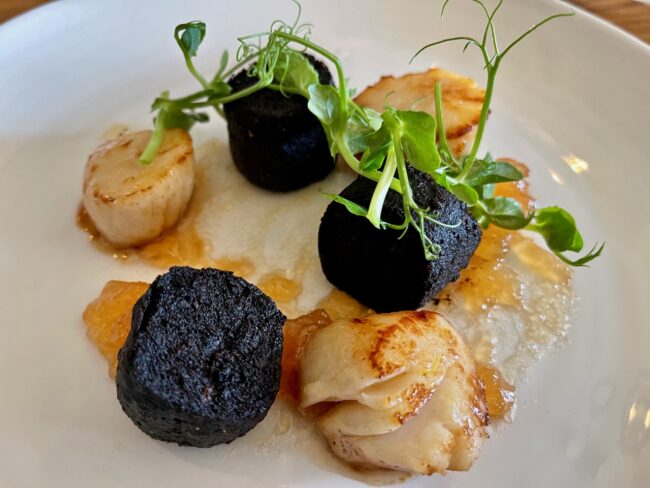 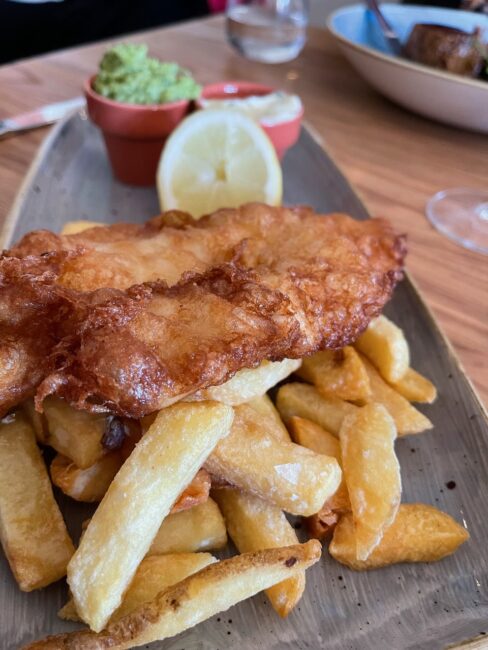 Once again, we were all too full for dessert, but the Affogato at the table next to us somehow ended up on our bill. I know it was good because the lady who ordered it gushed about how great it tasted. I hope she paid it forward.

I recommend all three of the above restaurants should you visit Bamburgh.