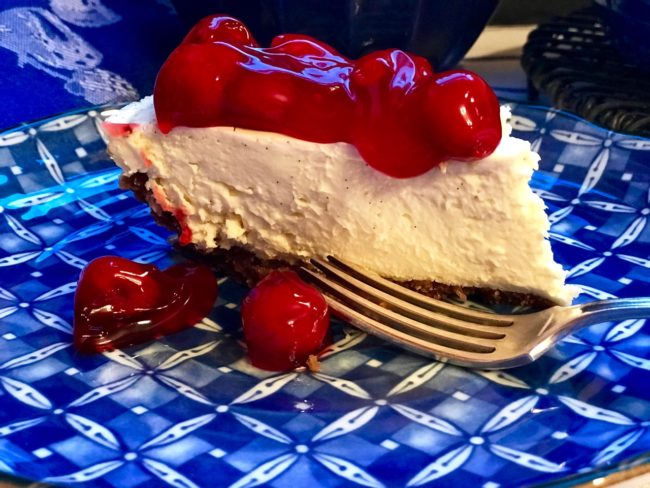 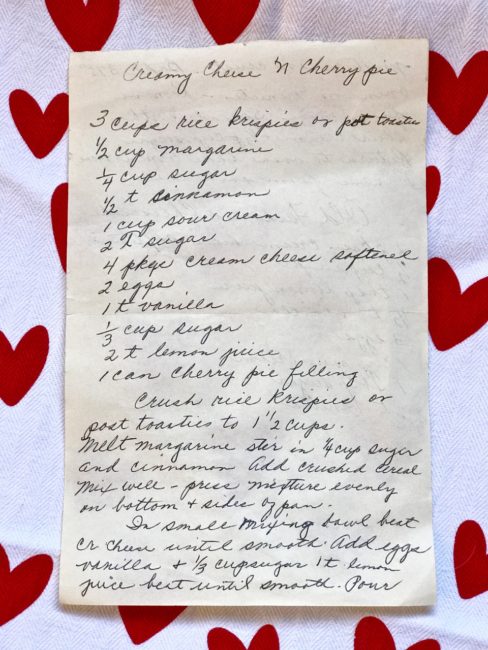 Recently, I was going through my Nana’s recipe cards looking for some old-fashioned inspiration when I came across a handwritten recipe for Creamy Cheese ‘N Cherry Pie made with Post Toasties or Rice Krispies cereal. For those of you who do not remember Post Toasties, they were the Post version of Corn Flakes. Post Toasties are no longer available so Rice Krispies it is.

Neither my mom or I remember this pie, but it sounded intriguing, so I quickly ordered up a deep dish pie pan on Amazon for same day delivery and sent Tom to the store for ingredients. By 3 p.m., my deep dish pie pan still had not arrived, so I had to forge on without it. (It eventually arrived late in the evening, and I used it when I remade this pie to tweak the recipe which explains the different pie photos and, for those of you with sharp eyes, the discrepancies between the handwritten recipe and mine.)

A couple of quick comments on the ingredients: Imperial Margarine was my Nana’s preferred brand of margarine.  She would use no other. We used to make the trumpet sound when she would get the box out of the refrigerator. (Ok, so you need to be of a certain age to remember the Imperial Margarine commercials!)

Cinnamon – I tried a new (to me) cinnamon from Penzeys Spices. They make their blend from Chinese, Vietnamese, Korintje and Ceylon cinnamons.  This cinnamon is really good. It smells divine and is great straight out of the bottle.  The cinnamon I usually use is not as sweet and needs sugar when using on an apple or toast.

[BTW … if you don’t care for Rice Krispies, a Graham Cracker crust works perfectly with this recipe too.]

This pie is similar to a cheesecake but really easy to make. I used Cherry Pie filling for this recipe, but any fruit filling or even fresh fruit would be equally as delicious. I hope you enjoy it! 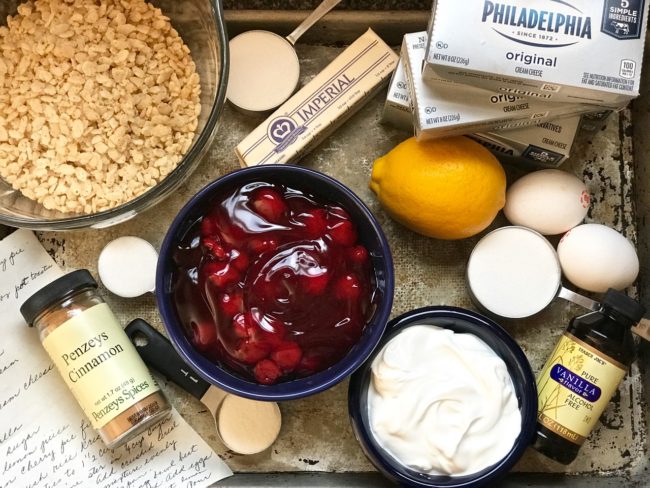 Preheat oven to 350°F. Crush the Rice Krispies to make 1 ½ c. of crumbs (I crushed mine in a blender). Stir in the sugar and cinnamon to combine. Add the melted margarine and stir until well incorporated. Press into the bottom and sides of a 9” deep dish pie plate using your fingers or the bottom of a spoon. Set aside. 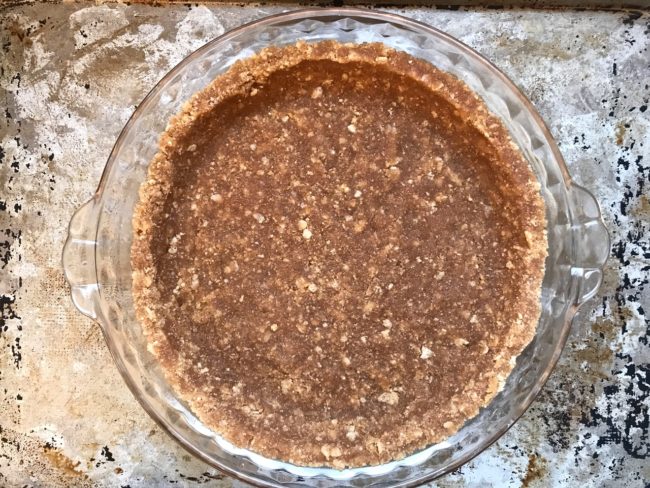 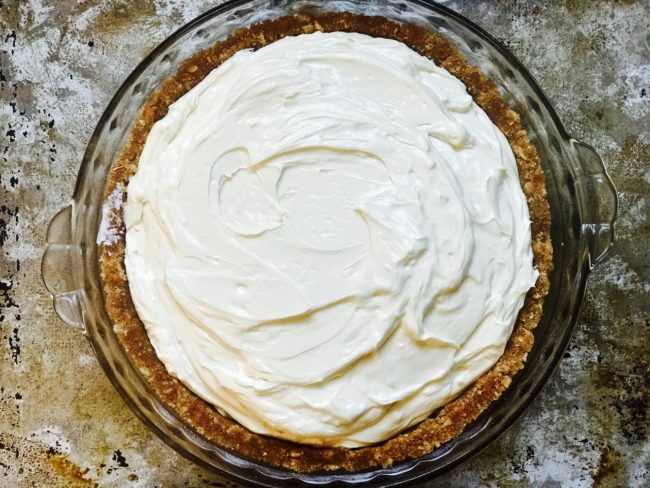 Beat the softened cream cheese with a hand mixer until very smooth, scraping down the sides as you go. Add in the vanilla, sugar and lemon juice and beat until combined. Add the eggs one at a time and mix until just incorporated. Pour the cream cheese mixture into the pie crust and bake until set and the center is just a tad jiggly (35-40 minutes). Let cool on a wire rack for ten minutes. Leave the oven on. 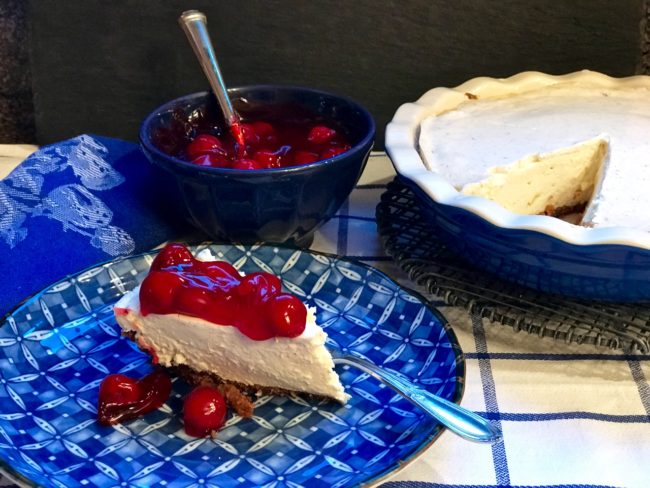 While the pie is cooling, make the sour cream topping and spread on top of the pie. Return to the oven and bake for 5-8 minutes until just set, any longer and it will turn brown. Remove from the oven and let cool completely on a wire rack. Refrigerate until well chilled, about 4 hours or overnight. Spread pie filling over the top and slice to serve. Or, a less messy option is to spoon the pie filling over the slices after cutting. 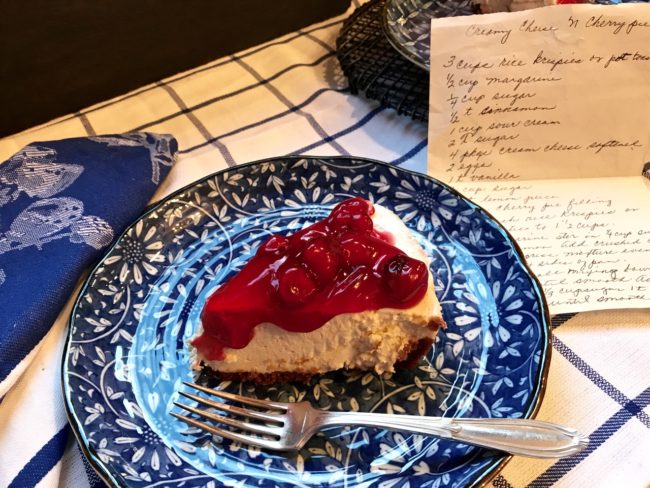 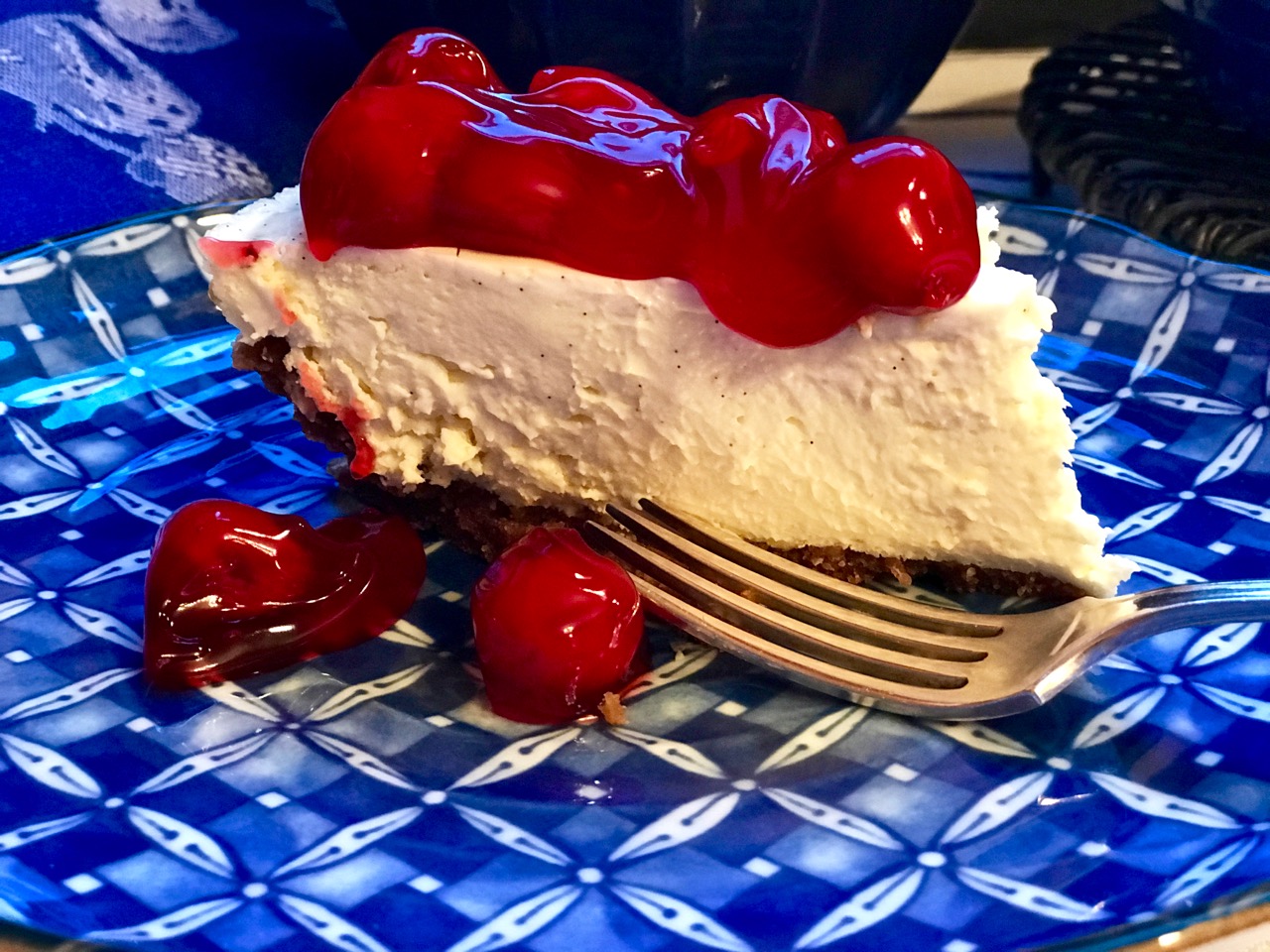