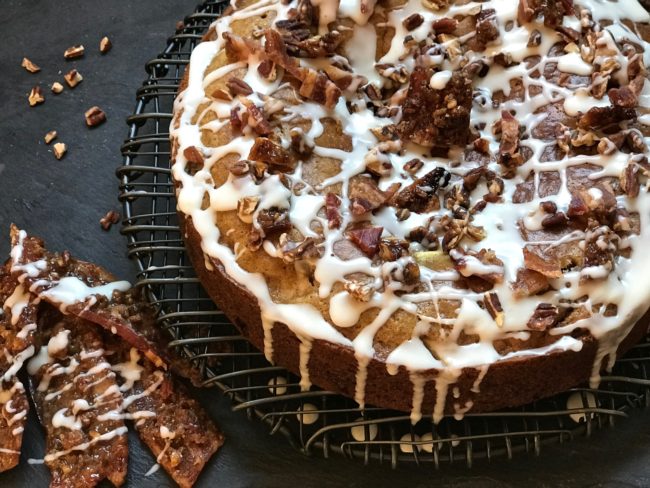 Autumn is taking its sweet time arriving here in lovely Southern California (the hottest opening game in World Series history last week at 103 degrees).  Despite the heat, a few weeks ago my thoughts turned to comfort food and what is more enticing than apples, bacon and coffee cake?  Wow!  Just the title of this recipe had me drooling.

I came across this recipe from Bacon Nation on the Chew and decided to liven things up a tad by caramelizing the bacon ala Barefoot Contessa from Foolproof.  Ina’s recipe is actually for appetizers, but it sounded so delicious I knew it would work perfectly with this coffee cake.  Fortunately, I made the entire package of bacon as some mysteriously disappeared overnight (and I can’t even blame Tom). 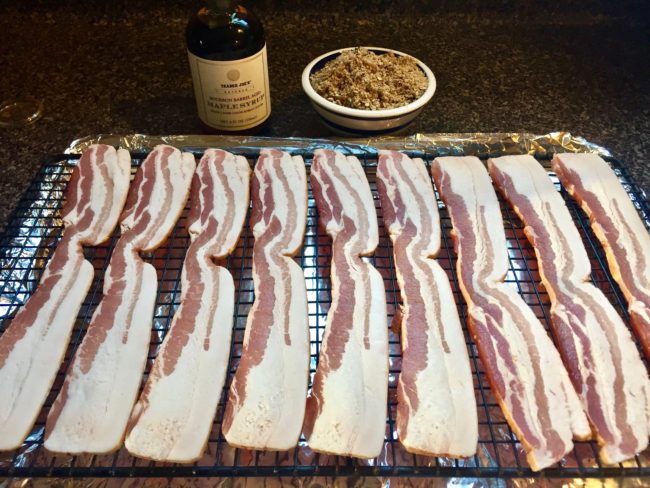 The original recipe called for a Granny Smith apple.  This is not my favorite apple, so I used a crispy sweet-tart Honeycrisp.  In hindsight, I have to say the apple flavor was a tad elusive for me (although Tom disagrees). Of course, maybe it’s just all about the bacon!

As you know by now, I love, love, love Ina’s recipes.  Reading the reviews, I came across a few tips that kind of made sense to me.  The first one was to cook the bacon for about 10 minutes before putting the topping on so that you could get a better crunch on the bacon.  The second suggestion was to drizzle the maple syrup over the bacon after spreading on the dry ingredients rather than trying to spread the mixture onto the bacon slices.  I tried it both ways and … do it Ina’s way!  It looks better, and you get better coverage on the bacon (Ina’s on the right below). 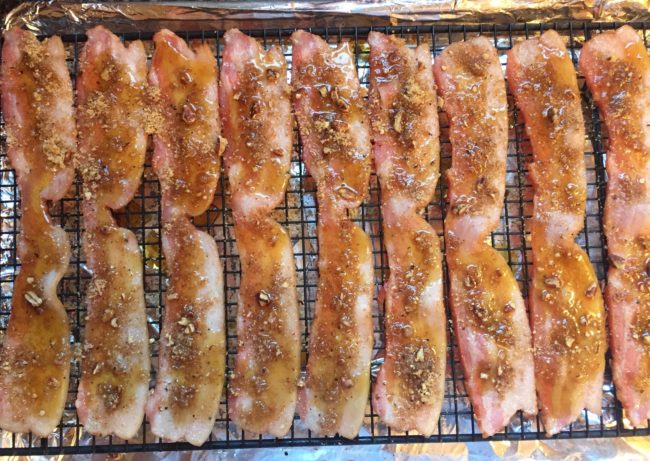 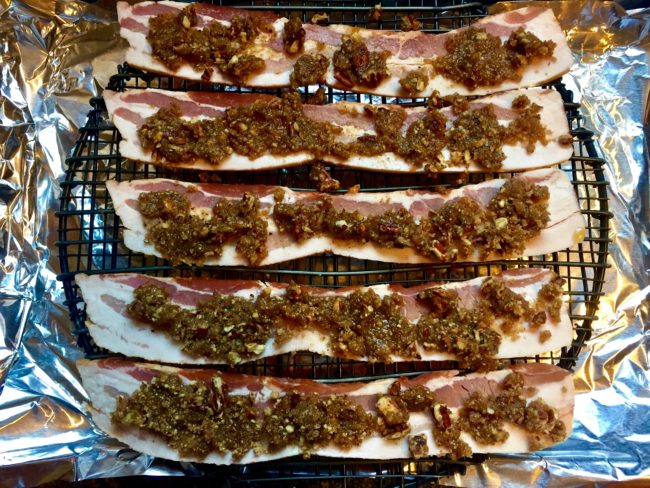 One last suggestion that I agree with is not put the bacon on a paper towel to drain. Otherwise, the maple syrup will cause it to stick to the paper (I left mine on the wire rack to drain and then ran a rubber spatula under the bacon when it came out so it would not stick to the rack).

Quick note on the maple syrup, be sure to use a good quality pure maple syrup to get that great maple flavor.  While perusing the syrup section at Trader Joe’s, I was surprised to see that pure maple syrup is pretty expensive (we usually use sugar-free syrup on pancakes).  However, I spied a new product, Trader Joe’s Reserve Bourbon Barrel Aged Maple Syrup and, while at $9.99 it is still expensive especially as the recipe only calls for two tablespoons, it goes great with this recipe.

Do you have to caramelize the bacon?  Probably not, but that bacon is CRACK!  Also, the bourbon glaze is really tasty, and next time I will double the recipe and cover the cake.

To serve this cake warm out of the oven, you either need to get up really early (not going to happen) or caramelize the bacon the day before.  Of course, then you run the risk of eating all the bacon which is why I used the entire package.  Some for me, some for Tom, some for the cake. Enjoy! 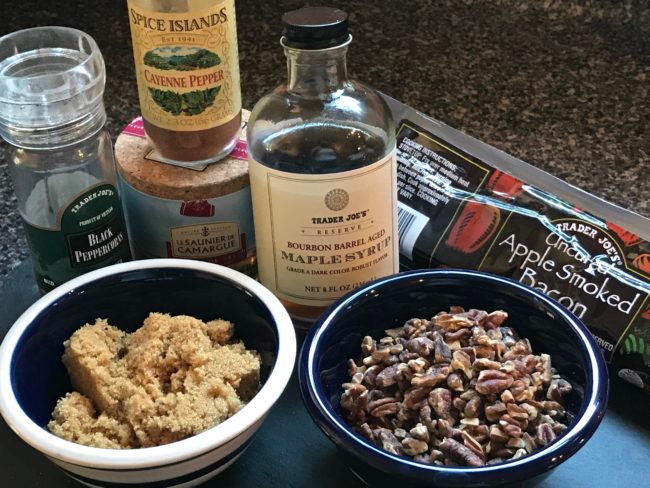 Preheat oven to 375°F.  Line a rimmed sheet pan with foil for easy cleanup and top with wire baking rack.  Combine all the dry ingredients in food processor (I used my blender) until the pecans are finely ground.  Mix in maple syrup to form a paste.

Line the bacon slices on the wire rack without touching.  With a small spoon or your fingers, evenly spread the paste on top of the bacon.  Bake for 25-30 minutes until the topping is very browned.  (If you are making this as an appetizer, do not undercook the bacon otherwise it won’t crisp when it cools.)  Crumble up five of the least crunchy slices for the coffee cake batter and reserve two crunchier pieces for the topping. 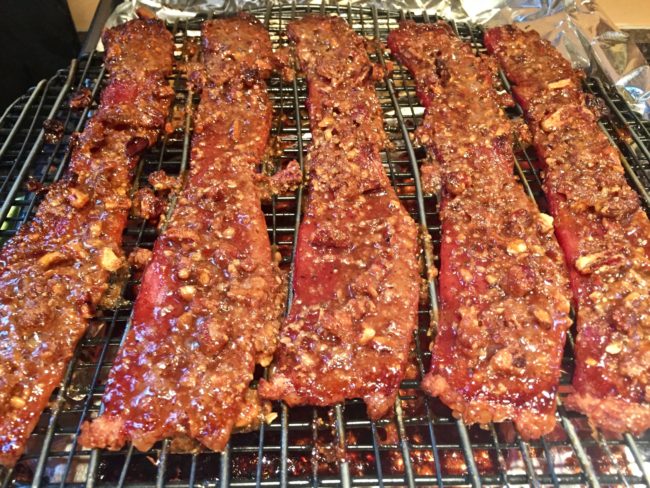 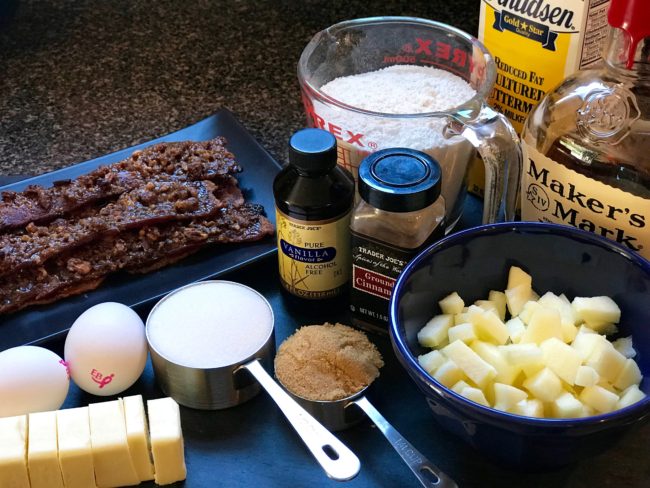 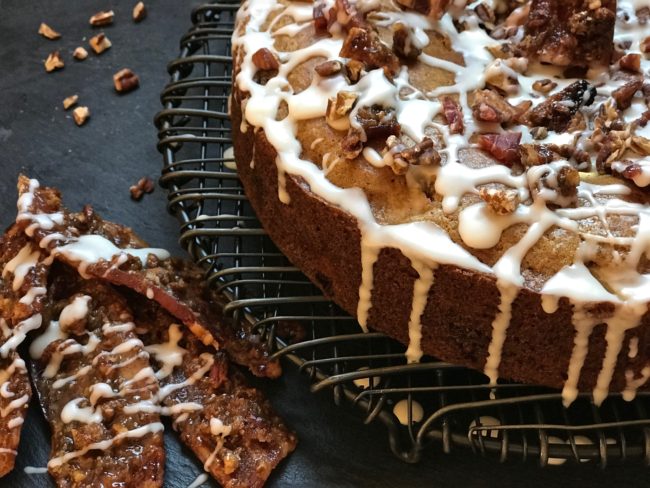 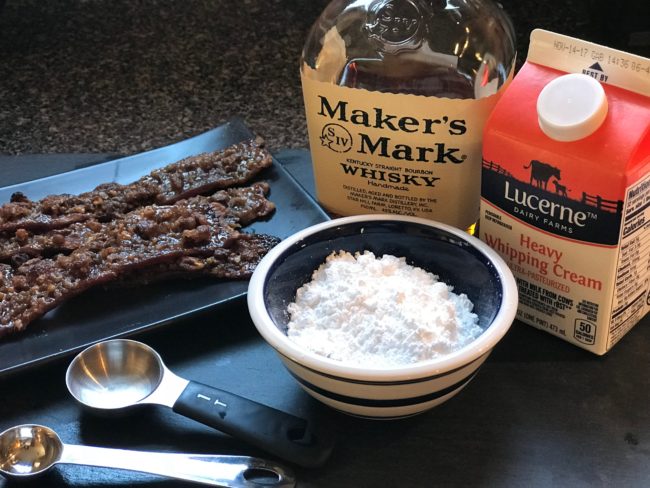 Preheat oven to 350°F.  Butter a 9-inch square or round baking pan and dust with flour; or make it easy and spray with bakers’ spray.

If you are not caramelizing the bacon first, then cook it in a skillet until lightly browned and most of the fat is rendered.  You do not want it too crunchy.  Transfer to a paper towel-lined plate to cool and drain.  Crumble the bacon.

Whisk the flour, baking soda, cinnamon, and salt to combine in a mixing bowl and set aside.  Combine the butter and sugars in a large mixing bowl until creamed.  Add the eggs, 1 T. bourbon and extract to creamed mixture and beat on medium speed until well combined.  Add the buttermilk and beat until well blended.  Add the dry ingredients all at once beating on low speed until just incorporated.  Stir in the apple and 5 pieces of crumbled bacon. 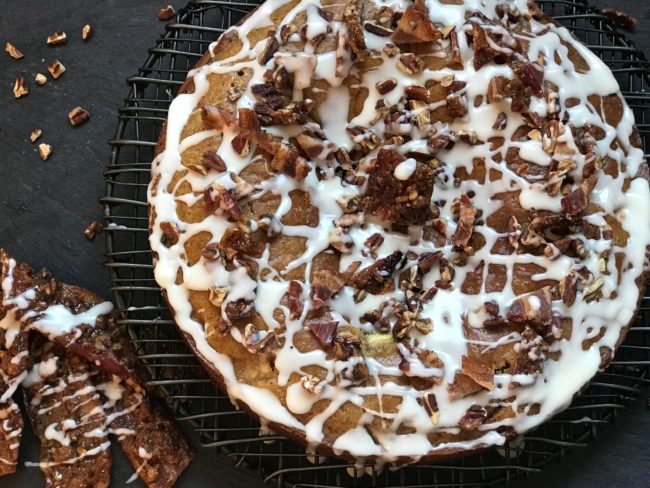 Pour the batter into your prepared baking pan.  Bake until a cake tester inserted in the middle comes out clean (35-40 minutes).  Transfer cake to wire rack and let cool for 10 minutes.  Remove from pan and let cool to room temperature before glazing.

To make the glaze:  Combine powdered sugar, cream and bourbon in a small mixing bowl and whisk until smooth.  Sprinkle the toasted pecans and crumbled bacon over top of the cake.  Using a spoon, drizzle the glaze back and forth over the bacon and pecans.  Let glaze set for about 30 minutes before cutting the cake.

Grab a cup of coffee (bourbon optional), and enjoy your morning! 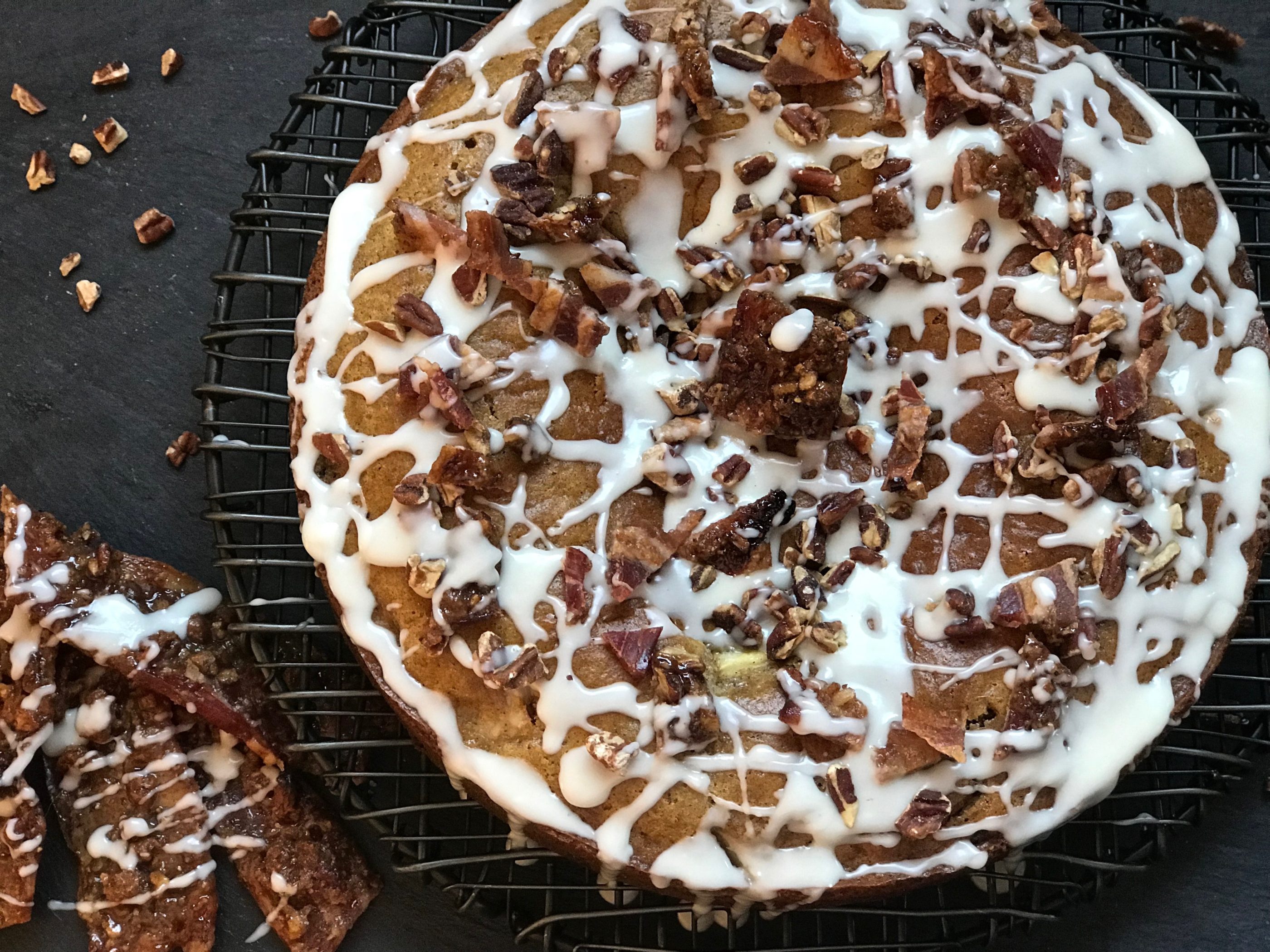