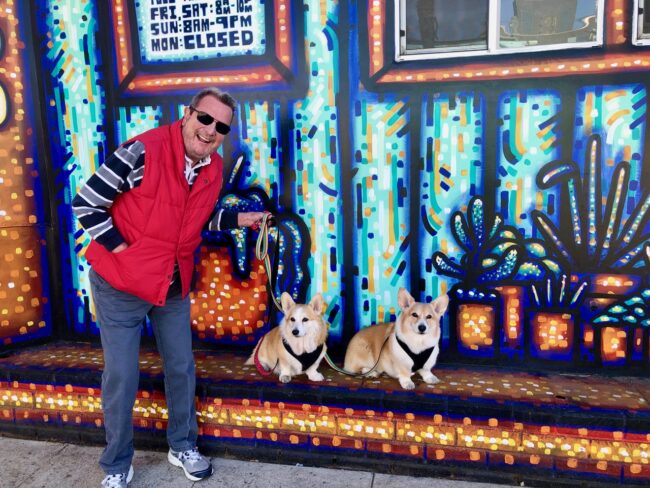 Being a native Angeleno I thought I knew just about every nook and cranny of the city, but while walking the dogs, a neighbor told us about having a great breakfast at a place called Spoke Bicycle cafe in “Frogtown.” I was perplexed. Google, being one of my best friends, became the source of some riveting information about this area.

True to its name, Frogtown (its official name is Elysian Valley) is a neighborhood adjacent to the Los Angeles River (yes, we have a river here), which received its name because frogs would congregate near the river on the grass banks.  It was a rough neighborhood for years.  Gangs in the area took the Frogtown name, which is never good for business.  As a matter of fact, in a 2014 LA WEEKLY article, one local taco stand owner said, “Ten, 15 years ago there was a shootout every weekend, The bullets would fly right past me, right into the walls of the house.”

However, since this part of town is located near downtown Los Angeles, it would only be a matter of time before gentrification would come this way.  (So gentrified, that a condo project going up next to Spoke has a sign that says, “STARTING at $800,000”).

Over the past few years, Frogtown has seen a river adjacent park renovation (the kids made a quick stop)… 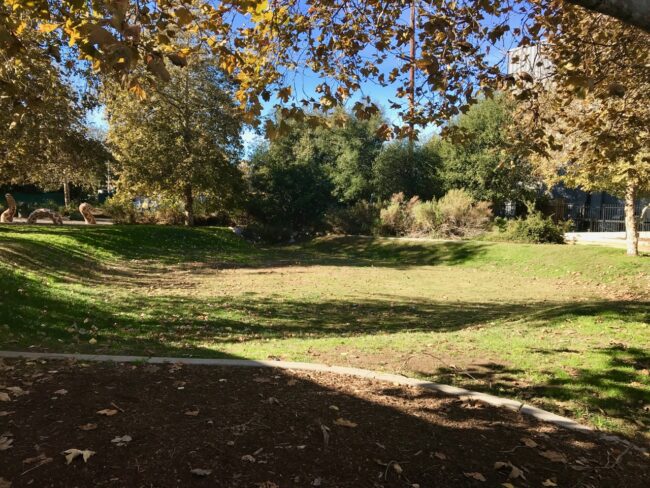 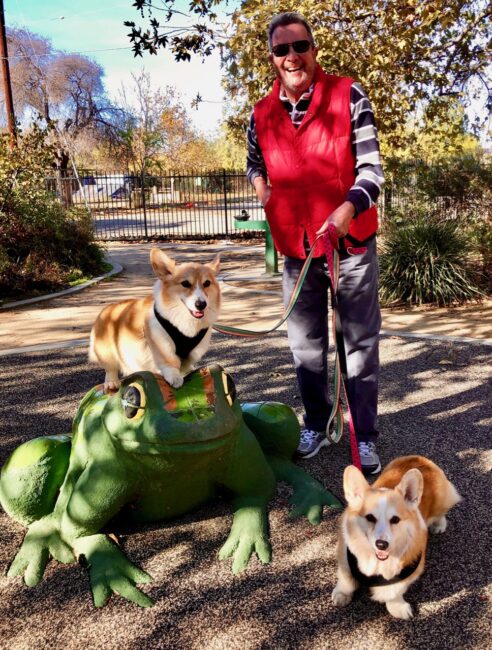 … and an extension of the northern section of the Los Angeles River Bike Path, which runs adjacent to Spoke Bicycle Cafe. 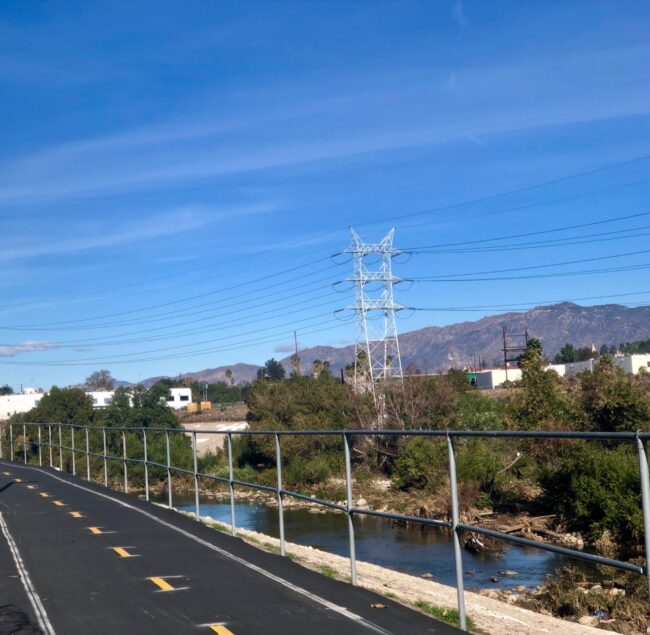 Tracy and I, along with corgis Frankie and Remi, decided to try out Spoke one Sunday morning (the dogs are always up for a new adventure).   We drove the streets of Frogtown with its small houses and found parking on the street near the restaurant and walked into the patio dining area. 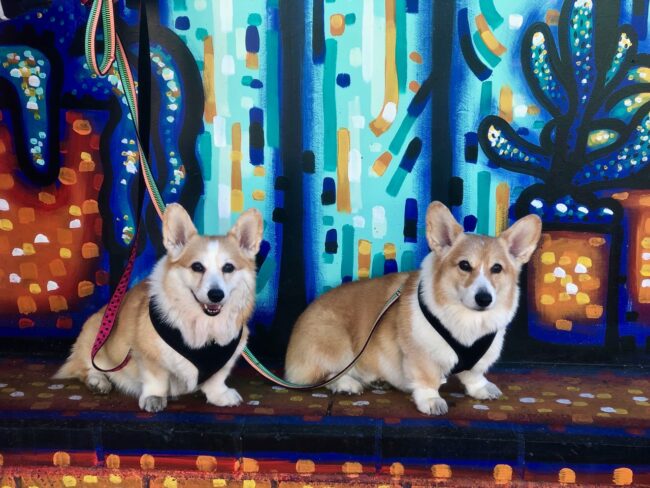 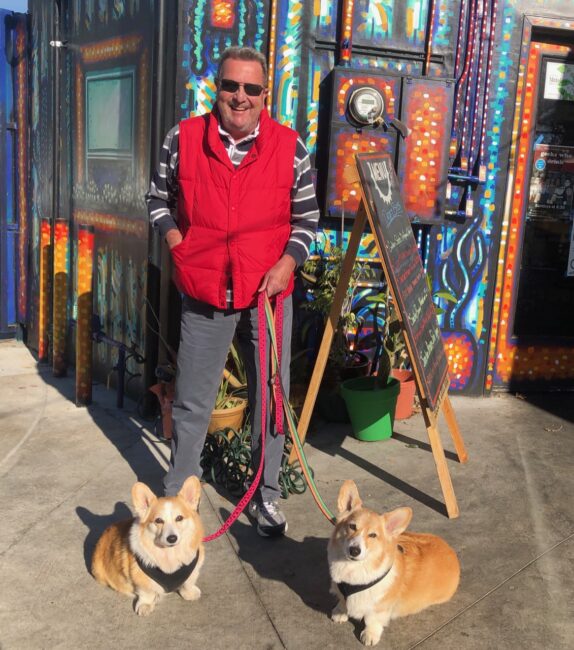 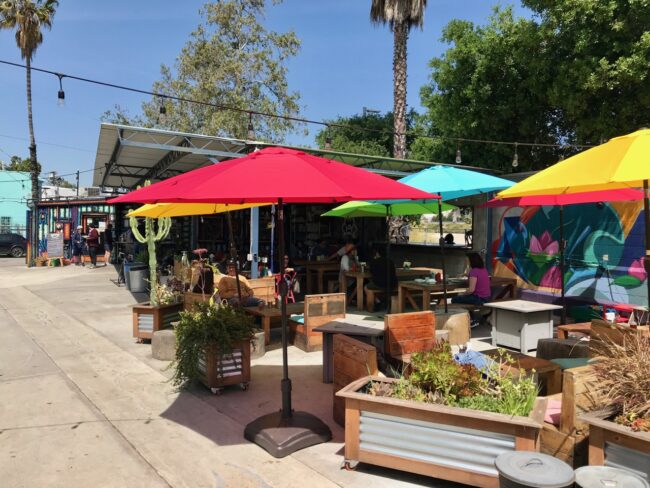 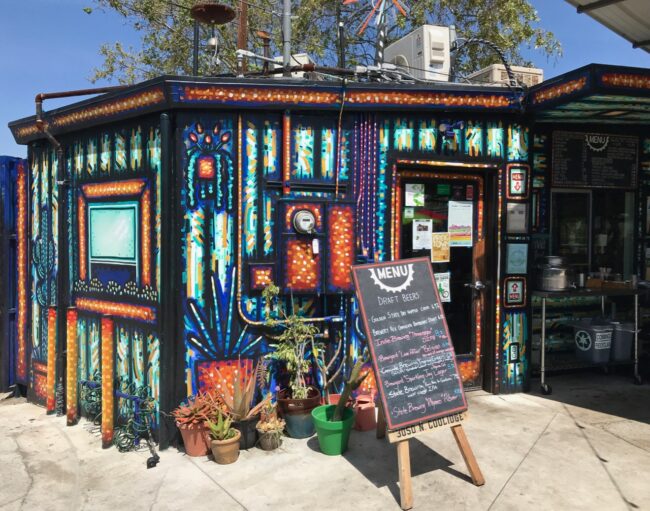 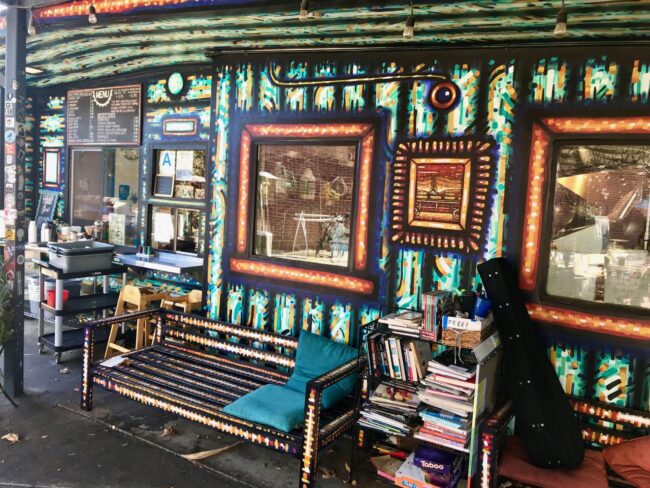 When Spoke opened in 2015, it was a combination bike shop and spot to get some coffee or other beverages. 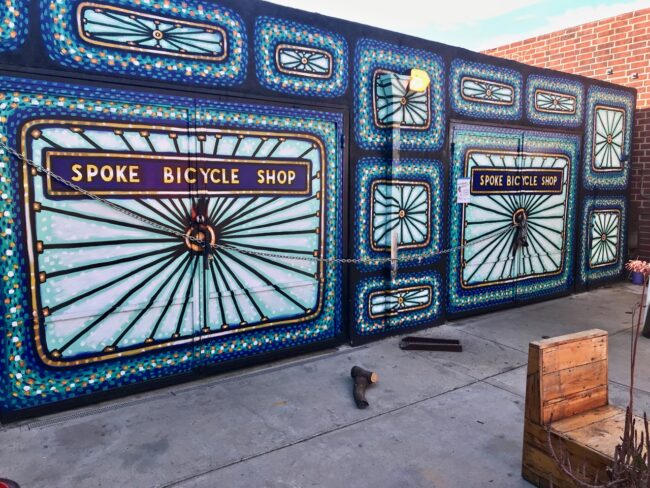 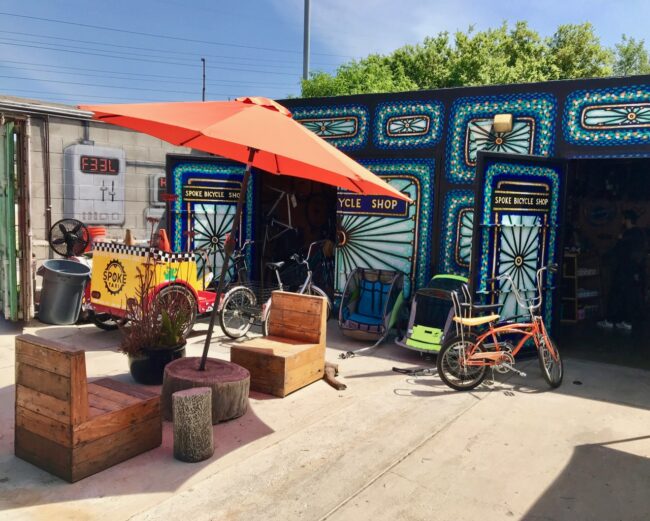 However, in 2017 the eatery upped its game and now serves a killer breakfast and lunch.  We know that because we have eaten here a couple of times since our initial visit.

You order your food inside, are given a number for your table, and the food is brought out to you.  And so far, the food we have had here is very, very good. 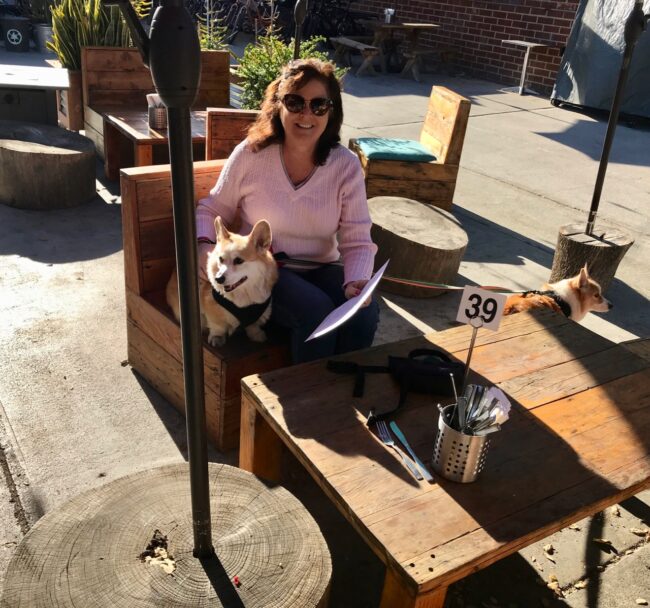 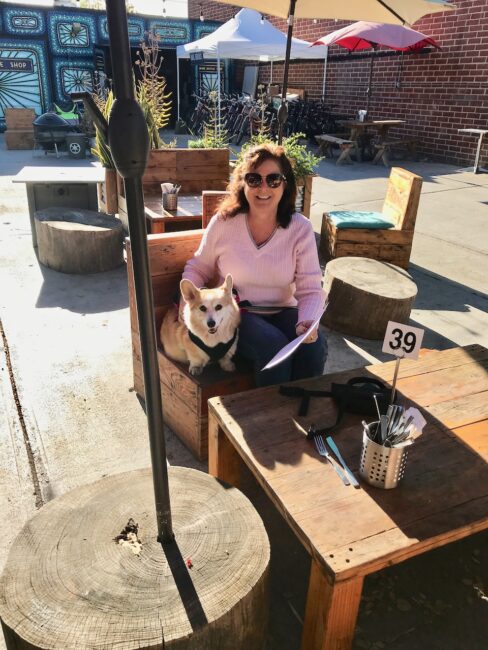 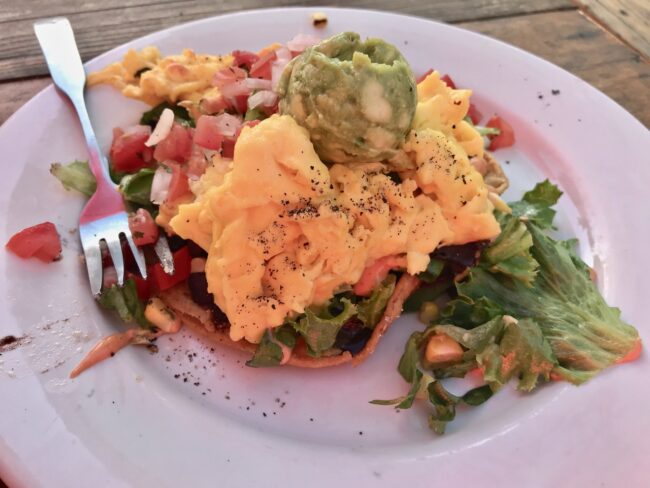 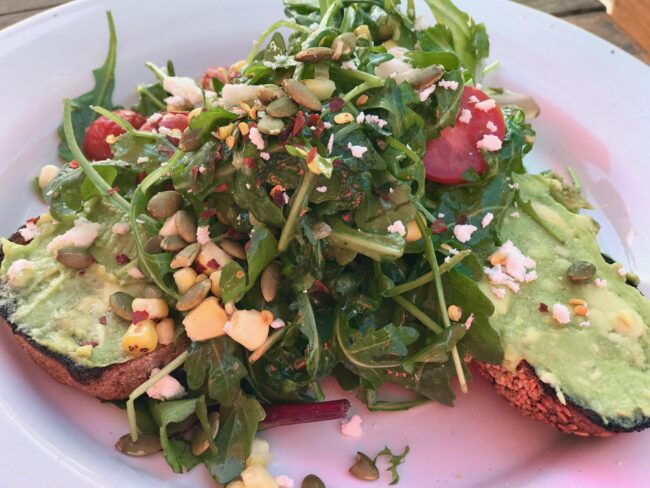 The incredible bread is from Bub & Grandma’s which makes bread for many of our favorite restaurants in LA.

We started our morning with a slice of the blueberry pie, which was pretty tasty too.  I am sometimes amazed at the quantity of food we eat.  Then again, looking at recent photos, maybe not. 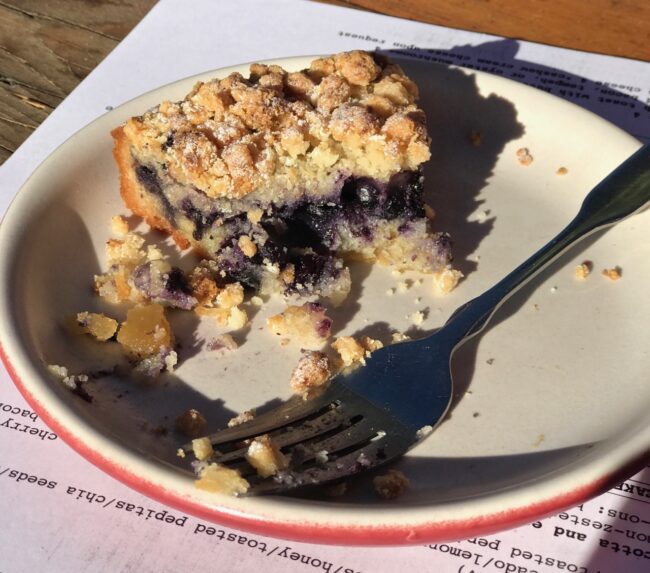 On our second trip to Spoke, we went for lunch.  I ordered the Grilled Cheese sandwich with bacon and waffle fries; aged cheddar, provolone, and roasted tomato chutney grilled on toasty sourdough ($8.50).  Add-ons included bacon (which I ordered) or tempeh ($3.50). 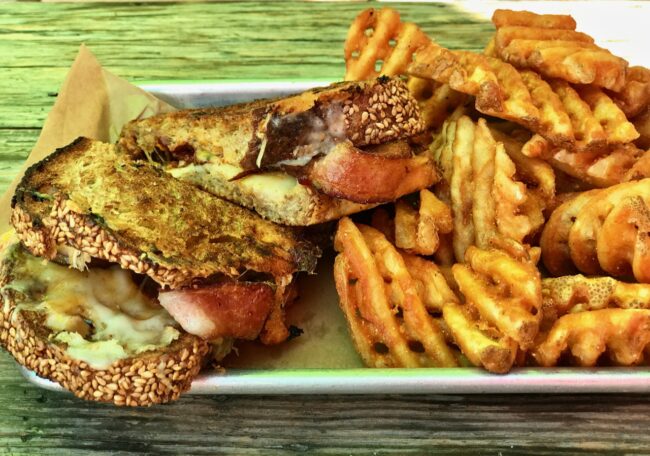 The only other grilled cheese sandwich I had ever tasted that was comparable was the Cheese Toastie at Kappacasein Dairy in London’s Borough Market (photo below).  Tracy makes a killer copycat Cheese Toastie (recipe here). 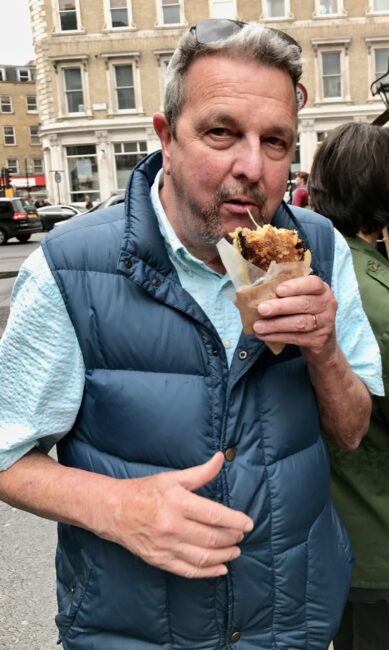 Oh, and the waffle fries were out of this world.  Frankie and Remi gave them eight paws up! 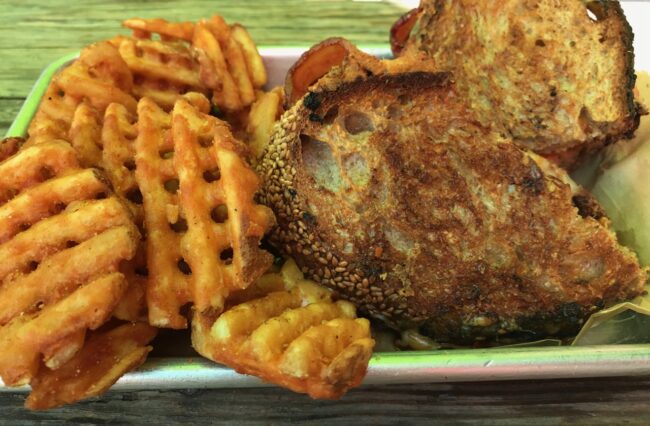 Recently we popped in for breakfast with friends Kim and Mary, along with their dog Fenway (that’s him below asking for one of Mary’s waffle fries … the corgis had called him).  For decibel concerns, the corgis stayed home on this trip.  We brought them back some waffle fries. 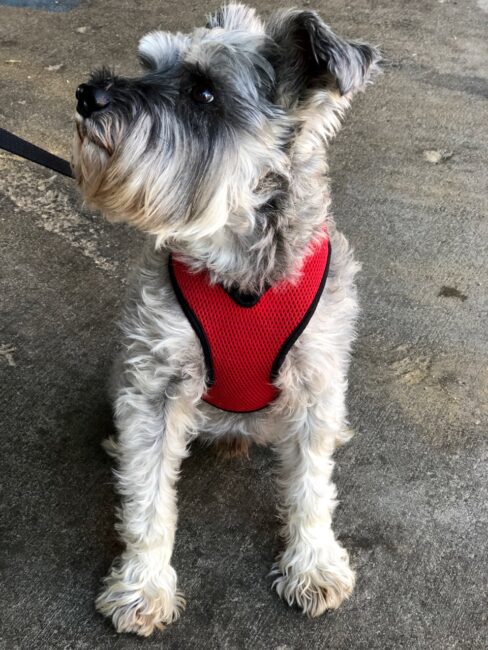 I tried the Breakfast Bun; soft-scrambled egg, bacon or tempeh (I chose bacon), cheese, caramelized onions, and special sauce on a griddled soft bun (($8).  I thought it looked small at first, but it certainly filled me up.  Lots of perfectly scrambled eggs inside.   Of course, being the glutton I am, I also ordered a side of their delicious crispy potatoes ($3), which are roasted rosemary potatoes. 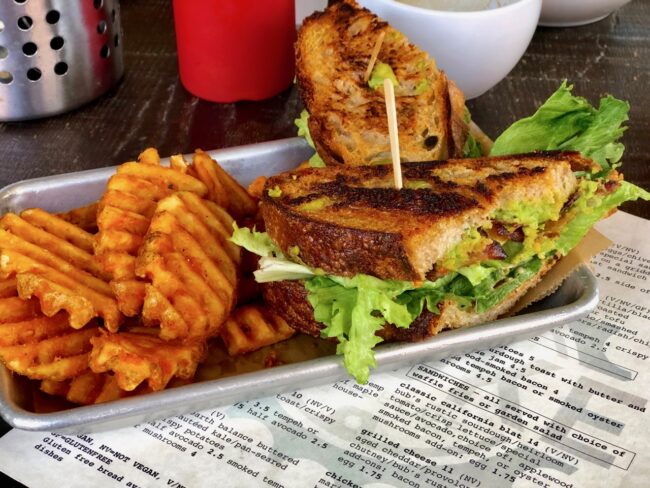 Mary devoured the grilled cheese sandwich, while Kim ordered scrambled eggs, toast, and potatoes; two eggs, buttered rustic sourdough toast, and crispy potatoes ($10).  Spoke serves breakfast all day and also has a great selection of sandwiches, salads, bowls, and many vegan options.  The hamburger looked great, and I’ll add thoughts on that to this post at a later date (probably soon).

If you are not biking, there is limited street parking but check signs for street cleaning day. 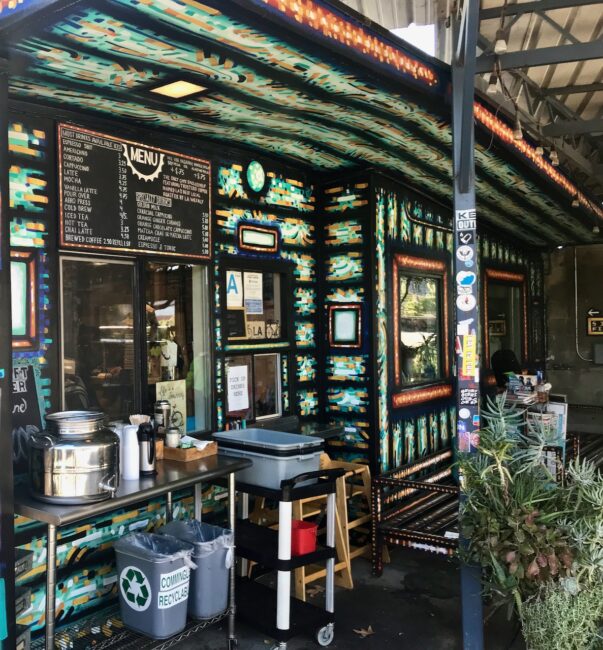 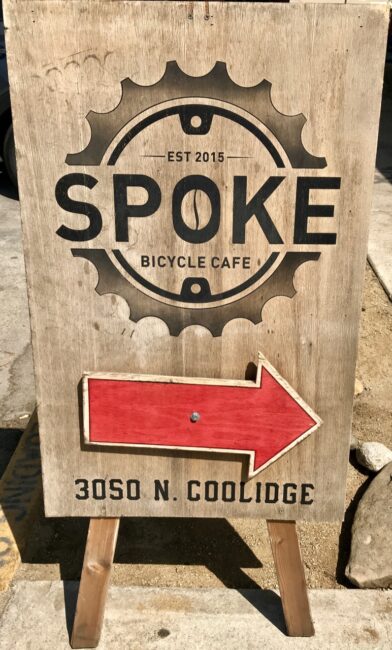 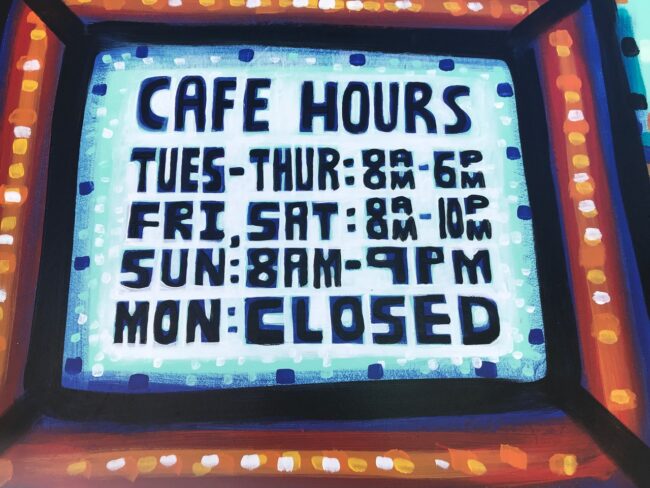 Note:  Although dogs are allowed on the bike path, we don’t feel very safe with the bikes whizzing by, as there is not much room to move off to the side of the way, so we didn’t walk any further.   Instead, we sometimes pop over to nearby Griffith Park and walk the three-mile path around the golf course instead (park at the Crystal Springs Picnic area or the other end at the Autry Museum). 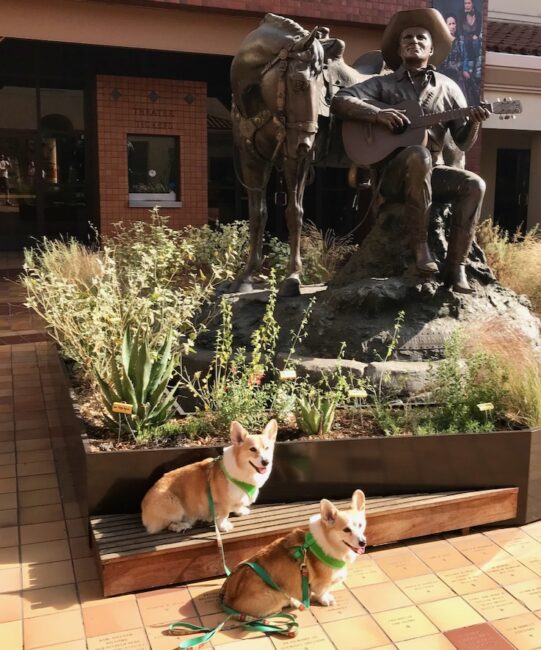 Spoke Bicycle Cafe has now become one of our favorite breakfast and lunch stops in L.A. (stay tuned for more of them in a new section we are creating).  The food is fresh, and every dish has been a winner.

I like it so much that I believe I should become their Spoke(s) man!  So put your pedal to the metal and get down to Spoke Bicycle Cafe. 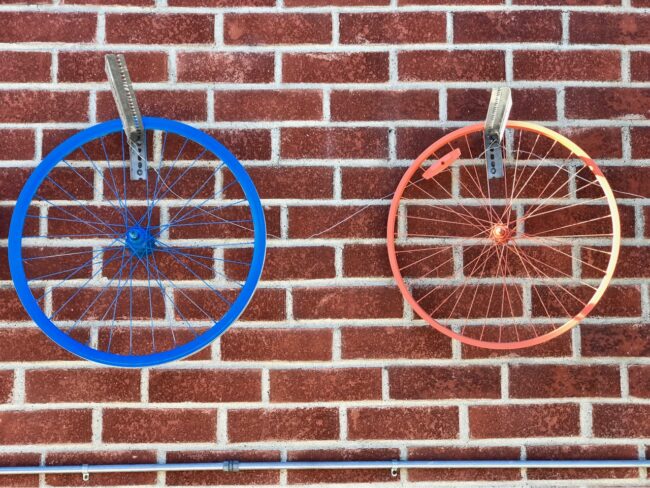