Hip To Be Square 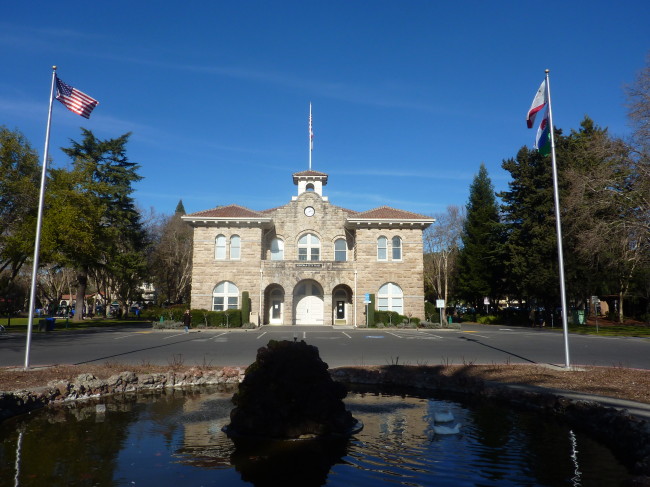 Always a nice stop for an hour or two when in the area, the Sonoma Square (or Plaza) is an eight-acre National Historic Monument.  It was designed 170 years ago by the Mexican Governor at the time, Mariano Vallejo. 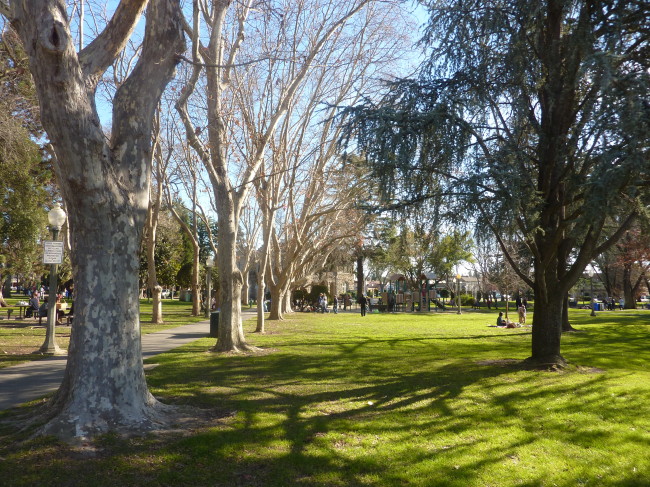 The park has beautiful trees and pedestrian paths. It’s a great place to picnic or just spend some leisurely time doing absolutely nothing.  At its center is the Sonoma City Hall. I t was dedicated in 1908, and is in the center of the plaza.

Originally, it was designed with four identical facades so that merchants from any side of the square could say the City Hall faced their businesses. It was constructed from basalt stone that came from local quarries. The City of Sonoma government offices remain today. 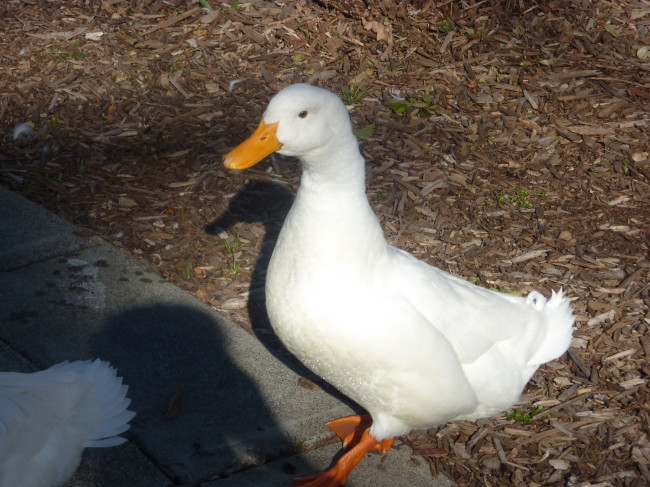 You might even run into a friendly duck in the pond in front of City Hall. 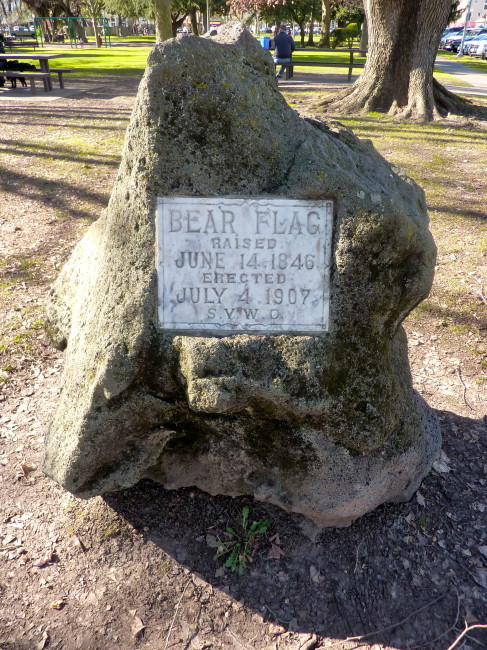 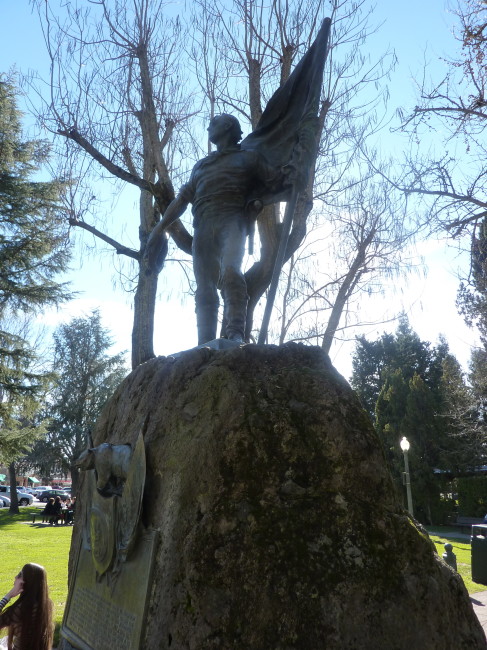 You will see a large monument in the plaza. The Bear Flag Monument commemorates the raising of the Bear Flag on this spot June 14, 1846, by the Bear Flag Party declaring freedom of California from Mexican rule on July 9, 1846.

General Vallejo was imprisoned during the Bear Flag Revolt, and he later transferred his allegiance to the U.S. and endorsed California statehood (1850). 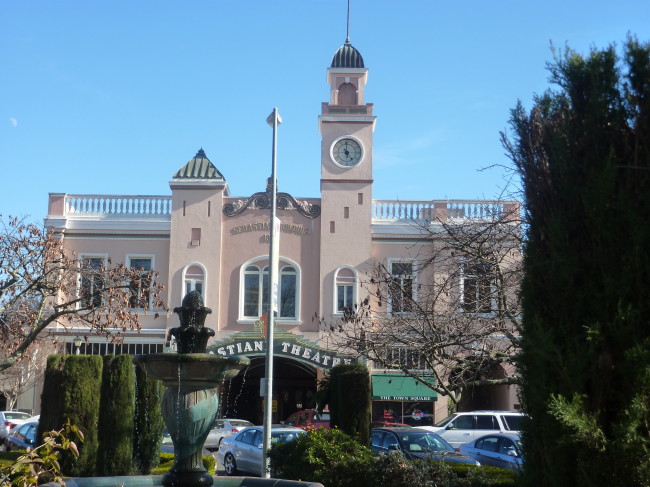 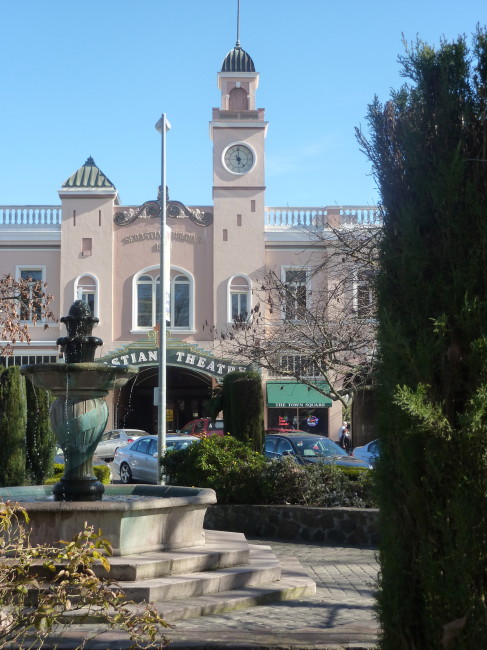 Surrounding the plaza are a number of shops, restaurants and other places of note, such as the Sebastiani Theater that dates back to 1933.

Located across the street from the Sonoma Plaza is the Sonoma Barracks. This two-story, wide-balconied, adobe barracks was built to house Mexican army troops under the command of General Vallejo. 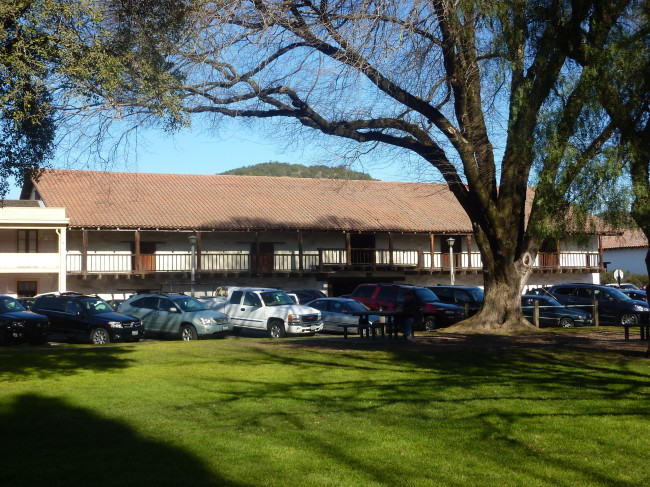 It was used from 1834-1846. You can go to the Mission San Francisco de Solano across the street (see my description of the mission under “Mission Possible”) and purchase a ticket that gives you entry to the barracks, too, which is what we did.  With that receipt you can also visit the nearby Lachryma Montis (the Estate of General Mariano Guadalupe Vallejo…see my report on this in California Drive-By). 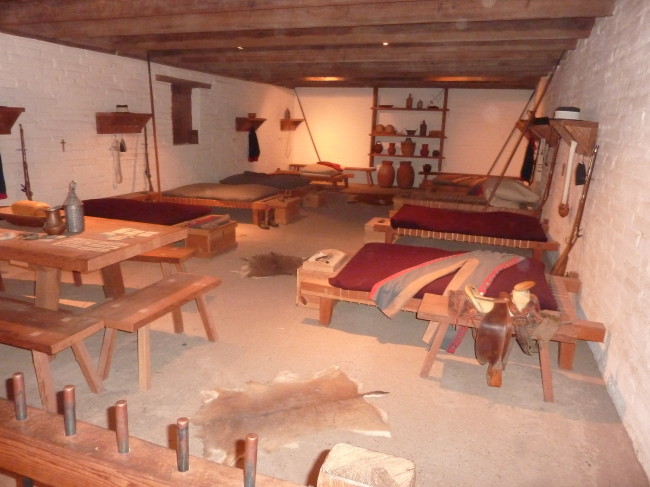 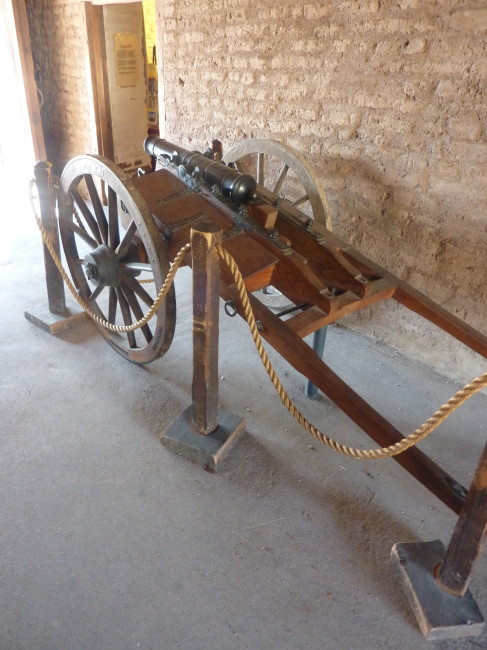 We walked around the barracks for a short while and went into the back courtyard. 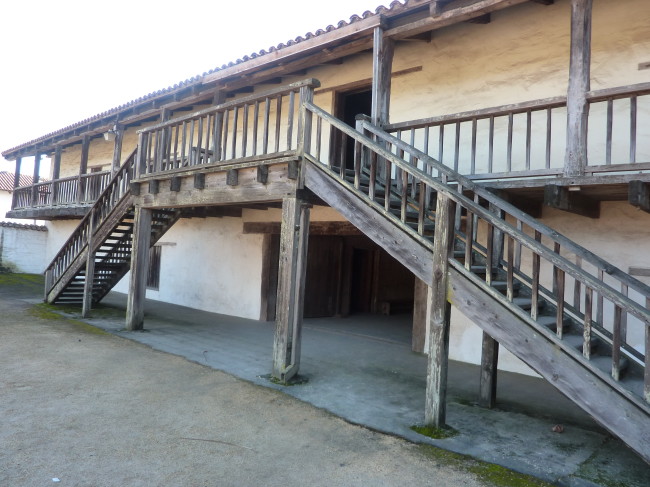 Tracy even met a friend. 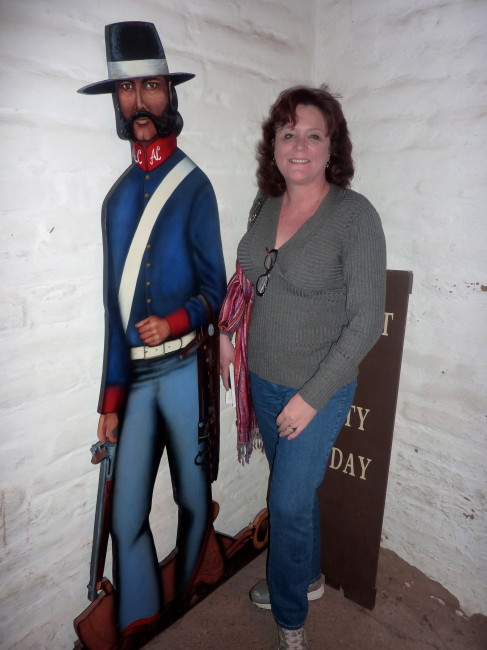 Getting hungry, we visited our favorite place across from Sonoma Plaza…the Sonoma Cheese Factory, which started way back in 1931. 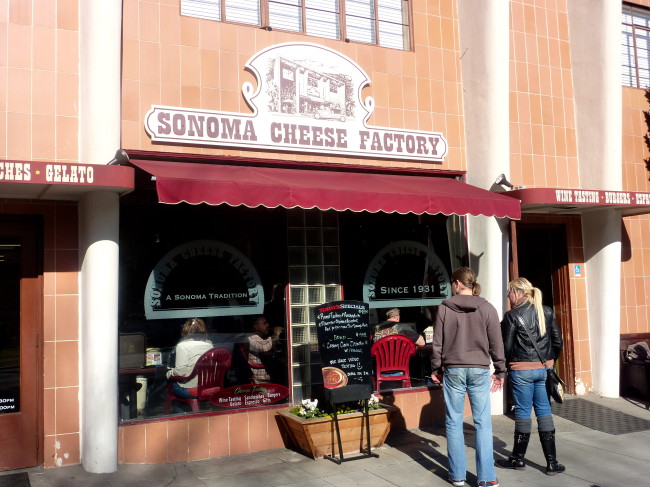 If you can’t find a cheese you want here, you won’t find it anywhere. 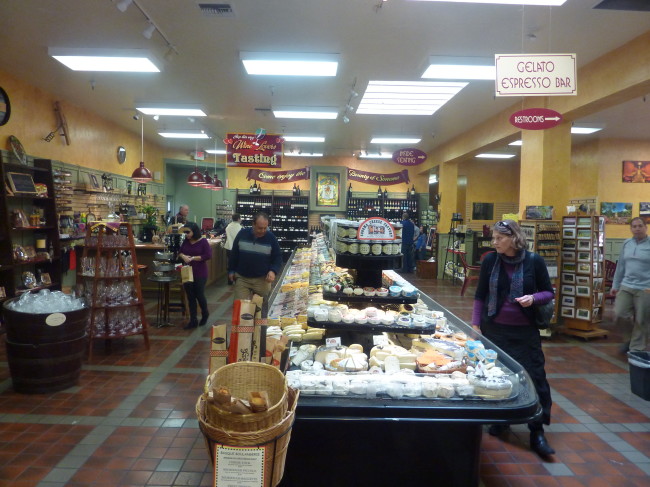 I’m partial to the Hot Habanero.  You can also purchase wine, gelato and a plethora of other food items and gifts. 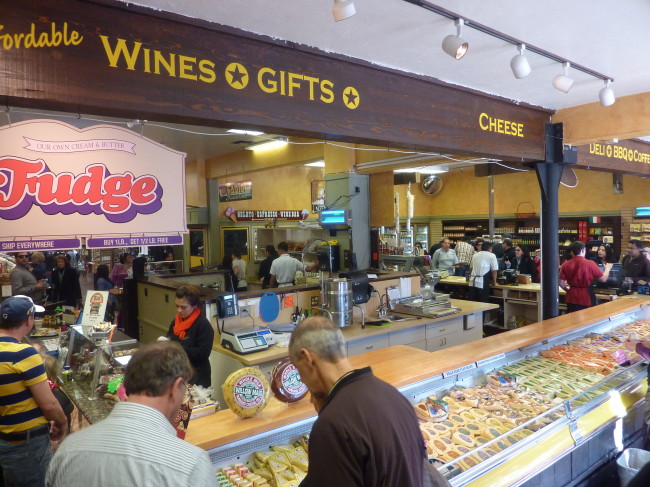 We were more interested in lunch and had a great barbecued tri-tip sandwich, cooked out on the patio. 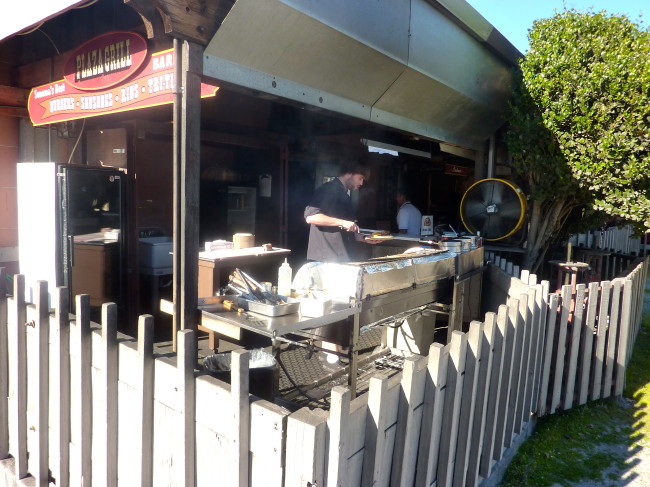 Before departing the Sonoma Plaza, we walked by the famed Swiss Hotel. 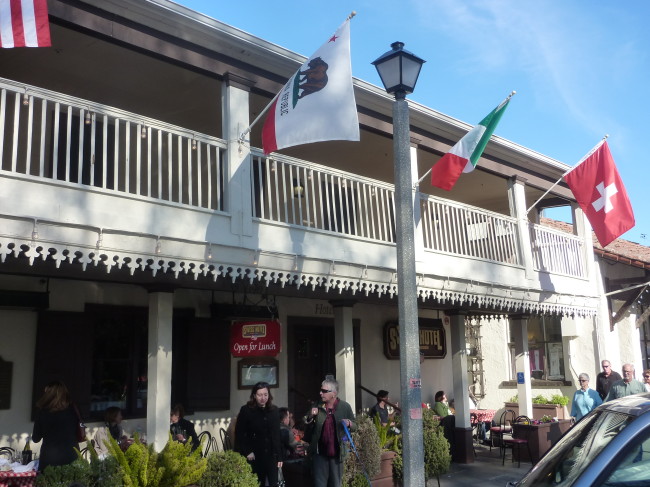 From its website: “Between 1836 and 1840, the General’s Brother, Don Salvador Vallejo, built his family home in the middle of the block on the north side of the Plaza. That beautiful adobe structure still stands today. As a hotel, the home is said to have served as a stagecoach stop in the 1870’s. In 1892 it was acquired by the Toroni family and run as the Ticino Hotel, serving railroad passengers and employees who stopped in Sonoma to spend the night. When another hotel on the west side of the Plaza burned to the ground, the Toronis simply took its name for their own, and to this day the Vallejo home is known as the Swiss Hotel.” 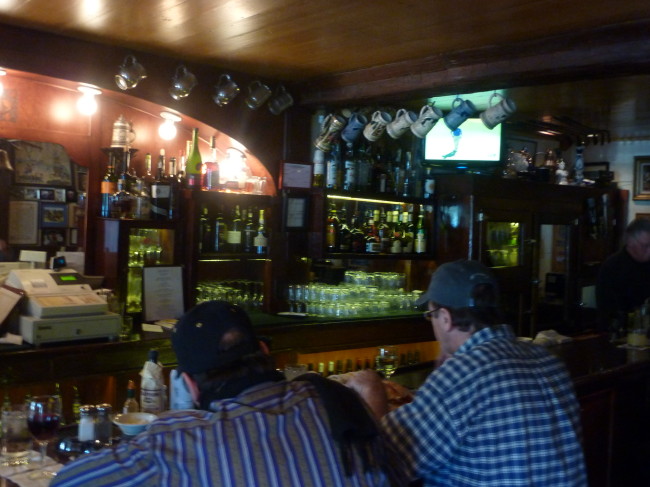 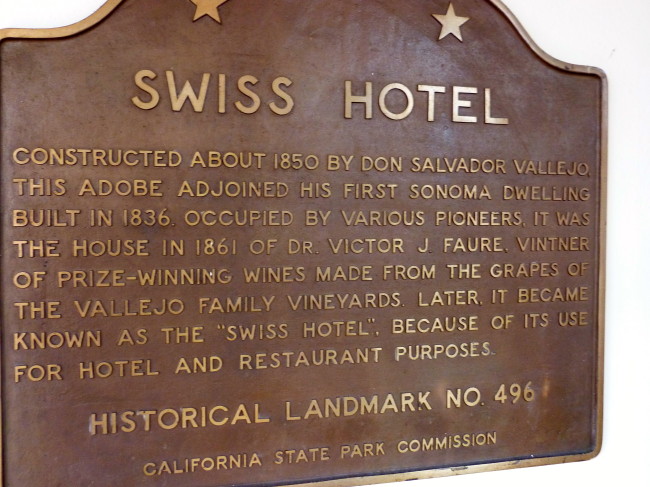 We have eaten here before and had cocktails in its bar. 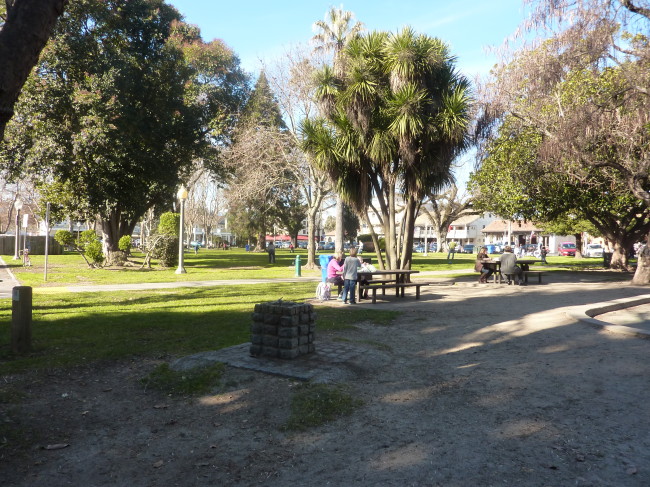 When in the area wine tasting, take a little detour to downtown Sonoma and visit the Sonoma Plaza. It will be worth your time.