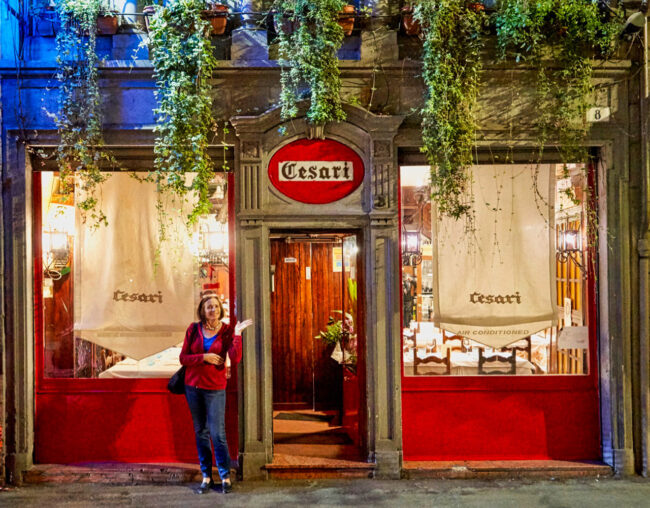 Before we had left for our big trip to Italy, I had booked a reservation online for Ristorante Da Cesari, a restaurant I really wanted to visit. I made a great choice.  On our first night in one of the premier cuisine capitals of the world, we strolled from our lodging near Piazza Maggiore … 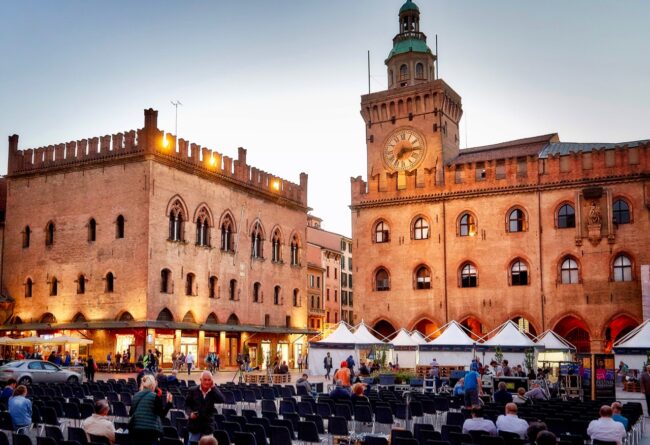 … to an establishment that started out in the 20th century as an Osteria and wine retailer. It was a fantastic choice for our first evening in Bologna.

Not surprisingly, although we had 8 p.m. reservations, the four of us (Tracy and I, plus friends Kim & Mary) arrived early (these 10-mile plus walking days make a person quite hungry), securing the window table affording a view of the entire restaurant, which was still quiet. 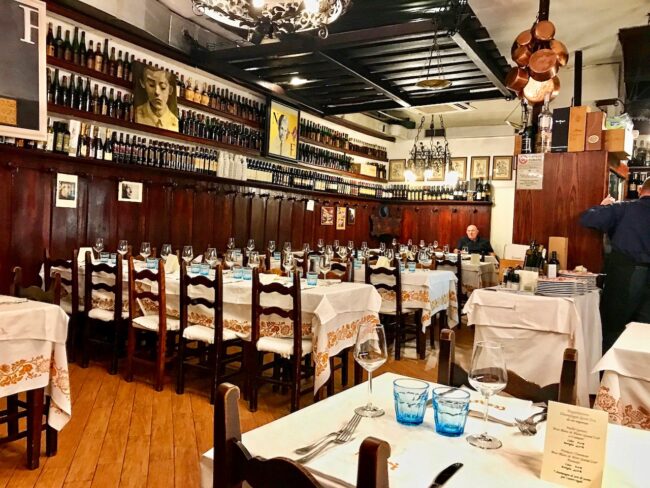 It wasn’t for long.  People probably saw us at our window seat, and knowing our impeccable dining choices, rushed in.  Actually, this is a place you should really reserve in advance.  Many people were sadly turned away at the door. 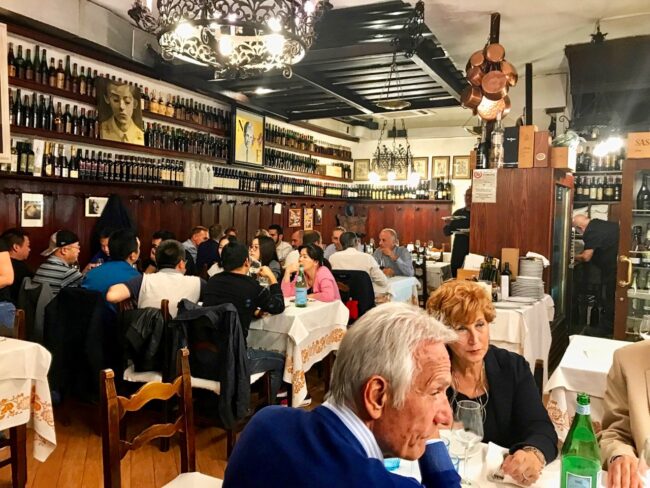 Da Cesari is truly a family affair. It was started by our server’s grandparents 65 years ago. We learned that it originally opened at 6 p.m. and only served one pasta and one crostini. They served 100 patrons every two hours.  For some reason Ricardo (our server) reminded me a little of Curly from The Three Stooges, and he was hilarious.  He spent a great deal of time talking about the restaurant and his family. Ricardo previously worked for his uncle Umberto Cesari of Momo wines as a traveling wine distributor.  He spent 260 days a year on the road until one day his 3-year old daughter told her nursery school class that her dad “drank wine all day.”  By the way, we loved the Momo Rubicone blend (Sangiovese, Cabernet and Merlot), which is available in the U.S.

Heeding Ricardo’s story, Mary and I started off with the first pasta dish Da Cesari’s ever served: Gramignone verde al ragù di salsiccia (spinach pasta with ragú. Once again … the simplest of dishes make for some of the best ones. 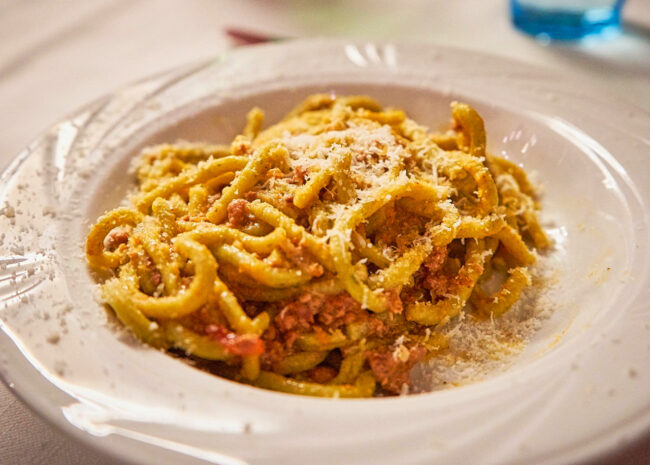 I must say I was hesitant to order the steak with balsamico, as I have not had much luck with beef in Italy on our numerous trips, but Ricardo gave it a thumbs up, and I’m sure he wouldn’t lie to me. He didn’t. It was hands down the best steak I’ve ever tasted in Italy on all our journeys.

By now the place was packed and noisy, but a jovial noise with patrons all having a great time in this old-school atmosphere. Laughter and conviviality filled the room, as Da Cesaris’ delicious cuisine filled my stomach.

Kim started off with Tortellini en brodo di manzo (in beef broth) and followed that up with Scaloppa di vitello alla “Petroniana” con patate al forno (veal escalope with Parma ham, cheese and roasted potatoes).  Oh man, what a great sauce, and the veal was pounded as thin as the ham and cheese slices. 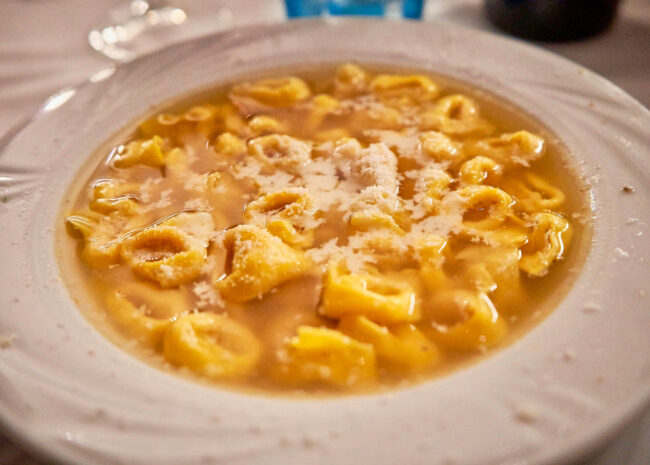 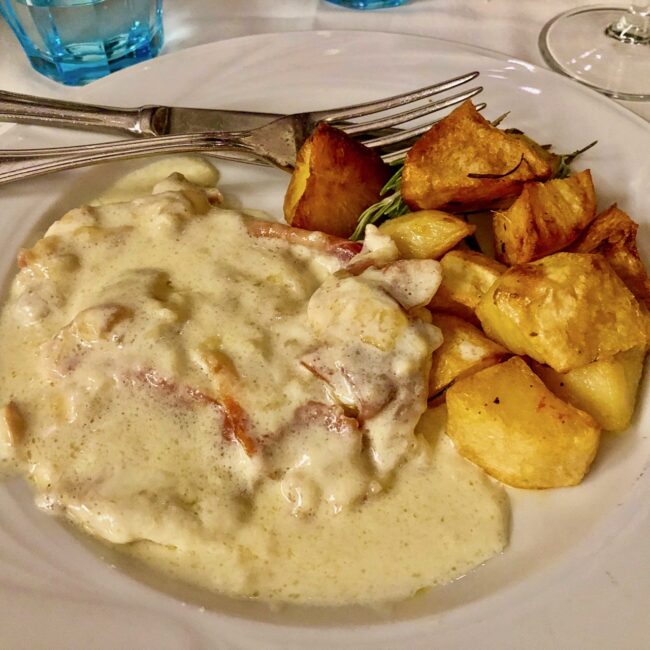 When Tracy said she was going to have a dish made with burro, I told her not to make “an ass of herself,” not knowing that burro in Italian is butter. Tracy started with a “Wow” Ravioli di zucca al burro fuso e parmigiano (Ravioli stuffed with pumpkin, served with butter and Parmigiano cheese) and then the Scaloppa di vitello. 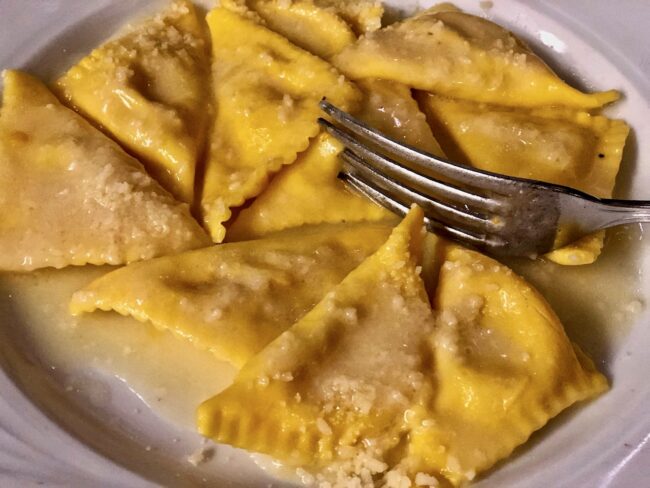 With a couple of bottles of wine the bill came to €78.50 a couple. Another bargain. 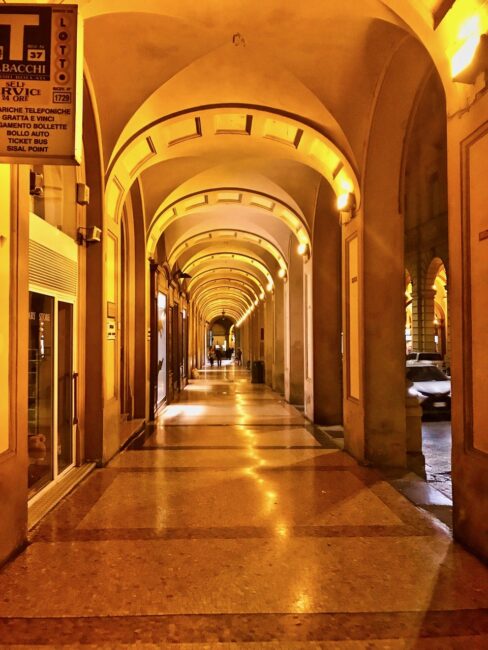 We bid “buona notte” to the affable Ricardo and made our way back to our apartment strolling under one of the many gorgeous Bologna porticos.

Bologna is a wonderful town for numerous reasons, food being right near the top of them. Da Cesari proved to live up and exceed our expectations on our first night here. Make reservations before you leave for your trip and prepare for a delicious, and fun, evening in bella Bologna at Da Cesari.