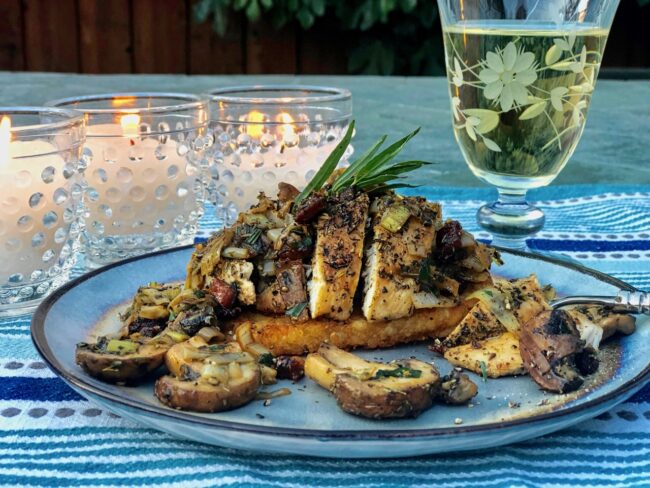 Pan-Roasted Chicken with Pancetta, Mushroom & Leek Sauce on a Bed of Hash Browns

Tom once again returned from an event at Melissa’s Produce with a treasure trove of goodies (he works for food).  Among them was a bag of Melissa’s Baby Dutch Yellow Potatoes, Cleaned and Sliced Leeks, and Fresh Peeled Garlic. 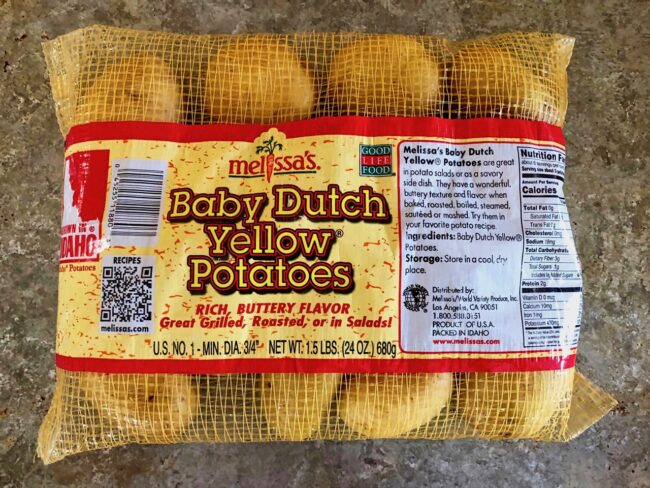 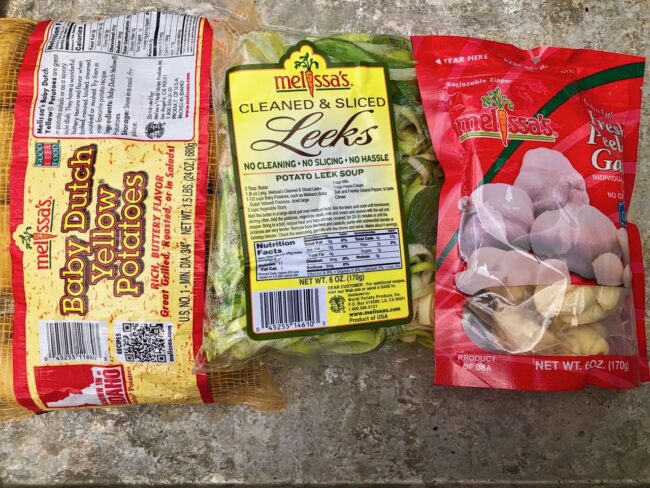 Tom often seems to think our kitchen is a Chopped episode and loves to bring home things for me to make into something for dinner. However, this was an easy one.  I immediately thought of the “Wow” dish we had in Tetbury on our trip to England in 2013 [which was a Roasted Breast of Chicken on a Bed of Rosti with Creamed Leeks, Smoked Pancetta and a Girolle Sauce.

I decided to make my version of this dish.  But first, what is a girolle? 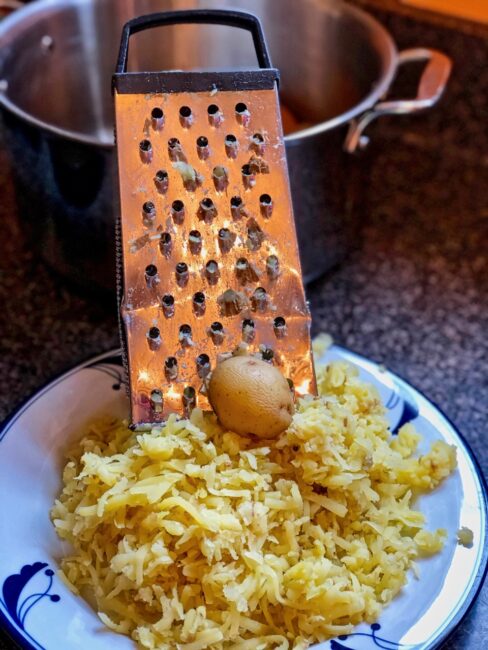 “The Girolle or golden chanterelle is a small, seasonal mushroom with a peppery flavor.”  Tom couldn’t find any chanterelles, so we went with my favorite mushroom, a brown cremini.

Next up, how to make the rösti?  We love, love, love rösti potatoes, having first tasted them in Switzerland. They are like hash browns, crunchy on the outside and creamy deliciousness on the inside, frequently made with cheese or onions and herbs.

Although rösti is frequently made with Russet potatoes, I went with the bag of Melissa’s Baby Dutch Yellow Potatoes, parboiling them first, then refrigerating them for a few hours before grating and cooking in lots of butter in a cast-iron skillet.  This was delicious, but I have to admit it is quicker and easier to use pre-made frozen Hash Brown Patties.

I then made a sauce of pancetta, leeks, mushrooms, and tarragon with a white wine reduction and pan-fried the chicken breasts seasoned with Herbs de Provence.  Pile it all on the bed of crispy hash browns, and you have a dinner fit for entertaining! 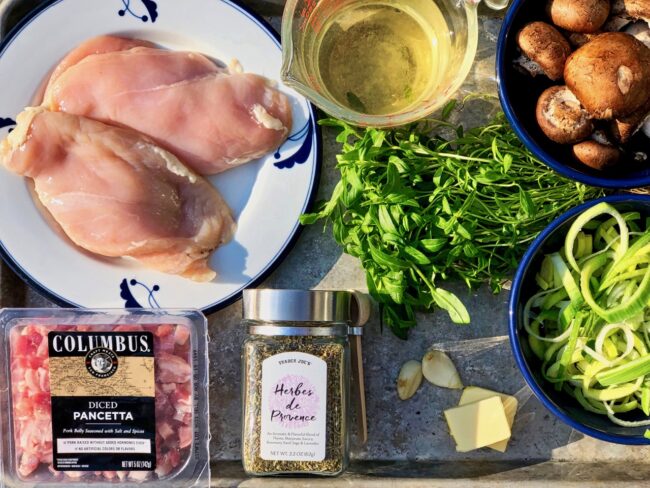 Make your rösti potatoes or cook hash brown patties according to package directions.  Keep warm in the oven. 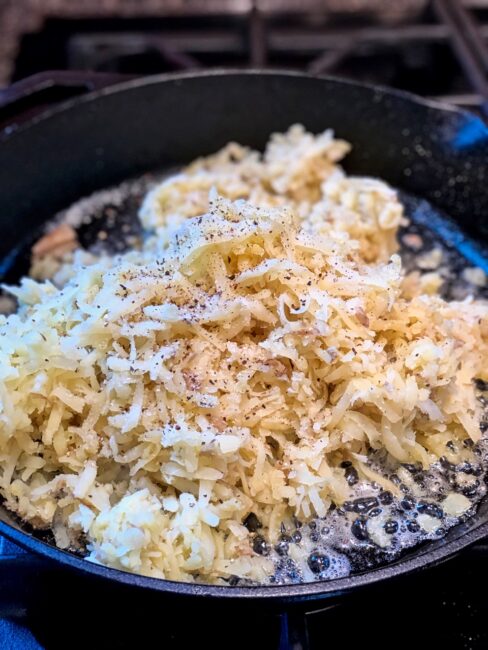 Pat the chicken breasts dry with a paper towel and season liberally with a pinch of Kosher salt, a couple of grinds of fresh ground black pepper, and a big pinch of herbs de Provence on both sides.

In a large skillet over medium-high heat, sauté the pancetta until crispy.  With a slotted spoon, remove the pancetta to a paper towel to drain.

In the same skillet, if needed, carefully add 2 T. olive oil, and once it is heated until shimmering, pan fry the chicken breasts until browned on both sides and cooked through.  Remove the chicken breasts to a heat-proof plate, cover with foil, and place in the oven to keep warm.

In the same skillet (do not clean), melt the butter and sauté the garlic, leeks, and mushrooms until softened (4-5 minutes).  Once softened, sprinkle with the Herbs de Provence and tarragon stirring to combine about 1 minute.  Stir in the white wine and let simmer until reduced by half.  Return the pancetta and any chicken drippings accumulated on the plate to the pan and stir until warmed—salt and pepper to taste. 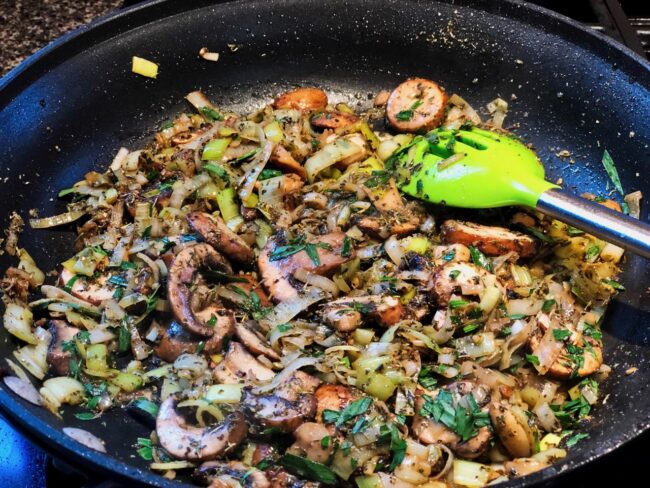 While the sauce is warming, slice the chicken breasts. 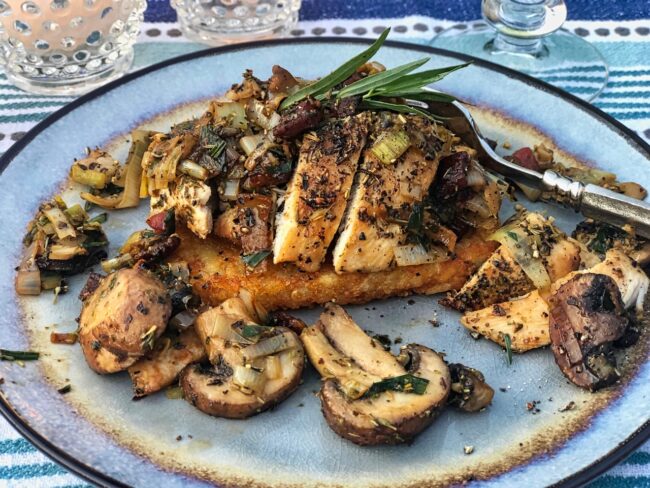 To serve, place the rosti or cooked hash brown potato patty on your plate, top with the sliced chicken breast and spoon the pancetta, leek, and mushroom sauce over the top.  Garnish with a sprig of tarragon.  Wow! 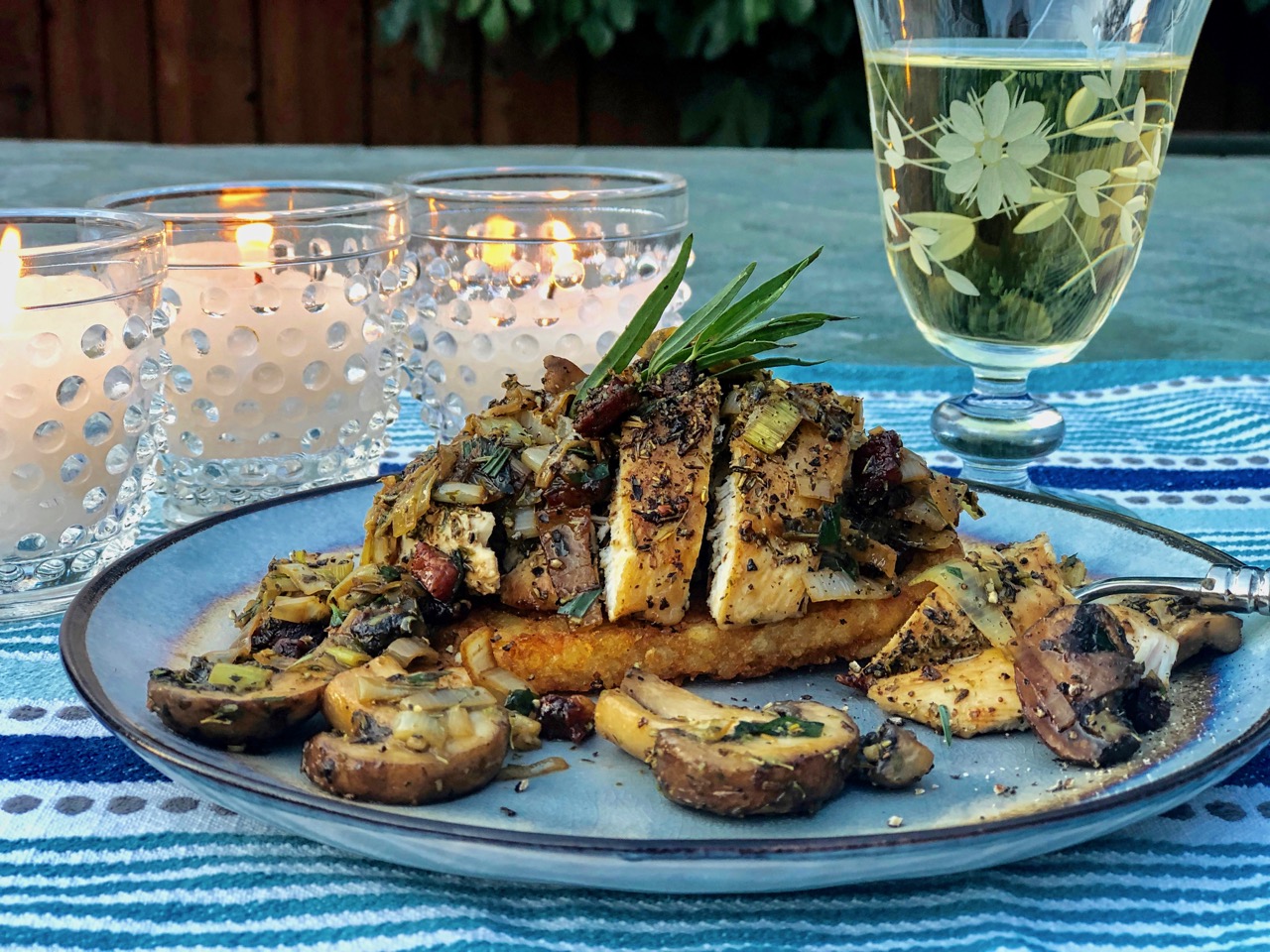