“The Pride Of The Pacific” 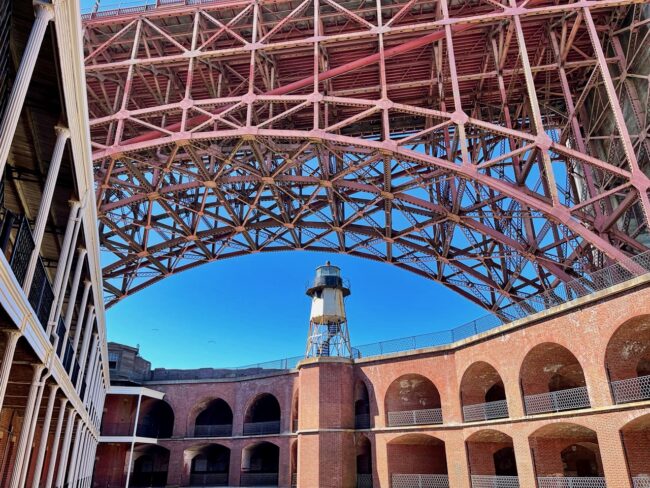 So you say you didn’t know there was a fortress constructed in the mid-19th century to help defend San Francisco against hostile warships? Well, neither did we until our recent getaway to The City by the Bay and a visit to Fort Point National Historic Site, situated virtually underneath the Golden Gate Bridge.  Referred to as “one of the most perfect models of masonry in America,” Fort Point was built by more than 200 men between 1853 and 1861. At the time, more than 30 forts had been constructed along the Atlantic and Gulf coasts to provide coastal defense system, but Fort Point would be the only one constructed in that era on the west coast and “would be the only fortification of this impressive design constructed west of the Mississippi River.” It was also the last of these forts to be built. 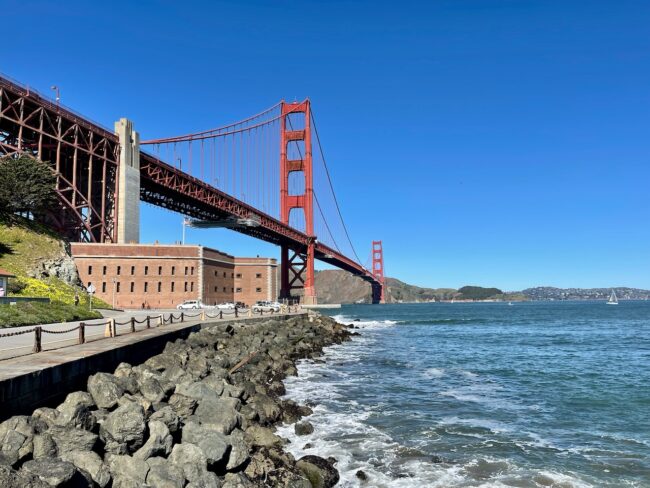 On a picturesque (and very windy) San Francisco day, Tracy and I drove to scope out Fort Point. It’s a short walk from the parking area (limited spots) to the fort, which affords also fantastic views of the Golden Gate Bridge. There would be more of those photo ops to come throughout our tour. 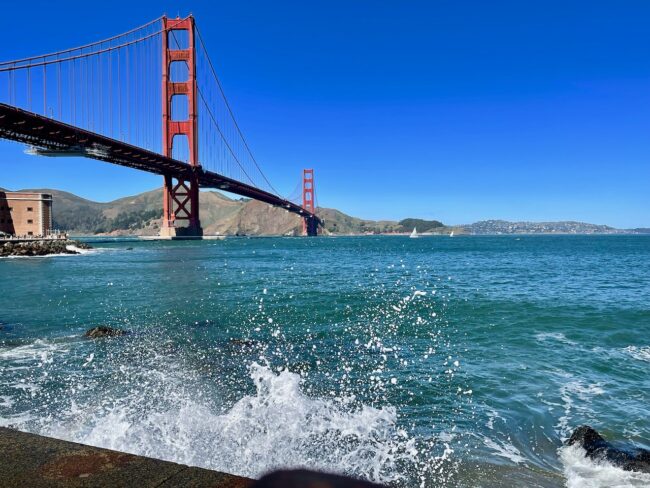 We entered the courtyard (or parade ground) at Fort Point and gazed up at its four tiers. The 1,500 foot-long structure is said to be comprised of eight million bricks that were made in a nearby brickyard. 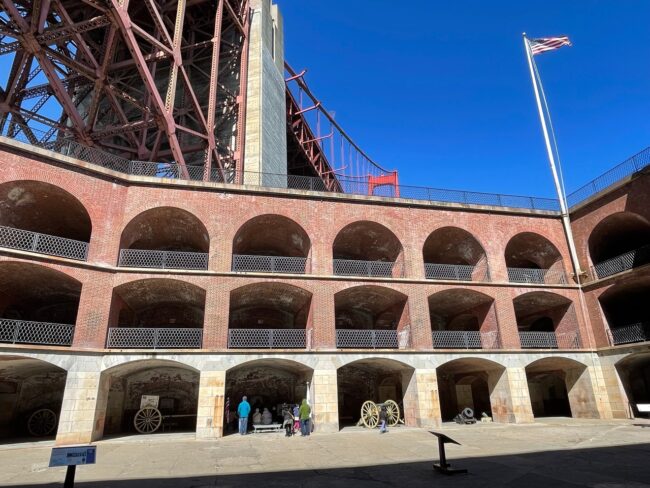 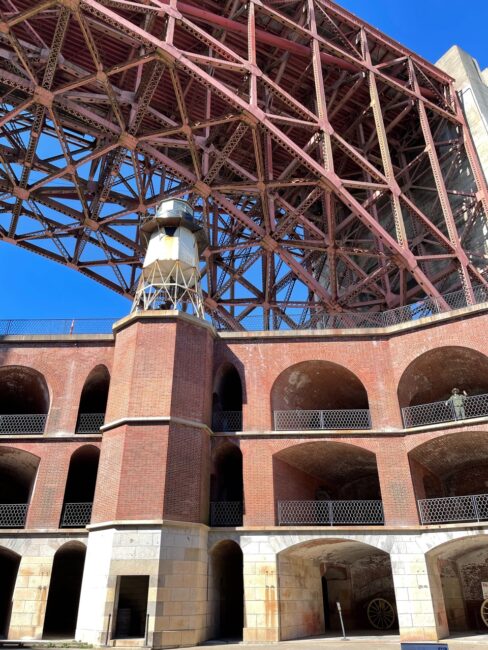 Trying to escape the icy cold wind, we scurried across the courtyard to join the group of people listening to a ranger give an informative talk on the history of the structure and its uses during its various stages of existence.  During the Civil War, more than 500 soldiers were garrisoned here. 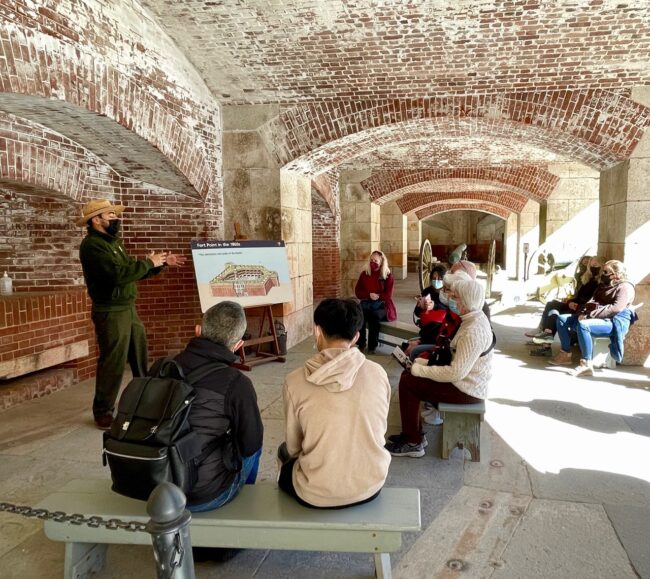 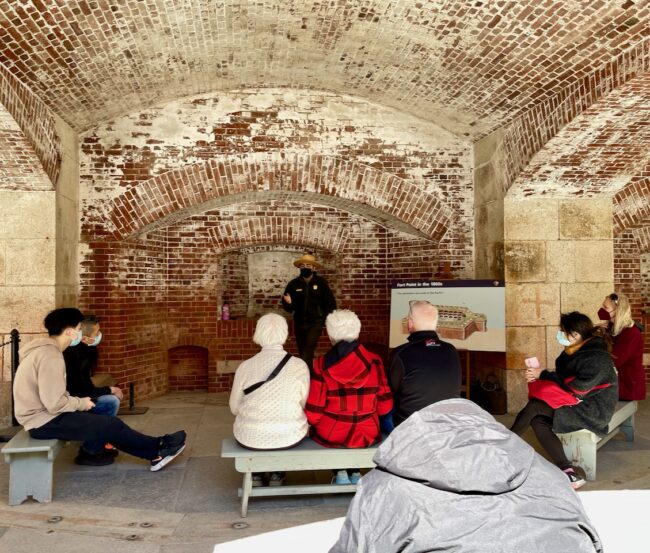 Walking around we noticed a few of the cannons. At one point during the Civil War, Fort Point had more than 100 guns mounted. No military action ever took place here. 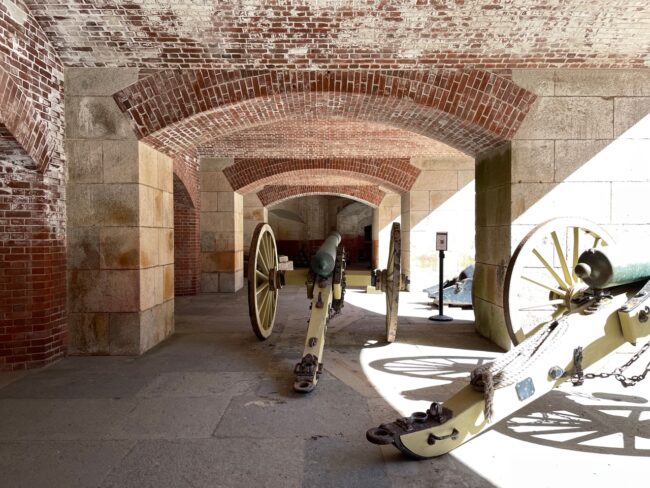 There were also rifle slits to help the soldiers ward off any would-be attackers. This guy didn’t look too concerned. 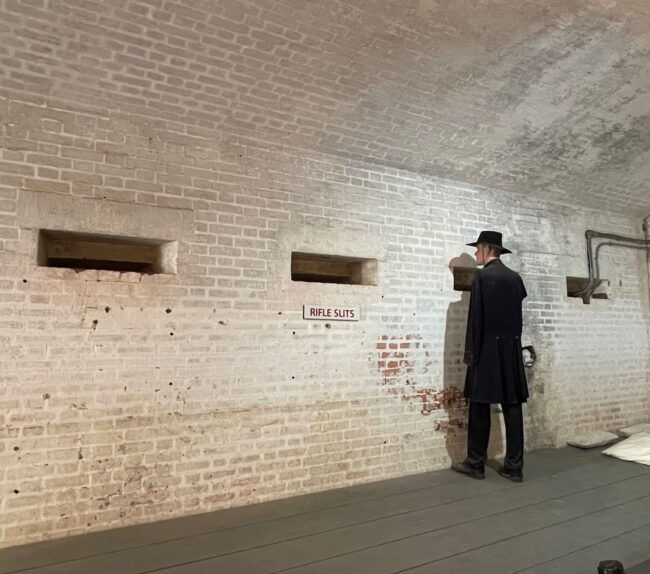 It was now time to climb the granite spiral stairs toward the top. Suddenly, I had a flashback to the Alfred Hitchcock movie where a famed scene filmed here included Kim Novak’s character leaping into San Francisco Bay at a spot near the fort. “I hope I don’t get Vertigo,” I said to Tracy. She responded, “Some of your jokes are for The Birds.” 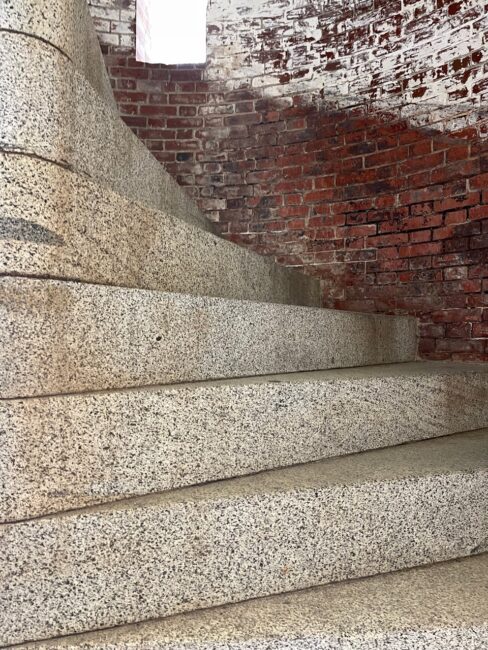 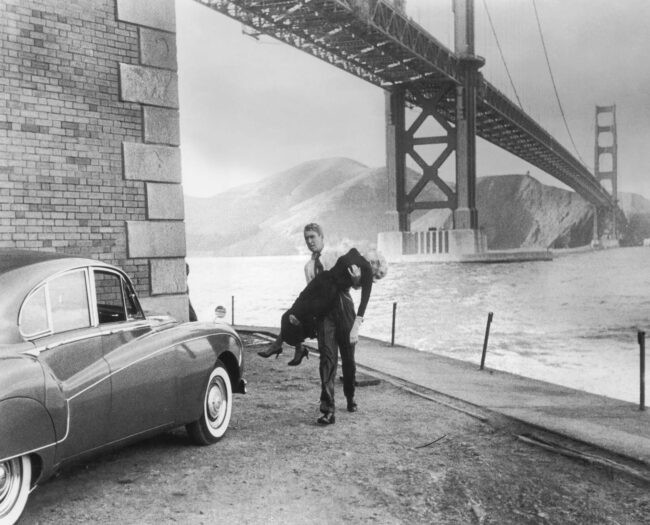 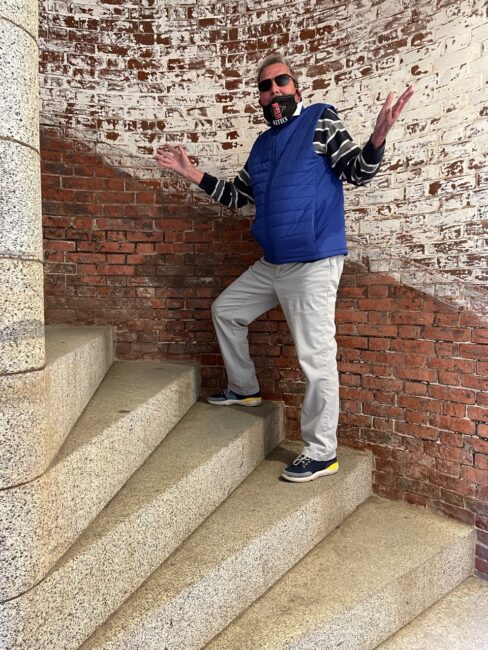 On the second tier, we made our way into the officers quarters and barracks that show what life was like back during the Civil War. There was a long corridor leading from room to room detailing life at the fort. 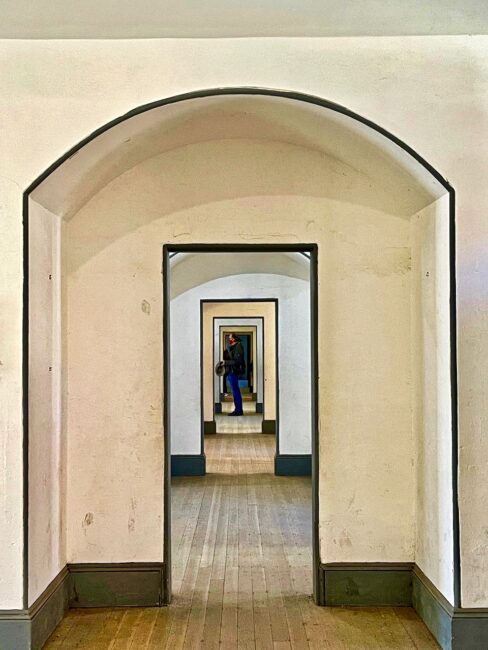 Exhibits told a myriad of stories, including those of the Buffalo soldiers. 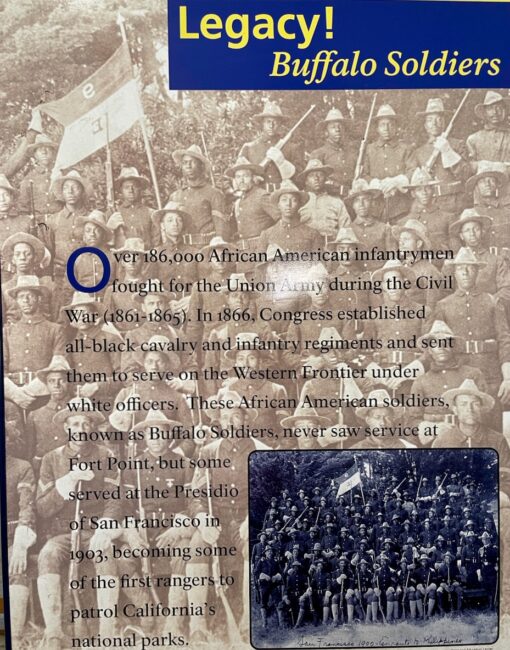 There were some interesting tidbits about life in an 1860s kitchen. Its “Kitchen Philosophy” stated, “Remember that beans, badly boiled, kill more than bullet; and fat is more fatal than powder.”  Obviously, they knew the cook at my San Diego State dormitory. 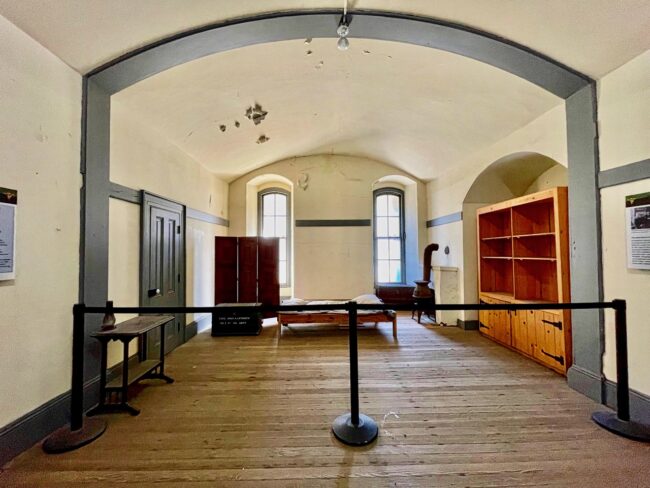 … and what it entailed to be a lighthouse keeper. 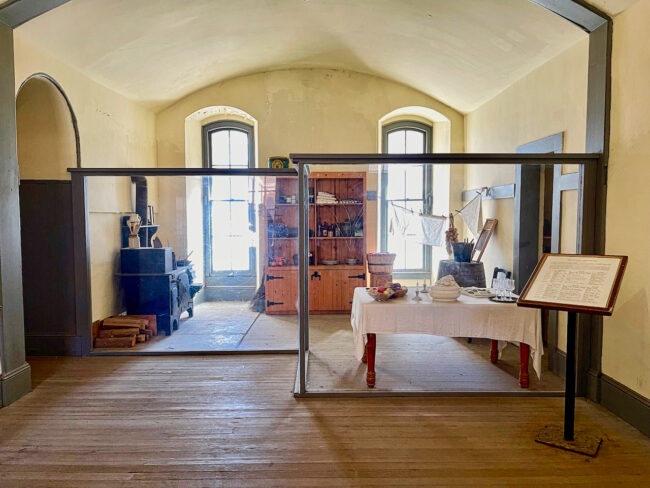 Why a lighthouse keeper? Walking the ramparts one could see “Fort Point Light,” the decommissioned lighthouse that sits atop Fort Point. It was the third lighthouse at this site, and for 70 years, until 1934, it helped guide mariners into San Francisco Bay. 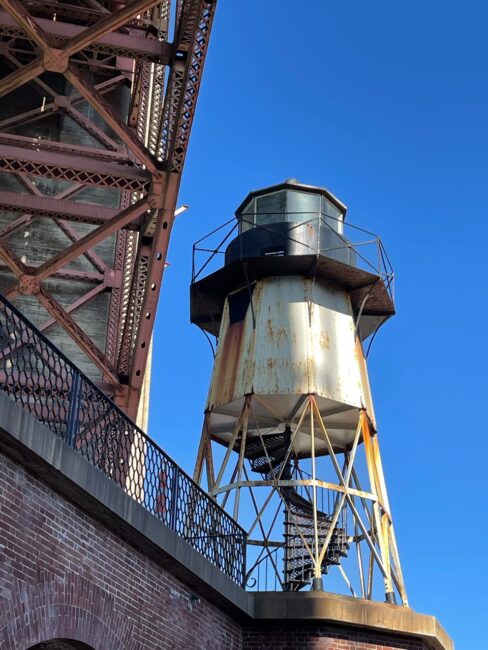 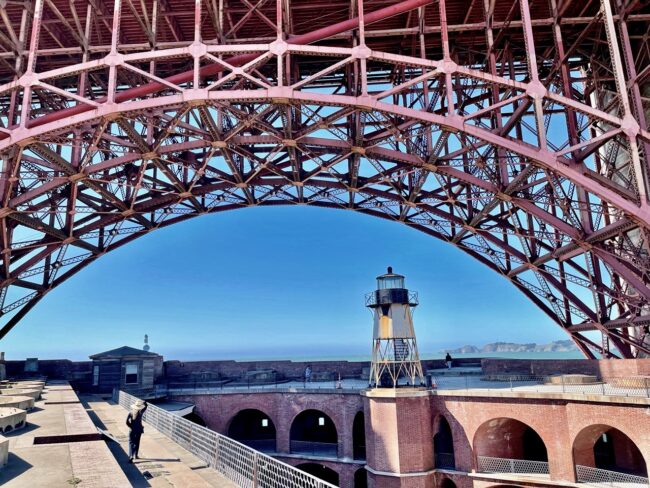 Once the Golden Gate Bridge was constructed, with the foundation blocking most of the light that once shined out on the narrows, Fort Point Light was obsolete. At one time, Point Light “was one of 13 beacons serving San Francisco Bay.”

Oh yes, that bridge.  When the Golden Gate Bridge was first proposed, demolition of Fort Point was definitely one of the choices being strongly considered.  We learned, however, that the chief engineer of the bridge project (Joseph Strauss) was so enamored with its architectural history, he changed his plans to build the bridge over the fort so it would retain that architectural integrity.  Strauss preserved the historic fort by spanning an arch bridge over it … the only arch on the Golden Gate Bridge.  Strauss said, “While the old fort has no military value now, it remains nevertheless a fine example of the mason’s art…. It should be preserved and restored as a national monument.” 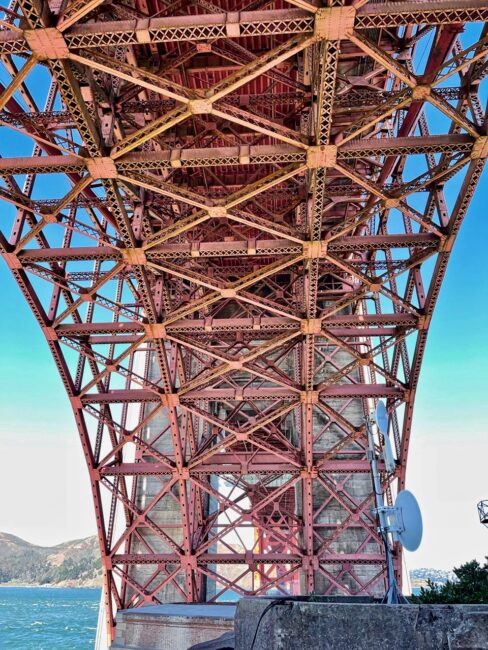 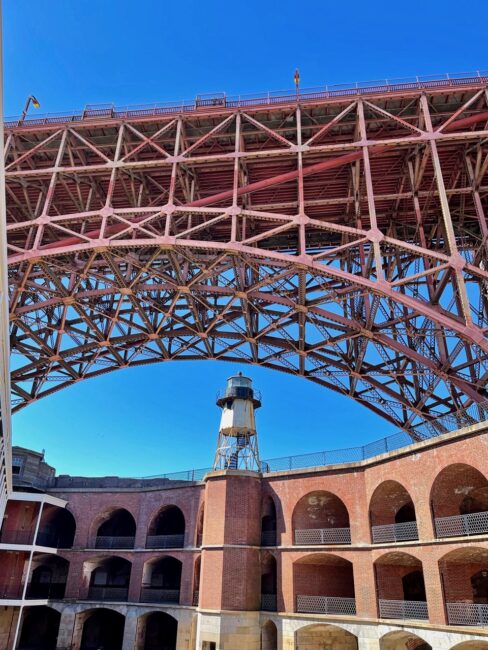 There are numerous vantage points to take photos of this unique mesh of historic edifice and momentous bridge. 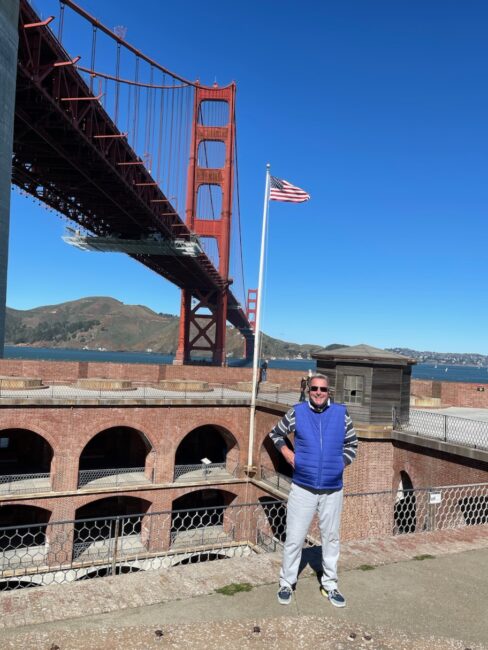 It’s quite a a visual experience, especially on a gorgeous day.  We navigated the circular stairway to the top (fourth) level, and the views were once again spectacular.  Whether looking out on the city … 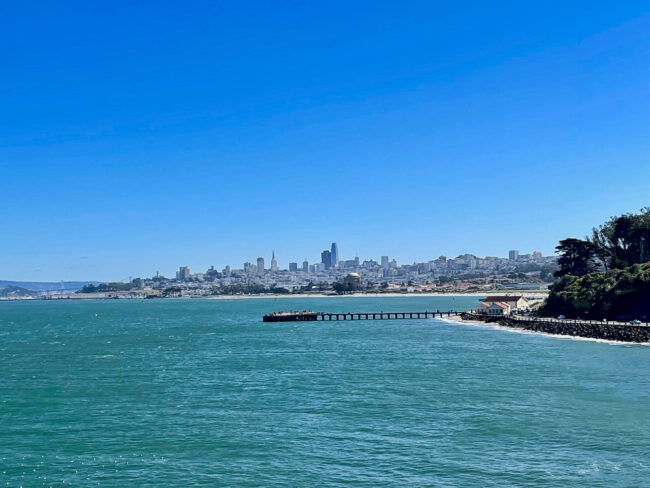 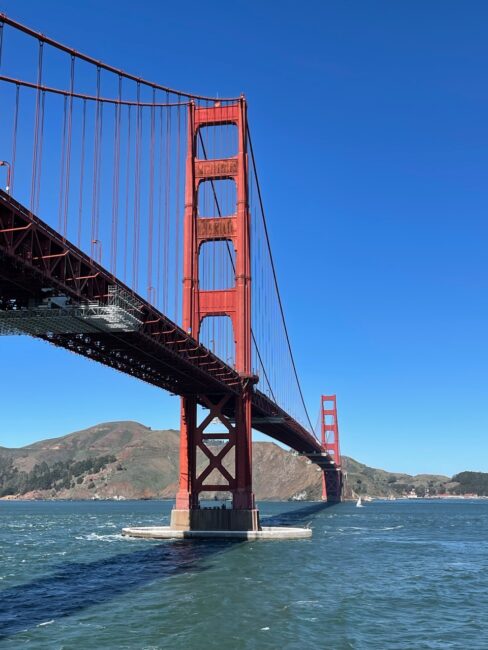 … or the bay, each view was more dazzling than the last, although we had to make sure not to get blown away. (that mask helped keep us warmer) 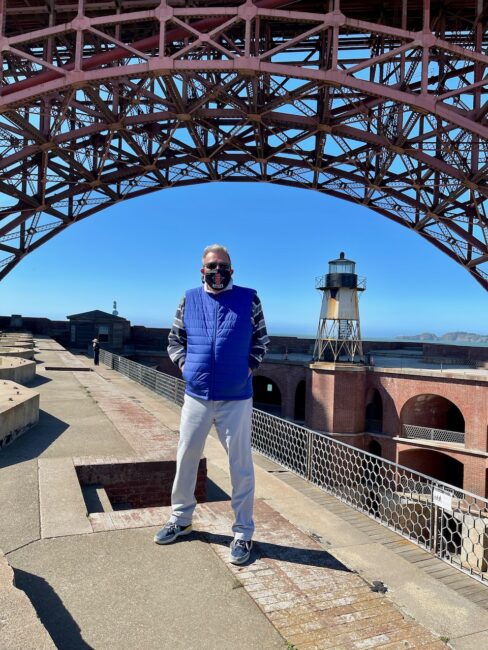 On the fourth level (or barbette tier), there were once 21 cannons stationed throughout, all aimed out to sea to prevent San Francisco from attack. A sign stated that back in 1863, “a Fort Point cannon could sink any wooden ship that came within two miles.”  Even during World War II, Fort Point was utilized by military personnel. Soldiers were stationed here in case there might be a submarine attack. 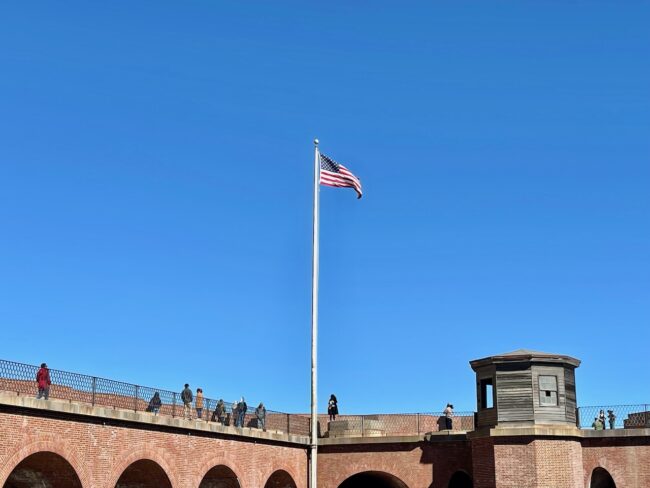 By 1970, public support landed Fort Point the honor of being named a National Historic Site, which led to its preservation status. 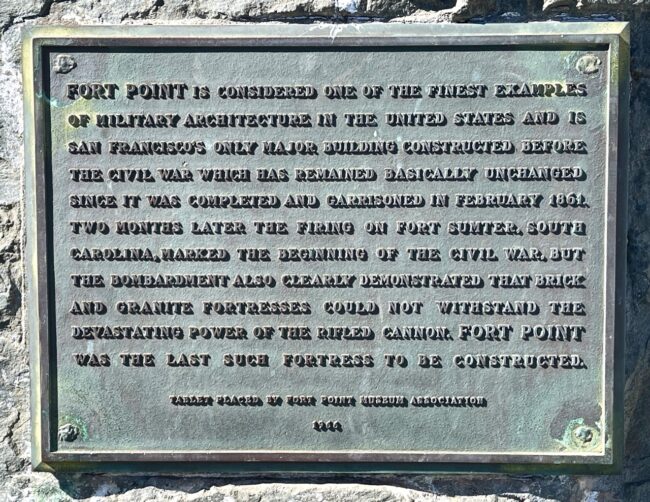 It was such a spectacular day that we made two quick stops at The Presidio, where we saw the Golden Gate from a different angle … 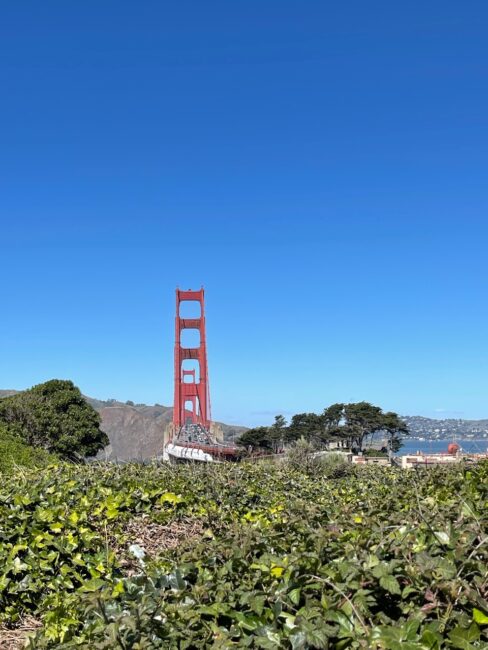 … and the always stunning Palace of Fine Arts. 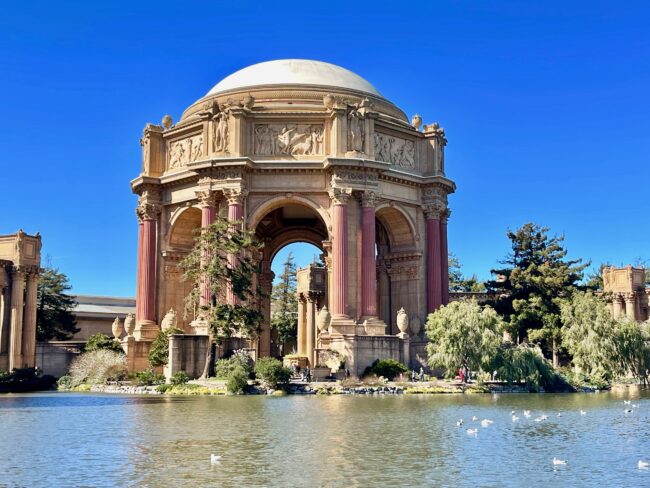 With its historic significance, not to mention its million dollar views, Fort Point is a great one-hour stop when you visit San Francisco. 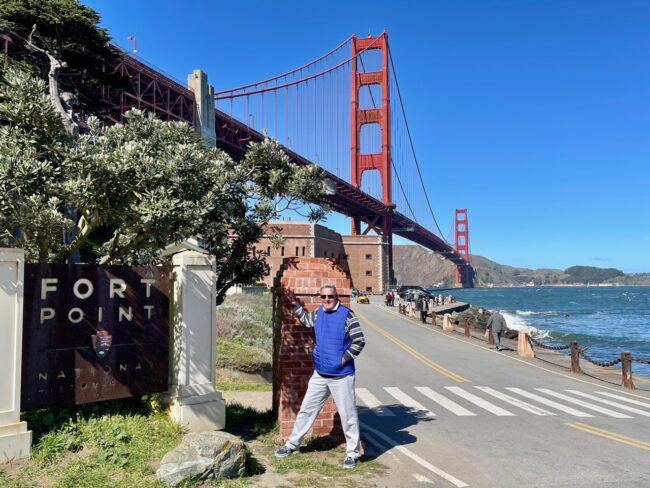 One can witness first hand why it’s been called “The Pride of the Pacific” and the “Gibraltar of the West Coast.” On some days, you could even say that you were “blown away” by it all.