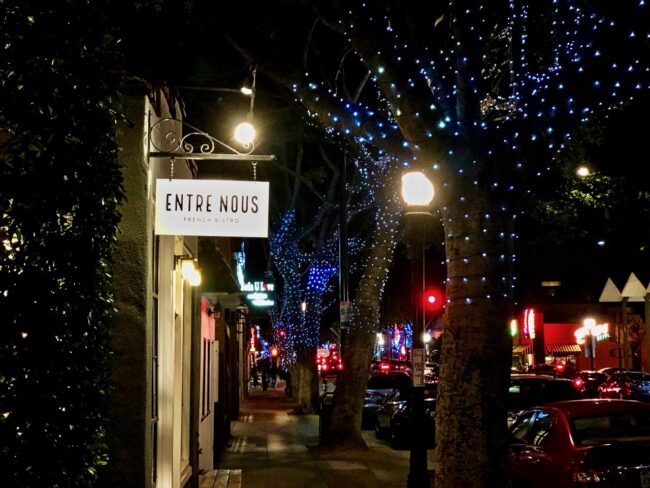 Realizing that Tracy has had to put up with me for 25 years of marriage, I thought it would be nice to celebrate our Silver Wedding Anniversary at a restaurant that has garnered some great reviews lately. We visited Pasadena’s Entre Nous French Bistro shortly after it opened in late 2018 and thought it to be a good, but not necessarily great, dining establishment.  After last week’s meal, “great” might be an understatement.

The owners, Mathias Wakrat and Jean-Christophe Febbrari, are former partners in Cafe Beaujolais in Eagle Rock (another long-time Mai Tai Tom favorite restaurant).  Entre Nous’s chef is Hugues Quintard, who has worked at, among other establishments, Taix and Cliff’s Edge. In a Pasadena Star News interview, Wakrat said of Quintard, “He’s a real French chef; there aren’t many chefs like that anymore. He knows how to make anything taste good. He knows what’s quality product.” 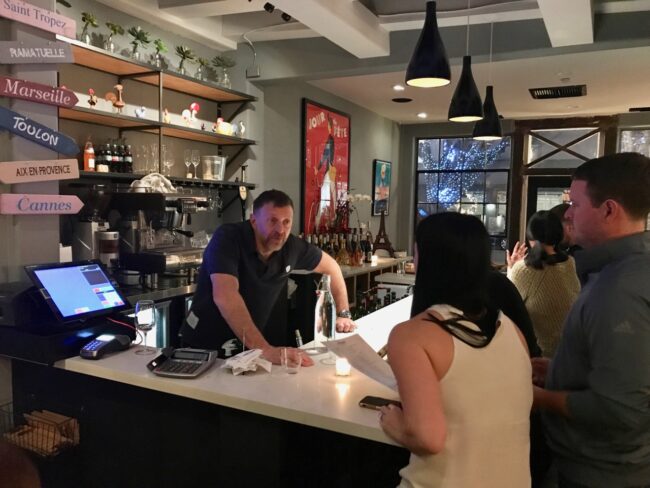 Located in the former home of Ración in Pasadena, the restaurant offers an inviting interior including a small outdoor patio and small bar where the owners were welcoming in their guests.  It was raining on the evening of our first visit last December, and the dining room exuded Parisienne bistro charm with its pale gray walls, vintage posters and flickering candles. 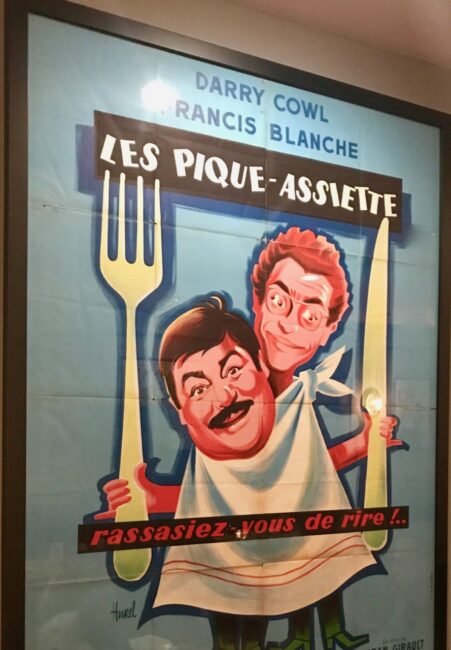 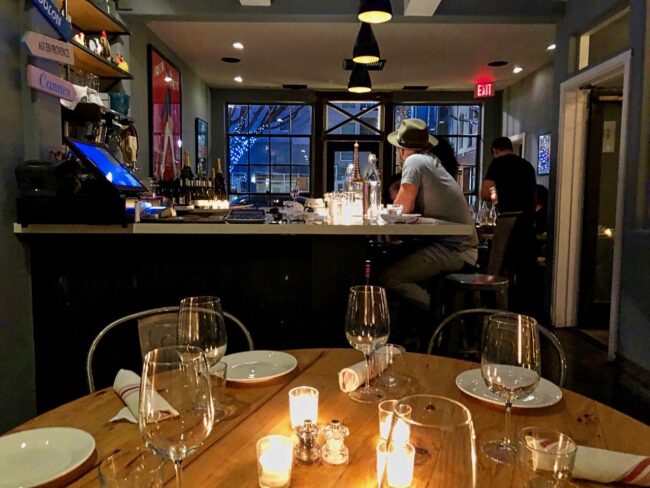 Our friends Rolando and Talia joined us on our first visit to Entre Nous. As is Tracy and my tradition at most French restaurants. we started with a Kir Royal; sparkling wine and crème de Cassis ($15), because when in Paris or Pasadena, it just hits the spot and is bubbly and festive.

On that rainy December evening, I started with Escargots de Bourgogne; Snails in shells, garlic, butter, parsley ($18 for 6). Tracy gave me “the look,” which I ascertained was not to tell Rolando and Talia I was feeling “sluggish.” I guess I’ve used that too many times. Fortunately, I deftly handled the escargot tongs, so no shells flew off onto unsuspecting diners. 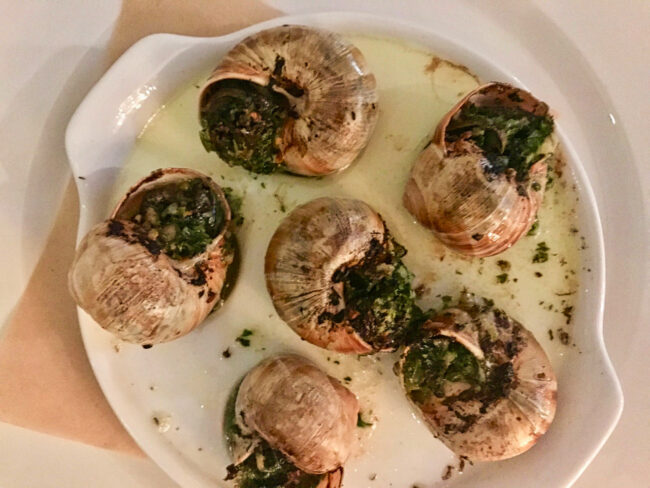 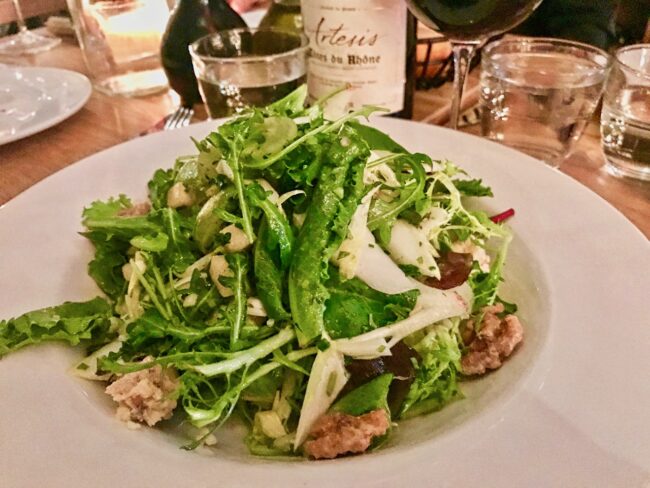 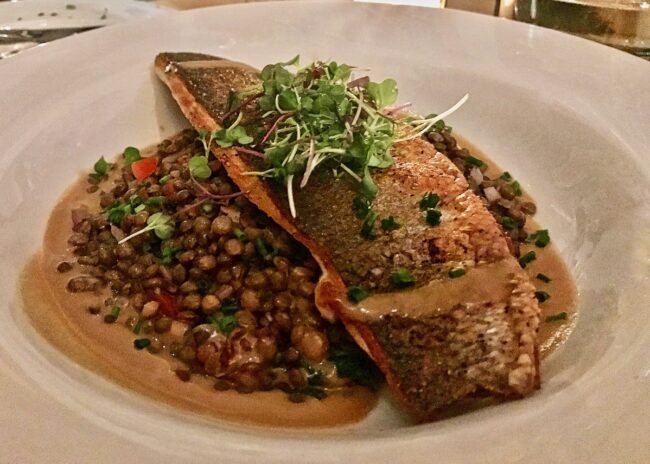 Rolando ordered the Entrecôte Au Poivre; Ribeye steak, peppercorn sauce, French fries ($35).  This was a large serving and could easily be shared.  Rolando shared his fries, and they were crunchy and delicious.

For dessert, the four of us, although full, shared the Tarte Fine aux Pommes; apples, puff pastry and Chantilly cream ($11), which our server described as a “warm hug for your tummy.”   What’s not to like about that? 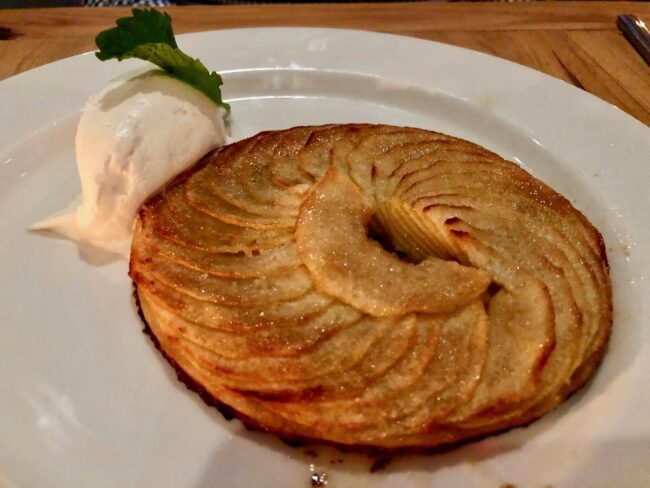 Since the restaurant had been only open for about six weeks, we determined we’d come back and try it again at a later date, which turned out to be in July for our 25th anniversary meal.   Of course, we first toasted our special evening with a Kir Royal. 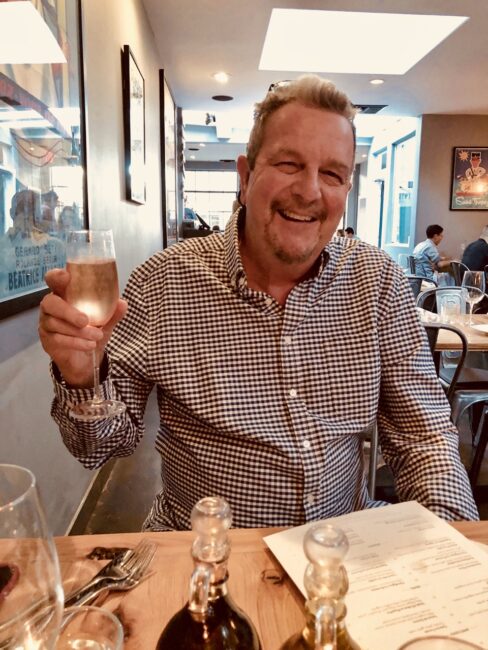 For starters, we shared the escargots, because I wanted to have enough room to have that apple tart dessert to myself. I may be happily married, but we don’t have to share everything. 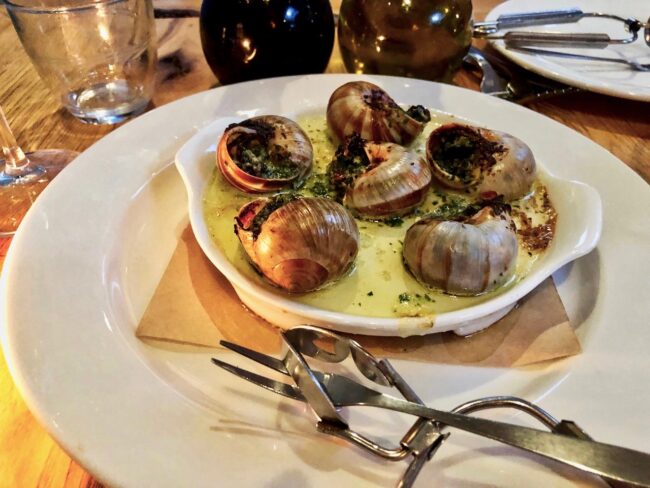 For her main dish Tracy decided on the special Seared scallops in a sublime saffron cream sauce served with saffron rice and baby patty pan squash ($35).  Just like our friend Kim never passes on a Caesar Salad, Tracy never passes on scallops, and after finishing it she thought this could have been the best scallop dish she has ever eaten. Now that’s saying something.  Wow! 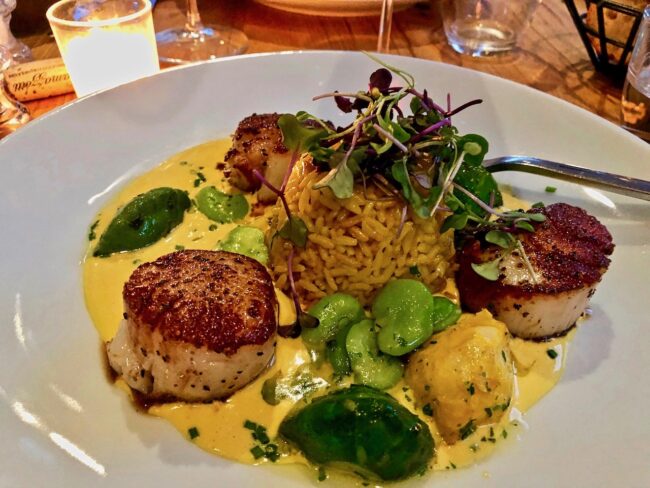 I had read that one of the restaurant’s main focus was on its “quality of meat and produce.”  With that in the back of my mind (and our server’s suggestion that this would be a wonderful dish), I ordered the Filet Mignon à la Bordelaise; Red wine reduction, mashed potatoes, haricot vert and carrots ($37).  I have dined at some incredible steakhouses in my lifetime (I am a dedicated carnivore), and this steak was as good as any I have tasted. The red wine reduction was perfect.

The filet mignon was perfectly cooked (medium rare), and melt in your mouth delicious.  The mashed potatoes were creamy, and the haricot vert and carrot were divine. If there is such a thing as a perfect combination of meat, potatoes and veggies, this dish came pretty damn close. 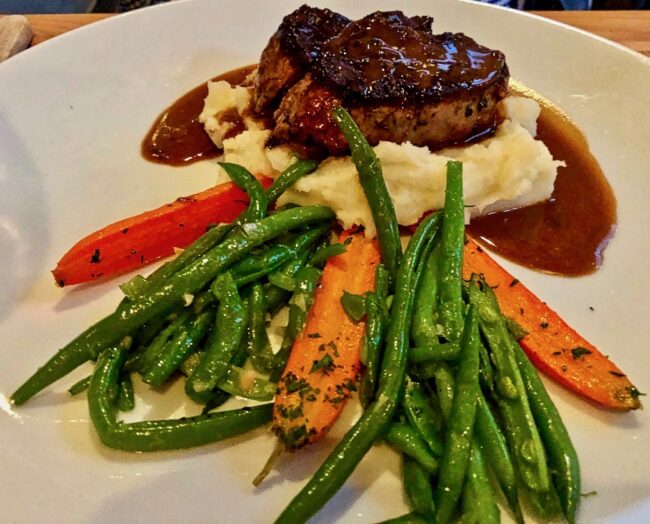 For dessert, it was apple time for moi with the Tarte Fine aux Pommes, where the apples are sliced paper thin.  It was, once again, merveilleux. At the suggestion of our waiter, Tracy tried the Oeufs à la Neige; Egg white meringue, crème Anglaise with raspberry sauce ($11).  It was light and delicious. Yes, I stole some. 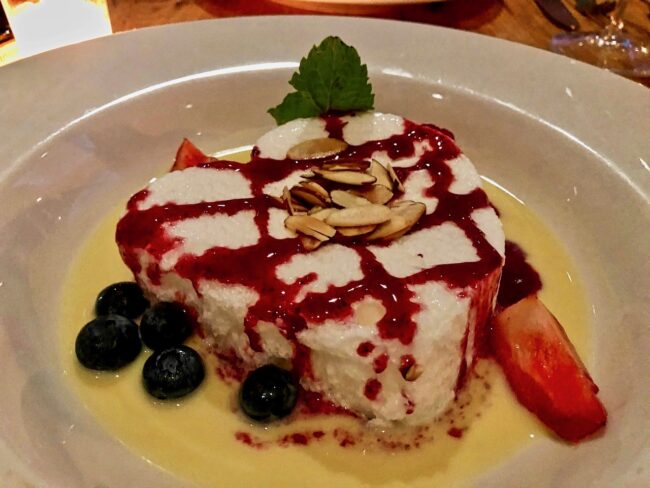 After the meal, Febbrari stopped by our table for a little chat, and I asked him what he considered the restaurant’s signature dish. He said it was the Bouillabaisse Marseillaise; Market selection of fish, saffron broth, rouille and croutons. We will need to bring our seafood expert Mary next time.  She’s seen below devouring an entire fish and its family in Croatia. 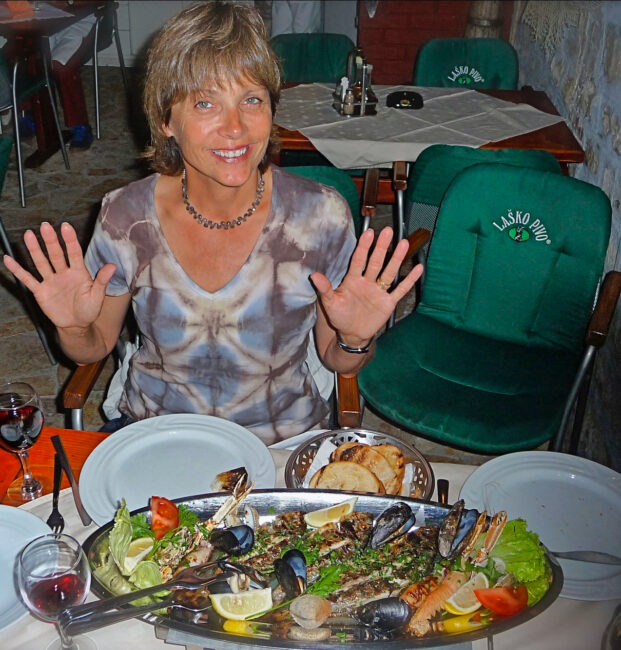 The wine list at Entre Nous is a fairly priced one, with five French wines under $50. We had a special bottle that we brought from home, and the corkage fee is a reasonable $15.  It’s nights like these that Uber was invented. 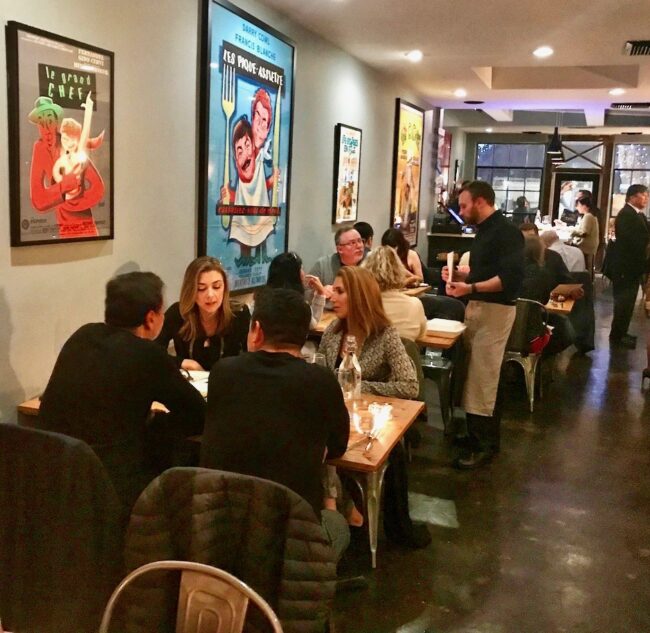 I had hoped Entre Nous would provide a great meal for our 25th anniversary, and it exceeded our wildest expectations. 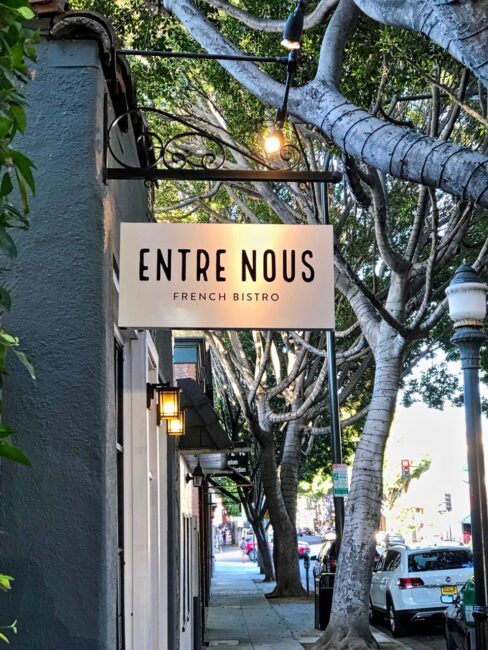 Tracy and I have been fortunate to dine at a number of terrific restaurants so far in 2019, and Entre Nous ranks right up there with all of them. I expect we’ll return sooner rather than later, and if you’re looking for a dining establishment that offers delectable food in a relaxed and charming environment, Entre Nous should be right there at the top of your list. Merci beaucoup!