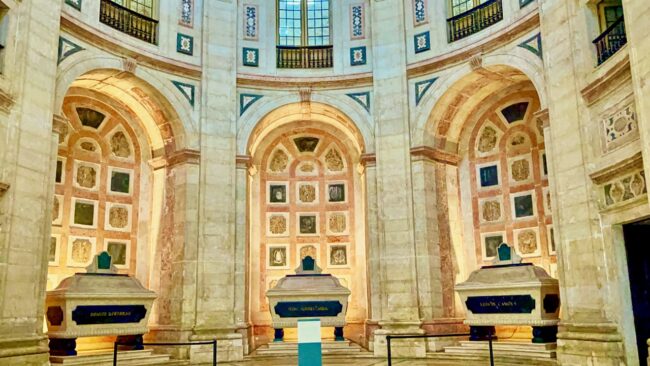 I was the first to sample Sunday breakfast on the Altis Avenida rooftop and was quickly joined by this feathered friend. He looked over at the buffet of eggs, cereals, sausage, fruit and other items and decided he’d rather not consume all the calories, I, on the other hand, partook of this decent array of morning sustenance. 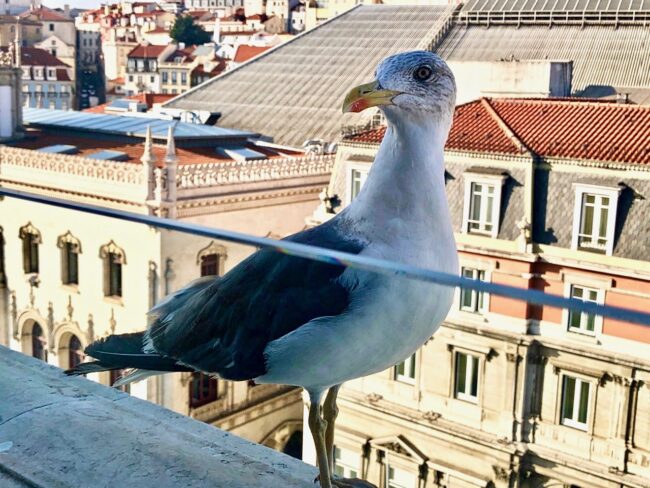 We decided to get an early start because our first stop of the day was one of Lisbon’s most popular attractions, Castelo de São Jorge (St. George’s Castle). Since I knew we’d probably exceed 10,000 steps on this day, I had a game plan for an easy way to get there. First, we’d grab an Uber to take us to a small grocery store named Pingo Doce Chão do Loureiro. Next, we’d take the Elevador Castelo up to a restaurant terrace, and from there it would be a short stroll to the castle. A perfect idea, except for the fact the elevator was “out of order.” Oh well, we needed the extra exercise to burn off those bacon and eggs. 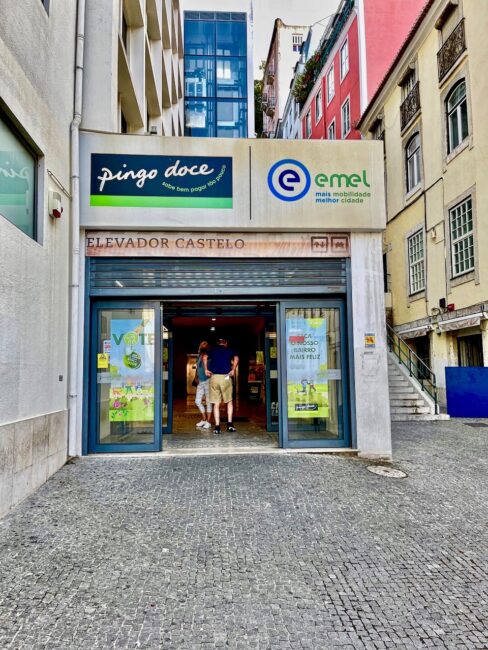 Up, up, up we walked to Costa do Castelo, and the cobble-stoned street walk to the castle was a fairly easy one in this Alfama neighborhood. 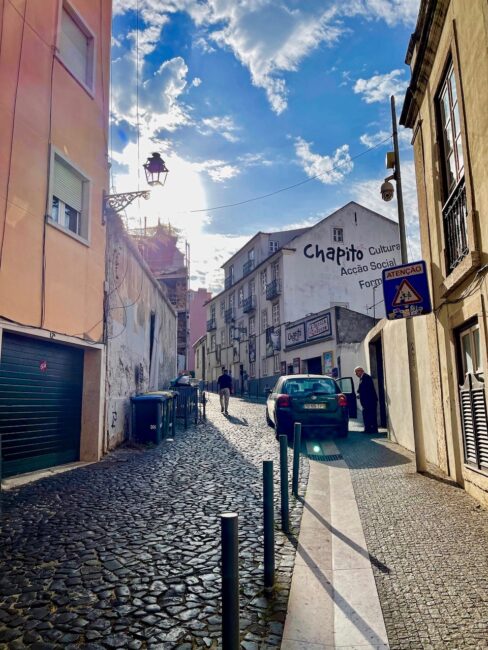 Tracy was ecstatic to get a photo of some Climbing Morning Glories flowers along the way. 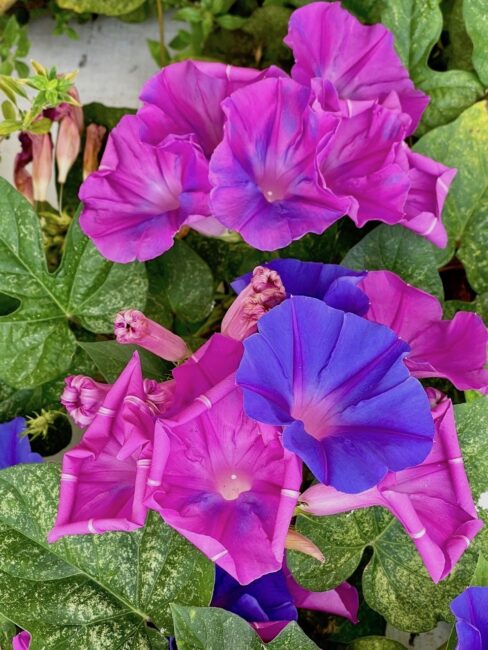 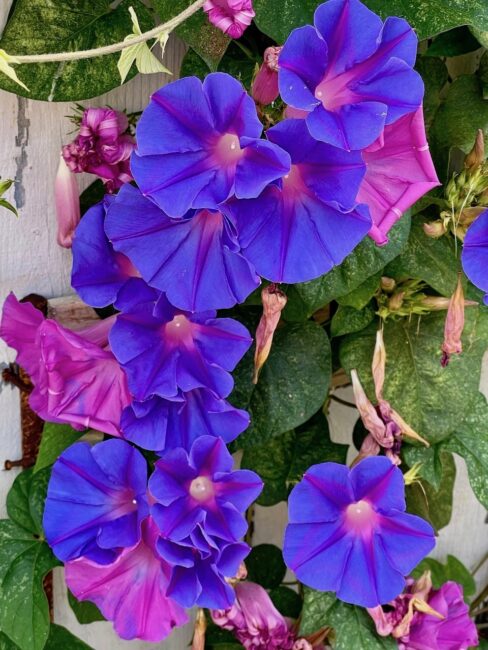 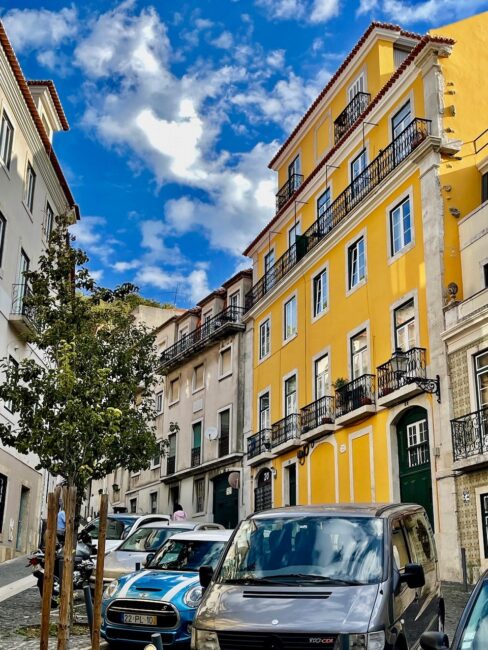 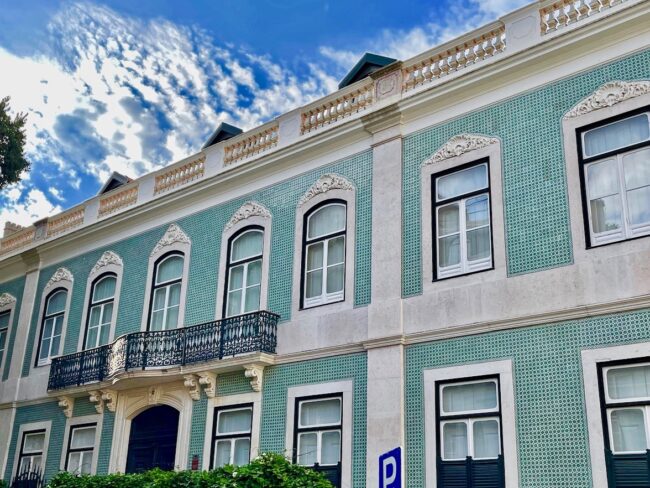 Hitting the entrance a little after 9 a.m, there was no line to enter the 11th-century castle resting majestically upon Lisbon’s tallest hill. 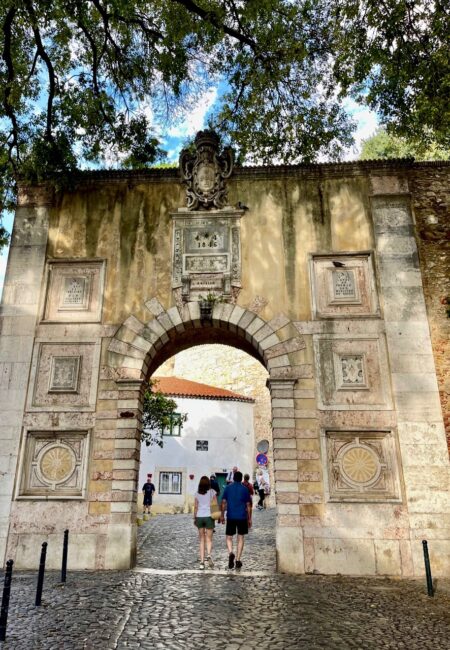 Despite a slightly hazy day, the views out toward the Tagus River and the Ponte 25 de Abril (25th of April Bridge, formerly known as Ponte Salazar, and renamed after the Carnation Revolution on April 25, 1974, a military coup that resulted in Portugal’s transition to democracy, were great. The bridge was inaugurated in 1966. 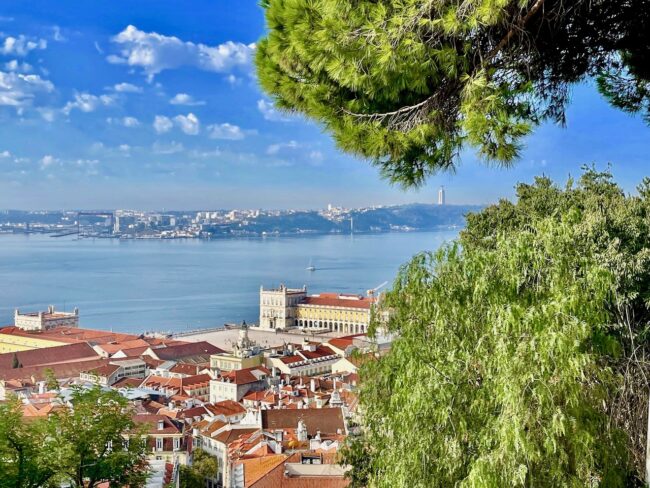 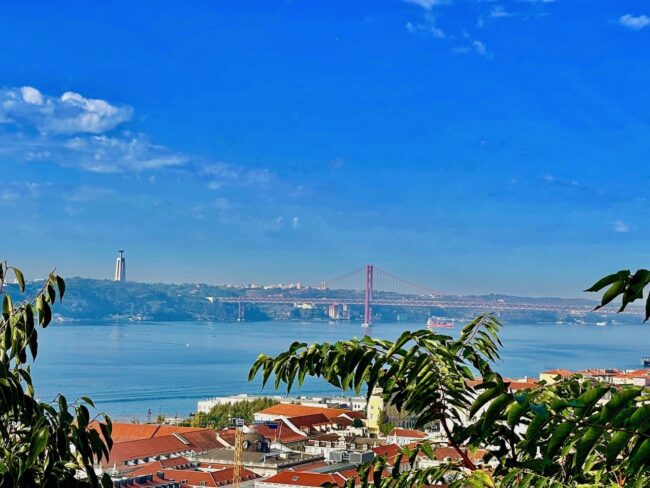 A medieval cannon on the battlement meant no one would attack us on this day, which would be another warm one in Lisbon. 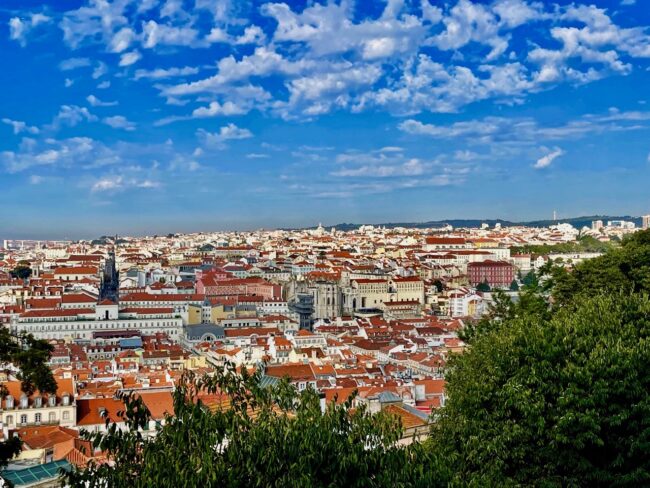 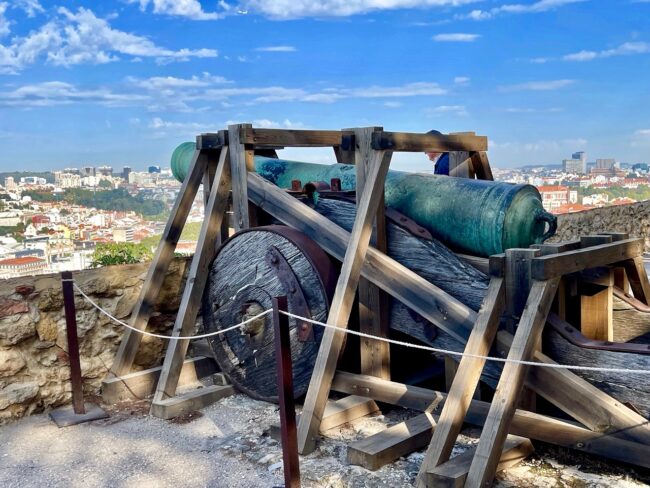 We pondered our next move (we really could have a used a map, but it is us). Actually, just meandering the castle grounds before the hordes of tourists ascended was a great way to start the day. 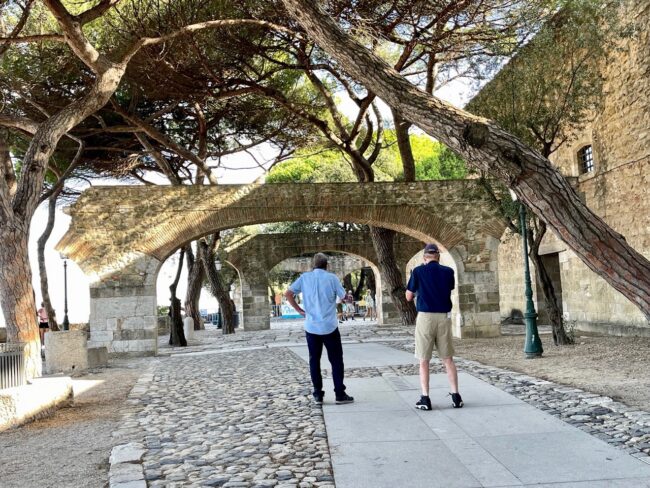 A nude female statue caught my eye. From a few websites I’ve read ,it seems the statue is of Olispona, who (according to some legends) was a woman whose arms turned into serpents and formed the hills of Lisbon. No mention if she sang the words, “The hills are alive ….” I’m guessing there is a more coherent theory on the hills’ origins. 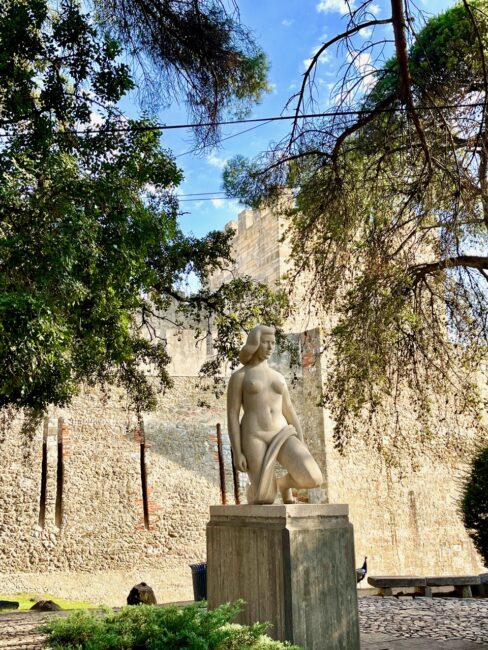 Peacocks roam freely in the gardens here, and this guy was very colorful. 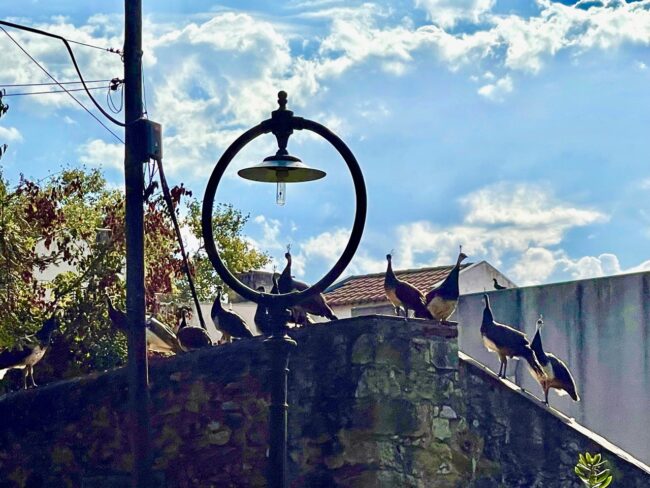 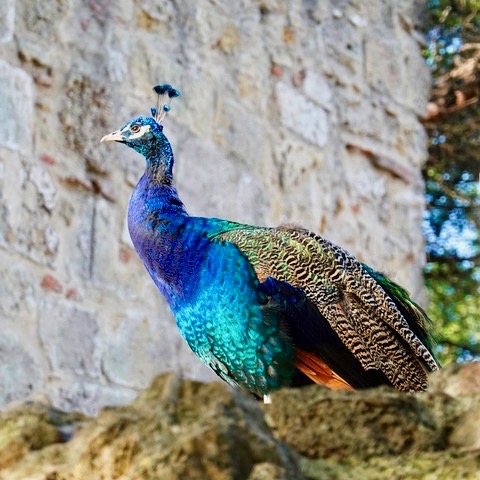 Once upon a time there was a Moorish royal residence that was eventually dedicated to St. George, the patron saint of England, commemorating the 1371 Anglo-Portuguese pact. We walked into what remains of the Alcaçovas Palace, which was heavily damaged in the 1755 earthquake. 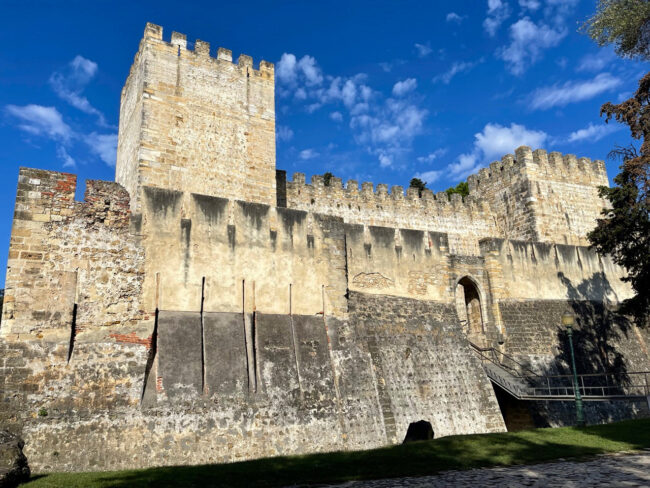 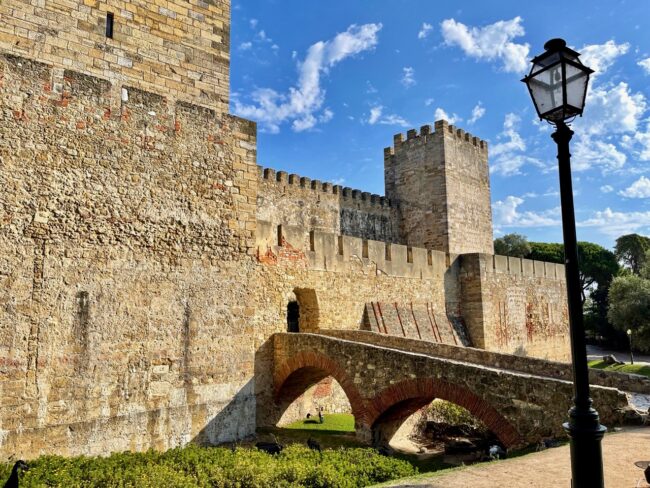 I guessed this is where the castle took root. 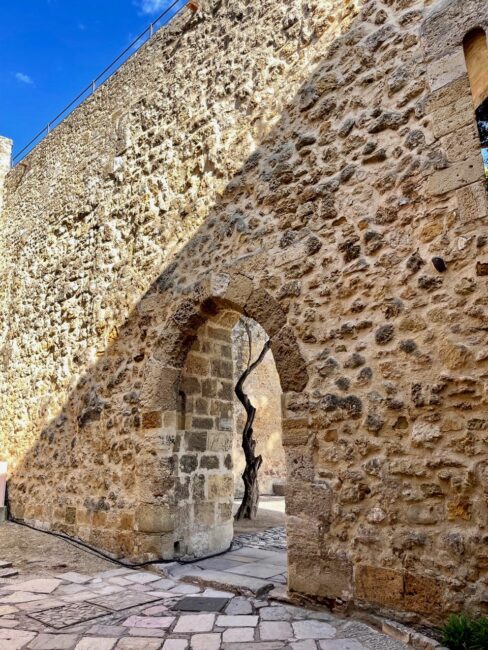 Now it was time to ascend some rather ste