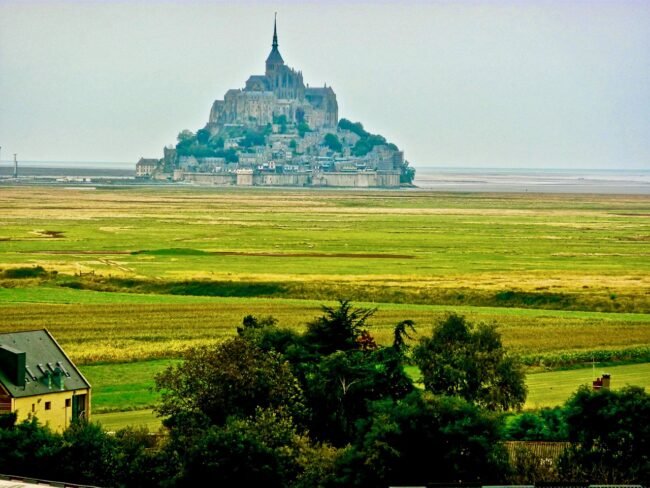 Day Thirteen – The Road Less Traveled, Stairway To Heaven, Sermon On The Mont, Addressing An Oversight, How Much Duck Could A Wood Duck Chuck, Another Oasis In A City and You Mean We Have To Walk This Far Again For Dinner

My iPhone awoke us promptly at 6:45 a.m., blaring out the Old Car Horn sound (yes, I am a joy to travel with), and a little before 8 a.m. the four of us trudged through the lobby of the Hotel Continental. Although we didn’t eat there, the smell of the still baking croissants was quite enticing.

Driving out of Angers on Sunday morning, the vibrant city of the night before was gone, and it was now more like a ghost town. It was either because it was early Sunday morning or that the other drivers were warned that we would be careening our Audi through town.

Madame Bleu must not have received enough sleep, because before you could say,  “Where the Hell are we,” she had us turning into the Château d’Angers, which, of course, was closed.  A few illegal U-turn later, we made it out of town, but Madame Bleu was all messed up.  I had printed out a map from Angers to Mont Saint Michel, but like a few of my travel maps that could have been of immense help, it was sitting on my dining room table at home.  I thought about calling the cats, but their map skills are somewhat limited.

I did remember we should follow the sign for Rennes, but Madame Bleu kept sending us off on tiny roads leading to even tinier roads. I should have just followed my gut (which looking at its largeness was pretty easy to follow), but instead I stupidly listened to our GPS tease. Finally, we told Madame Bleu to “fermez votre bouche,” and Kim started guiding us toward our destination of Mont Saint-Michel.

As we got close, you could see the old Mont in the distance, and as all the books report, it was quite a sight. We parked in the new parking lot (8.50€), and then we had a decision to make. We could walk (about 40 minutes) or take a shuttle. 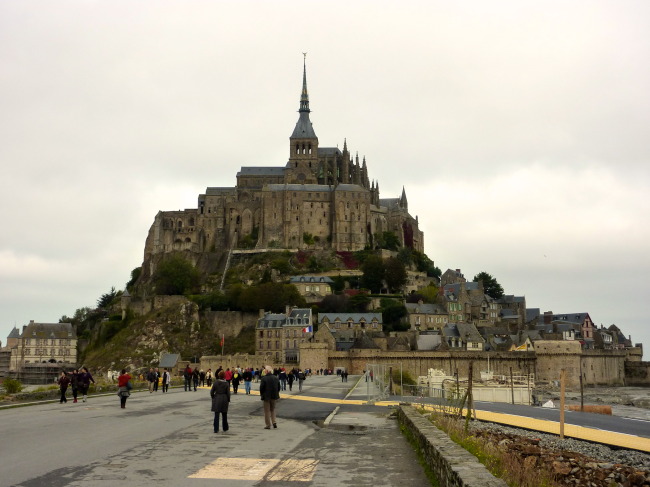 We hopped on the free shuttle (ten minute walk from the parking lot, with one leaving about every five minutes). 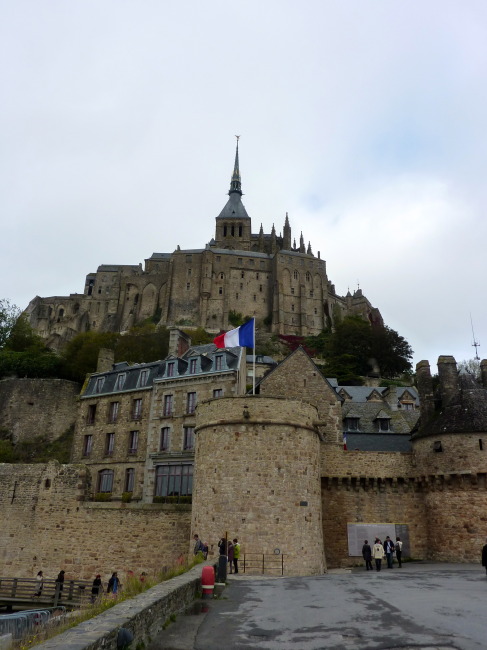 A few minutes later, we were looking up at the amazing Mont Saint-Michel. Although it wasn’t used in the movie, it sure reminded me of the end of Monty Python and The Holy Grail, but I decided not to taunt anyone, even for a second time. 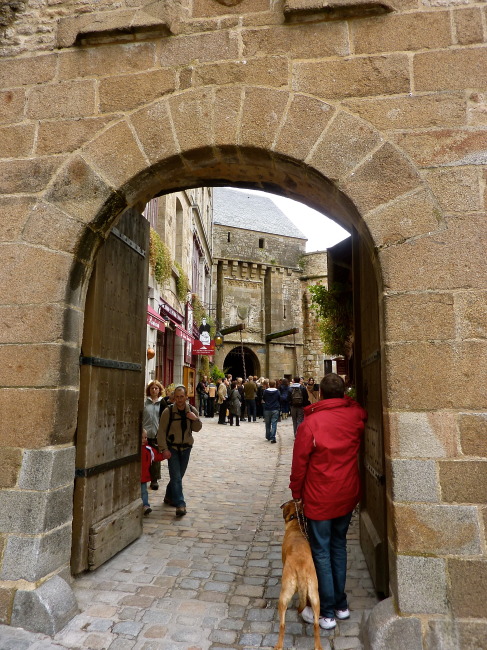 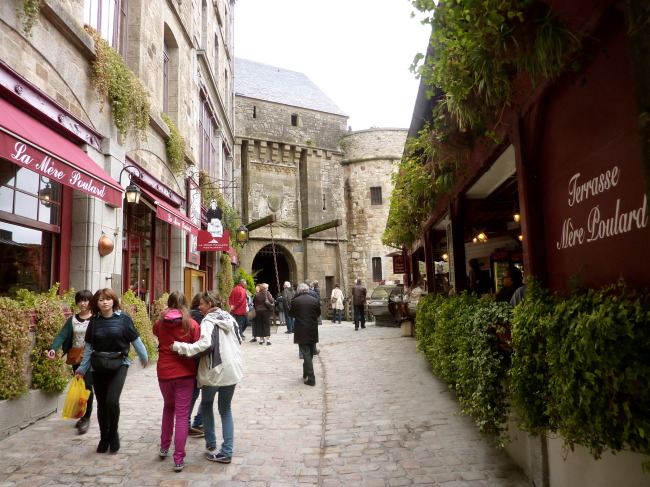 Instead of salt water, MSM is surrounded by silt water, which certainly takes away from some of the beauty, but MSM is still something to behold in person. 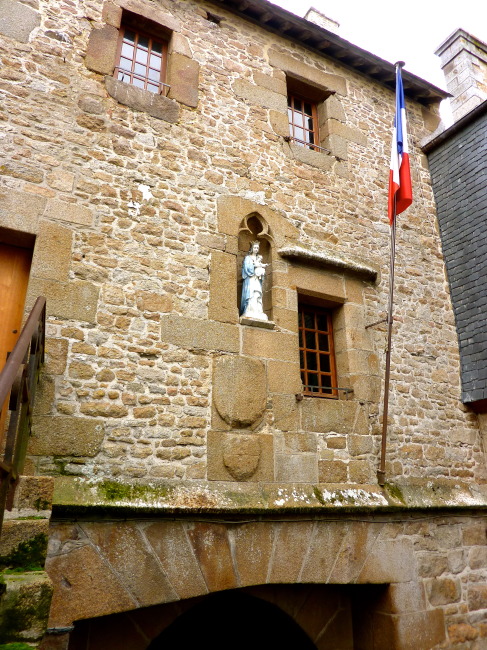 Fortunately, the causeway allows tourists to avoid quicksand on the way to it. 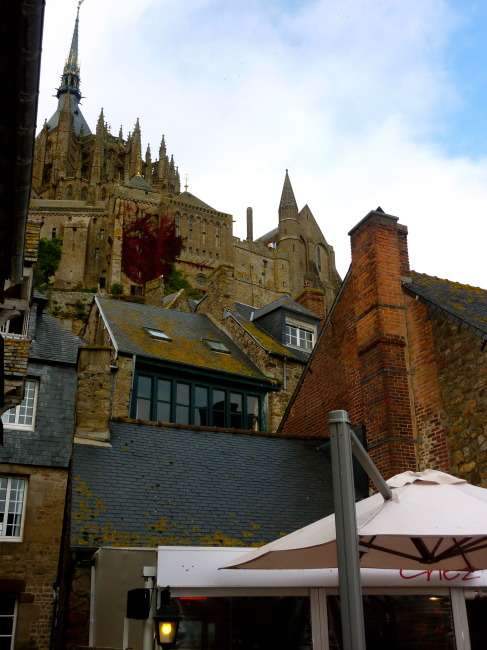 I was here to pay homage to my guardian angel St. Michel (aka Michael), who paid me a few visits in the hospital when I was incarcerated two years before. 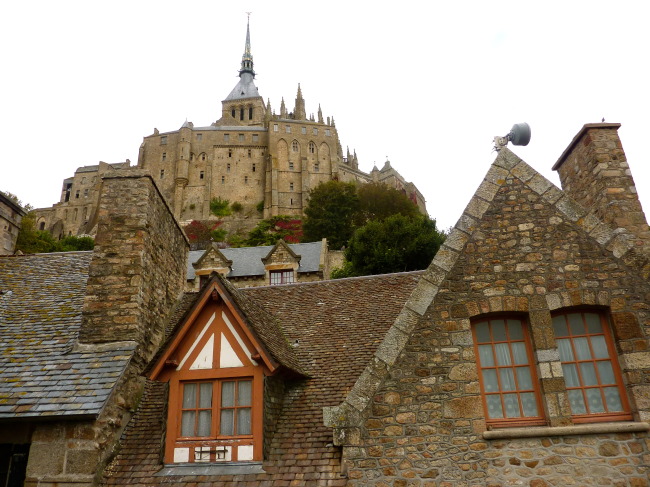 I wanted to thank him for not holding it against me that I was a Presbyterian and for letting me live along enough to see San Diego State finally make (and actually win) a bowl game. 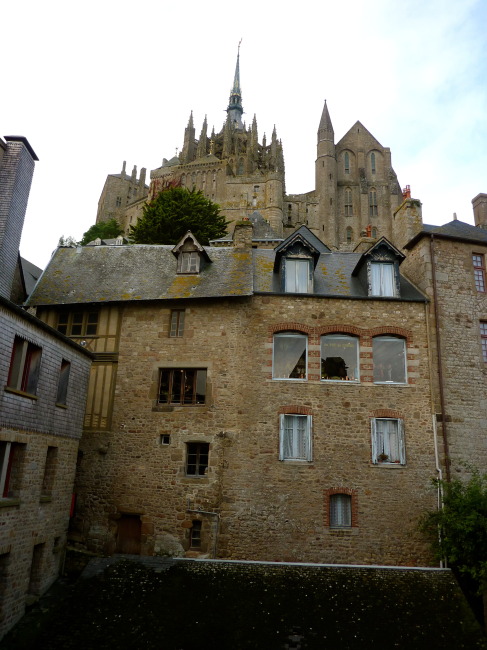 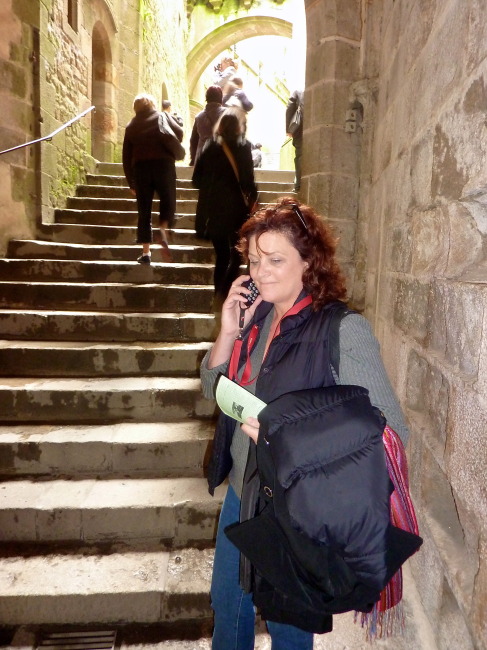 It was now time to climb the 25,000 steps (just a guess on my part) to the top and see the abbey of Saint Michel. Looking at the daunting climb, I nearly said, “Boy, we could use a good Sherpa for this climb.” Fortunately I caught Tracy out of the corner of my eye and thought better of it. 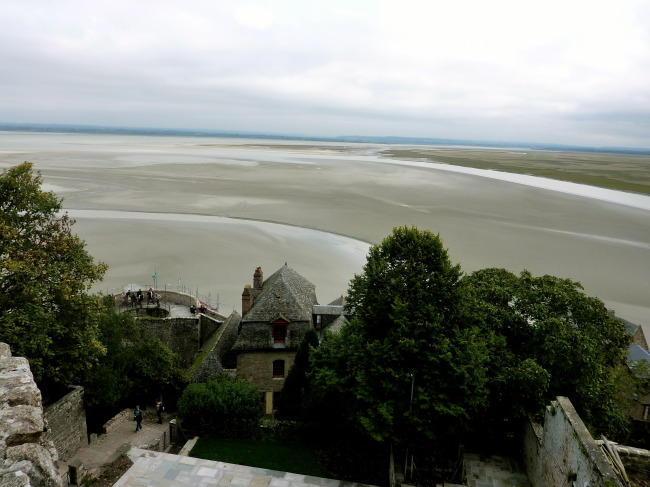 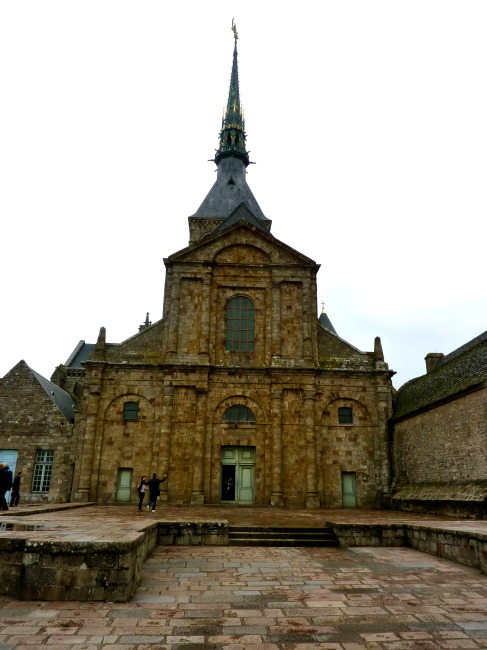 Since the abbey was the first and most important place to see, we followed Rick Steves’ tip to bypass the maddening crowds.  We climbed up the first set of stairs on the right after the drawbridge and followed the ramparts up, up and up some more.  For a few minutes, I thought I might have to call on Michael again for a little help. 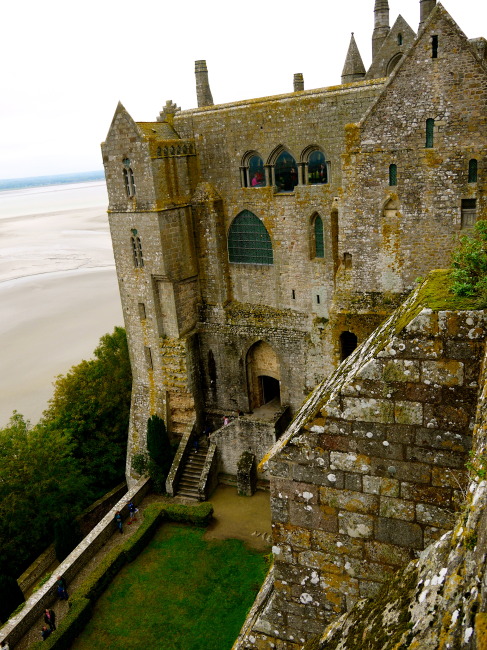 We passed by many restaurants and hotels on the way to the abbey and finally (and mercifully) we reached the abbey where we paid the 9€ (3€ extra for audio guide). 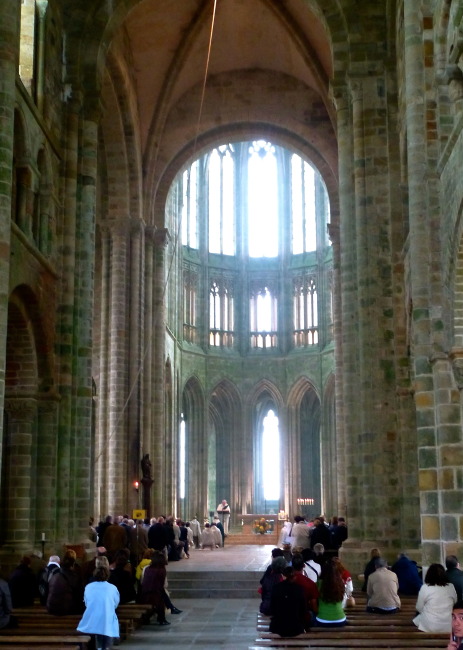 Once again, the audio guide here is a must (in my opinion) to appreciate the abbey. We got inside just as the priest was finishing his speech to the congregation. “Hey, we get to hear the Sermon On The Mont,” I said to no one in particular, and no one in particular chuckled. 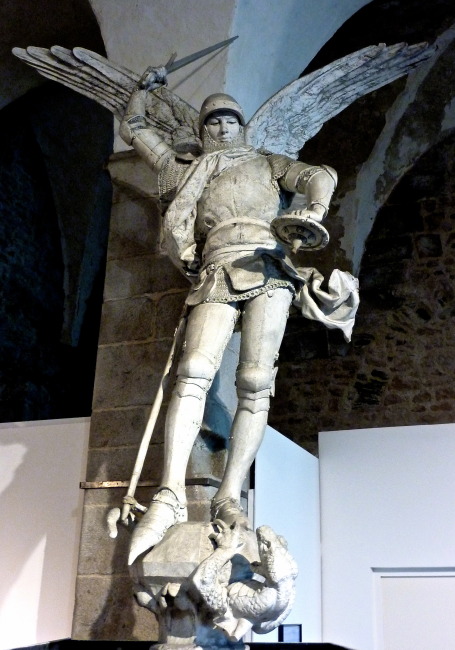 I think Michael would have liked that one however. 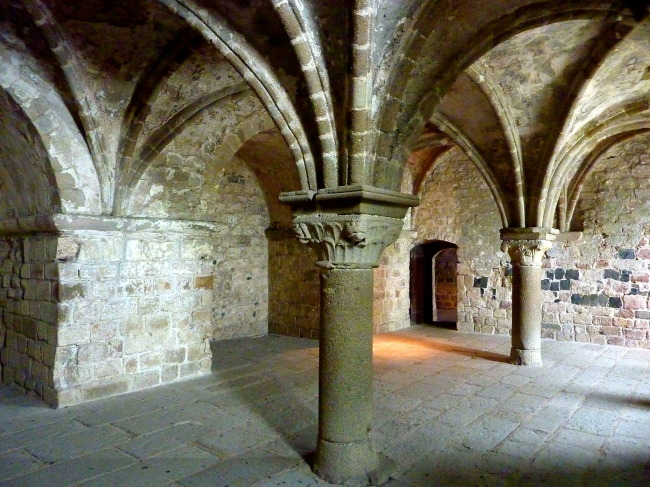 Afterward, we made our way down in the opposite direction and hit the most touristic part of MSM with a restaurant seemingly every five feet.  We stopped for a quick bite to eat, and Kim had the “famous” Mont Saint-Michel Omelette that he said really shouldn’t be famous.  I think I downed about 300 pommes frites.  Without lunch, the climb up, touring the abbey and walking back down took a little less than two hours. 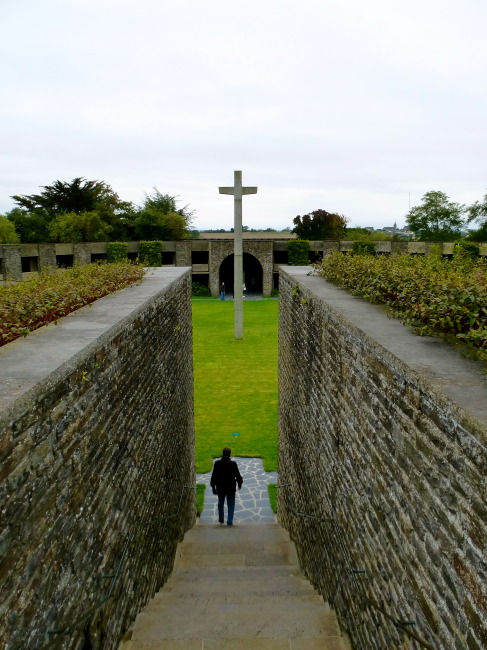 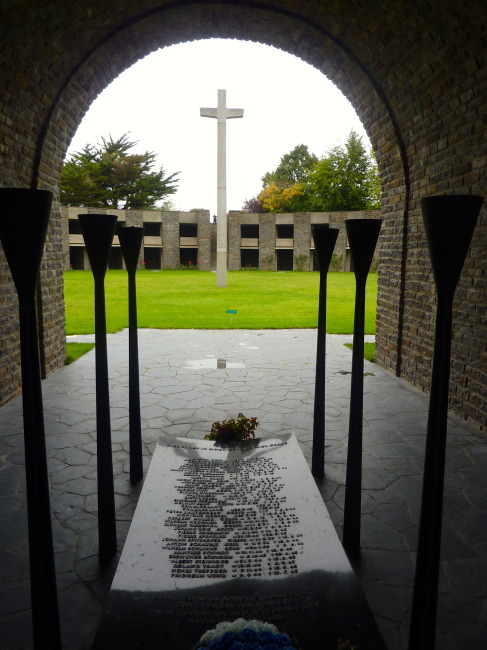 Our destination on this afternoon was Bayeux, but first we stopped at a nearby cemetery for Germans killed in World War II.  The Cimetière Militaire Allemand contains the remains of 11,888 German soldiers.  We walked through the cemetery, and there is a fantastic view out to Mont Saint-Michel. 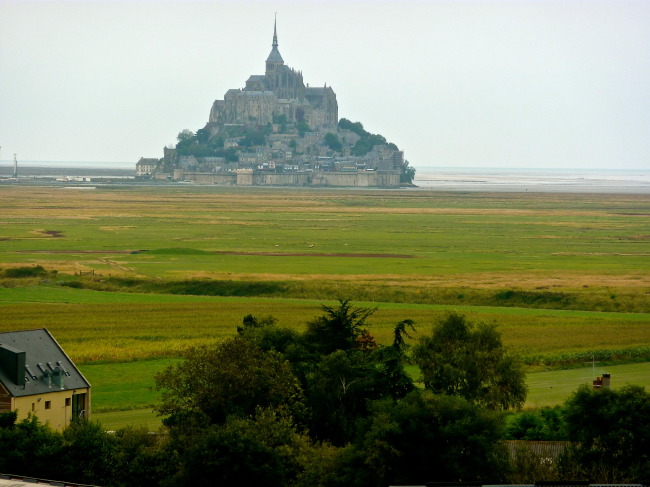 Now it was on to the easy drive to Bayeux, where we would spend the following three nights. Enough gas: Check! Madame Bleu back working: Vheck! Hotel name: Check! Address of hotel: Time to call the cats!   Due to my crack organizational skills, my info was on the dining room table, probably sitting underneath a huge hairball. 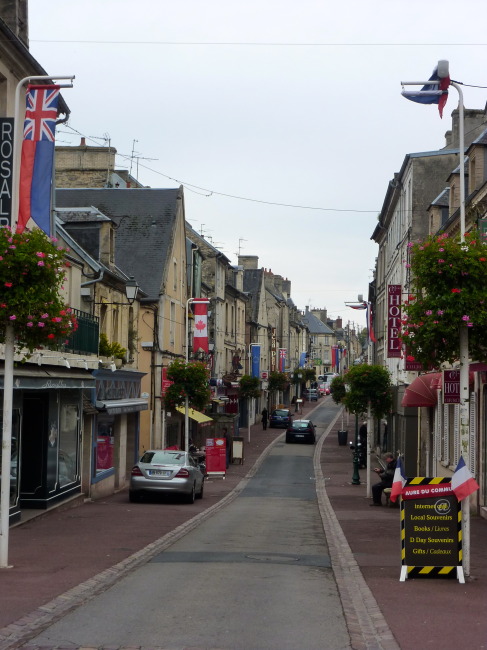 We approached Bayeux and were in search of the Hotel Chateau de Bellefontaine. I knew it couldn’t be in the center of town, because like our b&b in Amboise, this had more of a park-like setting.    Passing by the Cathédrale Notre-Dame de Bayeux, we drove a little further and thankfully the TI was still open. 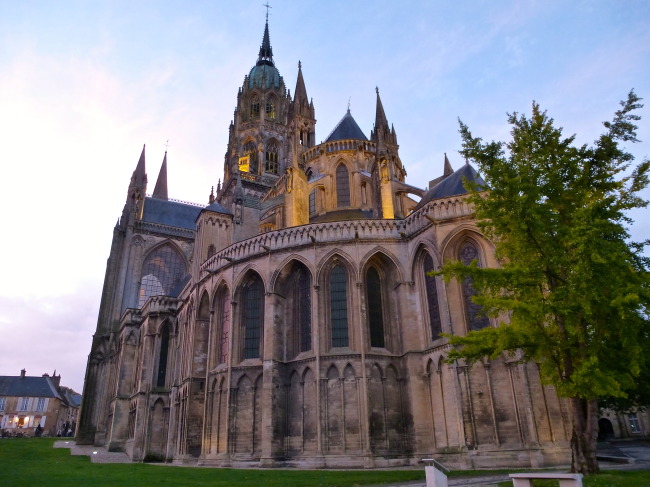 Similar to Manoir de la Maison Blanche in Amboise, just a few blocks out of the hustle and bustle of Bayeux was the oasis that was Hotel Chateau de Bellefontaine. Driving down the gravel driveway, we looked out on a beautiful setting complete with a small pond that had swans and ducks frolicking (or whatever swans and ducks do in their spare time). 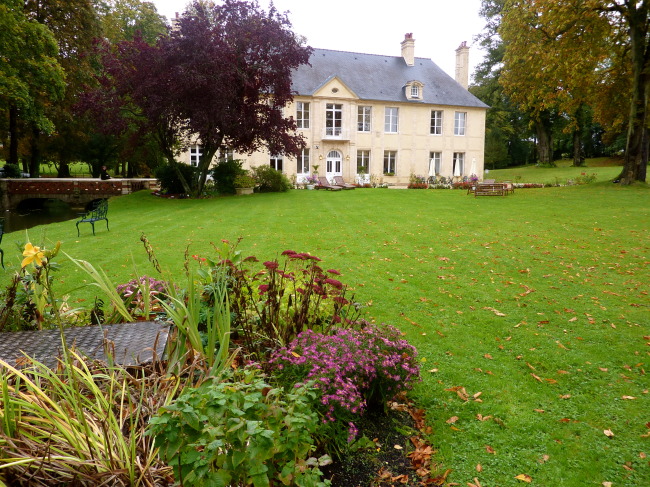 Walking over the small bridge to the hotel, we saw a flock of beautiful wood ducks. 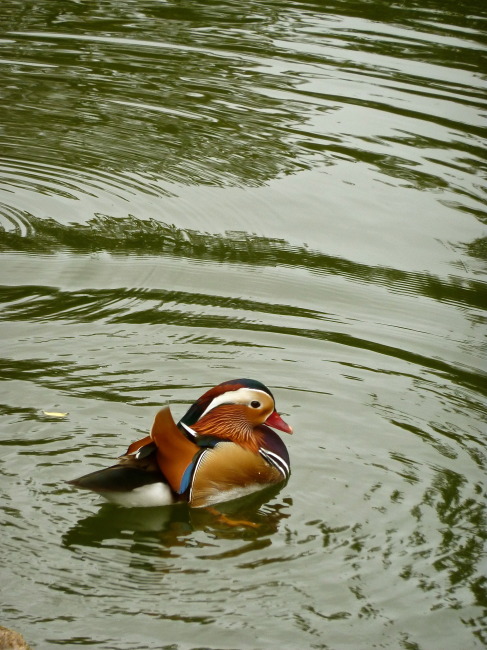 I could only think they had it so much better than their cousins back in the Dordogne. 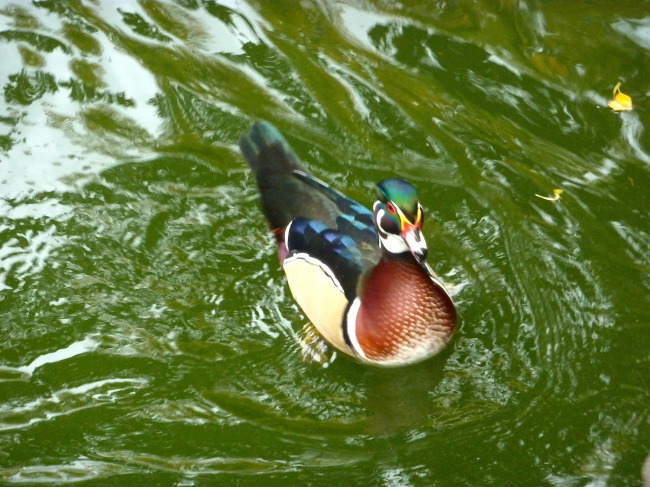 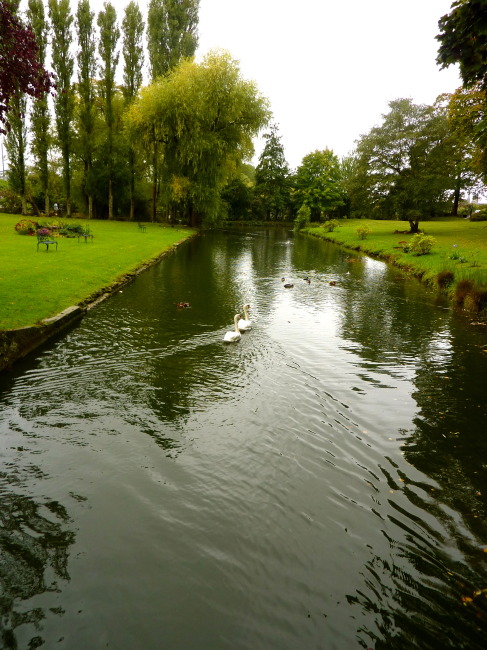 Our hostess was most cordial, our rooms were spacious and this was another terrific spot to plop our bodies down for a few nights. As usual, we toasted our good fortune with a bottle of wine before we headed off to town for dinner, and just like Amboise, we would get our exercise to and from our meals for three days. It was about a 25-minute walk to the center of Bayeux. 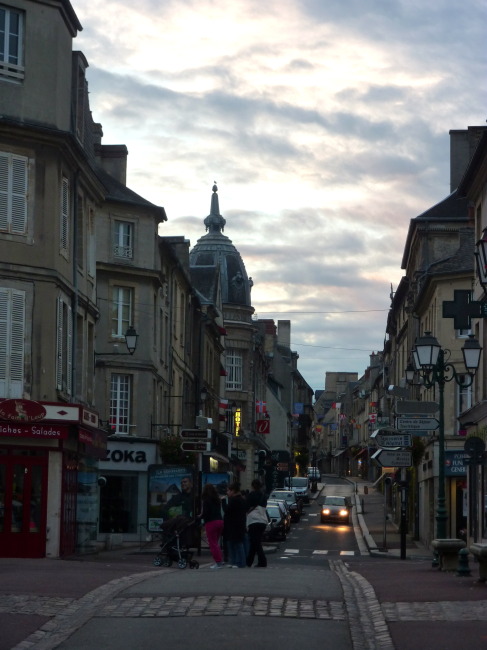 Being a Sunday night, the night where seemingly no one in France eats out, we walked down the main drag until we saw an inviting restaurant (aka one that is open), La Table du Terroir.  This is another restaurant that gets fairly crappy Trip Advisor reviews, but I think Trip Advisor is wrong as often as it is correct, and tonight reaffirmed my view. 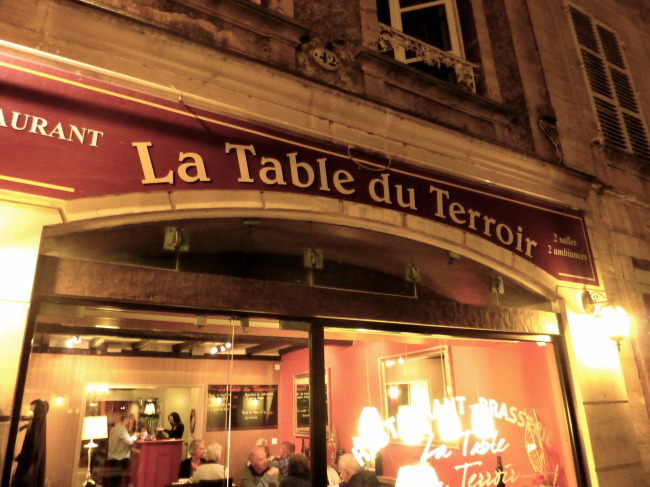 The service was very, very professional and nice, and the food was quite good. We all started with a Kir Normand (Cassis and Calvados).   Kim and Tracy each had vegetable soup and pork, while Mary had a salad with gizzards (no wood ducks fortunately) and salmon. 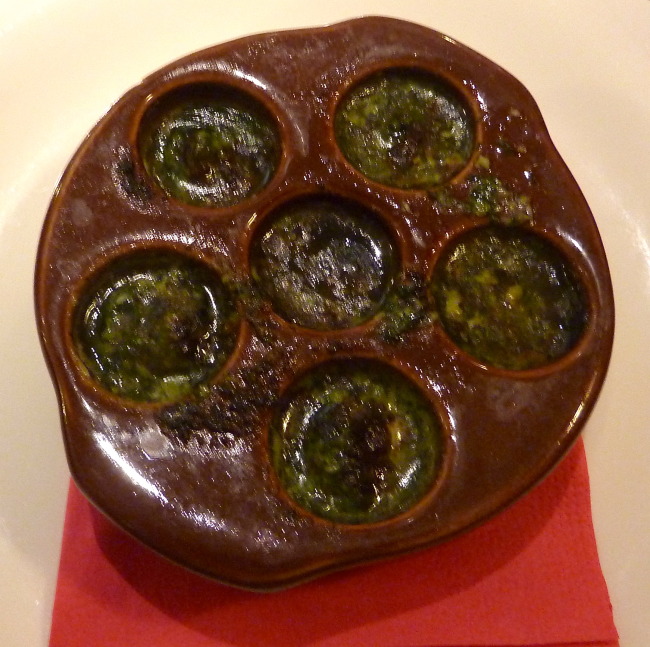 I started with escargots that I ate at a snail’s pace, which, of course made me sluggish (it just wouldn’t be a France trip report without that oldie). I then dined on a nice beef dish. We washed all this down with a 14.50€ carafe of house wine. The bill came to, what else, 120€. 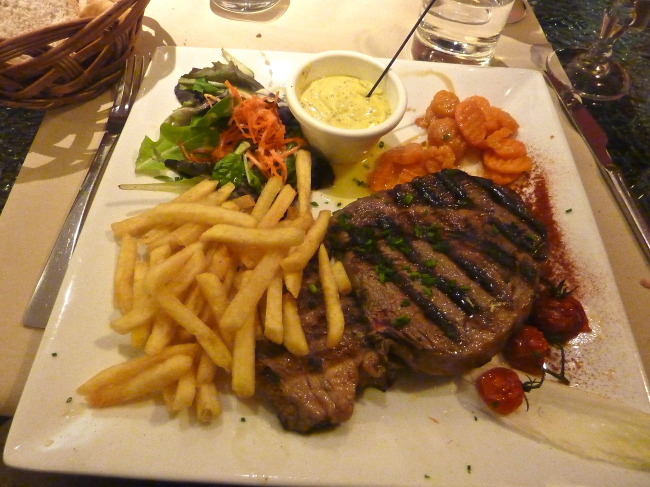 On the way back to the hotel, Mary suggested a route that seemed very Madame “Bleuish” to us, but we let her lead the way (I blamed the Calvados). Yes, we had gone in a direction that took us completely out of the way, but my bloated body size certainly needed the extra exercise.   Back at our hotel, the wood ducks were illuminated in the moonlight in our tiny pond, and we attempted to shoot some photos without falling into the water (a literal swan dive). Since all our photos sucked, I blamed the Calvados.

It rained for much of the night, and the sound of the drops against the window was quite relaxing. We could even sleep in a little bit the next morning on a day that we would see a beautiful cathedral, my favorite tapestry, an incredible port and a 360-degree, birds-eye view of what it was like to be in France during World War II. 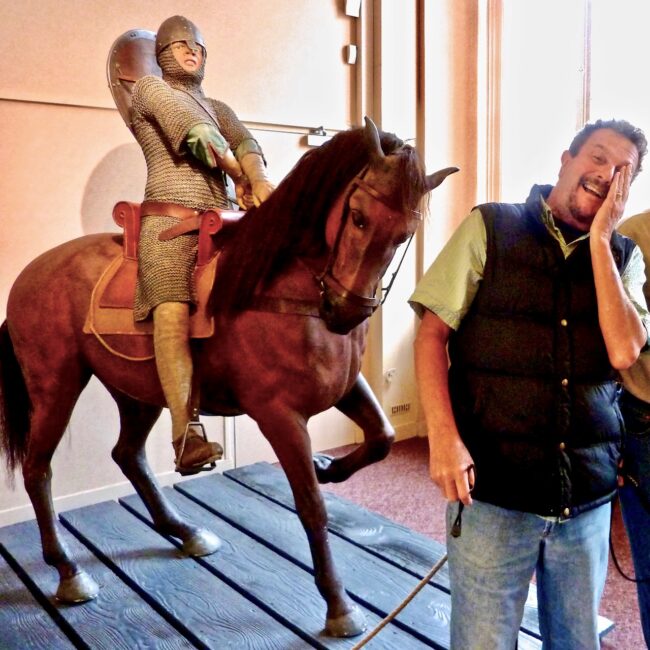 I would also have to keep an eye out for trouble.

Next: Day Fourteen – I’m From The United States…of Canada, An Astounding Cathedral, My Favorite Tapestry Minus Carole King, What A Way To Go, Any Port In A Storm Of War, A Senior Moment, D-Day 360, Honoring The British and Perhaps The Best French Onion Soup…Ever