CHAPTER FIVE: THE FOOLS ON THE ROYAL HILL

CHAPTER SEVEN:  SAVING THE BEST FOR LAST IN MONTRÉAL 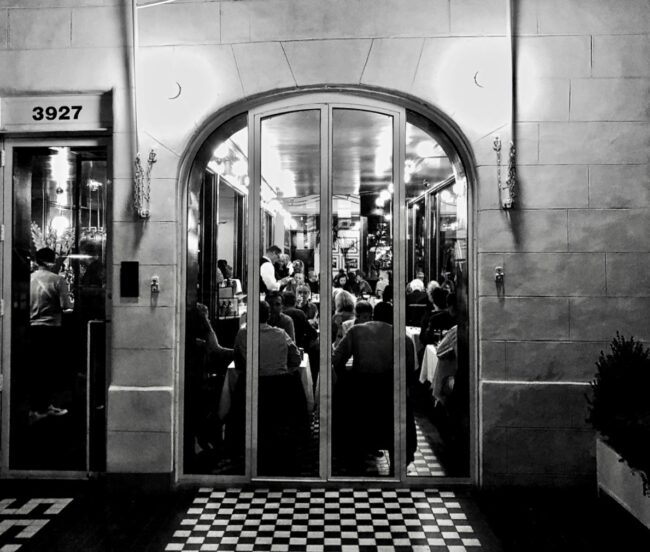 While planning the Montréal portion of our trip, there was one restaurant I desperately wanted to try. 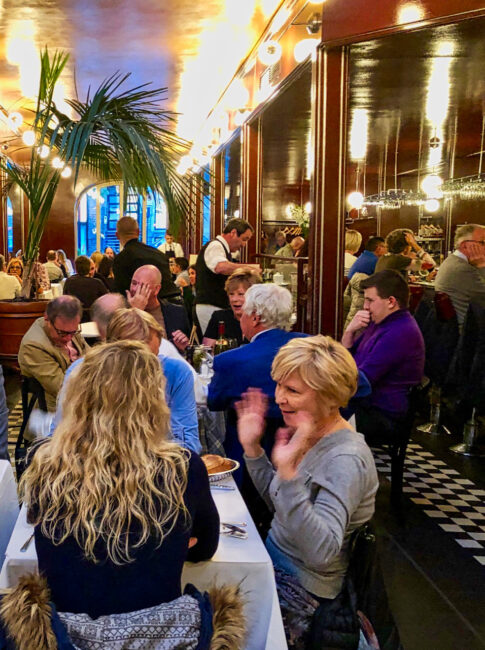 I am not usually one to follow food critics, but in my research I did find it interesting that noted Montréal Gazette food critic Lesley Chesterman gave L’Express four stars (out of four) in 2016, something she had very rarely done for any restaurant (the last one receiving four stars at that time was in 2011 for Joe Beef). She once said that Montréal would be “unimaginable” without L’Express.

I’m also a sucker for historic restaurants (see Hollywood’s Musso & Frank Grill in Tom’s Dining Out), so L’Express intrigued me.  Although L’Express has the feeling of a very old restaurant, it’s not quite as old as one thinks. Pierre Villeneuve, who started the restaurant (along with Colette Brossoit) 40 years ago in 1980, said, “At the beginning, we wanted people to think that L’Express had been there since 1950.”

Entering L’Express (which has no sign on the outside … I guess the name is written in front on the sidewalk, which we missed completely), is like stepping back in time. I almost expected to be greeted by a white-suited maître de.  The bar runs alongside one side of the narrow space with the 66-seat dining room occupying the other side.  With the black and white checkered floor and tables covered in white linens, L’Express has the feel of a Parisian bistro café.

In a recent NY Times article, it said that patrons and staff often speak “Québécois French.”  A lawyer who has eaten at L’Express since its opening in 1980, said, “It’s like a French brasserie, where they speak in Canadian.”

Our waiter on this evening was Yves who has been with the restaurant for 30 years. He was wearing the traditional “uniform.”  Villeneuve once said, “That is the thing that is closer to France, the uniform … But you have to be nice, not like a French waiter.” Yves was very nice (as has been our experience with most of our servers in France).  The creamy yellow walls of L’Express are covered with group photos of the staff taken every year. 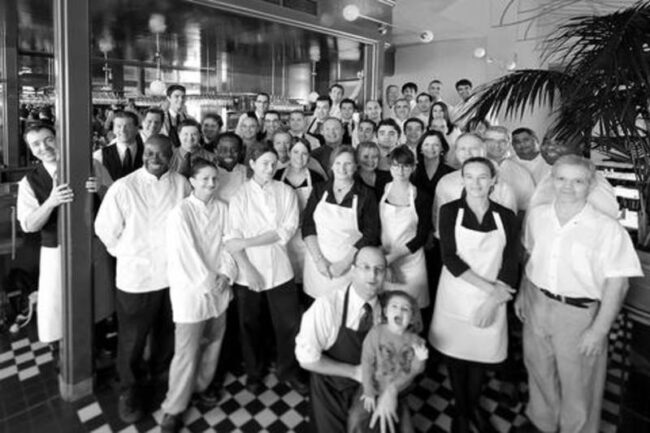 At each table, a big jar of house-made cornichons sits alongside a basket of fresh bread and a small container of Dijon mustard.  I am an avowed pickle hater, but reluctantly tried ONE of the cornichons and grudgingly agreed they were good! 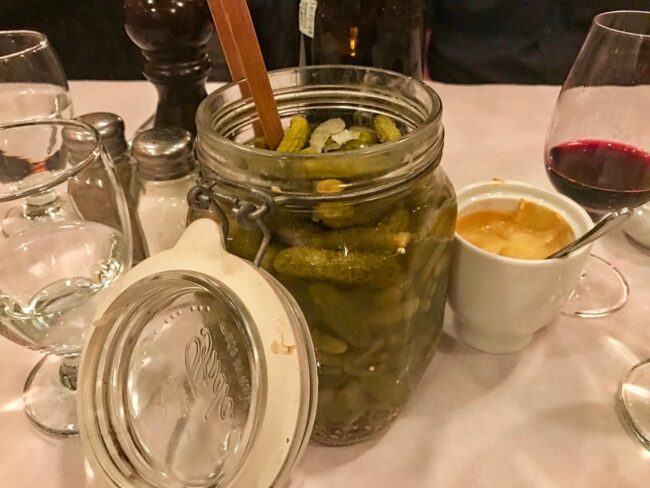 In addition to the specials, L’Express offers comforting French classics such as confit de canard, duck foie gras, Croque-Monsieur and baba au rhum (I should have ordered one of those).

After pouring over the menu and consulting with Yves, I kicked it off with a “Wow!” appetizer of chicken liver pâté with pistachios ($15).  For my main course, I ordered the steak tartare with crispy fries ($27.75). I’m the rare person who loves steak tartare (photo from internet.) 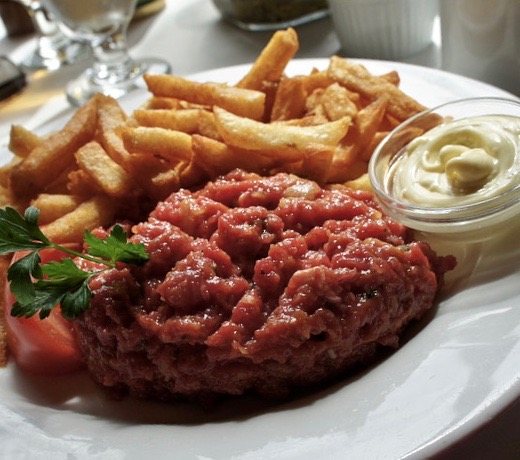 Tracy started with the roasted beet salad ($11.75) followed by the raviolis de Maison, beef and spinach with mushrooms, veal broth and sherry sauce ($21.75).  Both of which were delicious. 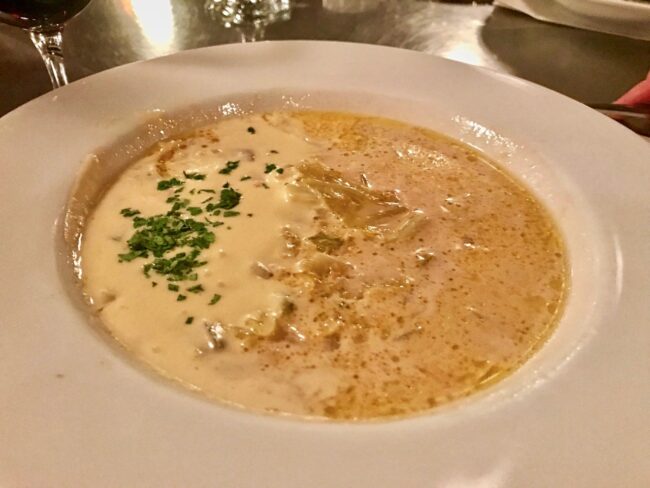 Mary ordered the Huitres Trésor du large (6 oysters, $18) and the special Escalope de Veau de Lail; veal scaloppini on mashed potatoes, ($28.55).  Mary declared the veal a Wow! dish.  After tasting Mary’s veal, Tracy asked Yves if there was any way we could get a reservation for dinner the following evening.  Yves pointed to the maître de and wished us “bonne chance.”

We passed on dessert (kicking myself over that … waistline be damned) and went to beg for dinner reservations the following evening, which was to be our last night in Montréal.  There were no table reservations available, but we did manage to score 8:30 p.m. reservations at the bar (Tracy and Mary are quite persuasive), which seats 15. 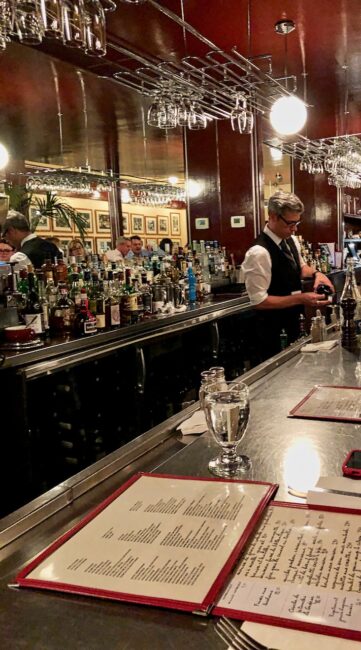 The following evening, after a stupendous day starting with a morning tour of Basilique-Notre Dame and then exploring Montréal Jardin Botanique (including a fantastic evening lantern festival) and Le Stade Olympique (see next chapter), we were greeted by Yves, who remembered us from the prior evening (hopefully he had nice memories of us). 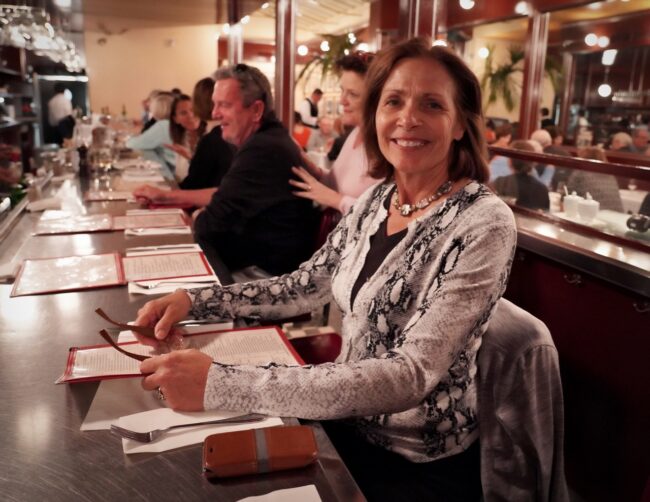 Everyone seated at the bar was dining (it seems that many bars in Canada are for eating, not drinking).  Our server was Matthew who was also doubling as the bartender.  Matthew told us that the staff rotates positions to keep it interesting. 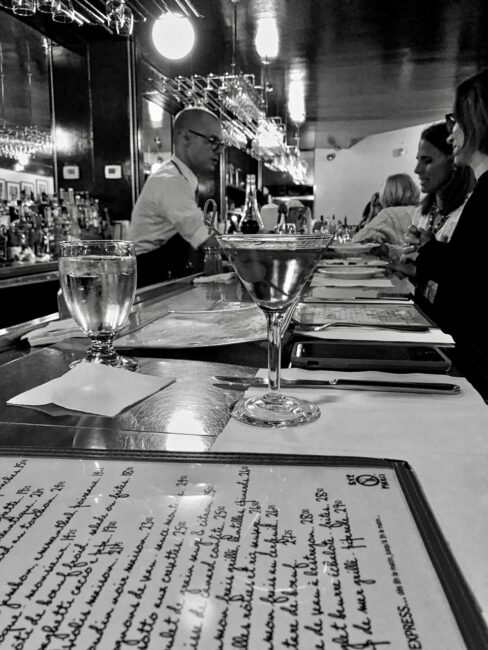 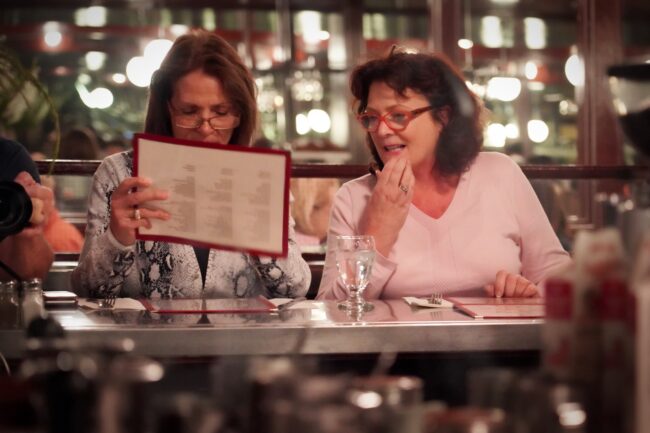 I started with the soup special Velouté de Volaille et Légumes d’automeue (delicious) and the Spaghetti Cacio e Pepe ($19). I’ve yet to meet a Cacio e Pepe I didn’t like. Tonight was no exception. 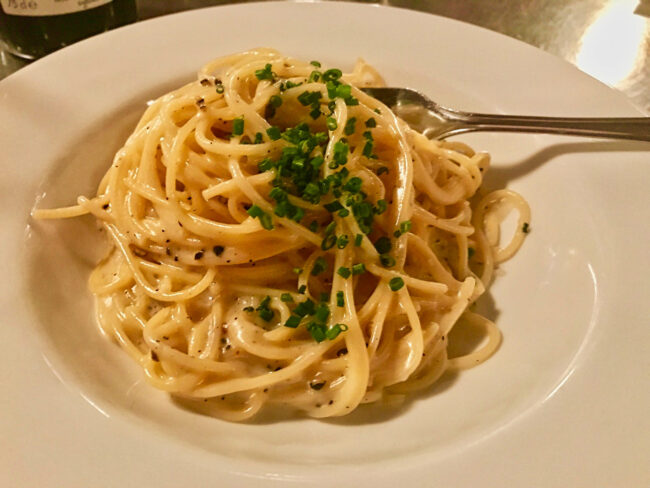 Tracy opted for the warm goat cheese salad ($14.25) followed by the special Escalope de Veau de Lail both of which she enjoyed. 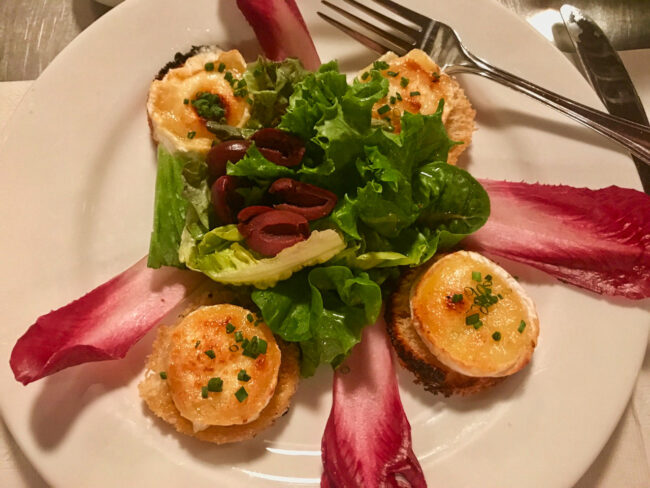 Mary went old school with a Parisian bistro staple, celery remoulade ($8.50) and, in a surprise move for our fish loving friend, ordered the hanger steak with shallot butter and fries ($28.50).

Just in case Mary changed her mind, Kim ordered the grilled salmon on spinach and lentils ($26.50). 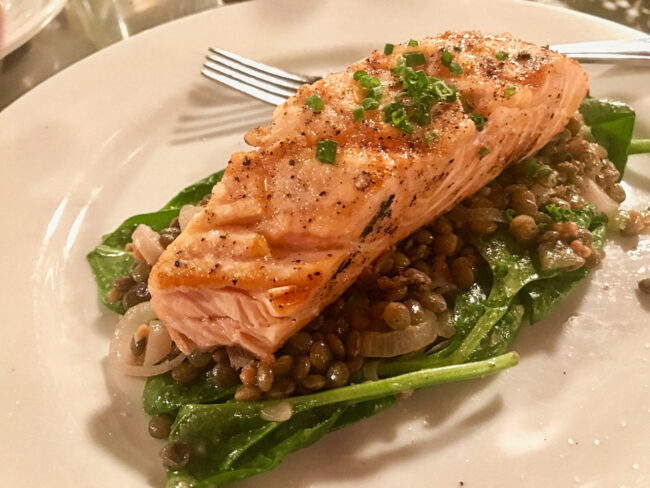 We looked at our Fitbit, which showed us we had walked 13 miles!  Time for dessert with no guilt.  We shared profiteroles with maple syrup ice cream and crème anglaise ($10.25).  Wow! The maple syrup ice cream really takes this dessert to an entirely new level.  This was not the only time we were wowed by a maple dish in Canada… they love their maple. 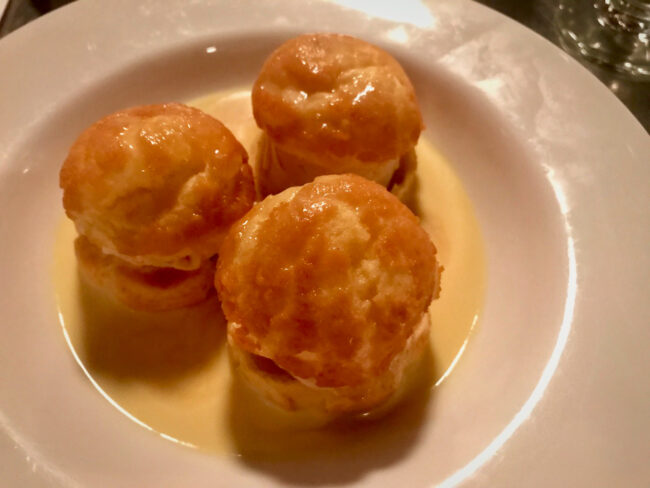 Before leaving, Matthew brought us four of the darkest chocolate truffles I have ever seen.  Kim ate one for his heart health, but we did not have room, and Mary wrapped them up for later. 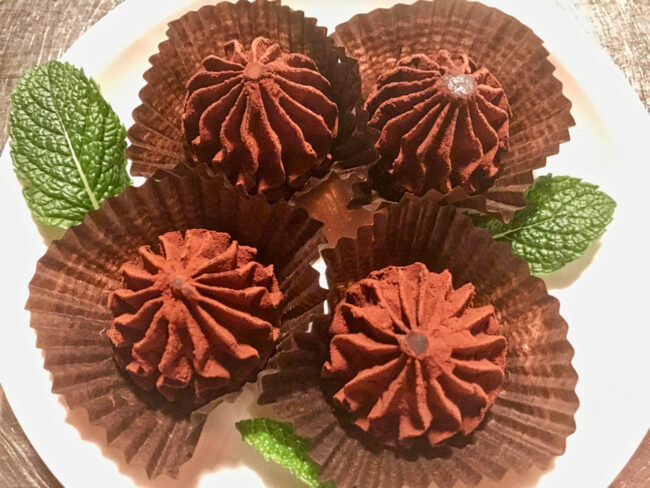 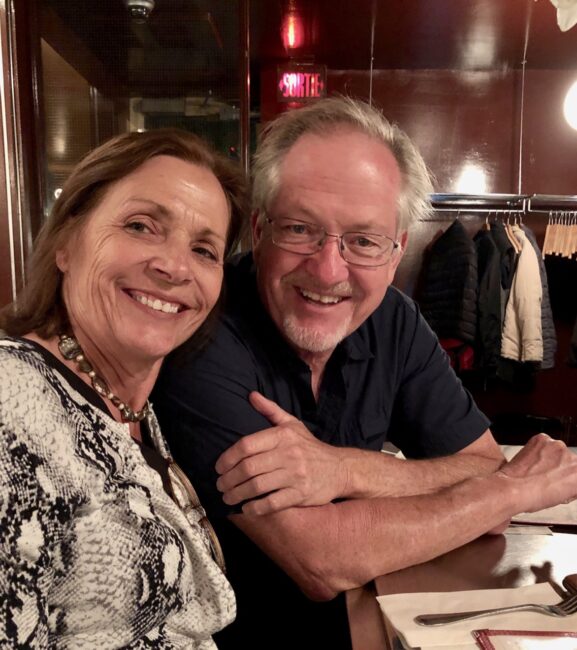 Overall, we were very impressed with L’Express from the moment we stepped inside on our first night dining there. I’m sure there are plenty of Montréal restaurants with more innovative cuisine, but if you want some old-school ambiance and elegance combined with a pretty terrific meal, you have to try L’Express. Merci!

Next: CHAPTER SEVEN – SAVING THE BEST FOR LAST IN MONTRÉAL 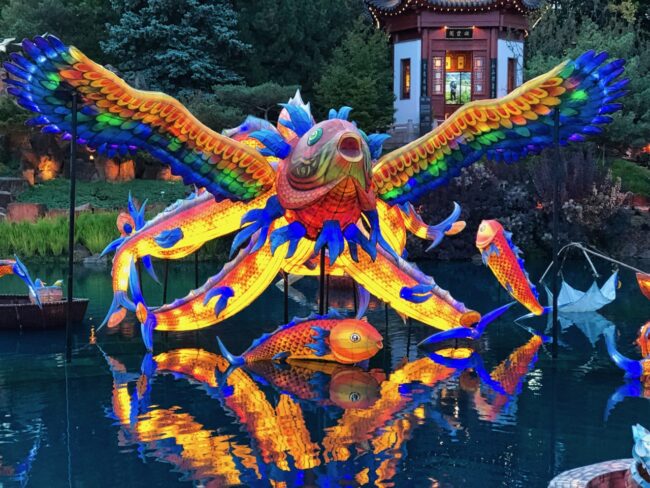 Day Five – Stunning Interior, Why Didn’t We Bring Mittens?, Magnifiques Jardins, Are You Sure The Show Tonight Is Here?, Trying To Find The Stadium, Lighting The Torch, A Jardin All To Ourselves and A Light Show For The Ages