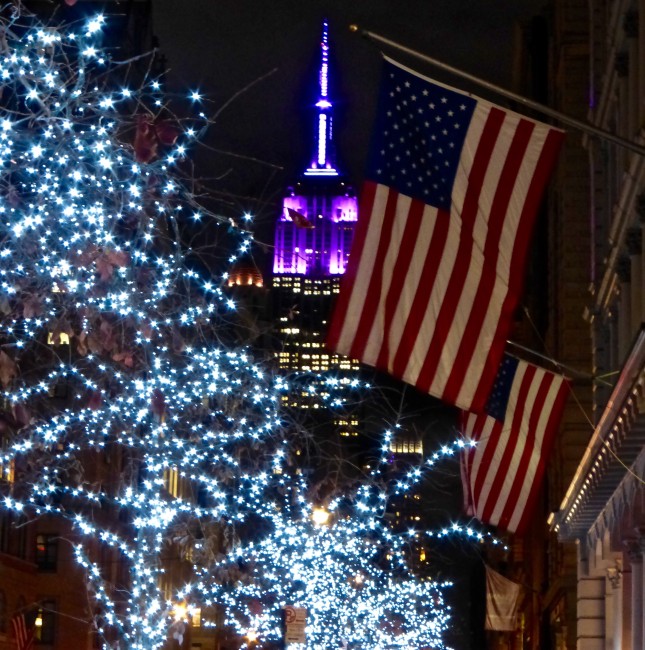 Chapter One: NYC…Here We Come!

Ever since we returned from our 2011 trip to New York City, Tracy and I had been yearning to return to one of our favorite places in the world. When we received an alert that Virgin America had an affordable airfare, we jumped on it. Our same hotel from 2011 (Chelsea Pines Inn) had availability for our dates the week before Thanksgiving, so it was off for another adventure in the Big Apple. After taking out a mortgage on our house and selling our pets (ok, we wouldn’t really do that) in order to pay for NYC dinners (and $21 martinis), Tracy and I were ready to roll.  New York City…here we come! 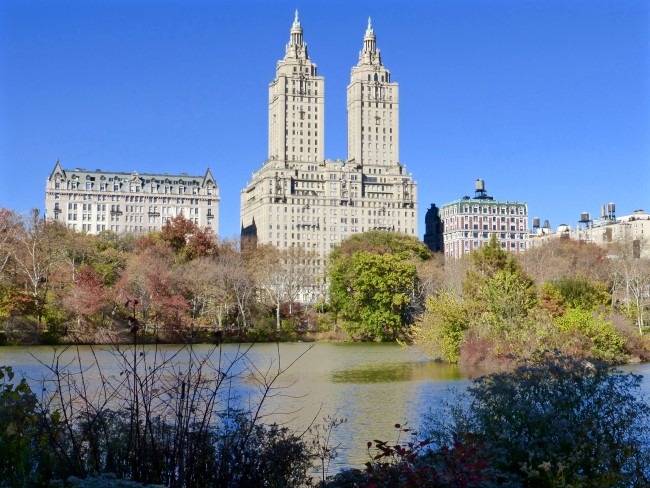 DAY ONE: The Curse Of Paris 2014, Where’s Tracy’s Suitcase, This Bag Seems Extremely Cold, Damn Yankees, The Bruce Wayne Martini, Tracy And I Visit A Strip House, Is That Bacon Or A Steak, Esma Rocks, That’s Why The Lady Is A Tramp, Half Baked and The Color Purple

Waking up at 3:30 a.m. wasn’t quite as hard, because we just pretended we were already on NYC time, so we pretended it was really 6:30.

The “Curse of Paris 2014,” a trip where I coughed for 12 hours straight on the way home from Paris potentially infecting dozens of Tahiti-bound passengers, reared its ugly head again. This time, however, it was the woman sitting next to Tracy on our Virgin American flight who looked and sounded like she should be in the infectious care unit of a hospital, however she was well enough not to require oxygen.  Fortunately, the flight seemed to go by quickly.

Arriving at JFK before 4 p.m., we were excited to get a quick getaway and hopefully not get caught in the really terrible rush hour traffic. My bag appeared on the carousel within seconds, so things were looking up.  About 25 minutes later, things were definitely not looking up, as Tracy and I stood there virtually by ourselves.  The carousel went round and round, and bag after bag was picked up. Suddenly there were none. Realizing this could be a problem, we went into the Virgin office to try and figure out how a bag could be lost on a non-stop flight, but it seemed it was in “Luggage Hell.”

As Tracy stood in the office, I kept my eye on the empty carousel until Tracy texted me…”It seems my bag is lost.” I walked into the office and as we chatted with the Virgin rep, a man came in holding Tracy’s suitcase. When I asked where it had been, the guy said, “It was on the carousel all the time.”  Apparently, we had America’s only invisible suitcase.

However, after grabbing her suitcase, I noticed the bag was colder than the vodka bottle I keep in our freezer. The only thing missing were icicles. I believe the handler had frostbitten fingers. It was obvious that the suitcase had not been on the carrousel but sitting on the tarmac, however channeling my inner “EuroTom” persona (aka non-angry), we merrily went on our way. 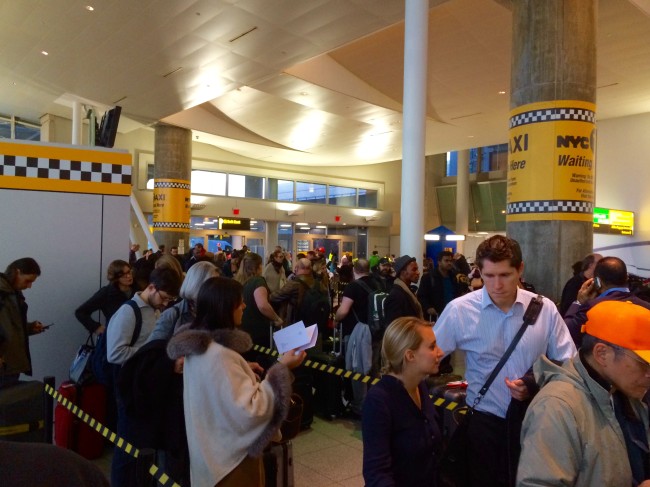 It was now past 5 p.m., and after about a half-hour wait in the taxi line, we took the one-hour-plus drive to our hotel, the Chelsea Pines Inn (317 West 14th Street). This is the same hotel we had stayed at in 2011, and we were impressed enough with that visit to make it our home for the next four nights.

There’s no elevator, but they brought our bags (one much colder than the other) to our third-floor room, which is fortunate since I have a partially torn rotator cuff, and Tracy’s back was still recuperating from a recent back injury.  Like many NYC hotels, the room is not spacious (some of the rooms would be considered quirky in their layout), but it was clean, the bed was comfortable and the shower was terrific (my most important criteria for a good stay). This hotel isn’t ranked #2 in NYC on Trip Advisor for nothing.  Plus, the staff at Chelsea Pines Inn is very helpful answering any questions you might have.

If you’re a movie buff, you’ll love the Chelsea Pines Inn.   Each room highlights a movie star and have movie posters on the walls.  Last time we were in the Sherry North room. This time we stayed in the Tab Hunter Room. 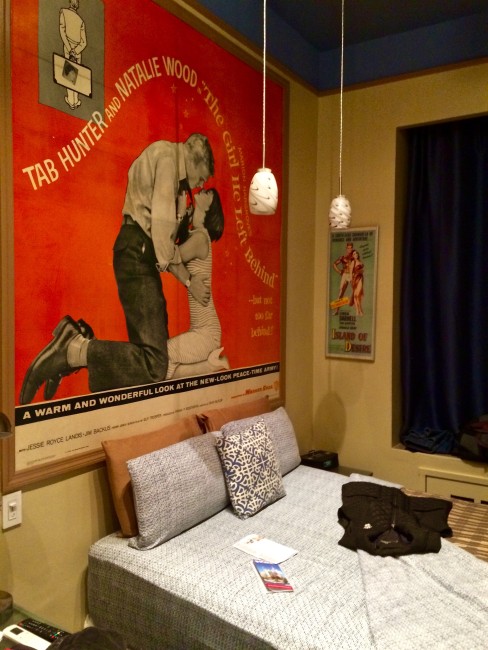 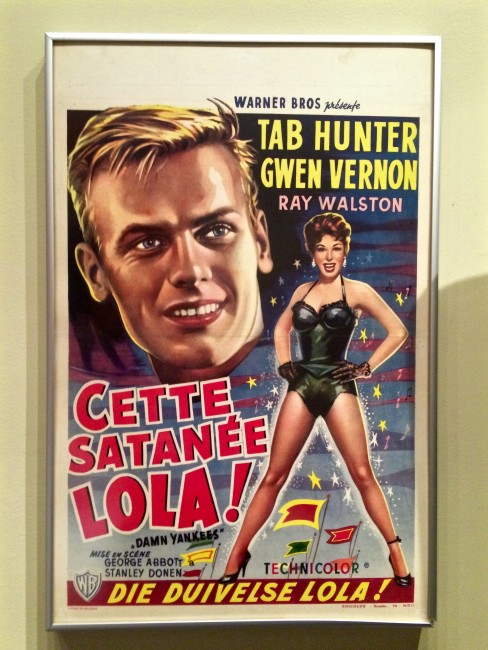 The posters (among others) included one of my all-time favorite movies, “Damn Yankees,” and a great guilty pleasure flick, “Ride The Wild Surf.” Cue Jan & Dean. 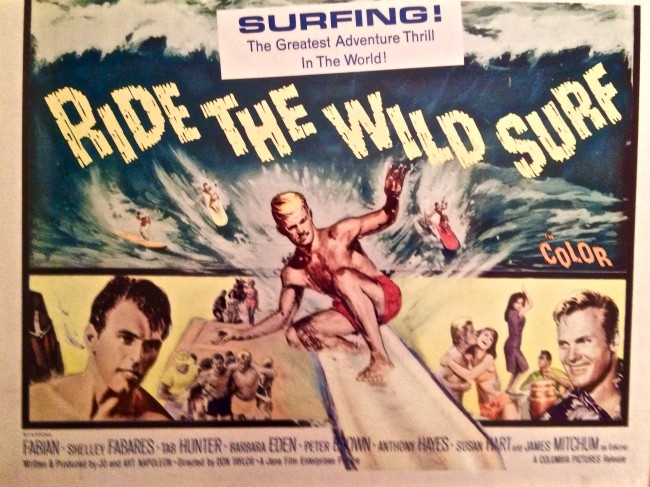 I told Tracy we had to take a quick shower, because I was going to take her to a Strip House, one without naked women (sort of).  We decided to walk the 15 minutes to the restaurant, and we arrived about 20 minutes early.  Virtually across the street from the Strip House is the Gotham Bar & Grill (12 East 12th Street).  On this Tuesday night a little before 8 p.m., the restaurant was jammed.  Tracy suggested we have a, “Welcome to New York City martini.” I told you I married well. 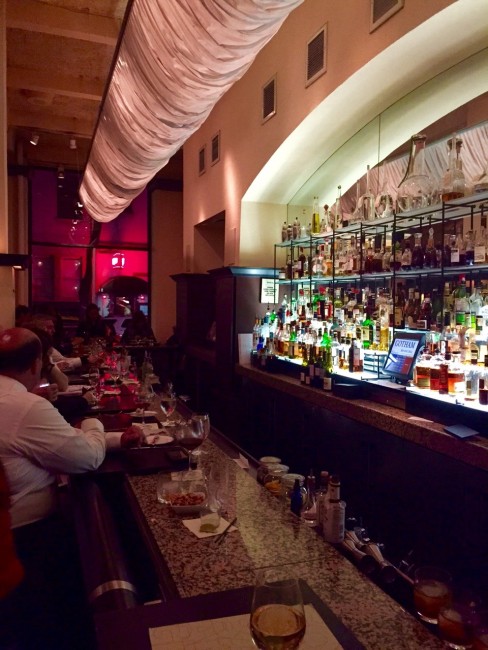 We plopped down at the bar and ordered a Tomtini (citrus vodka and a splash of triple sec…up with a twist). When I got the bill, I realized that Tracy would have to dip into her 401K for this trip ($41 and change).  Since we were sitting at the Gotham Bar & Grill, Tracy quipped, “I don’t believe Bruce Wayne cold afford to drink here.”  Holy Expensive Vodka Batman! 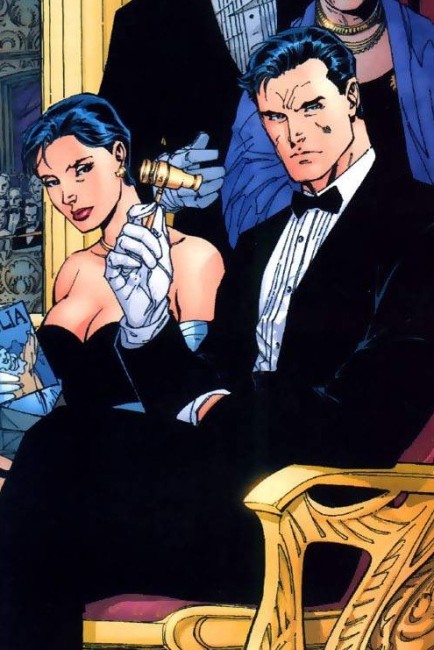 We walked across the street for our 8:30 reservations at The Strip House (13 East 12th Street).  I had desperately wanted to visit an authentic NYC steakhouse to satisfy my inner carnivore, and this place had been recommended by member of a travel board who lives in NYC. 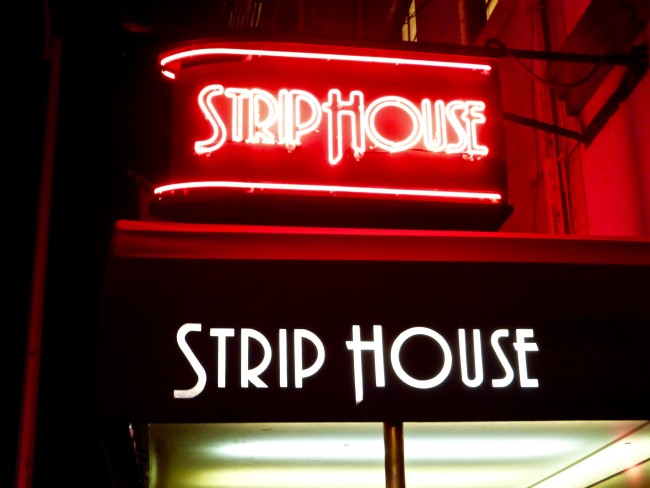 Walking inside, this is exactly what I had envisioned a NYC steak house should be like.  It was dark, and the room was red…very red. As we waited for our table (this place was also packed), Tracy and I sipped on a $17 house Manhattan (we split this one…we had to save money for subway passes tomorrow morning… not to mention my retirement). 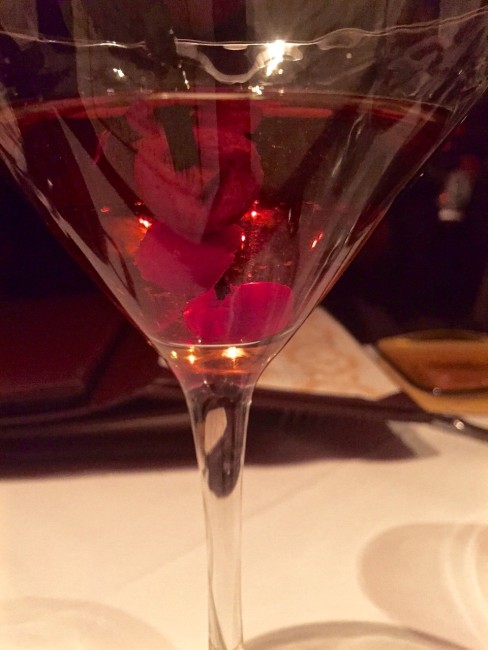 We were eventually led to our table, which was situated side-by-side other tables (foreshadowing alert). 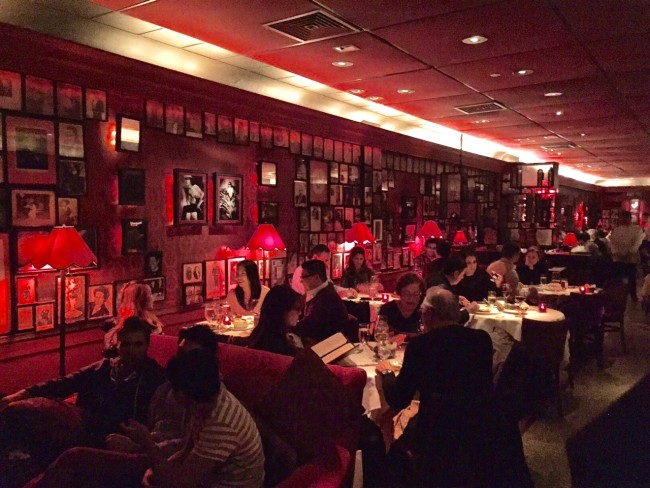 On the walls are pictures of Opera/Torch singers and strippers. It had a burlesque-house feel…and that was a good thing. Even the coasters were cool. 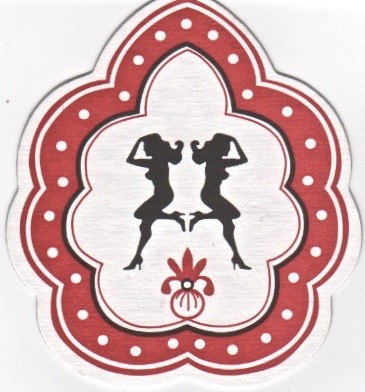 We were introduced to our server, Esma, a woman who sounded like she could have been from either the Czech Republic or Poland.  We all hit it off immediately, and we bantered for the entire evening (damn, I love New York).

Before our appetizers arrived, a basket of pretzel breadsticks and hot rolls topped with onions arrived. 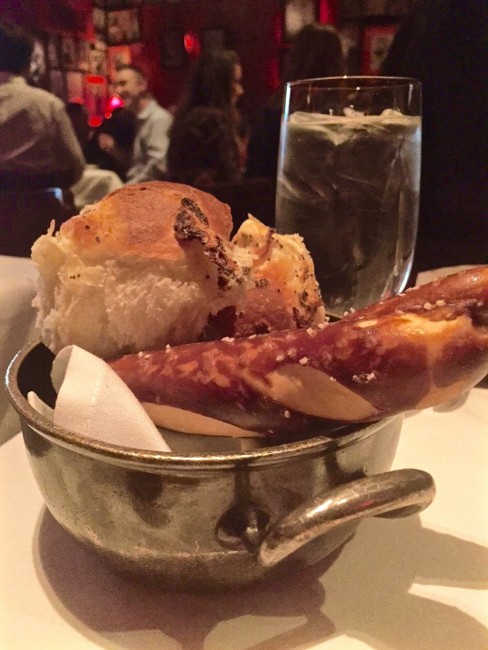 They were delicious…except for the roll I dropped on the floor.

Tracy ordered a Beet salad (her favorite) with horseradish crème fraîche to start, but it was my appetizer that defied reality (and heart disease). 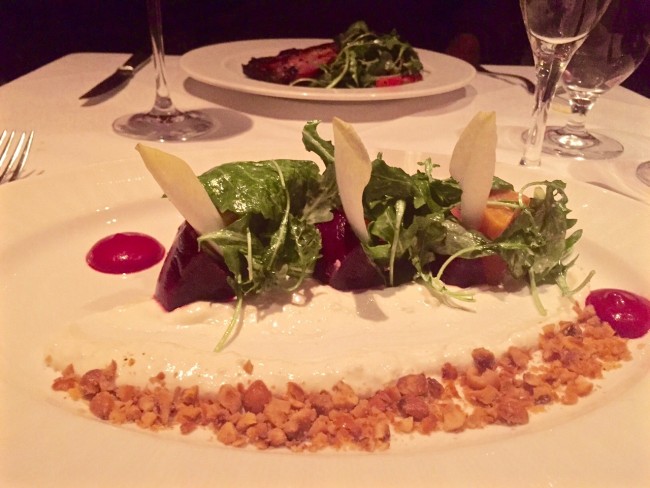 I ordered what I thought would just be a normal Bacon/Arugula salad with Russian dressing. When it arrived, I thought they had accidentally brought my steak. The bacon looked like pieces of beef. If my Jenny Craig rep was dead, she would have turned over in her grave. The dish was spectacular.  My cardiologist was informed just in case. 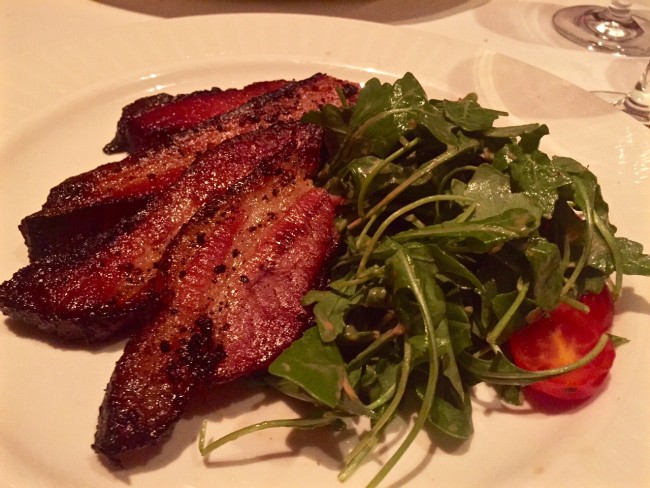 Speaking of healthy dining, for dinner I ordered the 12-ounce filet with Béarnaise Sauce (50 bucks for the steak…$2 for the sauce…defibrillator no extra charge…pun intended). The filet pretty much melted in my mouth, and the steak rested in my stomach until the beginning of Hanukkah a few weeks later. 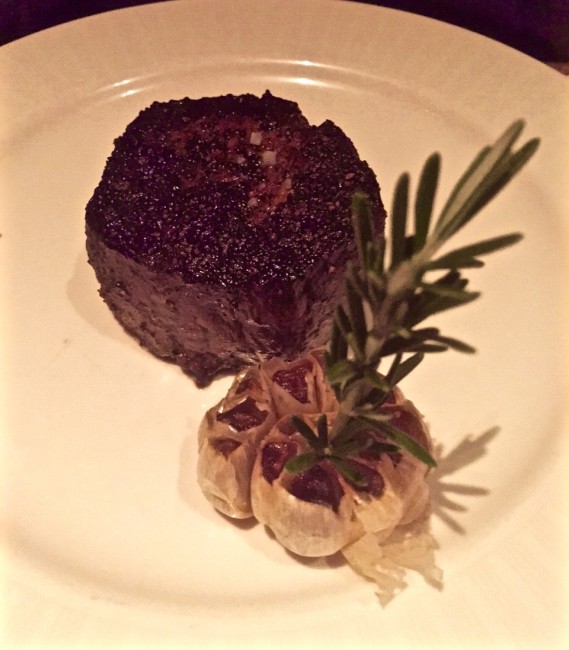 Tracy’s smoked beef short rib ravioli with mushroom sauce and mushroom au jus poured over it was good, but she thought it was a tad “too smoky.” She did bear to eat it, however. 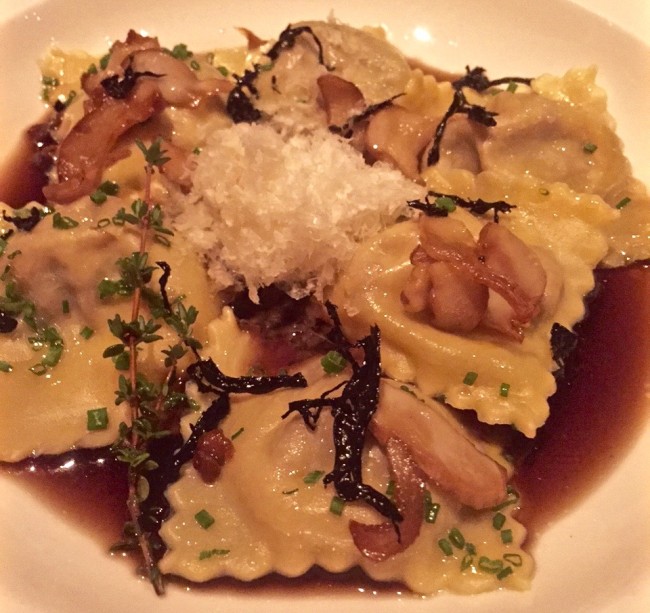 We were undecided over the black truffle spinach or spicy creamed corn with pancetta for our side dish (oh, the decisions one has to make on vacation). We finally decided on the spinach after much conversation, however Esma was nice enough to bring us both dishes, but only charged us for one (what’s a few extra few hundred calories among friends). The spinach was quite rich, and the creamed corn joined the “Wow” dish category. 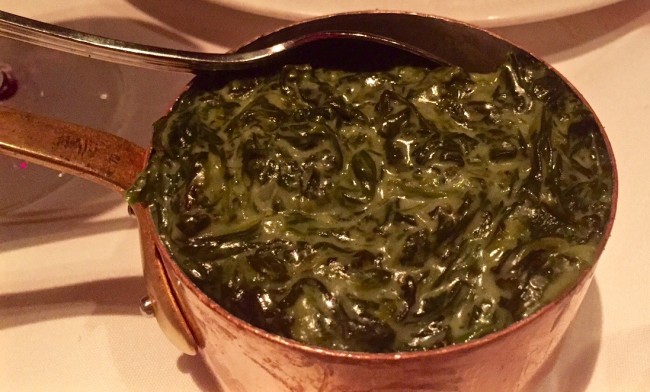 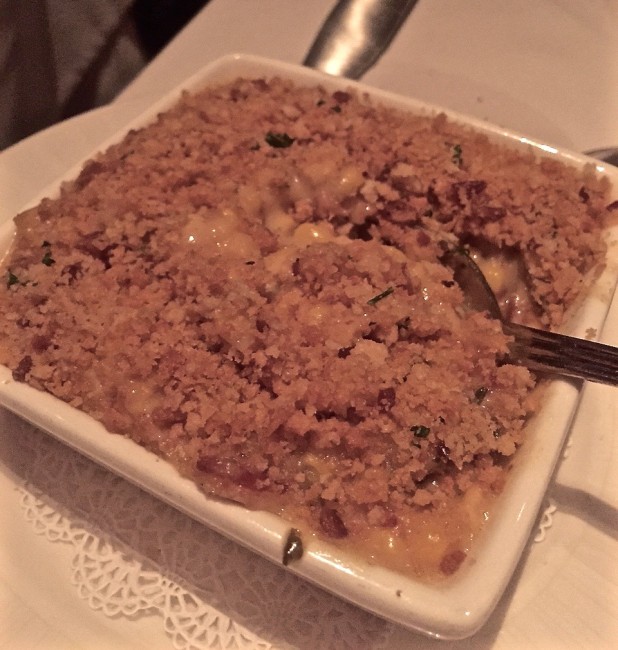 As I stated, the tables are situated very close to one another, and it wasn’t hard for us to figure out that the old geezer at the next table (he was probably five years older than me) was having an affair with his younger female companion. I think Esma liked us so much because this woman next to us was fairly (no make that, “really”) obnoxious. She never (and I mean never) stopped yapping in her incredibly shrill voice, including ordering all his food. We knew he must be married, because he wasn’t listening to her at all.

Although Tracy is not really in favor of guys cheating on their wives, she actually hoped the woman would go to the bathroom so she would have the opportunity to tell him (in her best Monty Python and The Holy Grail voice), “Run awaaaaay!” 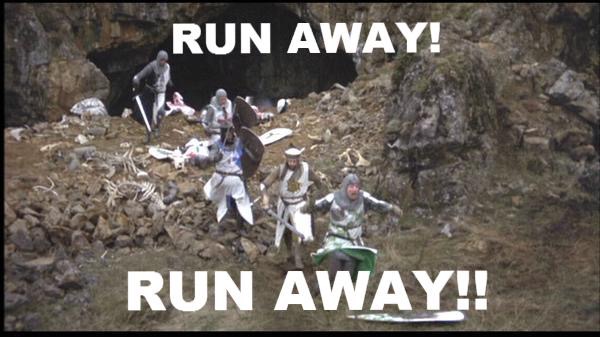 Unlike the Cary Grant movie, this seemed to be “An Affair To Forget.” I could hear Sinatra singing, “The Lady Is A Tramp.”  In any case…guys…be careful what you wish for.

Meanwhile, Esma and our busboy, the very affable Gus, were getting on famously with us, and although I had already loosened my belt, they double-teamed us and talked us into a Baked Alaska (it was not a difficult sell).   While we waited for flaming dessert, another server took me next door and downstairs to see a different part of the restaurant, complete with another bar. 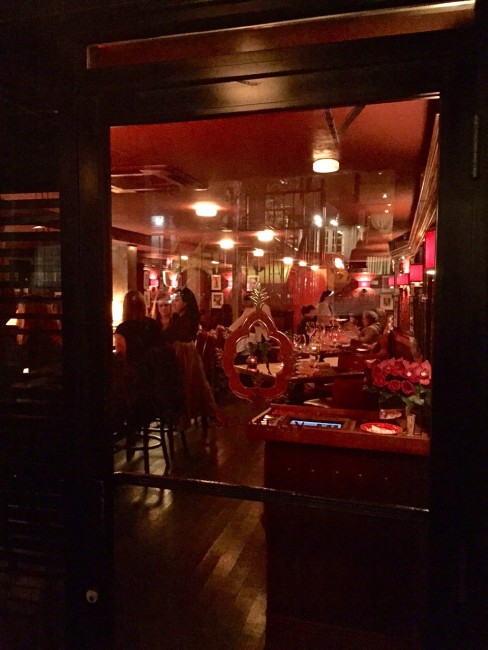 Tracy said the woman’s restroom was pretty cool, too. I took her word (and her photo) for it. 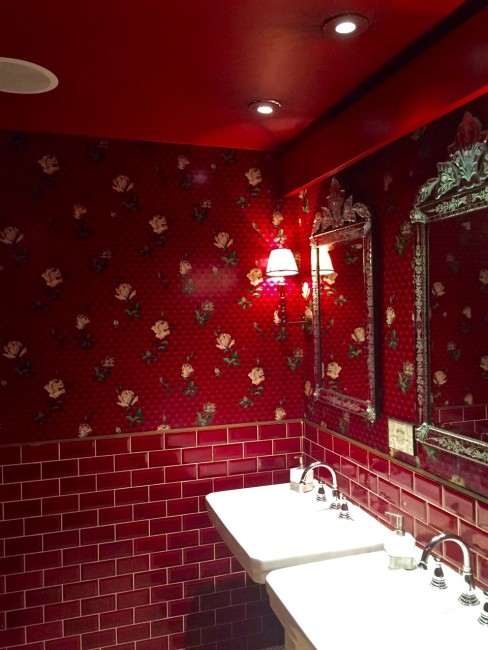 Esma told us (but I could not confirm) that the Strip House owner’s son played the piano in the movie “Big” with Tom Hanks and the late Robert Loggia. If so, this restaurant has both Heart…and Soul. 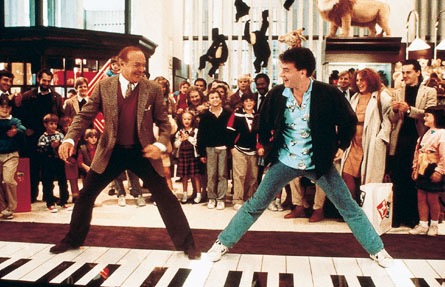 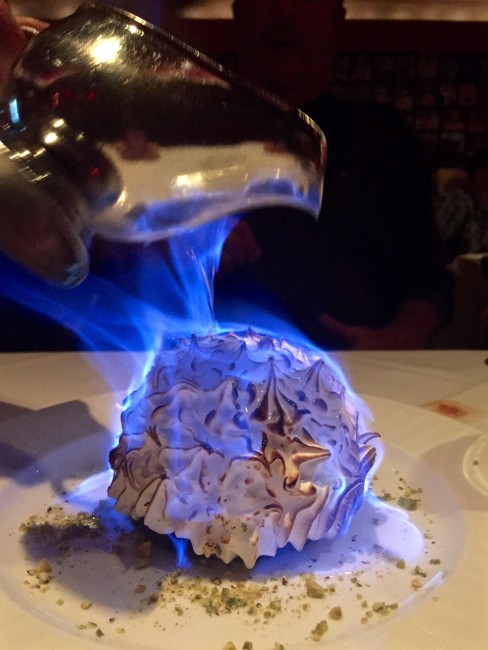 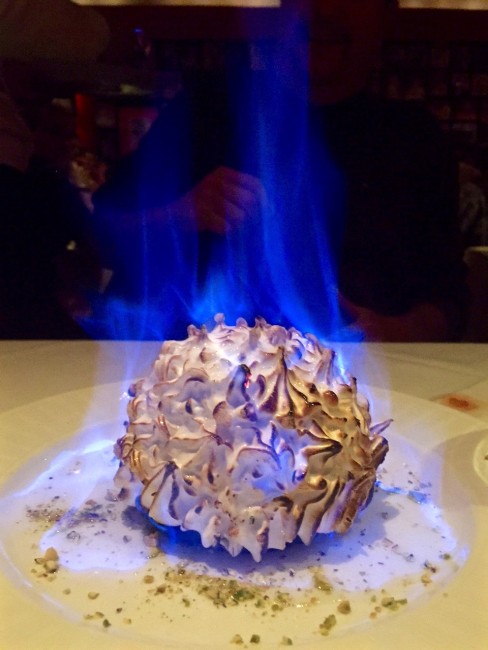 …the fire department was put on alert and we could only eat about half of the Baked Alaska as we were completely stuffed. 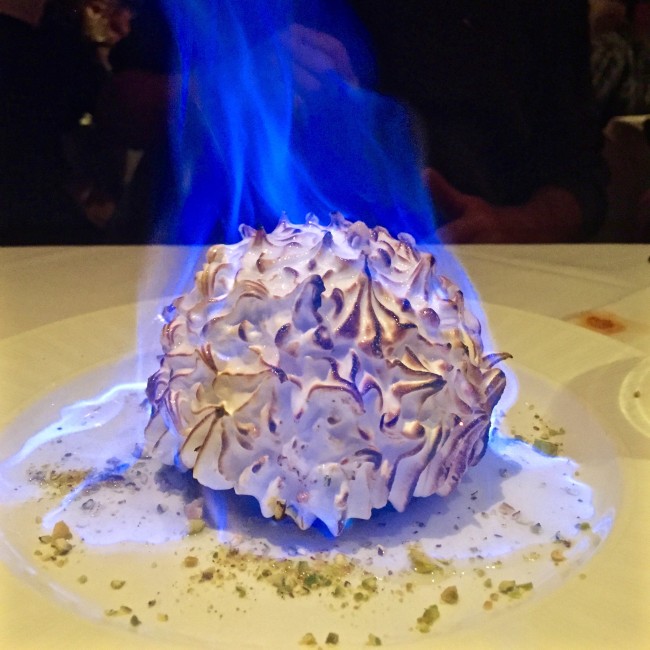 We bid adieu to Esma and Gus, and on a gorgeous NYC night took a stroll down Fifth Avenue for a bit until we caught sight of the Empire State Building…its lights shining purple.  It was either to honor World Prematurity Day or Oprah was starring in a new movie. 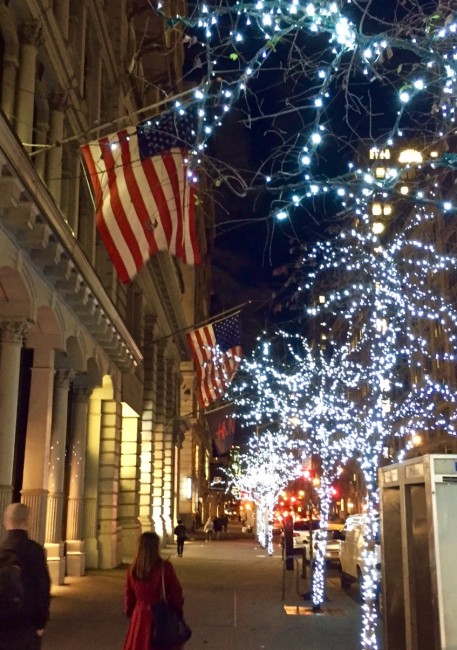 It felt great to be back in New York. I love the vibe, the enthusiasm and above all, the friendliness I always equate with this city.  We walked back to the Chelsea Pines Inn.  However, before settling in for the night, we did feel a slight twinge of sadness. 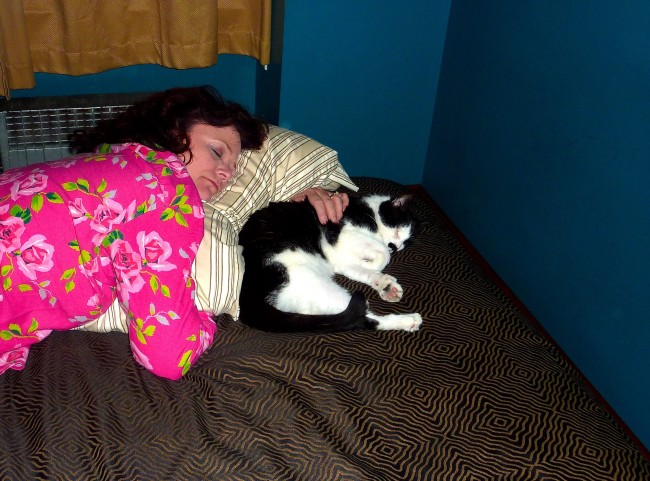 The last time we visited, the house cat (the inimitable Charlie Chaplin) actually spent one of the nights with us (a long catnap).  A few months ago, Charlie passed away. 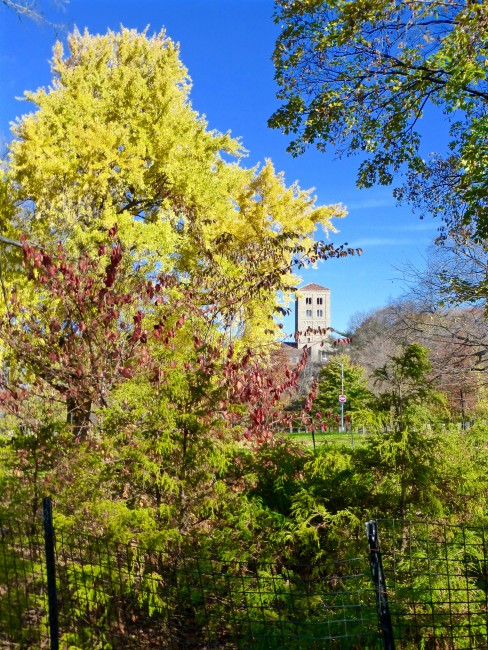 Tomorrow, we’d head out from the city to a museum that was #1 on my list of places to visit on this journey. We’d also call on a little known Saint and a house where such historical figures as George Washington, Thomas Jefferson, John Adams, Alexander Hamilton and Aaron Burr hung out, and follow that up checking out some bones and stuffed animals. I would also make my first (of many) subway errors.