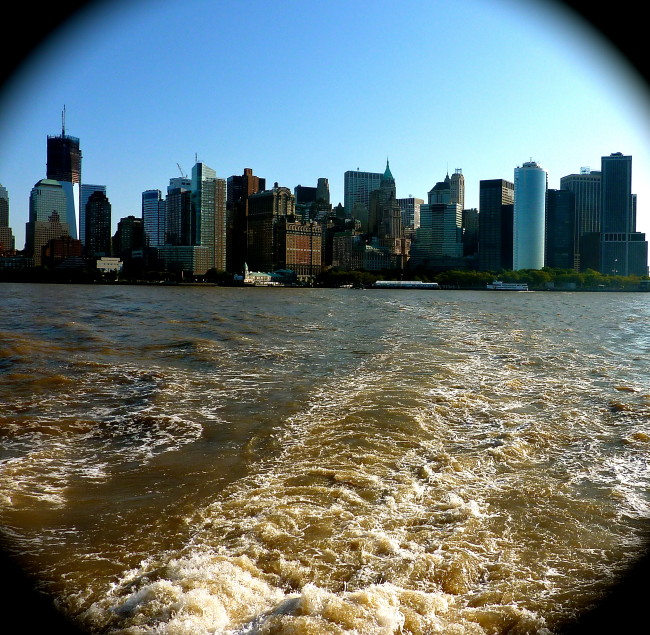 Finally! The New York City trip we were supposed to enjoy last Fall (before that pesky “near death” thing interfered with our plans) was going to actually take place. Nine months of grueling physical therapy behind me, I felt cautiously optimistic that I would not succumb to the 1,000 Stairs-A-Day regimen we had been accustomed in our previous travels. After last year’s pulmonary problems (didn’t look too good here), I had been given a clear bill of health.

Tracy and I would fly from Los Angeles while our traveling partners in crime, Kim and Mary, would fly in from San Diego. 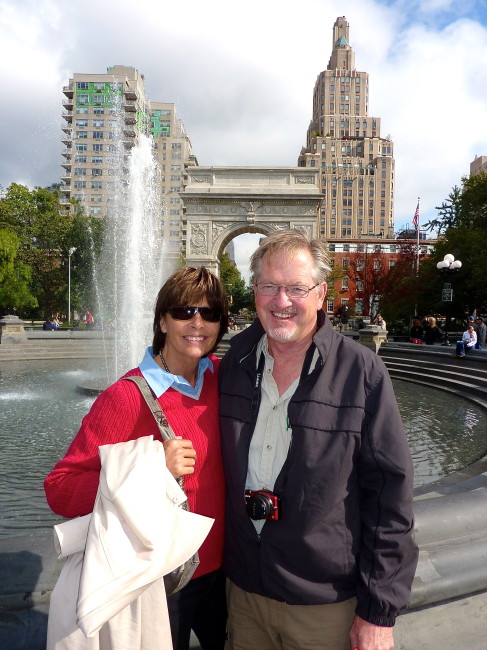 In the early evening, the four of us would rendezvous at our NYC hotel and begin another in our never-ending series of misadventures.

Unlike many of our journeys, there were no last minute health concerns.  I now refrain from trimming my toenails the week before a trip in order not to replicate the “infected toe saga of 2008,” which is good for my toes, but bad for Tracy who has to wear protective leg armor at night on vacation to protect her from my stiletto-like nails.

Packed and ready to go with a Kim-prepared spreadsheet of 1,000 sights to see over the next six days, Tracy and I climbed into bed early. As she shut off the light, Tracy leaned over to me and whispered, “You know, last year at this time your friends and I really thought you might die.” 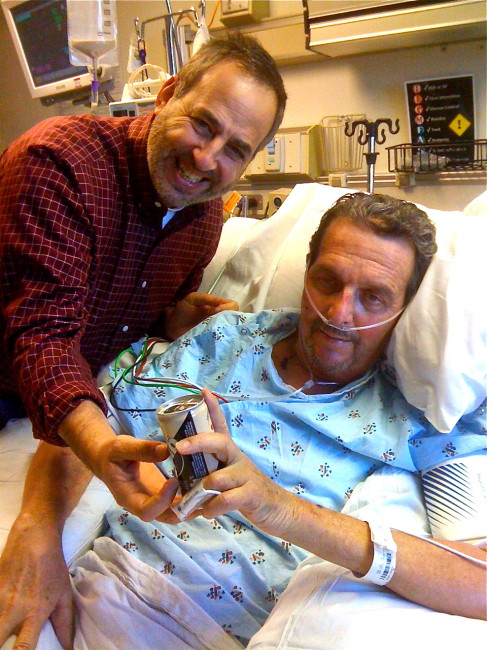 I said, “Give me a few days in New York. It might still happen.”

Day One – Like A Virgin, Strangers On A Plane, Staying In The Pines, Four’s Company and Tracy’s “Charlie Chaplin Affair” 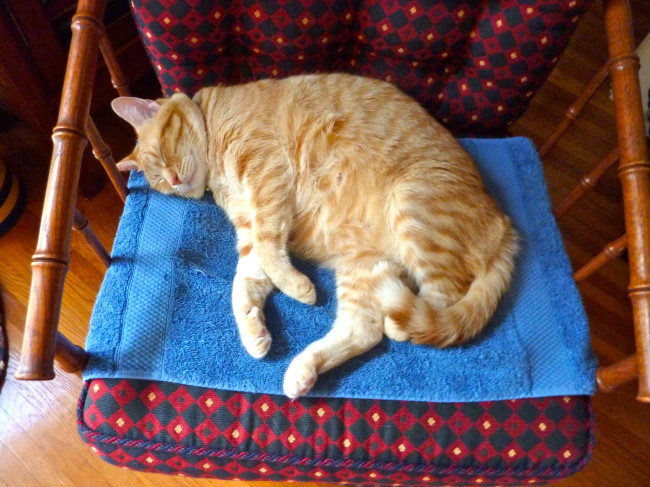 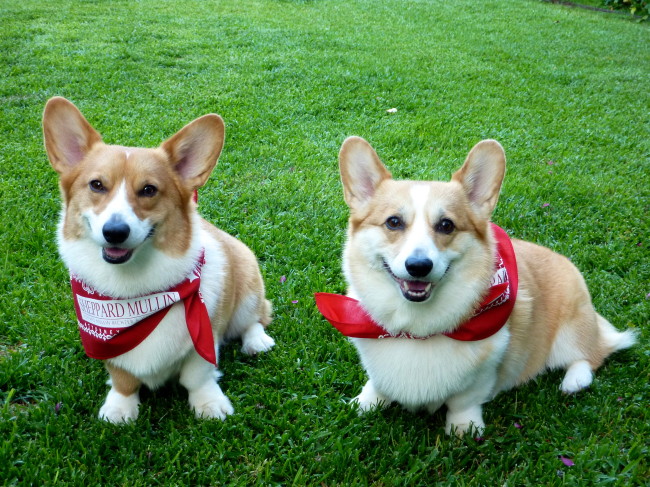 …knew we were up to no good when the 3:30 a.m. alarm awoke the family.  We had hired a pet sitter to stay at the house in our absence, so Tracy spent the morning leaving various post-it notes around the house, while I loaded up on copious amounts of caffeine.

This was our first experience with Virgin American as our carrier. On board they had television screens at every seat, so that was a plus. Unfortunately, the only news event of the day was the Amanda Knox verdict, which got tiring by the time we were taxing on the tarmac.

To me, a successful flight is a safe take-off and landing. We, of course, had just that, but not without a little bit of drama about 2/3 of the way through the flight.

I walked to the back of the plane to alleviate my body of the various lattes and coffees I had been drinking throughout the day to keep me awake. Standing near the lavatories were a male flight attendant who was gesticulating to a male passenger who seemed more than a tad bit perturbed, a woman who looked like she would like to be anywhere else on the planet and, of course, now me.

The flight attendant was pretty calm and said to the passenger, “Hey, you’re making way more out of this than it is. Just calm down.” The miffed passenger, however, kept berating the FA. No matter what the FA said to try and shut the guy up (he kept his cool and was polite), the guy just would not let it go. Being the snoop that I am, when it was the angry passenger’s turn to use the bathroom, I asked the FA what the hell was going on.

It seems the passenger went to the back of the plane and kept pushing on the emergency door. Not wearing any type of D.B. Cooper parachute, the FA frowned on that type of behavior and told the guy it’s not proper airplane etiquette to push on the emergency exit door at 36,000 feet.

He said the guy went off on him when he told him to please refrain from such activity.

When the guy finally went back to his seat he stood in the aisle for about ten minutes just staring back at the FA. I’m surprised he just didn’t pee right there in the aisle to mark his territory, but he finally sat down, and soon we were landing at JFK in one piece.

Arriving at JFK at 4 p.m. is not the best of all plans, and hitting rush hour traffic our cab did not make it to our residence for the next six nights, the Chelsea Pines Inn, until about six ($45 + tip). Mary texted us that their plane had landed at LaGuardia, and they were about an hour or so behind us. 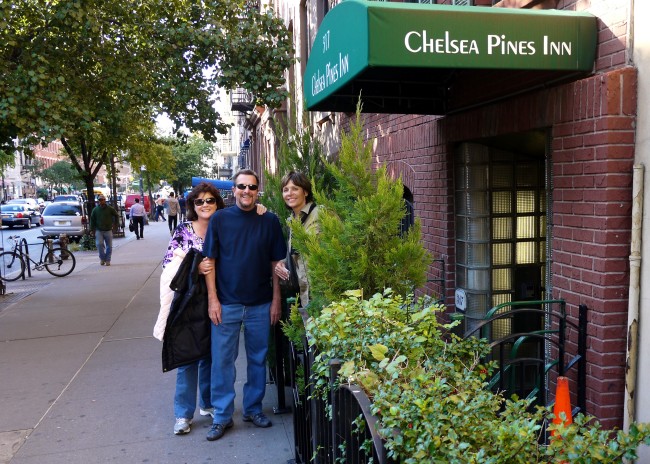 The Chelsea Pines had been wonderful last year when we had to make last minute cancellations to our trip thanks to my 3½-month hospital vacation, and we promised that if I lived we would definitely stay there when we made it to New York.

Since I made a vow in the hospital to keep at least 75% of my promises, we booked the Chelsea Pines again when we were confident I wouldn’t have to be spending eternity in another type of pine residence.

Ranked #8 in Trip Advisor and with a price tag that was well within reason for a strategically-positioned locale in New York City, the Chelsea Pines reminded us of numerous of the places we have stayed on our trips to Europe. 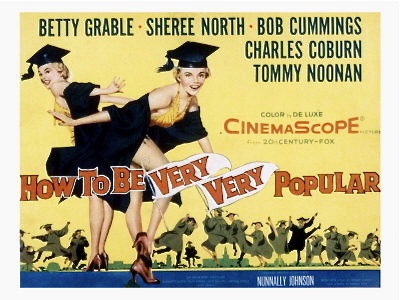 Our room was on the second floor (no elevators, but the staff is more than willing to help with your bags if you need it). There are movie posters everywhere in the Inn, and we stayed in the Sheree North room, which obviously had posters from her numerous movies. It also meant that I had to google Sheree North so I could learn more about this actress (hey, it is her room).

The room was ample enough with a small bathroom and separate shower that actually faced in to the bedroom. Kim and Mary had a more normal setup for their bedroom/bathroom situation (they were on the third floor), but this place lived up to everything I want in a place I stay. 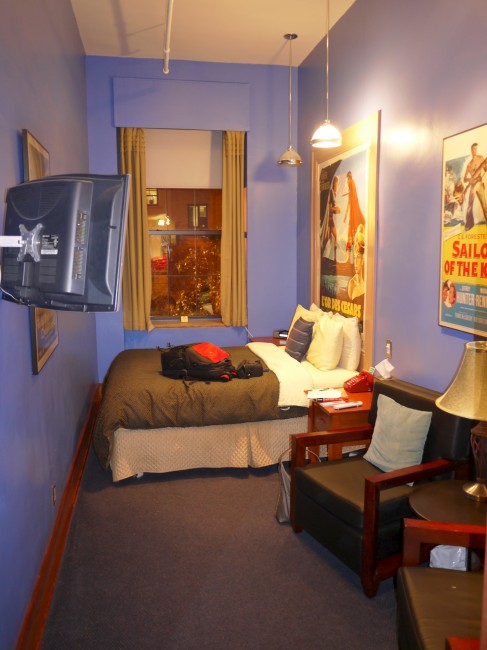 It was quiet at night. The shower stayed hot (which was great for my aching body after our long days of traipsing all over the city), the staff was beyond nice, the breakfast area (with outdoor patio seating in nice weather) was a great place to meet other guests whether at breakfast or grabbing a quick cookie for extra energy during the day.

By the time Tracy and I had zipped to the corner CVS pharmacy for some sundries and then showered, Kim and Mary arrived, and we soon hit the pavement in search of nourishment.  After a long day of flying, the four of us agreed on pizza for dinner, so we walked to Co. (pronounced “Company”), a Chelsea pizzeria located at 230 Ninth Avenue (at 24th). 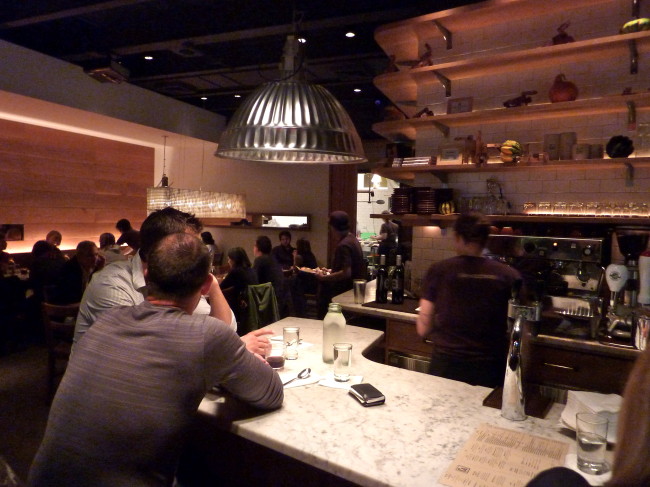 It is a hip, modern little spot that has both private and communal tables, and the place was packed when we walked inside. There was a slight wait (about 15 minutes) at 9 p.m., so we bought a bottle of vino to toast both our fortune to be in NYC and to my fortune of being alive. Yes, life is good! 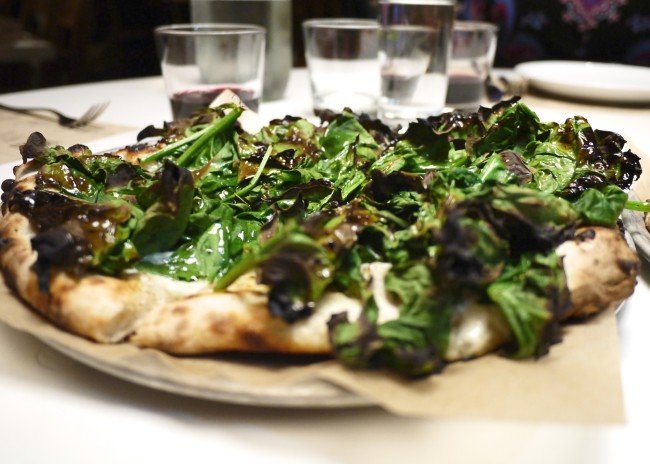 And so was the pizza!  Co. specializes in Roman-style pizza with thin crusts and lots of flavor. Tracy and Mary both started with the Ribollita (tomato, savoy cabbage, cavolo nero, cannelloni beans, parmesan, mirepoix and chili) for seven bucks. 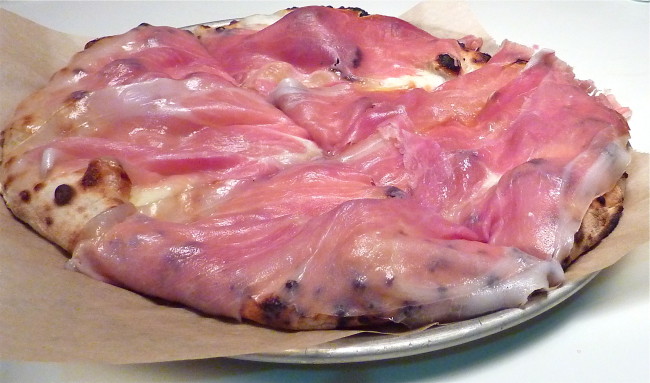 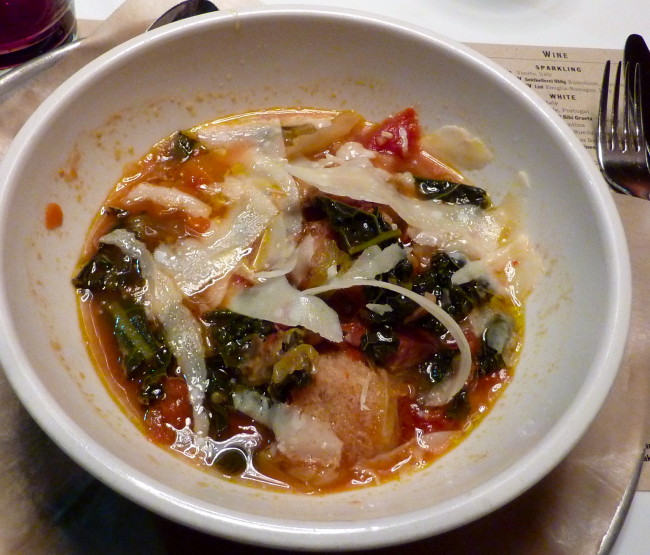 The pizzas were both delicious and the crusts were “light as air.” They did overcharge us by $30, but Mary (our own personal restaurant bill savant) caught the error, so no harm done.

Walking back through Chelsea, we saw a lot of interesting restaurants that we decided we would check out during our stay. We found this area to be a terrific base of operations during our stay in NYC. 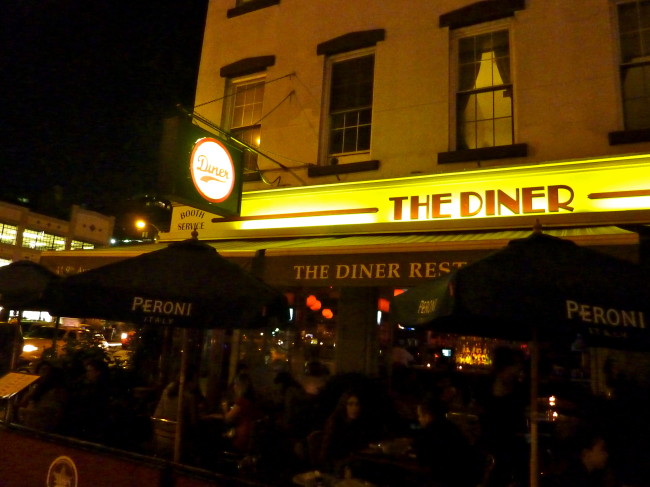 Back at the hotel, Tracy spied someone meandering through the hallway who immediately caught her eye. “Did you see that cutie with a little mustache?” she asked.

Before I could be jealous or answer her question, there he was again, this time pretending I wasn’t even there and rubbing himself against Tracy. “You must be Charlie Chaplin,” Tracy said. 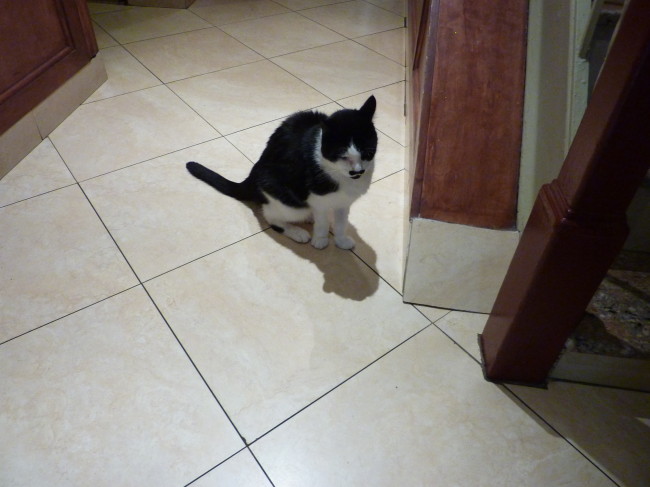 Sure enough, it was the Chelsea Pines resident Casanova cat, the inimitable and dapper Charlie Chaplin, complete with requisite mustache. Obviously, Charlie knows a cat person when he sees one. He followed us to the second floor, and after closing our door Tracy asked, “I wonder if he ever sleeps in the rooms?”

We would find out later in the week, but on this night it was time to get some rest. Tomorrow my nine months of physical therapy would be put to its first real test. As Tracy had said the previous night, last year at this time I was nearly dead. It was now time to for me to prove to myself that I had made it all the way back. The first full day, as I would discover, would provide a good barometer to see if all that hard work had paid off.